For our latest mission, a musical breaks out at the GEL Conference in New York. A speaker is suddenly interrupted by a man who refuses to turn off his cell phone. This is the fourth in our series of Spontaneous Musical projects. Enjoy the video first and then go behind the scenes with our report below.

I’ve been involved with the Gel Conference since speaking there in 2005. Gel is an annual conference exploring good experience in all its forms – in art, business, technology, society, and life. There are always fabulous speakers, and it’s always a great time. This year, I asked founder Mark Hurst if he’d be open to Improv Everywhere staging a surprise musical at Gel. He immediately agreed. 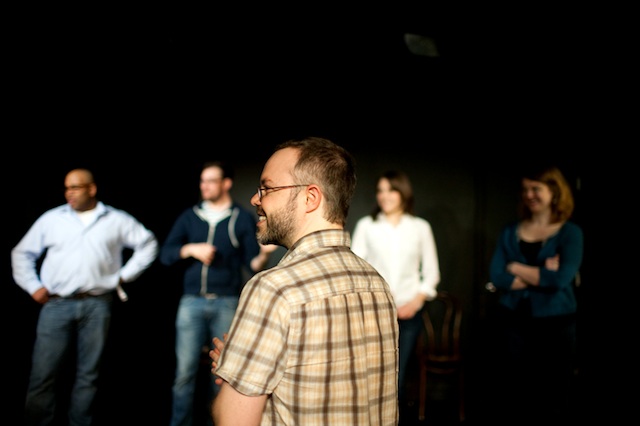 Agent Brown working with the cast
The first step was to create the song, and as usual I turned to the wonderfully talented Scott Brown and Anthony King. We brainstormed over lunch and decided a song that parodied social media oversharing would be a great fit for the audience we’d have at the conference. 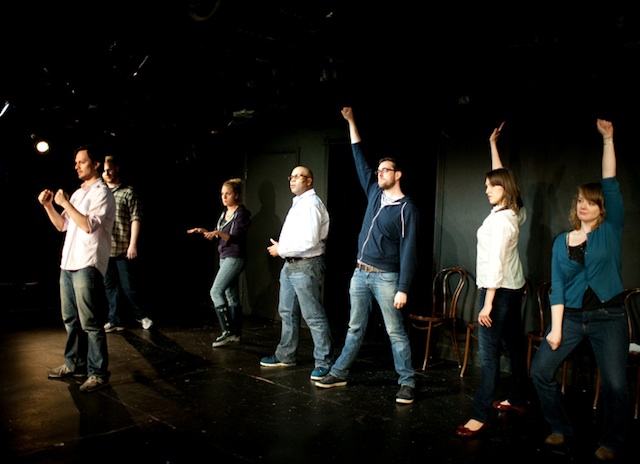 Rehearsing with the seven principle cast members at the UCB Theatre 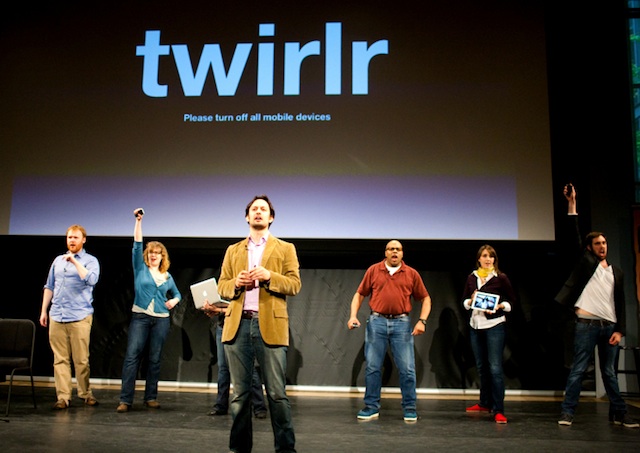 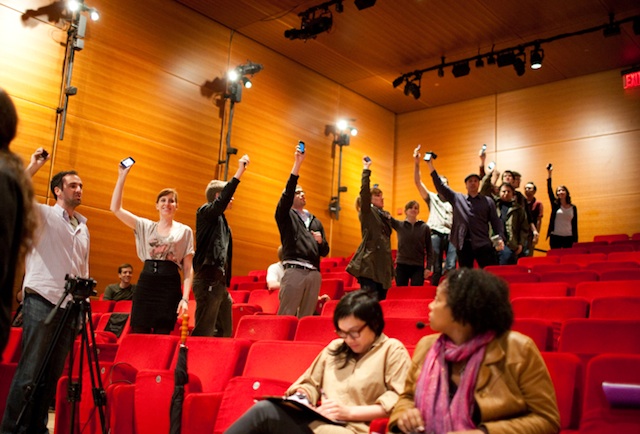 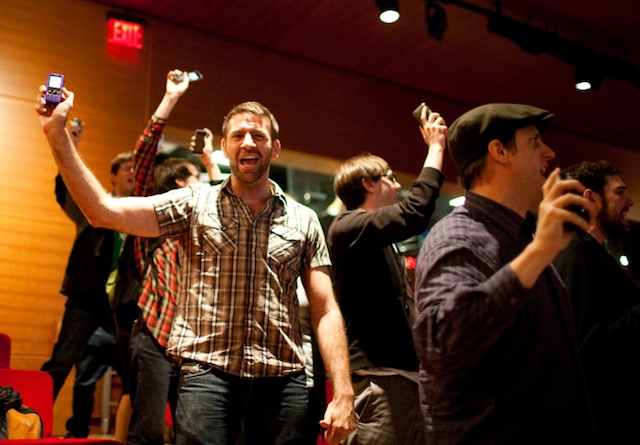 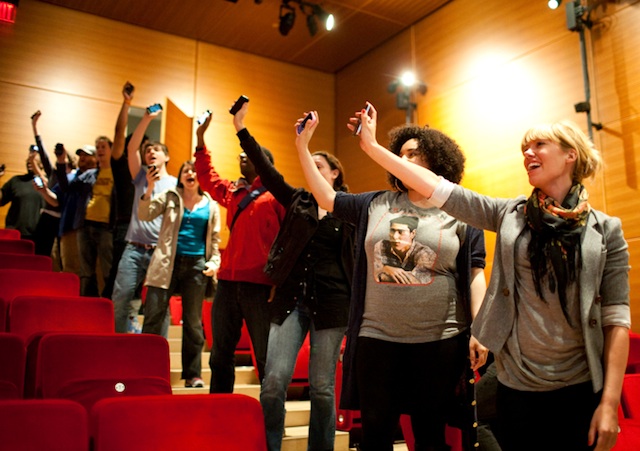 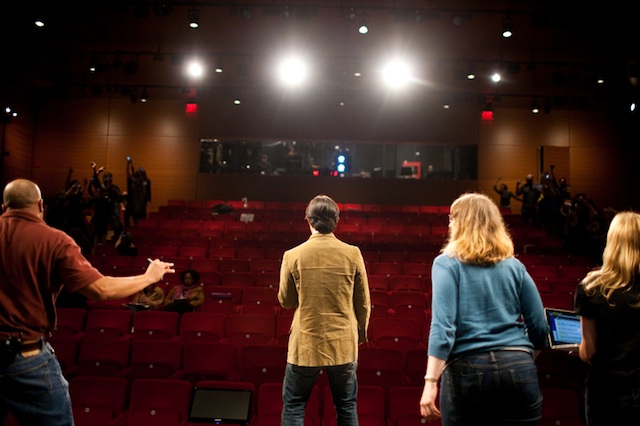 The stakes were high for this musical, as we only had one shot. For our past three musicals, we were able to stage them multiple times throughout the day with a new audience each time. We would only have one chance to surprise the conference audience. If an actor forgot a cue or a microphone failed to work, there would be no second chance to fix it. 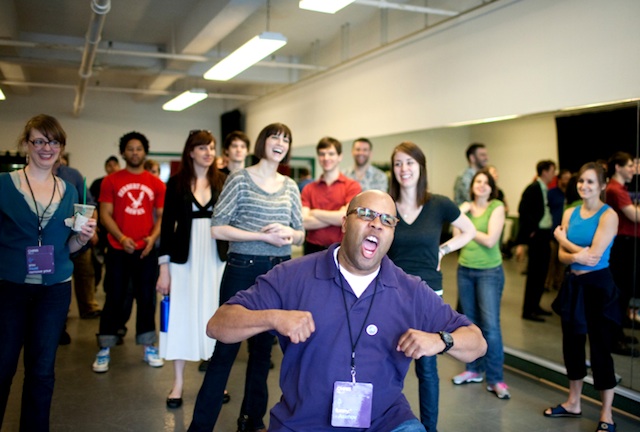 Agent Free hams it up in rehearsal
We had one final rehearsal at a studio near the conference the day of the mission. 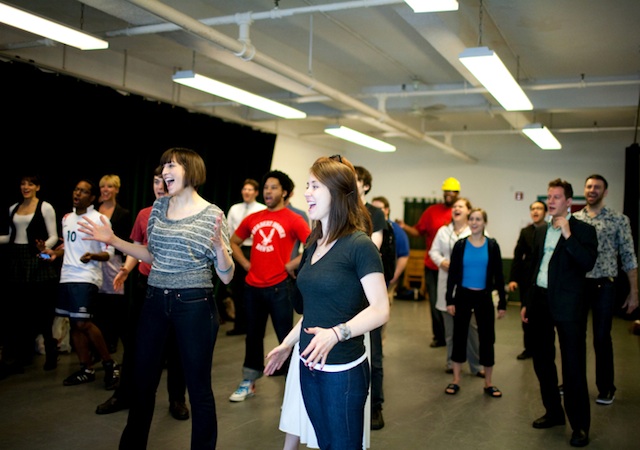 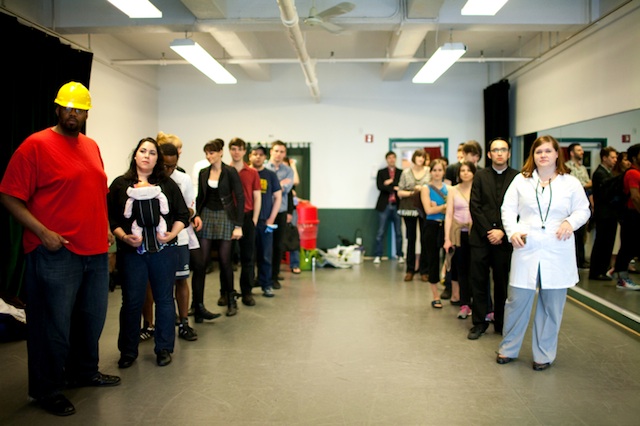 We had a 29-member chorus, and I encouraged them to make fun character choices. We had a priest, a doctor, a construction worker, a bike messenger, and a new mother, among others. 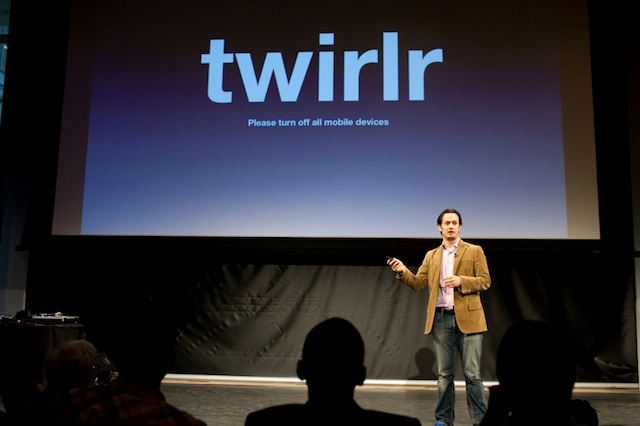 Finally, it was time to make it happen. Agent Hurst introduced Agent Kayne who began to do a fake presentation on a fake new social media service, twirlr. 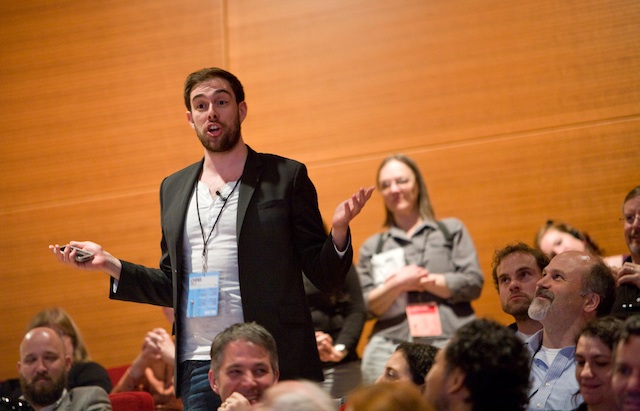 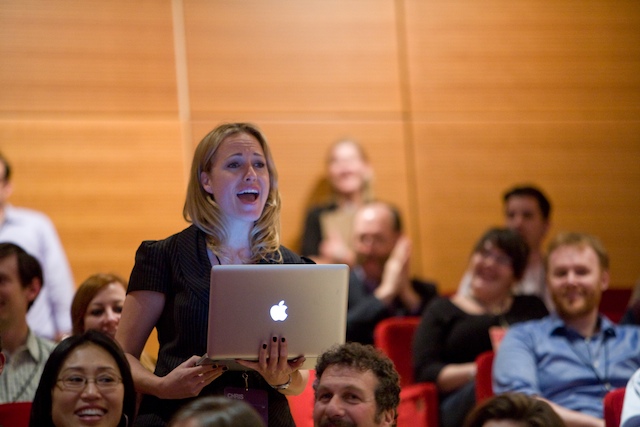 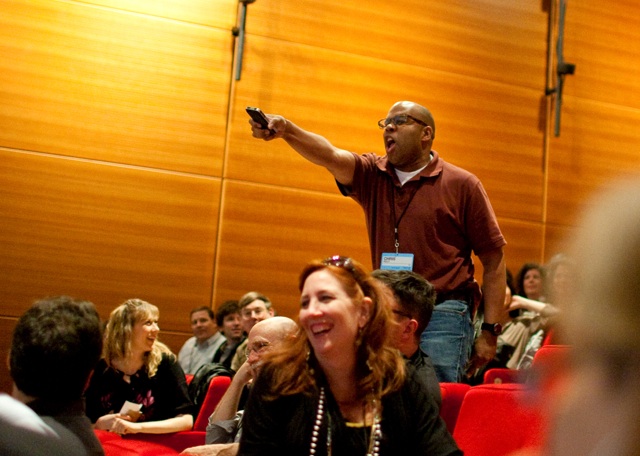 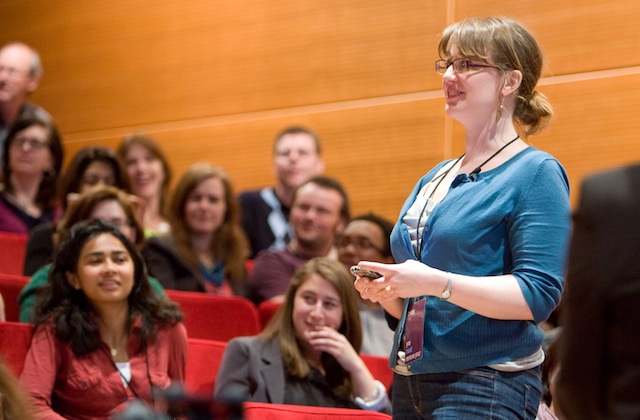 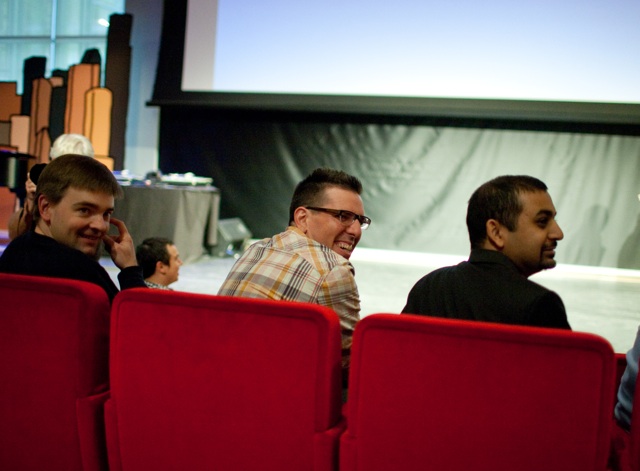 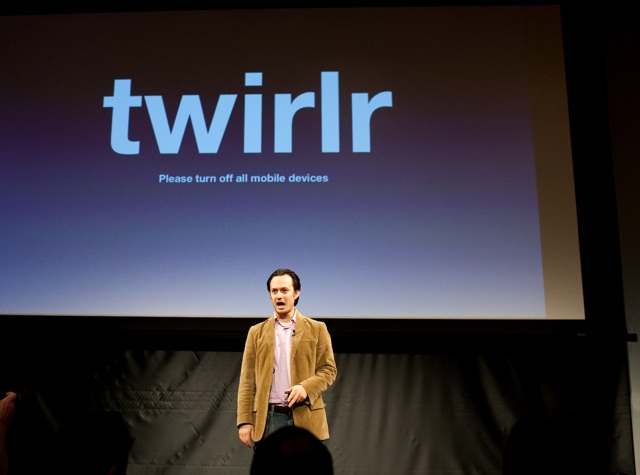 Agent Kayne acted like the musical outburst was as much a surprise to him as it was to anyone else, looking on in disbelief. Then he brought the house down when he started singing as well. 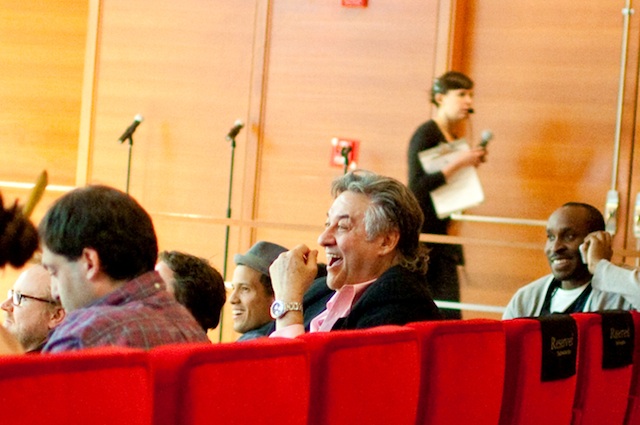 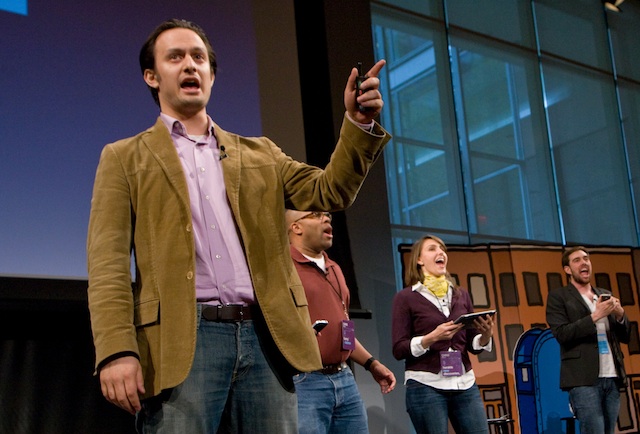 For the finale, the actors all joined Agent Kayne on stage as our 29-member chorus suddenly streamed down both of the aisles. 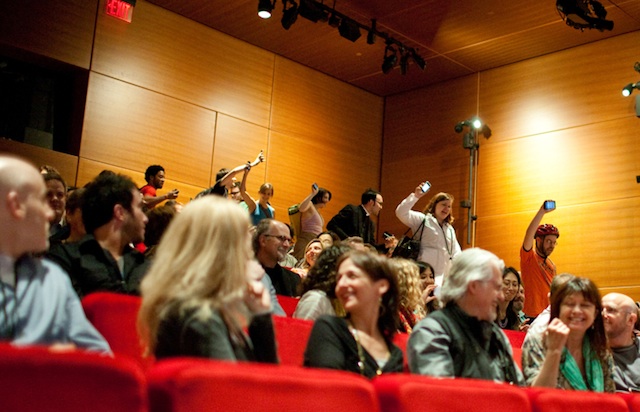 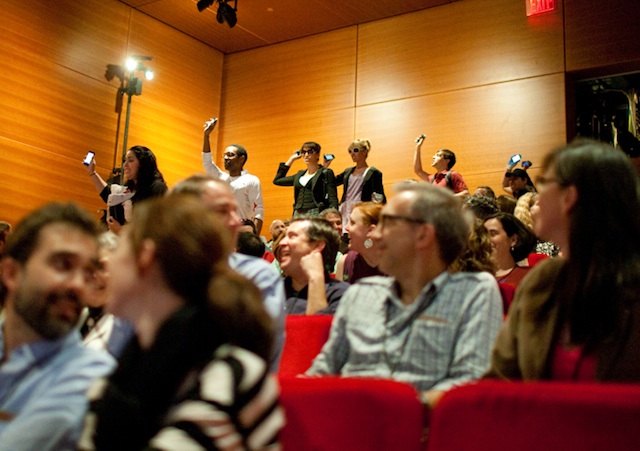 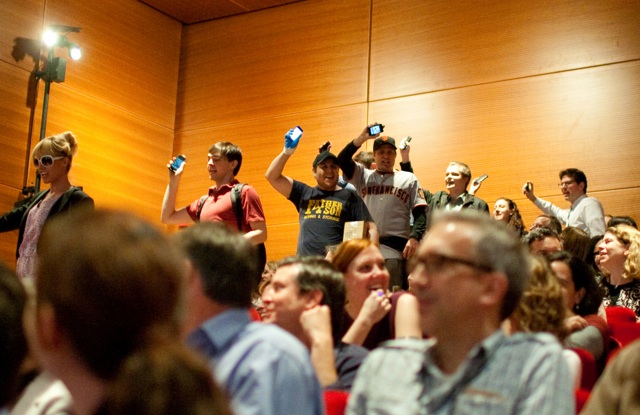 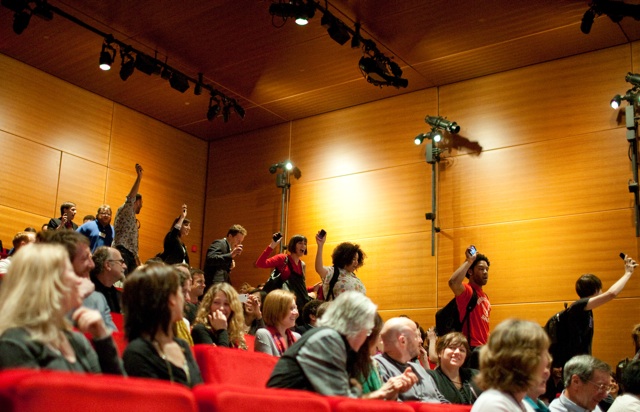 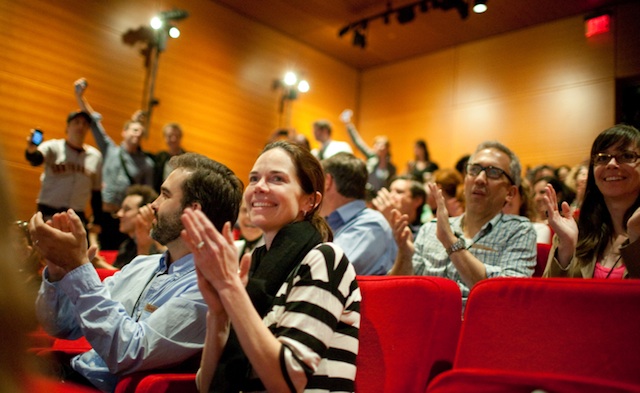 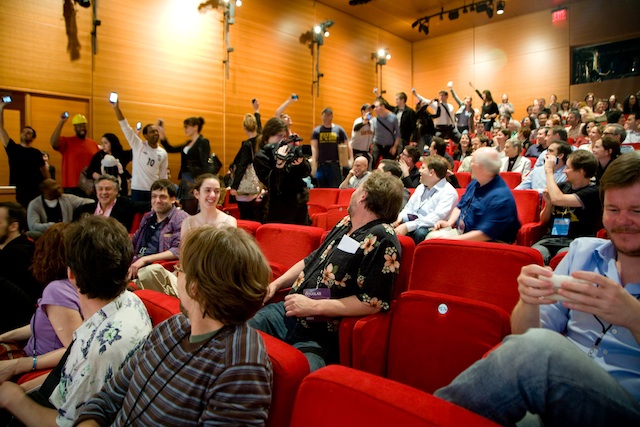 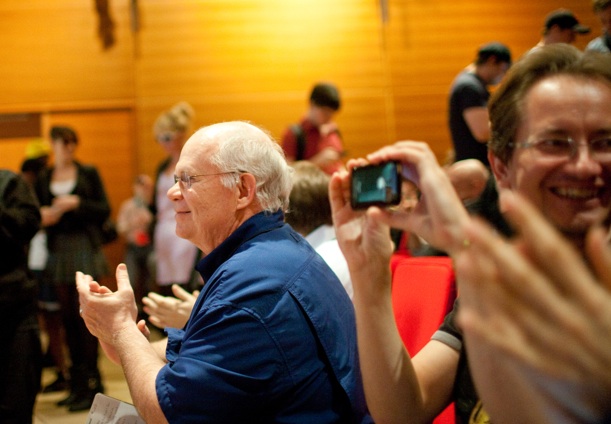 After the song ended, the entire cast filed out of the theatre matter-of-factly, checking their mobile devices. 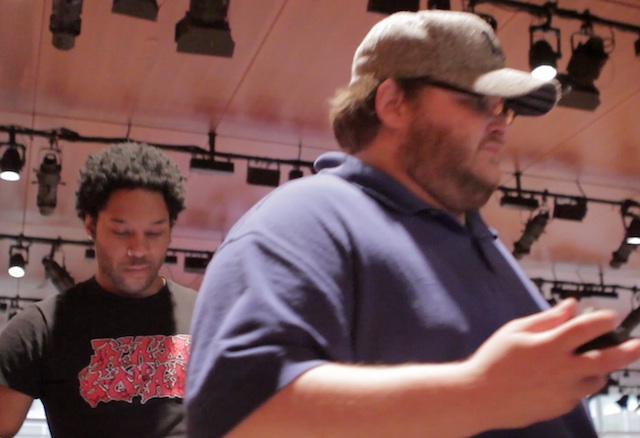 Agent Fernandez and Agent Finch leaving the theatre
I was especially excited to have Agent Finch from Ghosts of Pasha in the cast. He hilariously dressed like a Best Buy employee with a fake yellow name tag. 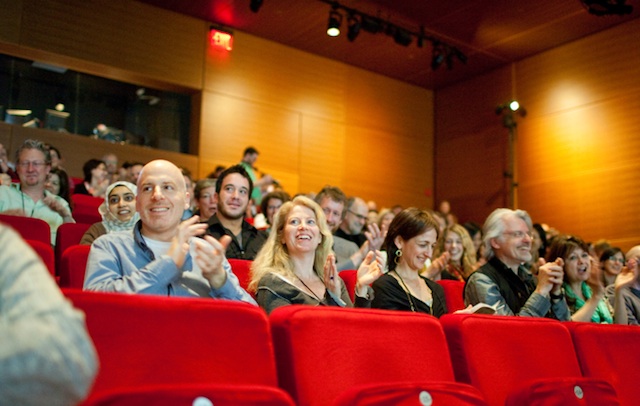 After the cast left, Agent Kayne was alone on stage. He announced his time was up and got another round of applause as the audience realized “twirlr” was completely fake.

If you’d like to hire us to stage a surprise musical prank at your conference, please get in touch!