For our latest mission, thousands of people followed secret, synchronized instructions delivered via headphones in Manhattan’s Meatpacking District. The crowd of around 2,000 people blended in on the sidewalks surrounding West 13th and Gansevoort Streets. The app-powered audio started playing at exactly 8:30 PM, just as the sun was setting.

After surprising random strangers in the area with their synchronized movements, participants took over the car-free Open Streets for games like freeze tag and Human Frogger. The two groups eventually converged on the Little West 12th Open Street for a massive game of dodgeball and an epic dance party finale.

This was all part of our seventeenth annual Mp3 Experiment event, returning for the first time since 2019.

A huge thanks to the amazing community of people that come out to be a part of this event every year. We’re so proud of what a diverse, joyful celebration the Mp3 Experiment has become. As silly as the project is, it’s life-affirming to be in a crowd of strangers, all smiling, laughing, and supporting each other, especially after the past couple of years.

If you’re new, be sure to join our email list to be the first to hear details for next year’s event. We also have an NYC Mp3 Experiment Facebook group you can join. We support this free event by touring it to schools, festivals, and conferences around the world. If you want to hire us to stage one for your organization, get in touch.

Here is a link to the full gallery of photos taken by our photographer Ari Scott, and you can find a few shots below. Please credit Ari if you use any of these on social media: @ariscottphoto

The event was produced in partnership with Make Music New York, Festival of New York, and the Meatpacking BID. 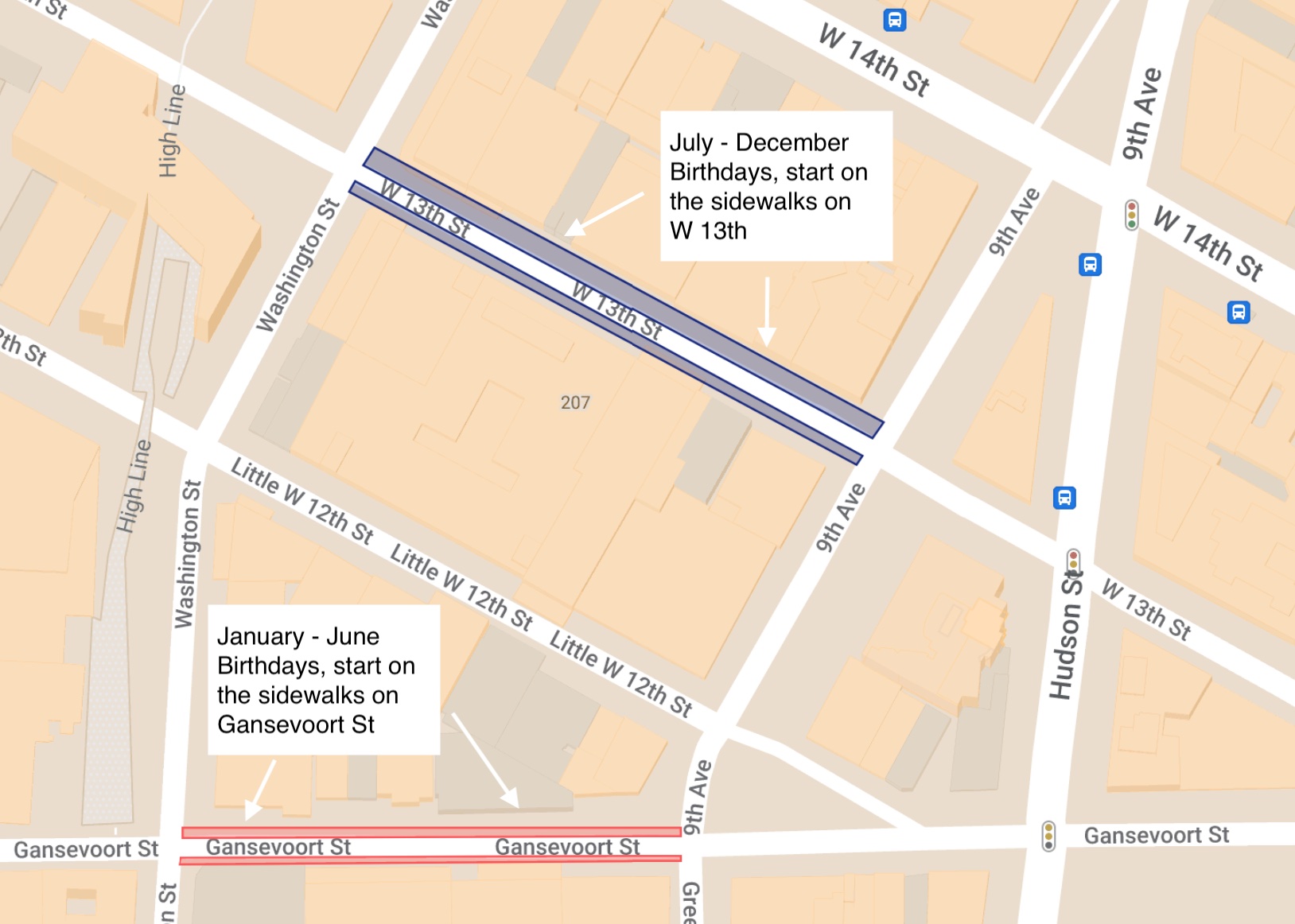 Participants started out on two separate blocks based on their birthdays. 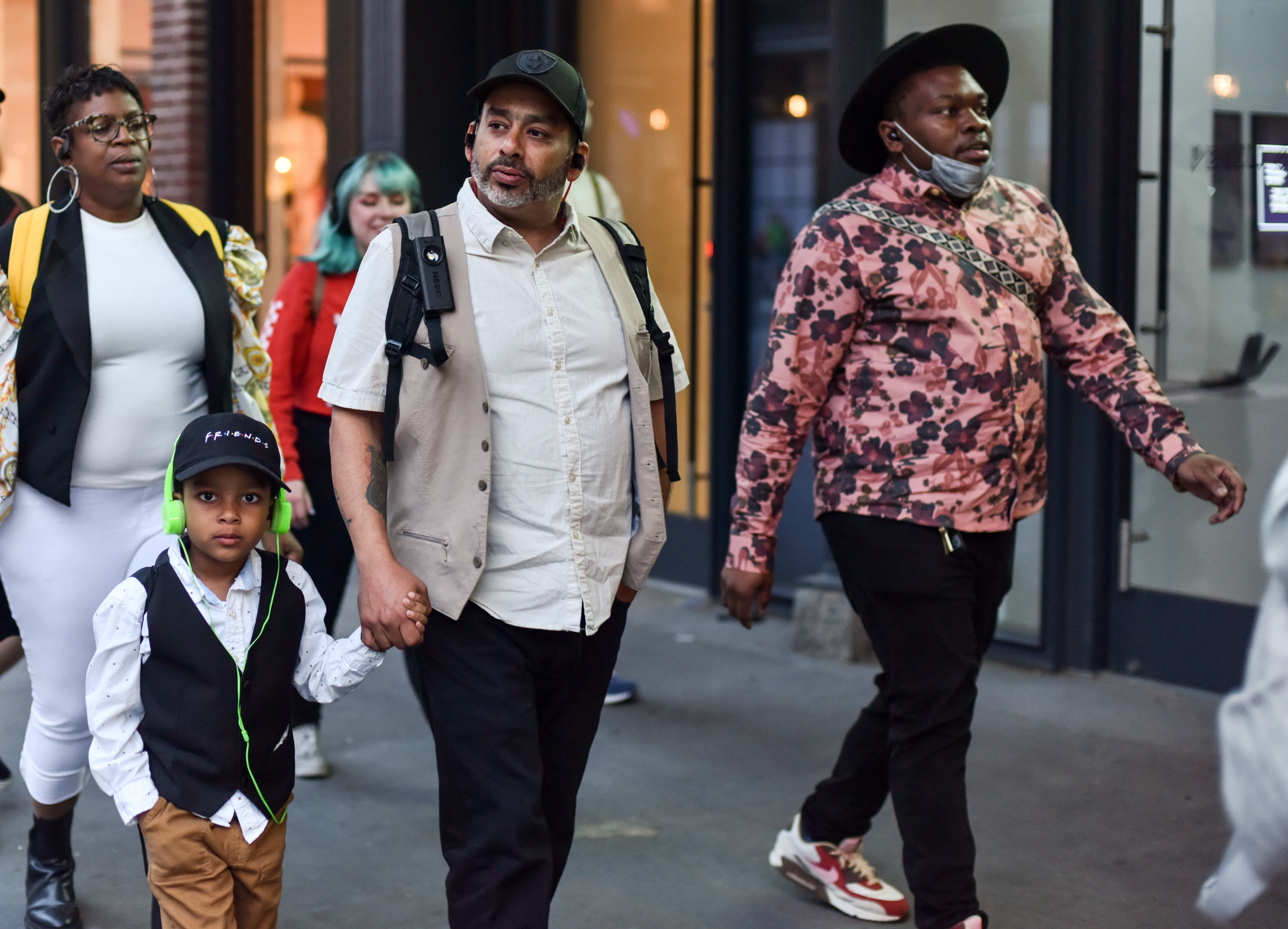 Participants blended in on the sidewalks as the event starts. 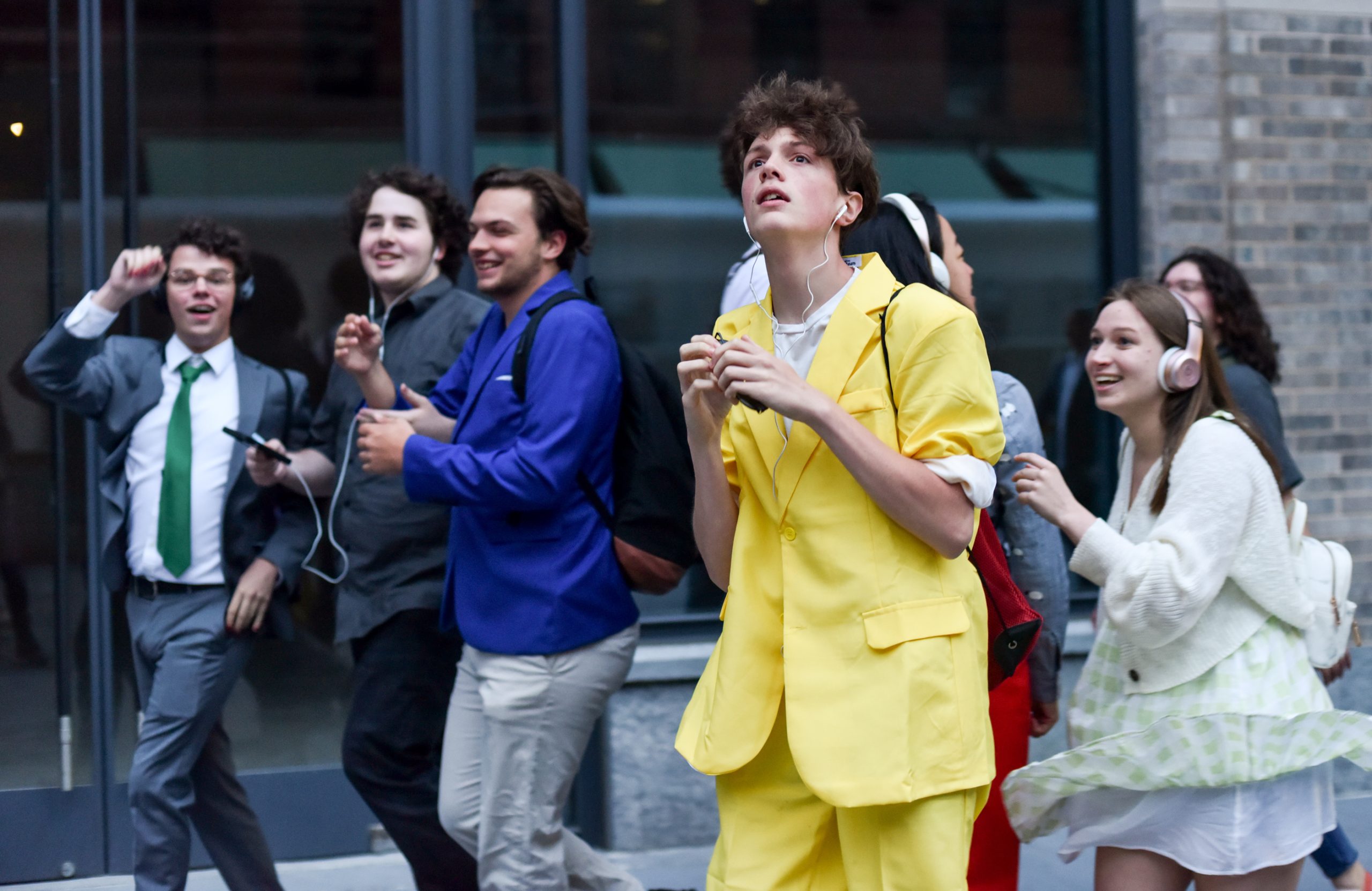 Everyone was told to “dress to impress” since the Meatpacking District is known for its night clubs. 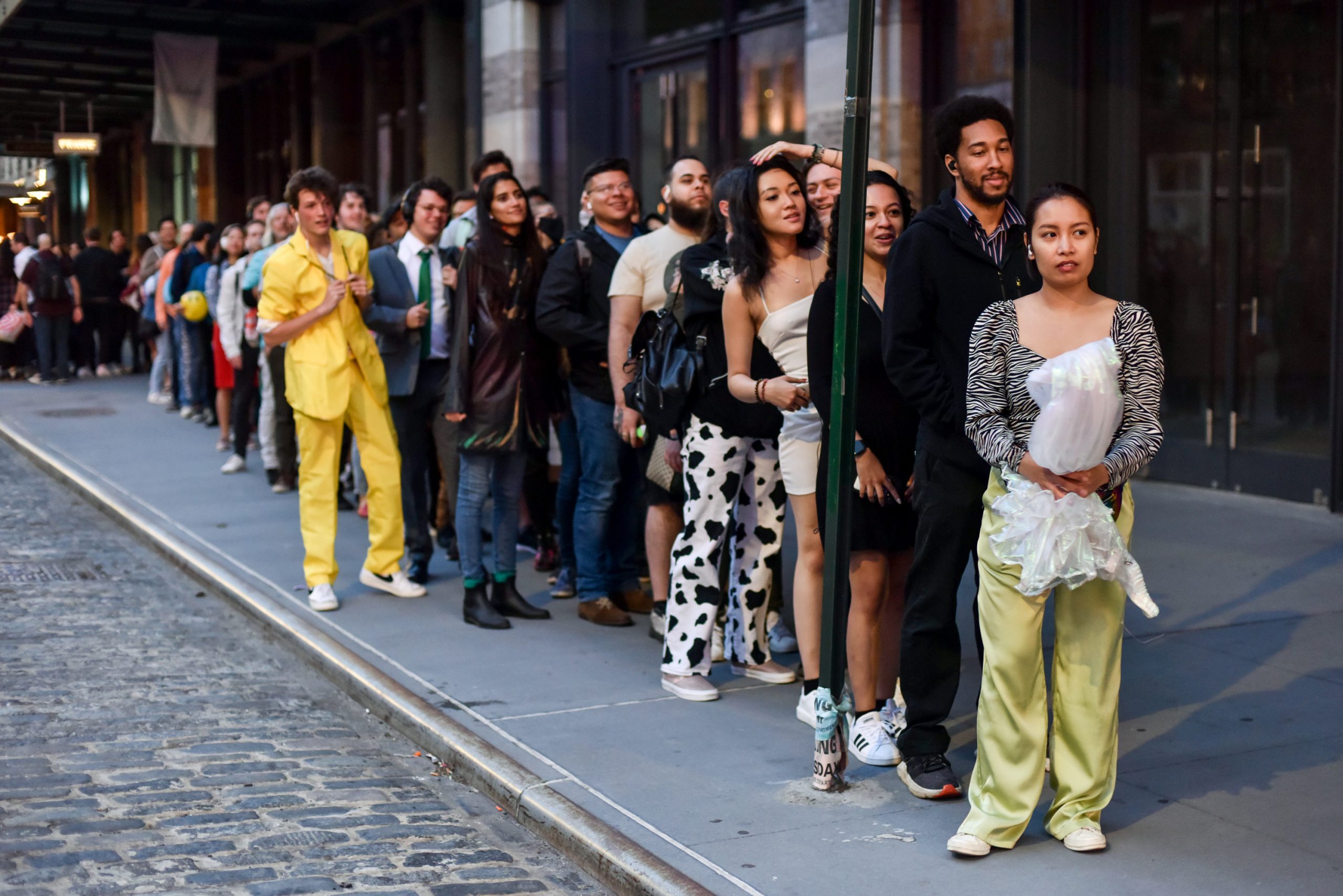 Since the area often has long lines outside of clubs, participants were told to make long lines behind street signs, fire hydrants, and parking meters. 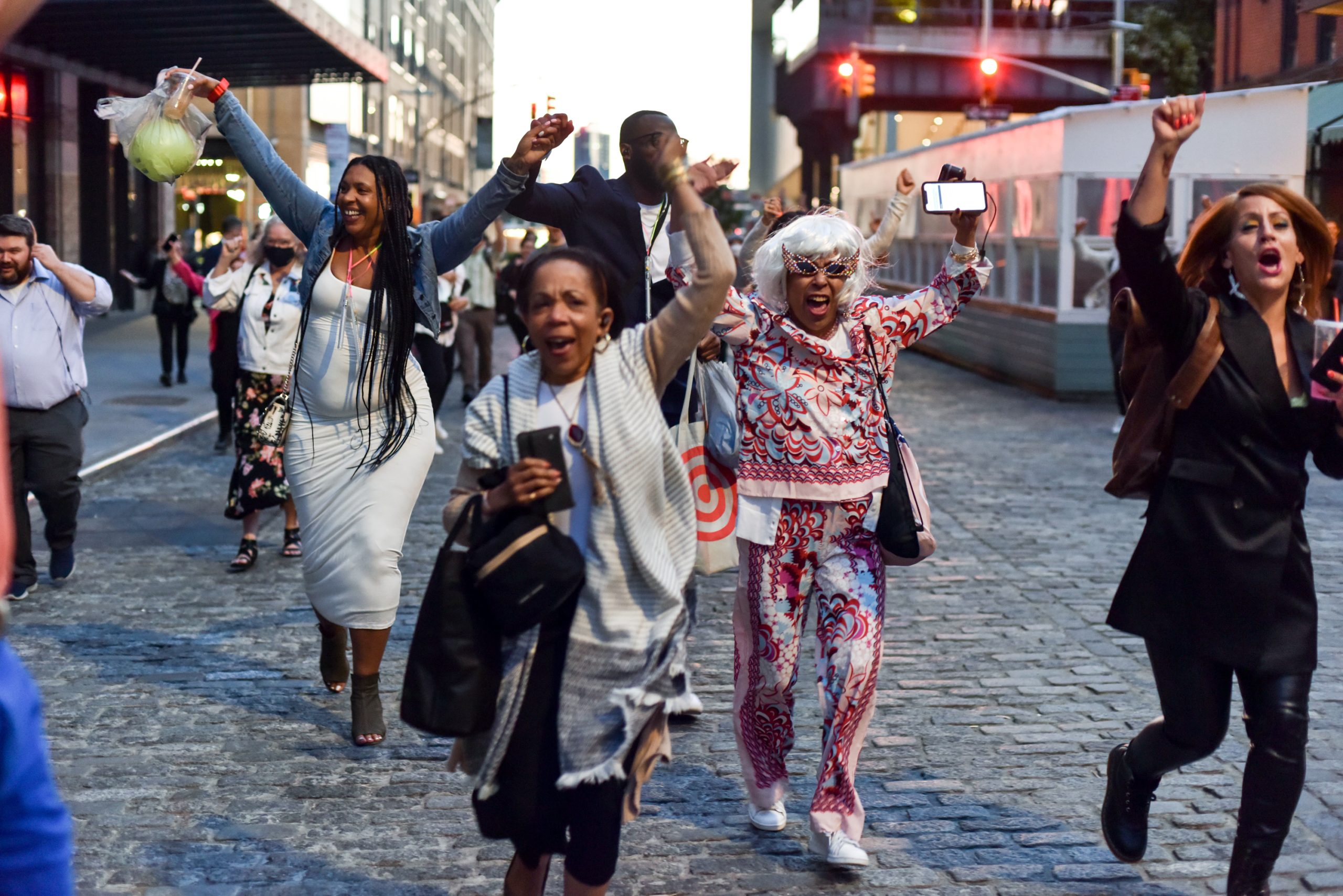 Participants rush out into the cobblestone street. The three streets used for this event are all Open Streets, where motor vehicles are not allowed. Since the pandemic began, New York City has taken spaces away from vehicles and given them back to people. It was fun to be able to celebrate this! 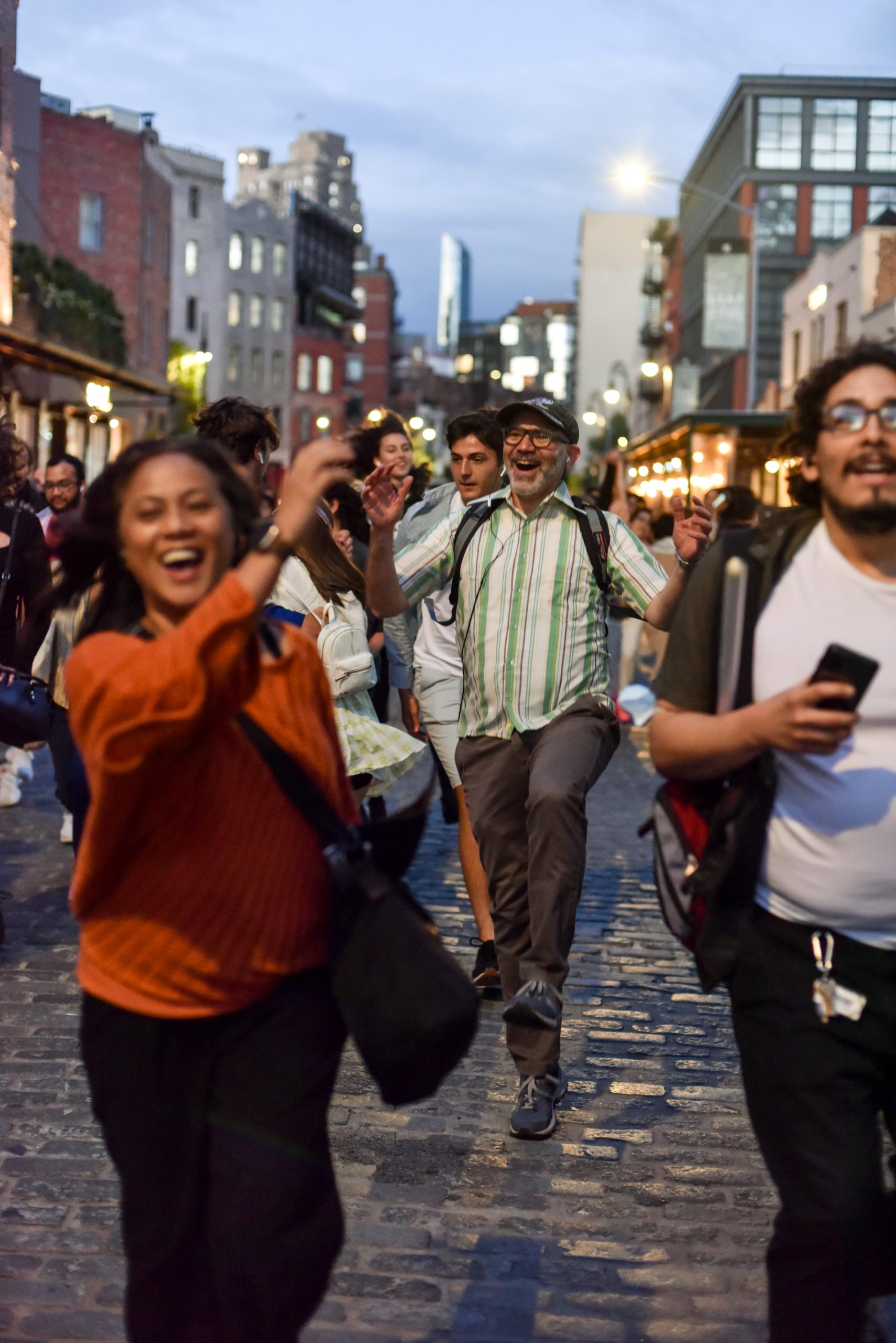 Skipping through the street during the “movie simulator” portion of the event. 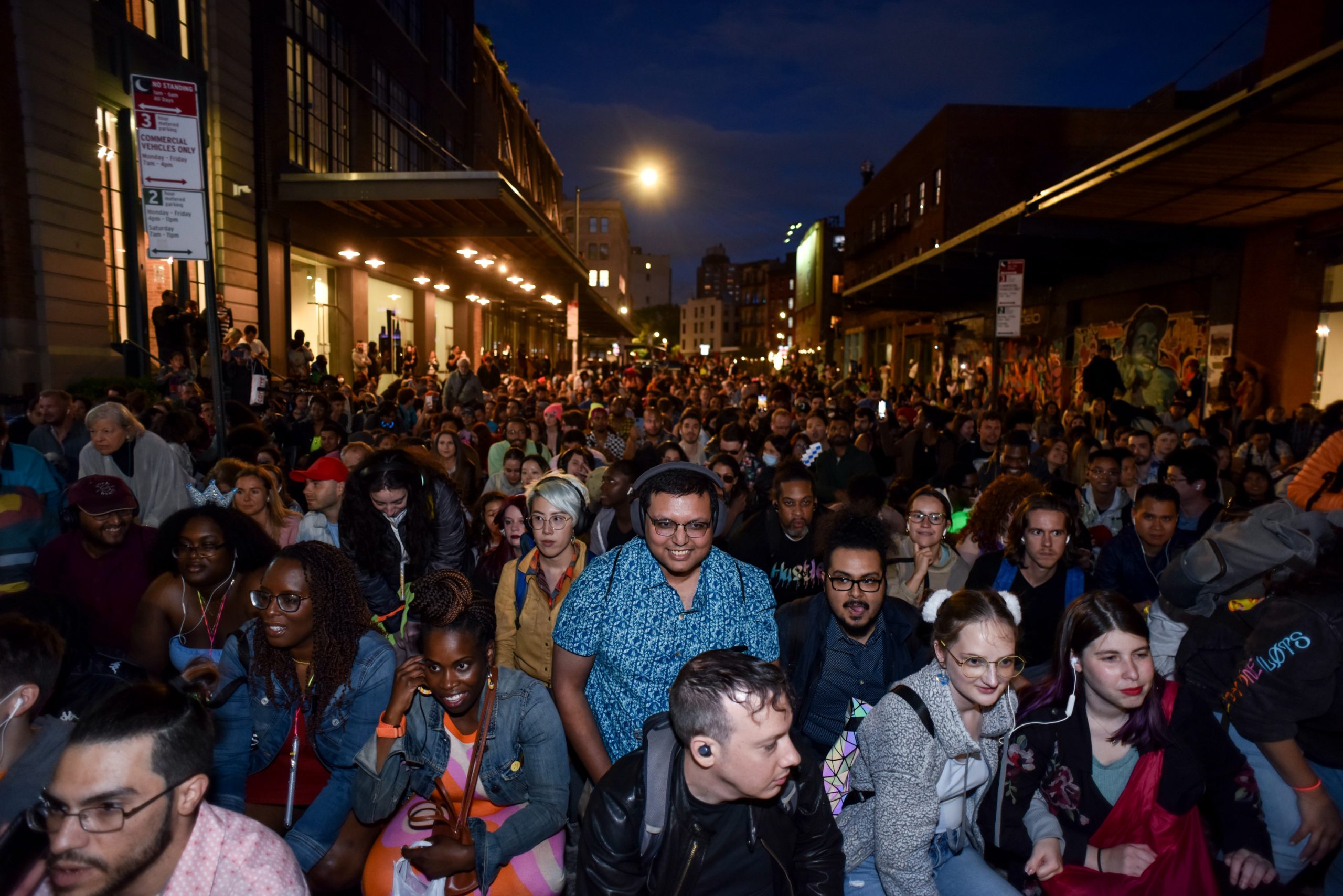 Both groups converged on Little West 12th Street. After a dodgeball game, we created a giant wave down the entire street. 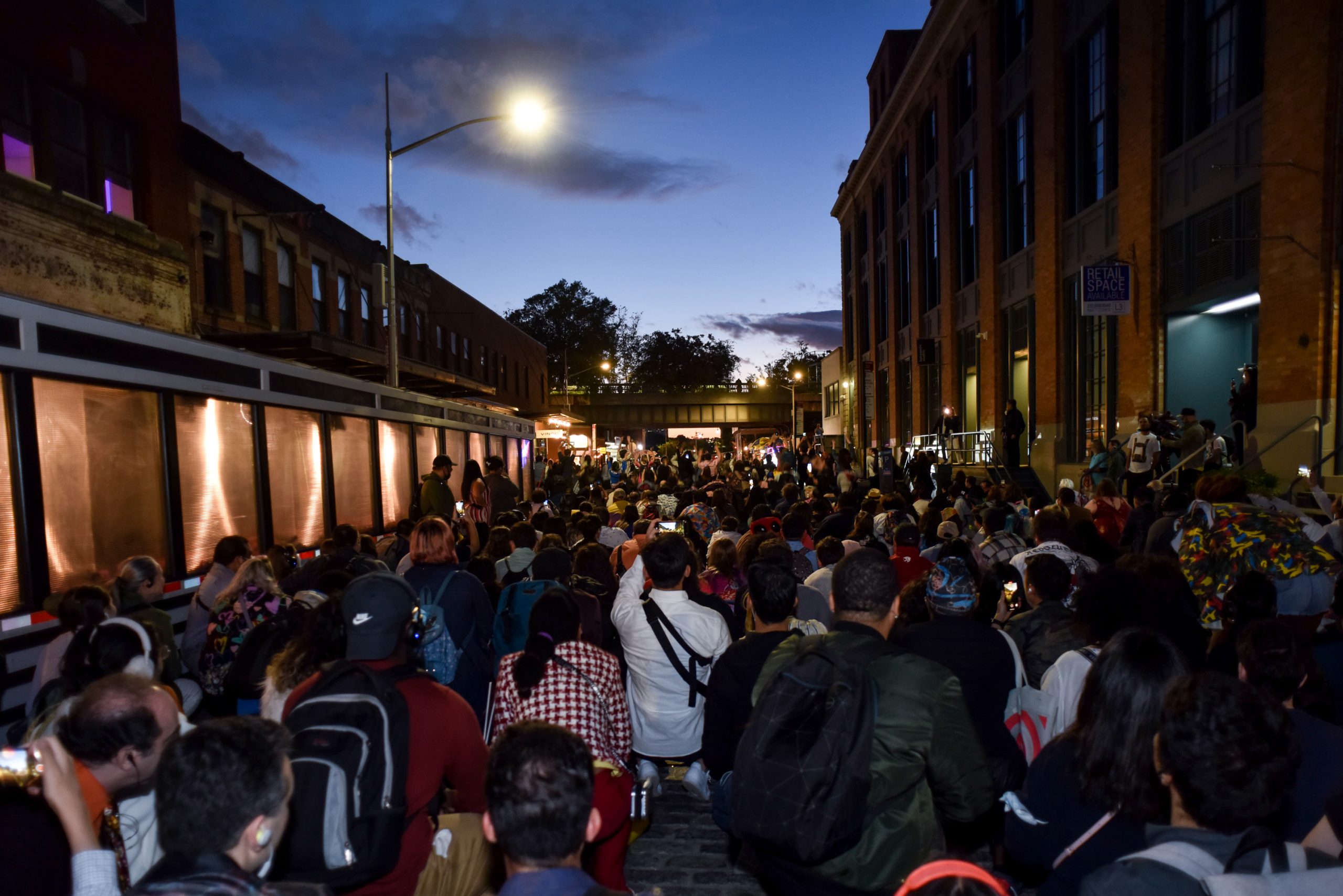 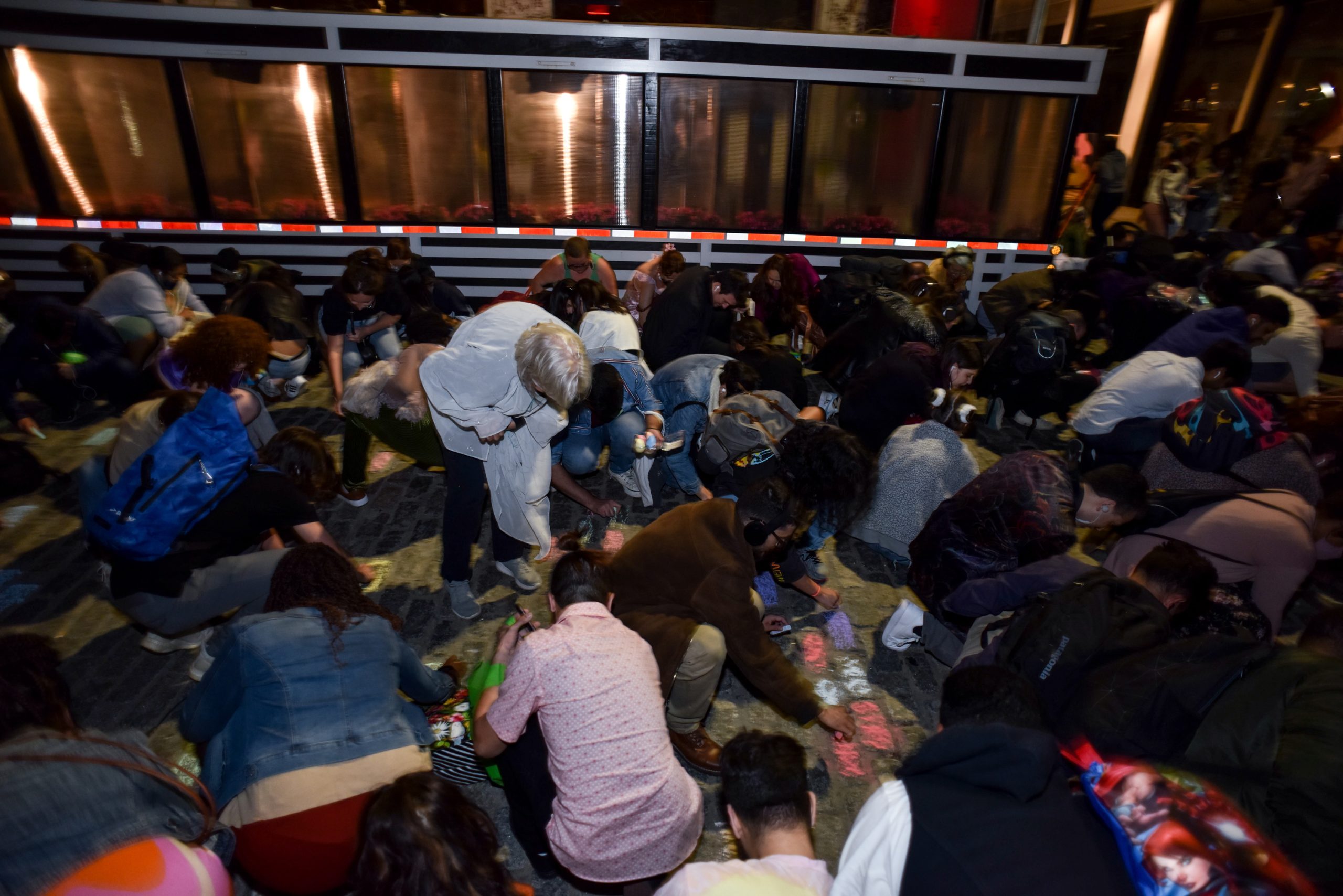 Participants were told to bring sidewalk chalk and they decorated individual cobblestones, creating the dance floor. 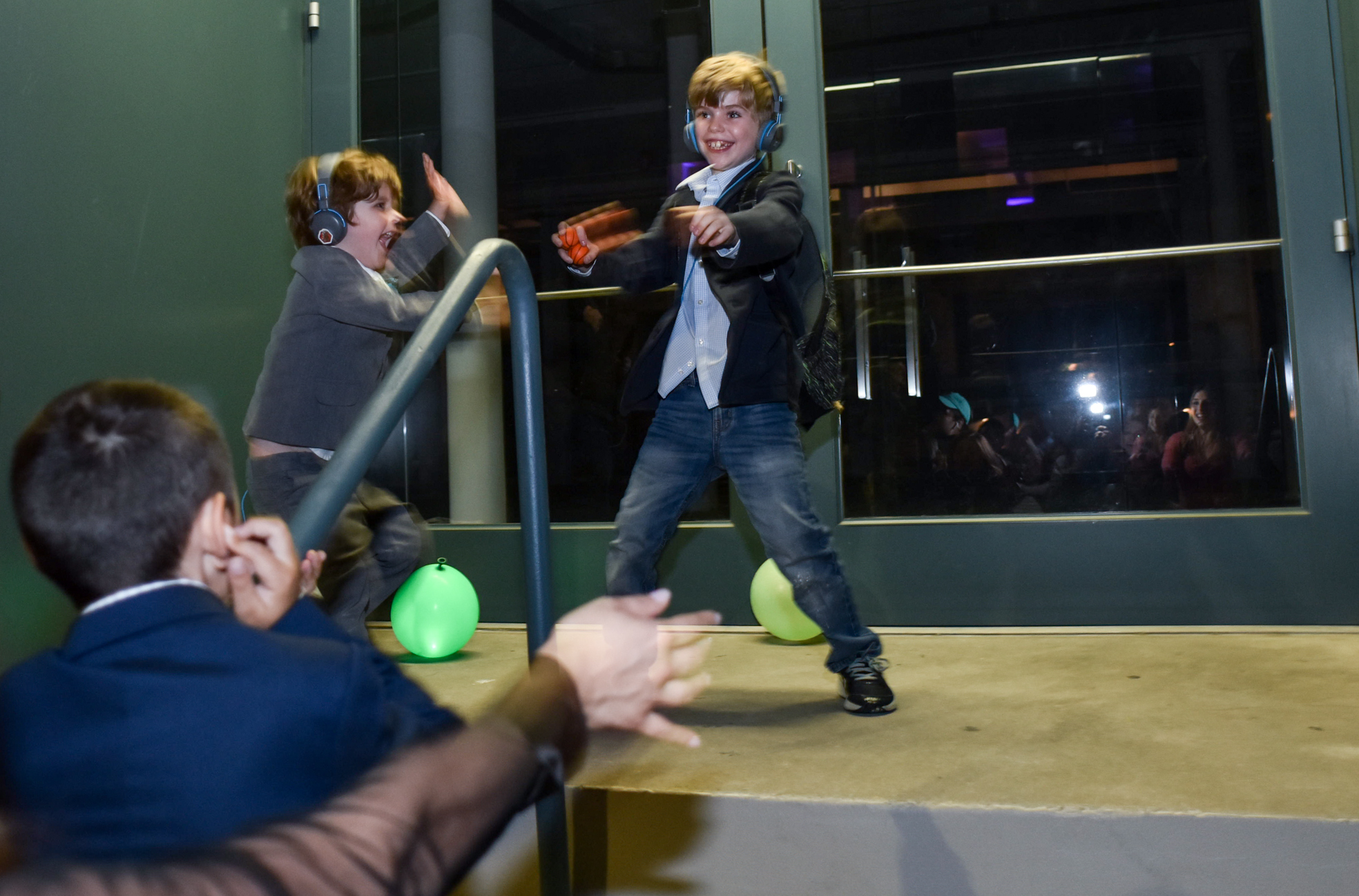 Little West 12th Street has many staircases, and it inspired us to do a version of our Dance Captain Wanted project, where individual dancers lead a mob of people. It was a total blast! 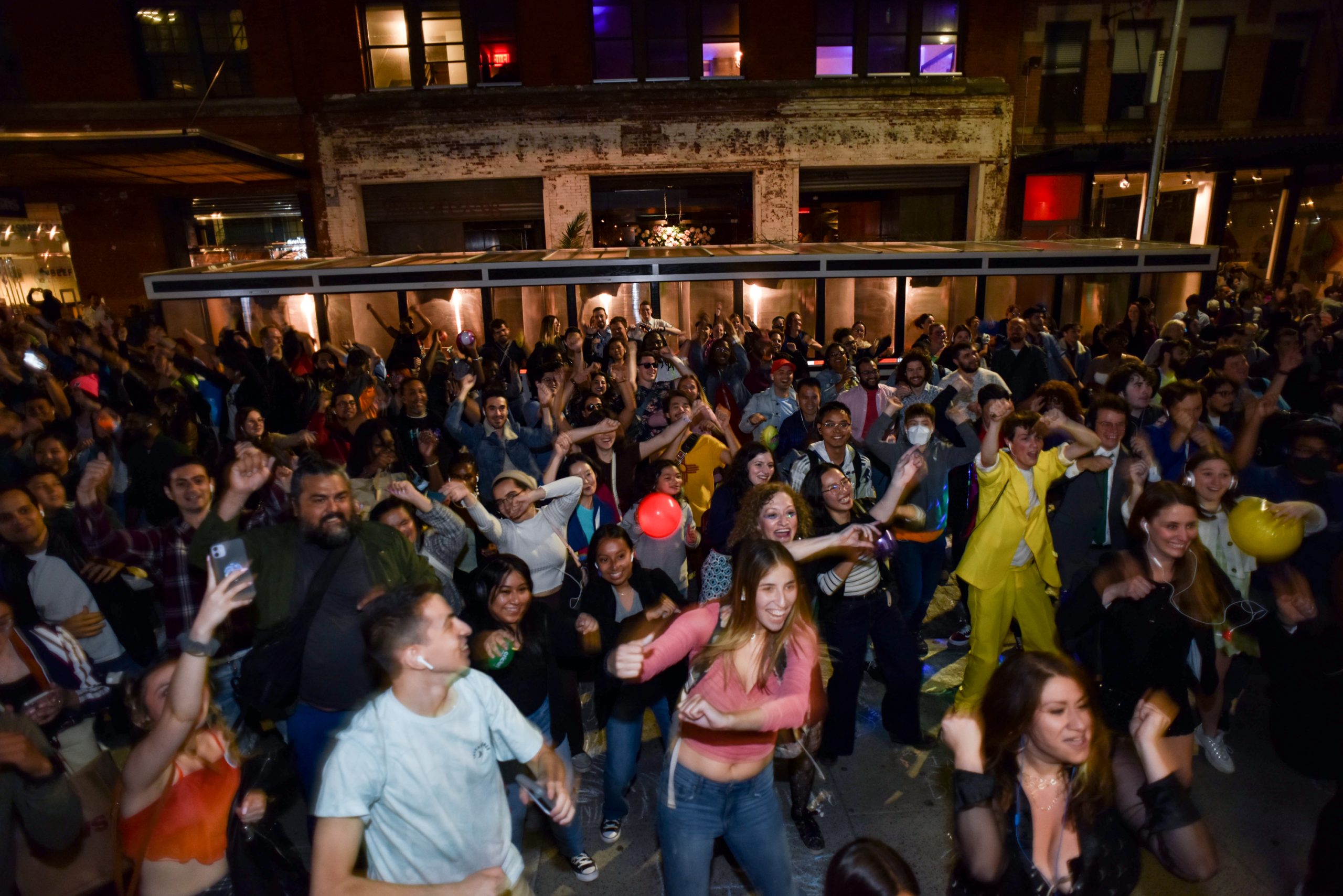 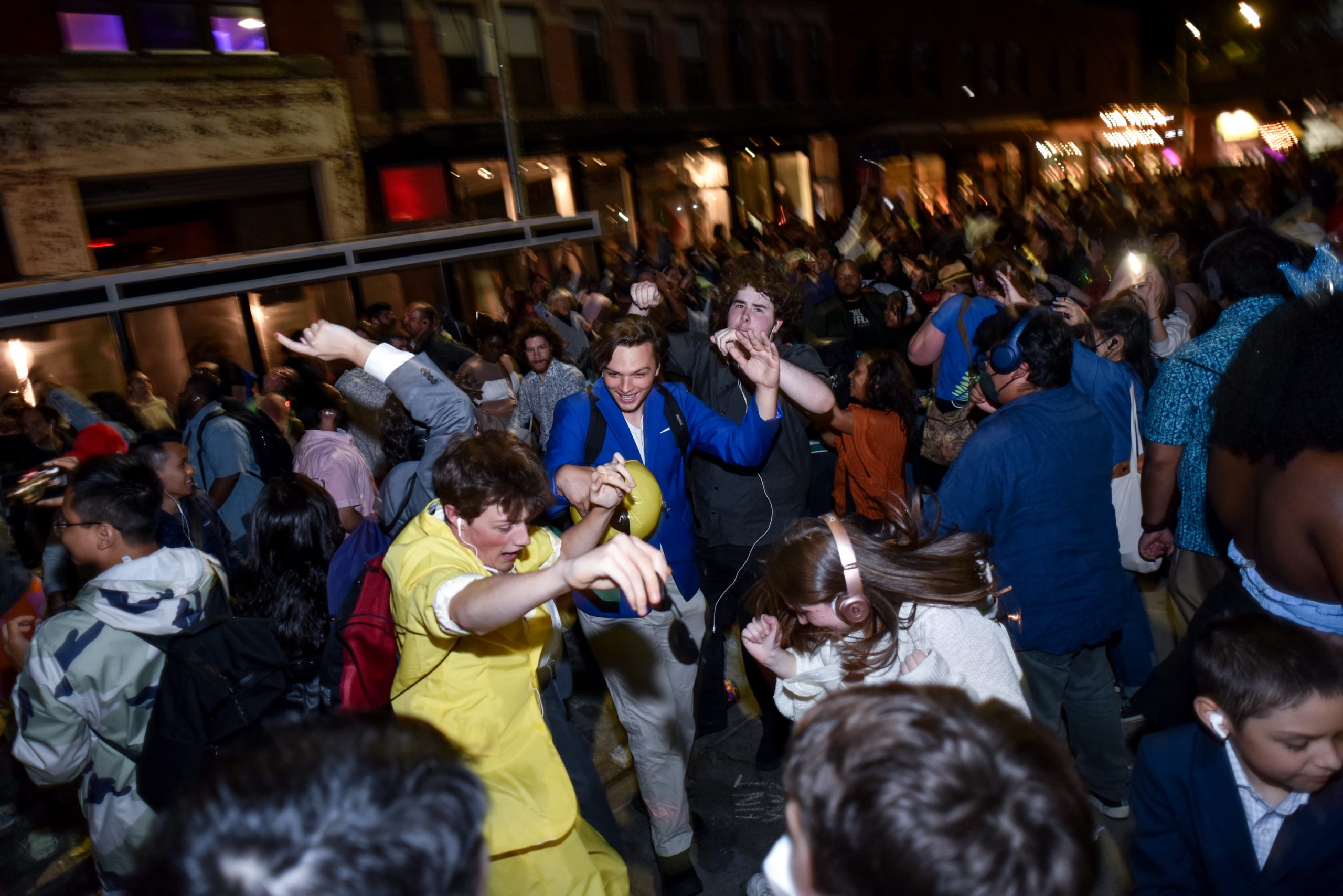 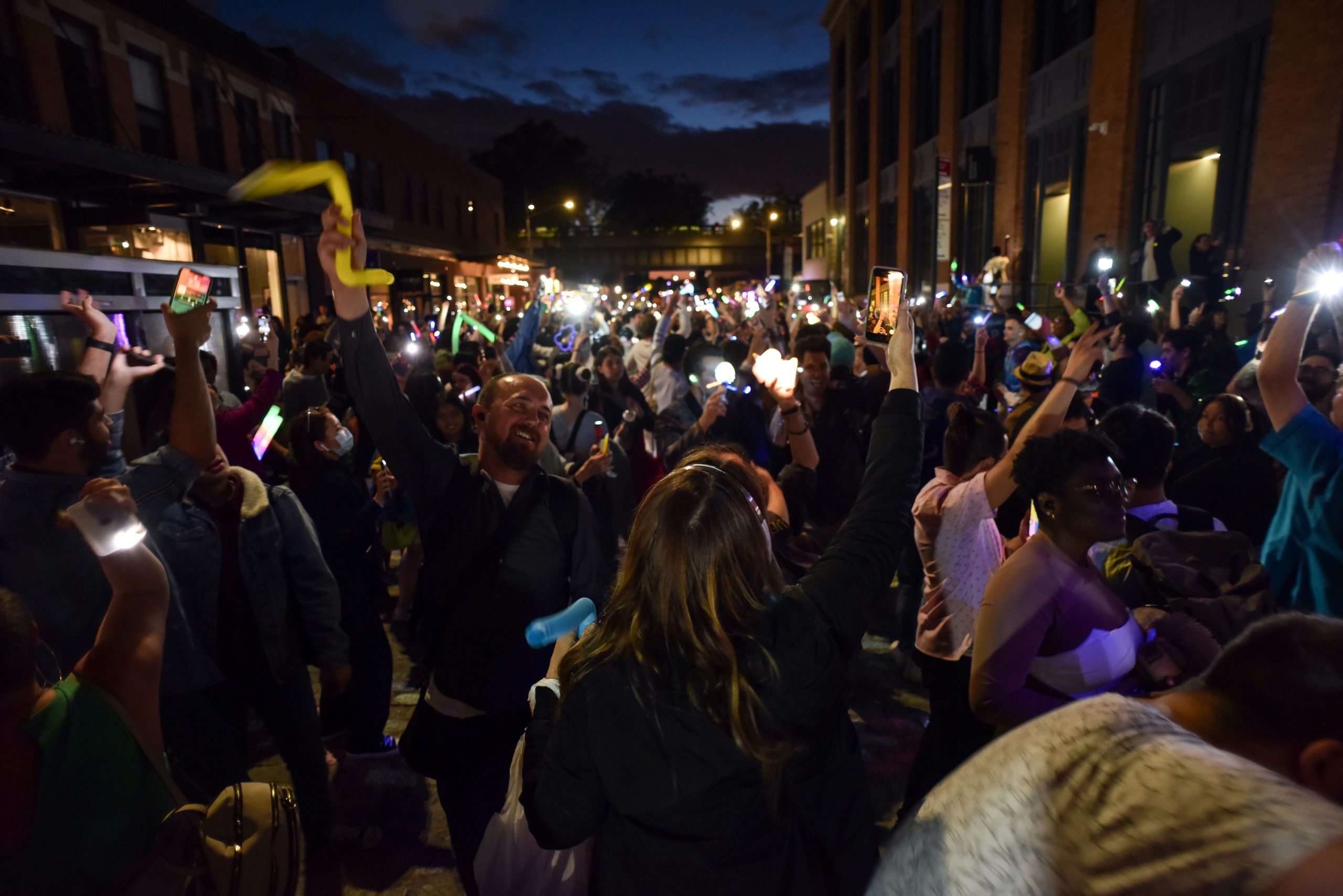 For the finale everyone was asked to turn on their smartphone flashlight and additional LED lights they brought. 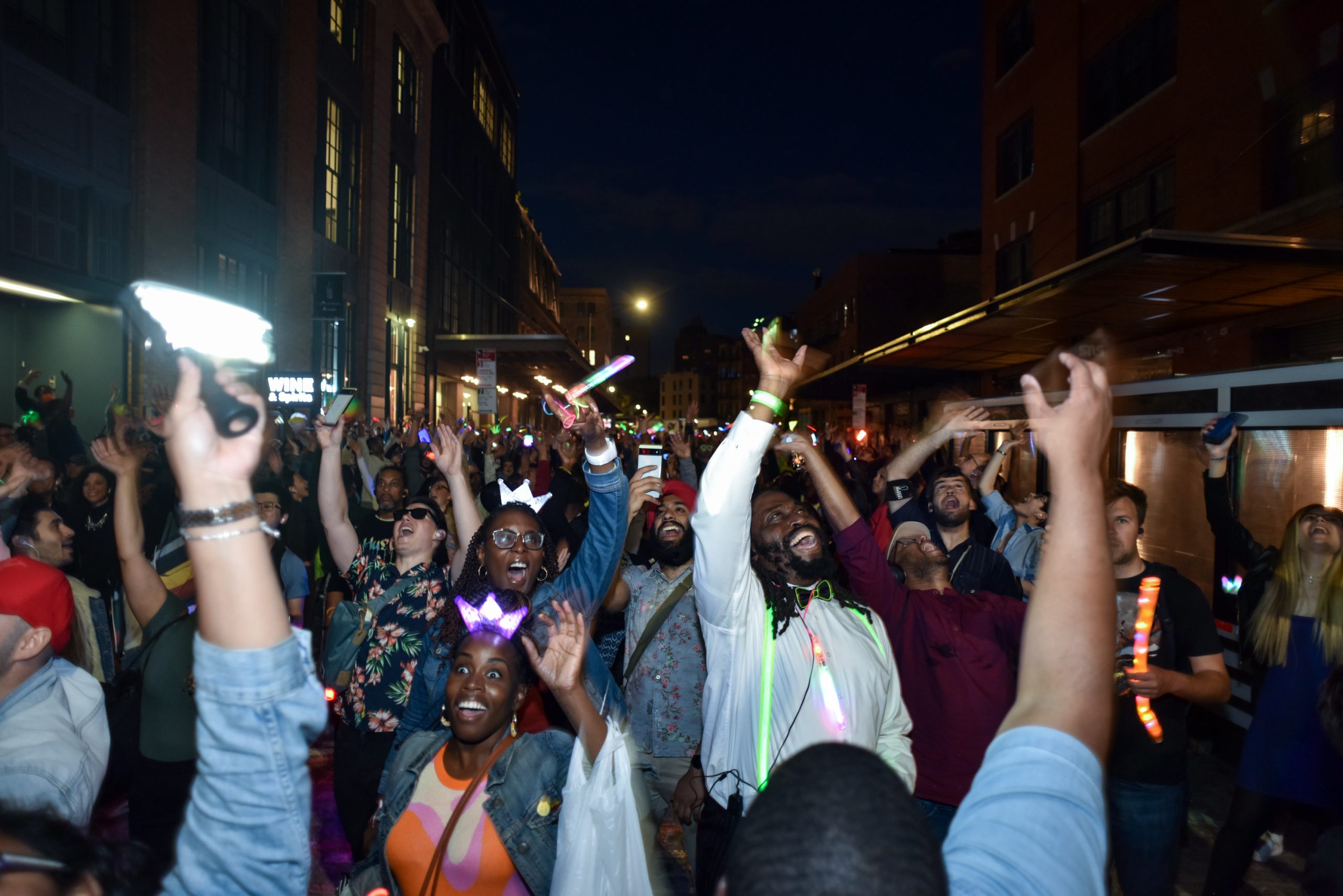 Waving goodbye to narrator “Steve” at the end.

HIRE US
We regularly tour The Mp3 Experiment around the world to places like Berlin, Germany and Adelaide, Australia and to college campuses in the US like UNC and Texas Tech. If you’re part of an organization (festival, conference, university student activities board, arts group) that is interested in commissioning an Mp3 Experiment, get in touch via our contact form.