For our latest mission we staged an unauthorized autograph signing in the Metropolitan Museum of Art with an actor who bears a striking resemblance to King Philip IV of Spain. Standing in front of the 400-year-old Velázquez painting, the “King” greeted museum patrons and offered free signed 8×10 photos. Enjoy the video above first, and then check out the photos and report below. 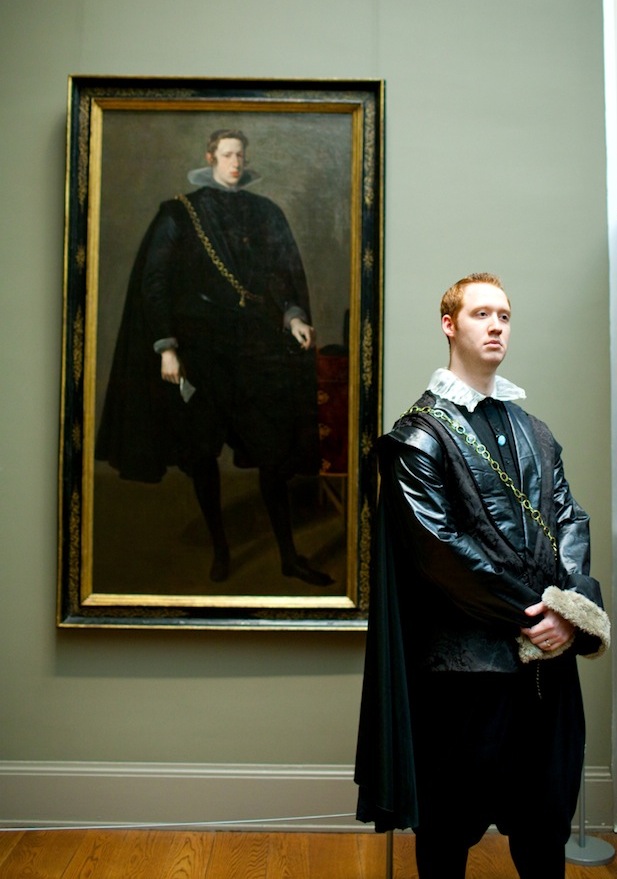 In September of 2009, I sent out a message to the Improv Everywhere mailing list asking for “special skills.” I asked if anyone on the list had a unique talent, prop, costume, or location that we might be able to create a mission around. Agent Elliot responded to the email, “The mission I would like to propose is to cause a scene in the Metropolitan Museum of Art. In the museum there is a painting of King Philip the IV of Spain and I look identical to him.” He attached a photo of himself and the painting as proof. I wrote back right away and told him that if he could get his hands on a good costume, Improv Everywhere would love to make the mission happen.

A few months later he wrote me back saying he had a costume made and was ready. I went to the Met to scout it out a week before the mission and to my horror the painting in question was no long on view. It had been taken down for repairs and no return date was given. The mission would have to wait. 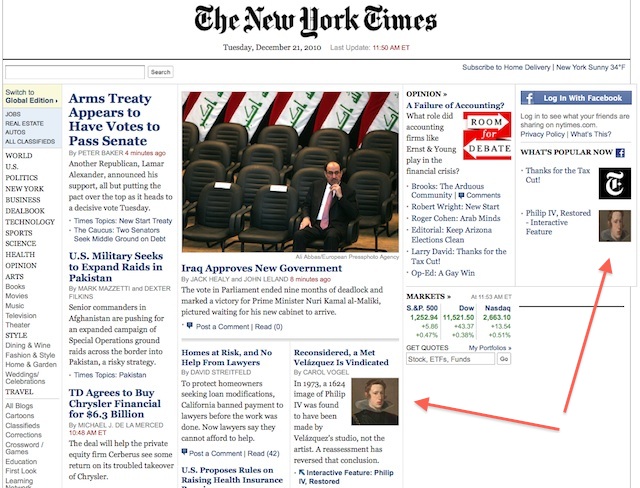 Almost exactly one year later I heard from Agent Elliot again. Not only was the painting back from restoration, but there was a huge New York Times story on it. The authenticity of the painting had been in question, but the restoration proved it was indeed a Velázquez and not the work of one of his assistants. This exciting news definitely called for an in-person celebration with the King himself. 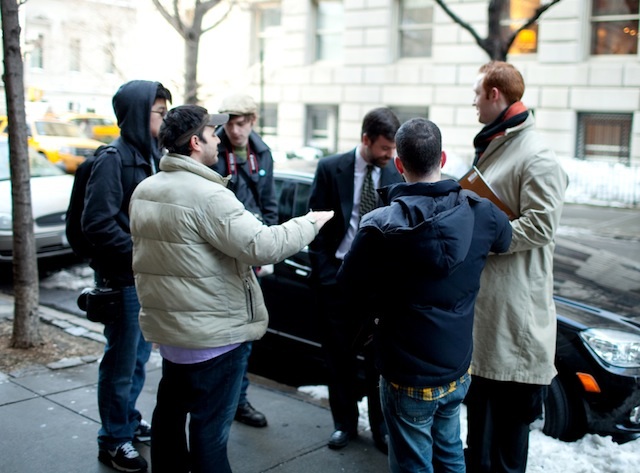 Getting organized with the crew across the street from the Met 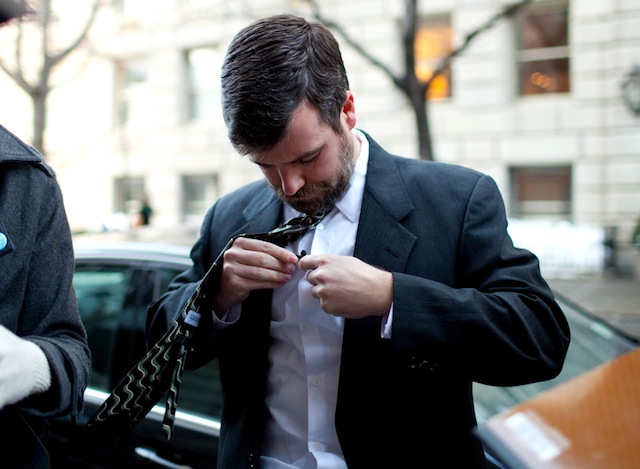 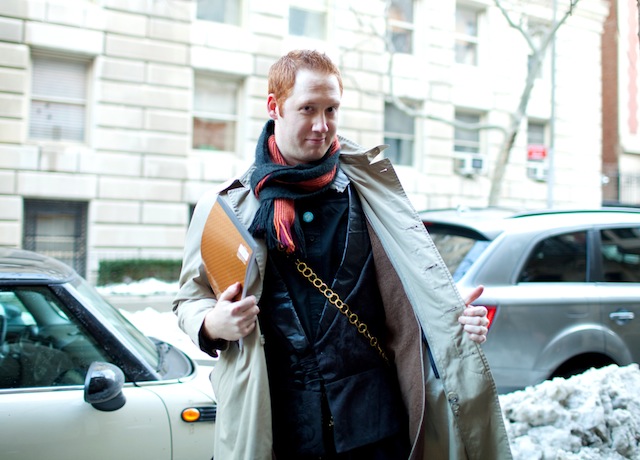 Fortunately it was winter when we staged this, as it made concealing the costume easy. Agent Elliot wore a long trench coat and a scarf to hide his regal attire. 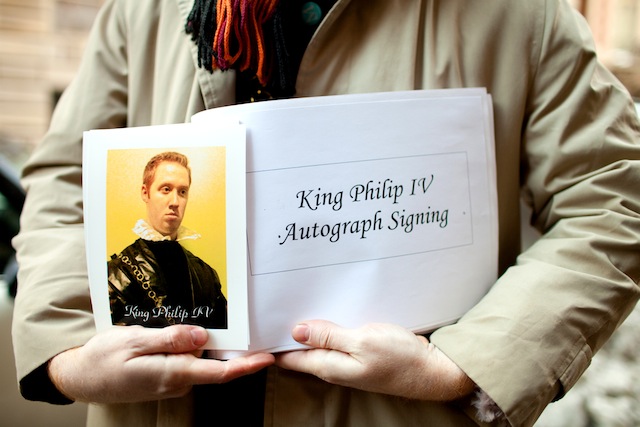 The best unauthorized Improv Everywhere missions are the ones that don’t technically break any rules. Surely there is no policy on the books at the Met about dressing up like a painting and standing in front of it. The museum allows sketchbooks in for the benefit of art students, so we used one to conceal our sign and our photographs. The King brought a pencil in to sign his autographs as markers are not allowed. 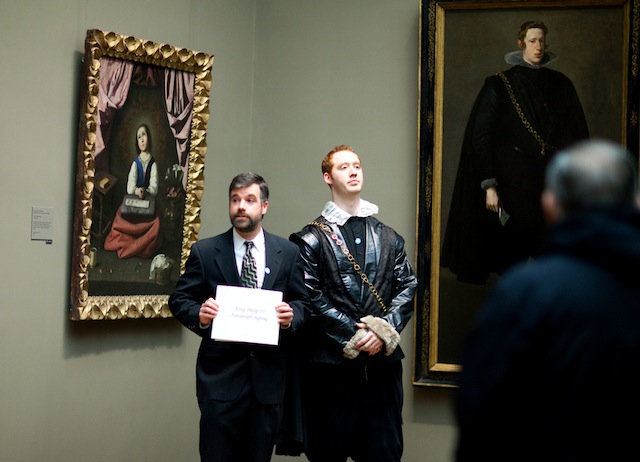 Agent Elliot took off his coat right as we walked into the room and passed it to Agent Adams. I unfolded the sketchbook to reveal the sign, and the mission began. I did most of the talking, since it seemed beneath the king to promote himself. I spoke softly but loud enough to be heard by the entire room. 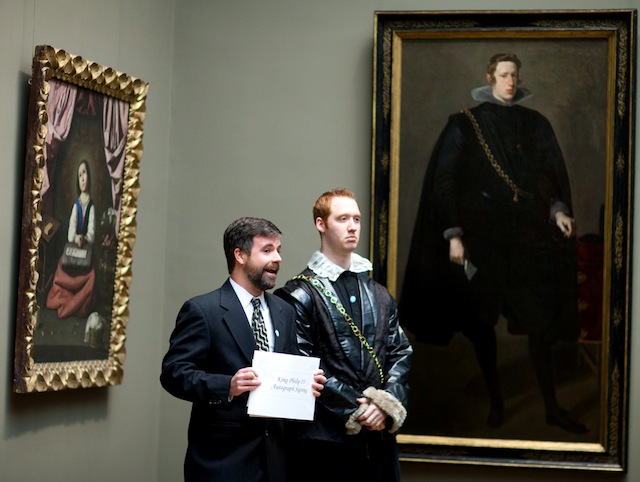 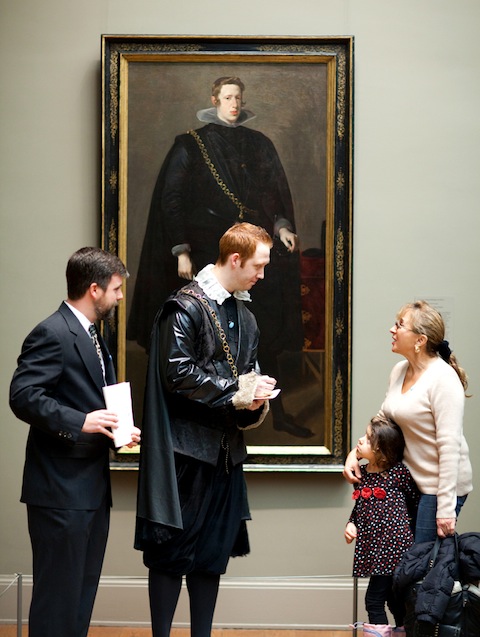 It took no time at all for someone to take us up on our offer of free autographs. The King spoke in a soft, dignified manner. 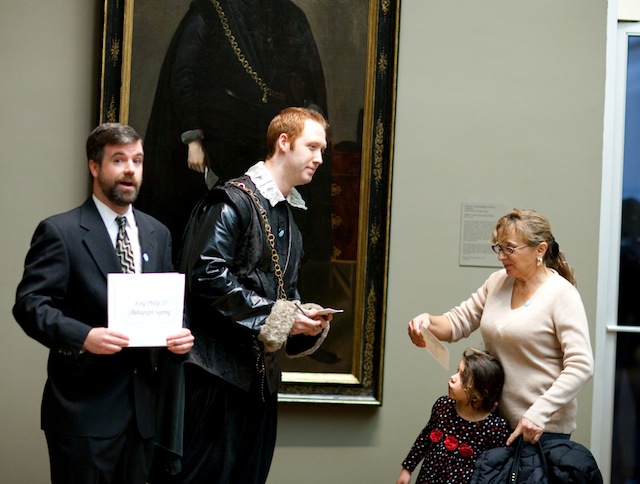 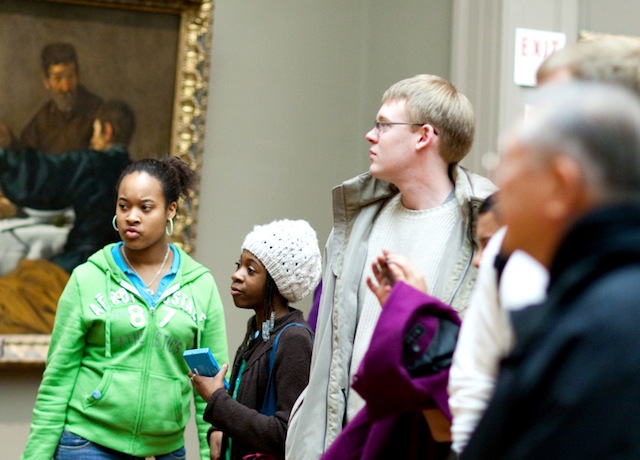 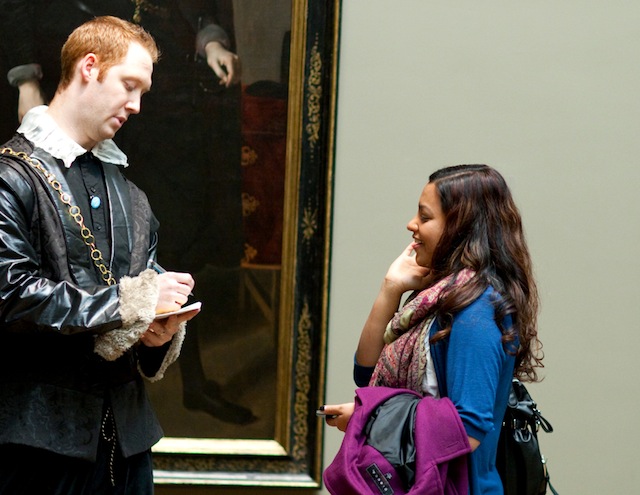 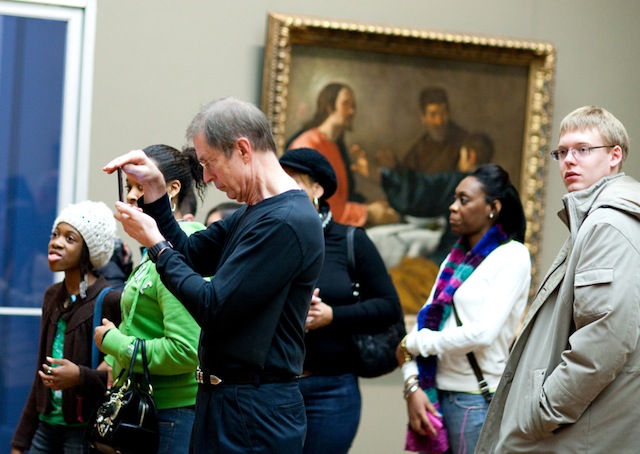 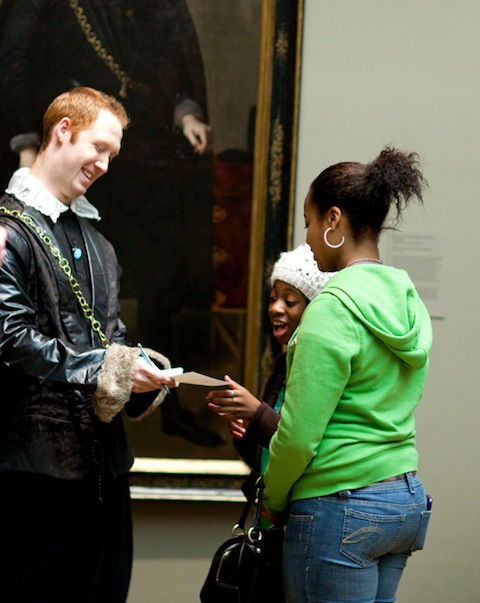 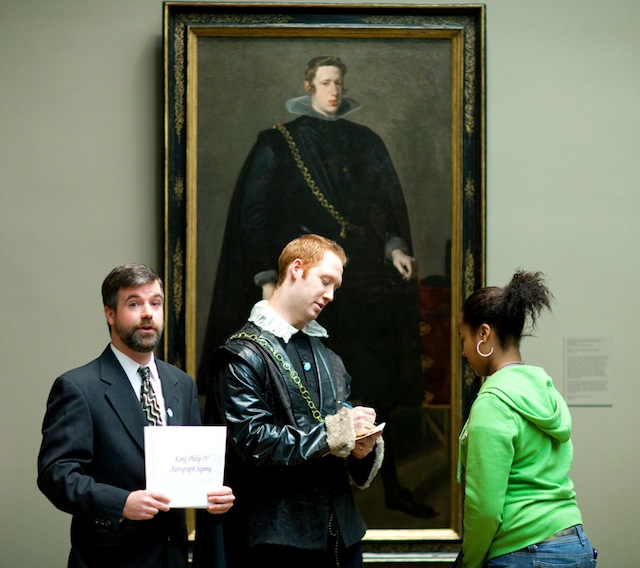 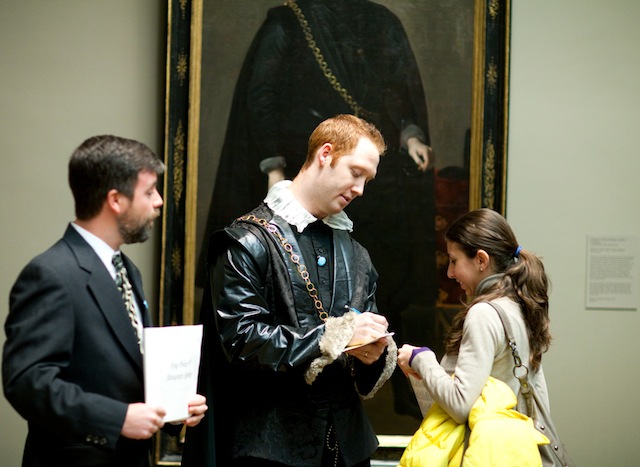 The woman in the photo above was from Argentina. I immediately said, “Oh, well you and the King speak the same language then.” I forgot to ask Agent Elliot if he spoke any Spanish. He didn’t speak more than a few words it turned out. Hilarity ensued. 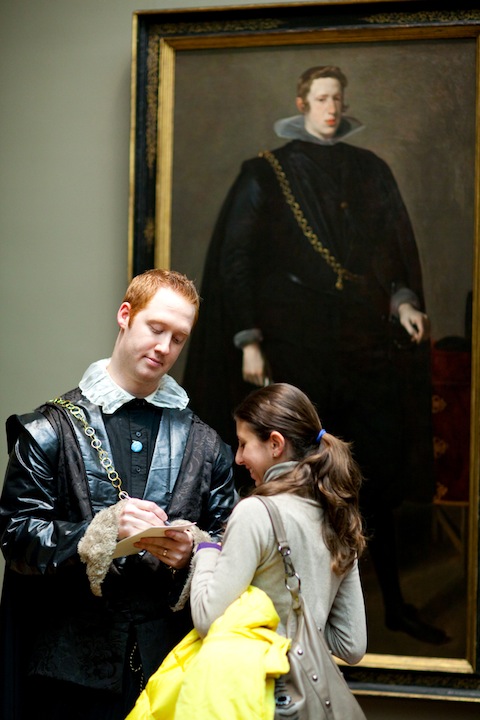 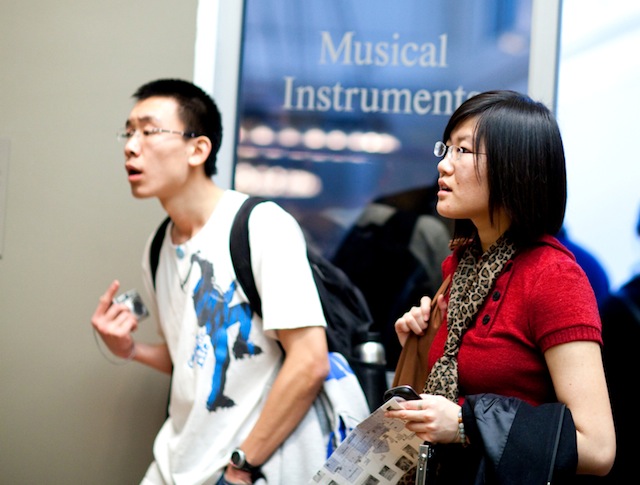 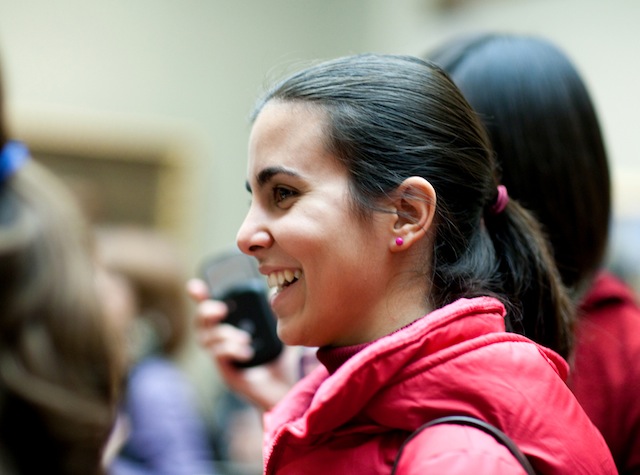 We got a wide variety of reactions from the patrons in the museum. Some stared bewildered, some laughed, some took photos, some wouldn’t stop asking questions. I’m not sure if we actually fooled anyone, at least not anyone who took the time to do the math at how old someone depicted in a Renaissance painting would have to be. Yet with my suit and the King’s costume, we did look pretty professional. We looked like we were supposed to be there. I overheard a few people guessing he was a modern day king, a descendant of the king in the painting. 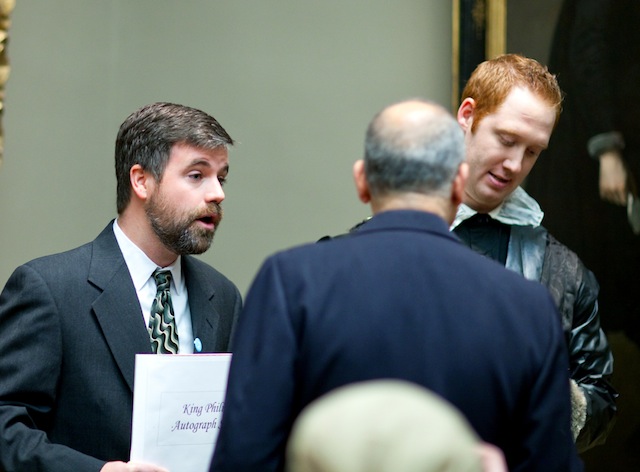 A guard had approached us about two minutes into the mission. He stood five feet away and stared confusedly without addressing us. I ignored him, and he eventually walked away to confer with the other guard in the room. About five minutes later he returned to ask if we had any permission to do what we were doing. I told him we didn’t, but that the King was very excited that his painting was back on view and he wanted to stand in front of it. 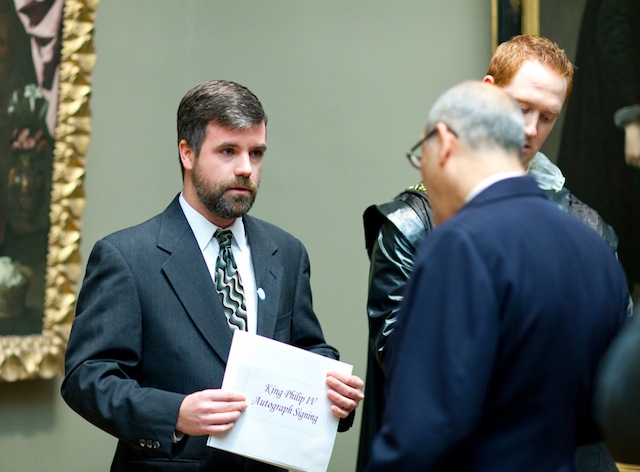 The guard told us he didn’t think we were allowed to be doing what we were doing without permission and that we should follow him so he could “call someone,” his boss I guess. I announced to the room that the autograph signing would have to stop for now, but that hopefully we’d be back later in the day. The King kept signing autographs throughout this discussion. 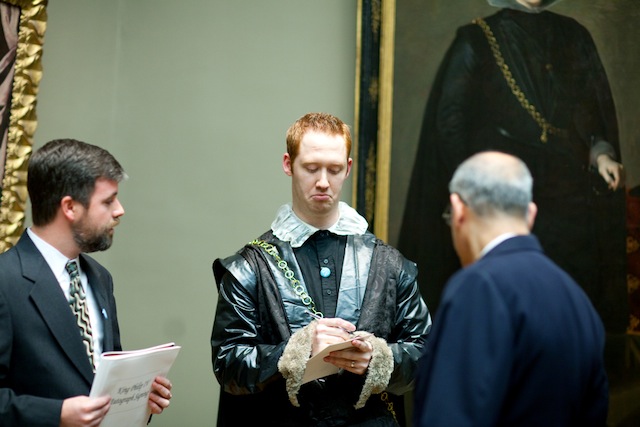 We followed him to the other side of the room where he began talking to the other guard present. I figured there wasn’t anything they could do to us besides ask us to leave. We weren’t breaking any written rules. I told the guard that we were done and were fine to leave. He seemed pleased with that and left the room. The second guard was MUCH more interested in what was going on. “He’s really the king?” he asked me. “But he’s too young…” Once I informed him that the King was 400 years old, he smiled and immediately got the joke of the whole thing. 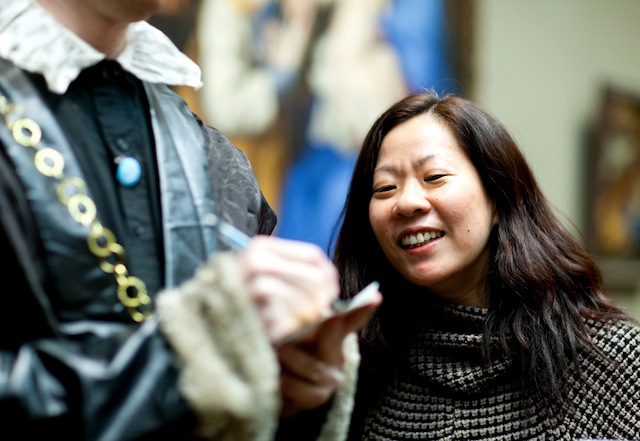 I put the sign away and stopped addressing the crowd, but people kept coming up to the King asking for autographs, so he kept signing. With the first guard out of sight and the second guard a fan of the joke, I figured we’d be in the clear. The King continued to stand near his portrait. 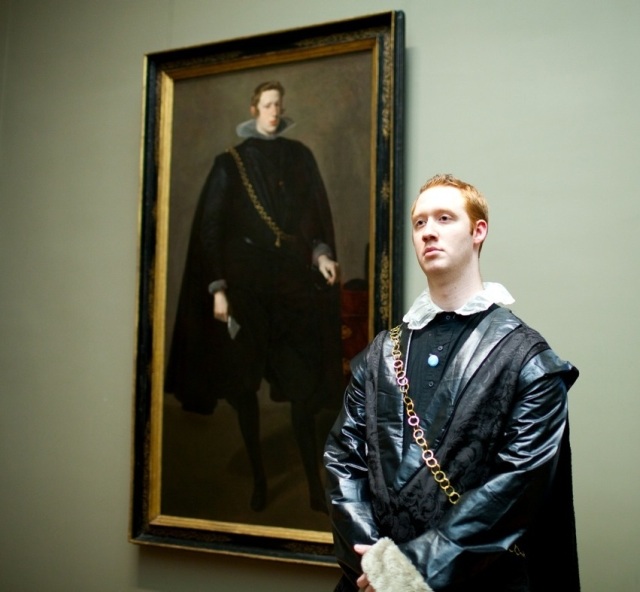 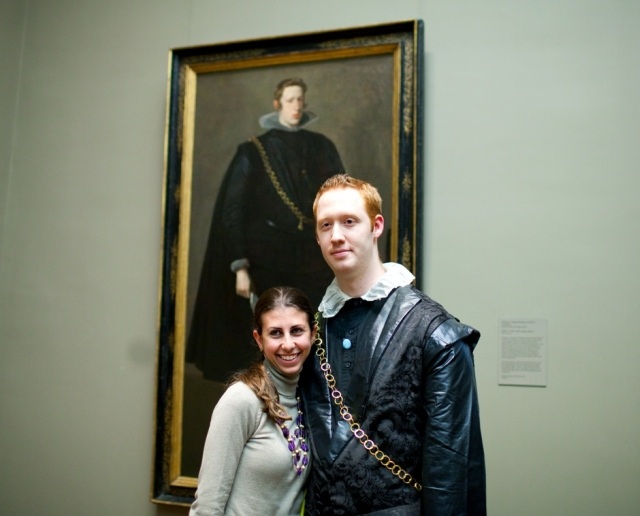 Posing for a photo 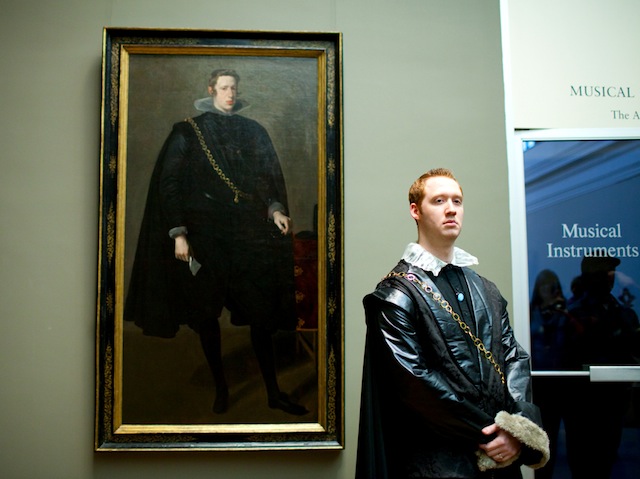 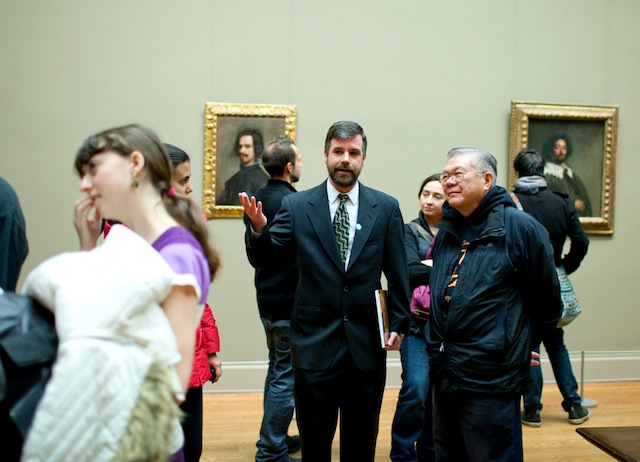 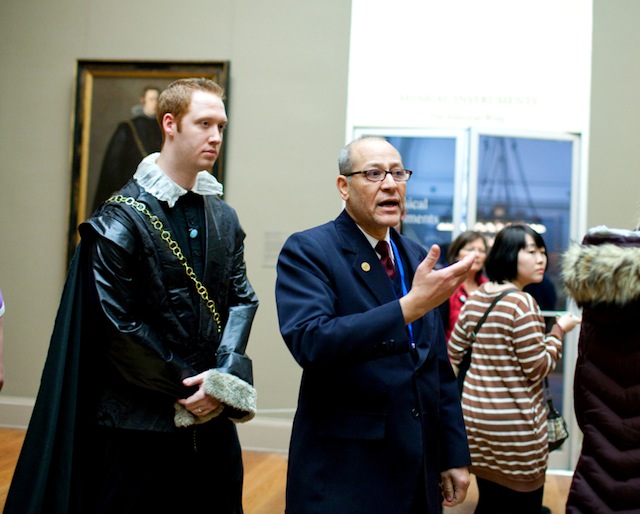 After about five minutes had passed, the original guard came back into the room. He was not happy to see us back in the same place. I explained to him that I stopped speaking to the crowd, and I didn’t know it would be a problem if the King was just standing in the room. He wasn’t interested in hearing any excuses and demanded that we follow him.

We followed him to a stairwell where he picked up the phone to call someone. I still figured there wasn’t much he could do other than ask us to leave the museum. I didn’t want to have to speak to the head of security or worse the cop on duty about our silly prank. The guard was having a hard time reaching anyone on the phone, so I just said to him, “OK, we’re going to go walk out the front door now.” He said, “OK,” and sort of seemed relieved. He didn’t want to have a meeting about this nonsense either.

We had lasted longer than I thought we would. I figured there would be a pretty low tolerance for pranks in front of priceless works of art. We caused our scene and it was time to quit while we were ahead. 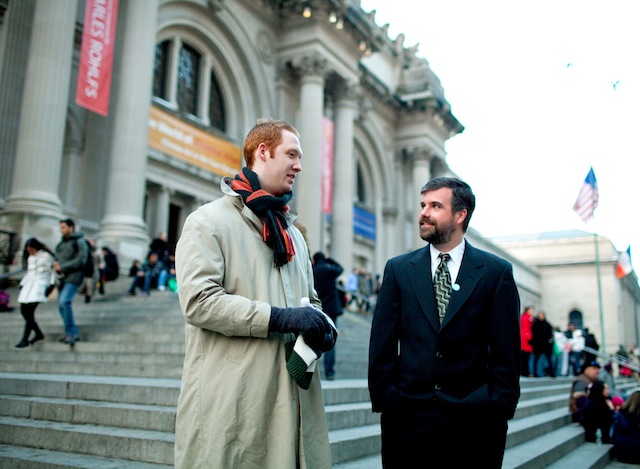