Thanks to the awesome group of people who participated in today’s mission at Coney Island. If you were there, please leave an Agent Report in the comments. I know there are hundreds of funny stories waiting to be told. Also leave links to any photos you might have taken. Photos from our official photographers are posted below, and we hope to have our video up in a couple of weeks on our YouTube channel. (Subscribe to it!) When the video is posted, we’ll post our official mission report here. [UPDATE – video embedded above]

For those of you who were not there– we had several hundred agents spend a day at the beach at Coney Island / Brighton Beach wearing black tie attire. We covered a mile-long stretch of beach with a diverse group of people of all ages (from babies to sixty-somethings) laying out, playing games, and swimming in the ocean, all in formal wear. Agents were instructed to find cheap tuxedos and ball gowns at thrift stores for the occasion. The mostly Russian crowd of beachgoers appeared to have a blast watching the spectacle unfold, laughing, taking photos, and asking questions. (Brighton Beach has a huge Russian population.) My personal highlight involved a group of ten middle-aged Russian people chanting “Swim! Swim! Swim!” to me, not letting up until I belly flopped in the water in my tux. One of them then waded out in the water to take a photo of me, not for himself, but so he could email it to me. 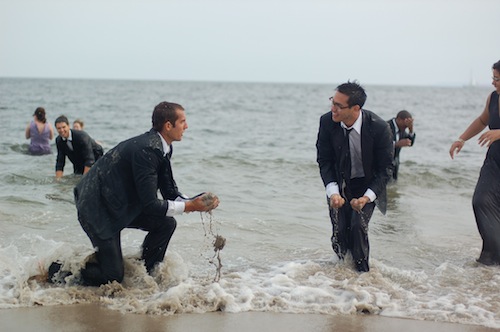