For our latest mission, we turned a little league baseball game in Hermosa Beach, California into a major league event. Enjoy the video below and then go behind the scenes with our mission report and photos. In order to pull this mission off we worked with the commissioner of the Hermosa Beach Little League. The commissioner provided us with the names, numbers, and batting order of all of the players for both teams. He told us the 2 PM game between the Mudcats and the Lugnuts would be ideal for our mission, and allowed us to arrive early to set up all of our equipment. He was the only person involved with the league who knew what was going to happen. The players, coaches, and parents were kept completely in the dark.

The league’s games are six innings, and we planned our mission to unfold slowly, heightening with each passing inning. As the game started, the only unusual thing anyone could notice was a large truck parked just pass the outfield wall (housing our jumbotron to be revealed later.) All of the cameras remained hidden away. 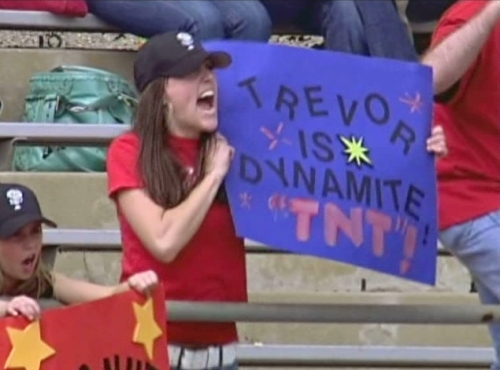 Agent Fair screams for her favorite lugnut
In the bottom of the first inning, our agents started to arrive. We told everyone to wear either red or black, the team colors for the Mudcats and Lugnuts. The commissioner gave us baseball caps for both teams, which we passed out to our agents. In a typical game, the stands are completely empty as the player’s parents sit in lawn chairs right next to the field. By the end of the first inning all of our agents were in the stands cheering like crazy for the teams. 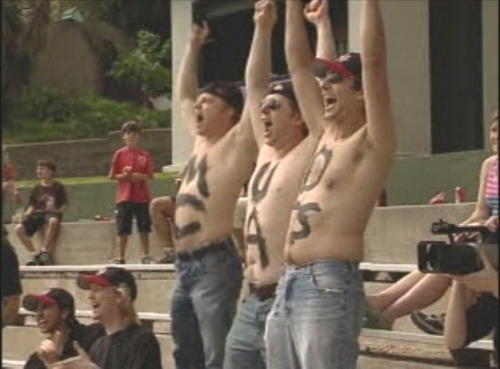 Agents Sessler, Newell, and Blumenthal
Three agents played the role of crazy shirtless dudes, painting “Mudcats” across their bare chests. These fans were particularly vocal in getting chants together. The players started looking back at the crowd with puzzled expressions. A few in the dugout peered around the corner to see what was going on. The game was in progress, so they had no choice but to keep playing and decide to figure it out later. 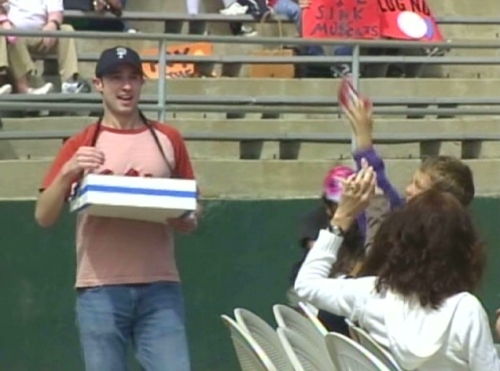 Agent Mercer vends peanuts
At the top of the 2nd inning, vendors started appearing in the crowd, “selling” peanuts and popcorn to the fans and parents. (They were free.) 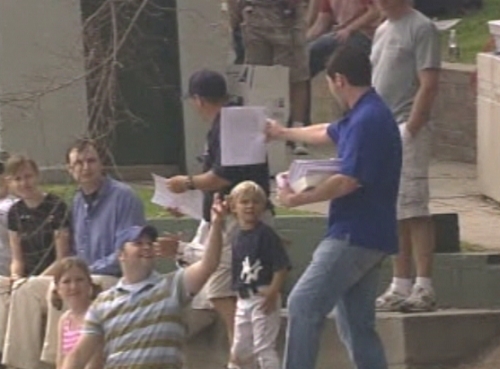 Agent Cicci gives out programs
The commissioner also got us “baseball card” photos of each of the players. Using these photos we were able to put together a full color program of the day’s game. Agent Cicci walked through the audience handing out the programs. Excited parents kept asking him who he was and how he had put the program together, but he just shrugged and said, “I just work for the field. It’s a big game today.” 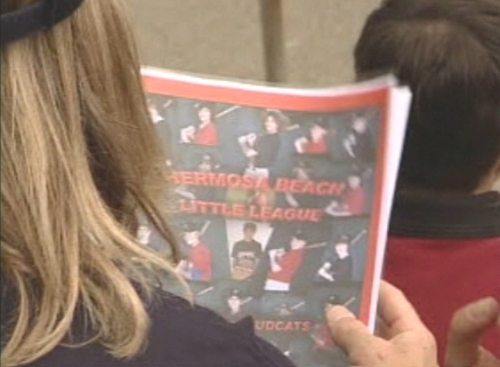 At the top of the 3rd inning, things really started to change as we revealed that NBC Sports was covering the game live, with the unveiling of our huge jumbotron in the outfield. 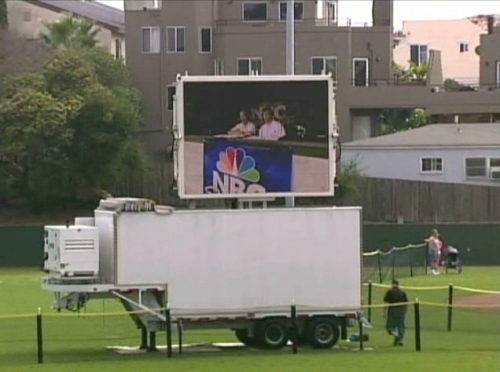 The jumbotron rose mechanically from the truck 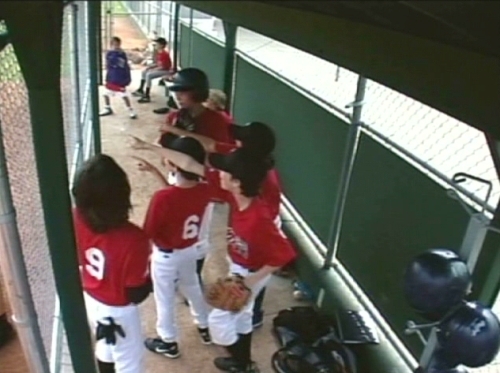 The Mudcat dugout reacts to the jumbotron
We collaborated with NBC Sports on this mission, and they took care of renting the jumbotron and hiring legendary sportscaster Jim Gray to call the game. Jim ran the play-by-play and I served as his color man. The two of us sat in a booth at the back of the stands, and we were able to make announcements on the field’s PA system. It was tons of fun watching the players react as the jumbotron rose in the outfield. The game had to momentarily stop as everyone settled down. 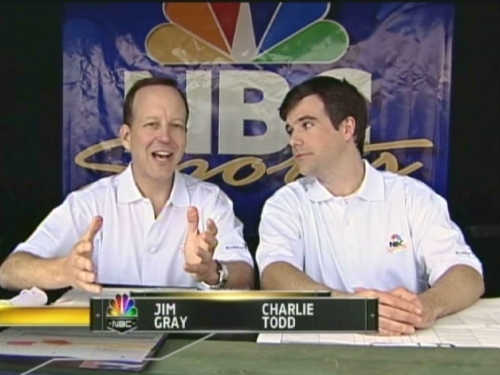 “It’s a beautiful day for baseball!”
The jumbotron broadcast live footage from the game, including instant replays, and we projected photos of each player as he came up to bat. 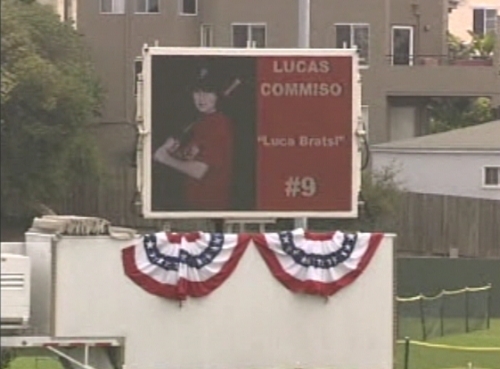 In the next inning, mascots for both teams arrived. We weren’t able to find “mudcat” or “lugnut” costumes, so we just went with random animals that fit the teams colors. 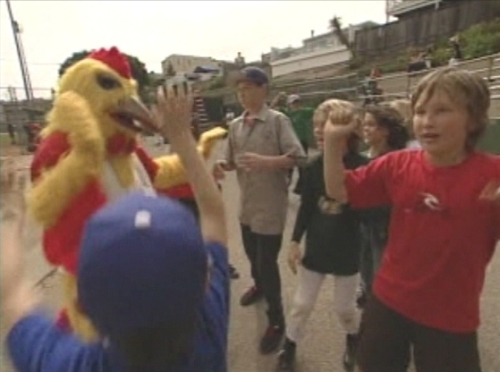 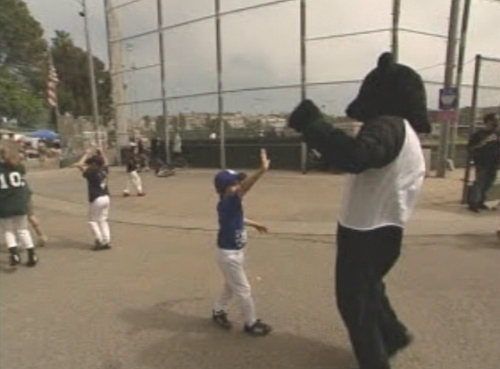 The “Muddy” Bear
The younger brothers and sisters of the players on the field had a great time interacting with our mascots, although some Lugnut fans got a little violent with the Mudcat bear, chasing and hitting him repeatedly.

For our final touch, we worked with NBC Sports to get the Goodyear blimp to fly over the game and film the action from above. As it turned out, the blimp’s home base was just a few miles from Hermosa Beach, and they were able to fly over us on their way to another game. It was an unusually foggy afternoon, and we were terrified that the blimp wouldn’t be seen. They ended up flying in extra low to avoid the fog.

The blimp has an LED screen on the bottom of it, and we had them project, “Go Mudcats! Go Lugnuts! Welcome to the big league!” 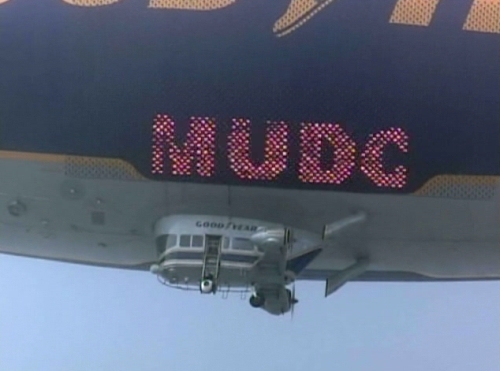 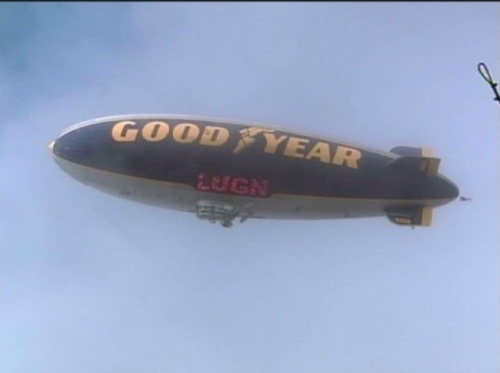 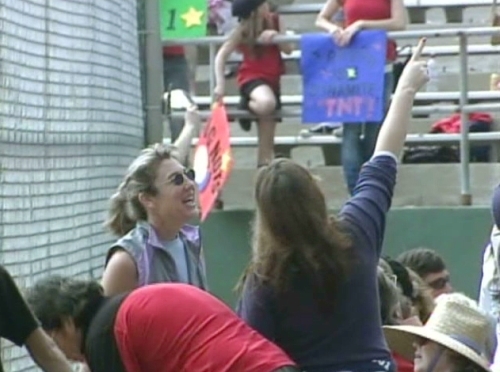 The crowd cheered for the blimp and parents started walking around asking our fake fans what was going on. Our agents insisted the game was being broadcast live on NBC and that they were just big fans of the Mudcats and Lugnuts. The parents couldn’t get an answer as to why it was happening, so they just sat back and enjoyed the fun. A few parents mentioned they wished they were home so they could see it live on TV.

When the game was over, our fans sought out autographs from the players. 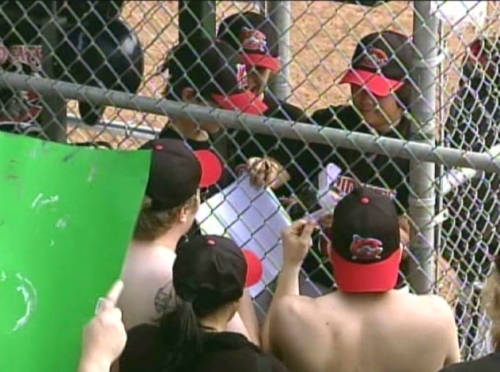 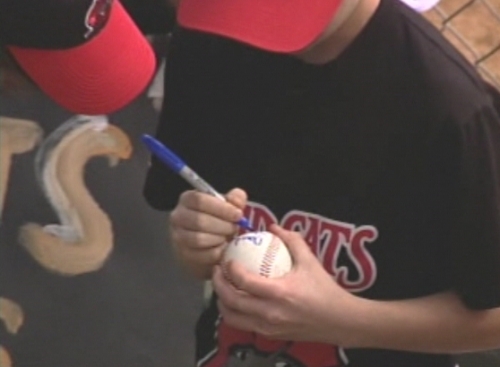 The day ended with a press conference with both teams. Agents Thorn and Dippold played journalists and grilled the players.

A few days later, I got an email from a parent (who must have found Improv Everywhere via Google search):

I believe you guys are behind the “Hermosa Beach Little League” taping that took place Saturday, March 10th, 2007. The parents will be talking about this for a long time… the kids even longer. My son was a pitcher on the Lugnuts. We had a long/tough season last year. Saturday made up for everything. I want to sincerely thank you for making Saturday so unbelievable. It was like a birthday, Christmas, and New Years Eve captured in a few amazing hours. Thanks a million for a once in a lifetime opportunity.