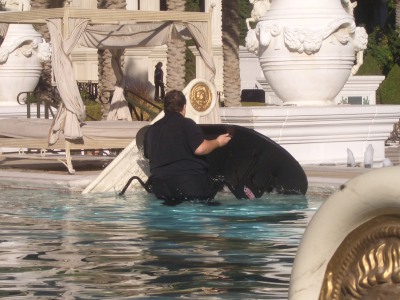 The same folks who produce the US Comedy Arts Festival in Aspen also hold a festival every year in Vegas. They invited Agent Kula and I to come out this year and show some Improv Everywhere videos as part of a stage show. Just like Aspen, we were asked to execute a mission in Vegas and then screen the resulting video at our show. In Aspen, we had several of our comedian friends from the UCB Theatre in town, which made it easier to pull things together. In Vegas, however, we needed to call upon the help of some local Improv Everywhere fans. I scanned my Global Agents Message Board and invited all of the Las Vegas members to come help us out. 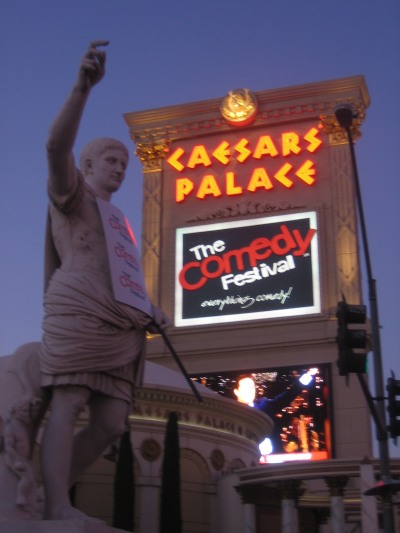 The festival was held at Caesar’s Palace 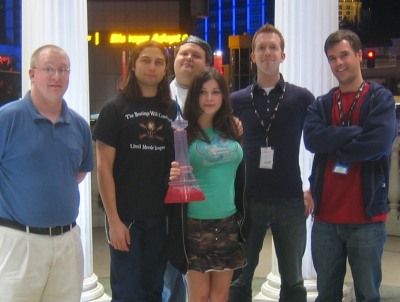 Meeting up with the local agents
We had a quick organizational meeting the night before the mission to figure out exactly what we wanted to do. Our initial idea was to do a new version of our old Circle Line Tour mission. Agent Cecil drove Agent Kula and I to a sporting goods store to search for an inflatable raft. While shopping, a very discounted and very awesome poker table caught our eye, and we suddenly had a new mission idea altogether: Swimming Pool Poker. Other casinos had Swim-Up Blackjack, where you can play cards at a table at the edge of the pool. We would take it a step further by putting the table and a fully-clothed dealer right in the middle of the pool.

We took the table back to my room at Caesar’s to store it for the night. It was pretty hilarious watching the bellboy carry our amateur poker table through the casino right next to all of the real ones. 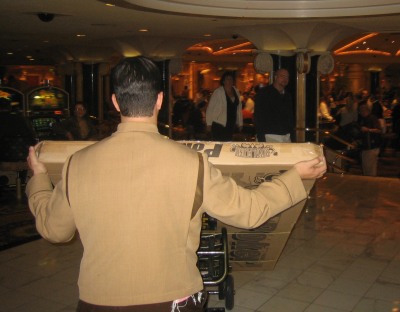 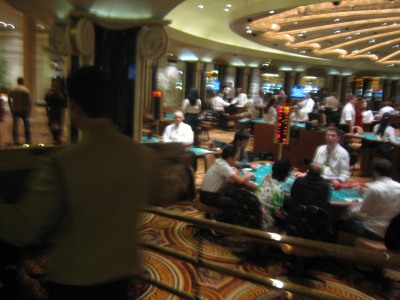 We all met up again the next day, and executed our mission. Because it was November, there weren’t a ton of people swimming, even though the pool was heated. Fortunately, there were plenty of sun-bathers out to witness our stunt.

I’m grateful to have been a part of this mission, having been a distant fan of Improv Everywhere for some time. Agent Todd e-mailed those of us from the message board asking for volunteers for a scene or two out in Vegas. Obviously, I hopped on board the train as soon as I could.

Having brought my lovely wife (Agent K-Batesole) and our two-year-old son (Agent Keegan) along for the mission, I was somewhat limited to the character choices I could take on. Our best choice was to be a “tourist family” of puzzled onlookers. My wife was even able to video some of the mission as she pretended to film our son. 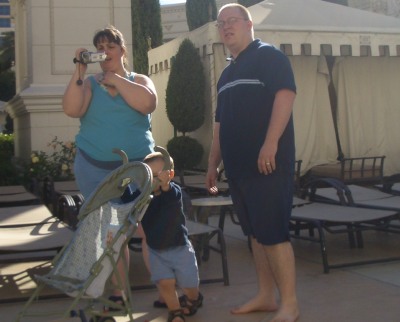 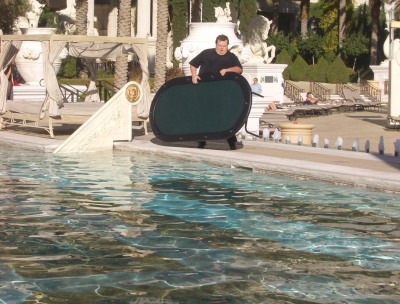 From the moment Agent Cecil ascended the stairs to the pool with the card table, people sat up and began to notice. I positioned myself near a few onlookers and did all I could to share in their bewilderment. 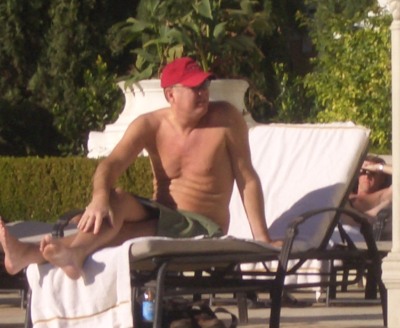 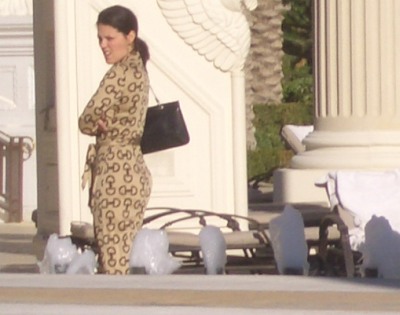 I thought that perhaps if I played out the skeptic trait of my character as long and as visible as possible, it would encourage audience participation more than if I just made a bee-line for the table. Hopping in the water, I attempted to look as curious and bewildered as I could. I passed the table twice, making sure to give a good long look at what was going on at the table. 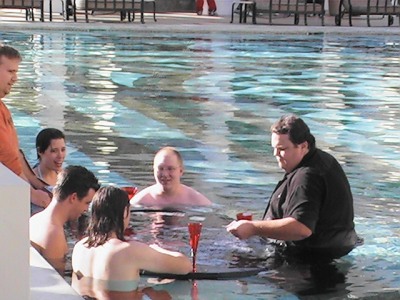 After two passes by the table, I eventually approached the table cautiously. The other agents encouraged me to join with such enthusiasm; I wasn’t sure how anyone could refuse. I took up a “seat” at the right end of the table (Yes, I’m the California native with no tan,) and began to play my luck. Turns out I should have been at a real table, because I managed a blackjack right out of the gate!

We did get one audience participant. You can see him sitting on the poolside in the orange sweater. He was fantastic. If he thought it was a prank or ridiculous, he never gave any indication of it. He played right along the whole time and made some pretty good table-chat too. 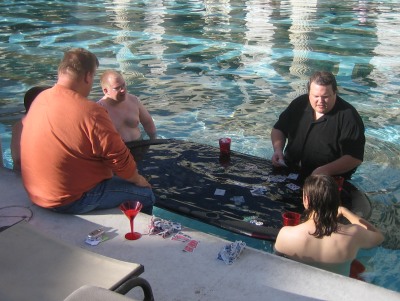 Aside from the initial reactions and stares, two things stand out in my mind about the mission. First of all was the deterioration of the cards. Those things came apart fast! The water dissolved the glue holding the back of each card from its face side. The result was a deck of 104 half-cards. I’ve got to hand it to everyone; it’s no easy task to keep a straight face playing cards in the middle pool while the deck of cards practically disintegrates around them. 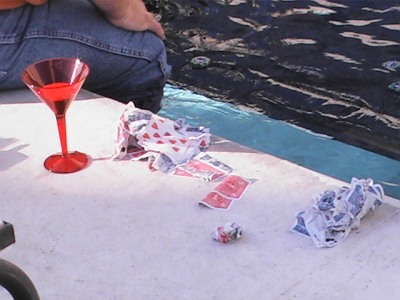 The second thing that stands out was the fantastic performance of Agent Songstress. What poise! What grace! What was she thinking!? High heels? In the pool? This was, I’m convinced, the hardest role for the whole team. Agent Songstress would come around and ask us if we wanted a drink, smile and walk off to return only a few minutes later. I didn’t see it at the time, but I heard later that she was only walking over to the next pool over and filling the glasses with the water from there. The crowd at the other pool had an entirely different spectacle to witness. She never broke character in the slightest. As far as I’m concerned, she took the entire mission to a level of credibility we wouldn’t have been able to achieve on our own. 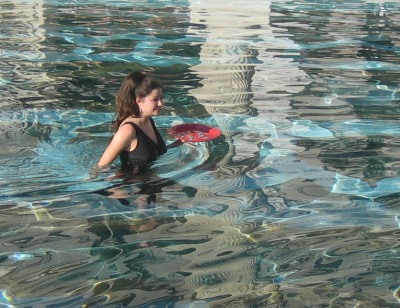 In the end we ruined at least 3 decks of cards and a pretty nice card table, had some partially submerged fun and gave a poolside audience of 40 people a neat story to tell when they went home.

For the far-too-curious, here’s a link to the Google satellite image of where we were. We were located in the middle pool on the left. 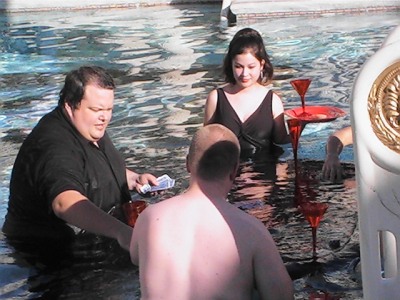 When the mission first started I waited for our ‘poker players’ to gradually gather around the table. As soon as I spotted a couple of people, I made my move and sauntered over into the pool (keeping my heels on) to see if anyone was in need of a drink. Of course, I couldn’t serve anything alcoholic so I just said, “Sorry, but today our free drinks only include our vitamin fortified Venus Water.”

The funny thing about that is the name of the secluded area for topless bathers had Venus in the name. Even funnier, the people who weren’t in on it seemed to believe it. So then I had to think…where exactly do I get the “drinks”?

The pool on the other side! People looked so confused when they saw me walk by and dunk my glasses into the pool. For the most part I ended up serving drinks to my fellow agents who tipped me with chips then took pretend sips with water dripping down their chins. I would get the occasional person who would call me over for a drink but when I would explain about the Venus water, most declined. I say “most” because one guy at the other pool actually believed that the water tasted so terrible because of the vitamins. 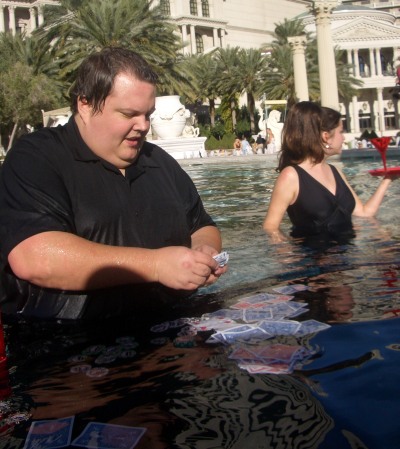 Besides people wanting drinks, I had others call me over to ask why the hell are people playing poker in the pool. Keeping the facade that I was employed by Caesar’s Palace, I just told them something to the affect of, “Caesar’s Palace is trying to see how our visitors would like gambling in the pool. As part of today’s promotion it’s free to play and the drinks are free as well.”

Most seemed to buy into it, many responding, “Wow…only in Vegas!” 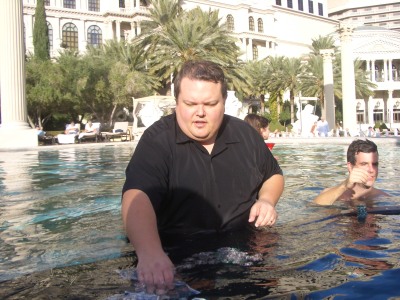 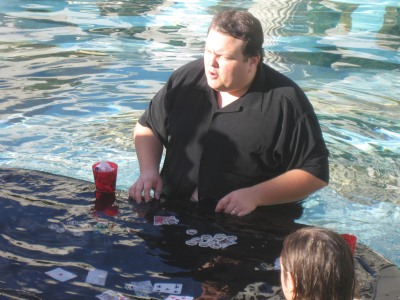 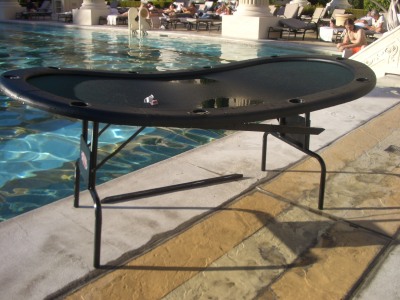