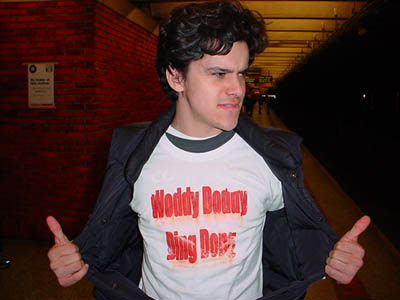 Six IE agents got together for an afternoon of song. The first leg of the mission took them to the Blockbuster Video on 10th Street and Broadway. The agents entered the store separately and browsed by themselves. 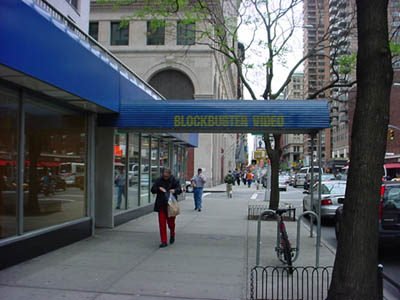 Target #1
Agent Amigone was chosen to initiate the fun. She began to softly sing the theme from the sitcom “Cheers” to herself. Gradually other agents began to join in until there were six people at different parts of the store singing “Cheers” at full volume. 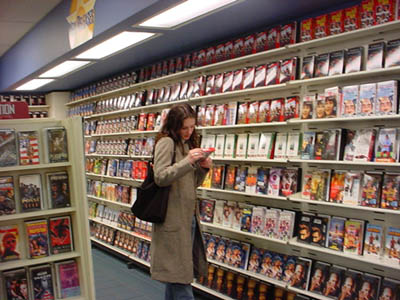 Agent Amigone, pre-song
The agents walked around the store signing, smiling and pointing at each other. This particular Blockbuster location had an odd layout that made it difficult for the agents to involve actual customers. Several walls and partitions closed off the agents from one another. They did manage to cause somewhat of a scene. Agent Good reports, “An employee was humming along with the Cheers song. She said she knew the words but was too embarrassed to sing. After we went through the song about five times, a I heard a girl in line mutter, ‘God, pick a new song.’ 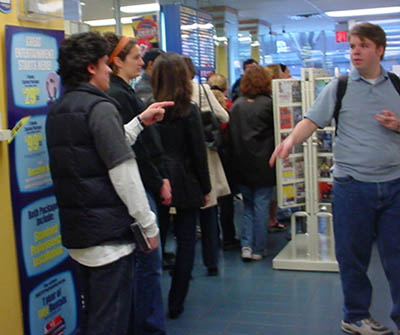 “…where everybody knows your name.”
The agents headed across the street to Radio Shack to attempt the same mission in a smaller venue. The setup was the same. Everyone entered the store separately and shopped. Agent Todd went around and, without being noticed, turned down the volume on all of the stereos; Agent Good asked for help with a boom box he had brought with him; Agent Demblowski asked for help with “adapters”; Agent Amigone was actually making a purchase when she started singing. 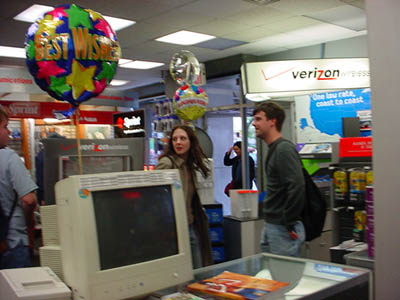 The Warp Zone
The group went through the Cheers song a couple of times, and then Agent Good initiated “Jingle Bells.” In the smaller space, the reactions of the employees were much stronger. One employee exclaimed, “Well, I guess it is sing-a-long time!” The employee helping Agent Good declared, “I feel like I just stepped into a warp zone!” When the agents finished up their singing, they walked around the store and introduced themselves. This caused more uproar amongst the Radio Shack staff, particularly when Agent Todd and Agent Amigone met. An employee told Agent Good, “I guess that’s a good way to pick up girls. I’m gonna start singing in places.”

Agent Demblowski recalls, “I went into purchase an adapter (for believability’s sake). Soon we were singing. The one employee couldn’t believe it (where am I, the warp zone?!) On my way out he asked if I initiated the song; ‘No, I was just looking for an adapter.'” 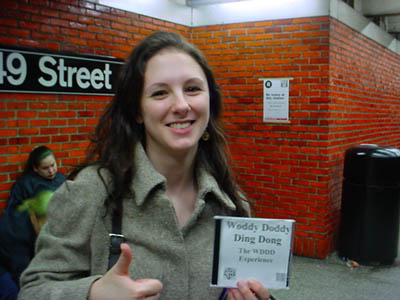 Agent Amigone shows off her WDDD CD
For the final mission of the day, the agents gathered in Union Square Park to record a fictitious song, “Woddy Doddy Ding Dong” (a name Agent Robertson developed). The lyrics to “WDDD” are pretty simple; the name of the song is repeated infinitely with hip-hop attitude. Using a cassette recorder, the group made a one-take live recording right there in the park.

The agents then headed underground to the N Train:

After a minute or two, Agent Amigone rises from her seat on the other end of the train. She takes off her headphones and shouts at them.

Amigone: Oh my god! You guys are singing ‘Woddy Doddy Ding Dong’!? That’s what I’m listening too!! Are you from Boston?

She produces a WDDD CD from her bag as proof.

Todd: Hell yeah we’re from Boston. Awesome!! Sing with us!

She Joins the group. 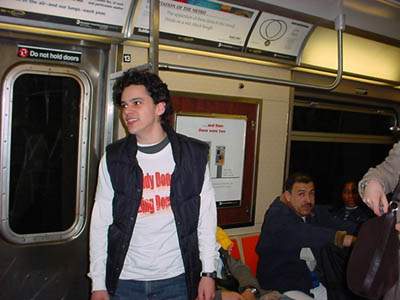 Demblowski: Guys! Guys! Oh my god! Check this out!

He opens up his vest to reveal a WDDD T-Shirt.

Demblowski: I saw them on tour last fall!! They’re like my favorite band!
JMartin: Awesome!
Todd: That’s so cool. That shirt looks really old. Is it supposed to look like that?
Demblowski: Yeah! It’s how they make ’em. Old school style!

The group continues the chant of “Woddy Doddy Ding Dong”.

Moments later, Agent Good enters the train and stands on the opposite side. He is holding a boom box that is playing the previously recorded version of “WDDD”. The tape sounds, not surprisingly, exactly like the rendition the singers are doing at the other end of the train. An older Russian man gets up and excitedly shouts at him, having recognized the amazing coincidence.

He points to the singers.

Agent Good walks down the group.

Agent Good: Oh my god! This is so funny! You guys like WDDD? Are you from Boston!?

Agent DMartin: Yeah! This is so cool!

The whole group continues to sing and dance and manages to convince at least one bystander to sing along. 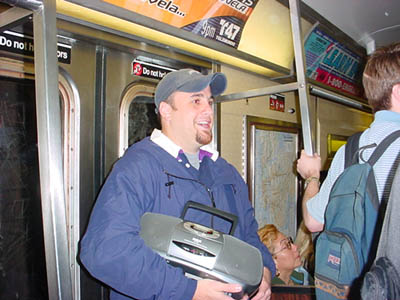 Agent Goood plays WDDD
Everyone on the train was completely caught up in the series of coincidences, whether they believed it to be a setup or not. Agent Good recalls, “Everyone’s head whipped around in disbelief when I entered with the boom box. When I walked down the car everyone was laughing.”

Another successful day of organized fun.