For April Fool’s Day this year, we uploaded a new video called Jar Jar Subway Car (a supposed sequel to last year’s mission Star Wars Subway Car.) The video made it seem like our actor playing Jar Jar Binks was assaulted by three random strangers on the train. As the behind the scenes video above will show you, it was a hoax. The three guys were all friends of ours. Everything was completely staged, and everyone on the train was told what was going on beforehand. This is the third year in a row we’ve posted a fake mission on April Fool’s Day. If you haven’t seen our previous ones, check out The No Underwear Subway Ride and Best Funeral Ever. Watch the video first, and then enjoy the full story below. 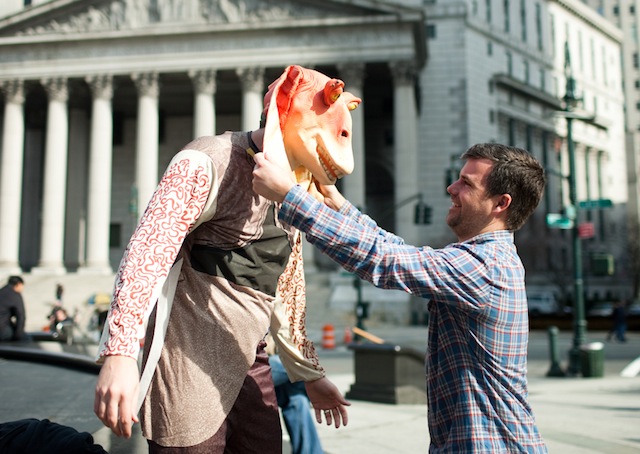 The last two April Fool’s videos made it look like we did a mission in very poor taste. This year, I wanted to stage a mission that seemed to go horribly wrong. I figured having someone attack one of our agents is about as bad as it could get. I thought a sequel to Star Wars Subway Car would be a plausible mission for us, and since pretty much everyone hates Jar Jar Binks, he seemed to be the best candidate for a beat down. Plus, Jar Jar Subway Car has such a great ring to it.

We would never actually stage a lame mission like this. Star Wars Subway Car was both site-specific (the white walls and the sliding doors on the train made it look like the rebel ship) and a reference to a specific scene in the movie. This was just a cheap imitation of the first mission, using random characters and lesser-quality costumes. The idea that we would follow up the original video with a sequel (or prequel!) using Jar Jar Binks, the most hated character in the whole franchise if not all of cinema, made us laugh. 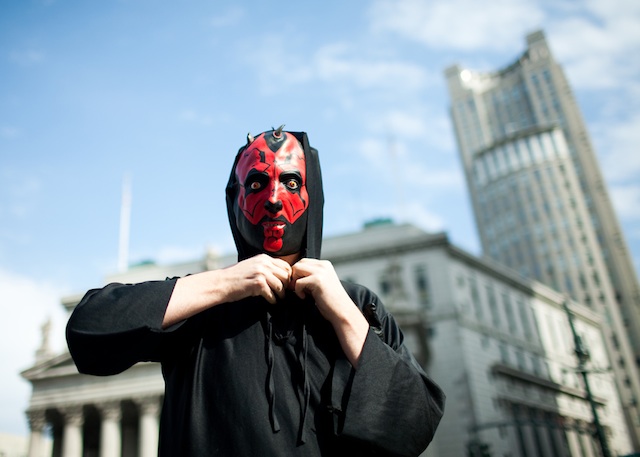 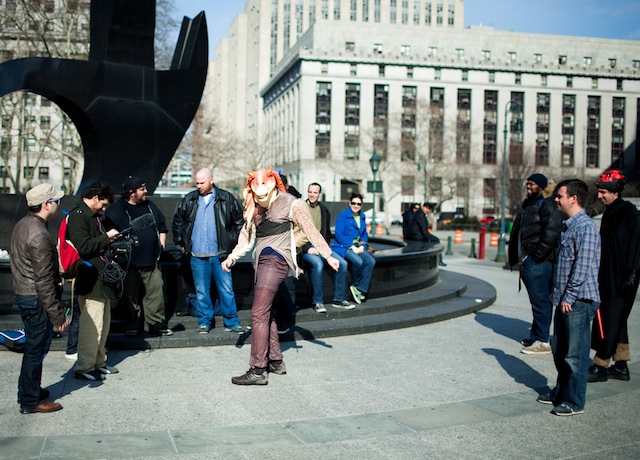 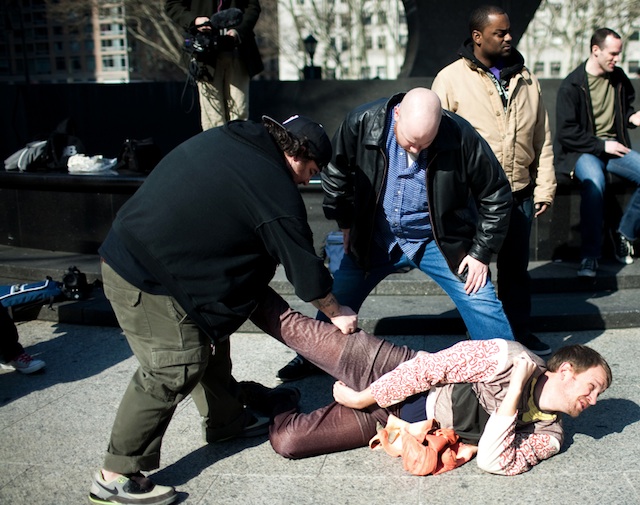 Agent Ace$Thugg and Agent Scordelis were cast to play Jar Jar and Darth Maul. For the attackers, I wanted to cast people who our fans wouldn’t recognize as being a part of the group. Agent Diston and Agent Beyrer have never been in an IE video, and Agent Lang hasn’t been prominently featured in a video since No Shirts in 2007. All three guys have been involved with The UCBW, a comedy wrestling league at the Upright Citizens Brigade Theatre, so they were already experts in fake fighting. I also cast three agents to play onlookers on the train who would be seated right in front of the fight. This would help us with continuity and would guarantee we’d get some great reaction shots. We ended up getting lots of great reactions from strangers as well. 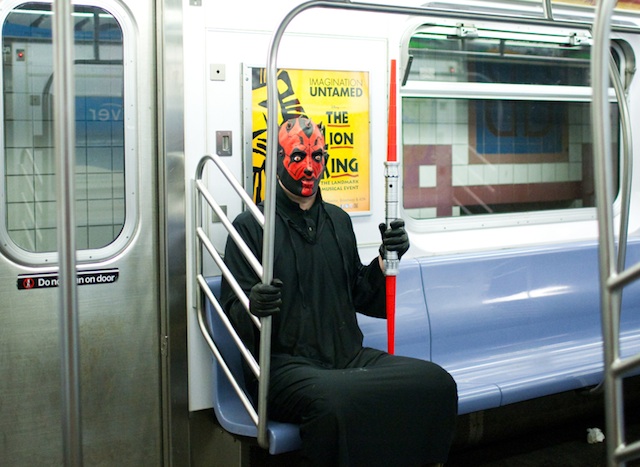 Darth Maul boarded the train first, allowing us an opportunity to stage some silly photos. 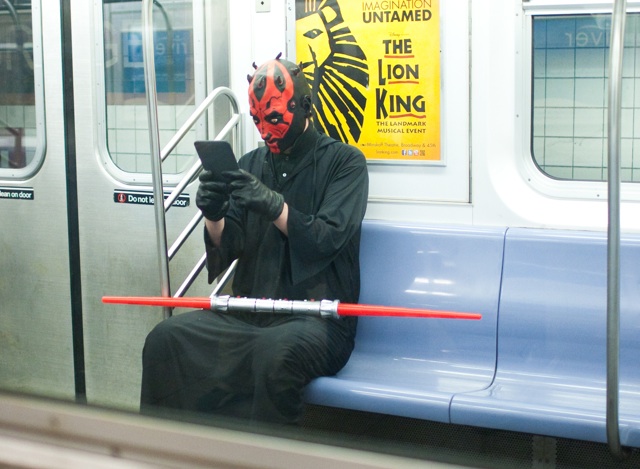 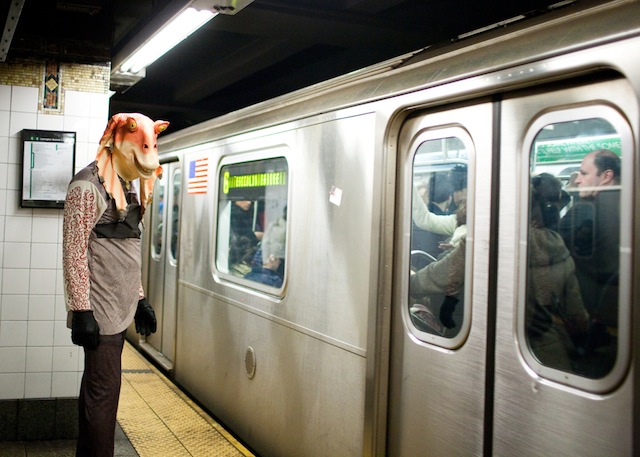 Jar Jar waits for the train. 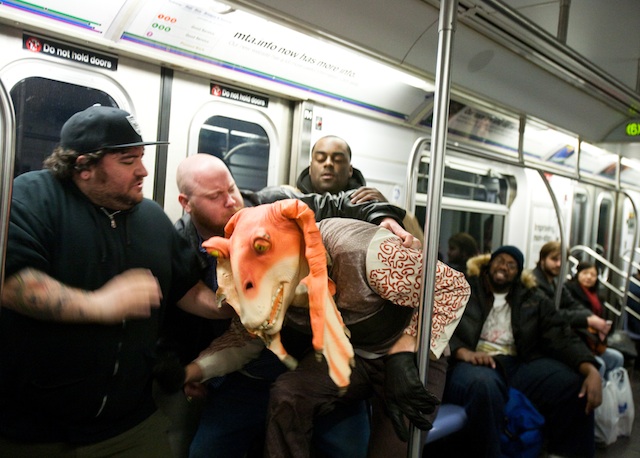 On a normal Improv Everywhere mission, we use the smallest cameras possible and film as discreetly as we can. Since this was a fake mission, secrecy wasn’t important. Before each take, I announced to everyone in the train, “Hey everybody, we’re shooting a student film. There’s going to be a fight between our actors. Just so you know it’s completely fake.” I thought it was important to give everyone a heads up, so no one worried about their safety or thought about alerting an MTA official. Most people just smiled and waited for the show to begin. We purposely staged this on the very back car of the train on a Saturday afternoon, so it wouldn’t be too crowded. 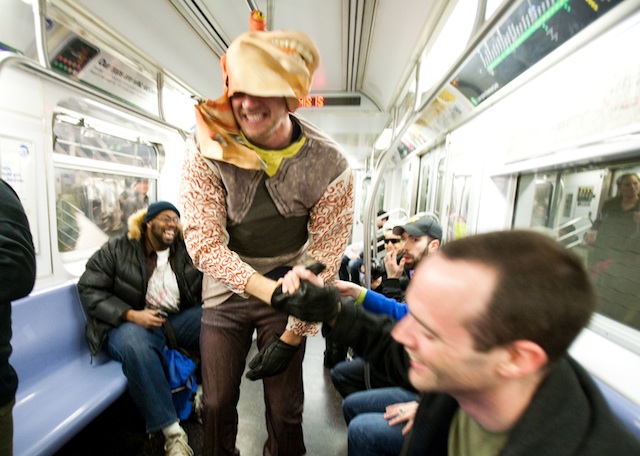 Agent Goldstein helps Agent Ace$Thugg up after a take. 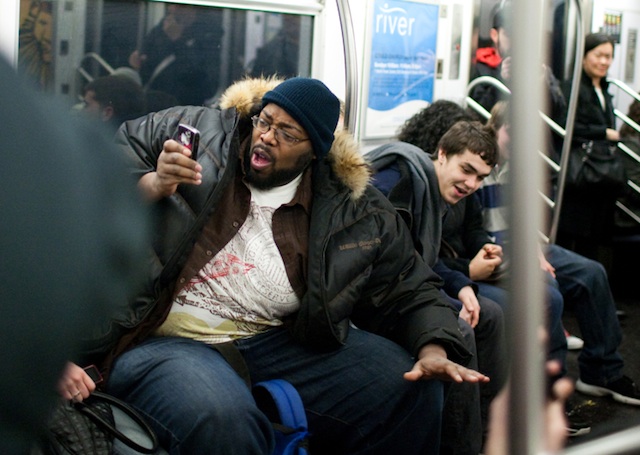 Agent Armstead gives a great reaction as an onlooker. 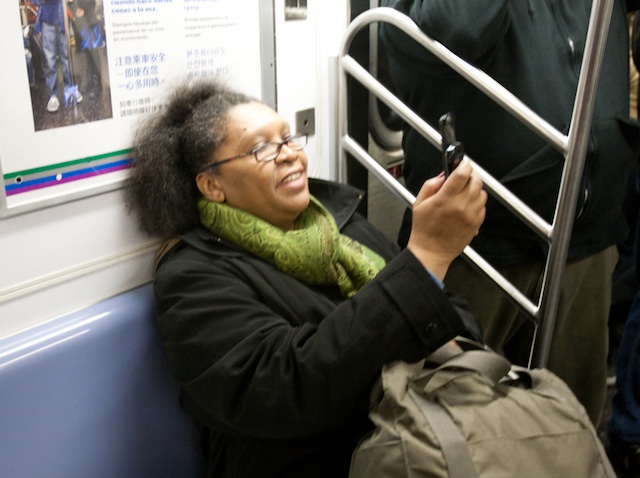 A woman snaps a picture of Jar Jar. 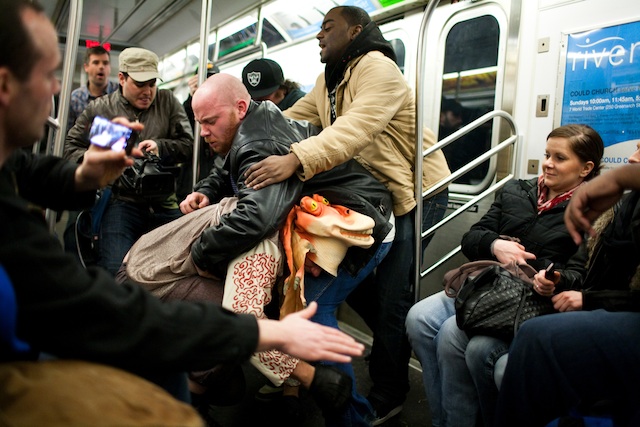 In order to make it believable, I thought it was important to have Jar Jar pretty obviously provoke the guys on the train. If some dude just attacked our actor out of nowhere, it wouldn’t seem real. Plus, the fact that we were trying to “press charges” on these guys after Jar Jar so clearly provoked the fight, would make us look really ridiculous and add to the hoax. 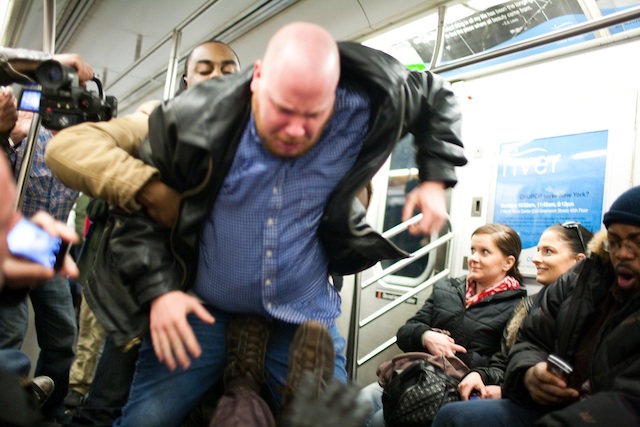 Agent Beyrer gets kicked in the nuts by Jar Jar as Agent Diston holds him back. 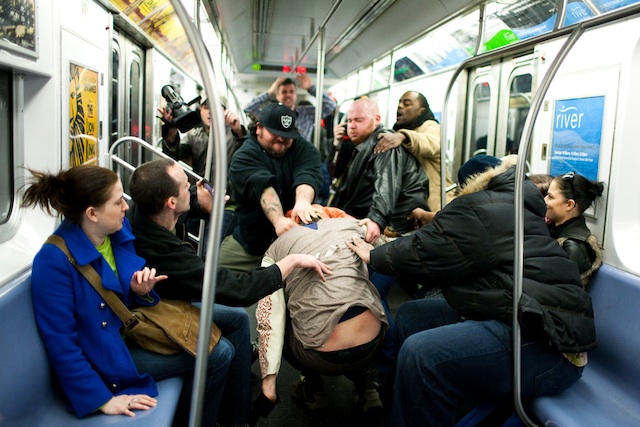 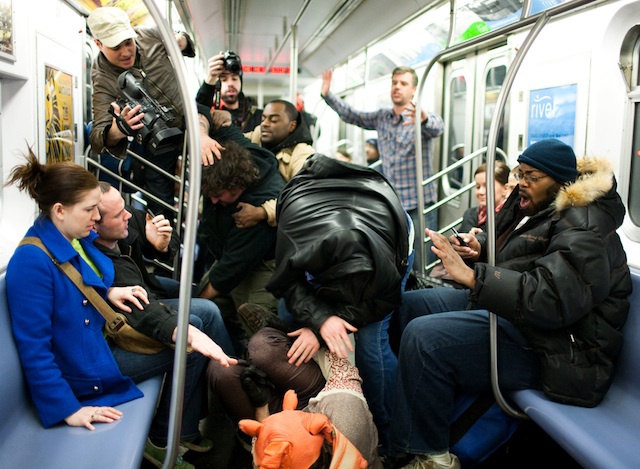 We wanted to create the feel of chaos on the train with each fight, so it was never scripted out exactly how it would go down. The premise of our fake mission was that Jar Jar would enter the train and ask strangers if they had seen Darth Maul. Agent Ace$Thugg’s voice isn’t that easy to hear through the mask, but he’s basically saying the same three lines over and over again: 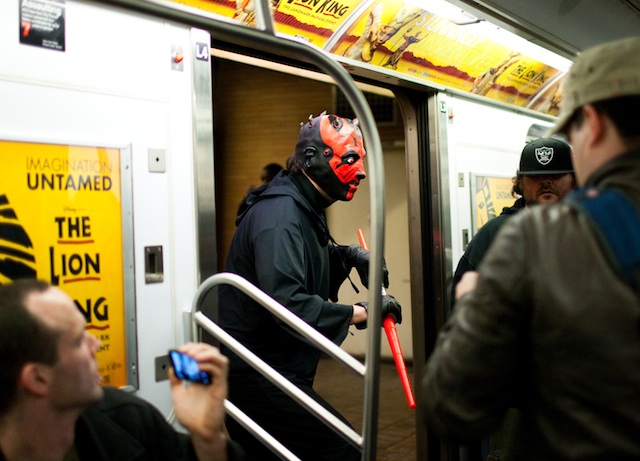 Just as Darth Vader made a surprise appearance by boarding at a later stop in Star Wars Subway Car, Darth Maul would enter this time around and hunt down Jar Jar. We timed it out so that the three attackers would be trying to leave the train right when Maul enters. 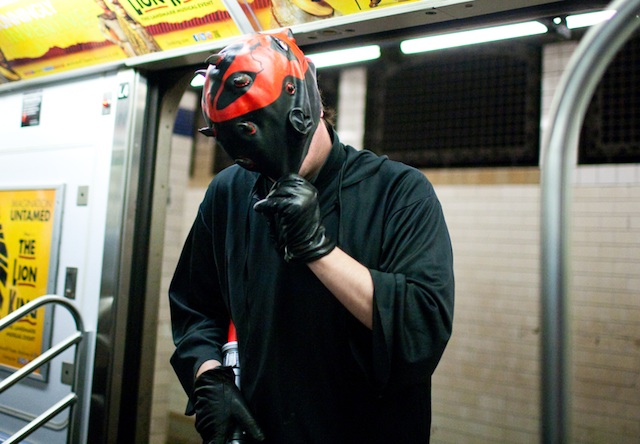 Agent Scordelis accidentally puts his mask on backwards before a take. 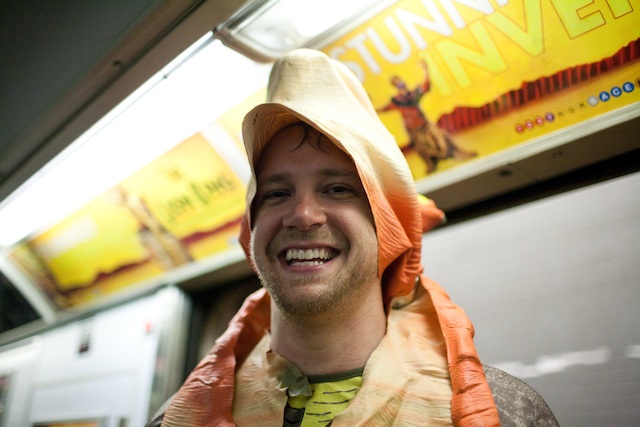 Agent Ace$Thugg smiles after getting fake beat up.

We probably staged the fight a dozen times on the six train, heading uptown and then back downtown. The final video mostly used a combination of two takes, both on the same car (so that the ads and people in the background would be consistent.) 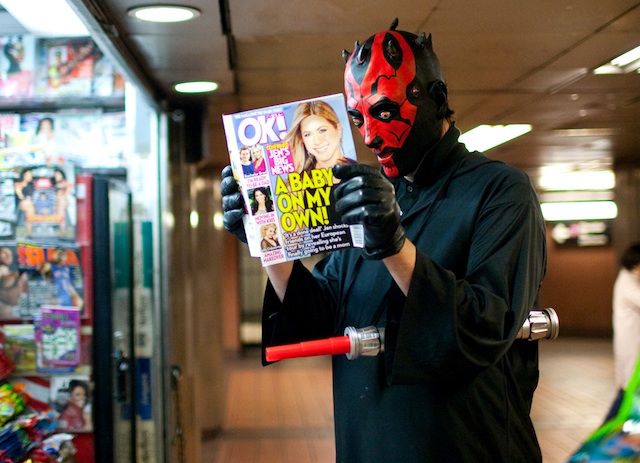 We had to figure out a reason we would actually post a “mission gone wrong” on YouTube. If this had really happened, there would be no reason to upload a video of us getting beat up for the world to see. So I concocted the story of Agent Ace$Thugg wanting to press charges and that we were looking for the three men.

Hopefully we will stage a proper sequel to Star Wars Subway Car one day, but I can guarantee you that Jar Jar won’t be involved.

For reference, here is the original hoax video: