Madeline Hoak, Museum of the City of New York

For our latest mission, we surprised random people with an unexpected dance party on the streets of New York. We placed a decal (designed in the style of the ubiquitous social distancing circles) that read “stand here for dance party” on the ground in Grand Army Plaza in Manhattan. When unsuspecting New Yorkers and tourists followed instructions and stood on the decal, they soon found themselves surrounded by a 100-person dance party featuring a professional b-boy dance crew and a vintage 1980s boombox.

This project is made in collaboration with the Museum of the City of New York and their new exhibition New York, New Music: 1980-1986.

Our entire cast and crew were fully vaccinated for COVID-19. 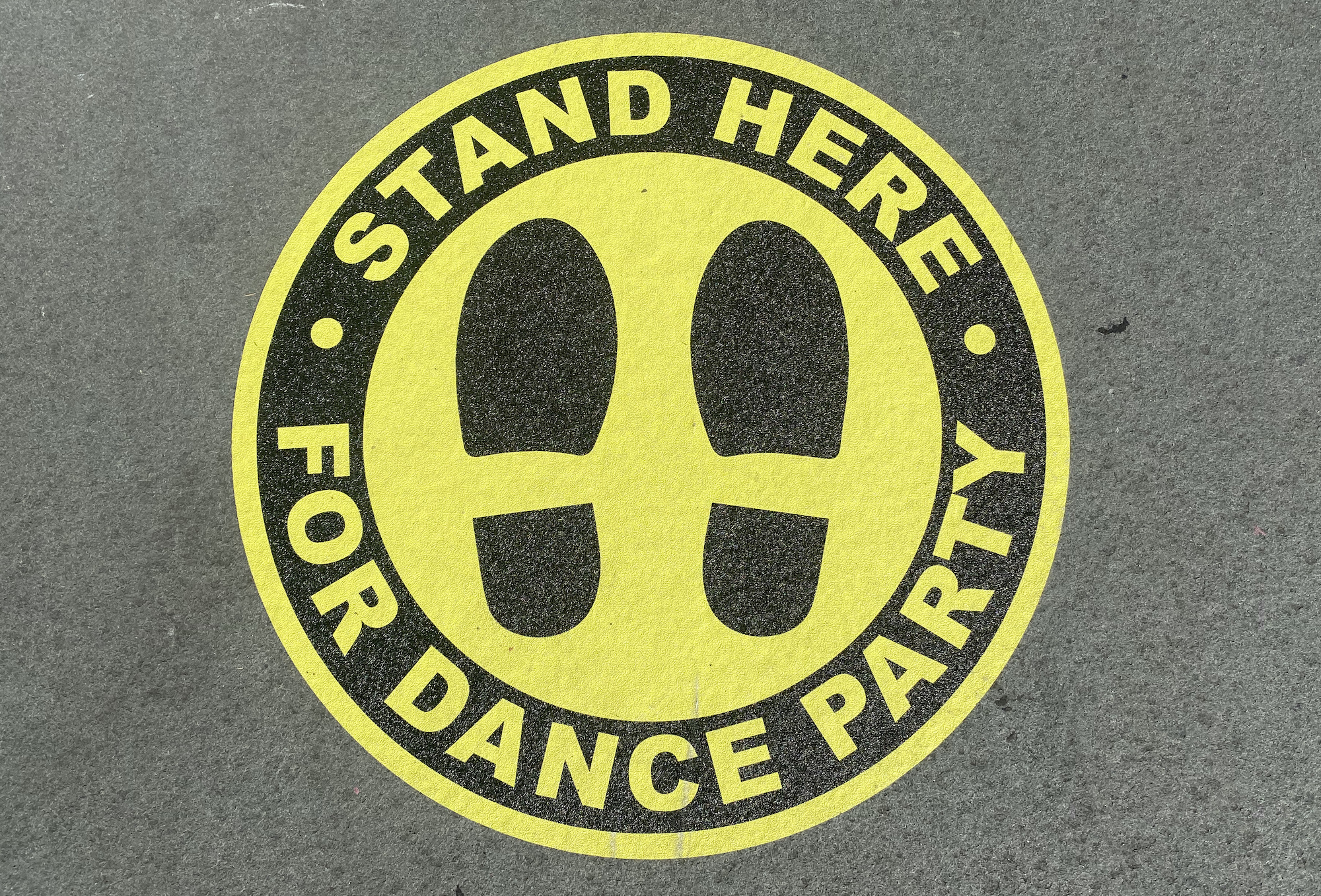 As a group that specializes in large-scale surprise moments in public spaces, often involving large groups of people, the past 16 months have been rough. To keep social distance, we had to resort to staging a project on a raft in the middle of the East River. This summer things are finally starting to turn a corner in New York, with very high vaccination rates and very low COVID rates. When we had an opportunity to do a music-themed project with the Museum of the City of New York, we knew it was time to do something big again. 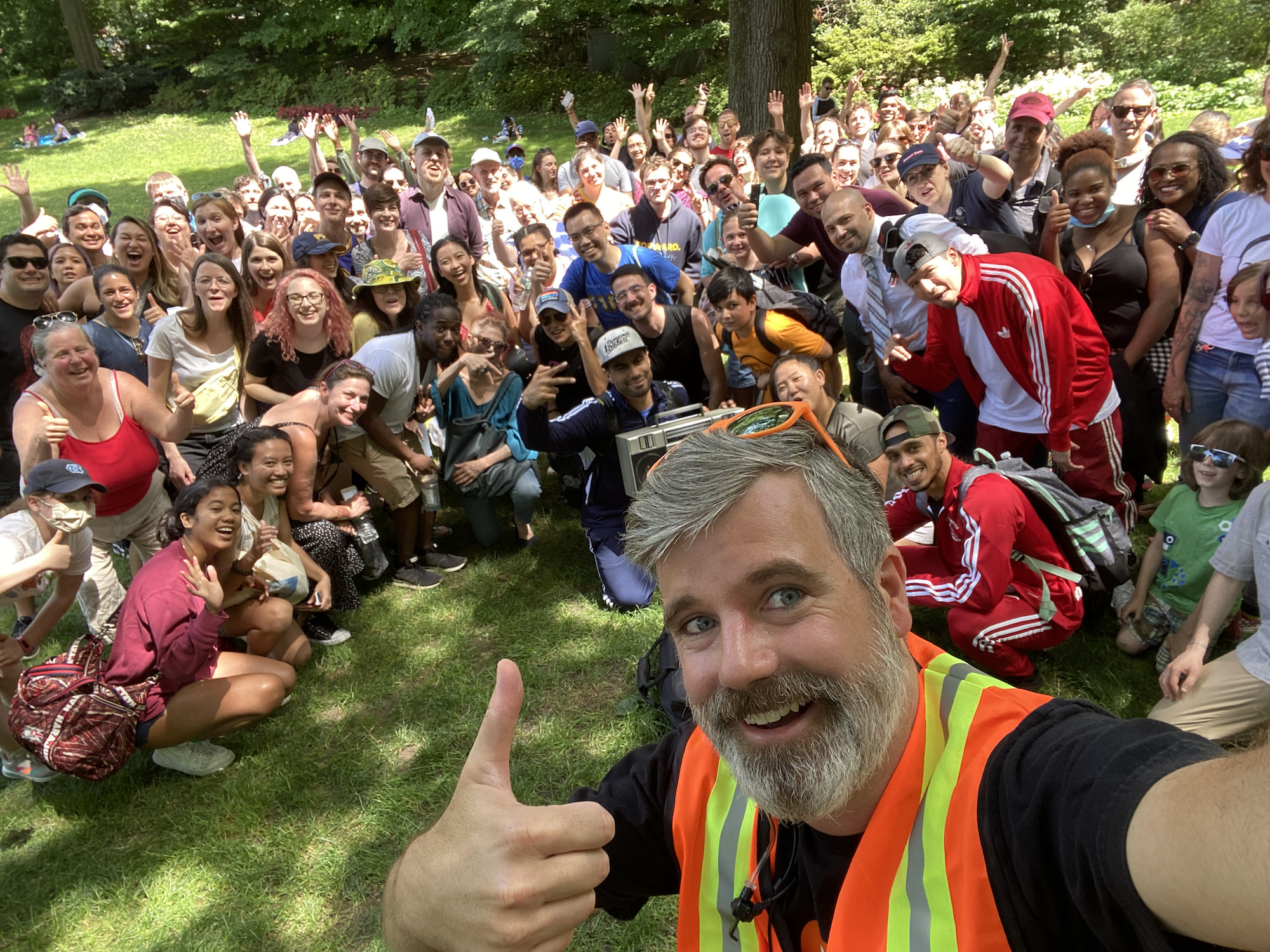 We reached out to our NYC mailing list and recruited about 100 participants for the mission. For many, it was their first large public gathering in a long time. Everyone was fully vaxed! 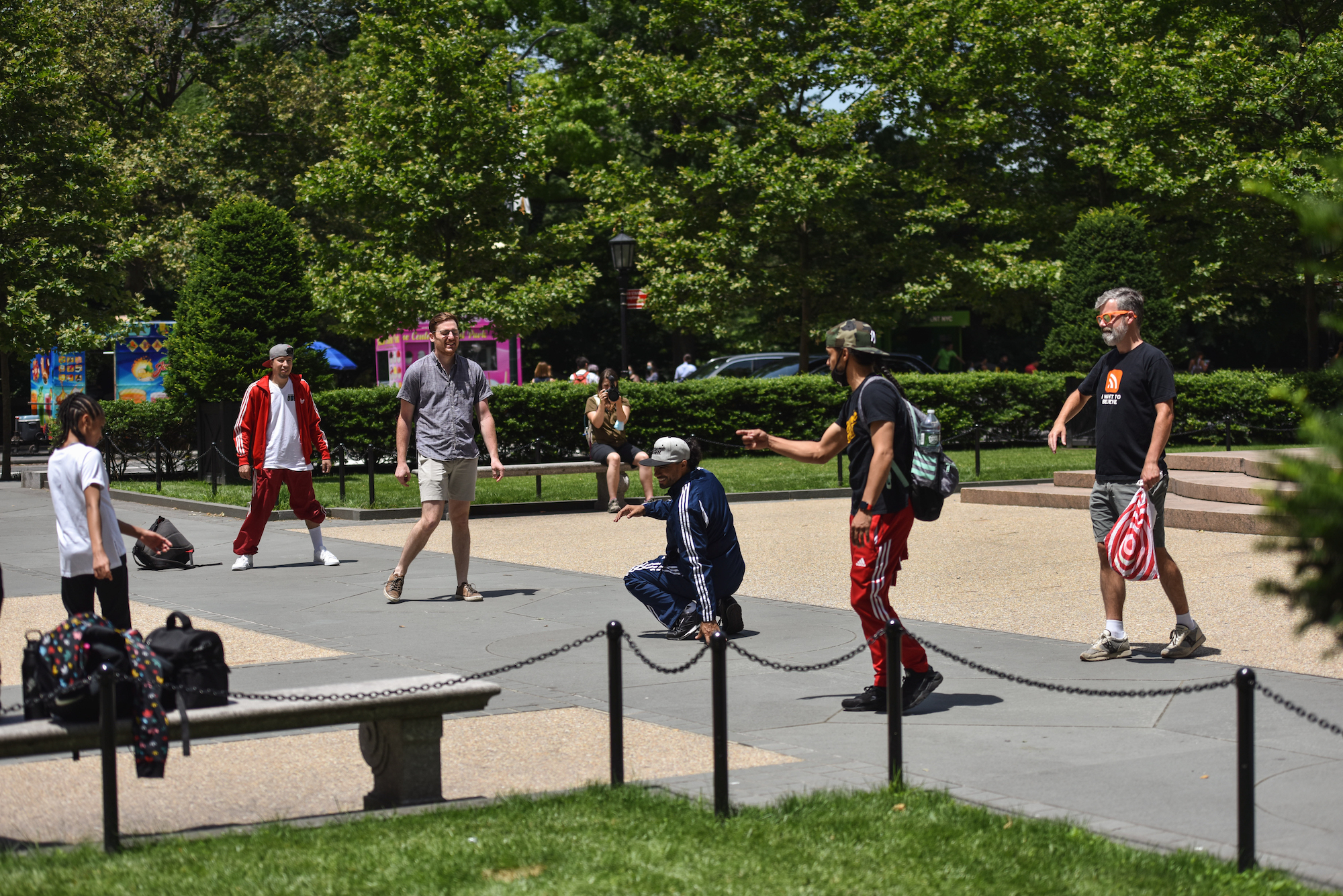 We also brought Victor “Kid Glyde” Alicea and his crew the Dynamic Rockers on board. Kid Glyde inherited the crew from his dad, who was a member of the group back in the early 1980s. 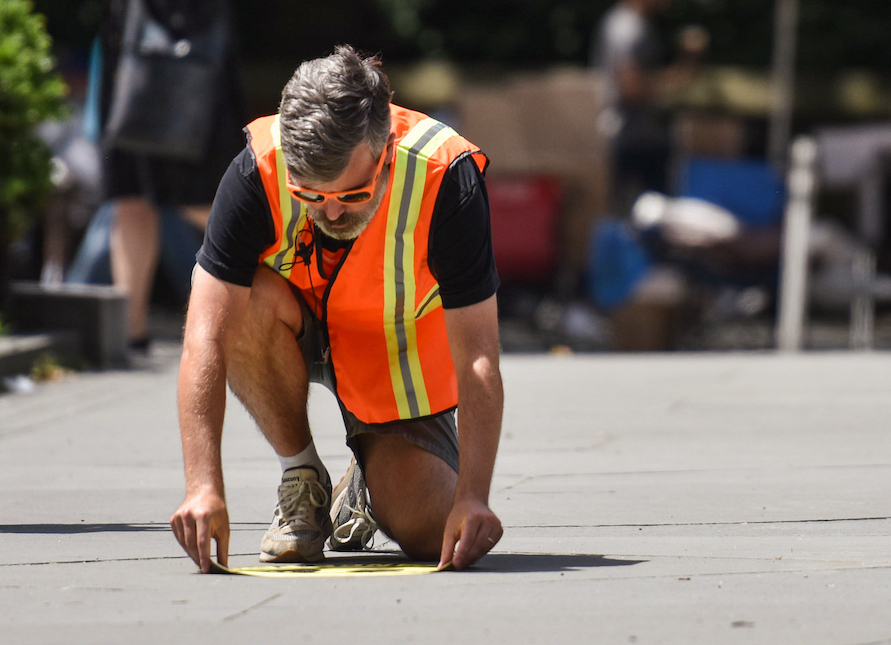 Agent Andrew Soltys designed the decal to look exactly like the social distancing circles that have spread all over the world during the pandemic. I placed it on the ground in the middle of Grand Army Plaza, a big open space near the southeast corner of Central Park. After surreptitiously installing the decal, I walked away and we waited for someone to discover it. In the meantime, our 100 undercover agents were blending in the area, walking around the sidewalks or sitting on benches. 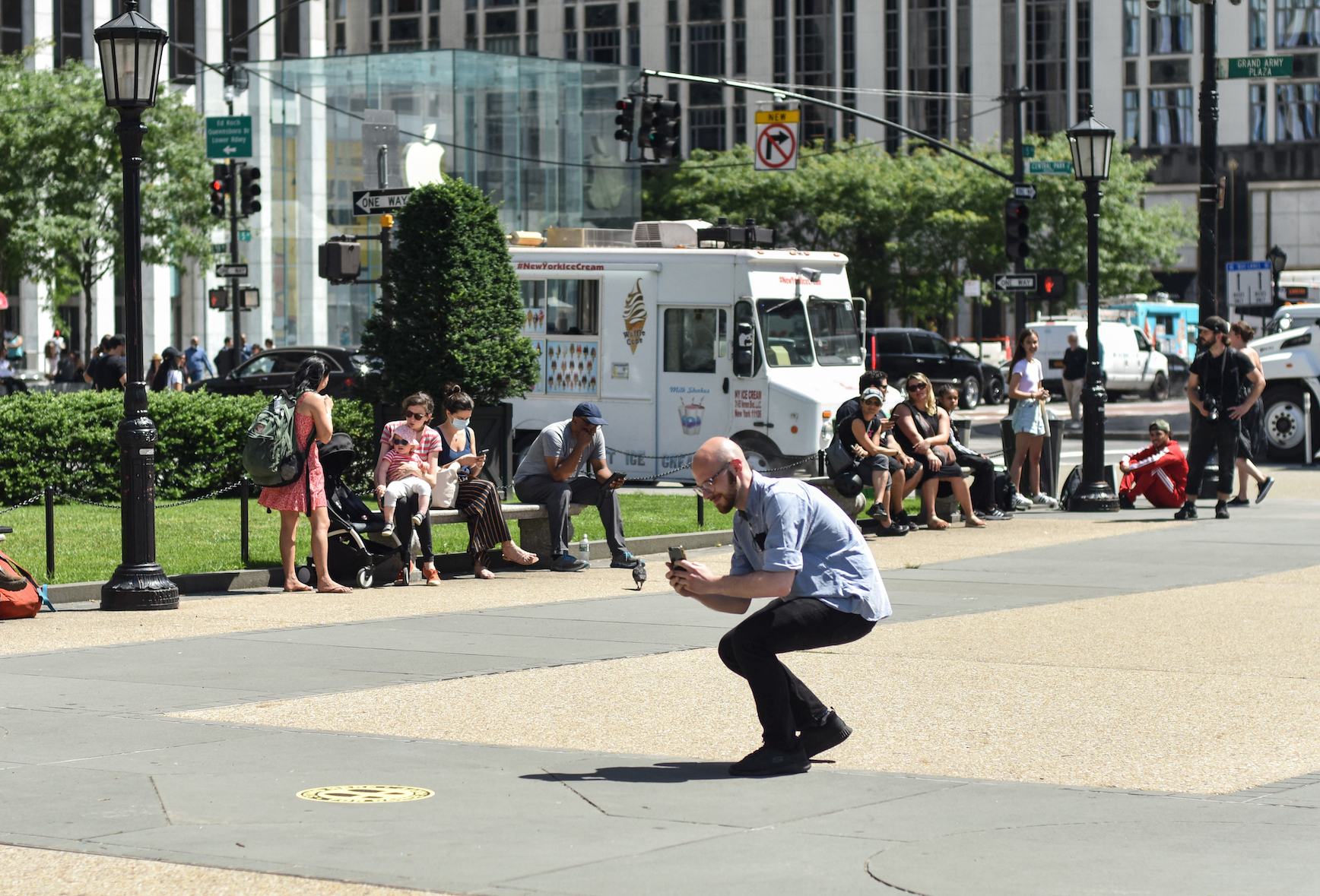 Many people walked by the decal without noticing or just assuming it was one of the many social distancing stickers all over the city. A few people stopped and inspected it and took photographs. 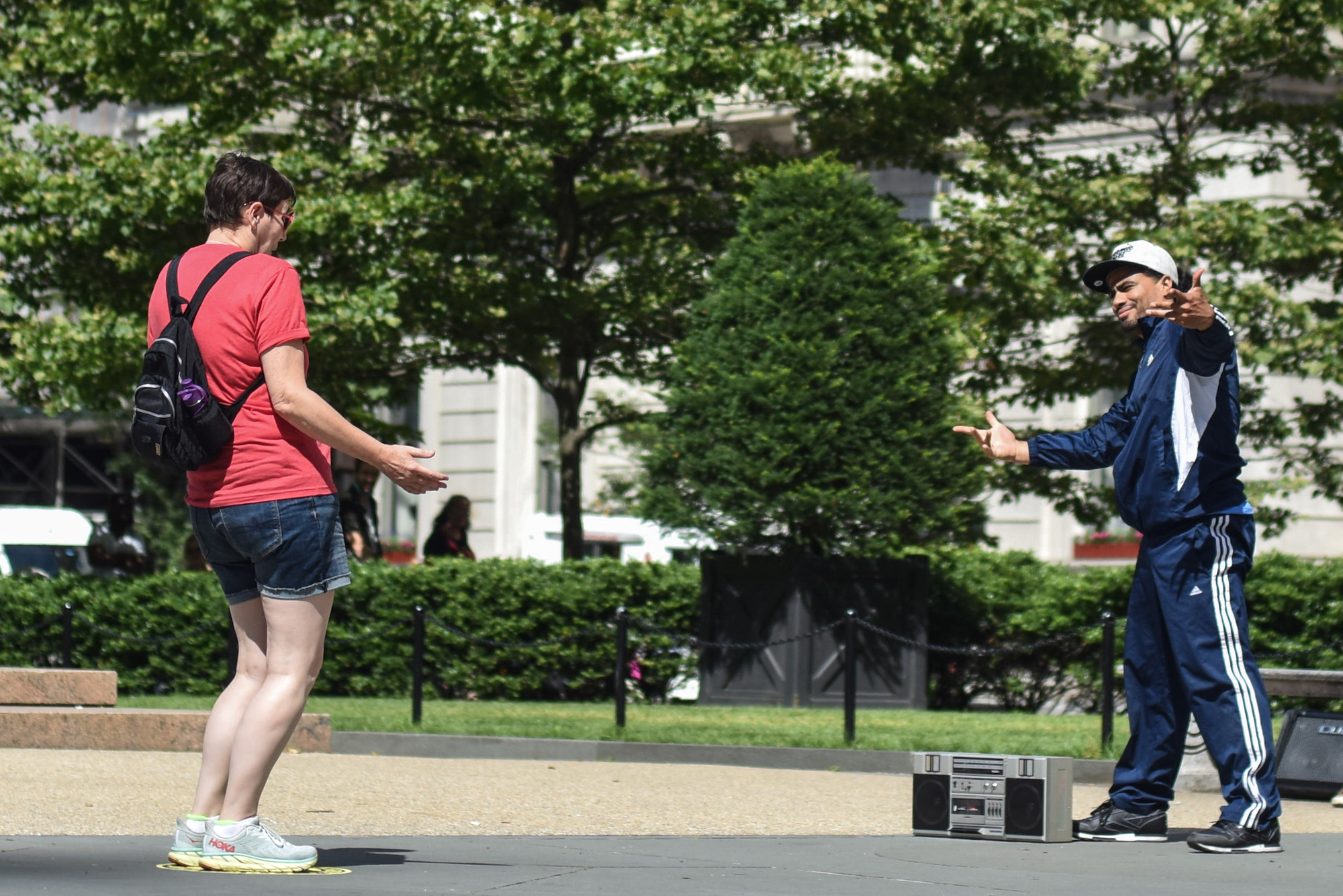 Whenever someone stood on the decal, they triggered a massive party. Music immediately began blaring from Kid Glyde’s boombox as he walked from around the corner and up to the unsuspecting person to get the party started. 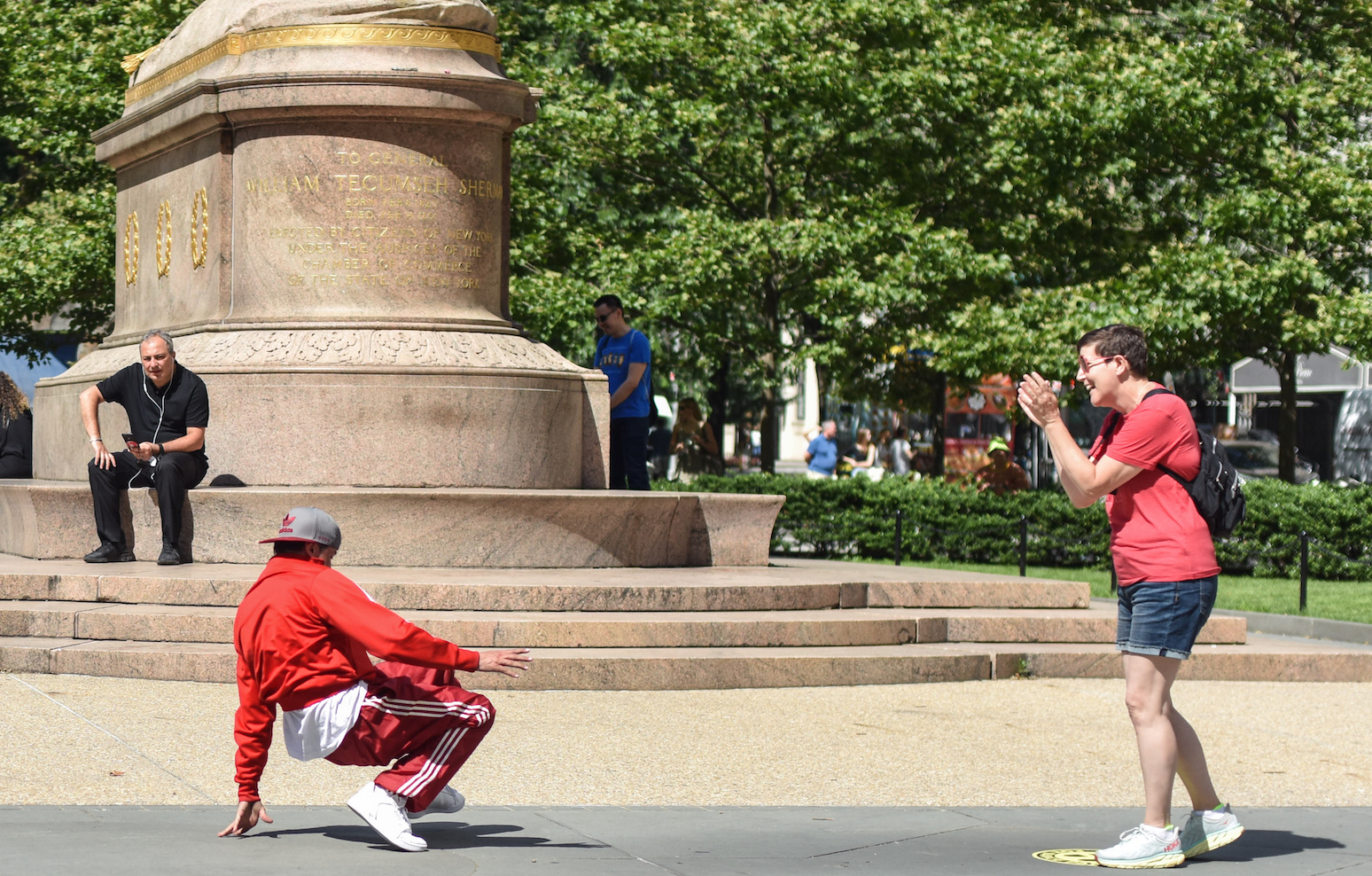 Kid Glyde began dancing and the other members of the Dynamic Rockers started entering from all directions. The people standing on the sticker were surprised but quickly got on board with the fun. 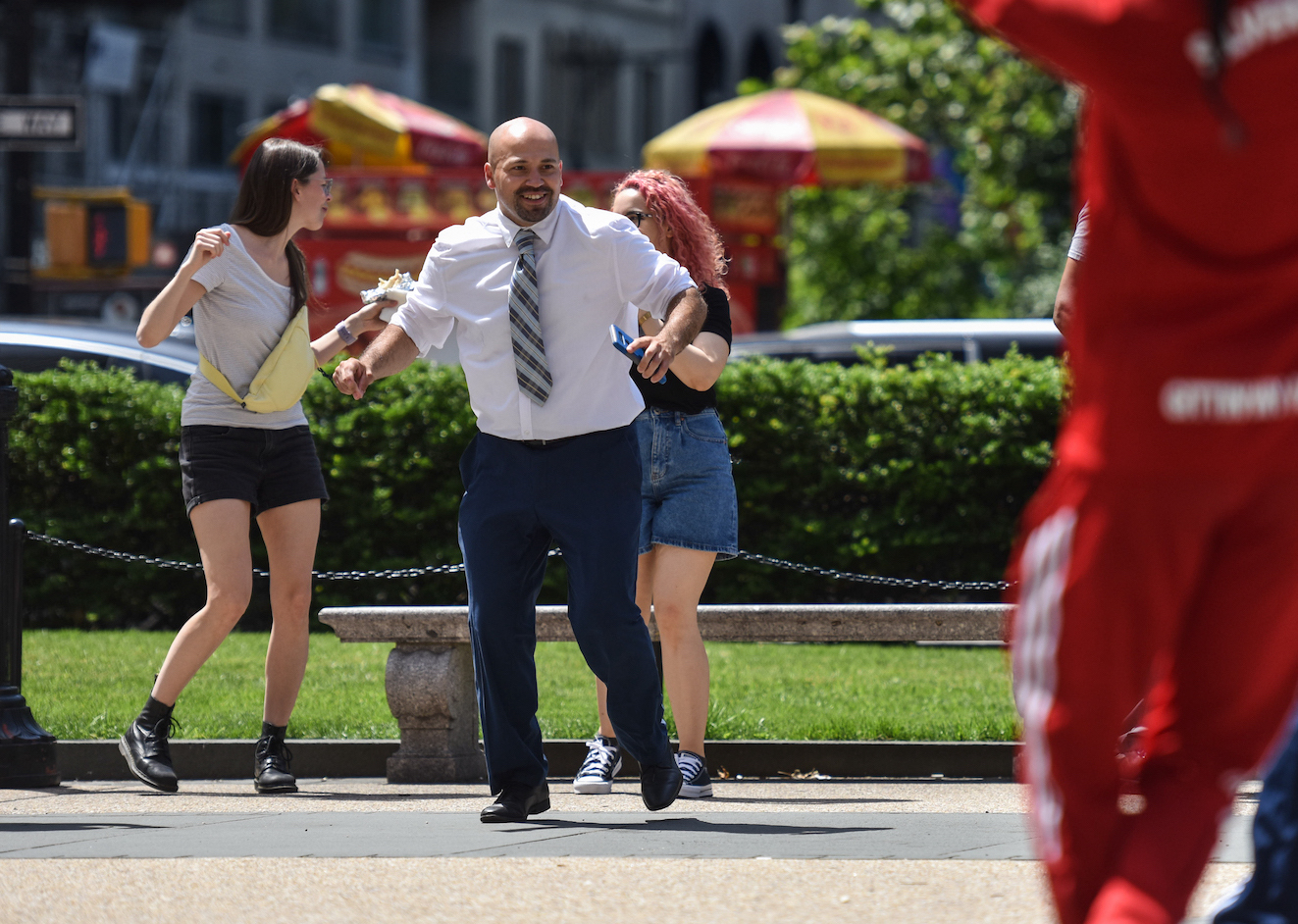 Another member of the Dynamic Rockers, Jayson “Mouse” Vasquez, dressed in a shirt and tie and pretended to be a business man on his lunch break. He then started dancing as well, to the delight of all. 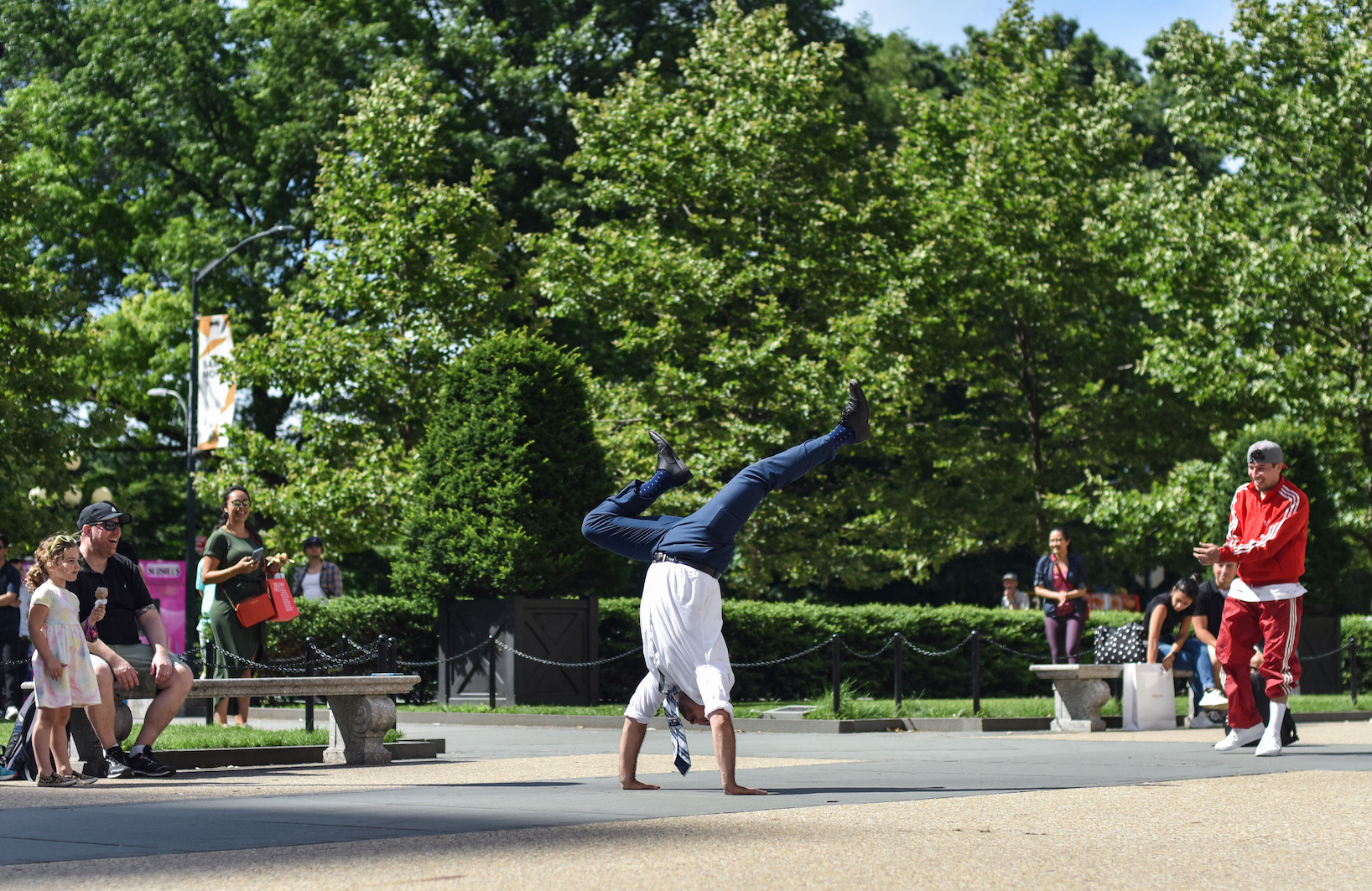 Our undercover agents started entering the space in small groups. This made it appear like they were just regular people off the street spontaneously joining the party, which inspired people not in on it to do the same. Things escalated pretty quickly. 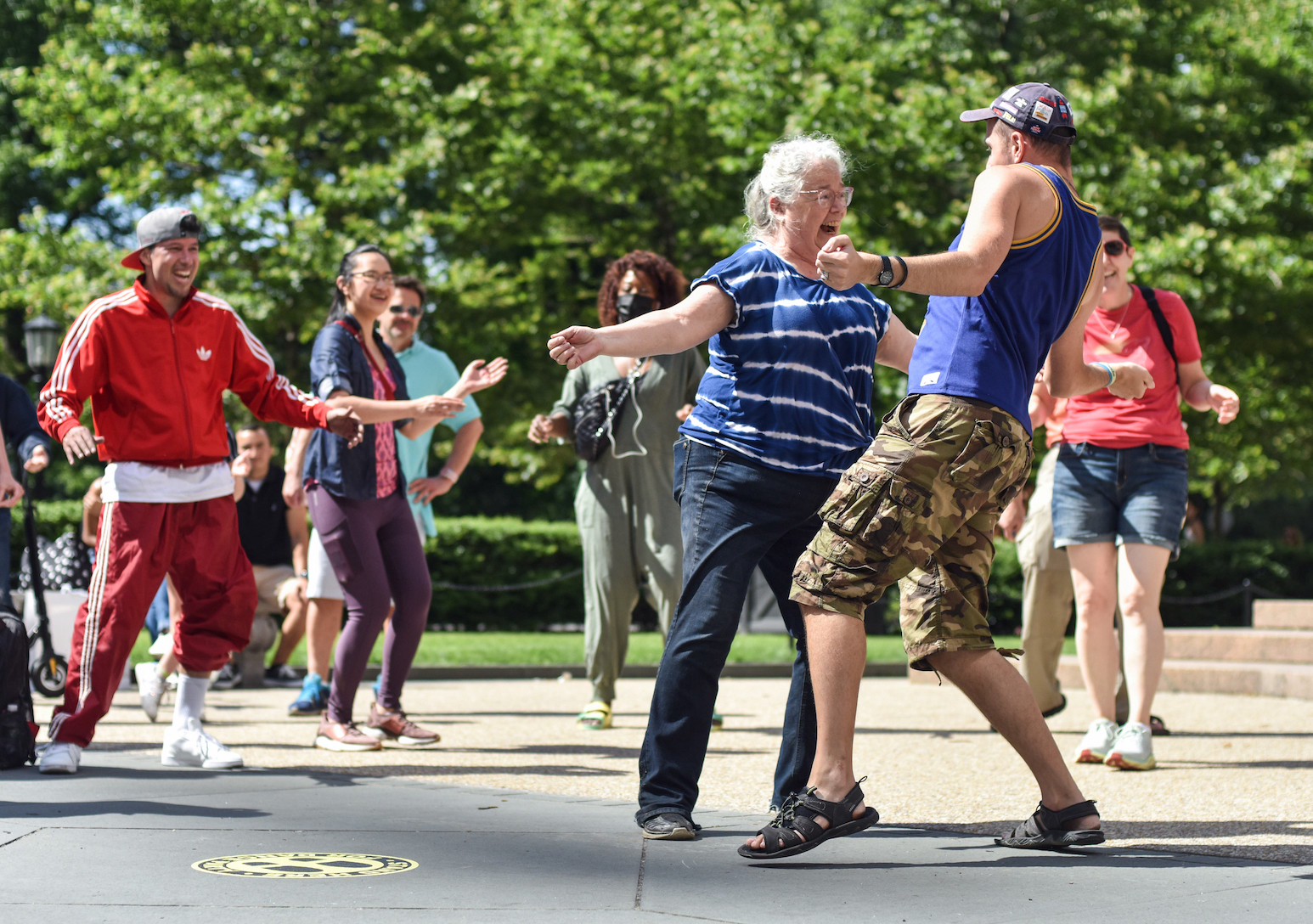 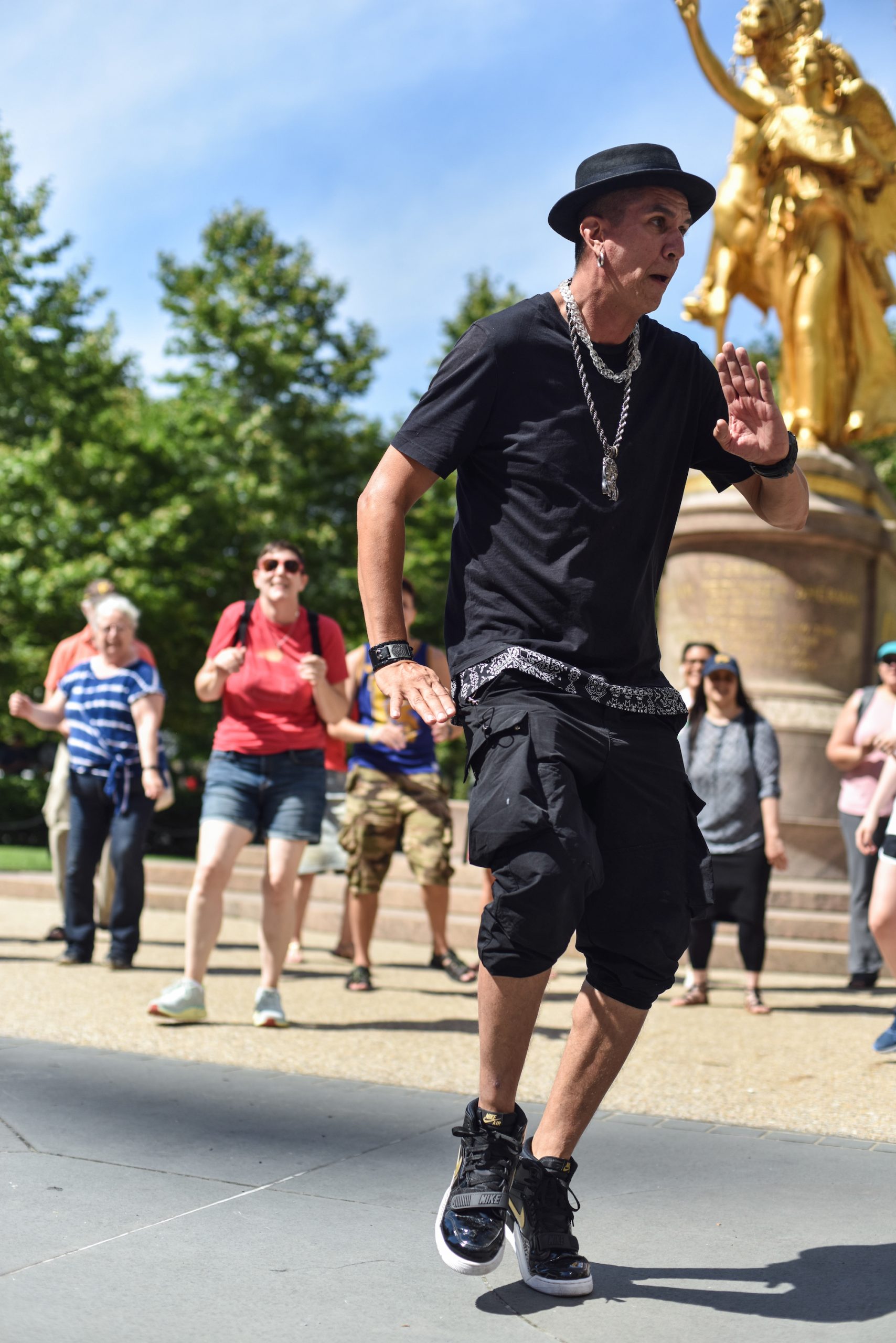 This guy dressed in black was not part of our group, but he had some great moves. 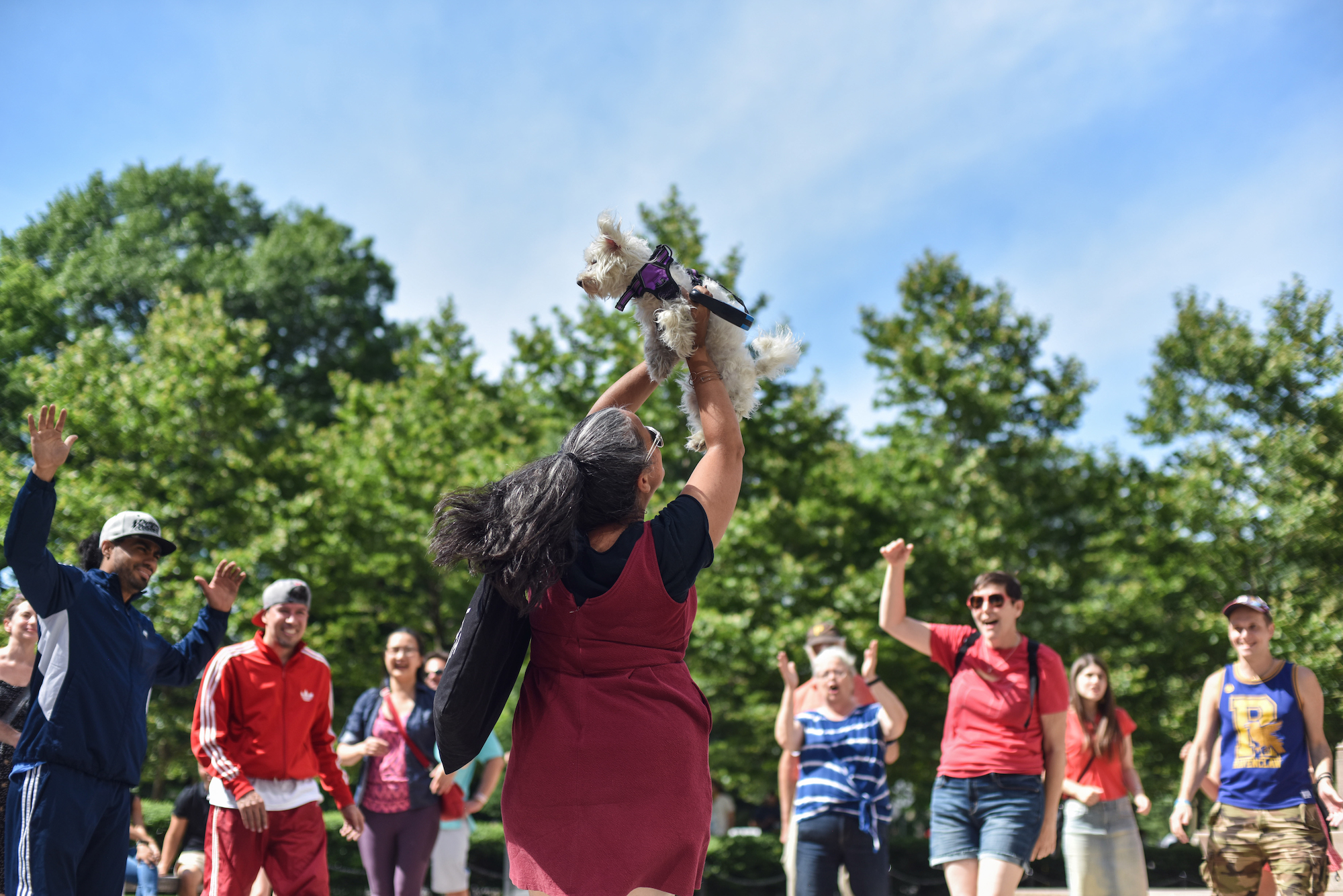 A dog even joined the party. 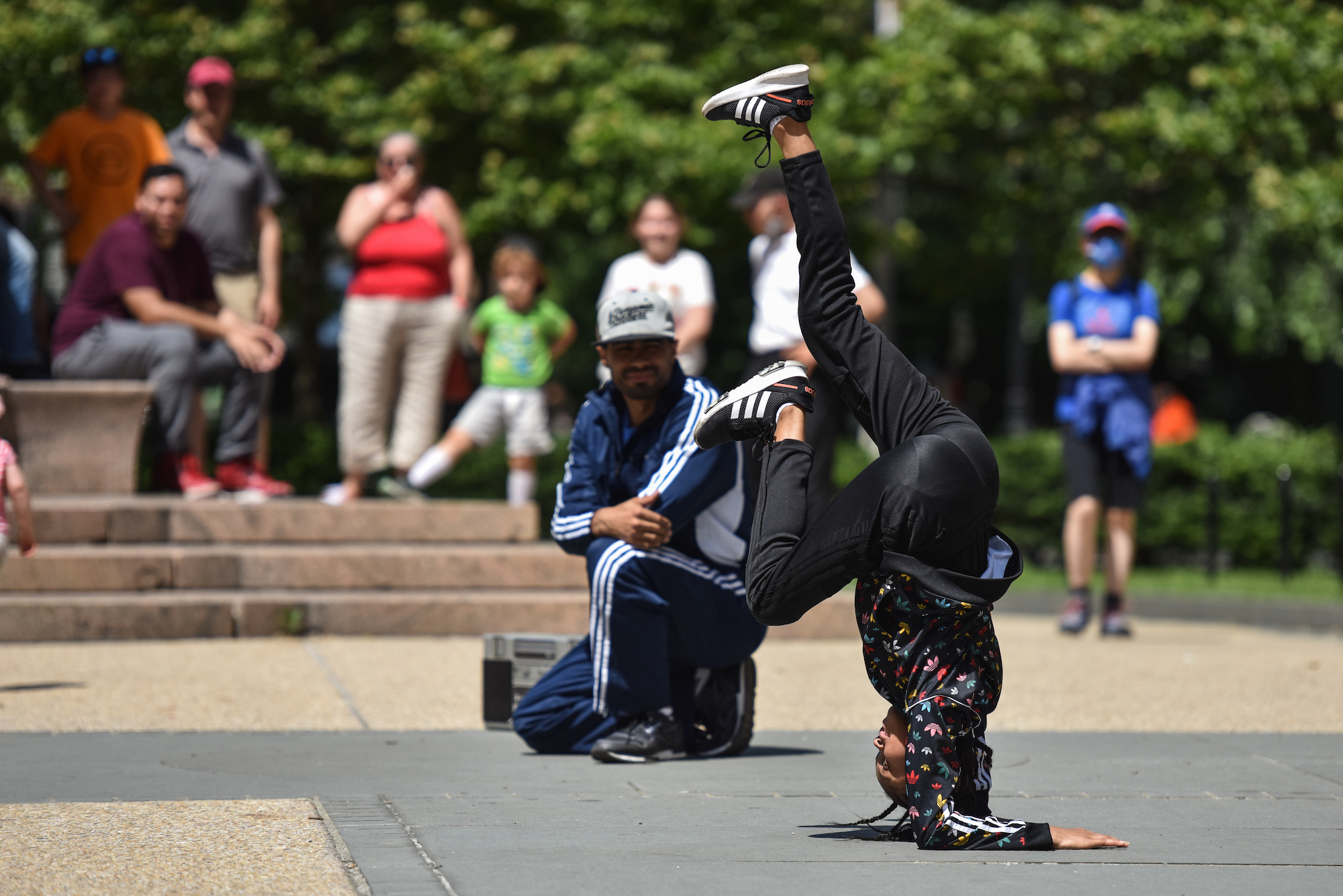 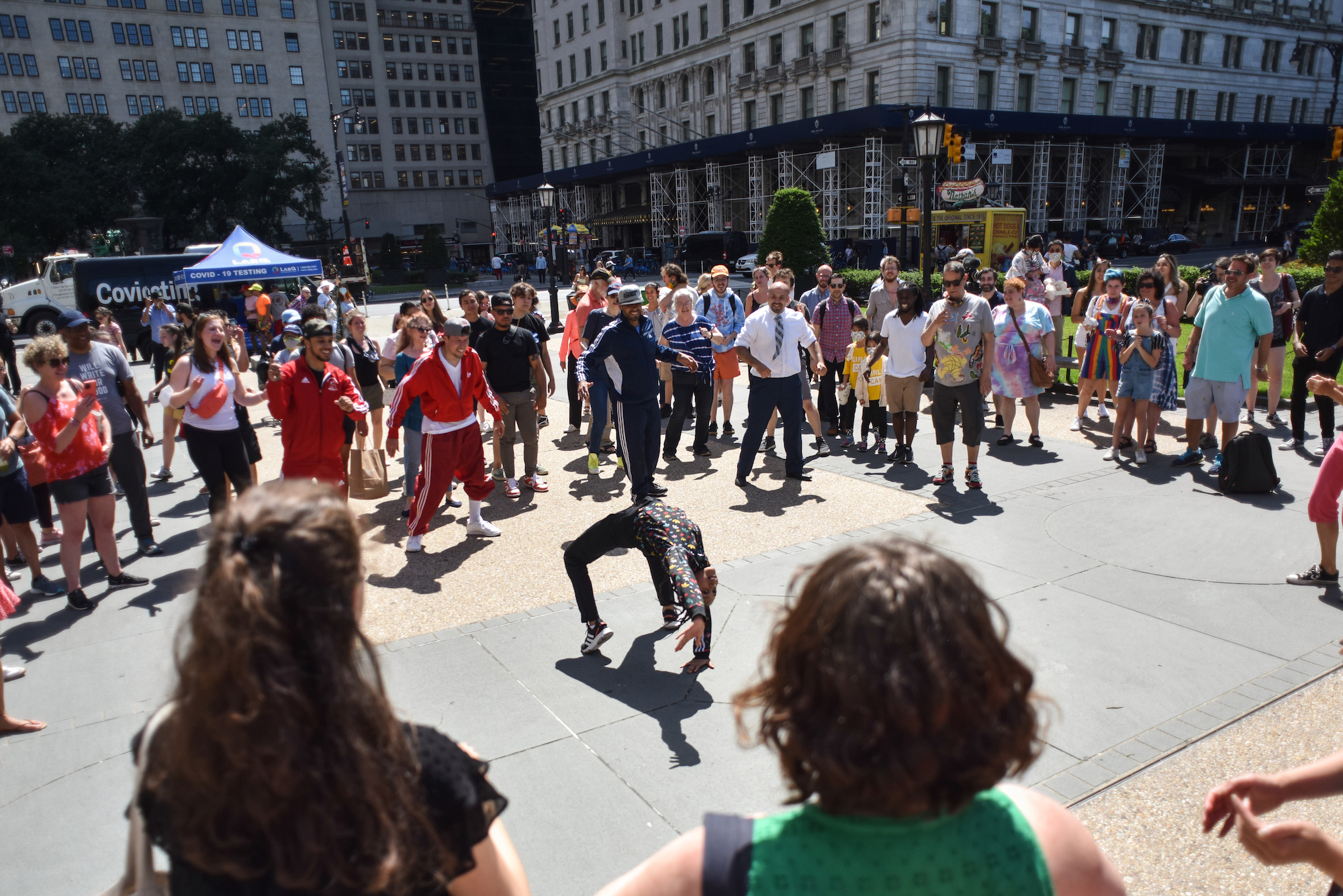 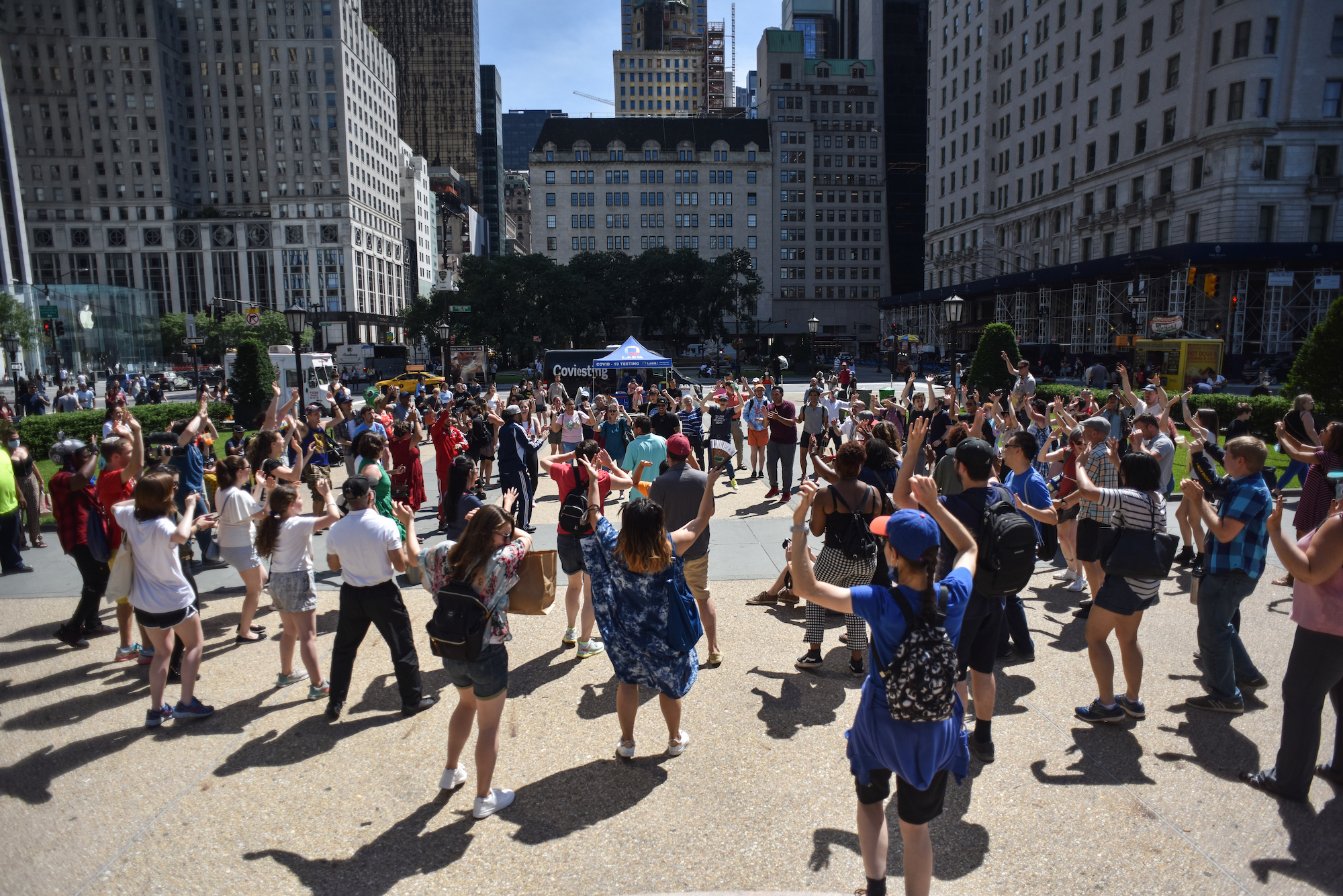 As more and more undercover performers and unsuspecting bystanders joined in, the party got bigger and bigger. A dance circle naturally formed with people taking turns in the spotlight. 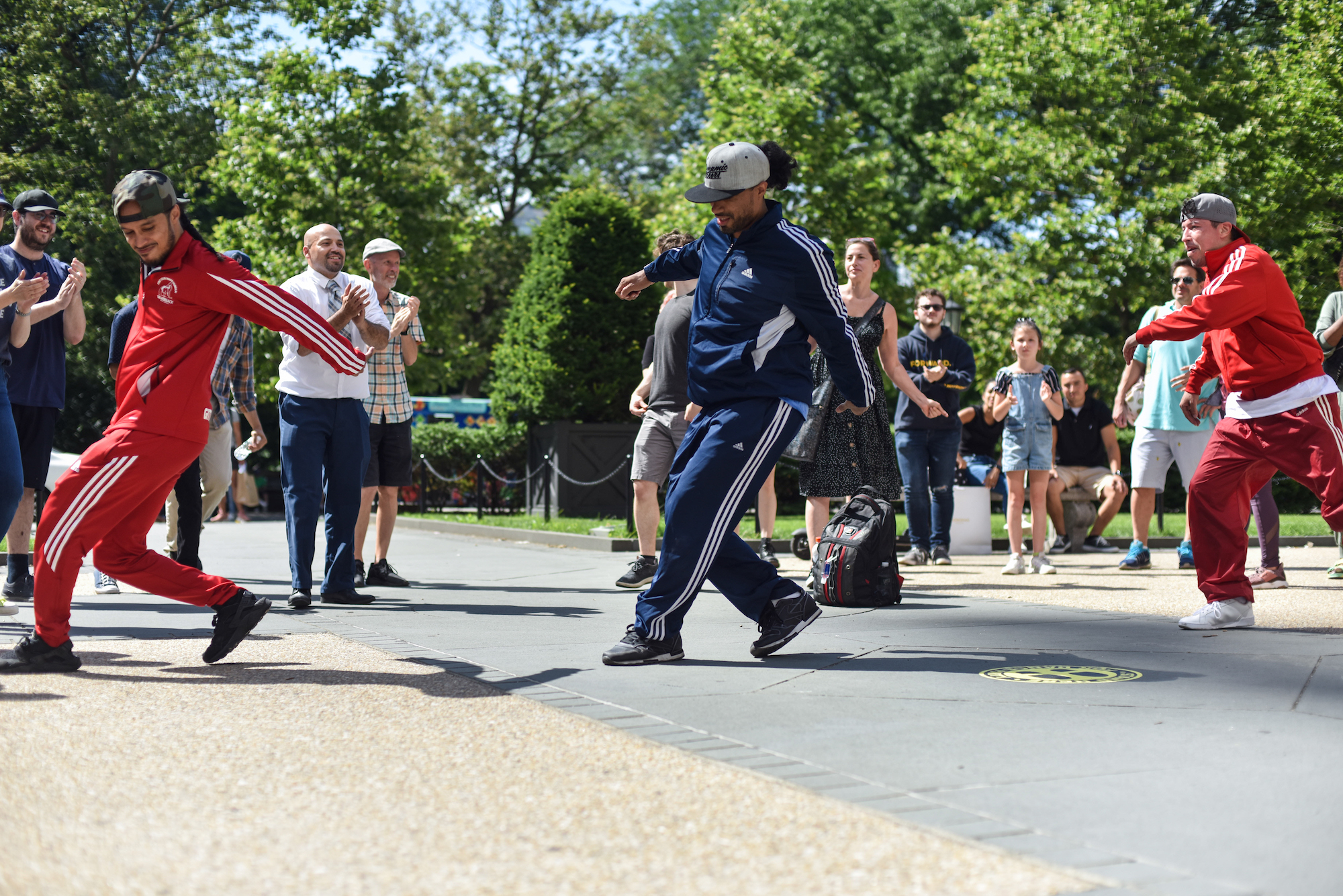 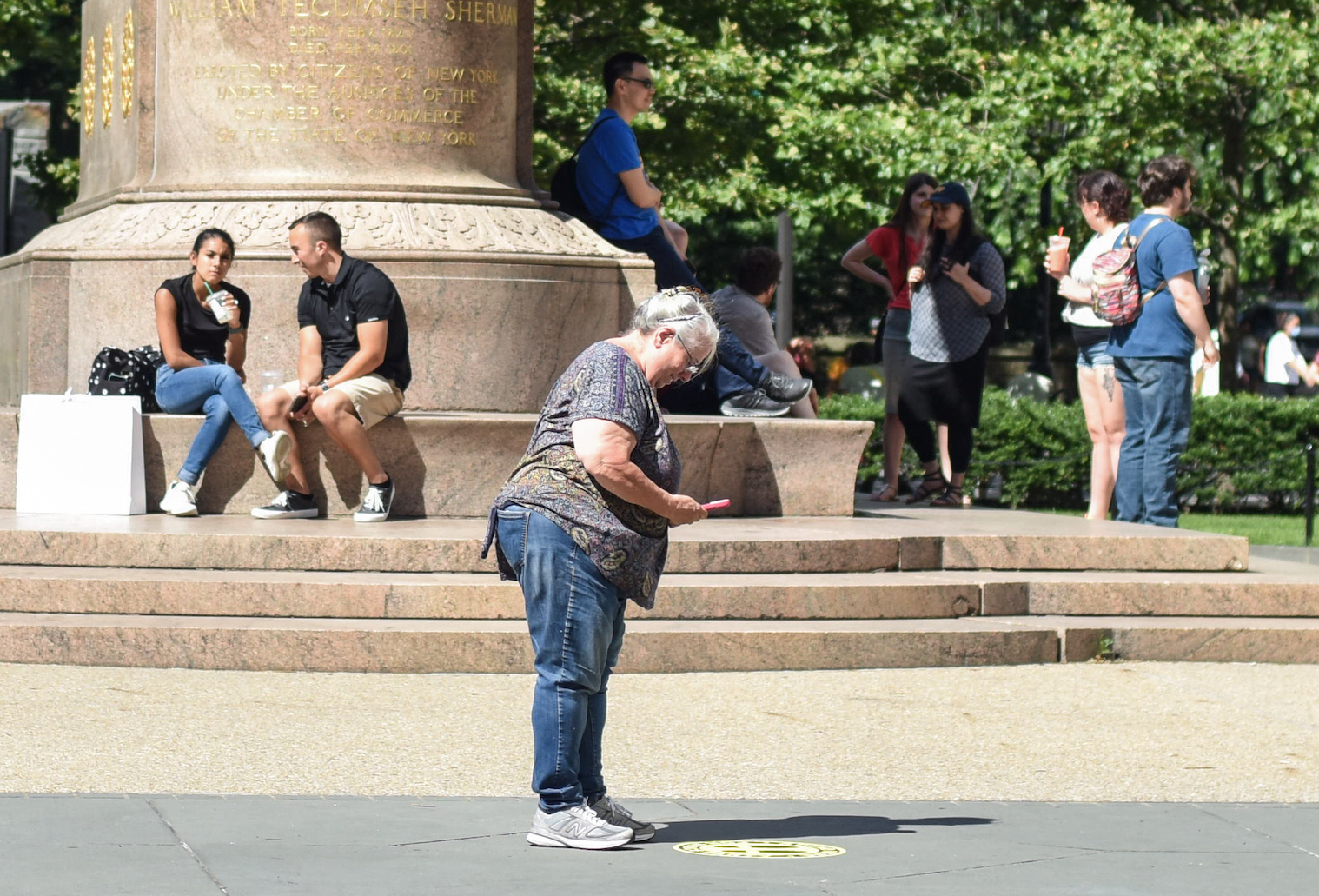 We staged the party 8 times over the course of about an hour and half. We rested in between takes and let the crowd turnover. 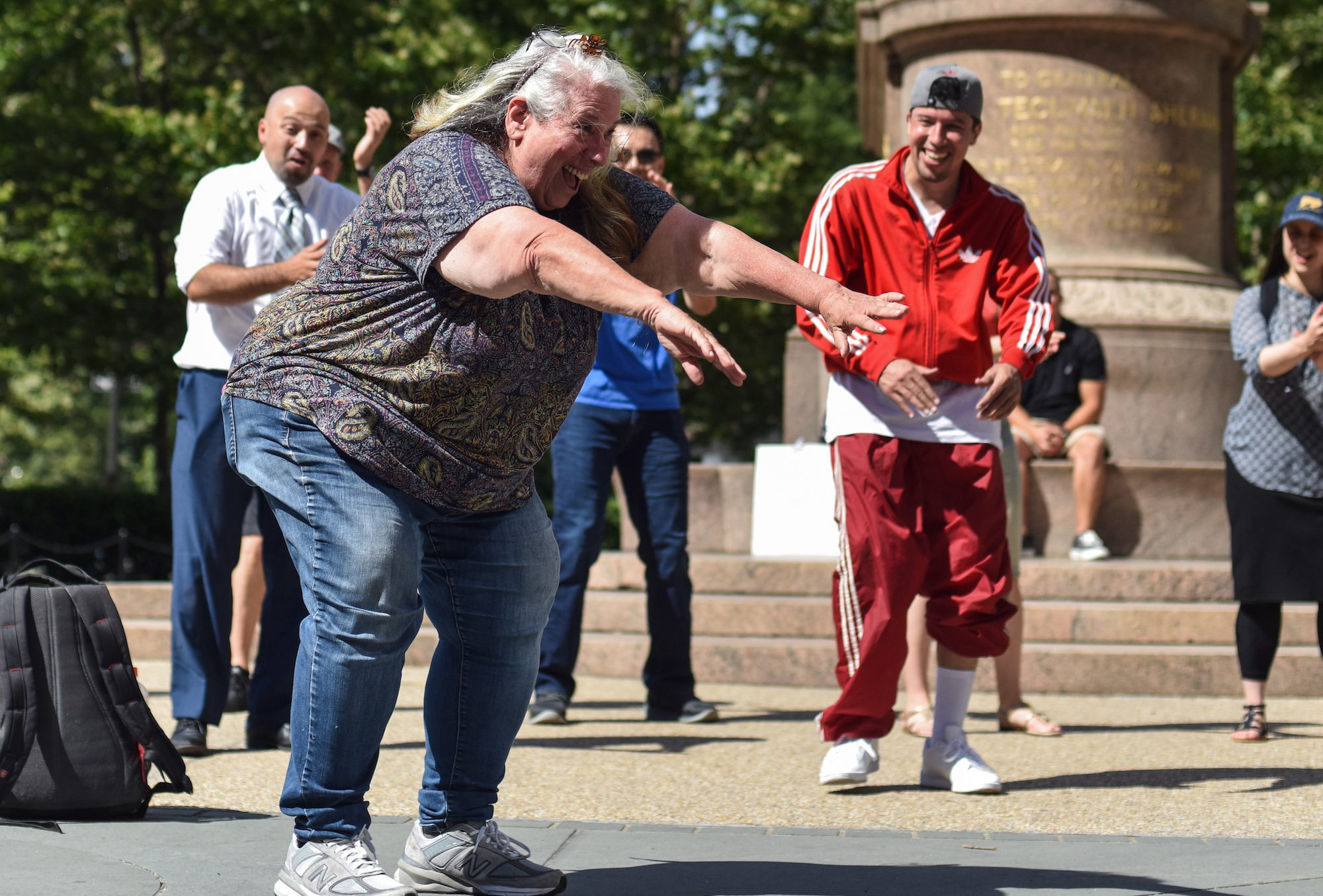 Each person who stepped on the decal brought new energy to the party. 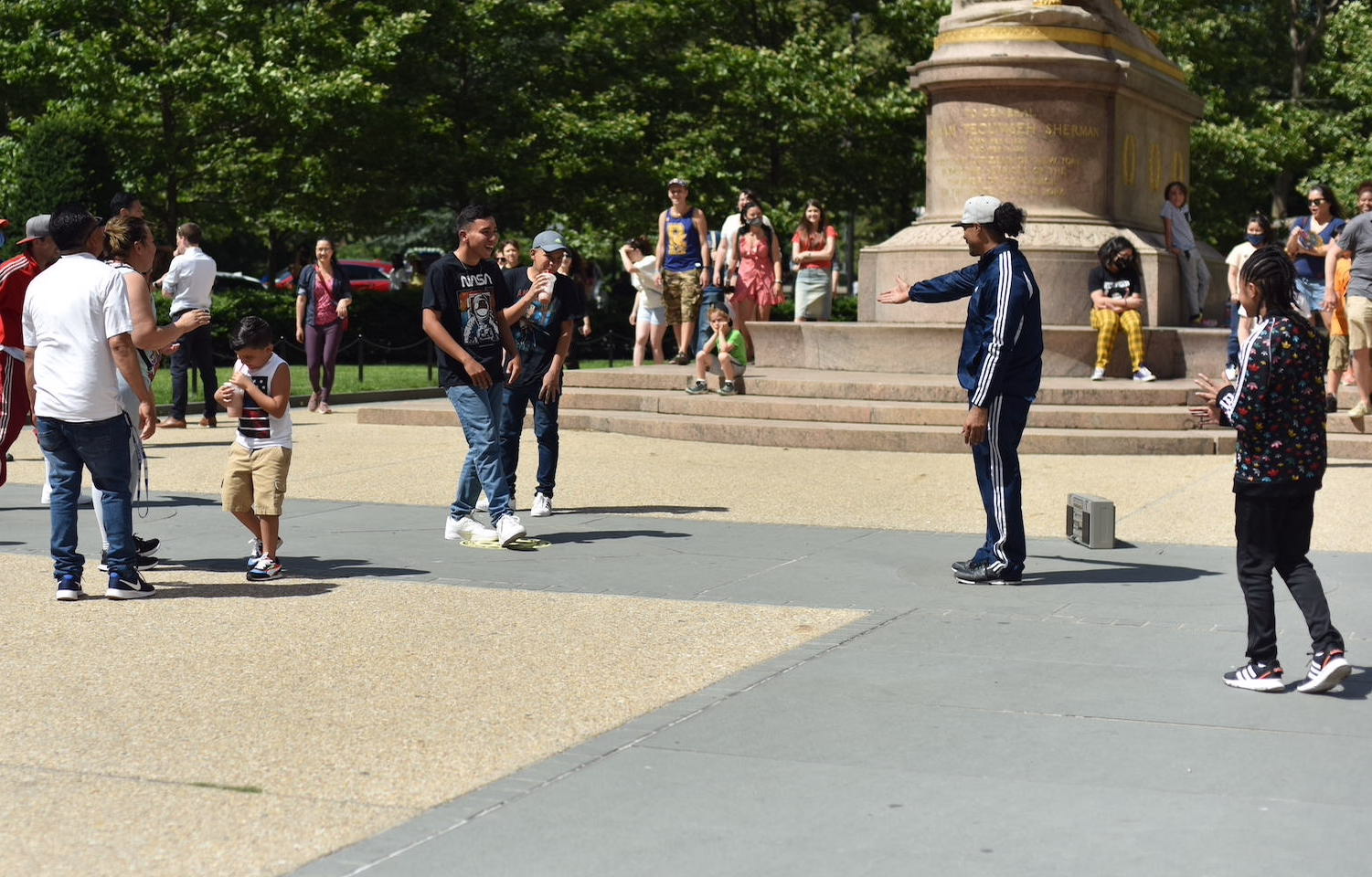 A family of four stepped on the sticker, and Kid Glyde challenged one of the kids to dance. 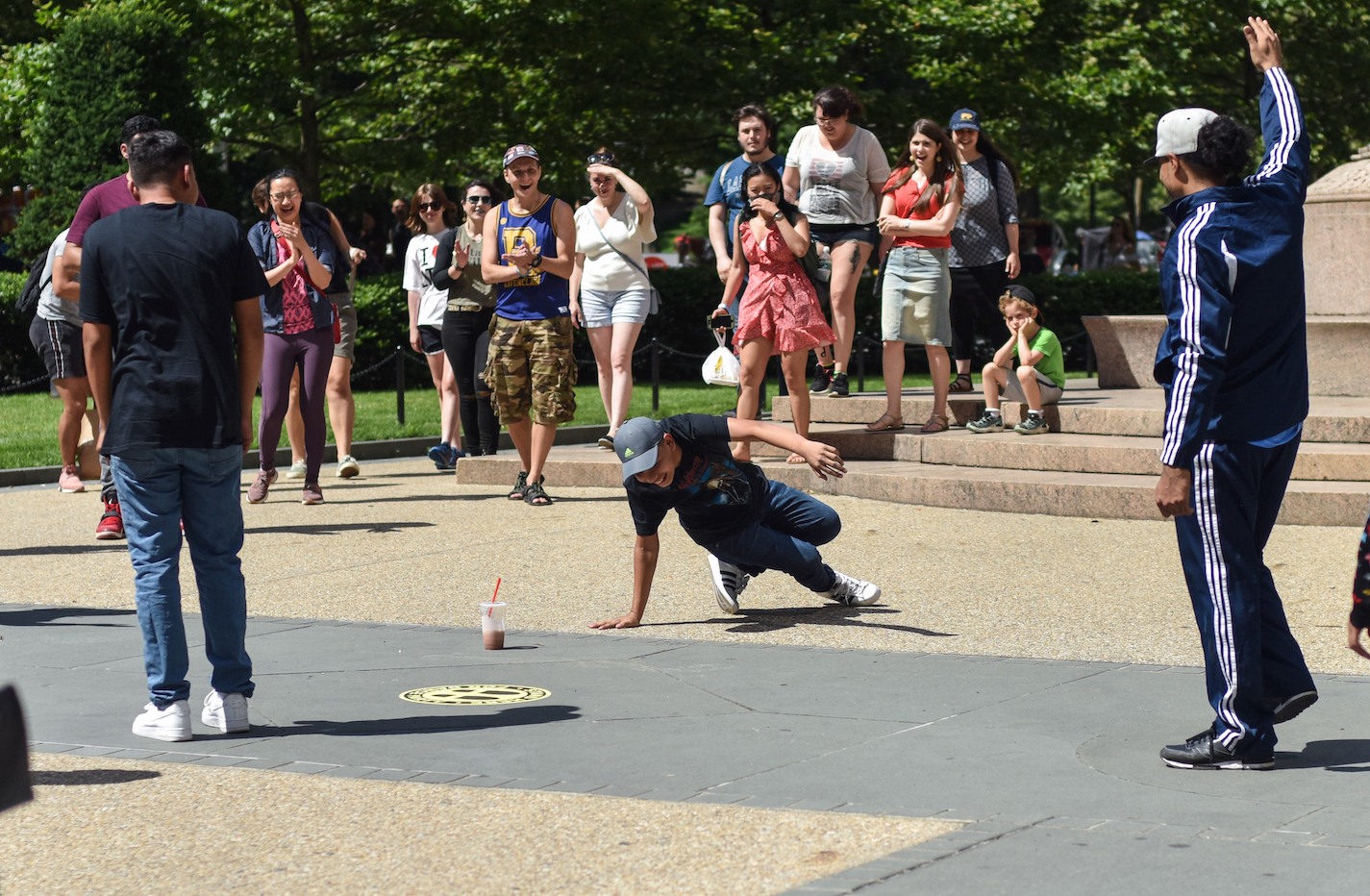 To the surprise and delight of all, he turned out to have some hidden b-boy skills! 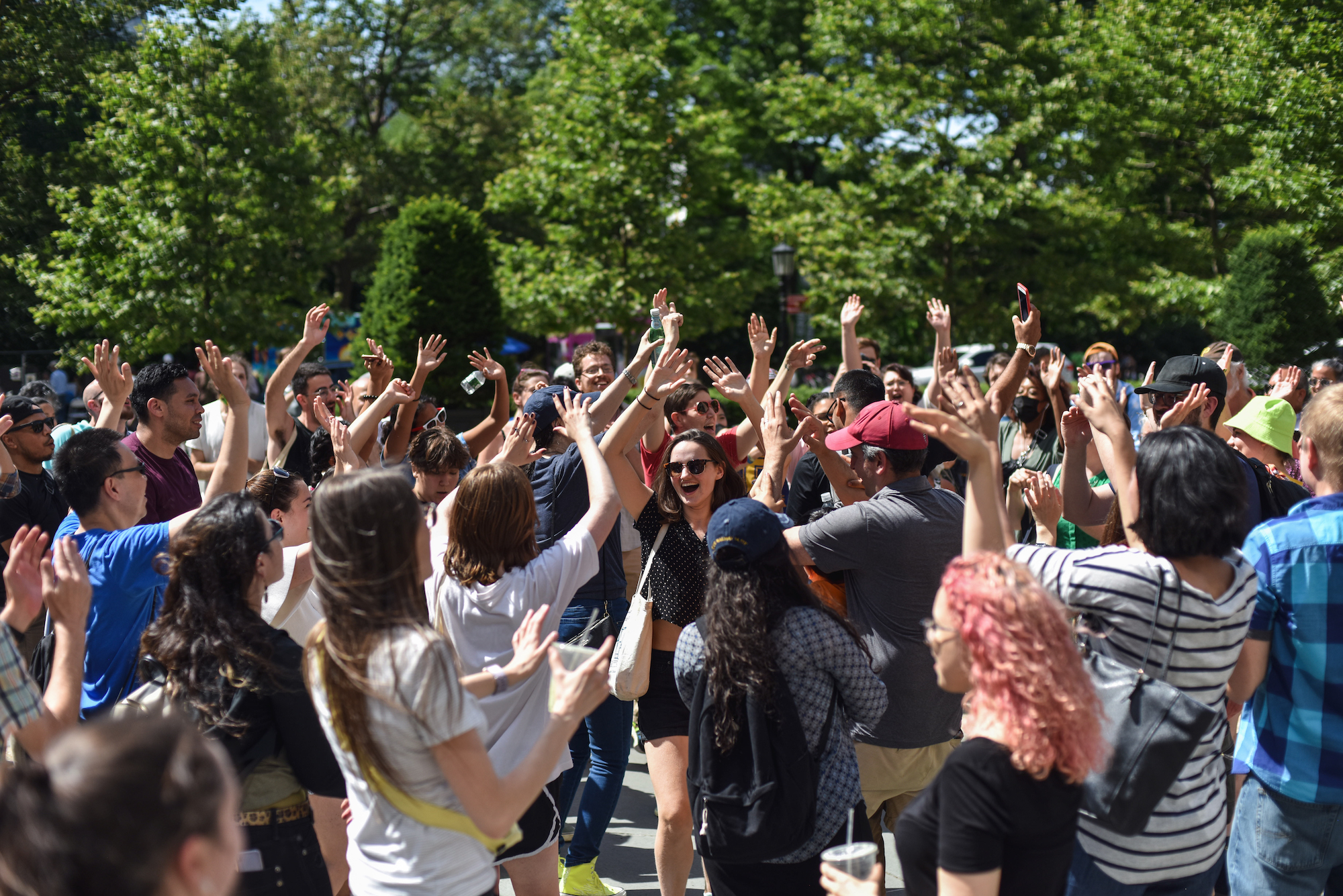 It felt wonderful to be in a happy crowd of people again. Everyone involved and everyone who joined in had such positive energy, and it made for an incredibly fun day.

When the music faded out, everyone walked their separate ways and blended back into the streetscape, leaving those who witnessed it wondering what the hell just happened. 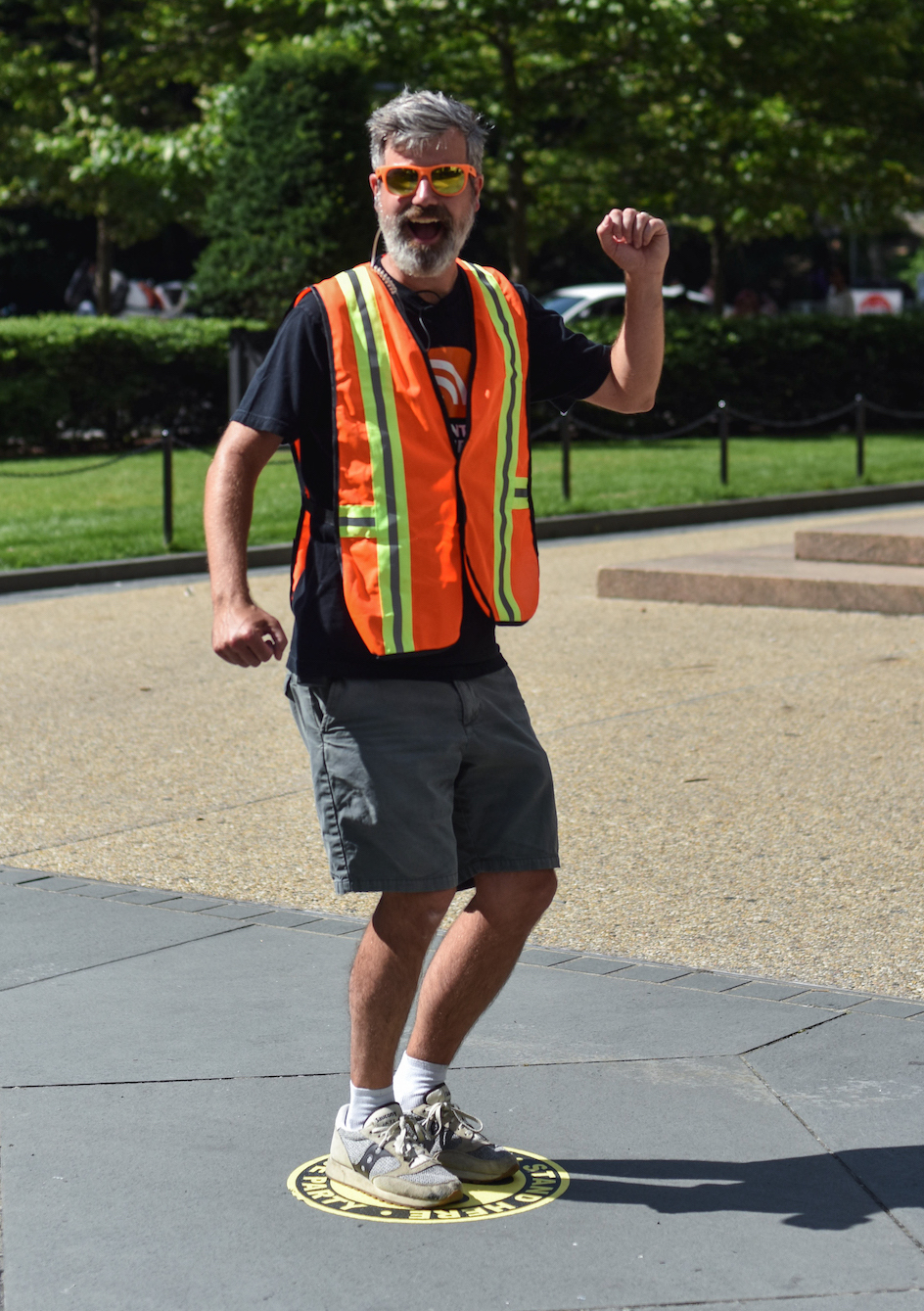 Thanks to everyone who came out to participate, thanks to the Dynamic Rockers, and thanks to the Museum of the City of New York for their collaboration on this project.