For our latest mission, we created New York’s most socially distanced office in the middle of the East River. The floating office included a water cooler, a battery-powered computer with working internet, and a variety of contemporary office furniture. Workers were transported to the office by a shuttle boat at Brooklyn’s Main Street Park.

The workspace included breathtaking views of the Manhattan Bridge, Brooklyn Bridge, and the Manhattan skyline, providing the ultimate Zoom background. New Yorkers on land and sea were surprised and delighted by the sight of this extreme work from home measure. This unauthorized project was a collaboration with Tideland Institute 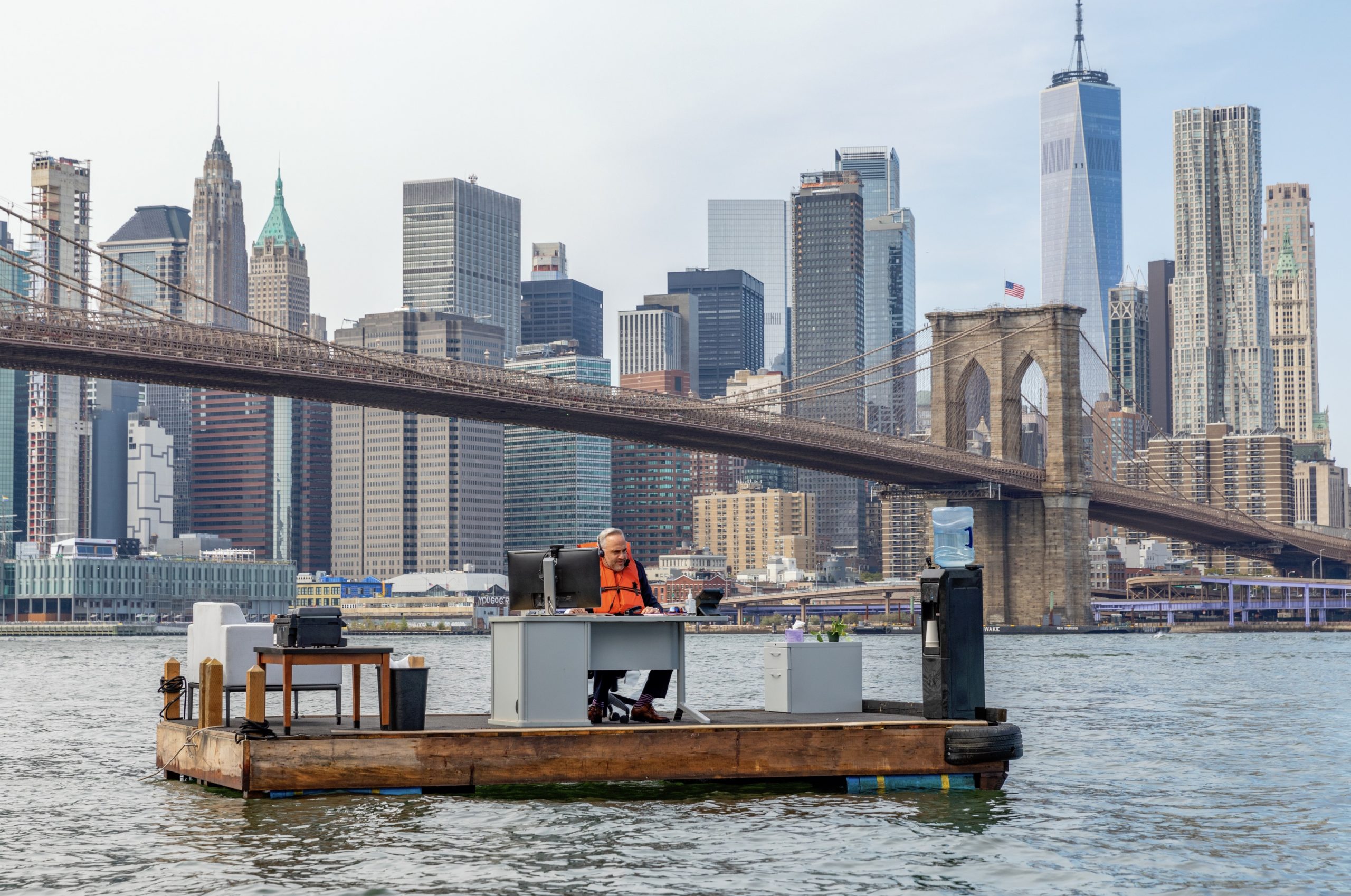 This project was inspired by conversations we had with our friends at Tideland Institute, whose mission is to promote culture on New York’s water. In thinking about things we could do that would be COVID-19 safe, we got excited about the idea of creating something in the middle of the river. With everyone working from home in cramped apartments, we thought a socially distanced office would be the perfect thing. 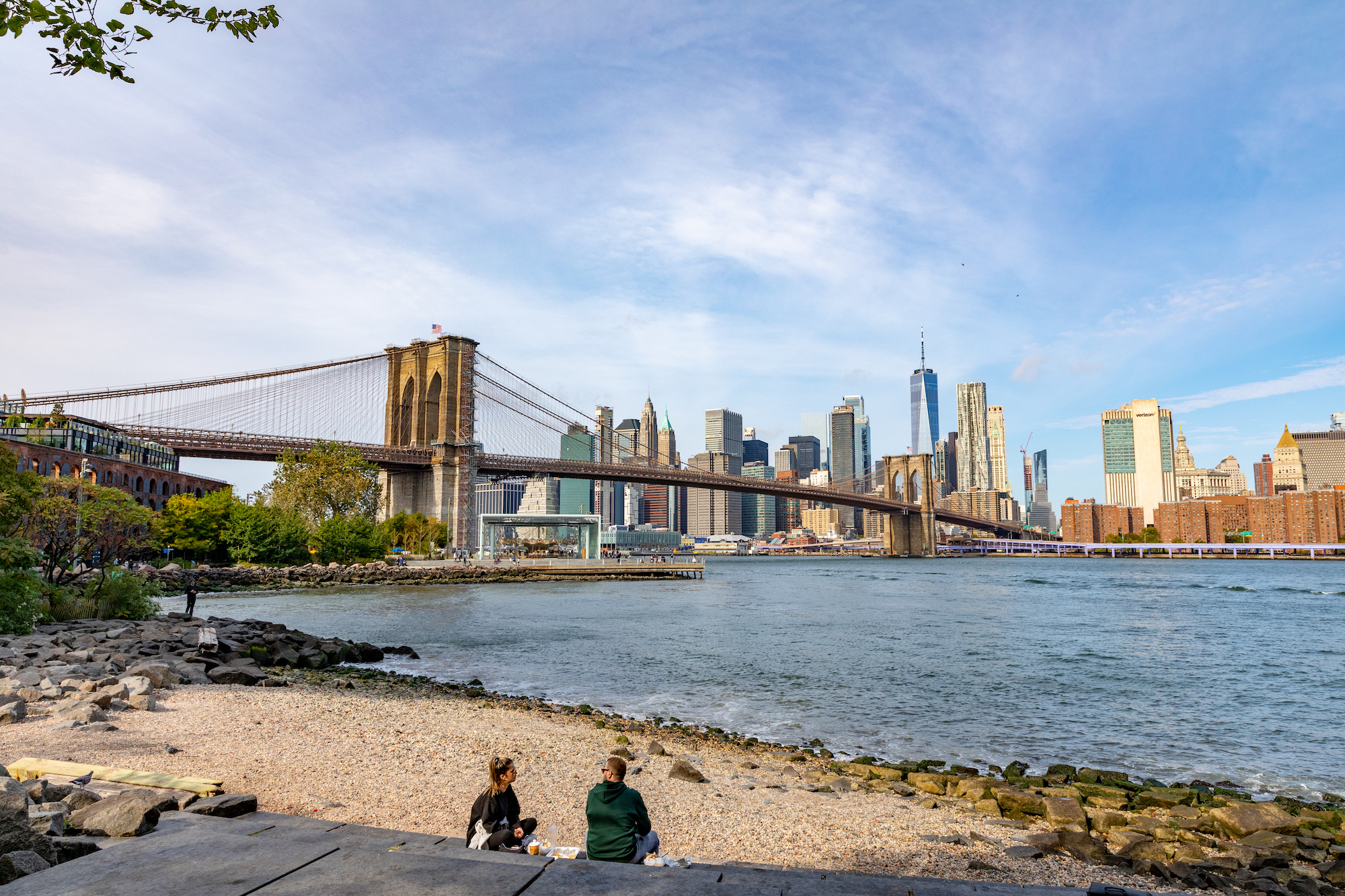 For our location we chose Pebble Beach, a small beach in Brooklyn’s Main Street Park in DUMBO. The area has gorgeous views of the bridges and the Manhattan skyline, so it’s always busy. 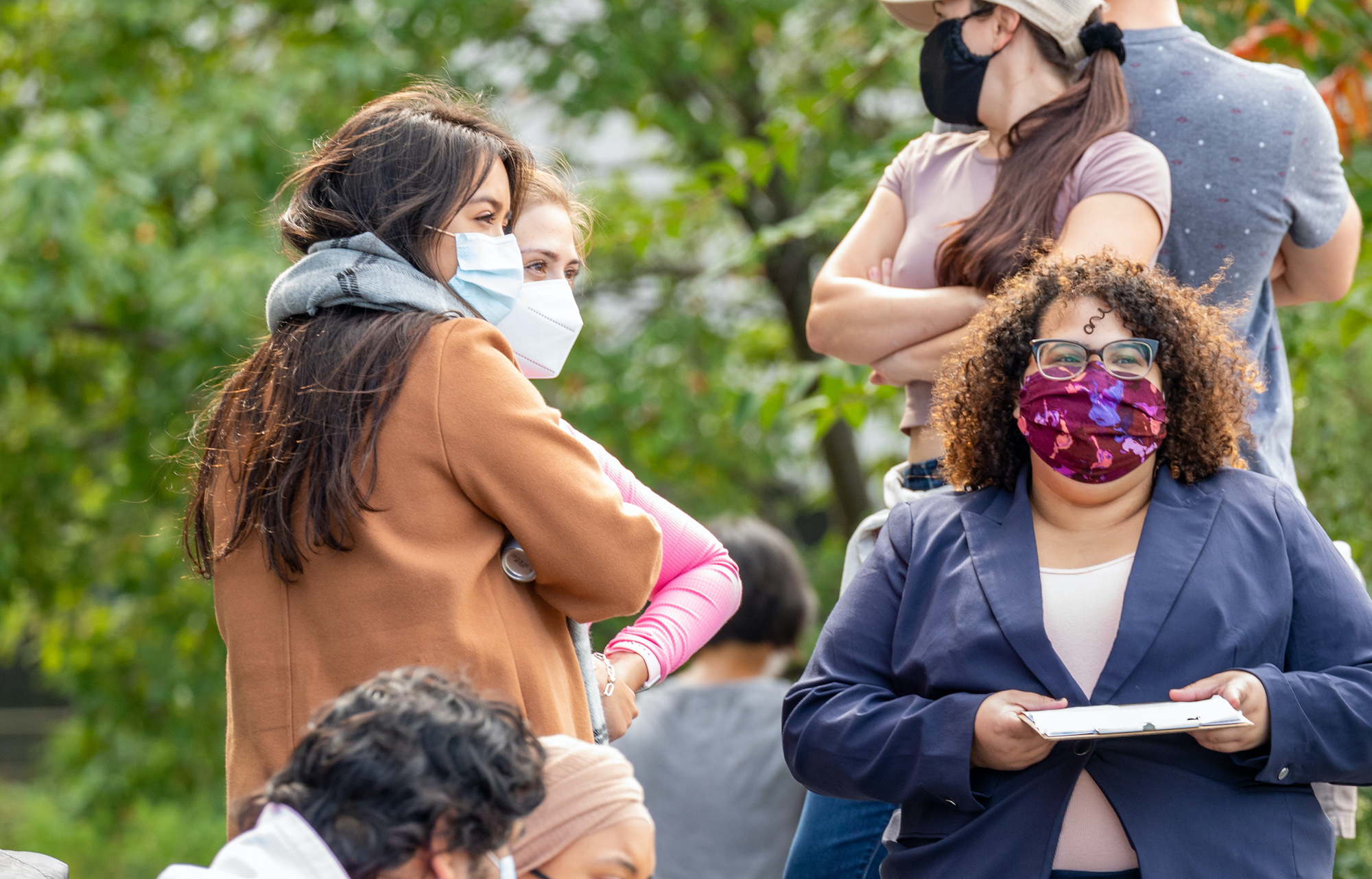 For those on land who asked about the project, we pretended that it was a Department of Buildings pilot program. Agent Glo Tavarez posed as a DOB employee asking people for feedback on the program. She claimed the DOB was building 4,000 of these offices on the East River in the spring, with an additional 6,000 to follow on the Hudson River by summer. 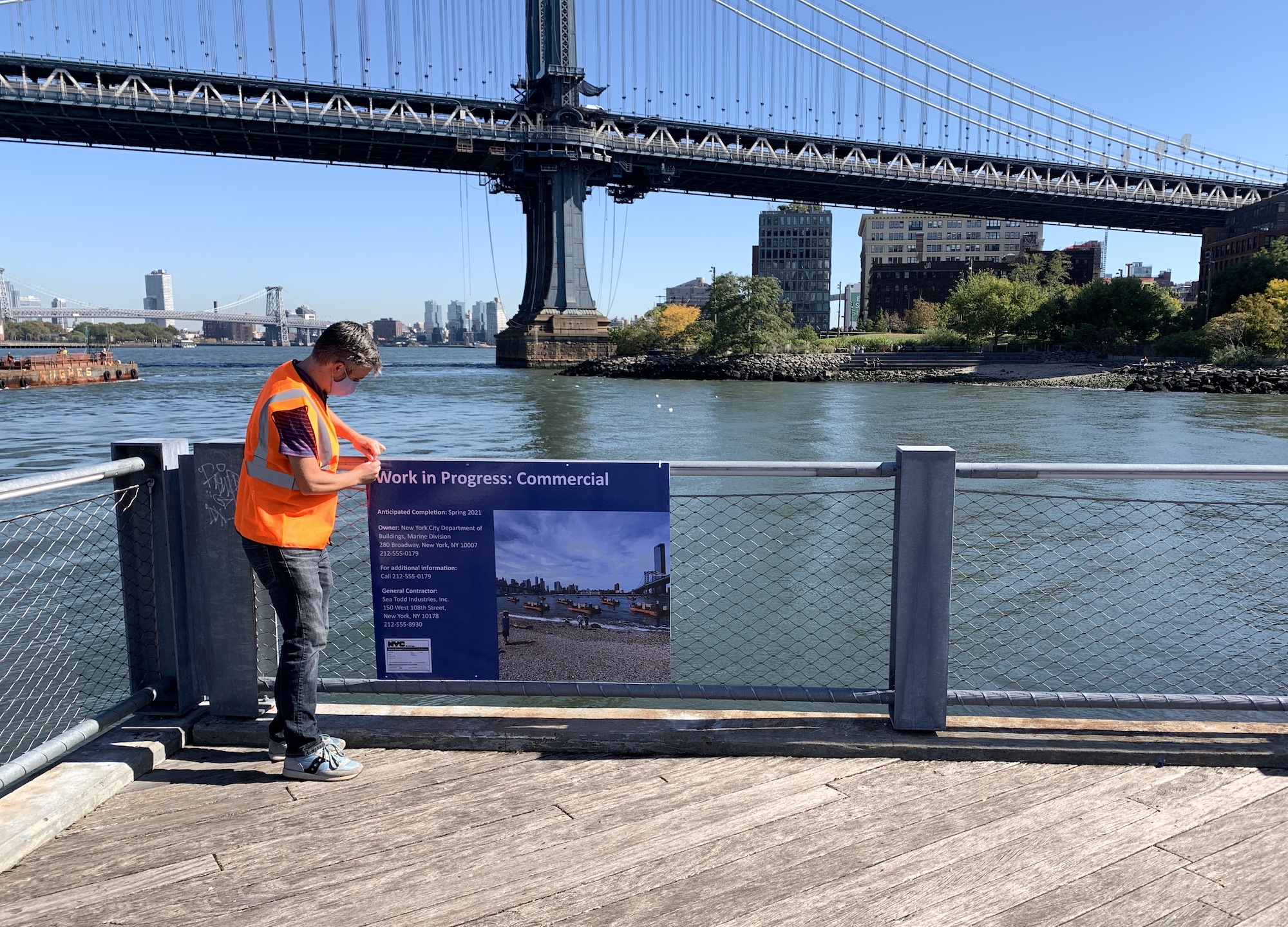 We (temporarily) installed a DOB construction sign as well, and let people take a look at a rendering of what it will look like. 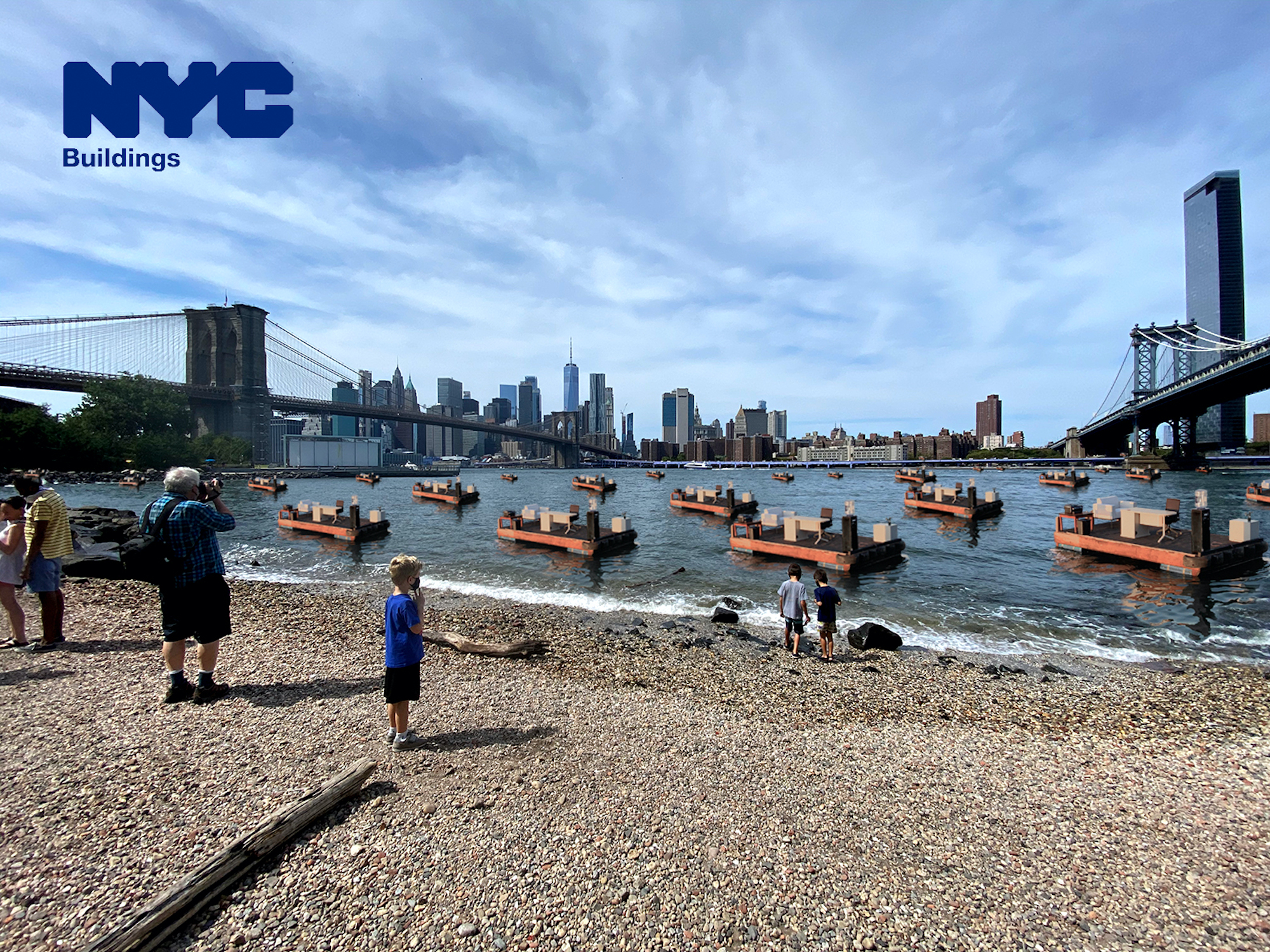 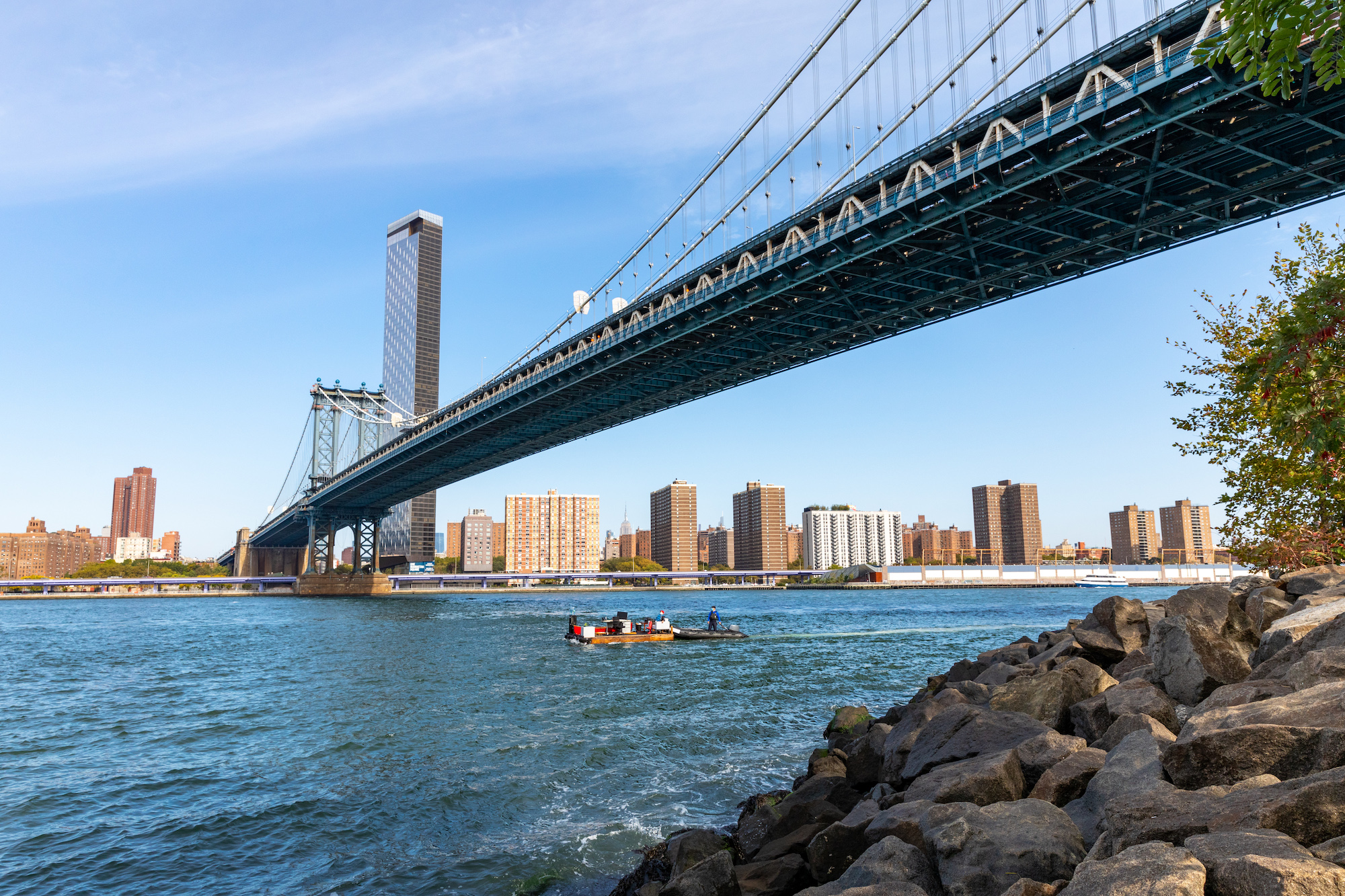 The office was built at Tideland’s home base in Newtown Creek in Queens and brought to DUMBO via the East River with a Zodiac boat. 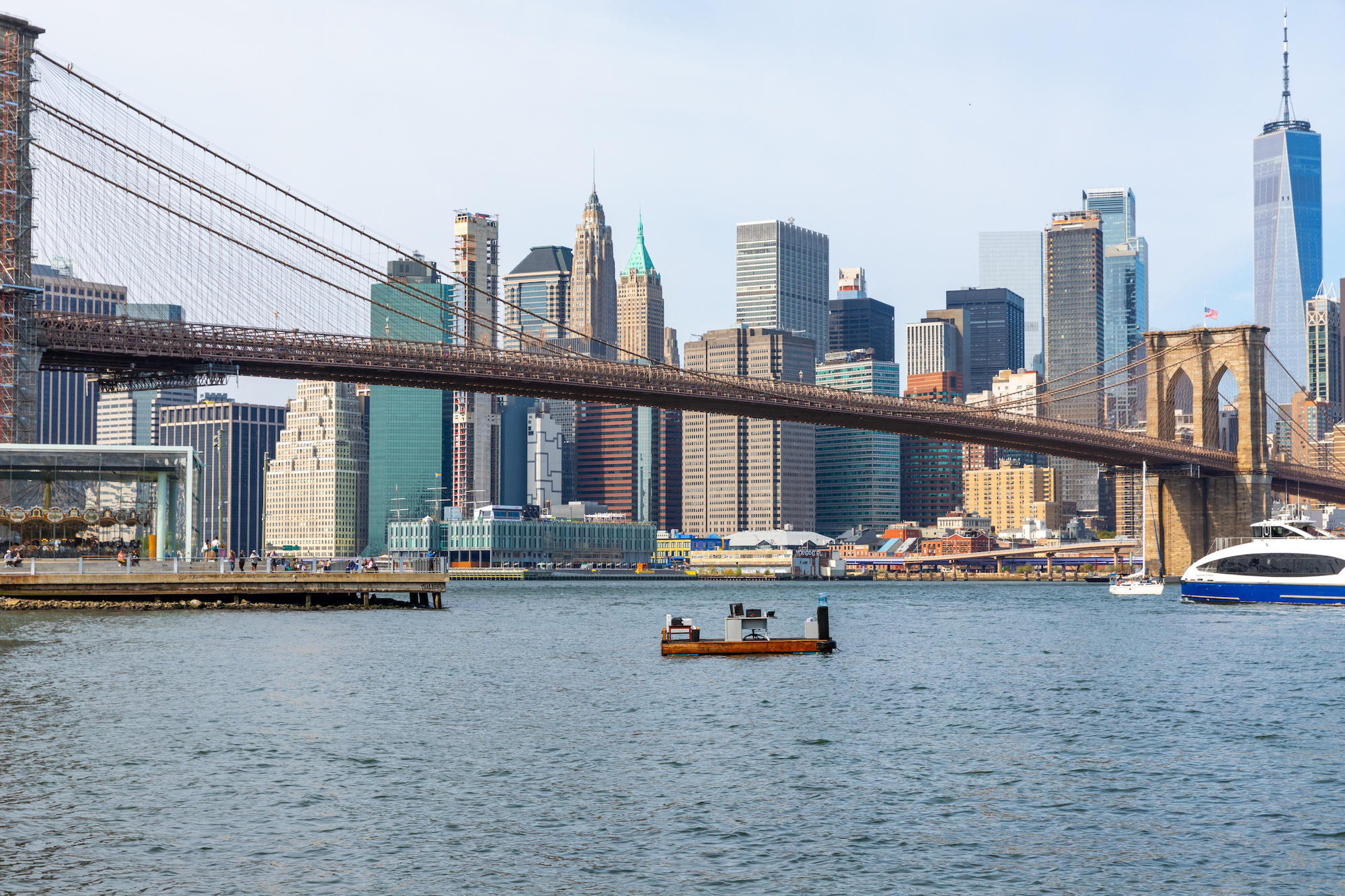 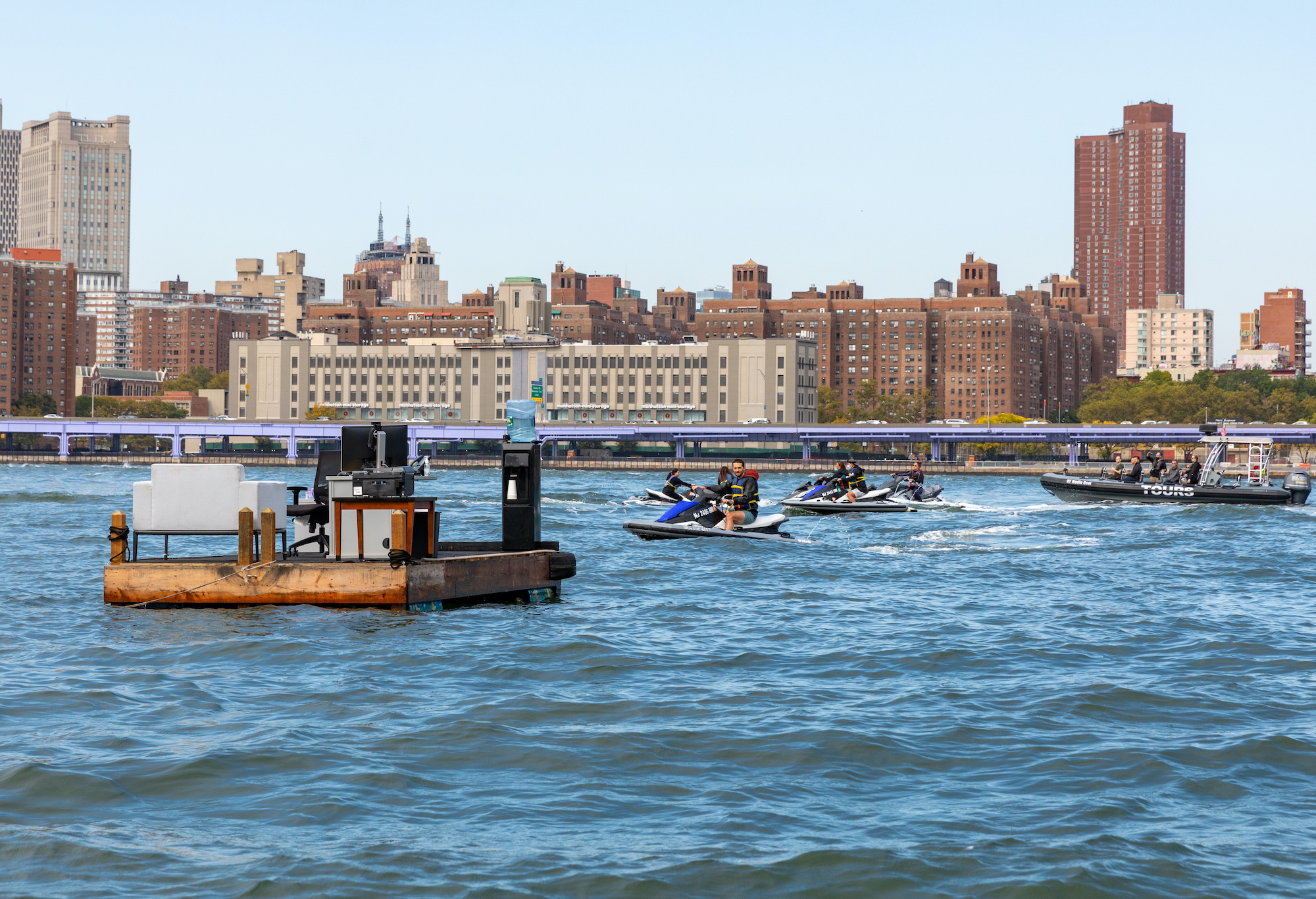 It was immediately a hit with jet skiers. 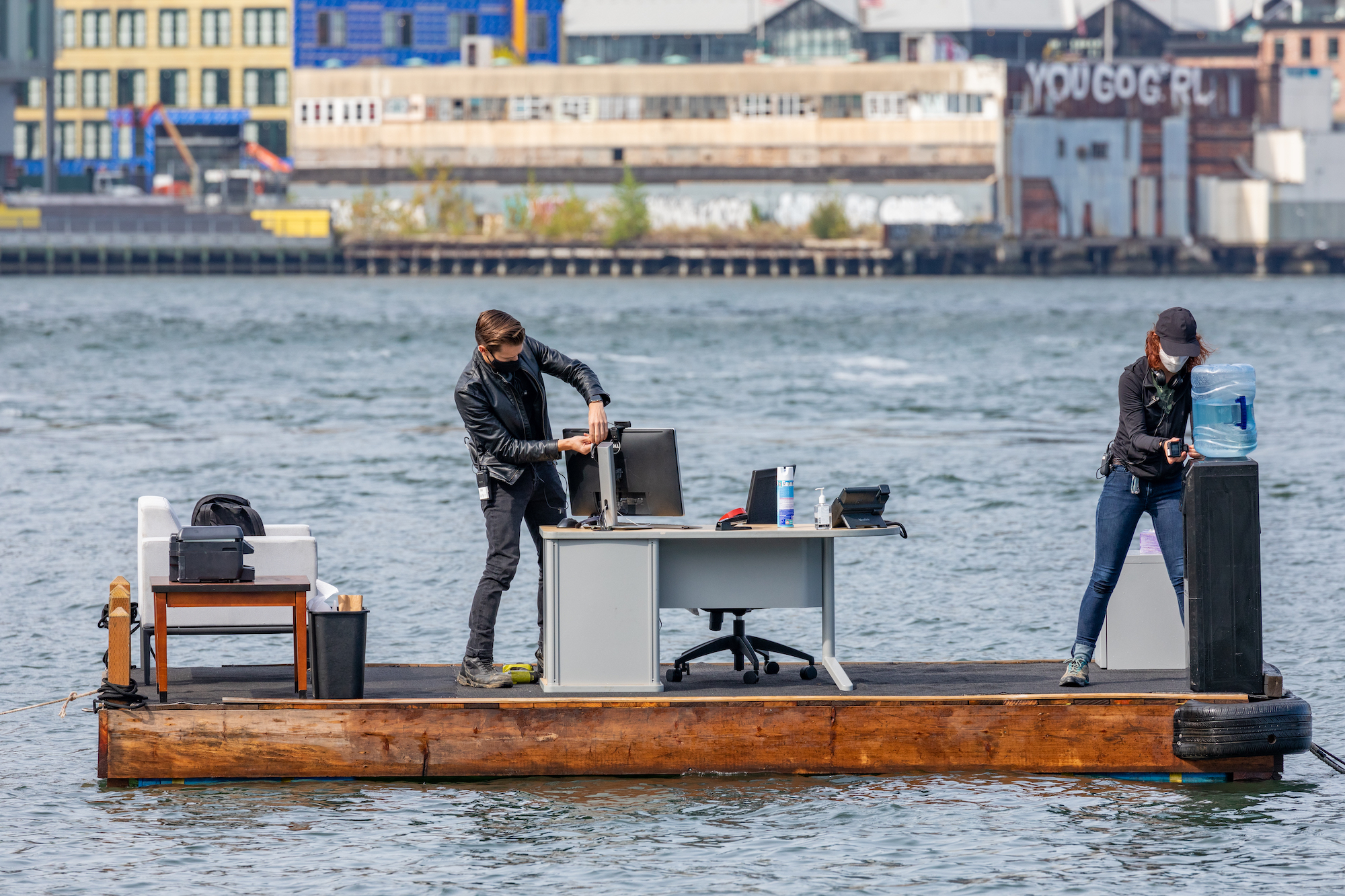 Agents Justin Ayers and Kate Montgomery from our production team visited the raft first to set up all of our tech. They installed hidden cameras and got the computer up and running. 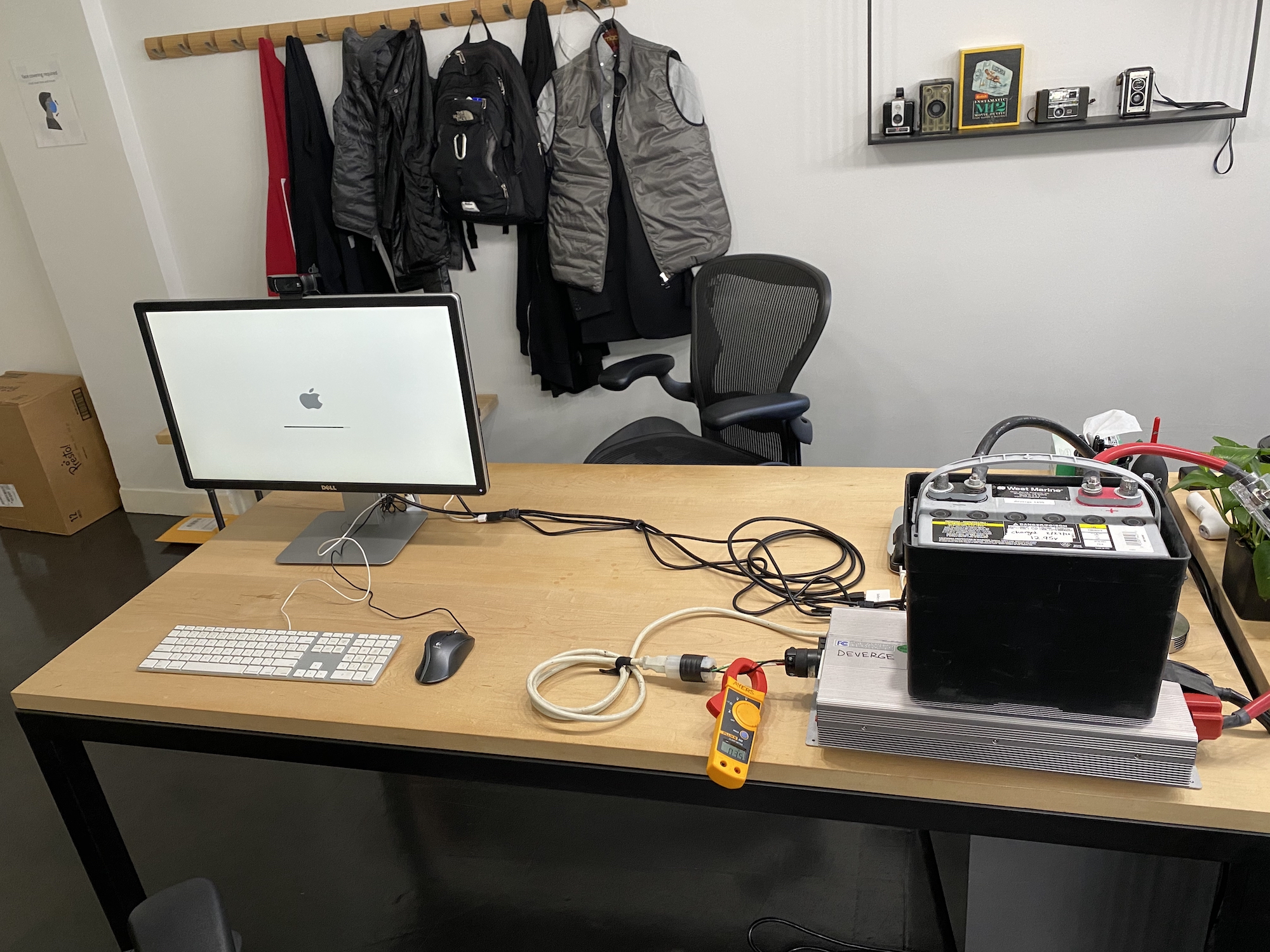 Agent Justin Ayers designed the rig that powered the computer. Fittingly, he used a boat battery. 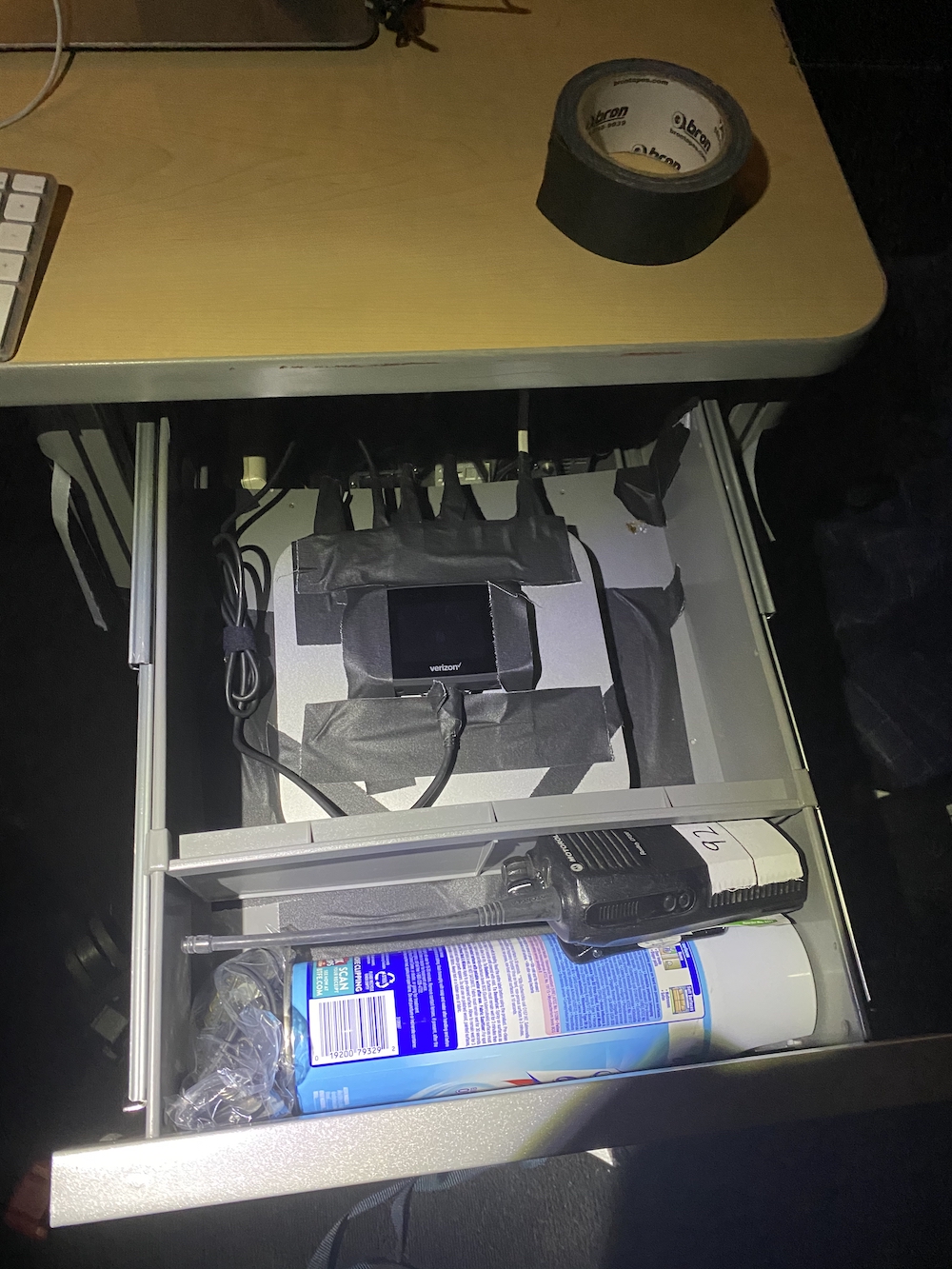 The boat battery was hidden inside the desk along with a Mac Mini and a Verizon hotspot. This allowed us to have the Zoom call. 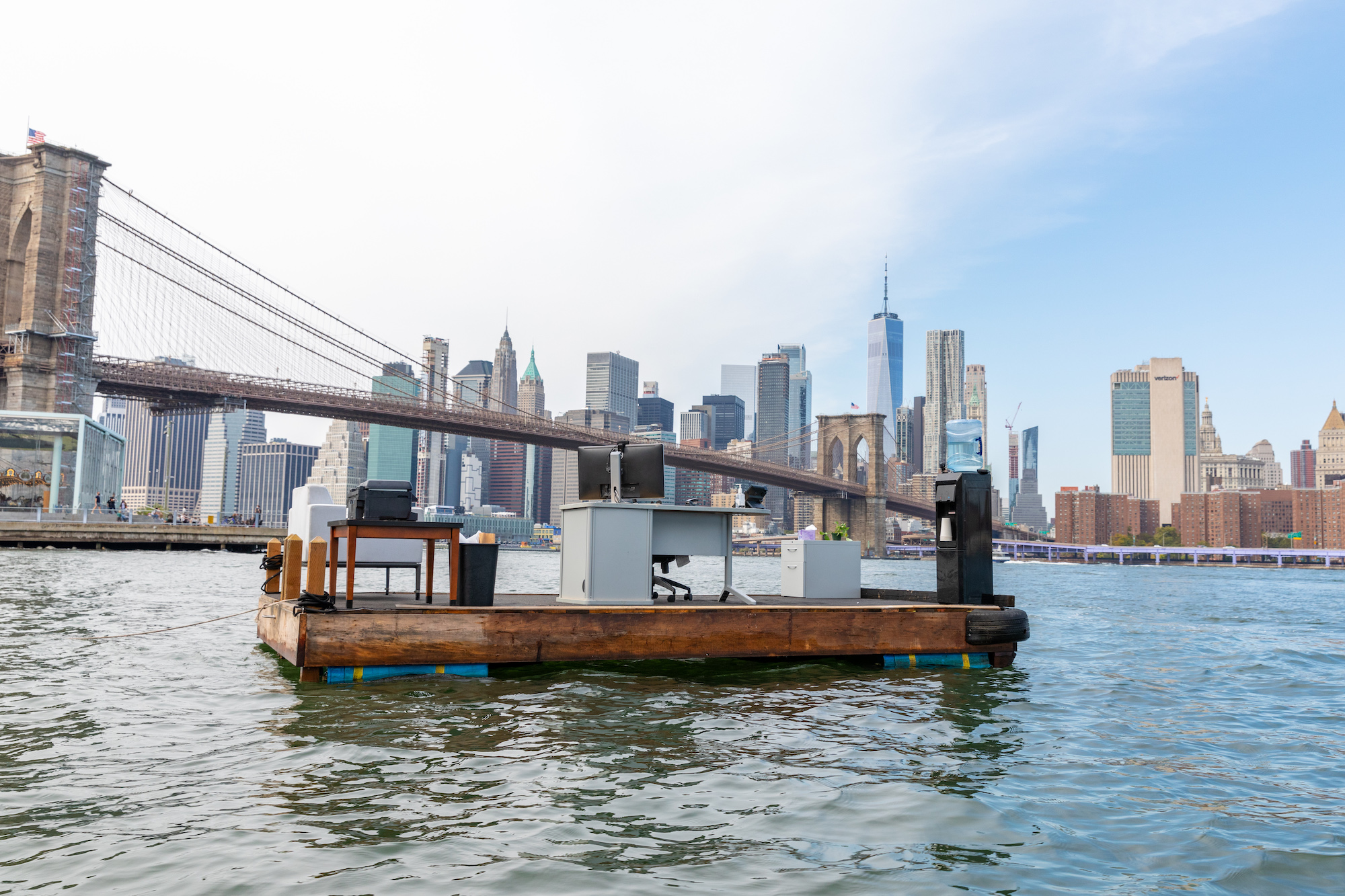 One of our oldest collaborators, Agent Jesse Good, happens to own an office furniture business in New Jersey, and he was able to hook us up with some free office furniture. We wanted it to have the vibe of “government program” so we picked out some stuff that was pretty generic looking. Sadly the printer was not plugged in. Since it’s 2020, the office also included hand sanitizer and Lysol. Everything was either screwed to the floor or stuck with double sided tape in case of an unexpected big wave. 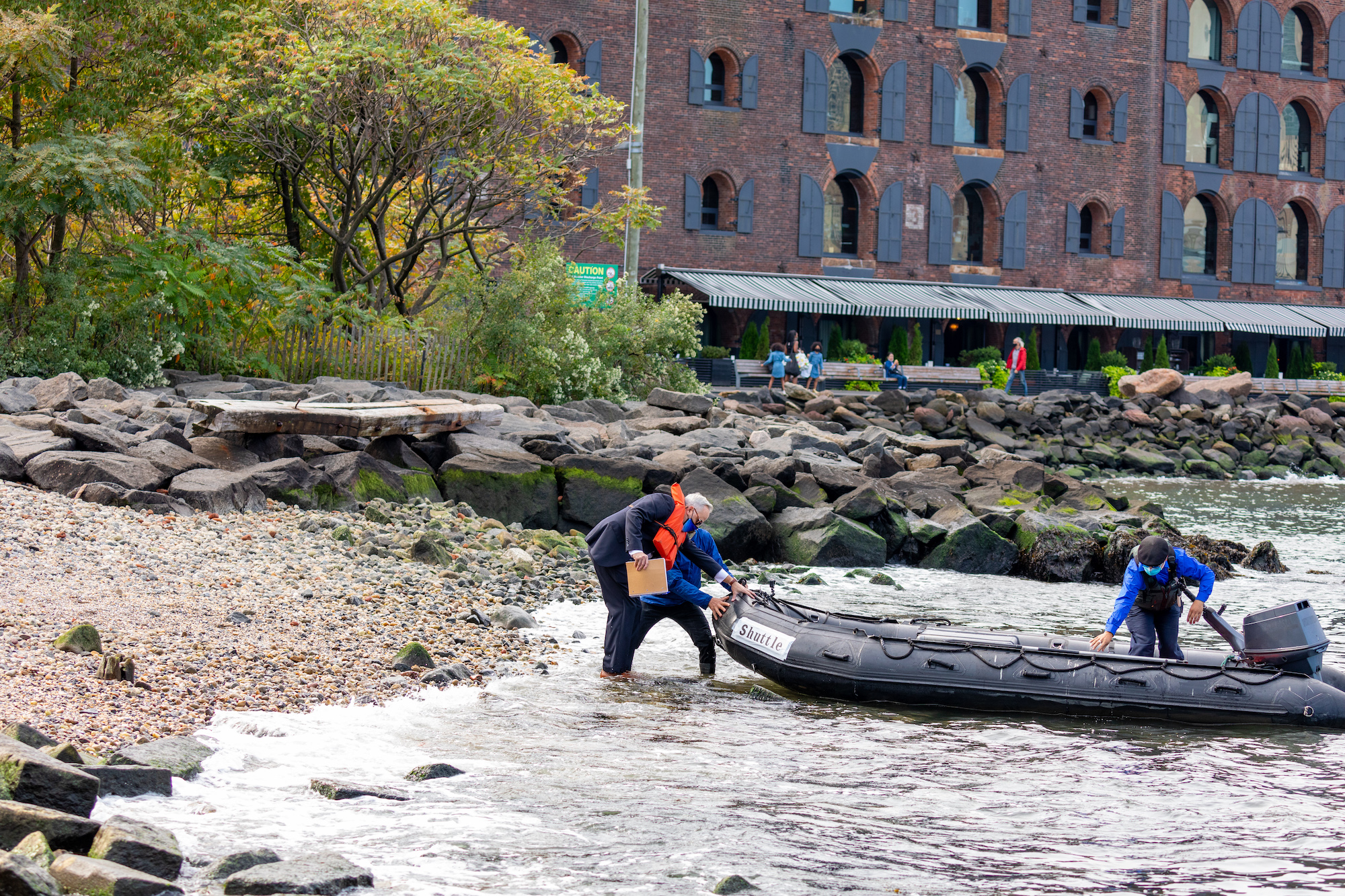 Agent N.D. Austin served as the captain of the “shuttle boat” and he picked up our office worker, the aforementioned Agent Jesse Good, from the shore at Pebble Beach. 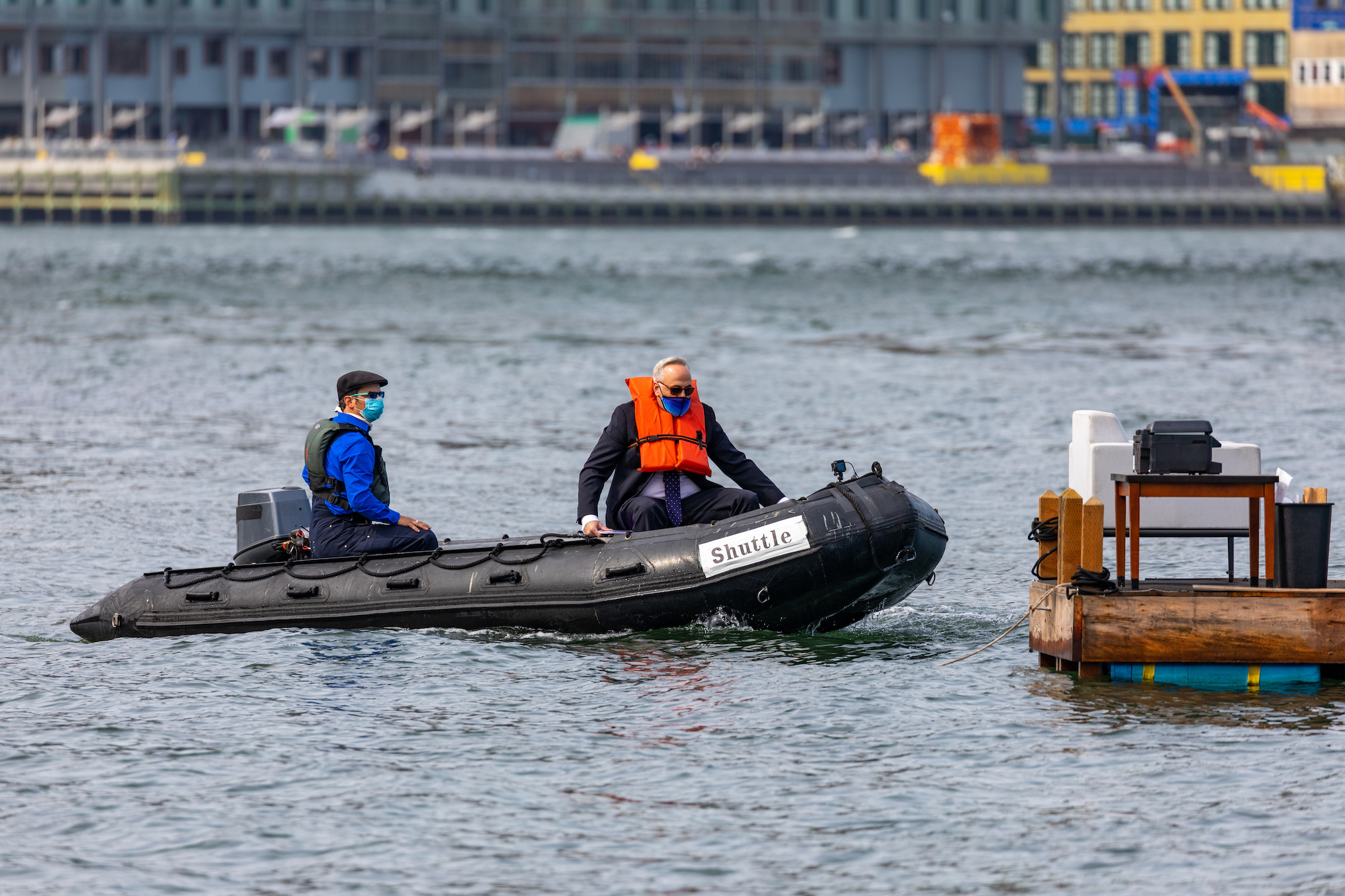 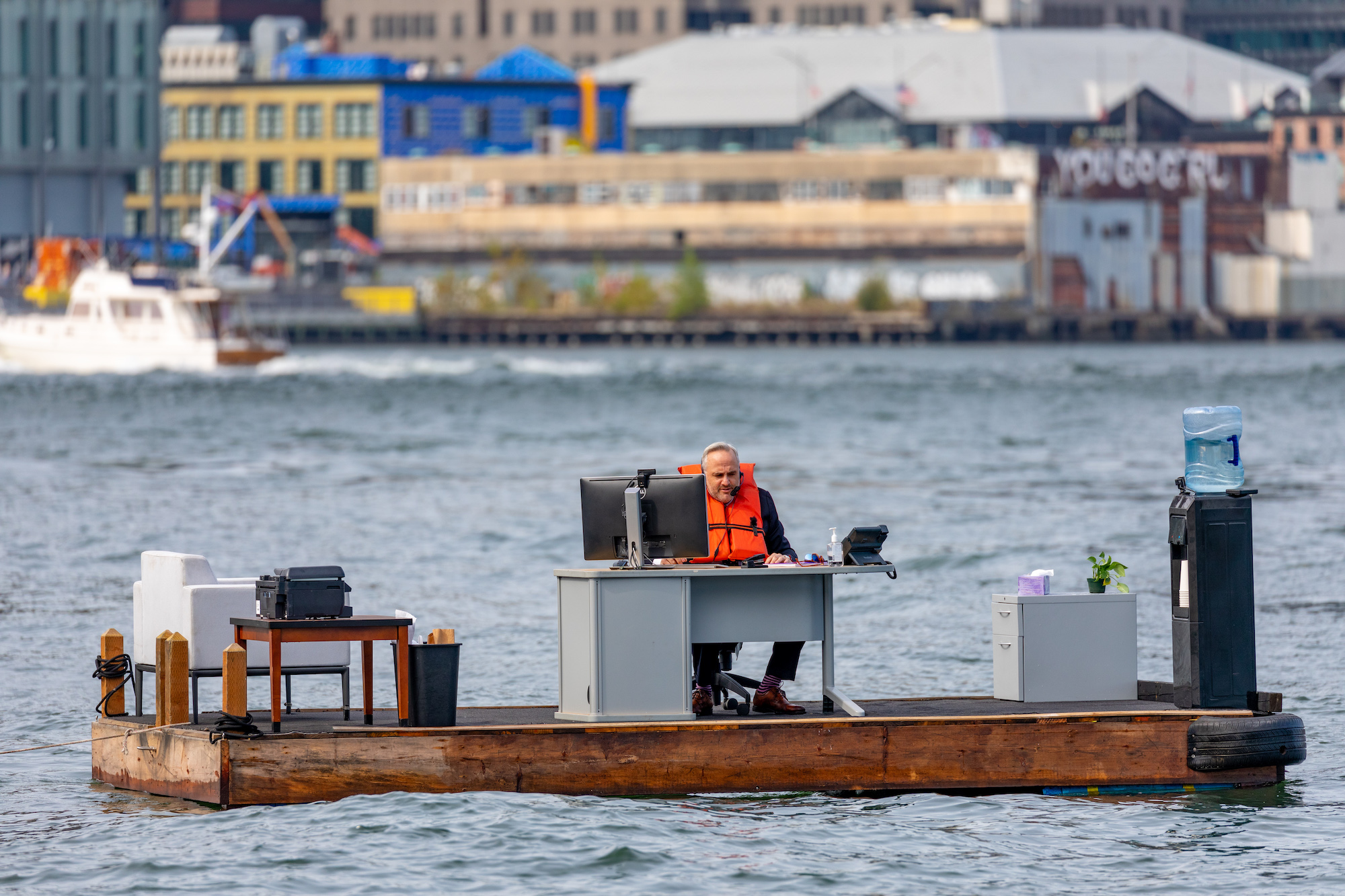 Jesse sat down and immediately hopped on an actual live Zoom call. The call featured about a dozen Improv Everywhere performers improvising as if they worked together. You can see the zoom background of the floating office in the grid in the photo below. 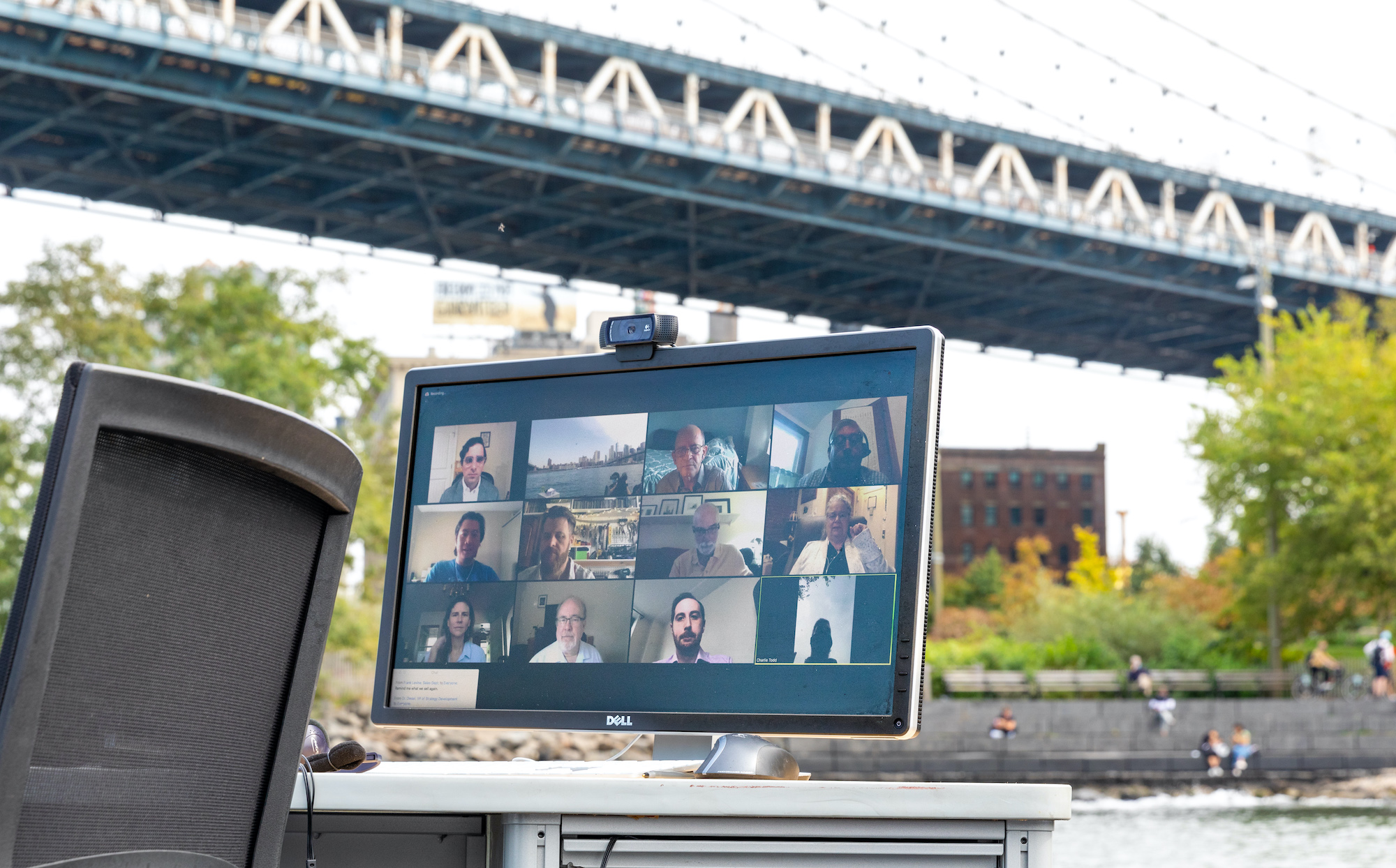 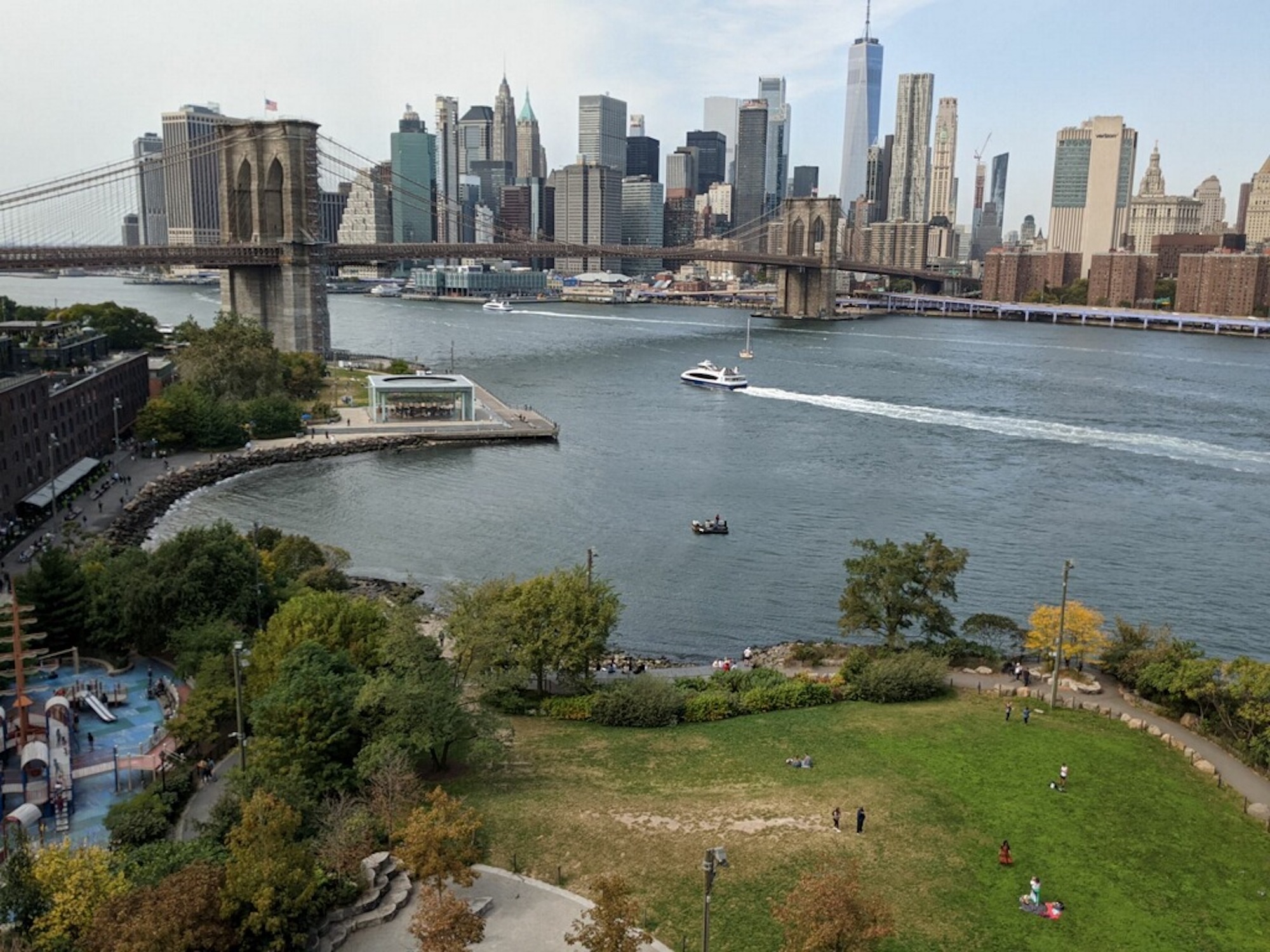 Here’s a photo a friend of ours took from the Manhattan Bridge. The office raft was situated just inside the cove, which protected it from the East River currents. The biggest concern was the waves generated by the NYC Ferry boat wakes. They were no joke! 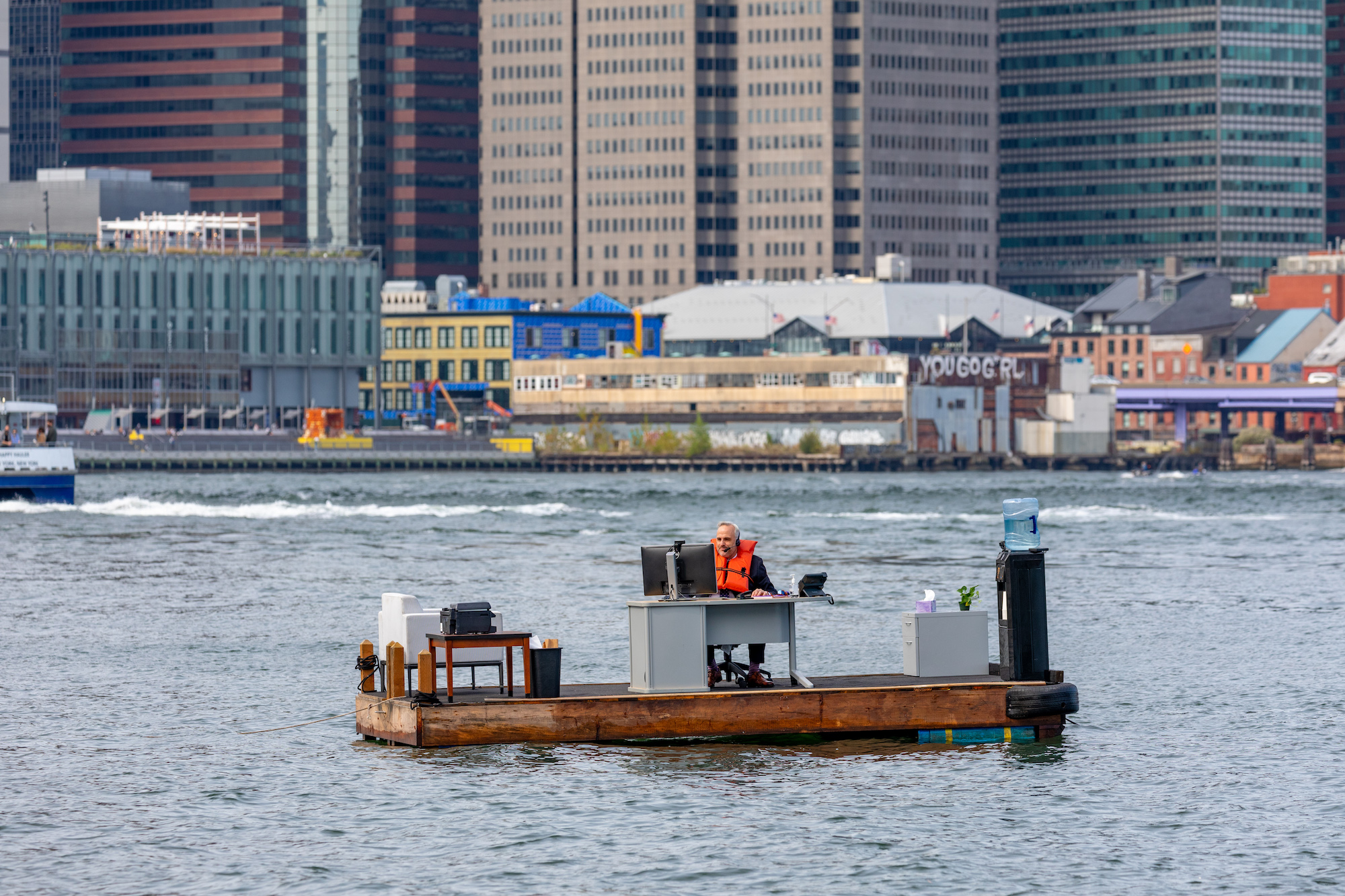 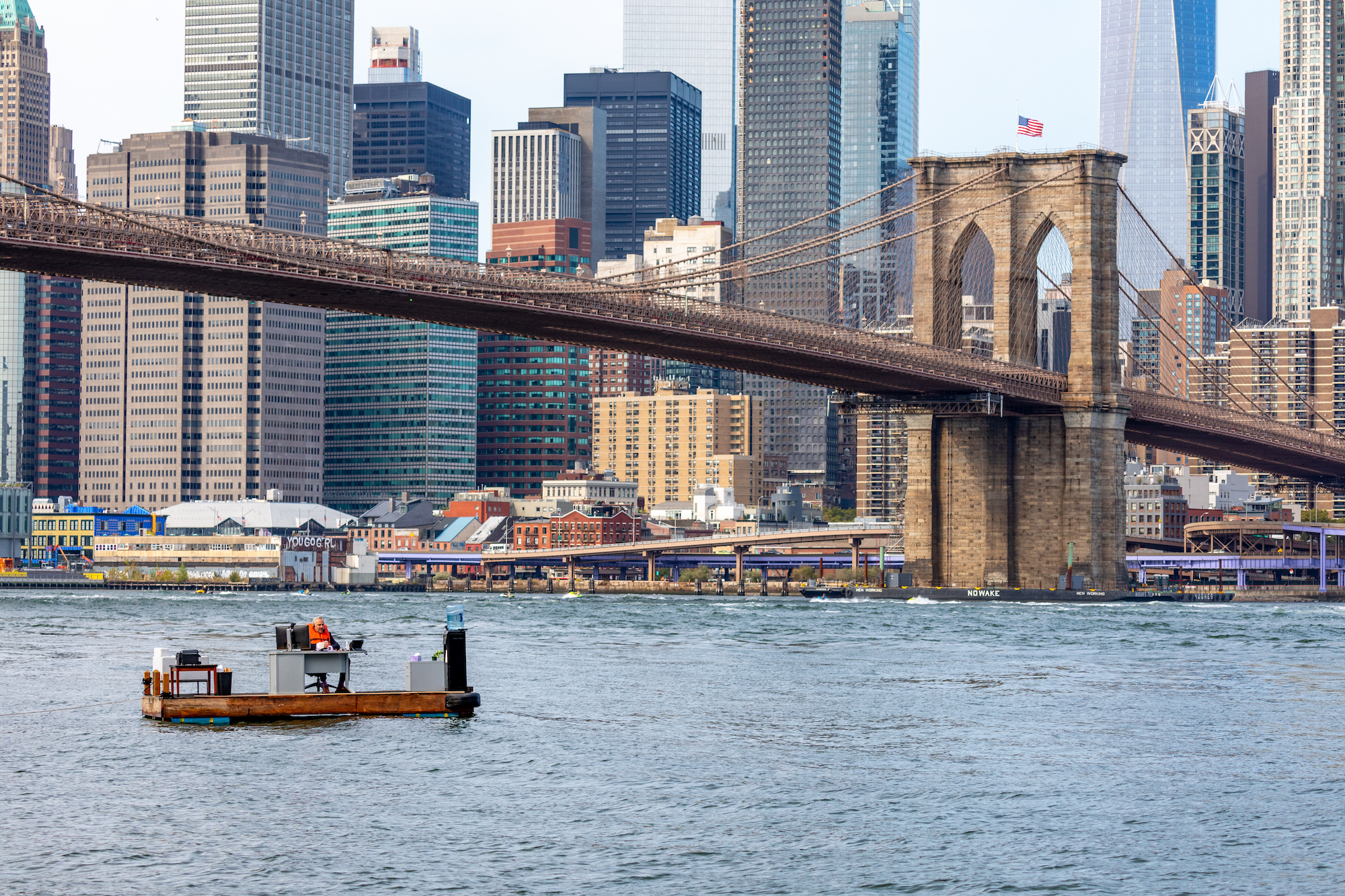 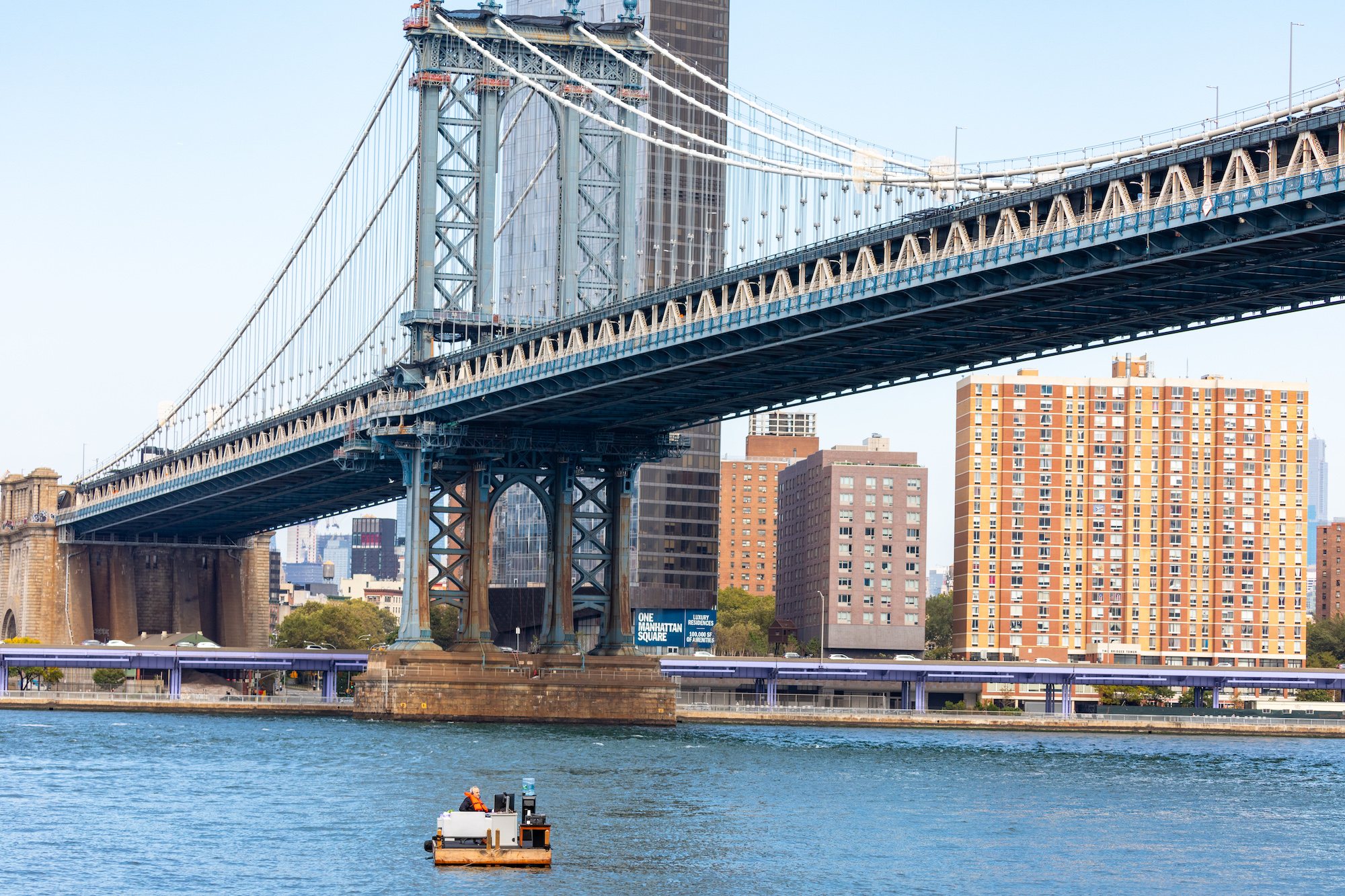 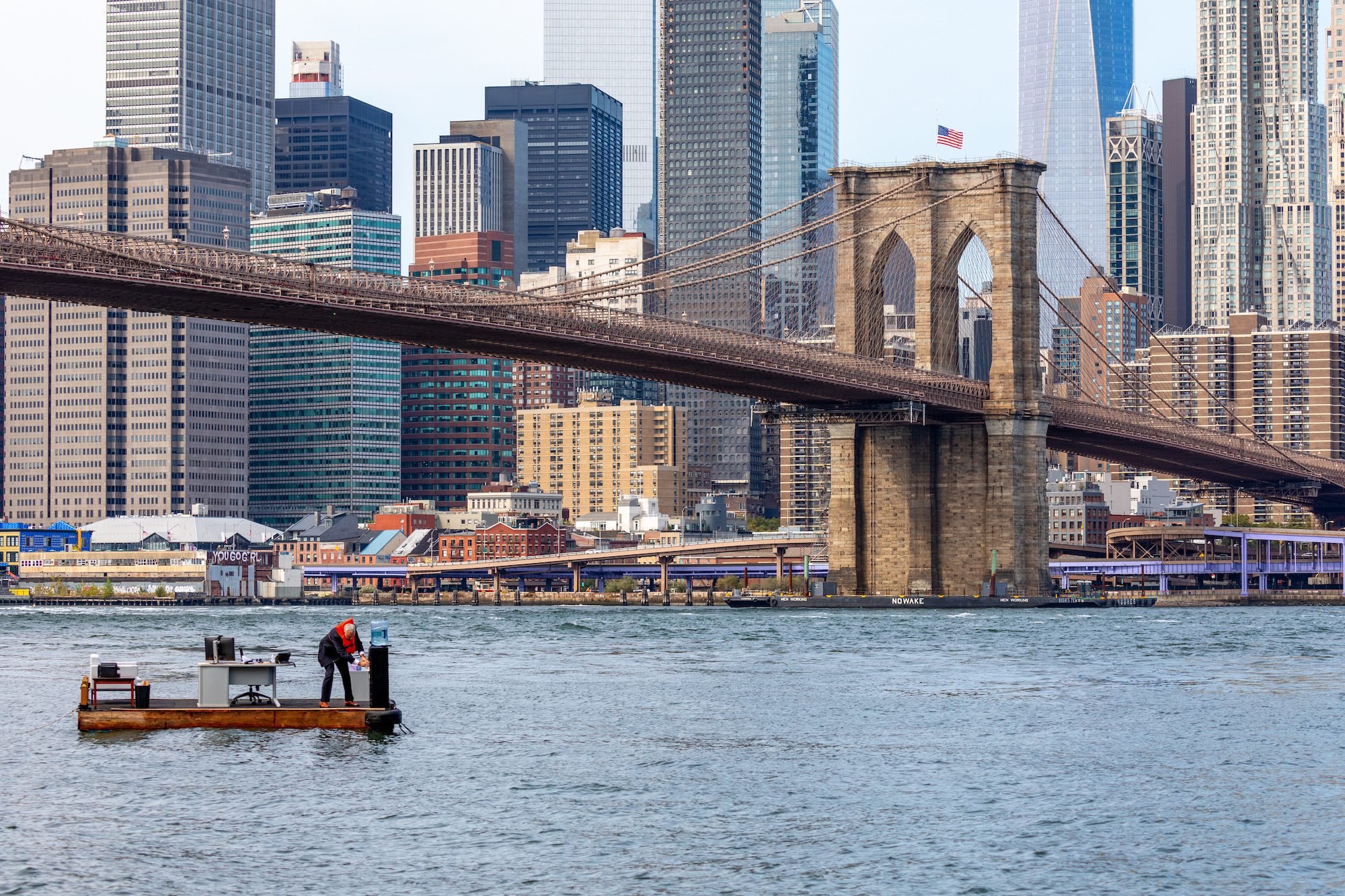 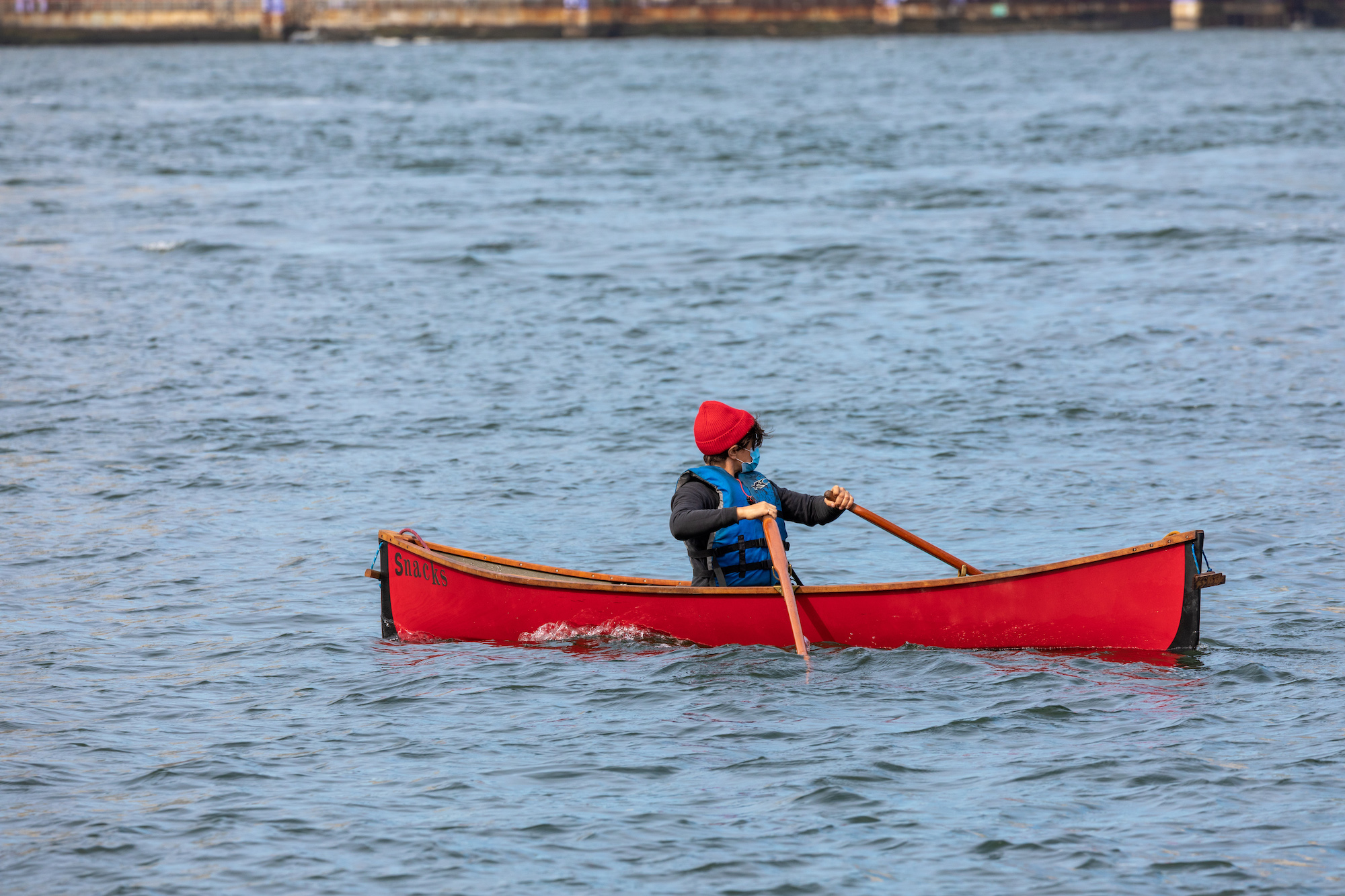 Agent Danielle Isadora Butler served as the captain of the “snack rowboat.” She paddled out to provide our office worker a selection of chips, energy bars, and tea. 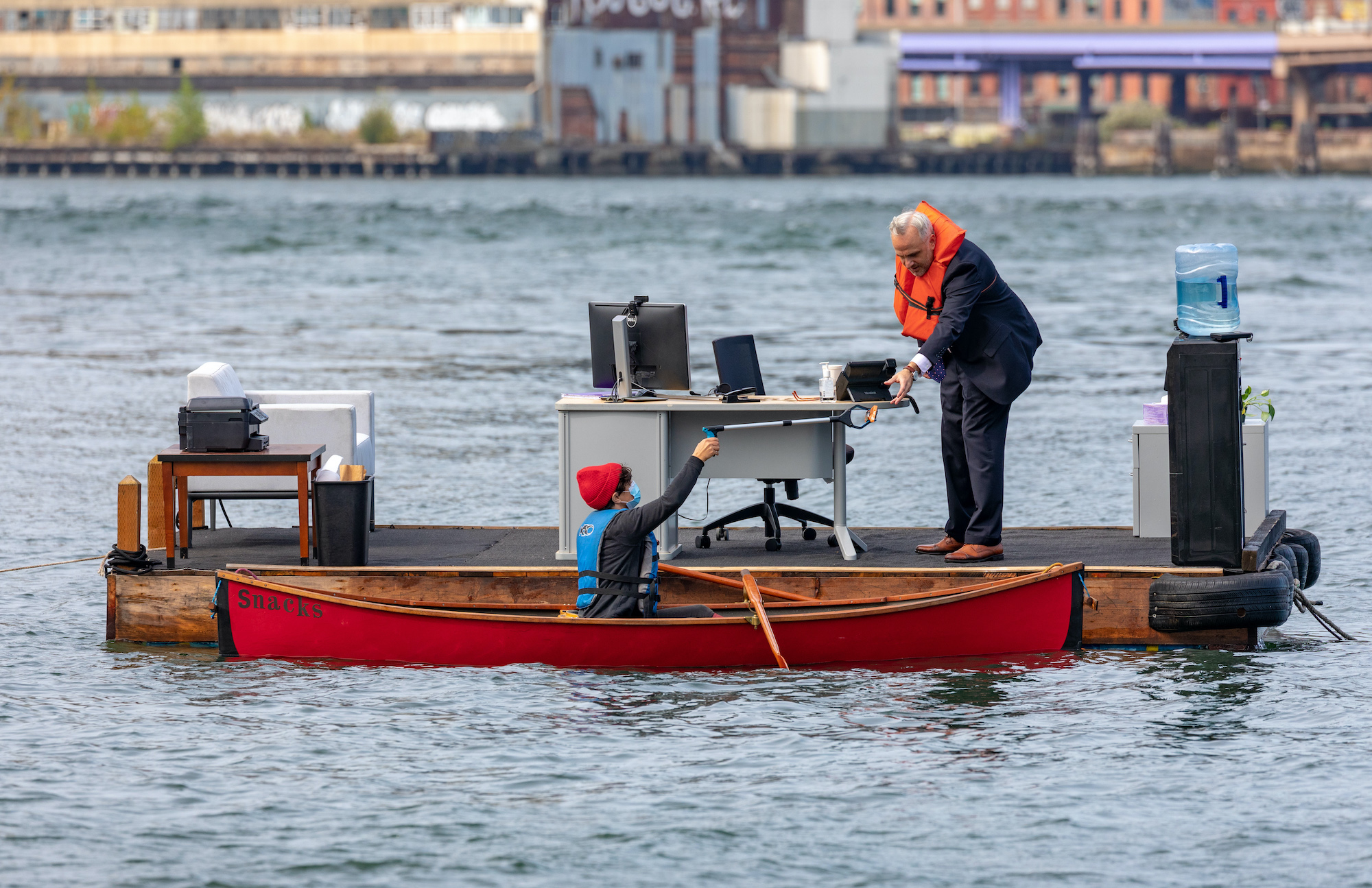 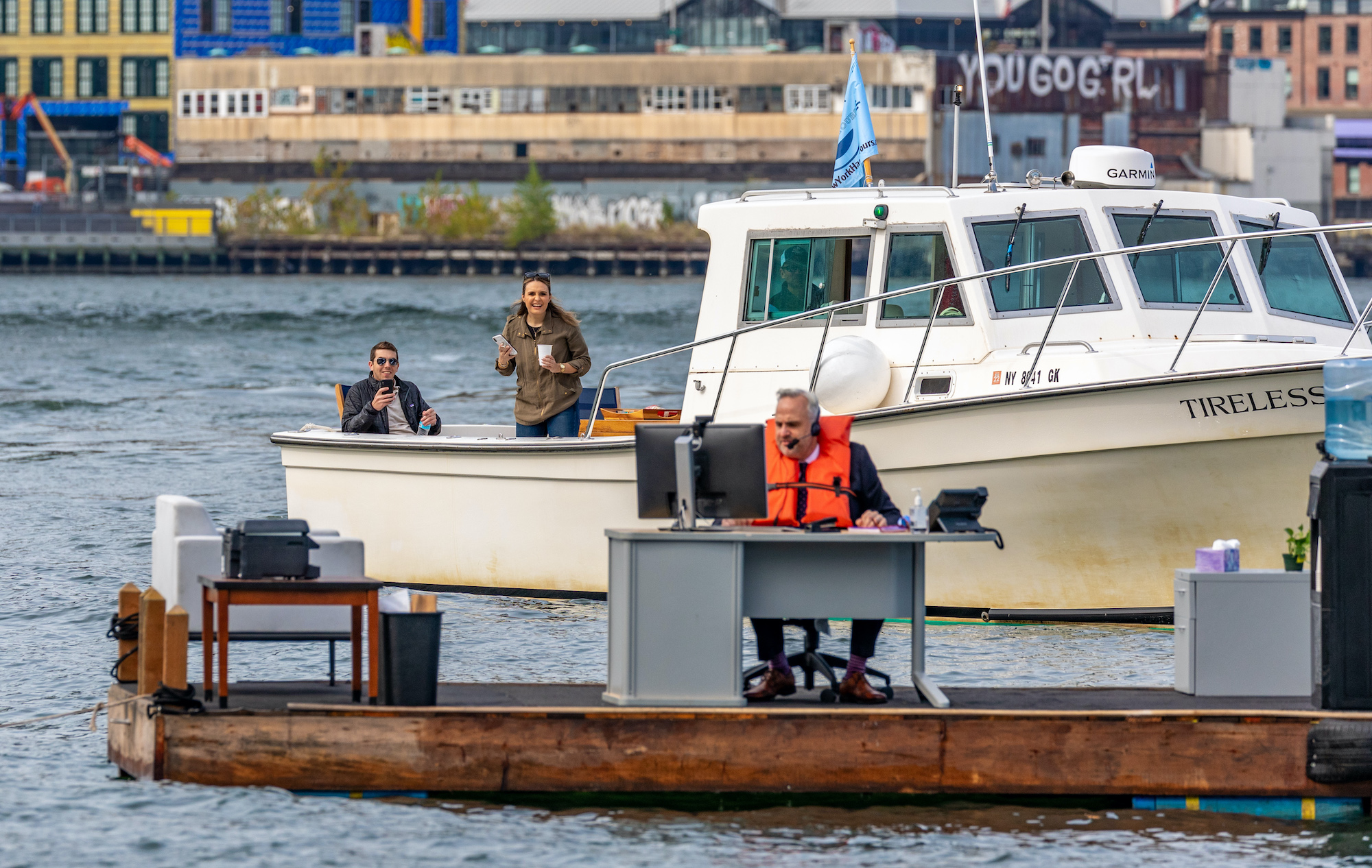 My favorite moment of the day came when a couple on a private boat tour of New York Harbor passed by the raft. Their reactions were awesome. 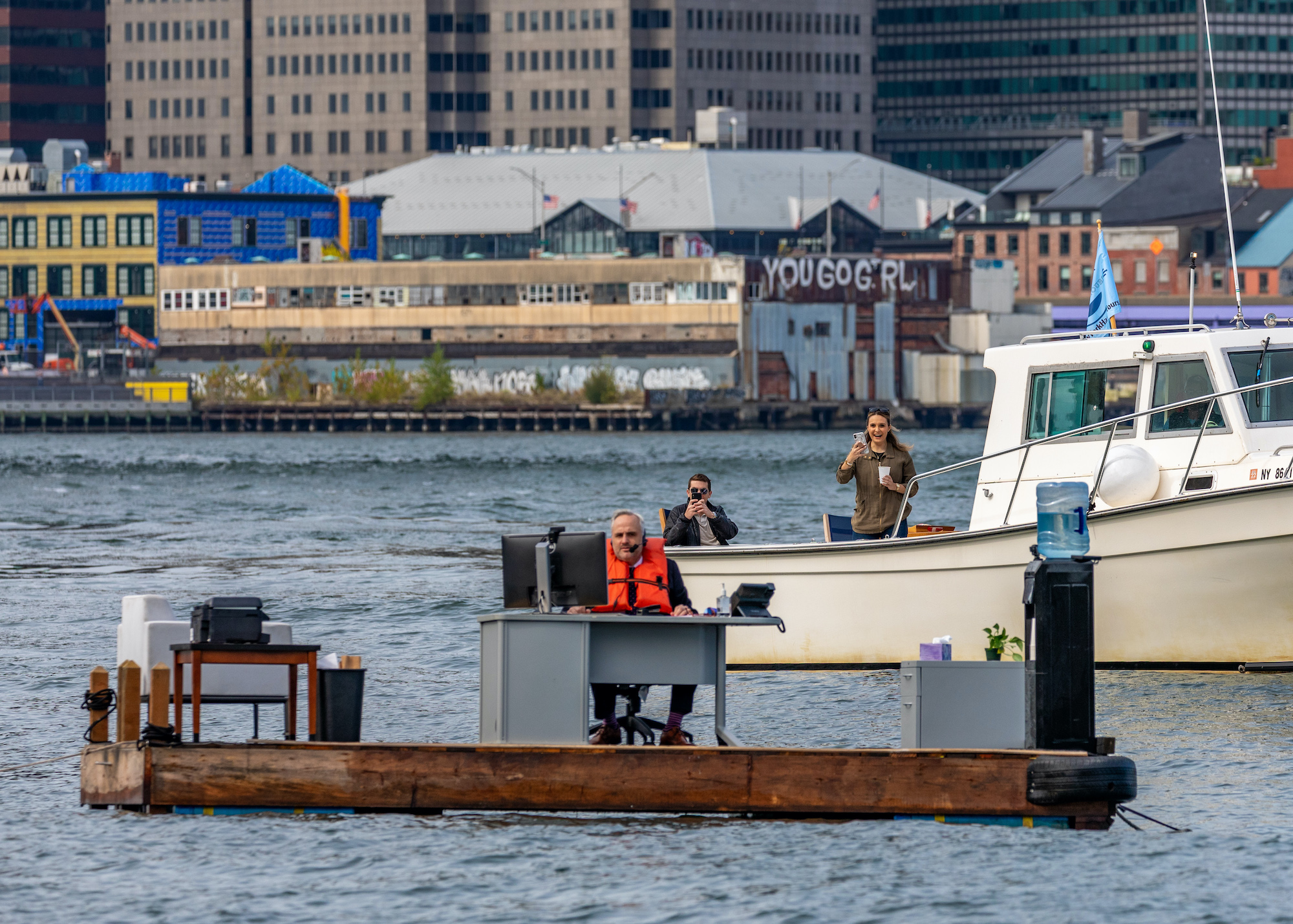 The woman on the boat took a short video and posted it to her TikTok. It ended up going viral on Tiktok and got picked up by E! News and People Magazine getting millions of views on their social pages along with lots of confused comments. Hopefully our video clears things up. 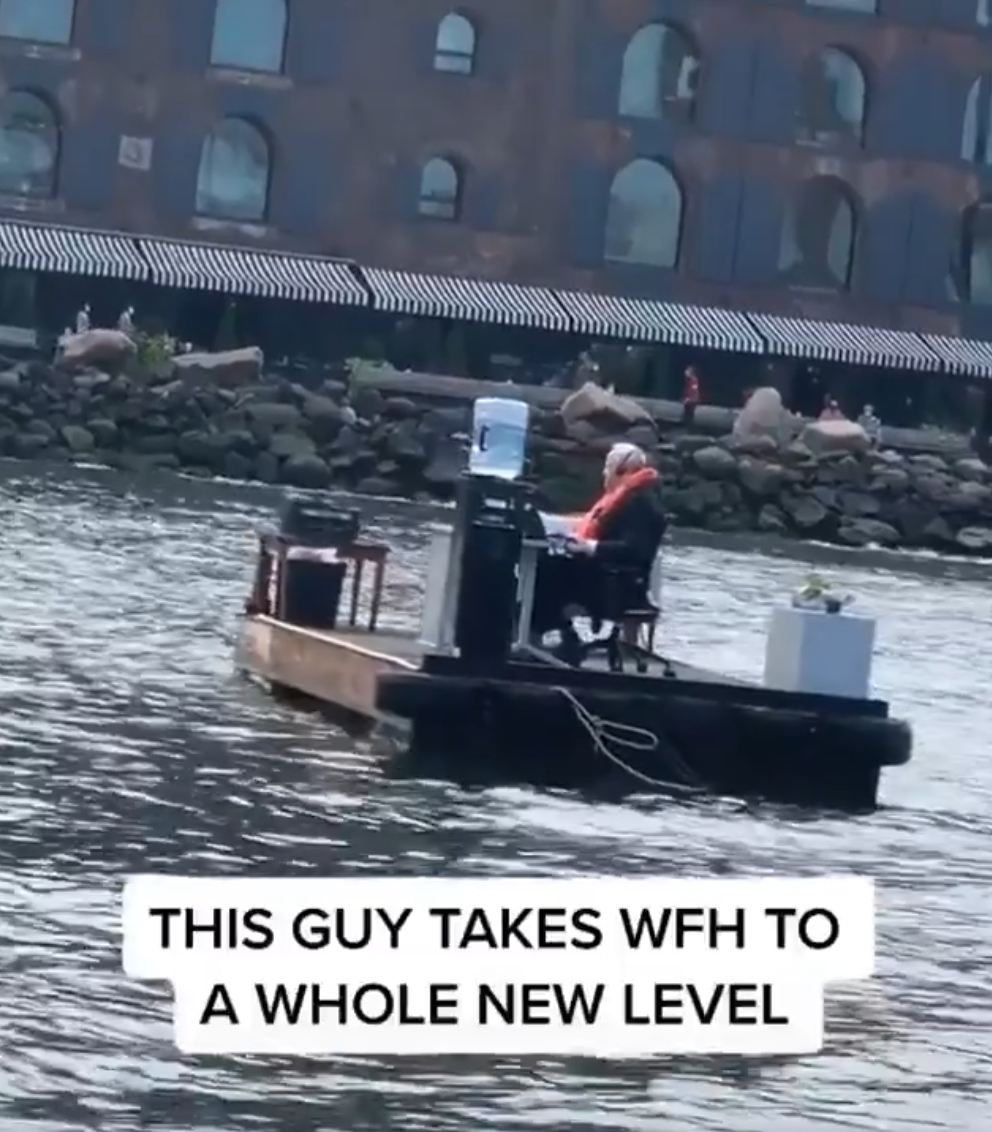 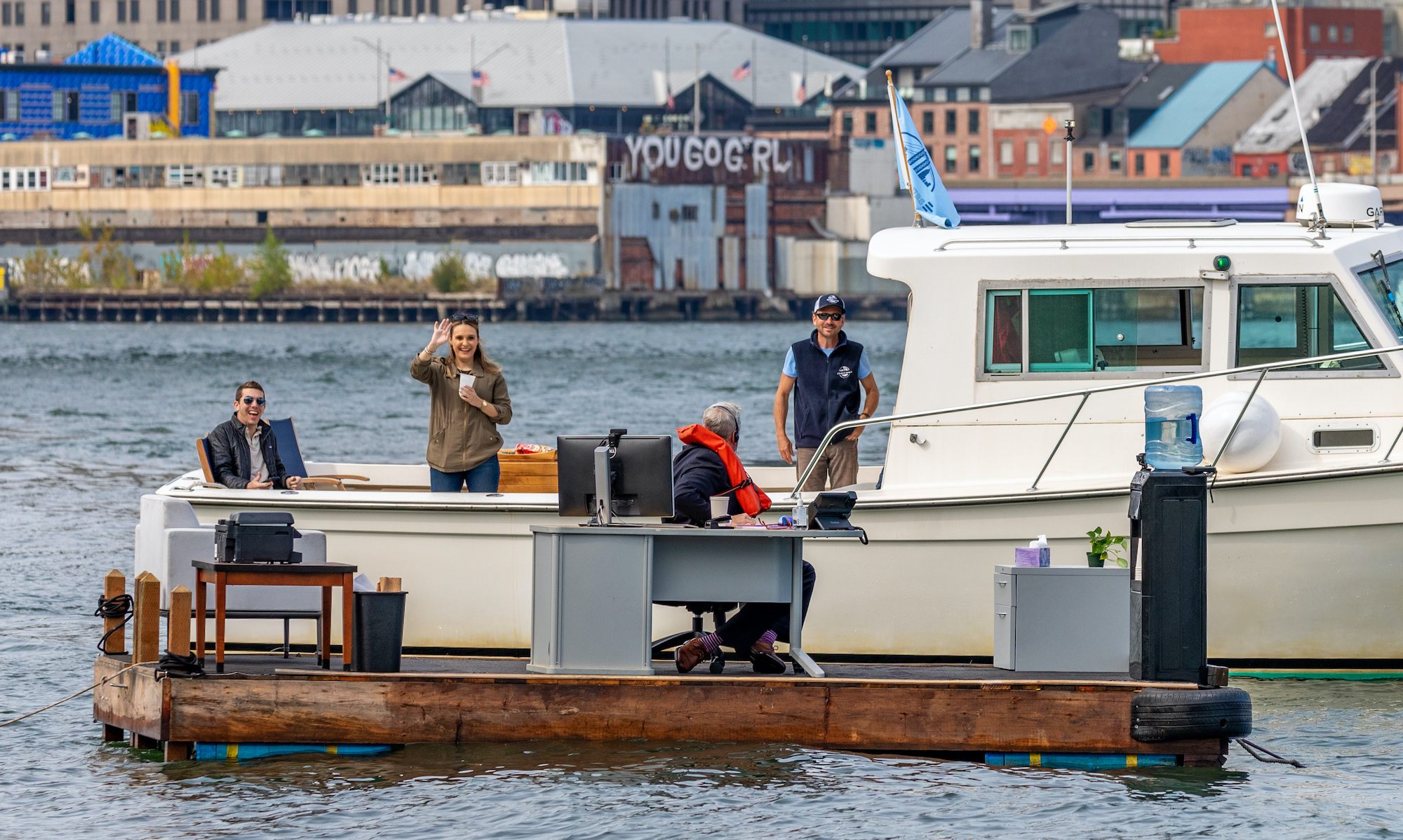 Jesse played it straight and told them he couldn’t really talk due to his important meeting. 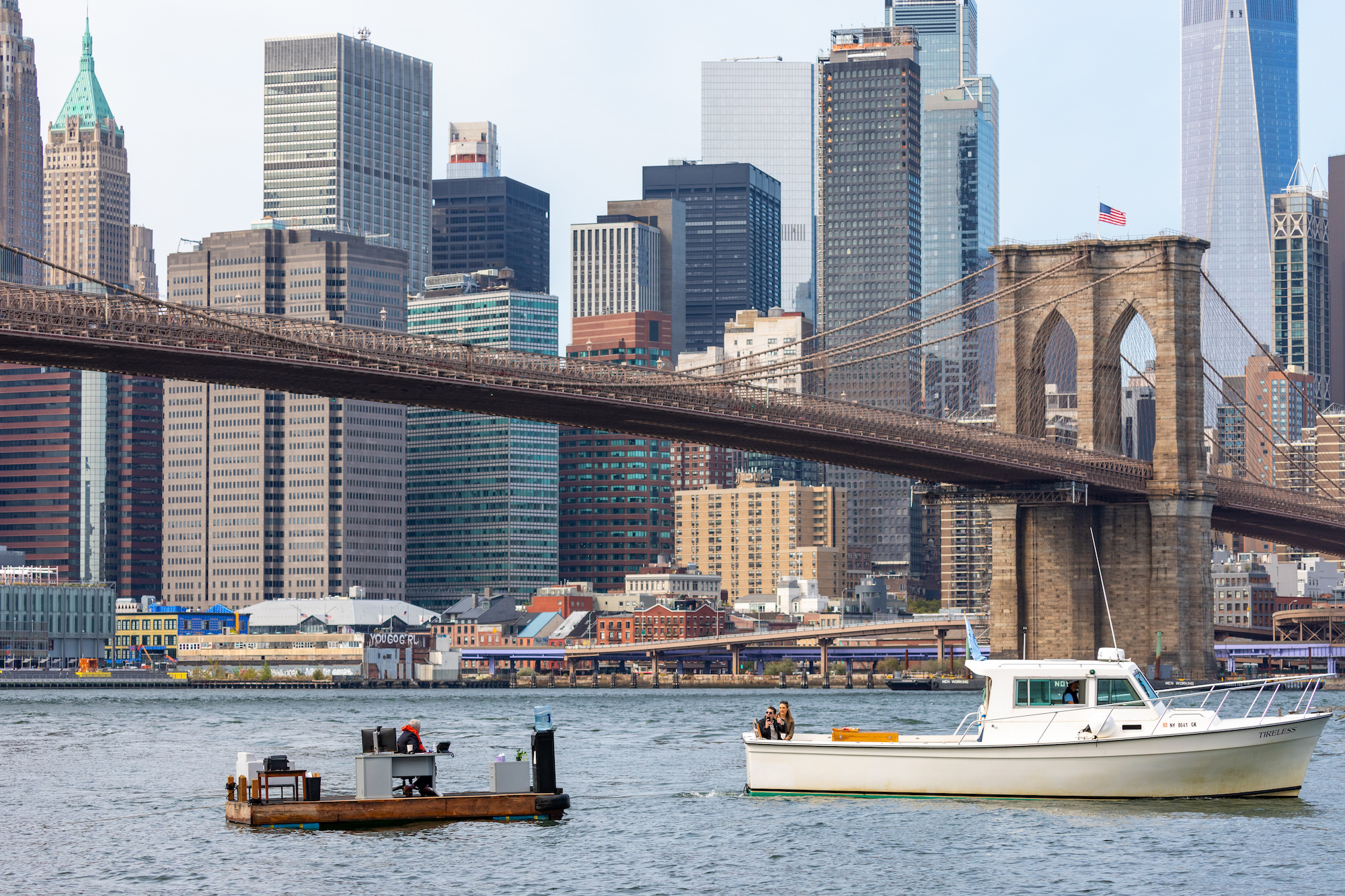 All in all a super fun day with lots of great reactions and feedback from New Yorkers. It’s been a long year for everyone, and it felt really good to get back out there and do what we do, even if it had to be done at an extreme social distance! 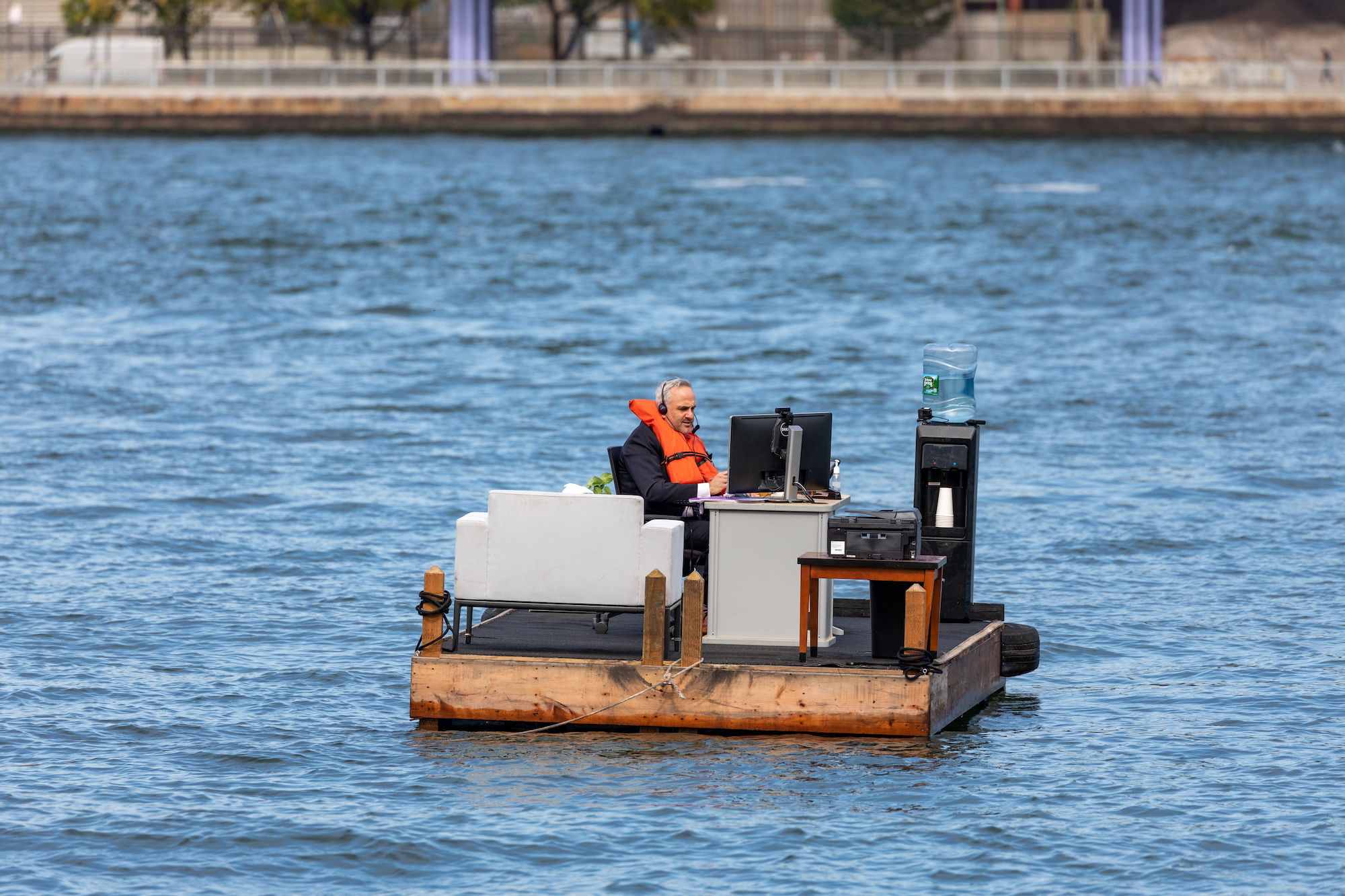 Music for this video was created by our composer Tyler Walker. Check out his site to download free songs

Would you like your very own looping Zoom video background from the point of view of the floating office? OK, here it is!

Nice photo of the Tideland Institute folks building the raft!