For our latest mission, we turned a pair of phone booths on 6th Avenue into coworking spaces. Real New Yorkers were invited to try out the new “WeWork Street” service and learn about the many benefits of outdoor coworking. This unauthorized project was a collaboration with Deanna Director and Maggie McClurken, who we worked with on the Fake Apple Store project, as well as public space artist Jordan Seiler, who lent his phone booth expertise. This project was not a collaboration with WeWork, but we hope they like it and hope they will consider the idea for their ever-expanding empire. 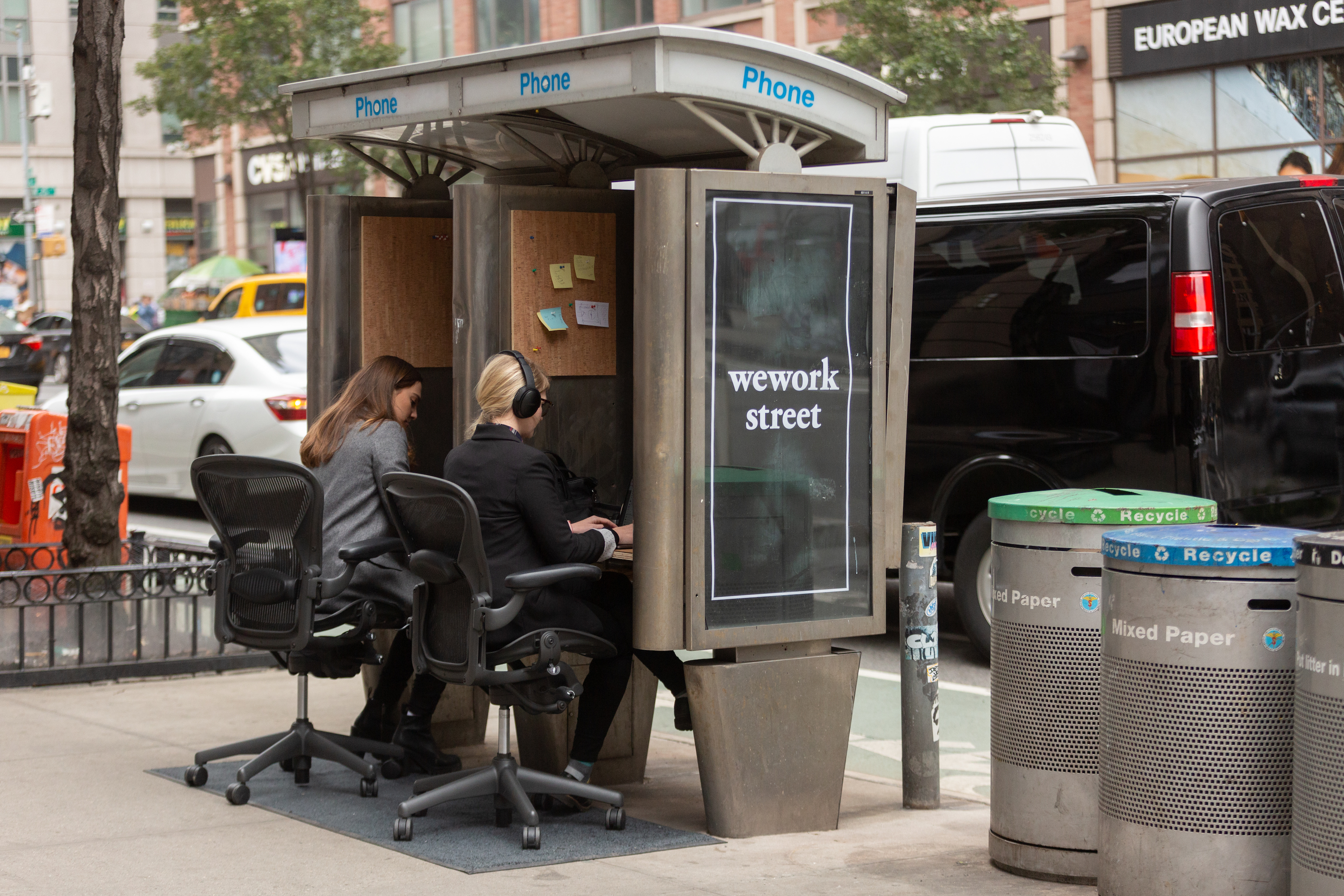 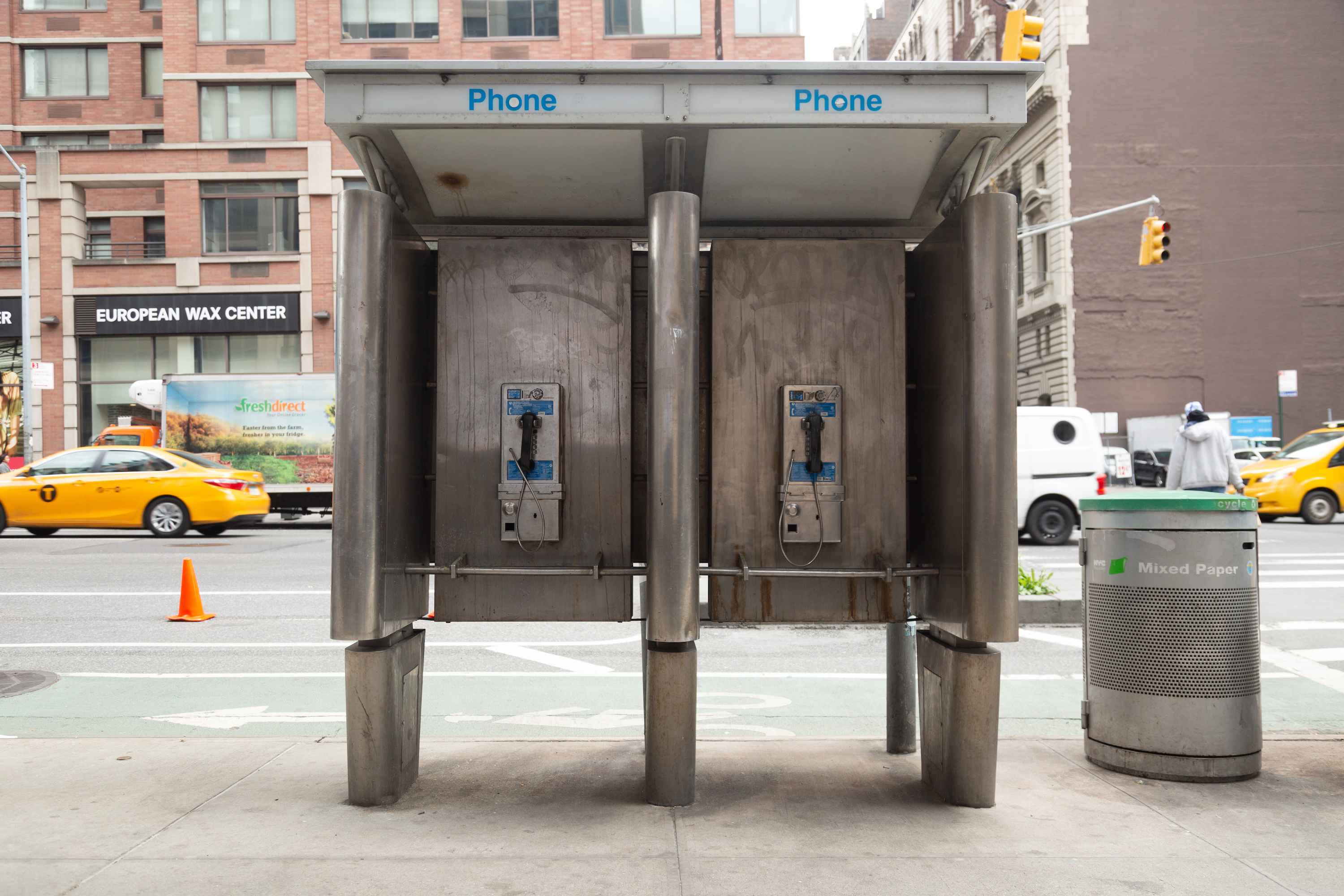 I hate payphones. In New York City in 2018, payphone booths are basically public urinals covered in advertising. They are slowly starting to die and get replaced by Wi-Fi kiosks, but it’s not happening fast enough. Nearly 8,000 of them are still up. A little history:

In the ’90s, payphone companies started putting ads on their kiosks. Payphones popped up everywhere just when people stopped using them. In peak years, more than 30,000 public payphones stood on the streets of New York. You wouldn’t be able to get that many billboards without the payphone.
– Marketplace

I used to live on a block on 8th Avenue that had ten payphones. Ten! On one block! I understand there are people without the means to afford a cellphone and that there are times when a dead battery or a broken cell phone may cause someone to need a payphone. But ten on one small block? Clearly the structures are nothing more than a sneaky way to pollute our streets with more outdoor advertising. Artist Jordan Seiler is known for replacing phone booth ads with art. He’s even made keys available for phone booths in different cities around the world so others can do the same. We knew we needed his help for this project. 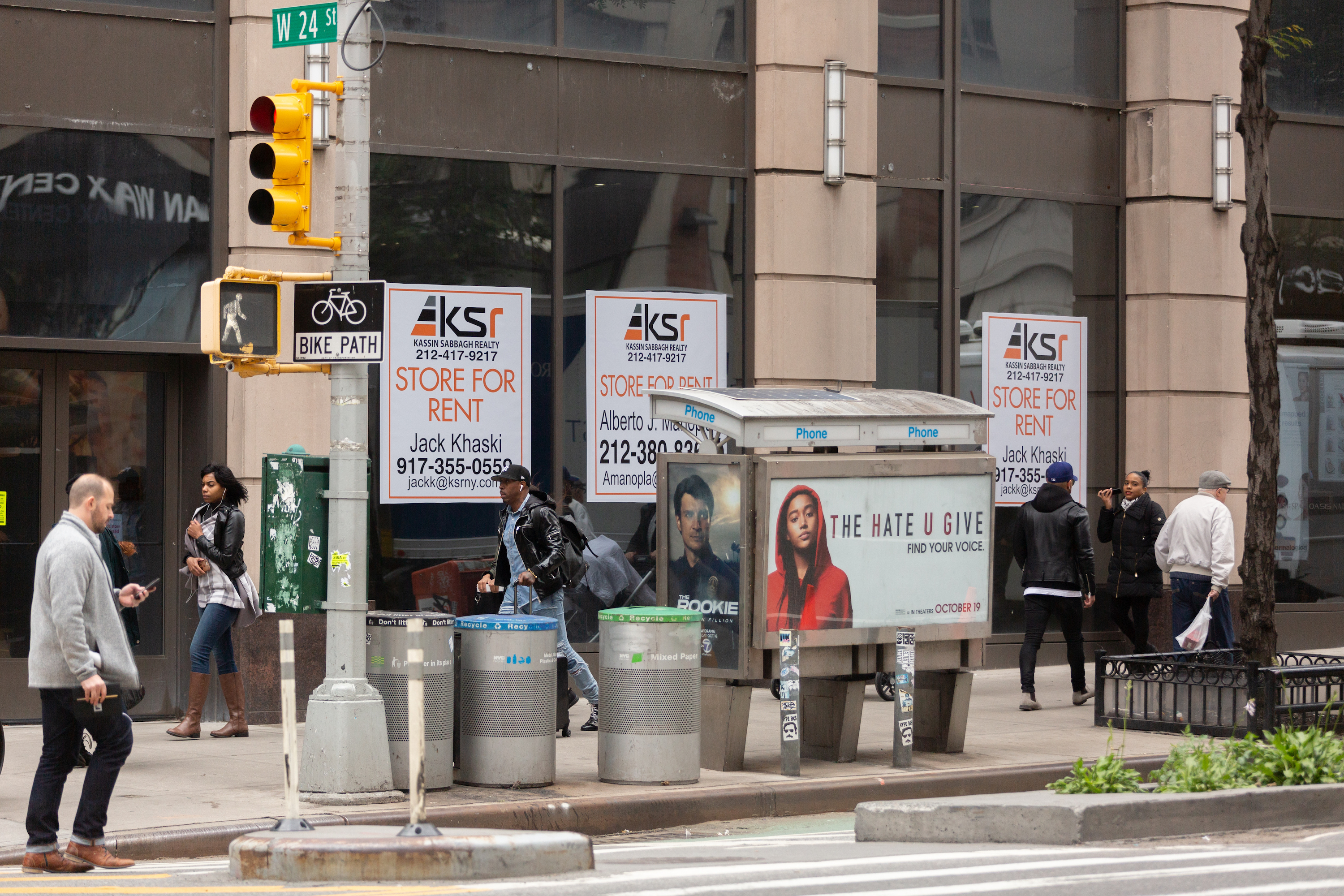 We chose a phone booth on 6th Avenue and 24th Street. It was in front of vacant retail space, which meant our scene wouldn’t be too disruptive. It was across the street from a Starbucks, giving us access to that sweet free Wi-Fi. The booth itself was disgusting; it was literally covered in vomit. 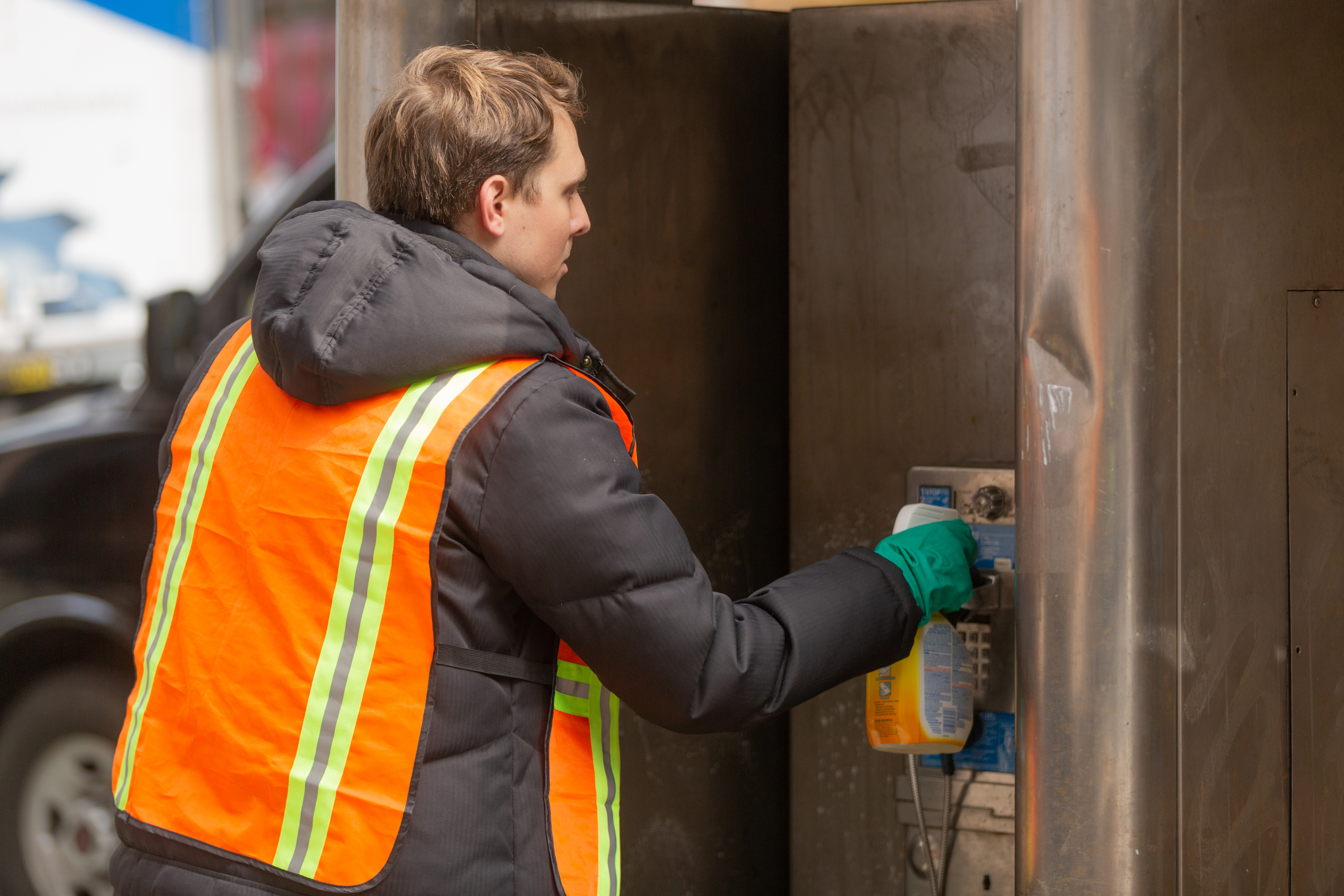 Agent Aleks Arcabascio took on the task of cleaning up the puke prior to our install. 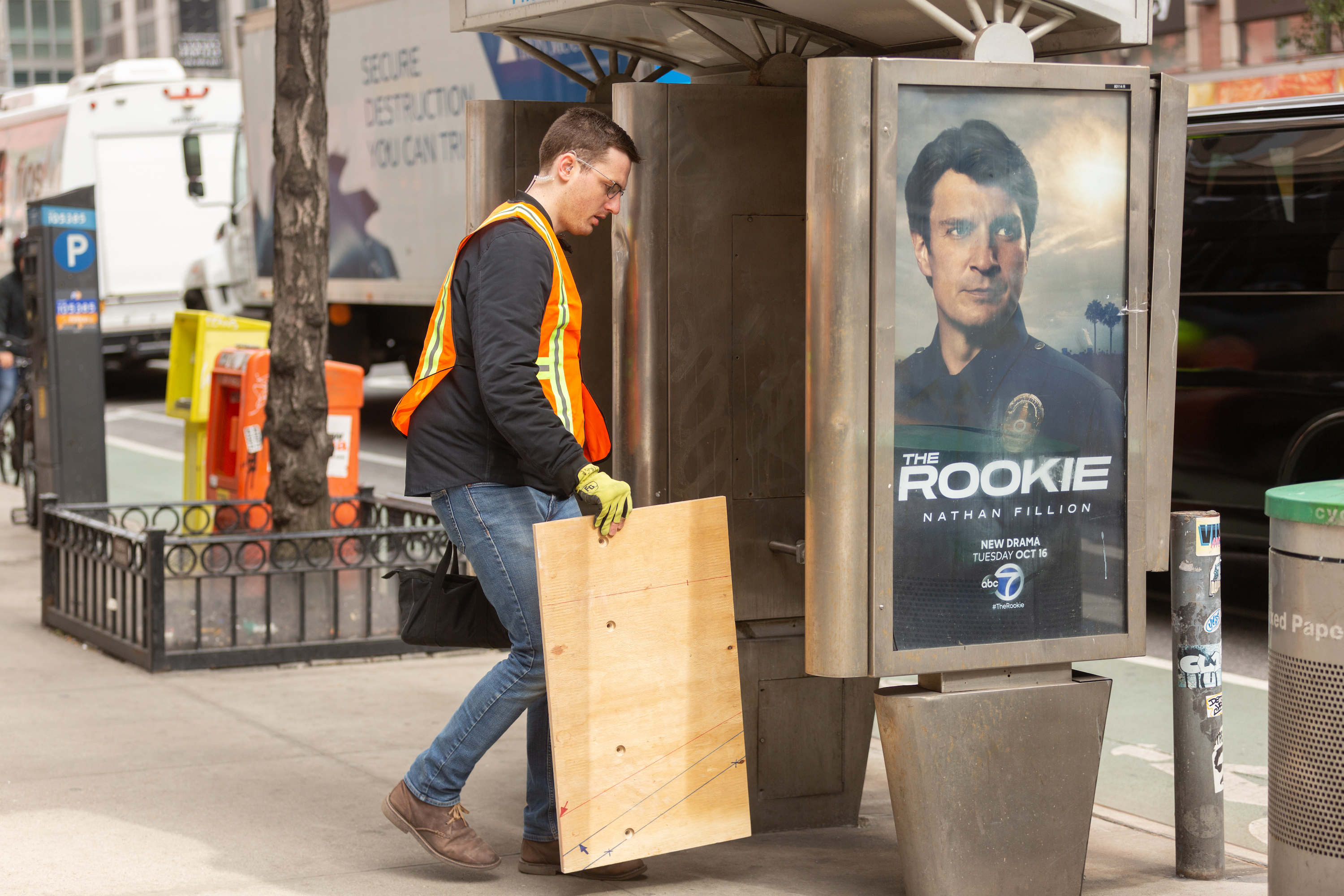 Agent Andrew Soltys built and installed the desks. It took a bit of trigonometry to get the angles right. 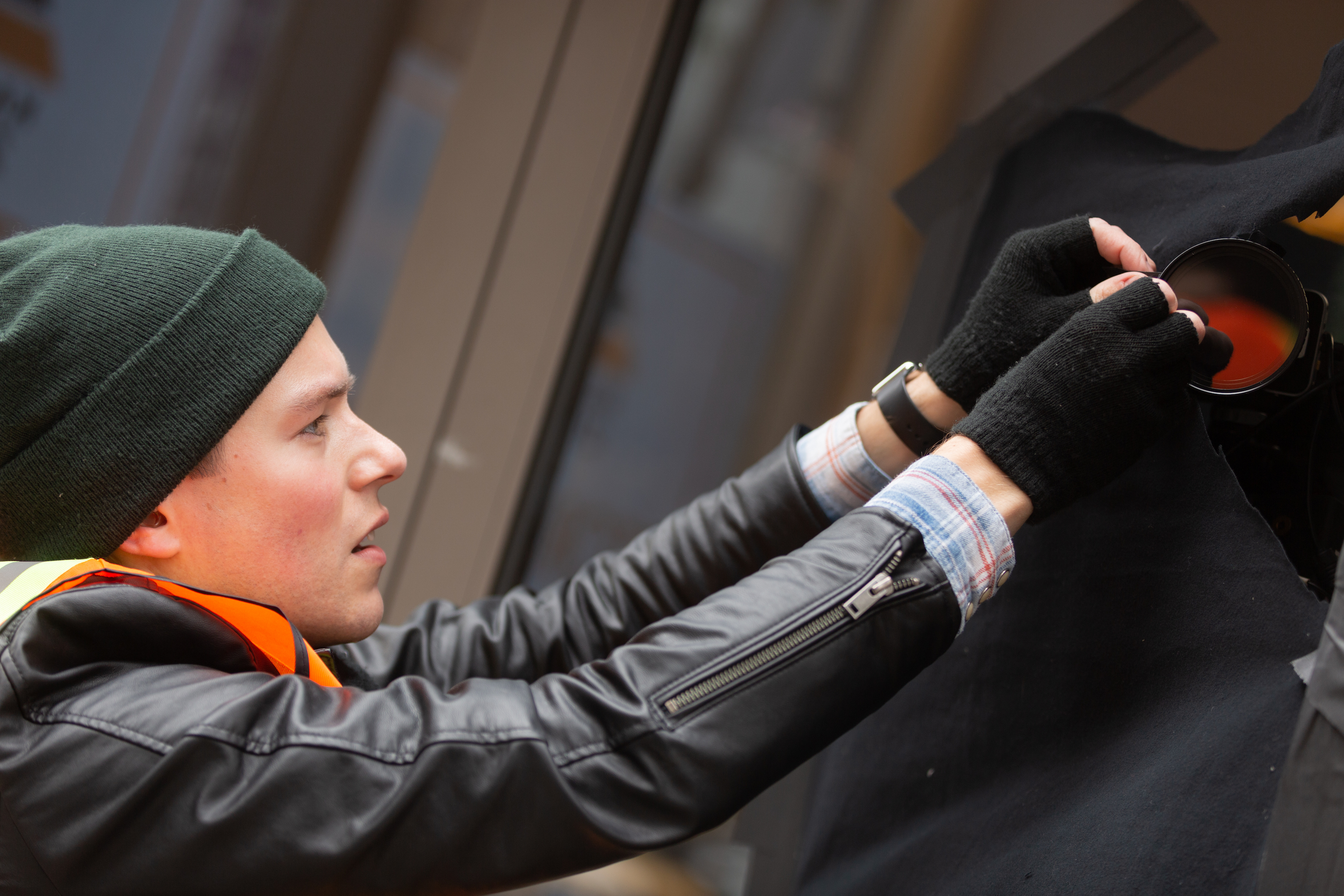 Agent Justin Ayers attaches a hidden camera to the vacant retail space across from the phones. 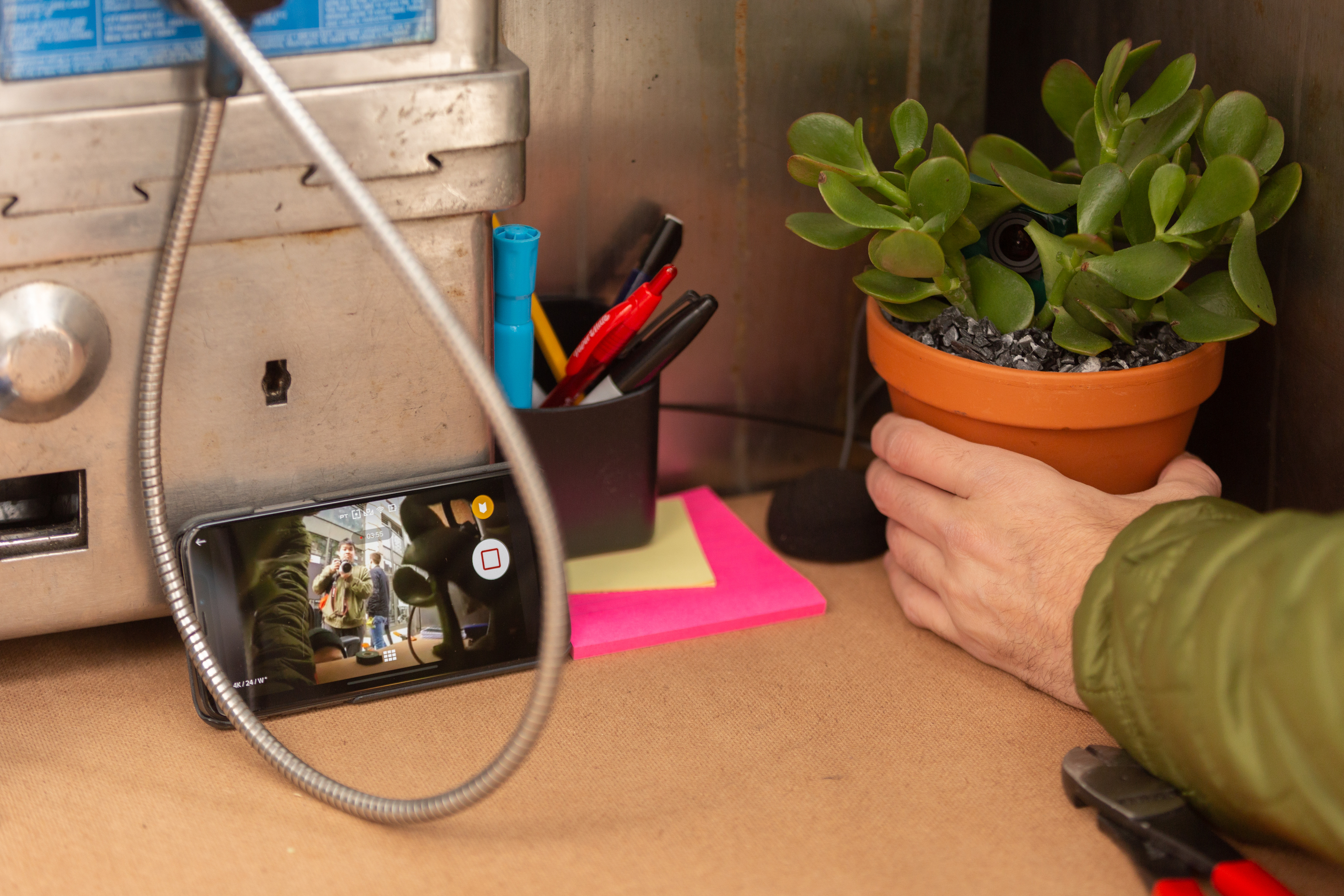 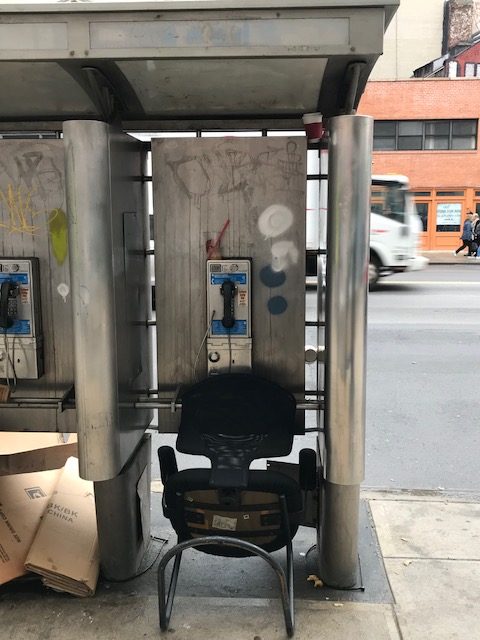 The inspiration for this project came from the phone booth above. Agent Deanna Director stumbled across a phone booth in Chinatown that had a discarded office chair sitting inside. She sent us the photo and wrote, “With the surge of WeWorks popping up everywhere, it only makes sense for them to expand to every corner of Manhattan. What if we re-branded the telephone booths to look like mini WeWork office spaces?” WeWork is indeed popping up everywhere. They recently became the largest private office tenant in New York City, passing JP Morgan Chase, and they’ve expanded into housing (WeLive) and bodegas (WeMRKT). The next logical step is obviously phone booths. 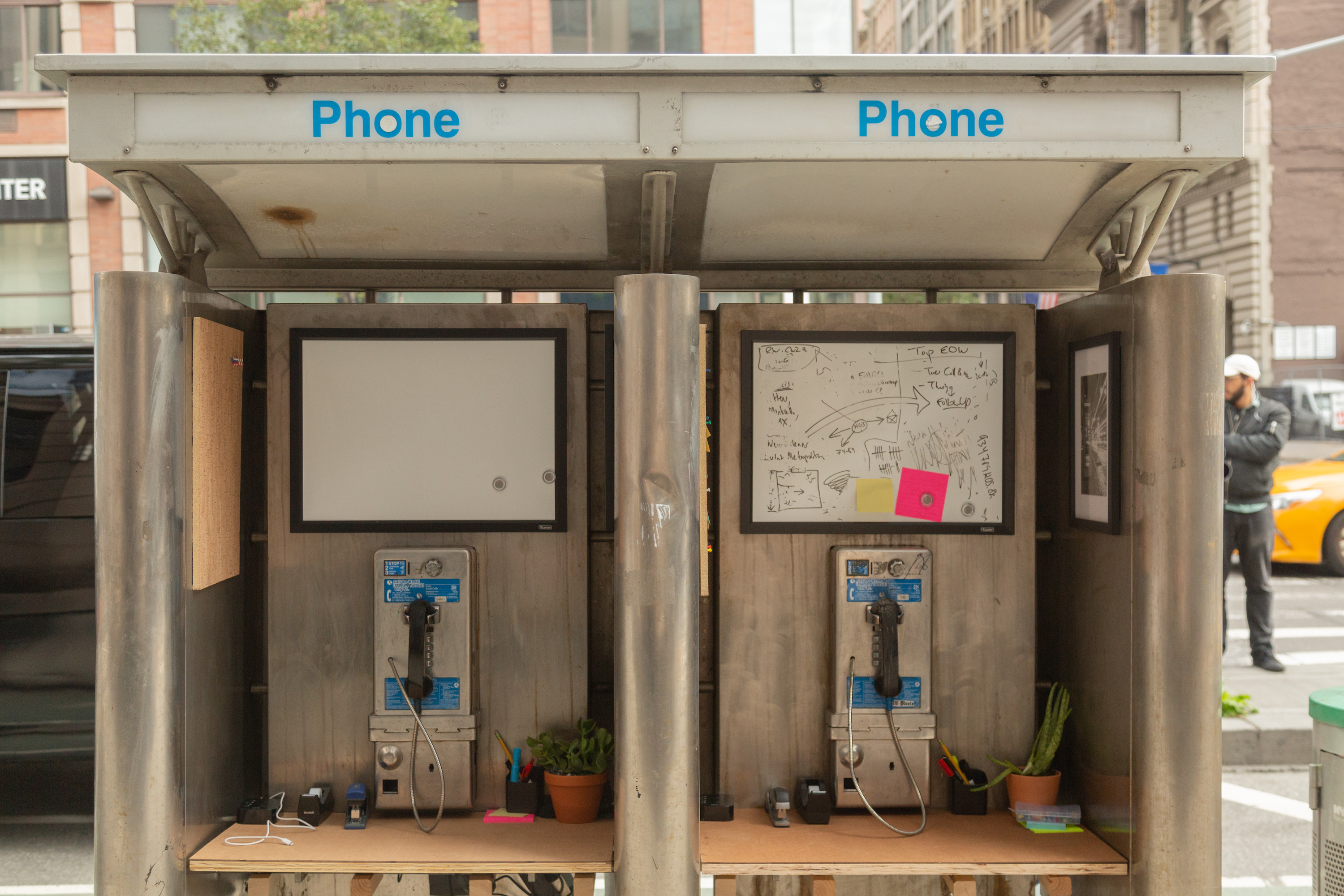 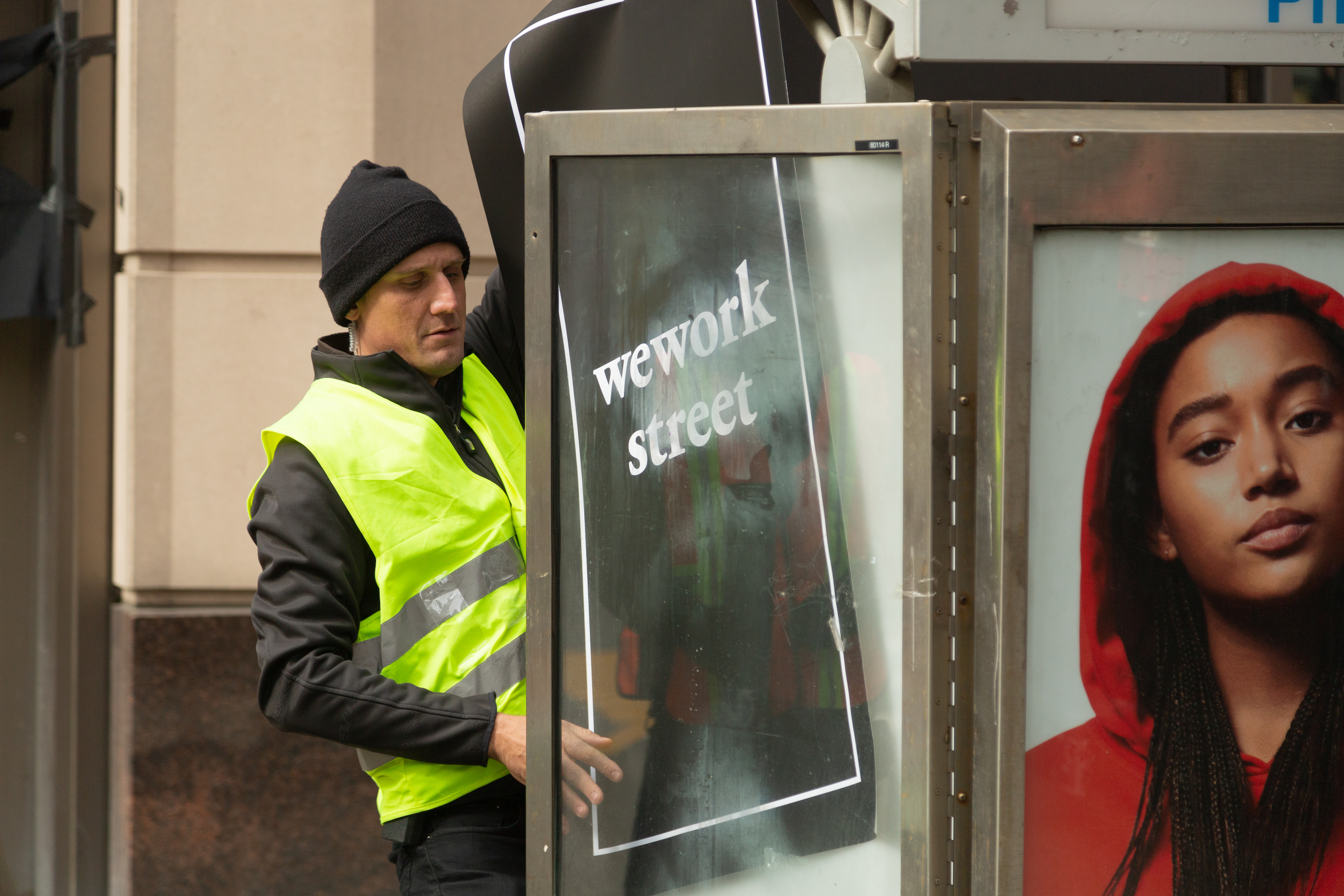 Agent Jordan Seiler removed the existing ads from the booth and inserted our “WeWork Street” branding. 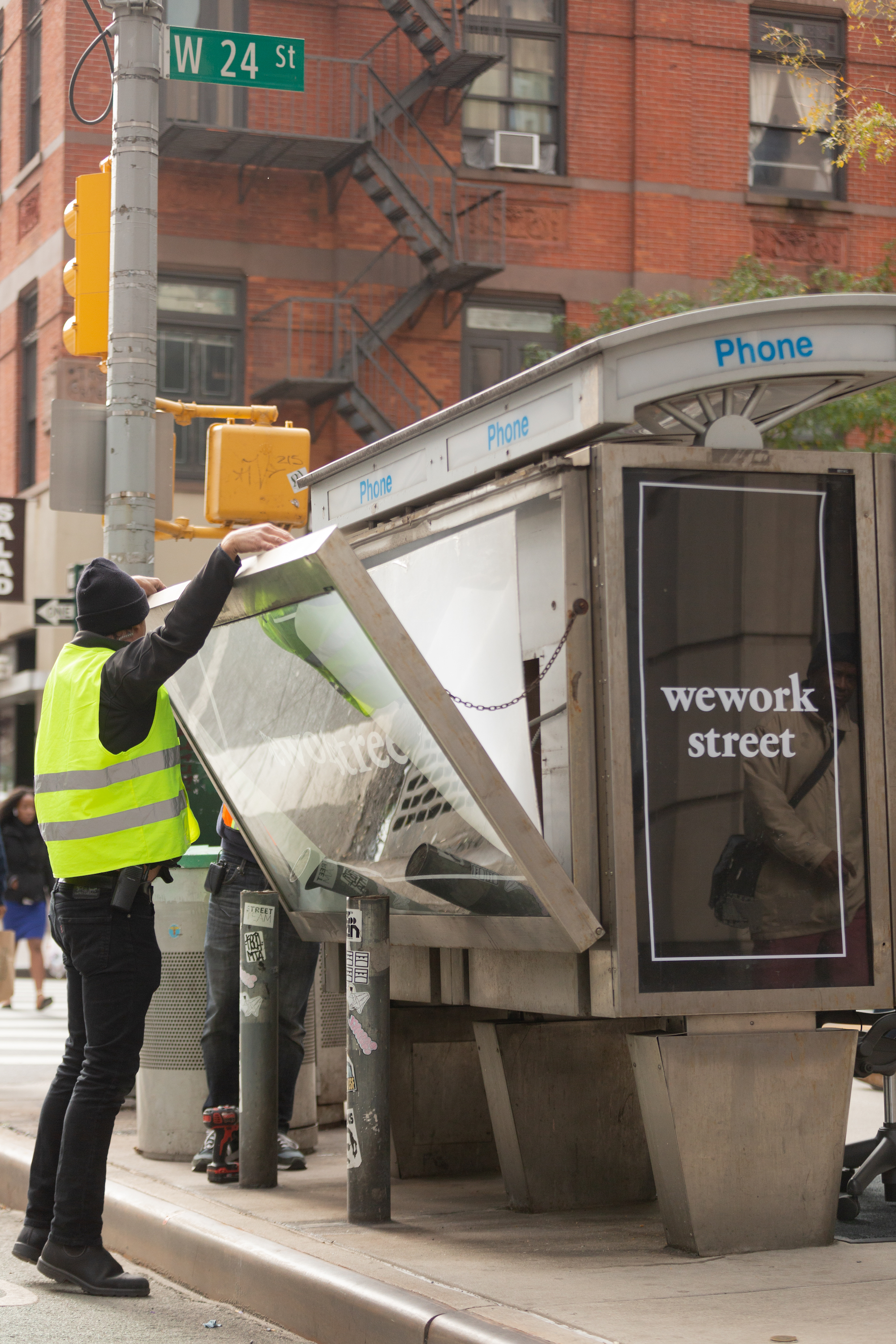 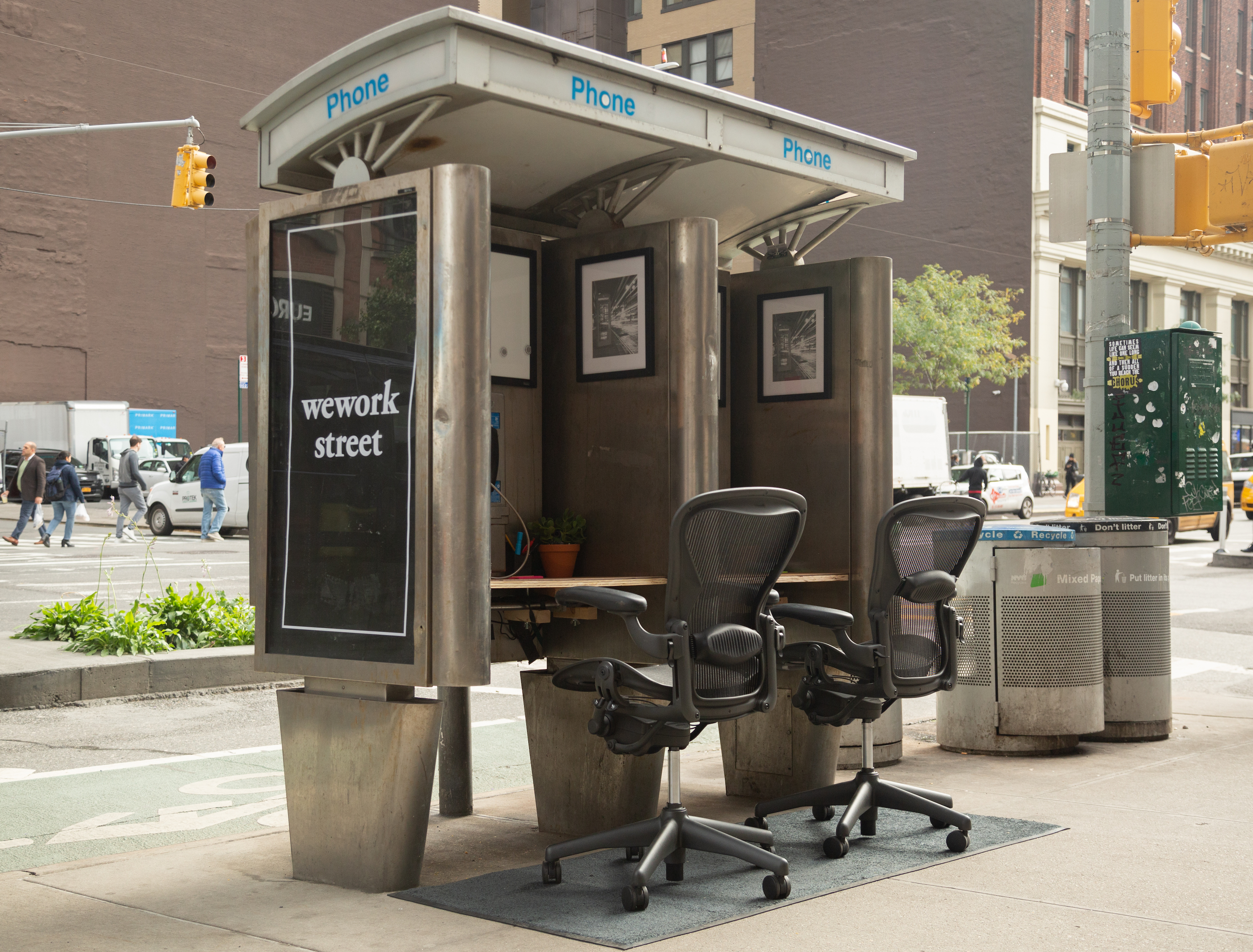 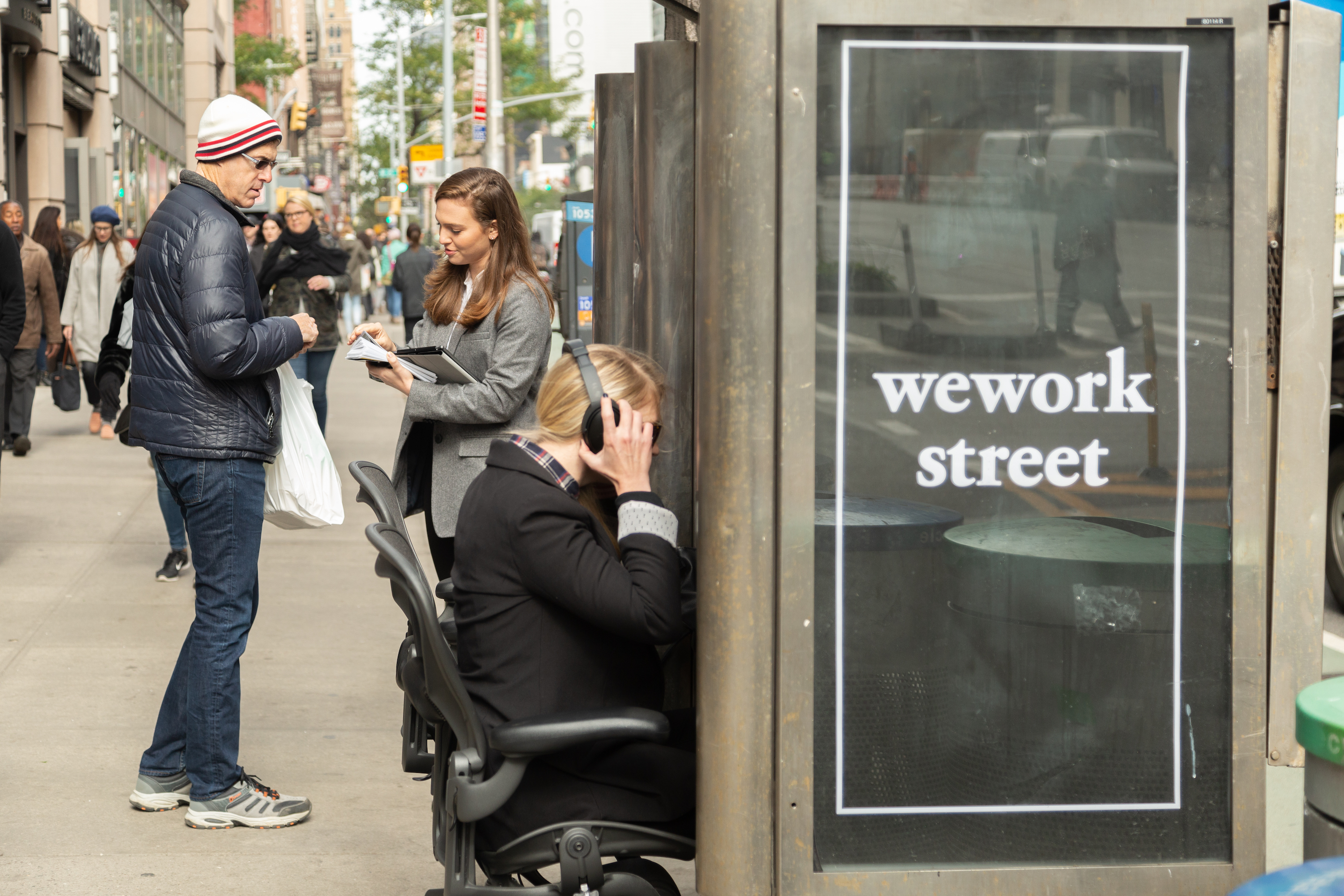 Deanna played the part of a WeWork tenant, quietly working on her laptop in her WeWork Street cubicle, and Agent Addie Weyrich played the part of the WeWork representative, trying to sell the adjacent cube. You might remember Addie from our Subway Sweet 16 mission. The first guy that stopped to talk to her, pictured above, was actually a nearby resident whose building was suing the payphone company to have the phone booths removed, given that they are an eyesore that provide no benefit. He was concerned that our new company might be giving the booths a justification to stay put. We kept a straight face, but we wanted to tell him we were on his side! 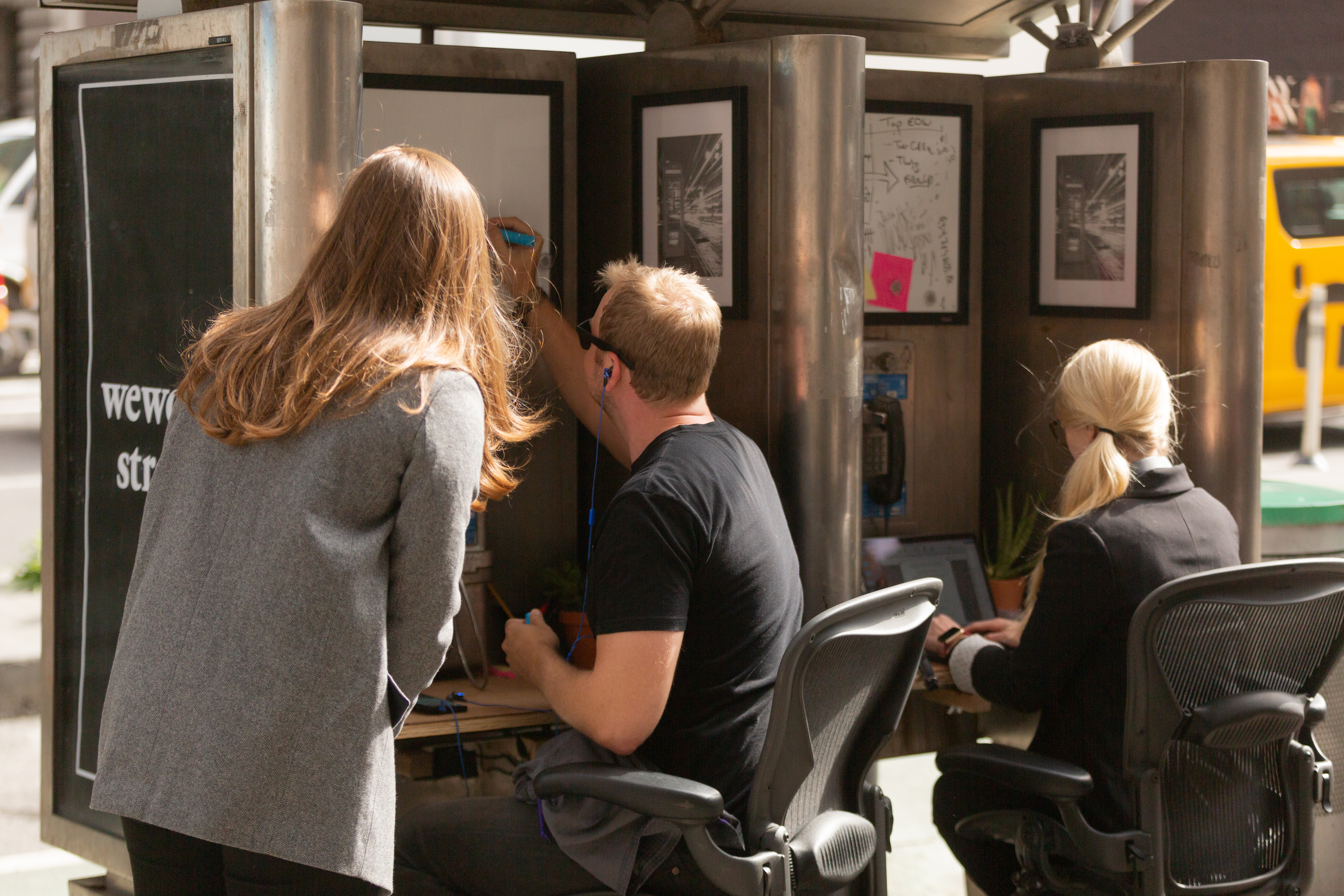 Lots of people stopped to try out the booth, with different levels of skepticism. The guy pictured above was actually on a conference call when he walked by. 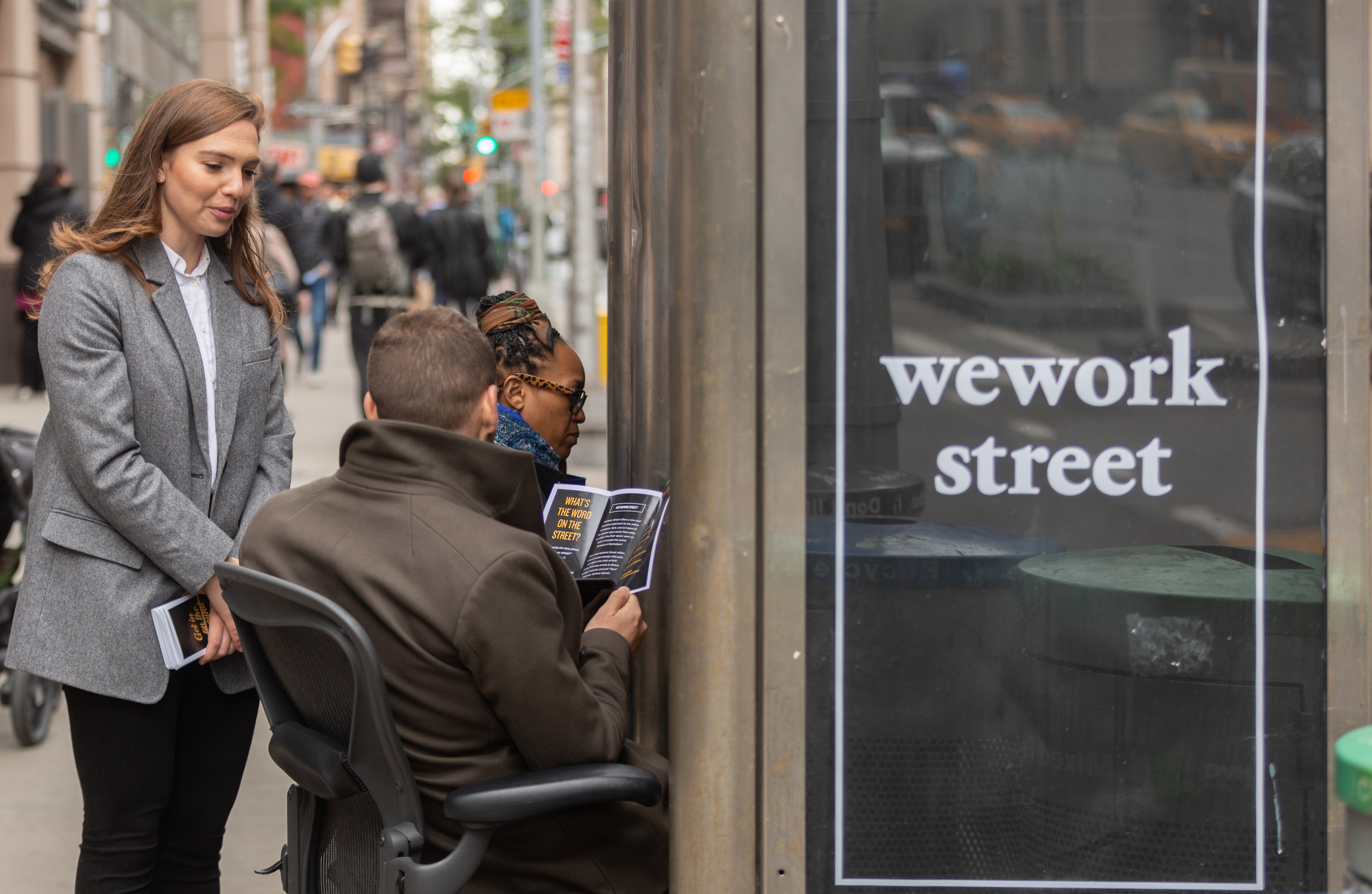 Addie passed out the above brochure and promoted all of the many amenities that come with the $300 a month rent. 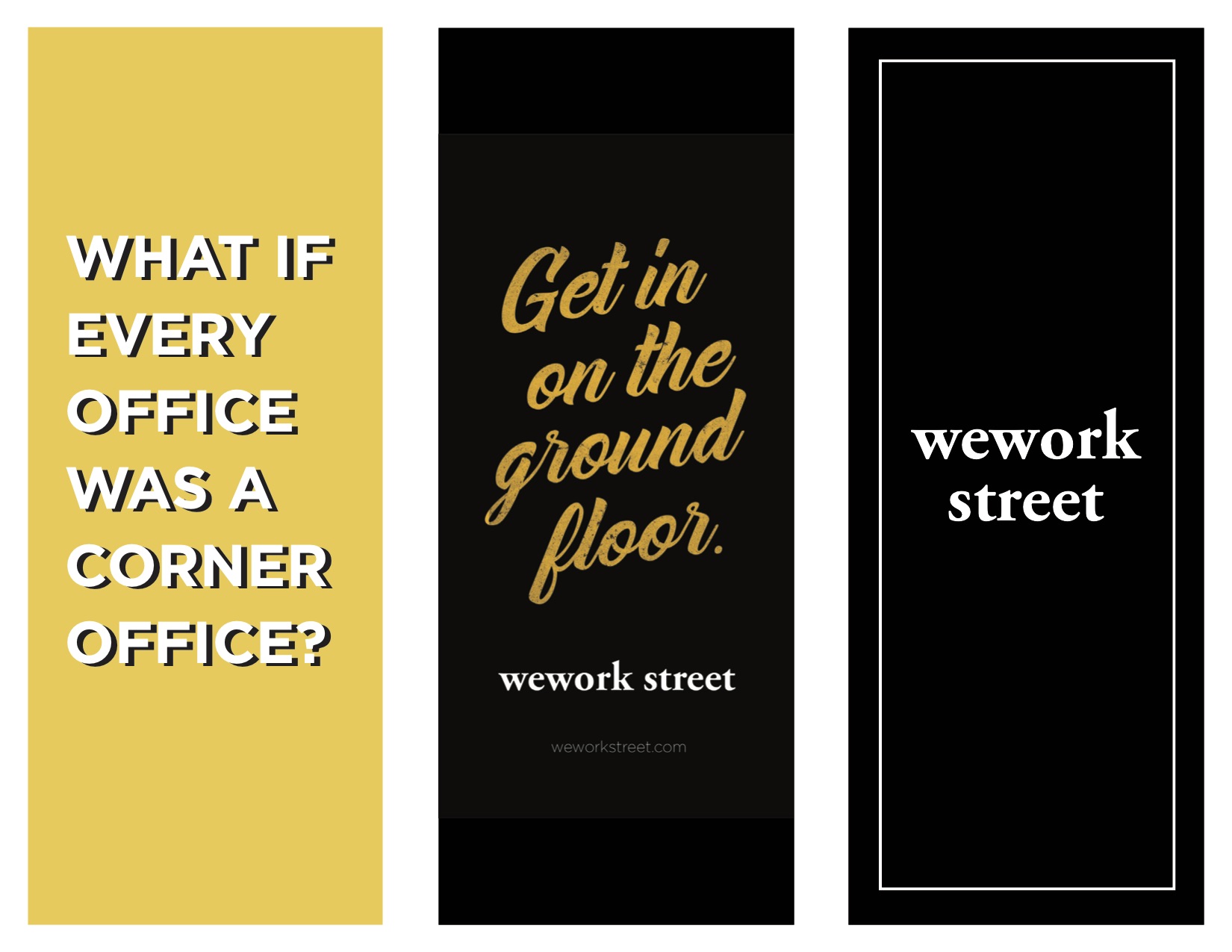 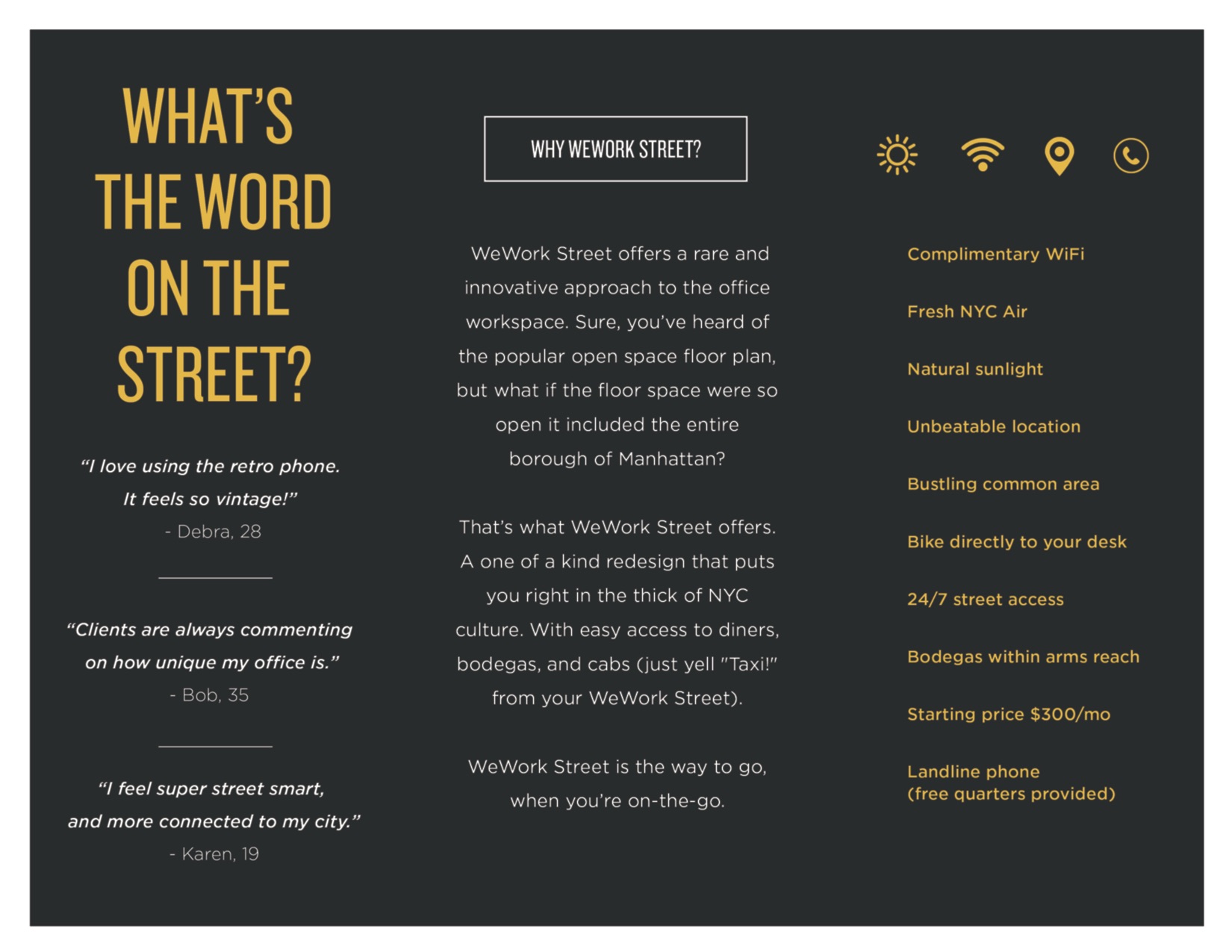 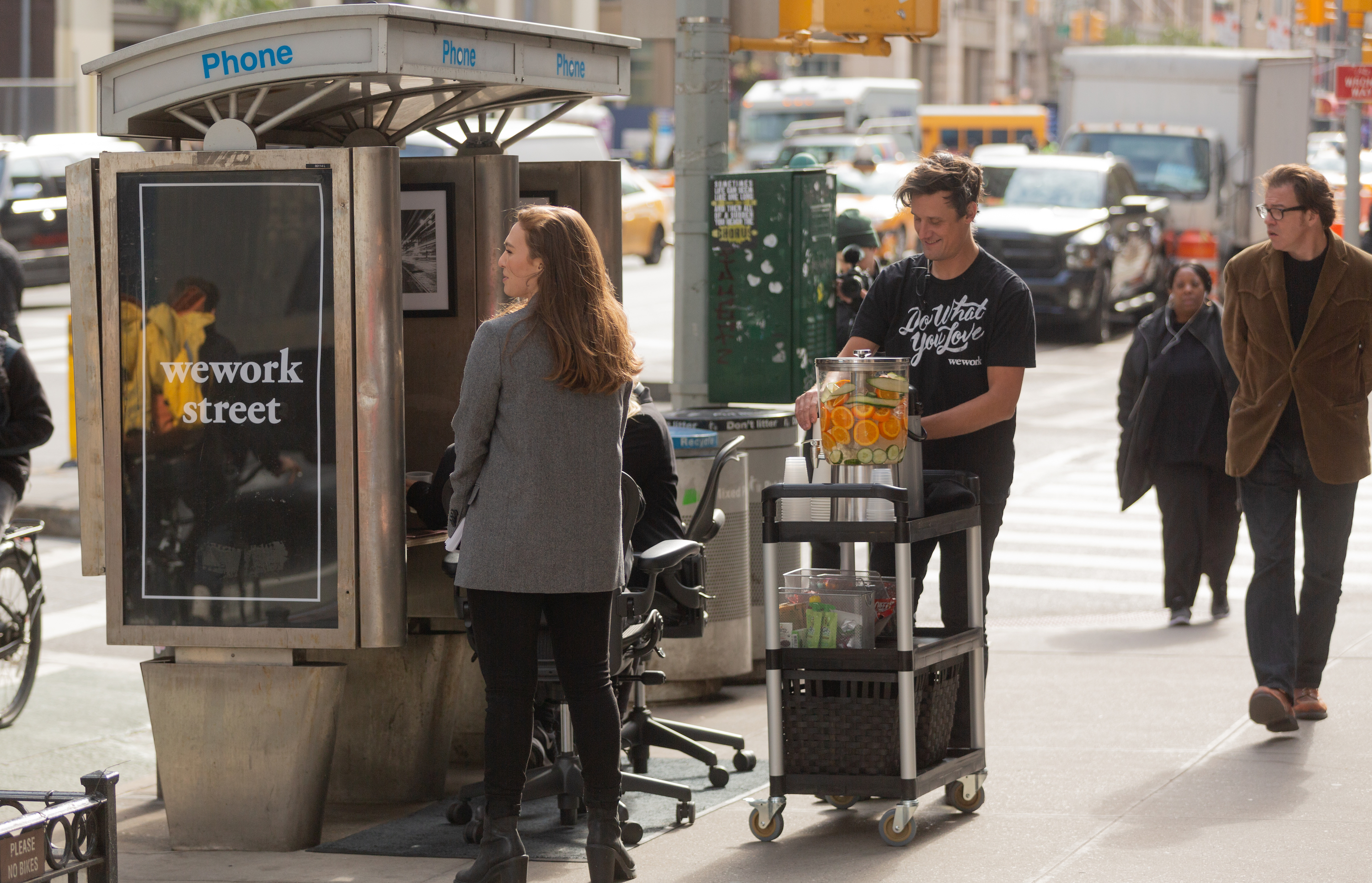 Jordan also played a WeWork employee (complete with t-shirt we found on eBay!) who came around with a beverage cart. He claimed to be making the rounds between the 10 pilot WeWork Street locations around Manhattan. The cart offered the “fruit water” that WeWork boasts about on its website. 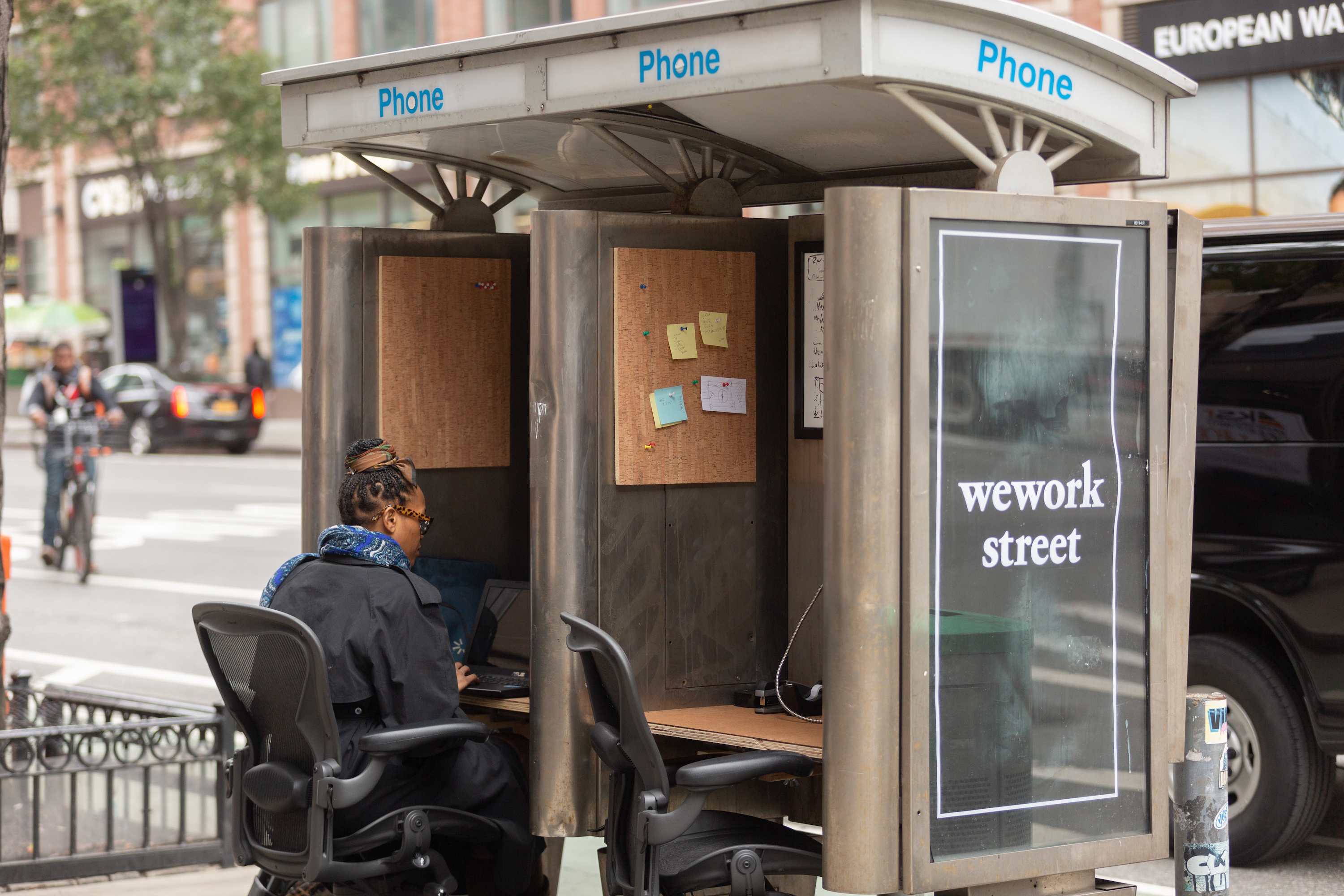 Multiple people took advantage of the free trial and took out their laptops and did a bit of work, despite it being a breezy 45 degrees out. 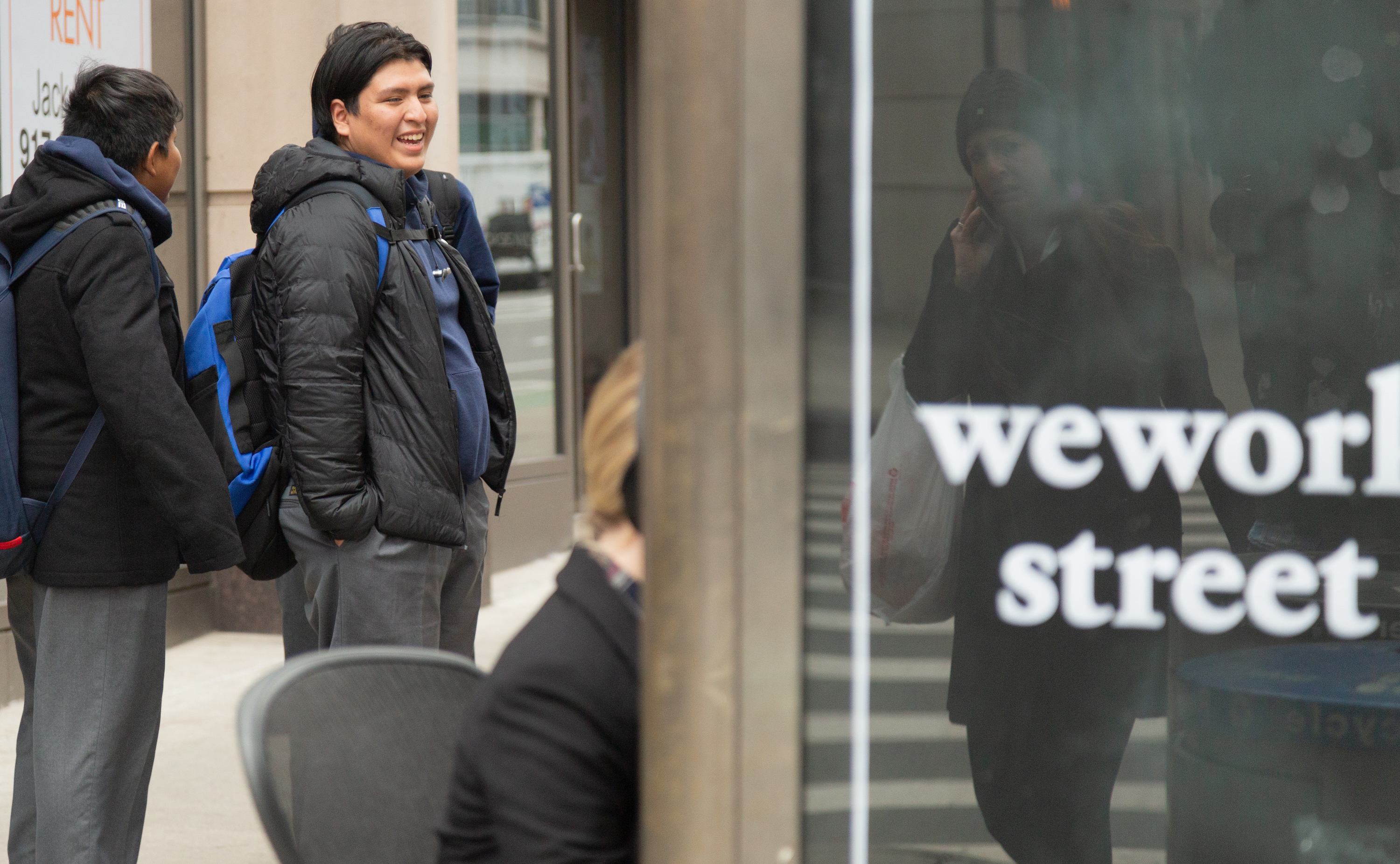 Many people laughed and figured it couldn’t possibly be a real service, though more people than we imagined believed it. 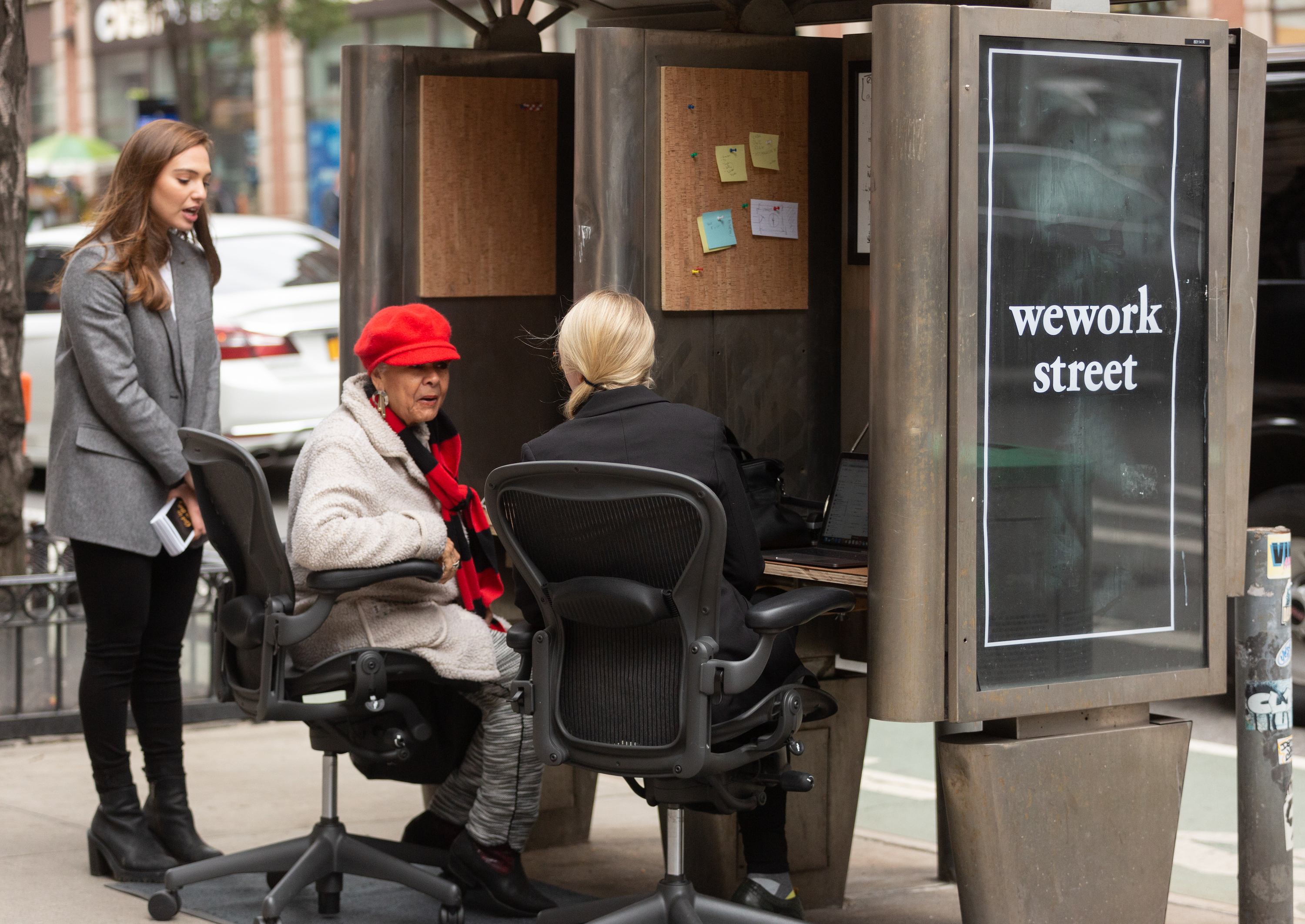 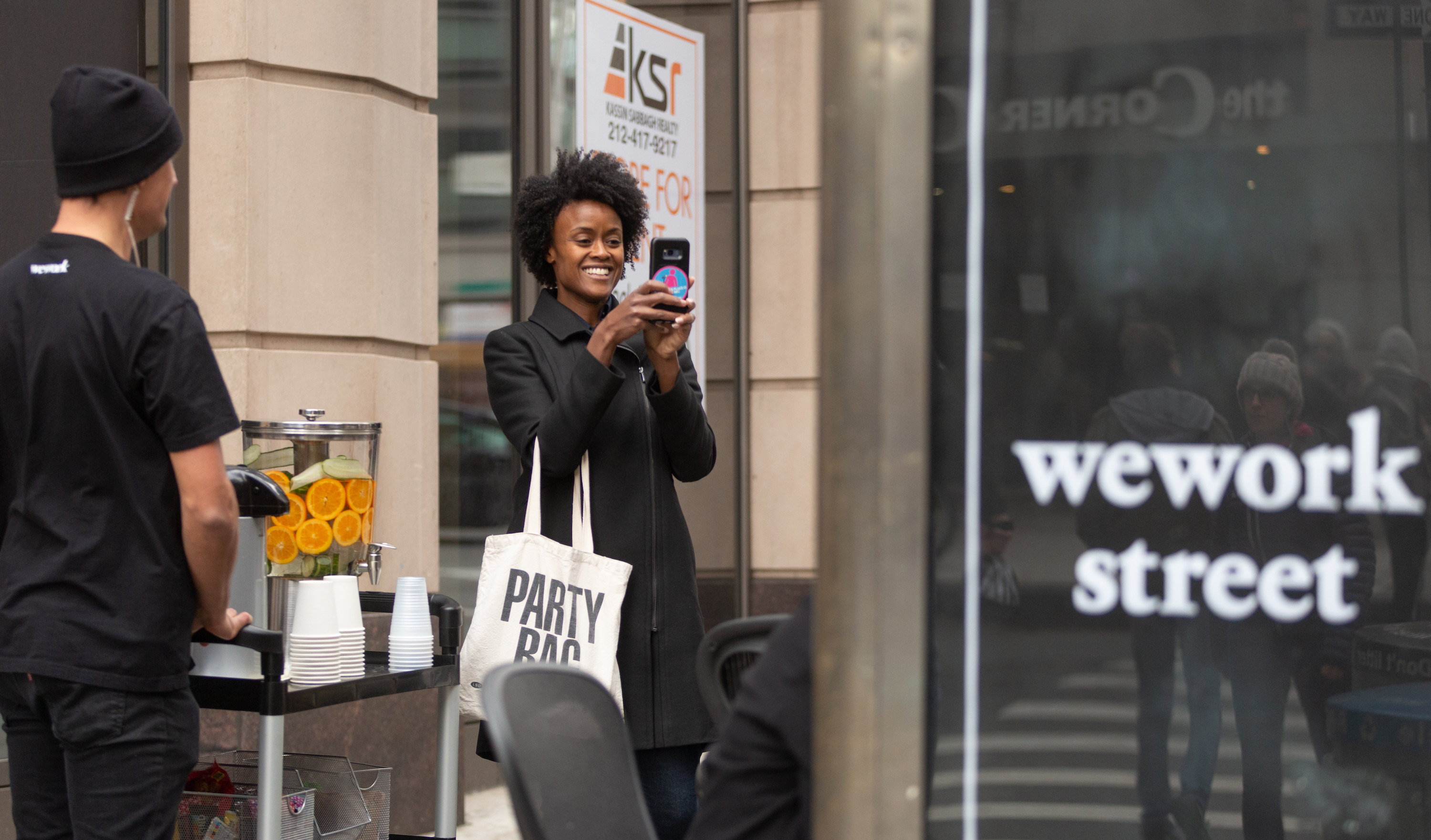 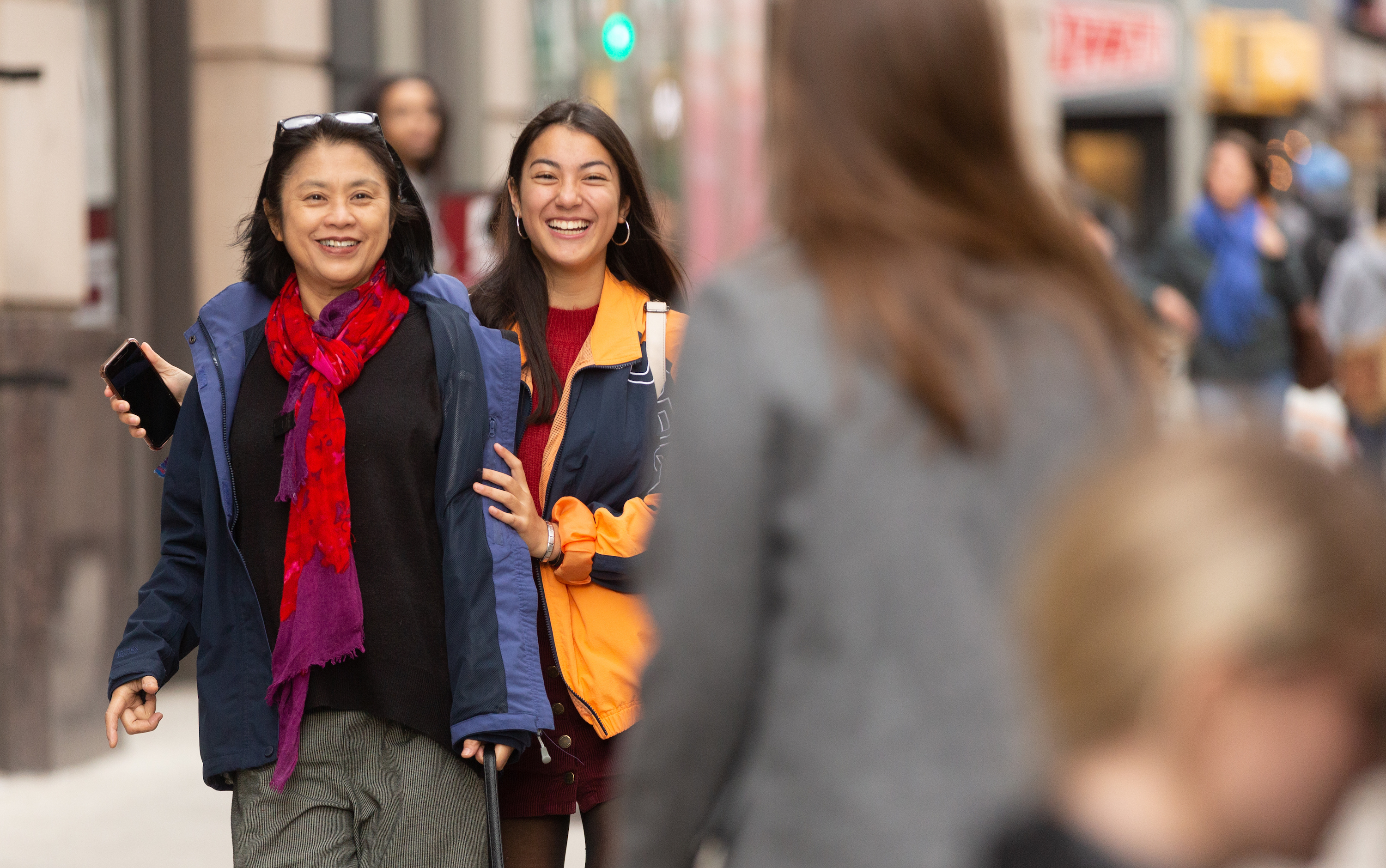 Whether they believed it or not, people had a good time checking it out and talking about it.

Unfortunately no one signed up for introductory $300/month rate. Too bad! A missed opportunity to Get in on the Ground Floor. 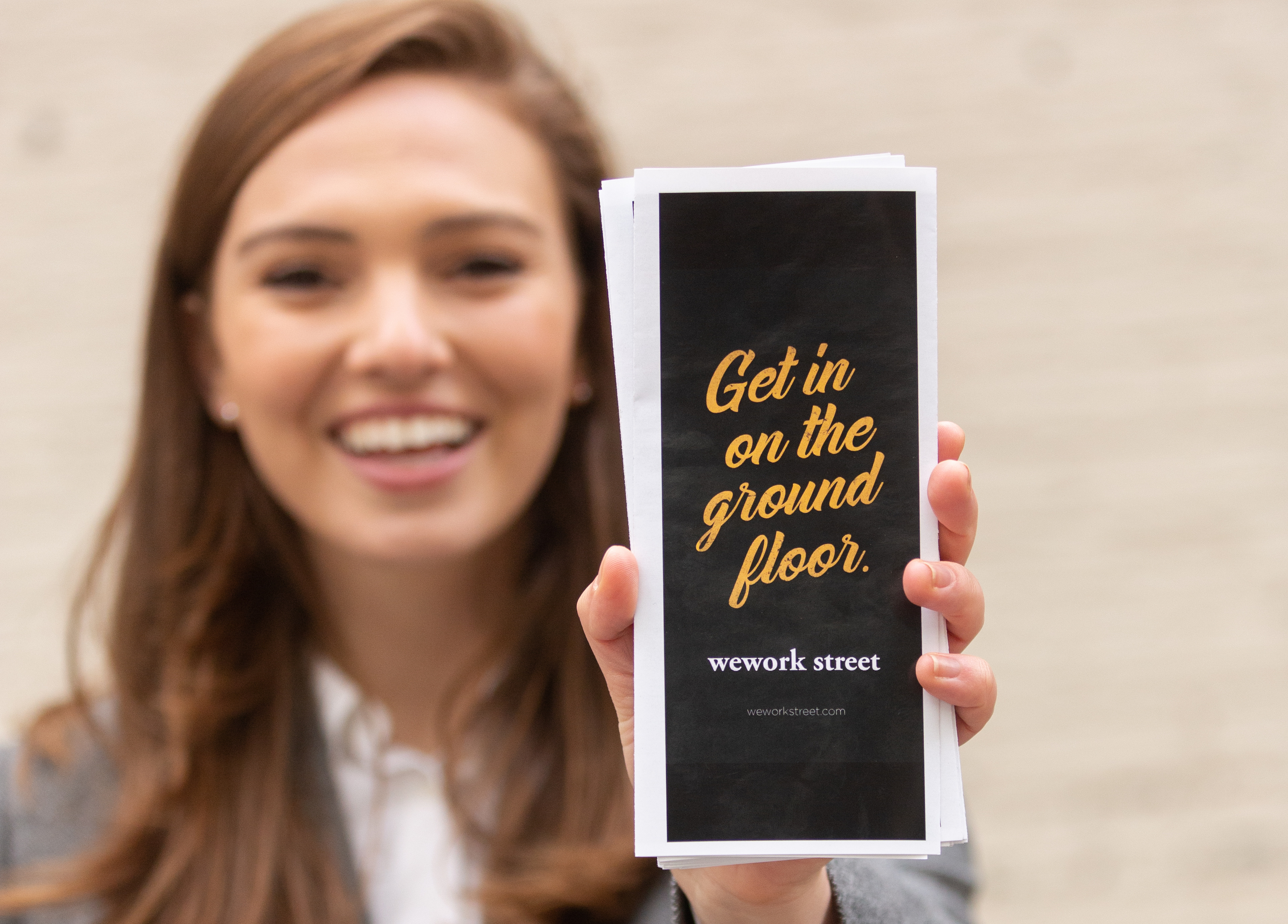 We took the desks apart and returned the booth to normal when we were done for the day. Hopefully all of the booths will be gone soon. Their replacements, LinkNYC, are still polluting the city with (video) advertisements, but at least they offer some useful services (free Wi-Fi, free calls, web browsing, phone charging), and so far they seem to have 100% less vomit and urine. 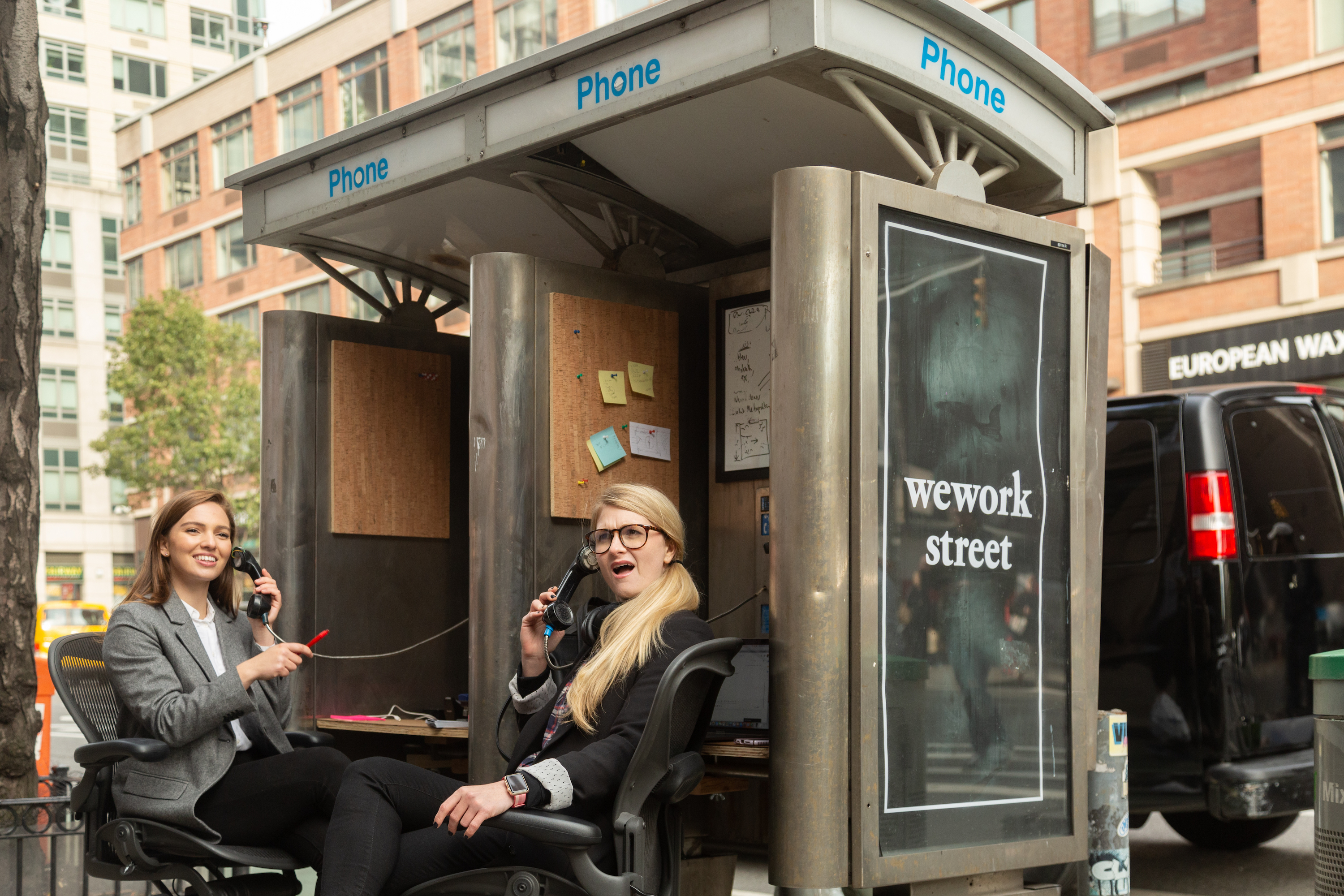 Production photos from photographer Arin Sang-urai (photo credit for all photos on this page).

Music for this video was created by our composer Tyler Walker. Check out his site to download free songs