For our latest mission, we delivered 20 pizzas to a random subway car. Two men posing as MTA officials told passengers that their specific E-train car was determined to be the most courteous car in the entire system, and in recognition of their good behavior they were being rewarded with a pizza party. When the train pulled into the next station, eight pizza guys entered, delivering 20 pizzas in warming bags. 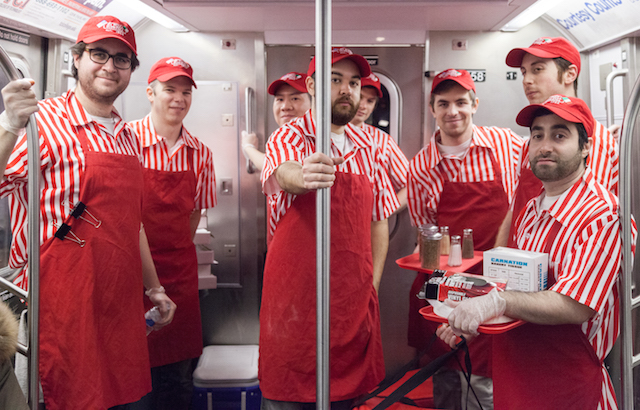 Of all of the subway projects we’ve done over the years, my favorites are the ones that use staggered entrances. It’s just so much fun setting something up, knowing that a surprise is waiting at a later stop. Our Star Wars Subway Car is a great example of the technique; we spread costumed-performers along the subway line. This project felt particularly ridiculous: 8 pizza guys with 20 pizzas standing on a subway platform waiting to deliver a party to a random group of people.

Through our friend Scott Wiener of Scott’s Pizza Tours we were connected to Joseph Riggio of New York Pizza Suprema. We pitched the concept to Joe, and he graciously hooked us up with free pizza and employee uniforms. I lived a block away from Pizza Suprema for 10 years. It’s awesome. Next time you’re in the Penn Station area give it a visit. 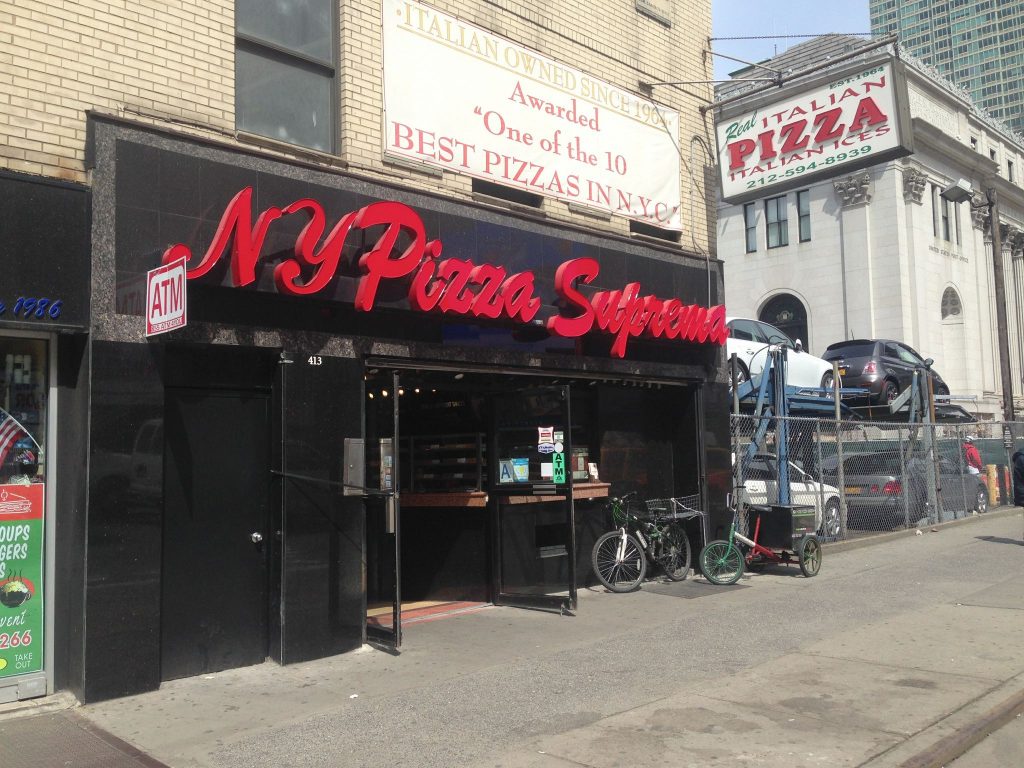 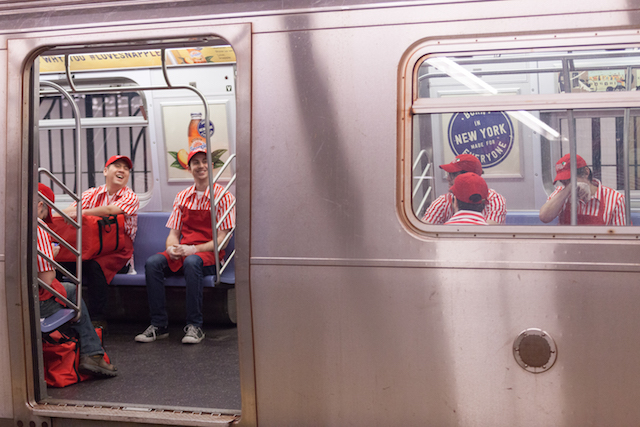 The Pizza Guys boarded the E train first and headed uptown where they got off at 23rd Street and waited. The guys were immediately attention getting due to their awesome Suprema uniforms. The rest of the cast and crew boarded the following train and headed up their way. 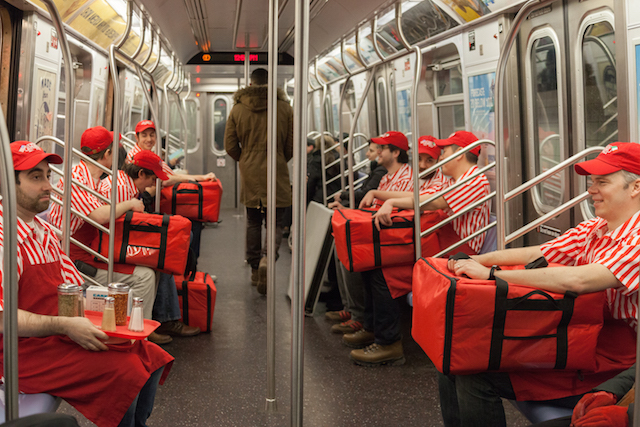 The Pizza Guys ride the train up to get in position at 23rd Street
Agent Ryan Karels played the MTA official, and I played his assistant. You might remember Ryan as the bartender from our 1860s Bar project. Ryan got the attention of everyone on the train and announced the good news. The initial idea of having a pizza party on the train came from I guy I know through UCB Theatre named Nick Assunto. I was brainstorming how to bring this idea to life with the Deverge guys, and we starting thinking about where and why pizza parties happen. They’re usually a reward for good behavior for a middle school class or kids sports team or something like that. So we figured our pizza party needed to be some kind of reward. 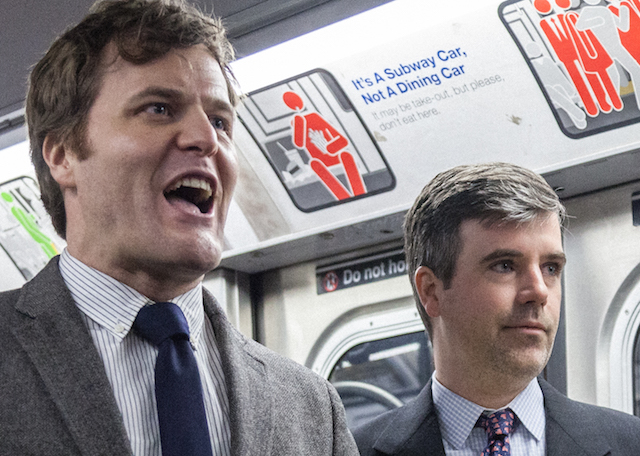 The MTA has launched a really big “courtesy counts” campaign in the past year, encouraging good etiquette on the train. We thought it would be funny to reward one car with a pizza party for being the “most courteous.” It’s absurd to think that the MTA could actually determine which individual car would win this, or that a given subway car actually has the exact same ridership day in and day out. Agent Karels was very specific in his full speech, to make this outlandish idea as believable as possible. “I am pleased to announce that this car, car #10 on the uptown E-train, departing Canal Street at 12:07 PM, is the MOST courteous car in the system.

You’ll notice that the courtesy ad campaign was coincidentally displayed on the car we picked in the photo above. One of the ads asks people not to eat on the train, so it was doubly ridiculous that we were passing out hot food for people to eat to celebrate their subway etiquette. Although, as we all learned in school, if you bring enough for everyone, it’s not as rude. We brought enough. 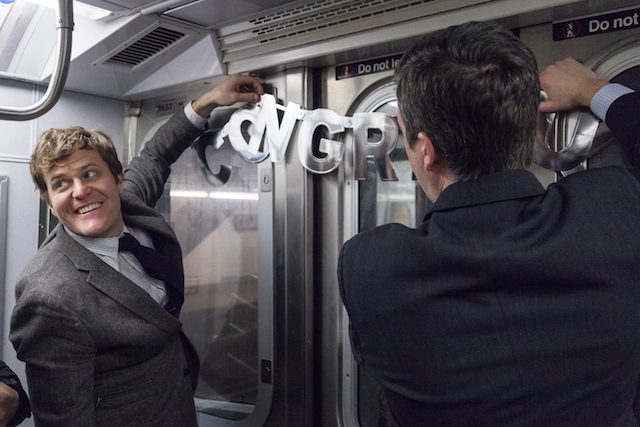 Agent Karels and I hung a “congratulations” banner on the train after our initial speech. The crowd was pretty skeptical. People were smiling and laughing at what we were saying, but I’m not sure they believed me when I announced that a local pizzeria would be delivering pizza at the next stop. 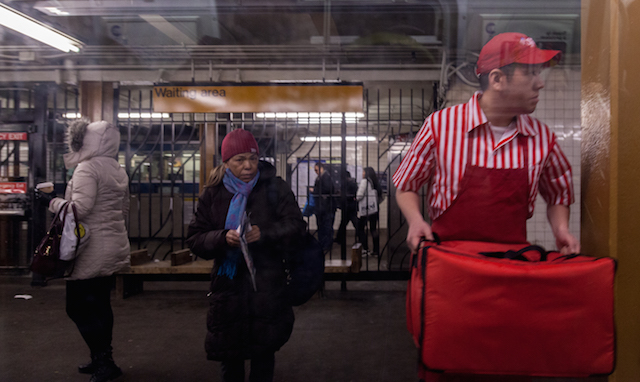 Agent Will Choy waiting on the platform
The train pulled into 23rd Street and we had our pizza guys lined up directly in front of the four doors of the train. There was an audible gasp in the car when people saw them out the window. One guy was particularly impressed; you can hear him in the video shout, “Oh wow! Look at that!” 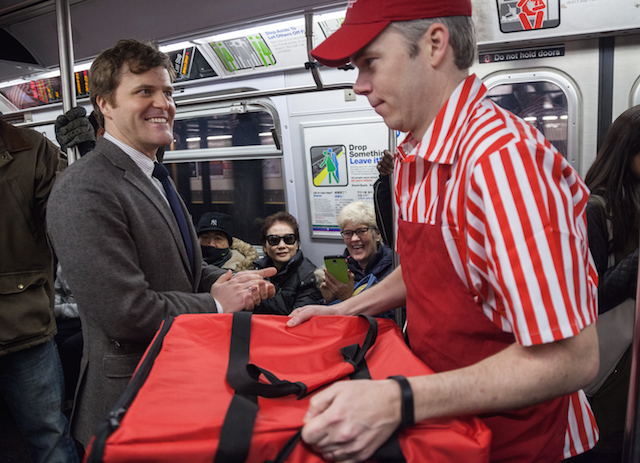 Passengers clapping as Agent Sean Taylor enters with a warming bag full of pizzas
We also brought a big table on board to serve as our pizza command center. And of course we brought a big trash can to help clean everything up. Courtesy counts! 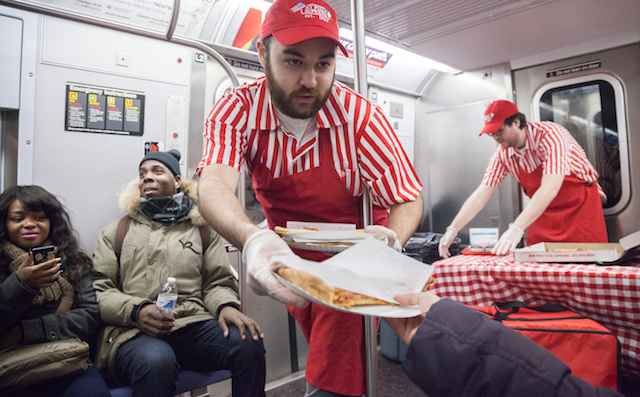 Agent Chris Polansky passes out a slice
Joe from Pizza Suprema gave us lots of pro pizza pointers that really helped out– little details like making sure we had wax paper on top of the paper plates, which keeps the grease from soaking through the plates. He also devised a division of labor strategy that was really efficient. Some of the pizza guys would hold the box, some would be in charge of plates and wax paper, and others would do the handing out. 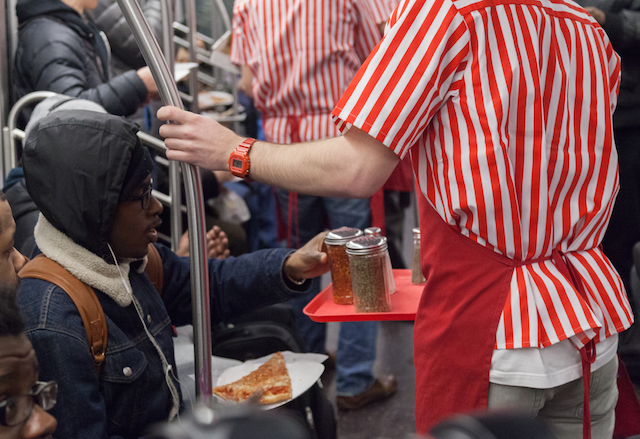 We also had a condiment tray that made the rounds. But wait, wouldn’t this stuff fall off the tray and spill everywhere? 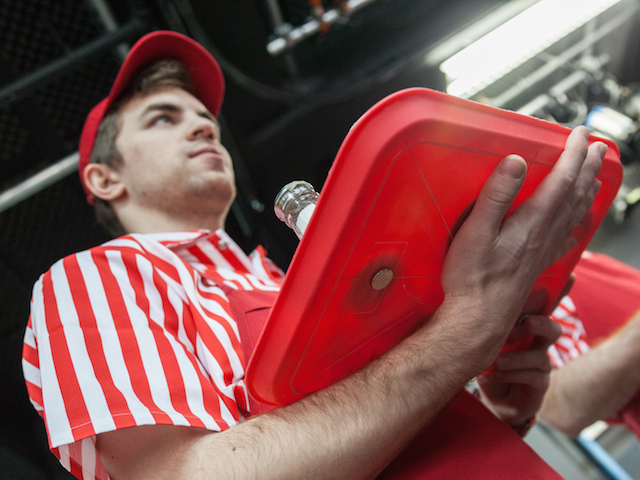 Not if you custom-fit each dispenser with a magnet and glue a corresponding magnet to the bottom of the tray! 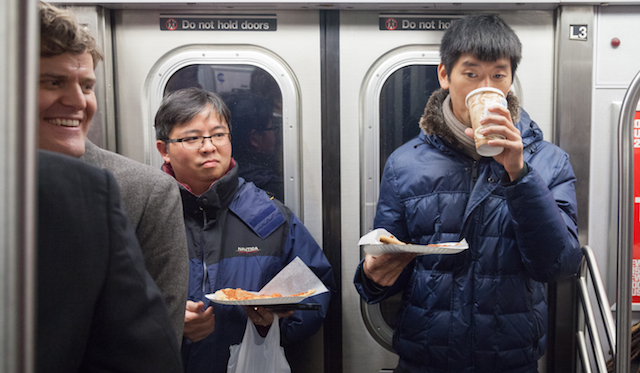 Once the pizza starting getting passed out the mood on the train was great. Everyone was having fun and enjoying good, free pizza. 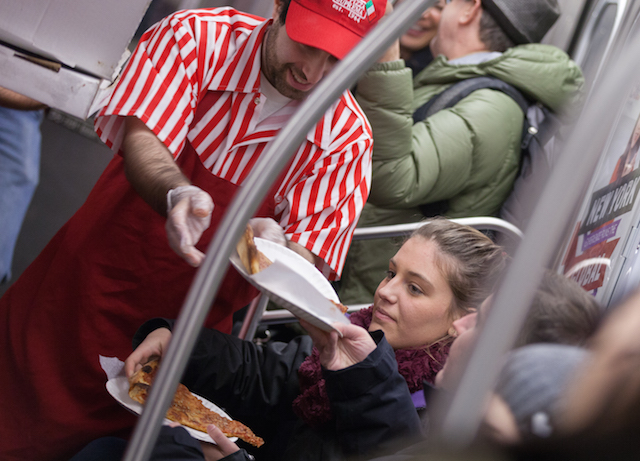 I think this is the first time we’ve passed out food on the subway since 2002’s Surprise! mission. 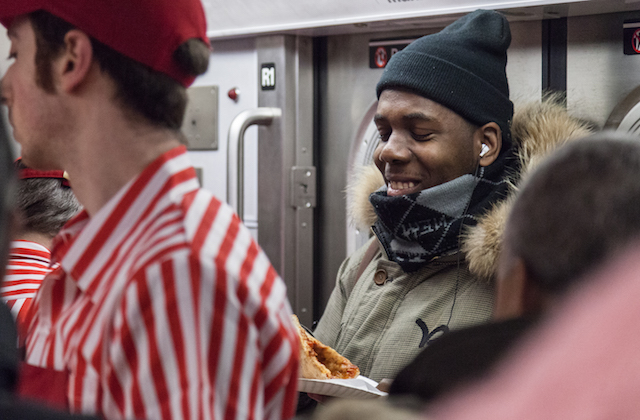 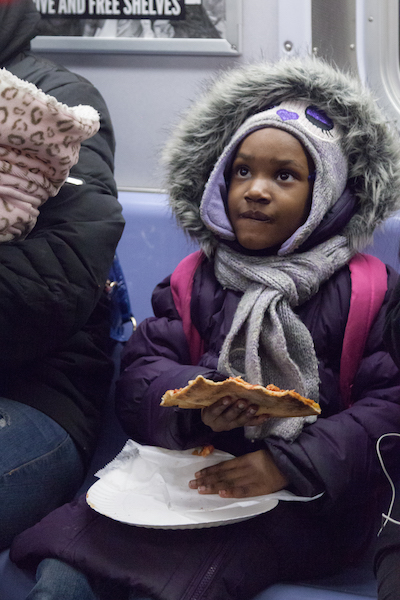 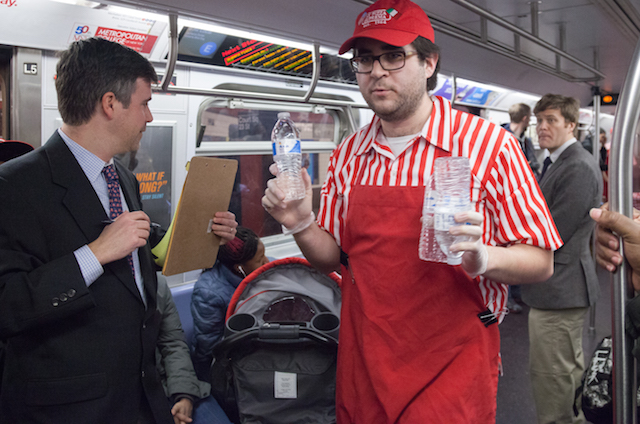 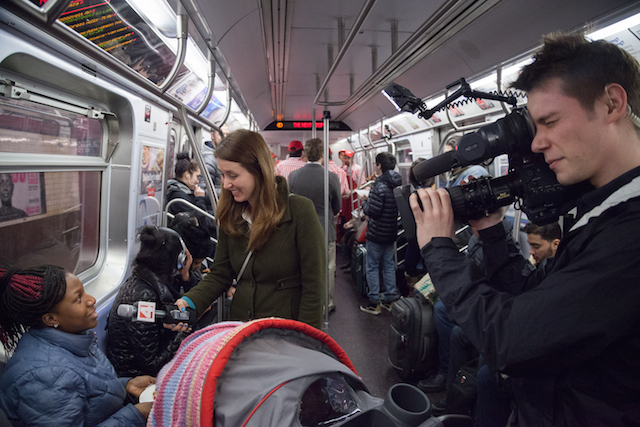 After a few stops, Agent Cody Lindquist entered posing as a local TV news reporter. She interviewed passengers about their good behavior as Agent Justin Ayers filmed her with a big ENG camera. Most folks took the premise at face value and were happy to offer pointers for other, less courtesy cars on how they can improve. 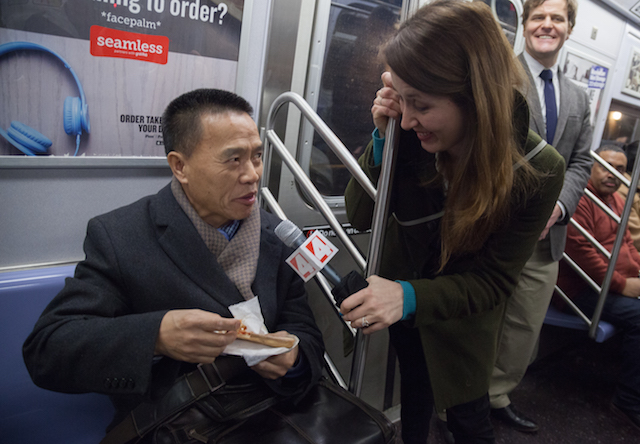 Of course the point wasn’t really about fooling anyone into believing our premise– it was just about giving everyone a fun time. Cody also played a news reporter in our Black Friday Dollar Store mission. 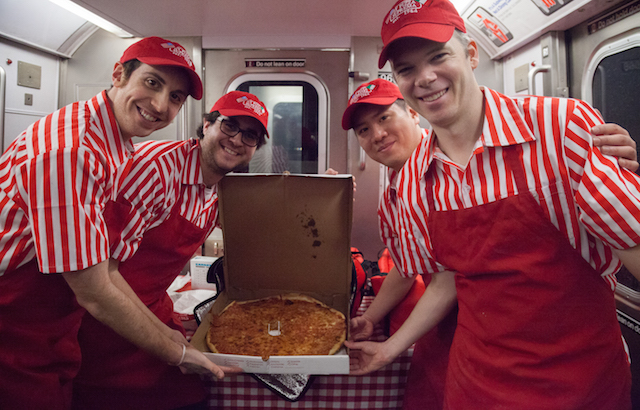 And how can you not have a fun time when free pizza is being passed out? 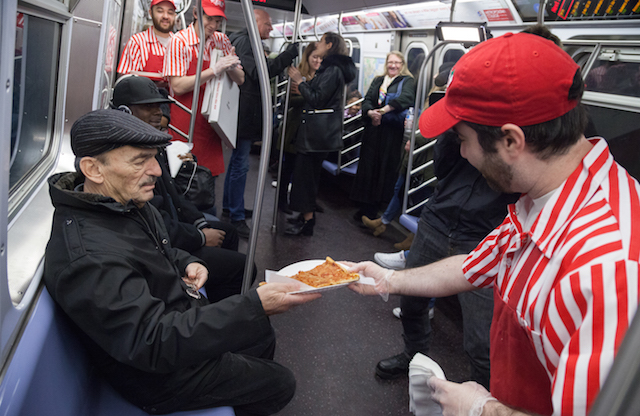 The guy in the photo above had the honor of receiving the very last slice. 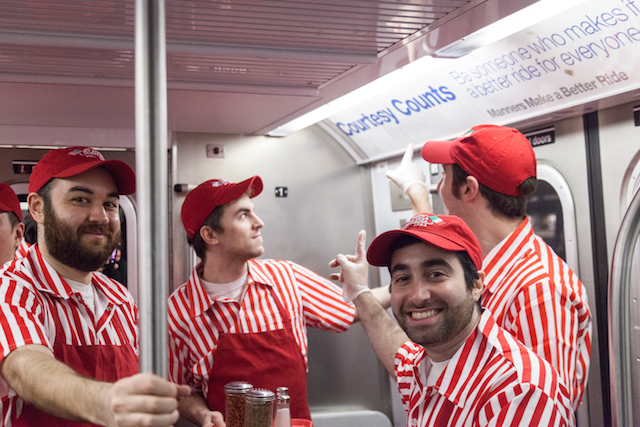 We staged the surprise four times in four different subway cars over the course of a couple of hours. Incredibly, 3 of the 4 cars we chose had the MTA “Courtesy Counts” ad campaign. Thanks to everyone who helped out as a pizza guy! 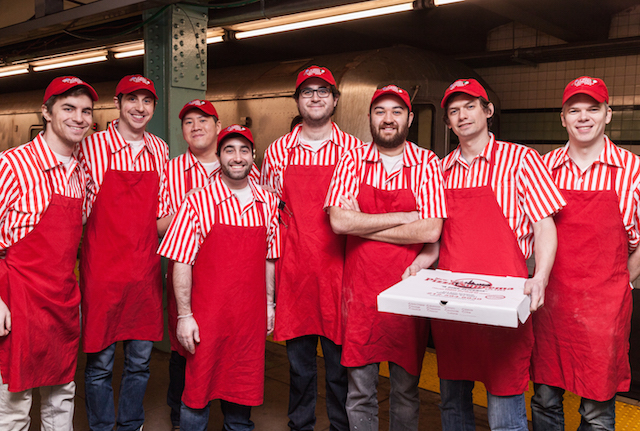