For our latest mission, 30 people throw a birthday party for a random stranger in a bar. The mission was filmed with cameras hidden behind two way mirrors, and the audio comes from hidden wireless microphones (both on our agents and hidden around the bar.) Watch the video first, and then check out our behind-the-scenes report.

This mission is a remake of the original Ted’s Birthday mission from 2003. Back then we had no access to hidden video camera equipment, so we decided not to film the mission. It just wouldn’t work with an exposed camera. We figured as soon as “Ted” saw people filming, the moment would be ruined. So for the original mission only a handful of photos exist to document it. Years later when we were working on a television pilot, we had a budget to work with professional equipment and decided to give this idea another shot. 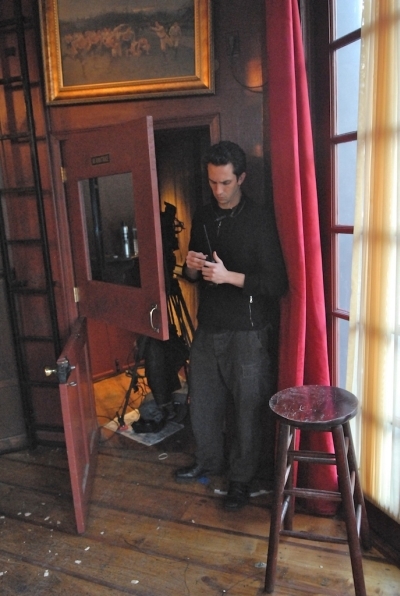 A newly installed two way mirror in a closet door
The morning before the mission, our crew made some serious modifications to the Gaslight Bar in Manhattan. 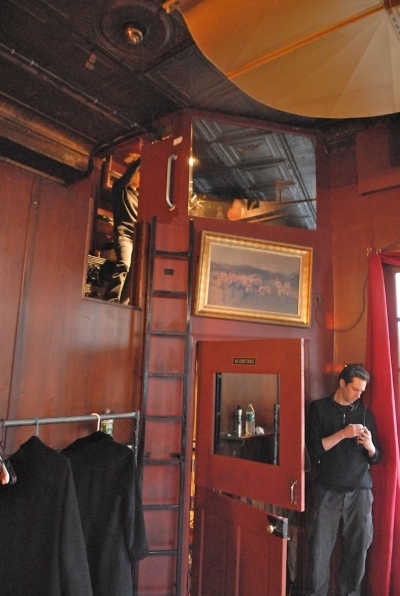 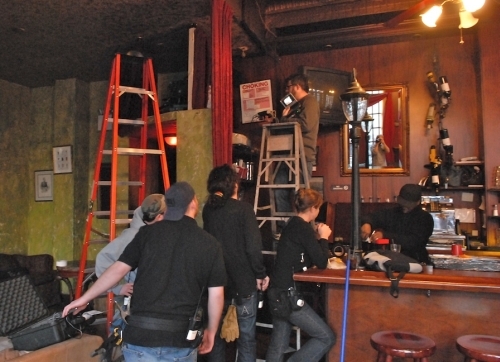 A video monitor is installed for the cameraman who will be hiding up high
The Gaslight bar had a second, private bar attached to it called G2, and we were able to rent it out and set up our production there. 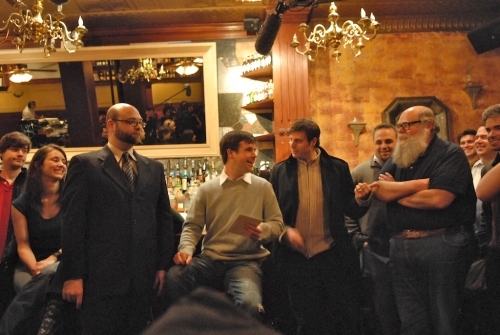 Explaining the mission to the agents
The mission plan was the same as the original Ted’s Birthday. I had emailed all of the agents a back story for a fictional guy named “Ted” that included basic information about where he worked, where he went to college, and what his hobbies were. The agents were instructed to make their own personal choices about how they knew him. Some chose to be his work friends, some chose to be his family members, and Agent Reeves chose to be his ex-girlfriend. 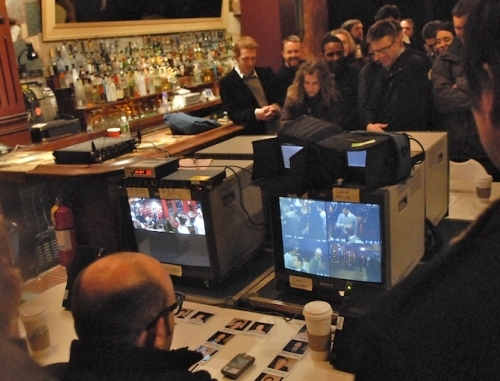 The mission begins, as Agent Carbone watches the monitors
Agent Rodgers and I chose to play the role of “Ted’s college buddies,” and we had the task of starting the mission. As the cast and crew looked on from the video monitors at G2, we entered Gaslight and approached a random stranger who was sitting with a friend at the bar. Agent Rodgers and I greeted “Ted” and apologized for being a little early to his party. His friend informed us that we had the wrong guy, that “Ted” was actually Chris (coincidentally the same name as the guy we picked from the first Ted’s Birthday.) We just laughed it off and acted like the friend was the one who was misinformed and left them to go get a drink. 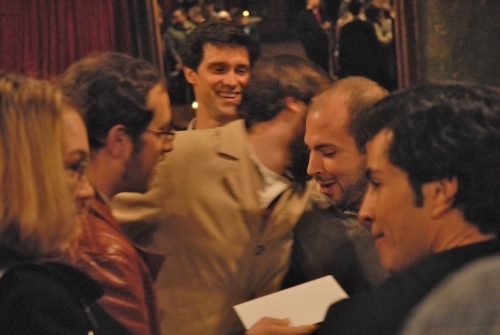 Agent Barrison gives Ted a gift
Other agents started entering the bar pretty quickly. The first bunch to arrive were Ted’s work friends, with Agent Fountain playing his boss. Everyone had a card and a present for him. Most folks gave him gift cards, but a few had more personalized gifts. 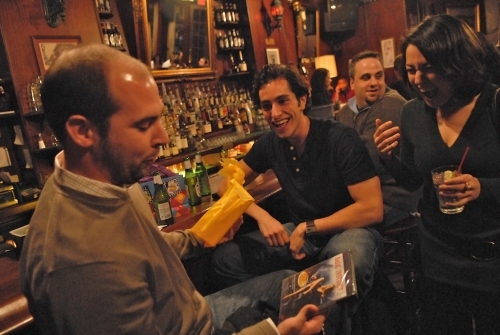 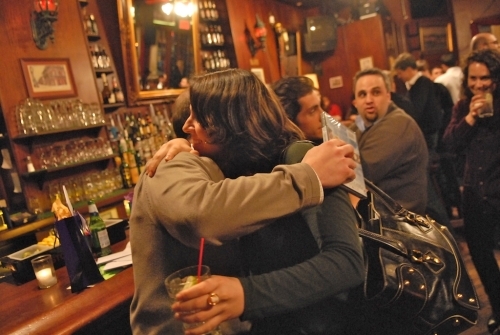 Ted gave her a hug anyway
Though certainly confused as to what was going on, Ted very quickly decided to play along and have fun. Why not? He was getting a new present every few minutes and Agent Good started a tab for him. 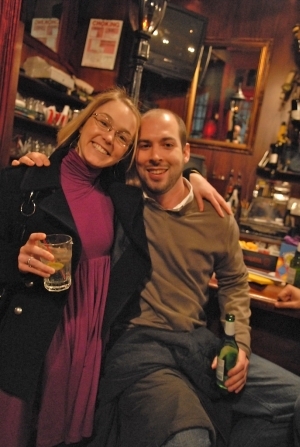 Agent Fairey poses with Ted
More and more party-goers started asking Ted about his ex-girlfriend Lauren, and if he knew if she was going to make it. Everyone was shocked to see her name on the “e-vite” since he had recently broken up with her. 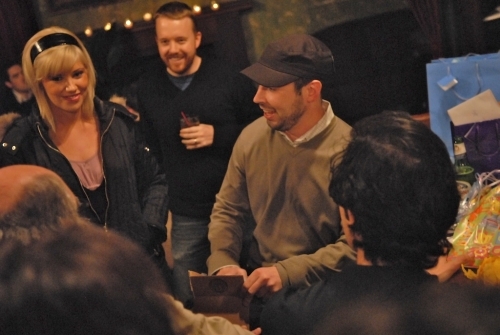 Agent Reeves and Ted
Lauren, played by Agent Reeves, finally arrived and Ted was very friendly to his ex. She gave him a hat for his birthday and they chatted politely. 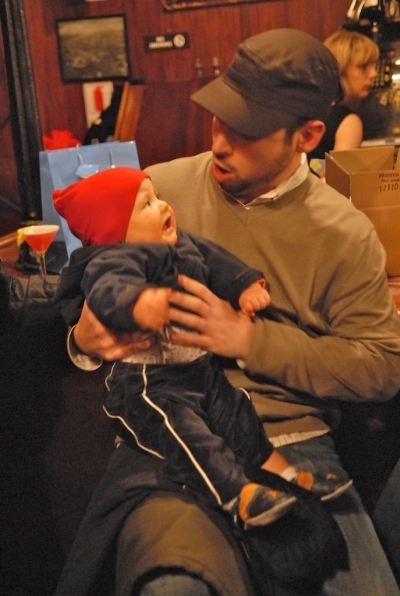 Agent Kaz and Ted
Agents Rose and Keech brought their 10-month old son to the party. They were excited for their friend Ted to get to hold him for the first time. Kaz was a little scared of Ted at first. 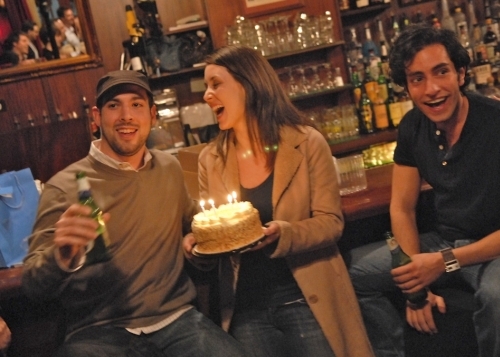 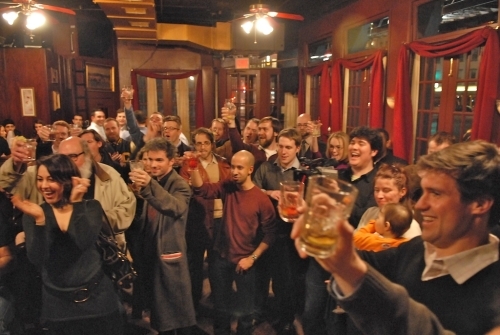 A birthday toast for Ted 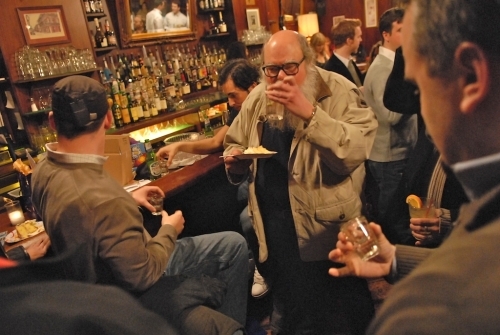 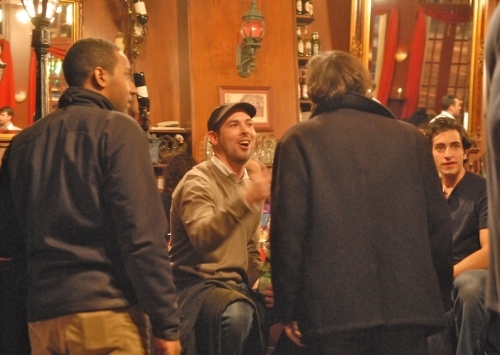 Agents Purnell and Arnheiter say goodbye
After about an hour, agents started leaving the party one by one, saying goodbye to Ted on the way out. 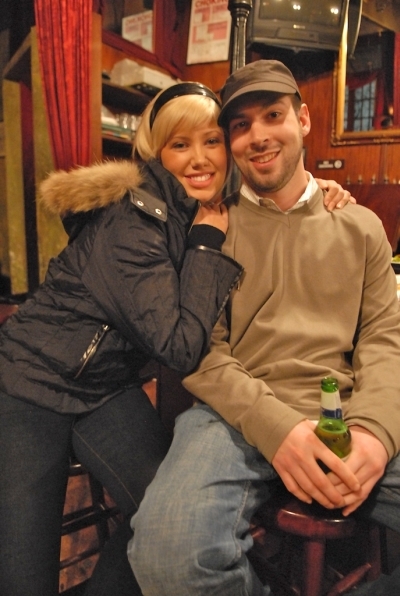 Agent Nicholson snapped one last photo of Ted and Lauren before he left as well
Lauren was the last to leave the party, giving her some alone time with Ted. Ted played along hilariously and the two ended up having a very tender scene together, even though they had obviously never met. She then told him goodbye and left Ted alone to discuss what the hell had just happened with his (real) friend.

Over a year later I ended up running into Ted (real name Chris Conway) at the Upright Citizens Brigade Theatre in the middle of the night during an improv marathon. As it turns out, he’s a comedian himself. Small world.

Since this mission was for a TV pilot, we ended up doing it two more times on the same night. (When you’ve spent money on all that equipment, you have to make sure you get the footage you need!) The second two were both successful, but the footage wasn’t quite as good as the first try. 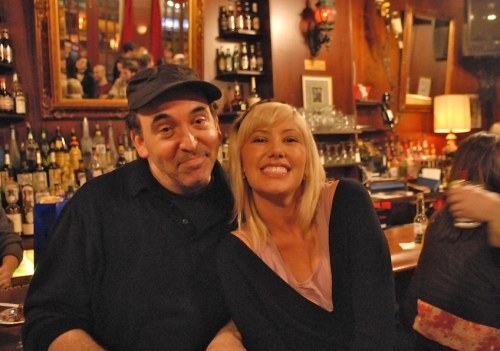 Ted #2
We staged the mission for the second guy about an hour later (long after the first Ted had left the bar.) The guy we picked had lots of fun, but we probably shouldn’t have picked someone 10 to 15 years older than most of us. It made it a little too unbelievable. 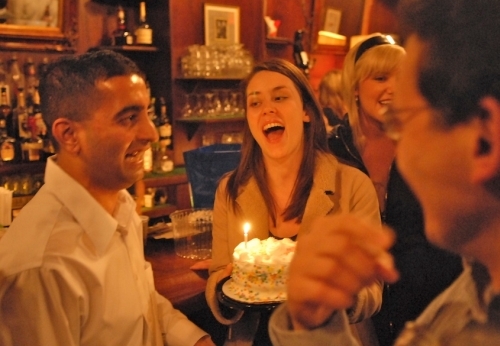 Ted #3
The third Ted was a guy named Mandar, who as it turned out was a regular at the Gaslight bar. His party went incredibly well. In fact, it went so well that the video footage seemed fake. He was just too excited and agreeable about the whole thing. Mandar was known around the bar as someone who often broke out into a dance (even though the bar was definitely not a dance club.) Midway through his birthday party he did just that. 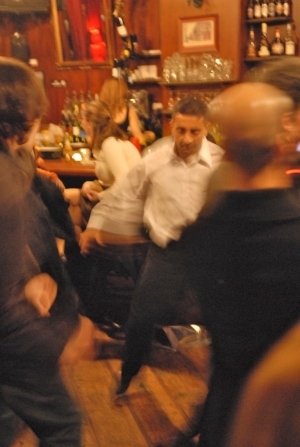 Our agents joined him and the bar was temporarily converted into a dance party. It was ridiculous.

It was a new experience for us doing the same mission three times in a row. We were exhausted by the end, but it was a ton of fun. 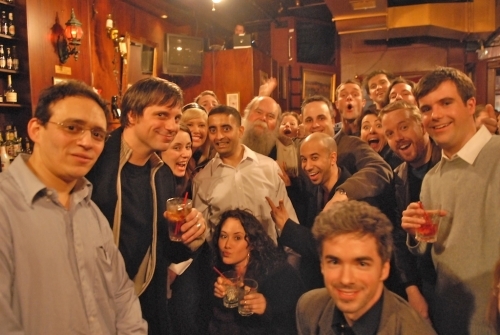 It was exciting to get another chance to do this mission, as the first one from 2003 was covered by This American Life in a very negative way. While that mission itself was a total blast, and it seemed like the “Ted” that we picked had a great time (hugging us goodbye and thanking us at the end of the party), he told This American Life a year later that the experience had upset him greatly. In the end, I think we just got unlucky and picked the wrong person. This American Life did not give me an opportunity to respond to the news that “Ted” did not enjoy the experience and instead edited in an earlier interview with me that made it seem like I was heartless and unapologetic. For the record, of course I was upset to learn that he had a negative reaction to the mission. You can read a little more about my thoughts on the TAL coverage on a Reddit Q&A I did here and here.

Admittedly, this mission was a little bit different than the first Ted’s Birthday, so it’s not entirely fair to compare them. Since this was for television, we had to get all three Teds to sign a release form when it was over, which let them in on the joke. I really didn’t like having to break character for an IE mission, but the fact is you need someone’s permission to put them on primetime television. So the Teds from this mission didn’t have quite the same experience as the original Ted, who was never told exactly who we were.