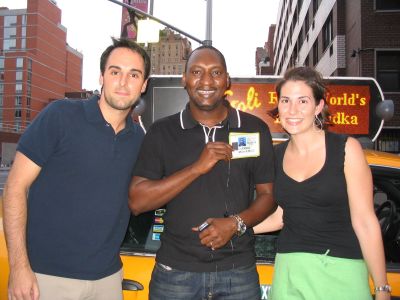 Lately I’ve been very interested in the idea of pulling off a mission that involves multiple agents taking the same cab consecutively. If we came up with a detailed plan for the drop off points, we should be able to ensure that a cab driver picks up a series of agents, without realizing that they are connected. There are endless possibilities with this device, but in keeping with Improv Everywhere’s philosophy, I decided to stage a very simple mission with the goal of giving the cab driver a wonderfully happy experience, straight out of a romantic comedy.
At around 7:00 PM, the three of us reported to our designated street corners. 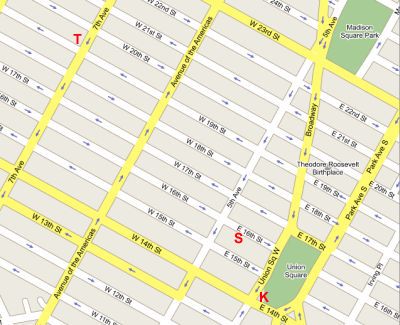 We used two DV cameras. One was operated by Agent Kula across the street from McManus. The other started with Agent King and was passed from passenger to passenger in the back of the cab, to pick up audio from the cab driver. Additionally, we had Agent Becket stationed at McManus with a still camera. 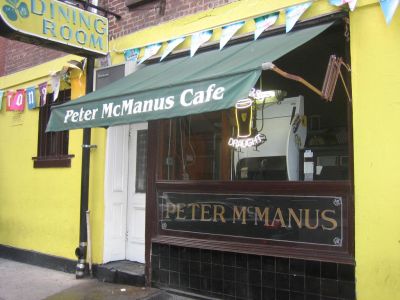 Agent King would go first. He had the task of hailing a cab with a good driver. A good driver for us would be someone who spoke English well, and wasn’t talking on his phone (which almost all cab drivers are). He would then explain his situation to the cabbie: He met a beautiful girl named Kate in the bar McManus the night before. They talked for hours, and he really fell for her. At the end of the night, she wrote down her number and the address of a restaurant where they would meet the following night at 7:00 PM. He was drunk, and foolishly lost the cocktail napkin she had written everything on. He had been walking around the Union Square area all night trying to find the place. He could remember the neighborhood, but nothing more. He would say it was driving him crazy thinking of Kate waiting alone at a restaurant, thinking she had been stood up. Agent King would then ask the cabbie to take him to McManus. He knows Kate is a regular there as it’s near her apartment; maybe she would show up there at some point in the evening.

At McManus, Agent Todd would hail the same cab. He would simply tell the cabbie “16th and 5th”. He wouldn’t say another word until the cabbie dropped him off in front of the Chat ‘n’ Chew restaurant. There, Agent Spencer would hail the cab and ask to be taken home to 8th and 20th. She would complain to the cabbie that she had just been stood up by a guy she met at a bar the night before.

Would the cabbie make the connection? Would he save the day?

I got in the cab a little after 7pm. I had spotted him at the corner of Union Square West and 14th Street. He had his window down, so I asked him if he could make a right turn. He said, “Hurry up!” Then just as I got in, he started screaming at people walking in front of him.

I figured I was going to have to try with a different, less angry cabbie. But I launched into my sob story about missing my date and he perked right up. And was actually really nice. I asked him where some good restaurants were and he said, ‘There are a lot on 16th street’ – which is where Agent Spencer would be waiting for him. I told him I had already checked there and had no luck. He was very interested in what she looked like. When I said she was tall, he said, “Oh! She was tall? Nice.” And I said, “Yeah, she was perfect!”

He also told me I should have saved her phone number in my cell phone. Which is very true.

Agent Todd got right in the cab as I got out at McManus – and I waited… for a long, long time.

When he dropped me off, I was pretty sure that if this guy didn’t bite we weren’t going to find anyone who would actually take Agent Spencer to McManus to meet me. He seemed totally on board. 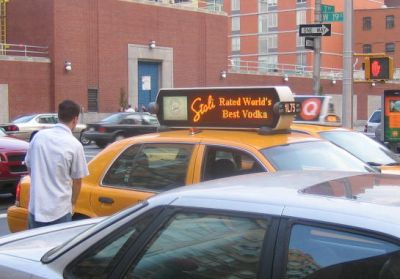 The cab pulls up to McManus 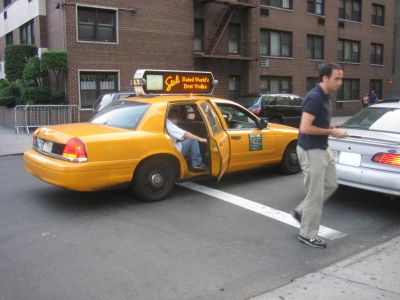 Agent Todd gets in and Agent King gets out
Agent Todd

My ride was pretty uneventful, as planned. I had no idea how it had gone with Agent King. I asked to be taken to 16th and 5th, and sat silently in the back. I sent Agent Spencer a text message letting her know I was on the way. Disaster nearly struck when the cabbie took a wrong turn. He forgot to turn on 5th Avenue. He tried to get me to leave the cab at Union Square West and 16th, but I knew I had to get out directly in front on Agent Spencer in the middle of the block. I insisted that he go around the block, which irritated him because it meant going all the way to 6th Avenue due to the one-way streets. It added an additional ten minutes to the trip, when I could have walked 30 seconds instead. He was talking on his phone the whole time in another language. I was worried that he hadn’t paid any attention to Agent King. I also thought that perhaps the extra time this detour was adding would make the whole thing more believable. It gave him more space between his two star-crossed passengers.

He finally made it to 16th Street and I had him drop me off right in front of Agent Spencer, who was standing right there in front of the Chat ‘n’ Chew hailing him. I apologizing for making him go around the block and admitted, “It was stupid”. He apologized for making the wrong turn. I paid and walked into the restaurant.

When Agent Todd first told me of the plan for the mission, I wasn’t convinced it would work. Do cabbies ever listen to what you say to them. Half the time I can’t even get them to take me to the right address, they’re so busy chatting into their cell phones. On Friday night Agent King and I dressed like we were going out on a date, grabbed our respective cameras, and headed down to the Union Square area to get in position.

I took my spot outside of Chat n’ Chew and Agent King headed to wherever he was going. I paced back and forth on 16th street waiting anxiously. It wasn’t long after that I got a call from Agent King alerting me that Agent Todd was now in the cab and that the cabbie had responded well. Agent King told me he had told the cabbie how we had met at McManus, totally clicked, and I had written down on a napkin where to meet him for dinner the following night and he had lost the napkin and couldn’t find the place. It sounded good to me and easy to extrapolate on.

At 7:28 PM I got a text message from Agent Todd: “In cab. Will call when close.” Thinking he was nearby I sprung into action, standing in the street ready to hail “our cab.” It took him about 20 minutes to get down to me. When he did we made the switch easily, I hopped in the cab and immediately asked the cabbie how his day had been going. I informed him that I had been stood up by a guy I had met last night and he immediately asked me where we had met. When I told him, he reacted immediately, “I just dropped him off!” he exclaimed. We bantered for a while and I kept pressing him with questions to “make sure” it was the right guy. He was insistent; he had listened to everything Anthony had said, and even asked me how tall I was, when I responded “5’9″, very tall”, he said “It’s definitely the guy, you’re just his type, he likes tall girls!”

As we got closer he was so sweet, he told me he was “hoping and praying for me that the guy is there.” He was absolutely positive that he knew my man, and without me even asking took me right to McManus.

Finally, I got a text message from Agent Spencer that said, ‘all good.’ 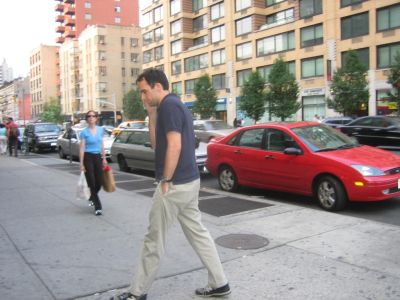 Agent King making a call in front of McManus
In a few minutes, as I pretended to talk on my cell phone, a cab pulled up honking. Agent Spencer jumped out and the cabbie was saying, “I have her! This is her!” 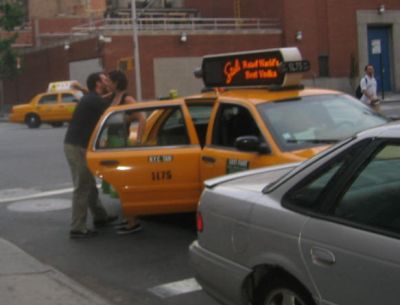 As we crossed 7th Ave on 19th street to the bar, we both got excited. “There he is!” I shouted.

He honked the horn. When I hopped out of the car he said something to Agent King like, “I got her! I got her!” His excitement was so sweet. 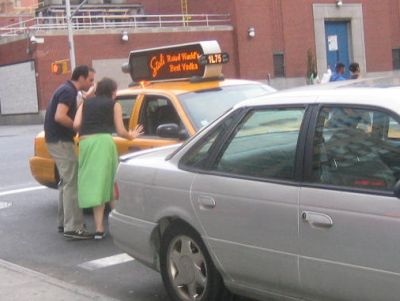 After Agent King and I embraced our cabbie readily agreed to take a picture with us, in which he proudly displayed his Taxi Medallion. I tipped him 40% and he went on his way he was truly a hero. 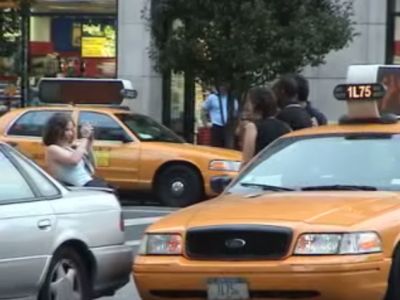 When Agent King got out of the cab, he seemed really confident that the cab driver was into his story and would take the bait. It was very suspenseful and exciting waiting for Agent Spencer to return in the cab, and the spectacle that ensued when they were finally reunited by the cabbie was heart-warming. The driver came through the light honking his horn and flashing his lights and there was much shouting and laughter as Agent Spencer hopped out and hugged Agent King. Once I had snapped a few pics and snuck the camera back into my bag, I tried to look surprised and confused at the all the commotion. The happy couple spotted me and asked if I could take a picture of them and the cab driver, who’d gotten out and come around the cab holding his big driver ID cards and smiling. “What happened?” I asked, as I took a picture of the happy couple and their driver. “We’ll tell you later!” Agent Spencer shouted, still seemingly flustered over the incredible stroke of good fortune and coincidence she’d just experienced. After some heavy tipping and sincere thank-yous, the driver got back in his ride and drove away.

He was really excited and we were screaming and hugging. As he left, we kept it going, just in case he glanced back in his rearview mirror and saw us. It was really awesome to see him so happy about us being so happy. 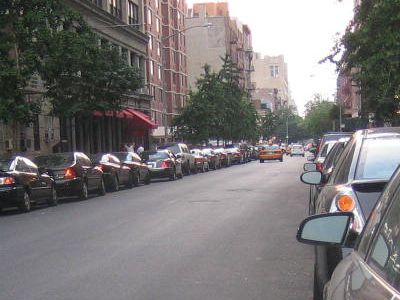 Our cabbie drives away

Using a video camera hidden in a bag in the back seat of the cab, we were able to record an mp3 of the conversation between Agent Spencer and the cabbie. Listen to it Here.