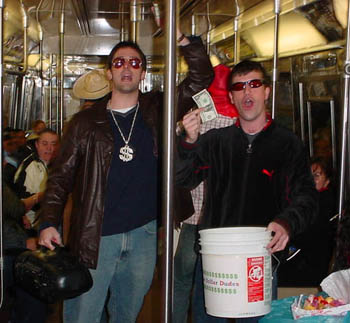 One of the main goals of Improv Everywhere is to add excitement and happiness to otherwise dreary routines. It’s not an easy task. We’re constantly amazed at things people are somehow able to ignore and the lengths they go to avoid connection with those around them. How someone could continue to bury their nose in a book while surrounded by seven pantless men on the train? How could someone notice a table offering free liquor drinks on a college campus and not stop to check it out?

With this is in mind, we designed the Dollar Dudes mission. Surely there was no way anyone could ignore free money. Right?

The Dollar Dudes (Agent King and Agent Todd) boarded a Brooklyn-bound “Q” train at the Canal Street station (the train provided them with a 12 minute non-stop stretch of time as it traveled over the Manhattan bridge). Agent King wore a leather jacket, a dollar sign necklace, and carried a boombox. Agent Todd wore a black Puma jacket and carried a large plastic bucket filled with seventy $1 bills. The Dollar Dudes both wore sunglasses. 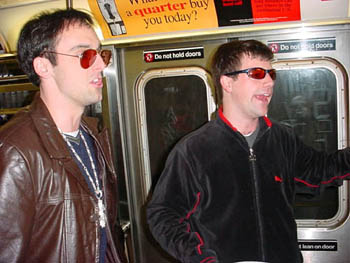 As the doors shut, Agent King hit play and began blasting Calloway’s “I Wanna Be Rich”. Agent Todd took a fist full of dollars, held them above his head, and began to shout, “Listen up everybody! Today is your lucky day! This train has been picked to be the Dollar Train! We’re the Dollar Dudes! We’ve got a bucket full of dollars and today everyone gets one!” 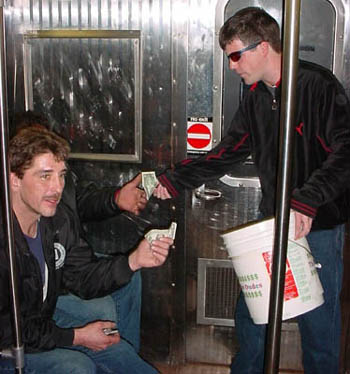 While some passengers were instantly smiling and excited about their luck, many were skeptical at first. “What’s the catch?” people began to ask. “The catch is ‘fun’,” Agent Todd would reply. Some passengers began holding their dollar bills to the light checking if they were legitimate. Shockingly, several people refused to take a dollar. Most did this in a polite way saying “no thank you”, etc., but one man was quite rude about it:

Agent Todd: (waving dollar bill in old man’s face) Sir, would you like a dollar?
Old Man: (venomously) Does it LOOK like I want a dollar?

Agent Todd: Who else wants a dollar!? 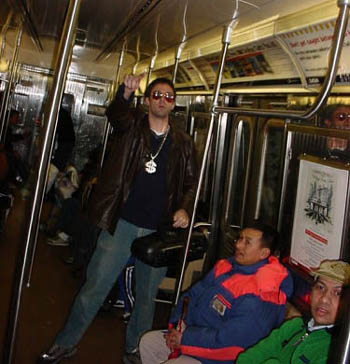 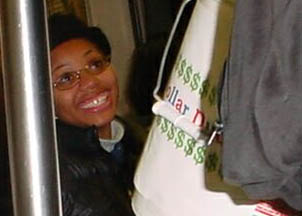 Agent Sklaren recalls the scene; “The people sitting around me were pretty skeptical about the Dollar Dudes, until Agent Amigone and I realized that the little boy sitting across from us really wanted a dollar. We started chanting `Give the kid a dollar!’ The Dollar Dudes walked over and gave the little boy a George Washington. His face lit up. He then looked at his mom and asked `Can I keep it?’ His mom nodded and the kid starting clapping his hands. That gesture won over most of the non-believers, although some of them still held up their dollars to the light to check and see if they were counterfeit.” 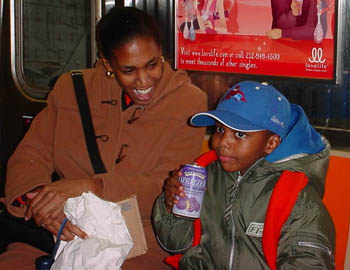 The Dollar Train really got kicking when out of nowhere Los Hombres Del Peso [sic] entered the car. Los Hombres (Agents Kula and Keech) carried a boombox playing a Mexican beat and a bucket full of 20 Peso bills (worth about $2.50 each). Agent Keech sported a tiny sombrero with the word “Mexico” proudly stitched on the front. Agent Kula wore a hip, red “doo rag”. 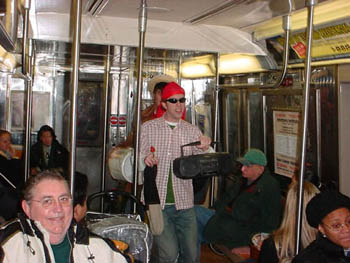 Los Hombres began passing out 20 Peso bills to anyone who would take them and turned the train into a battleground for currency supremacy. They begin to attempt to lead the crowd in chants of “Peso! Peso!” The Dollar Dudes, insulted that someone else was on their turf, fought back with chants of “Dollar! Dollar!” 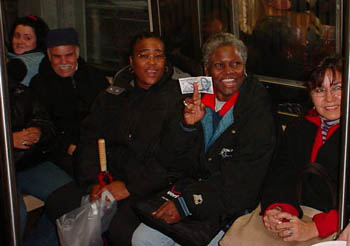 The rivalry reaching a boiling point when Agent Todd announced he would give anyone an extra dollar if they traded in their peso. The ploy worked, and nearly all of the pesos were returned for dollars to the giant dismay of Los Hombres. 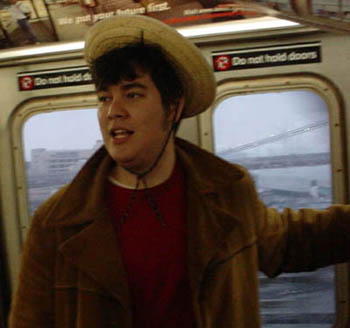 Agent Kula recalls, “There was an older black lady who was a big supporter of Los Hombres del Pesos: she joined in on all our chants of “Peso! Peso!” and at some point just decided to take over leading the chants herself. When everyone else on the train was trading in their pesos for dollars, she just kept on waving her peso, supporting Los Hombres. I gave her a rose, and she kissed me on the cheek.” 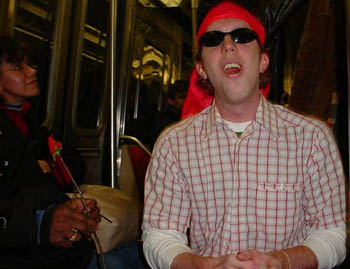 Kula continues, “We got a big reaction when the little boy asked us for a peso and then immediately traded it for a dollar. Agent Keech and I acted like we’d been shot, and the train riders loved it — they were big fans of seeing Los Hombres in agony.” 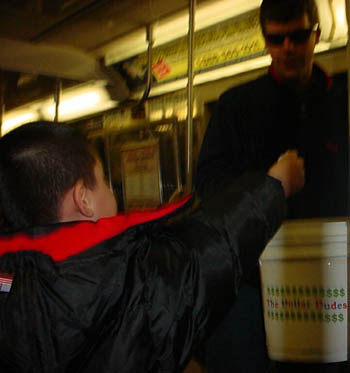 Agent Keech fought back by grabbing a dollar out of Agent Todd’s bucket and then ripping it up right in front of his face. This led to a climatic stare down between the groups, but in the end the competition was friendly and in good spirit. 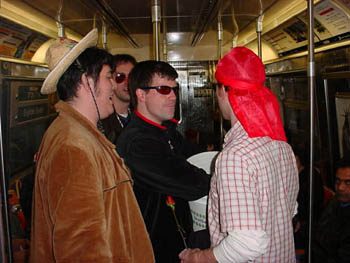 The train finally pulled into the Dekalb Avenue station in Brooklyn and it was time for the Dollar Dudes and Los Hombres to say goodbye. Passengers smiled and waved goodbye as the train rolled on. 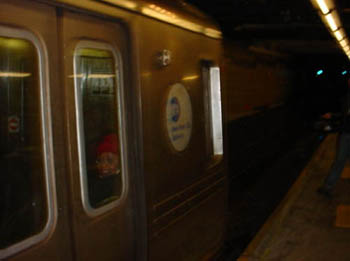 With the exception of one crabby old man, a good time was had by all. Sure, more than a few people declined to take their free dollar, but they certainly couldn’t ignore what was happening. After all, we all want money. Lots and lots of money. We want the pie in the sky. 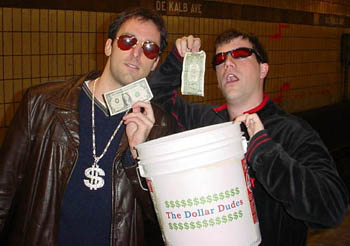 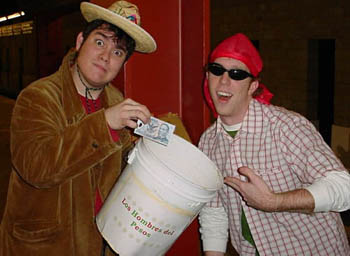 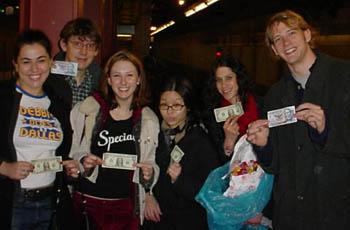