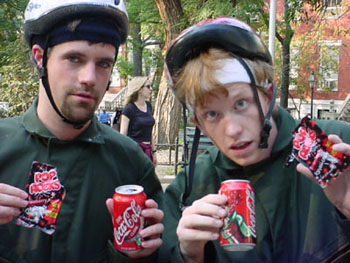 Causing a scene sometimes just involves putting on a damn good show. The Amazing Stuntmen strive to do just that. On Saturday, September 14 the Ohio based duo and their manager touched down in Washington Square Park to give New Yorkers a taste of their thrilling act.

The Amazing Stuntmen (Agents Gethard and Todd) picked a quiet corner of the park and began to warm up while their manager (Agent King) wrangled together a crowd. The stuntmen were decked out in green jump suits, head bands, and safety helmets. 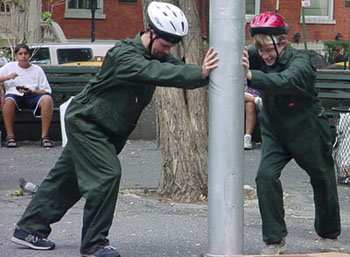 Six other Improv Everywhere Agents had entered the park independently of the stuntmen. They stopped to watch the show, which encouraged crowds of “real” strangers to stop as well. Agent King began the hype, “Ladies and Gentlemen, what you are about to see is a series of breath-taking stunts performed by The Amazing Stuntmen. These men have traveled all the way from Chagrin, Ohio to risk their lives before you today.” 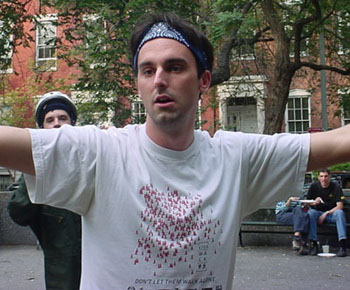 King reached into his prop box and produced two pairs of scissors. He gave the crowd an up close look at them, “As you can see these are very real scissors with deadly sharp edges.” The stuntmen gave each other a hug, and exchanged a knowing glance of guarded confidence before hoisting the scissors over their head and running at top speed! 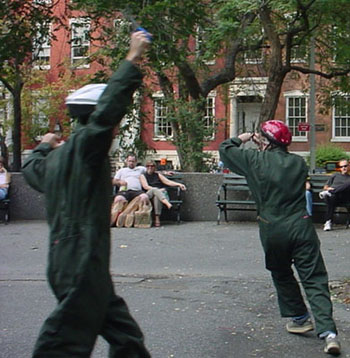 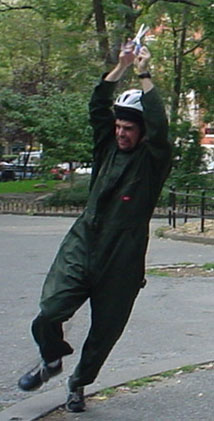 The Amazing Stuntmen frantically ran around in circles, screaming for their lives at the top of their lungs. Just when it looked like an injury was inevitable, they came together and gave their signature victory pose, signaling to the crowd that the stunt was complete and they were A-OK! 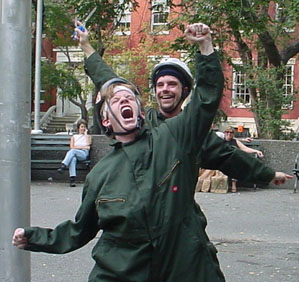 “They’re OK!”
The crowd began to pick up as children of all ages marveled at the strength, agility, balance, and bravery of The Amazing Stuntmen. 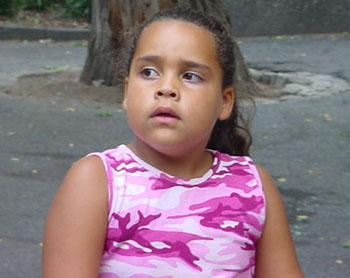 Stunt Number Two: Your Face Will Stick Like That

For their next stunt, stuntman Chris made an ugly face while stuntman Charlie prepared to slap him on the back. King announced, “Stuntman Chris is jeopardizing his physical appearance for the rest of his life. This man is willing to put his body in extreme danger for your entertainment.” Stuntman Charlie gave the slap and for one terrifying minute, Stuntman Chris was unable to un-stick his face! He motioned for Stuntman Charlie to slap him in the face in a desperate last ditch move. Stuntman Charlie complied, slapping him with full force across the cheek, and amazingly, the plan worked! His face returned to normal as Agent King shouted with joy, “He’s OK!” 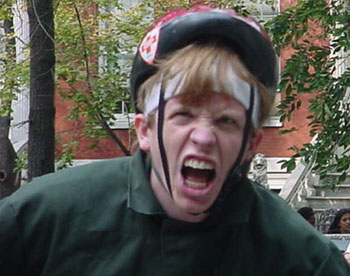 Agent King reached into the prop box and produced a portable television. He announced to the crowd that The Amazing Stuntmen were going to attempt to sit too close to the television for 30 full seconds. King brought the TV out into the audience to prove that it was a working, battery operated unit. He tuned in an NFL football game, and handed the television to the stuntmen. With intense bravery, they put their eyes mere inches away from the screen as King counted down the seconds. 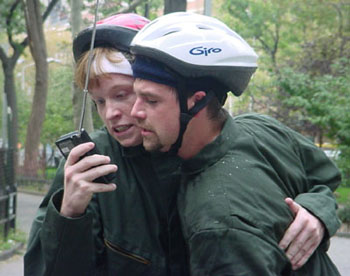 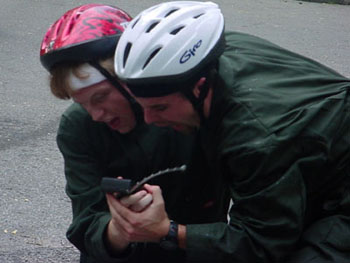 Both men fell to the ground, nearly breaking bones as they held on to the TV with all their might. The crowd was riveted! 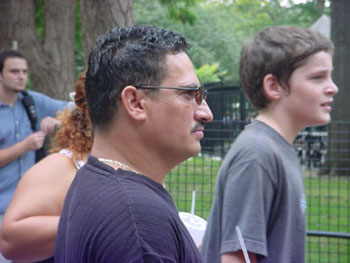 The 30 second count finally came to an end as both men covered their eyes and screamed in pain. They rose to their feet and somehow managed to strike the victory pose. “They’re OK!!”

Agent King asked the audience if their was anyone who had any candy on them. Agent Keech (playing a “crowd person”) raised his hand and reluctantly produced two strawberry Airheads candies. The Amazing Stuntmen slowly approached Keech, their eyes carefully sizing up the danger as they methodically grabbed the candy from his hands. They opened the candy and began to chew carefully as Agent King warned the audience, “Kids, DO NOT try this stunt yourself. These are trained professionals!” Over a minute later, the stuntmen swallowed the last bit of their Airheads and struck the victory pose! They were OK!! 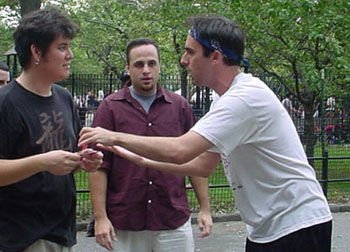 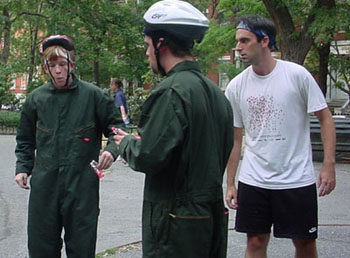 Agent King again reached into the box of props, this time producing a bagel. He handed it to stuntman Charlie and announced to the crowd that Charlie would eat the bagel and then go swimming WITHOUT WAITING THIRTY MINUTES! Stuntman Charlie took a single bite out of the raisin bagel and Stuntman Chris dowsed him with a full cup of water simulating the swimming experience! Although his face was covered with water and his belly was full of bagel, Stuntman Charlie managed to strike the victory pose! He was OK!!!!! 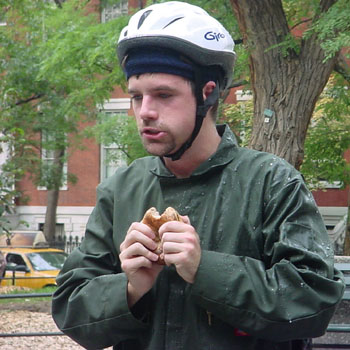 Members of the crowd gave a giant collective sigh of relief on Stuntman Charlie’s behalf. He had just risked cramping or even drowning before their very eyes! 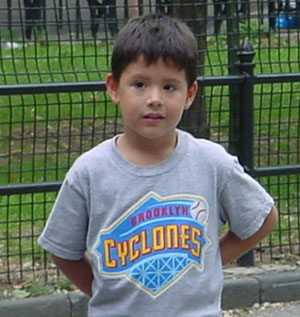 Agent King then informed the crowd the next stunt wouldn’t only risk the lives of The Amazing Stuntmen, but also someone else as well. Stuntman Charlie was going to step directly on a crack, risking serious injury to himself and his mother’s back!! 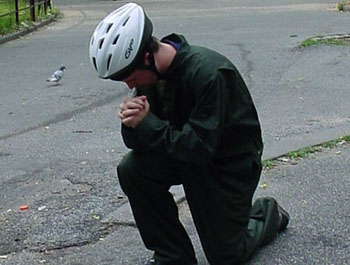 After saying a short prayer for the safety of his mother, Stuntman Charlie looked to Stuntman Chris for emotional encouragement, and then fearlessly stepping right on top of a prominent crack! 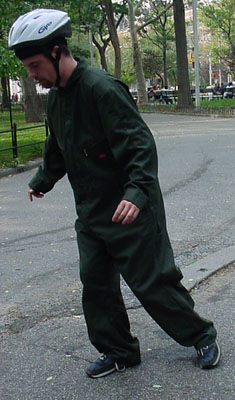 Immediately, Agent King placed a cell phone call to Stuntman Charlie’s mother. He spoke loudly so all could hear, “Mrs. Todd? … Is this Jennifer Todd? … How is your back? … Are you feeling OK? … thank you.” He hung up the phone and announced to the crowd, “She’s OK!!!!” The Amazing Stuntmen embraced with excitement. 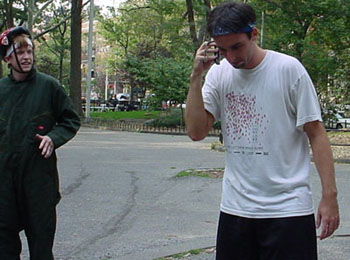 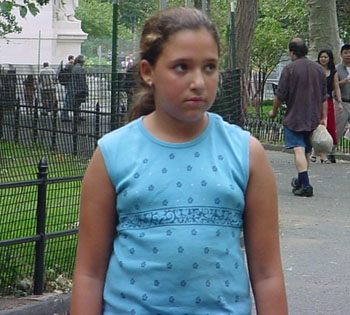 The Amazing Stuntmen’s final stunt was the deadliest of all! They were going to attempt to eat large amounts of Pop Rocks brand candy and drink Coke at the SAME TIME. This lethal mixture is rumored to have killed the actor who played “Mikey” on the Life Cereal commercials in the late 1970s, and it is a well known fact that stomach explosion is highly likely if these ingredients meet each other. 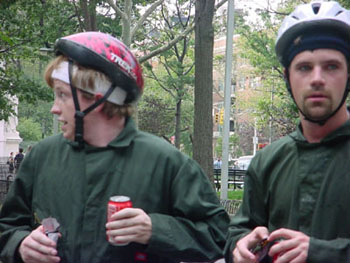 A hushed silence came over crowd as the stuntmen looked on with obvious fear. Agent King produced the Pop Rocks and Coke from the box of props and signaled for the stunt to begin. 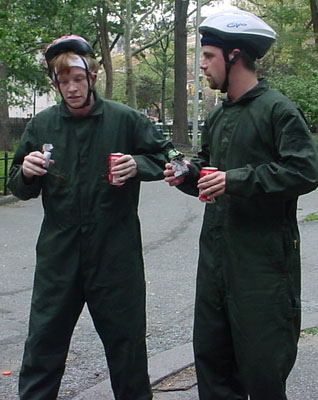 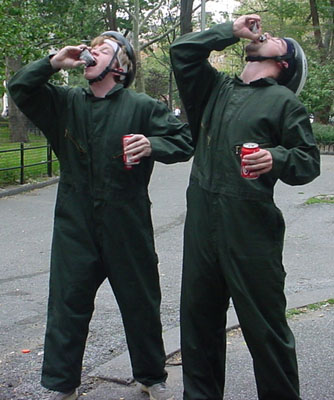 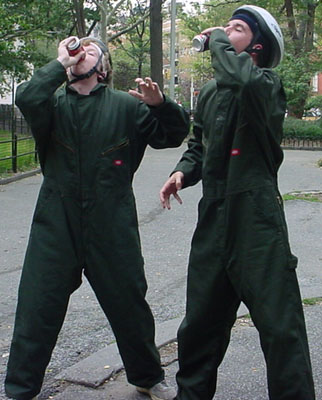 The Amazing Stuntmen immediately began to lose balance as a party of death took place in their mouths, throats, and stomachs. 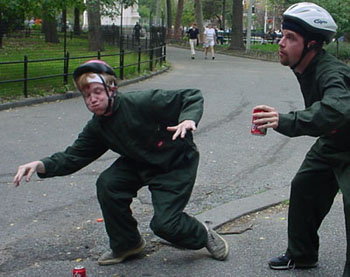 The crowd looked on with absolute horror as death seemed certain for the stuntmen. 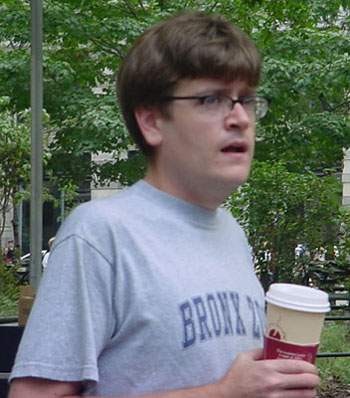 Heroically, Stuntman Charlie signaled for another package of Pop Rocks. Agent King delivered them and Charlie tore into package number two, doubling his chances of death! 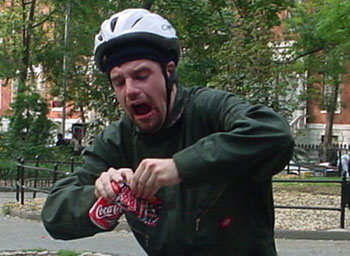 Stuntman Chris was so overtaken by the popping sensations that he could not physically get up from the ground. Agent King had to pour package number two directly into his mouth! 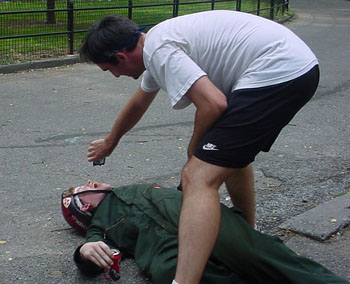 Stuntman Charlie struggled to stay alive as Pop Rocks exploded from his mouth and fizzled all over his face! 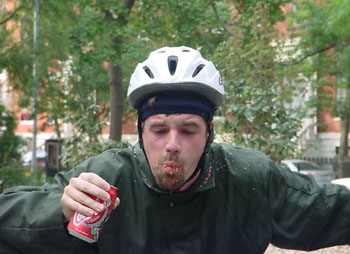 Somehow, amazingly, the stuntmen were able to recover from the deadly combination and muster a victory pose. They were OK! No fatalities! 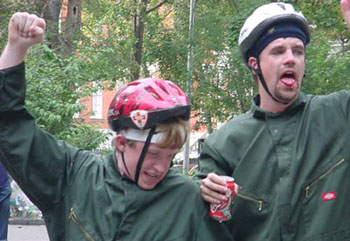