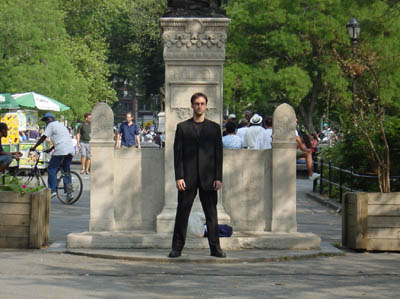 At around 4:15 PM, The Amazing Hypnotist (Agent King) positioned himself in front of a monument on the west side of Washington Square Park. He stood, clad in a black suit and spectacles, with his feet shoulder width apart and gazed into the distance. Meanwhile, his assistant (Agent Todd) roamed the park hyping the ensuing show.

Eight other Improv Everywhere agents were scattered around the park, blending in with others in the park. Slowly, these agents and other strangers began to crowd around The Amazing Hypnotist. Agent Todd asked for a volunteer for the first hypnotism, and Agent Arnheiter quickly raised his hand.

The Amazing Hypnotist put his hands on Carl’s shoulders and began to work his magic. After gently leading Carl into a hypnotic trance he explained, “When I say the word ‘blue’ you will think you are John Travolta.” The Amazing Hypnotist brought Carl out of the trance and then set him off with the code word “blue”. 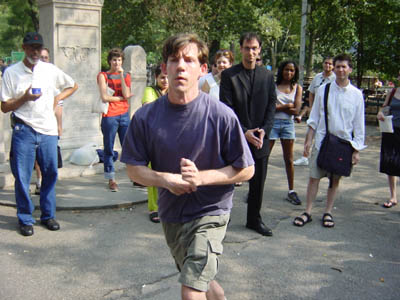 “John Travolta” (Agent Arnheiter) dances
“John” soon began to entertain the audience with a Saturday Night Fever style dance number. Eventually, The Amazing Hypnotist shouted out “blue” again, and Carl returned to normal. The crowd was beginning to get in to the act and was growing quickly in size. Agent Todd asked for the next volunteer, and Agent Amigone took the stage. 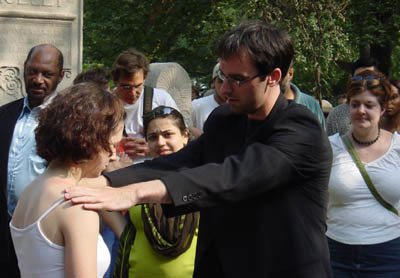 The Amazing Hypnotist takes “Jenna” (Agent Amigone) under.
Amigone identified herself as “Jenna”, a NYU student who was at the park with her boyfriend (standing a few feet away, played by Agent Lovejoy). The Hypnotist began to work his magic.

The Amazing Hypnotist: Jenna, when I say the world “orange” you will think my assistant smells really good.

The code word was said and “Jenna” quickly approached Agent Todd and began to sniff around his neck, complimenting his cologne. The Amazing Hypnotist shouted “Jenna, Orange!” to bring her back to normal. He then took her under again.

The Amazing Hypnotist: Jenna, now when I say “orange” you will become very attracted to my assistant.

Agent Lovejoy, playing Jenna’s boyfriend, began to quietly protest. The Amazing Hypnotist said the code word and immediately Jenna headed straight for Agent Todd. She began touching his chest, looking into his eyes, and complimenting his looks. Lovejoy started to complain, but was quickly silenced by The Amazing Hypnotist, “It’s all part of the show sir. No need to get upset.” Jenna got closer and closer to Todd’s face and ultimately began to kiss him. This drew a huge gasp from the crowd, and an old man standing next to Lovejoy shouted out, “She has legal rights!” The Amazing Hypnotist quickly called out “Orange” and brought Jenna back to normal. She moved over to the side of the stage with Carl. 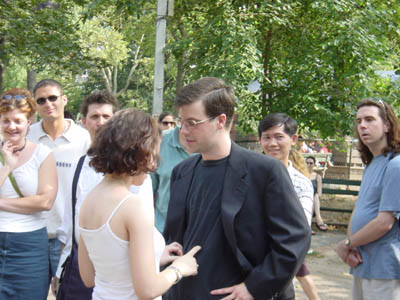 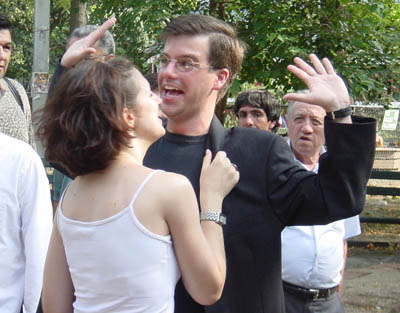 Agent Todd claims no responsibility as “Jenna” goes in for the kiss.
Agent Todd asked for the next volunteer and several hands shot up from the audience. Agent Berman was picked out of the crowd and identified himself as “Craig”. The Amazing Hypnotist went to work and setup that Craig would think he was in a desert when he gave the code word “red”.

Craig was taken out of the trance and the code word was given. He began to pant and indicate thirst. Agent Todd produced a small juice bottle and tossed it to The Amazing Hypnotist. Craig quickly grabbed the bottle and drained it’s contents. Agent Todd then brought out a giant lemon-lime Poweraid bottle and dangled it in front of Craig. 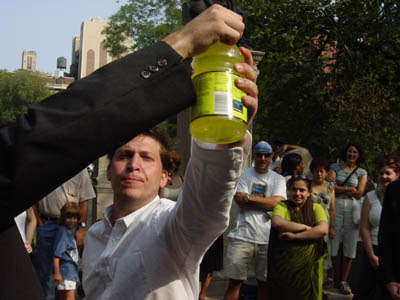 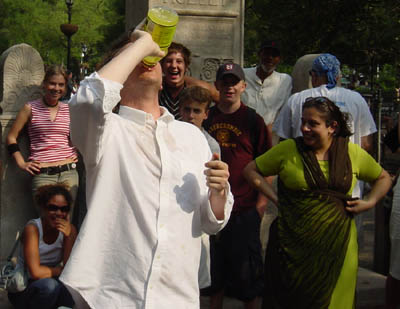 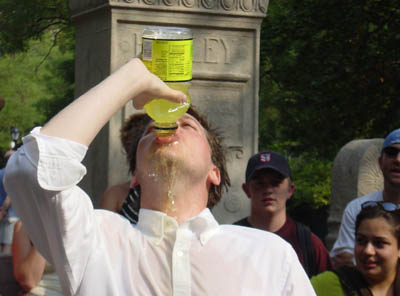 Within minutes Craig had downed TWO giant lemon-lime Poweraid bottles. The crowd was amazed with the breakneck speed the fluids were disappearing. The Amazing Hypnotist shouted out “red” and brought Craig back to normal. Craig was totally unaware that he had just drank over 70 ounces of liquid. His code word was shouted again, and Agent Todd produced a red bottle of Poweraid. 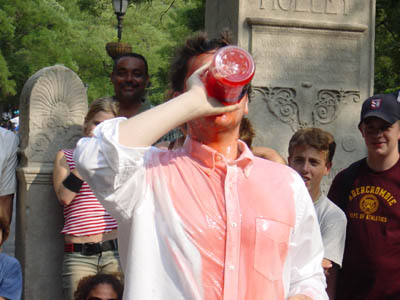 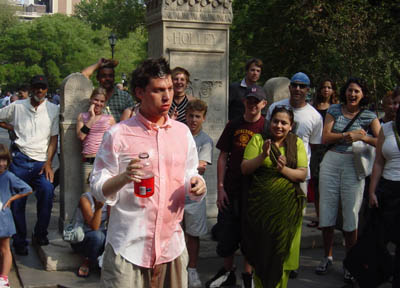 Some audience members expressed concern that The Amazing Hypnotist had ruined Craig’s shirt, but amazingly there were still many eager volunteers to be the next victim. Agent Todd chose Agent Kinney out of the crowd. The Amazing Hypnotist gazed into Kinney’s eyes and slowly and quietly talked him into a trance state. “When I say the code word ‘yellow’, you are going to think you are a stripper giving a performance.” He brought Agent Kinney out of the trance and said the magic word.

Kinney began to slowly grind and sway his hips to the delight of the audience. Members of the crowd began to taunt him with “take it off” cheers. Kinney expertly took his time with his strip tease, running his hands all over his body and then dramatically removing his shirt. 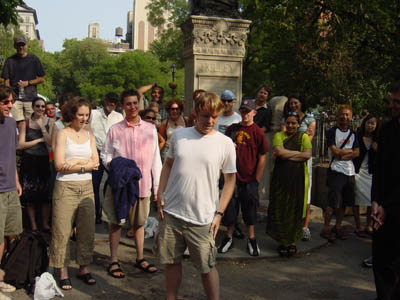 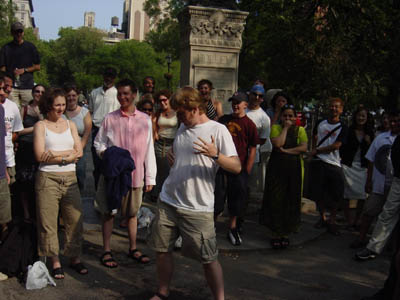 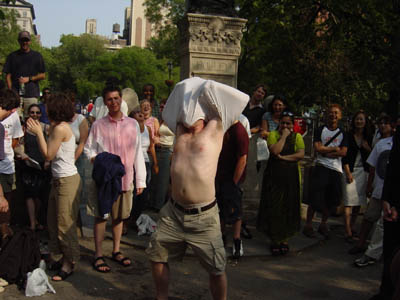 After Kinney had his shirt completely removed, The Amazing Hypnotist rushed to the three previous volunteers and called out their code words. Carl began to dance again, the Hypnotist tossed Craig a blue Poweraid which he began to feverishly gulp, and Jenna made a b-line for Agent Todd. In the meantime, Agent Kinney continued to strip, seductively removing his belt and placing it around his neck. 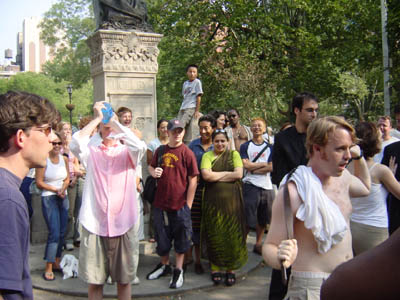 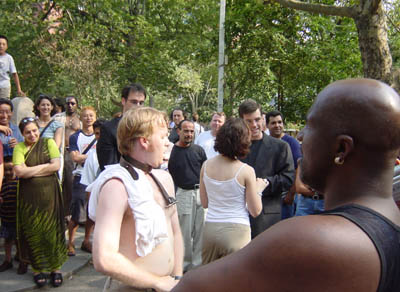 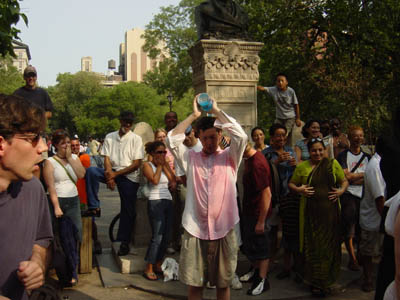 With all four volunteers under hypnosis, it was total pandemonium in the park. “John Travolta” began to stuff dollar bills into the stripper’s boxer shorts. Craig began to dump the blue Poweraid directly on his head. Jenna and Agent Todd began to passionately kiss as Agent Lovejoy loudly protested. 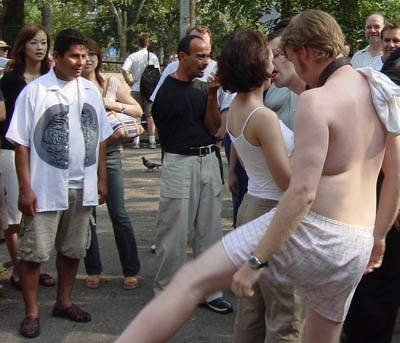 Just when chaos had taken over, The Amazing Hypnotist and his assistant Agent Todd bolted from the scene. Before anyone could realize what was happening, the two men were half-way out of the park, sprinting at top speed. 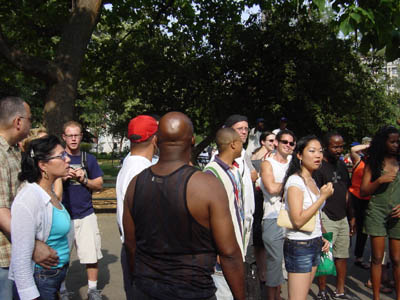 Audience members watch in shock as The Amazing Hypnotist and his assistant flee the scene.
Now there were four audience volunteers under hypnosis and no one able to get them out of their trance. Jenna attempted to run after Agent Todd and her boyfriend had to fight to hold her back. Craig began to frantically ask audience members for bottles of water. People from the crowd started to shout out the code words, “Yellow! Red! Orange! Blue!,” to save the volunteers. 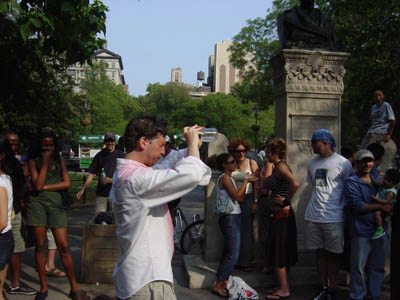 “Craig” (Agent Berman) with a bottle given to him by a crowd member.
The crowd was left in shock, not knowing what they had just seen. The four hypnotized volunteers left the park individually, remaining in trance the entire time. Some audience members stuck around and tried to figure out what had happened. Was it a scam? The Amazing Hypnotist never asked for any money. Was it all a setup? The hypnosis will wear off, won’t it? Other audience members followed the volunteers out of the park in hopes of figuring out more.

Arnheiter: The Amazing Hypnotist and his assistant bolted from the scene. The crowd wasn’t sure what was happening. There were gasps, and people were saying “where’d they go?” and “that’s not right!” A few folks started yelling out colors, trying to snap us out of our “trances.” That didn’t work. Eventually, I stopped dancing to “go get pizza or somethin’.”

As I walked away, people were calling after me, yelling “John, John!” I didn’t stop. A guy in a white T-shirt started following me. I circled the park and people from the crowd kept asking me if I was OK. I didn’t answer. A couple carrying a copy of the Sunday NY Times asked if I was OK and I asked them if they wanted my autograph, then I took out my pen and reached for their paper, leaving them with a “Love, John Travolta.”

Amigone: After they left I kept yelling at Agent Lovejoy, “He went that way. I want to go that way.” “I don’t love you anymore. I love him.” Also, “I don’t want to go with you. Let me go.” People kept looking over as I yelled to see Richard holding me back from running by my back-pack. It may have looked like a kidnapping to some. It kind of felt like one.

Berman: Two people gave me their bottled waters when I was screaming for liquids for my dehydrated throat. I ran over to a vendor after you left and grabbed a bottled water from the man and before paying I just dumped the water all over my head. My girlfriend paid the irritated vendor and around 7 people had followed me to watch how/or if I was still under and also to see if it was real. We walked 5 blocks away to get a cab and one straggler followed us. I was honestly over hydrated and began to vomit out the Poweraid. After all, I had consumed over a half gallon in about a 10 minute period. We shook the entourage of one and got into a cab. I think you will be happy to know that the Gap Oxford button down shirt that I was wearing and that was doused in green, blue, and RED Poweraid was washed yesterday and is as good as new.

Kinney: An older man in the front row asked me as I put my clothes back on if I was part of the show. I replied “What show?”, and he said, “The hypnotist show.” I said, “I don’t know anything about a hypnotist, but I strip every half hour right here in the park.”

It’s amazing what you can get people to believe sometimes. If anyone was skeptical about our act, they chose not to vocalize their doubts. The crowd just cheered and clapped along with each hypnotism, even as shirts were ruined, relationships tested, and pants removed. We’re glad they had fun. So did we.