What happens when you ‘Yes And’ a stranger.

It was around 1 PM when I first saw him. I had just finished a job interview and was walking through Union Square on my way home via the L train. He was standing in middle of the southern area of the park in front of an uninterested crowd. The man was black and at least 50 years old. In his left hand he held a yellow pocket radio, and his right hand was clad with a fierce black glove. In front of him lay the Holy Bible. The Doors’ “Touch Me” blared out of the radio, and the man moved about with a style not unlike “Losing My Religion”-era Michael Stipe, as he shouted incoherently. I had to hear the story behind this display; I approached him.

Todd: What’s the radio for?
Man: The radio?
Todd: Yes.
Man: The radio is the voice of the people.
Todd: So you see it as a symbol? It represents humanity?
Man: A symbol? The radio is the people. I like the songs. They are familiar to me.
Todd: Are you preaching? I can’t understand what you’re shouting.
Man: Preaching? I am always preaching.
Todd: Is that what the Bible is for?
Man: The Bible? No! The Bible is part of the Trinity.
Todd: And what’s that?
Man: The Trinity is (pointing to radio) the Father, (pointing to Bible) the Son, (pointing to himself), and the Holy Ghost.
Todd: So you’re the Holy Ghost?
Man: Yes. This is my park. I live here. All of these people are my people.
Todd: So you think of all of these people as your congregation?
Man: Congregation? No! We are all a congregation.
Todd: Do you like The Doors?
Man: The Doors?
Todd: The music playing.
Man: I like all music. It is the people.

I returned to Union Square at 6 PM to meet Agent Lovejoy. We had plans to create a scene somewhere in town. As he was walking to meet me in the park, I gave him a cell phone call and told him, “When you get to the park, you don’t know me.” The man was still there, still playing the radio, and still moving and shouting.

One of the most important concepts in improvisation is that of `Yes And’. During a scene, experienced improvisers will take their partner’s statement and both agree with and add to it. Agreement is key. For example, if one player begins a scene with the line “These reports are all wrong!,” his partner may Yes And him by replying, “Sorry boss. I’ve just been so wrapped up with my divorce that I can’t seem to do anything right these days” (i.e., “YES I accept your offer of being my boss, AND I will add to the scene by revealing that my work is suffering due to my personal life”). I decided to see what kind of scene I could create if I Yes And-ed the guy in the park.

Todd: Hi. Remember me? I’ve been thinking about everything you said earlier today, and it’s really starting to make sense.

Todd: Do you need any followers? I really want to learn more from you. I could be a disciple or something.
Man: Hold this.

The man gives me a plastic knife and fork (I’m assuming he used them to eat lunch earlier in the day). I hold on to them in one hand, tightly. The man begins to walk away.

I stand by myself and follow his instructions. Those sitting in Union Square begin to stare, point, and whisper. Agent Lovejoy arrives.

Lovejoy: Excuse me sir? Why are you standing there with a knife and fork?
Todd: What? Oh…they were given to me by this guy that preaches here. He told me to wait here.

Lovejoy reveals that he is a priest of Scientology and tries to convince me to come with him and learn more. I thank him for the offer but I insist that I must wait for the preacher man to return. Two punks, seated nearby, enter the conversation.

Punk 1: Why is it so important to you to wait on him to come back?
Todd: What do you mean? He told me to.
Punk 1: But why is does it matter so much? You don’t even know that guy.
Todd: I don’t know…I guess I’m just really confused right now.
Punk 2: And you’re looking for something to ground you?
Todd: Yeah. I think that’s what we’re all looking for. After everything that’s been going on… I just feel so lost. I looked at this guy and it was clear to me that he knew exactly what he is supposed to be doing.

The man returns. I rush to meet him. I’m still clutching the knife and fork.

I follow him and we begin to head south. Lovejoy trails a step behind us, still trying to convince me to go with him. Despite the glaring `Don’t Walk’ sign, and the steady traffic, the man crosses 14th Street with out looking. I’m right there with him. 2 cars slam on brakes and screech to a halt as we cross the street. It was like Moses parting the Red Sea.

We continue on our walk and turns out that the `place’ we are going is a corner store where the man can buy a coffee. He opens up his backpack, revealing several bottles of prescription medicine. He over pays for the coffee by about a dollar, throwing the money at the register.

Man: Money! Money! Money! Everyone wants money! They will never say no to money. Money is nothing!
Todd: Yeah! We don’t need money! All we need is ourselves.

We walk back to the square and sit down. The two punks are still there and are now laughing out loud at us. I am still holding on to the knife and fork. The man hands me the coffee.

Man: You will take the first sip.
Todd: I don’t even drink coffee, but I’m going to take a sip, anyway!
Man: Yes, you are. Of course.

I take a sip. He smiles and takes his own sip.

Man: Now we are brothers.
Todd: We are brothers. I can feel it.
Man: We learn how to share.
Todd: We share this coffee together. People will learn to deal with us.
Man: I am waiting for my bride.
Todd: I am, too. I know she will be here soon.
Man: My bride is a woman. She is not a homo.
Todd: I know. How long have you been waiting?
Man: Many years. She will meet me here. I live here, in the park.
Todd: I’m sure our brides will find us.
Man: Drink more coffee.
Todd: Thank you. 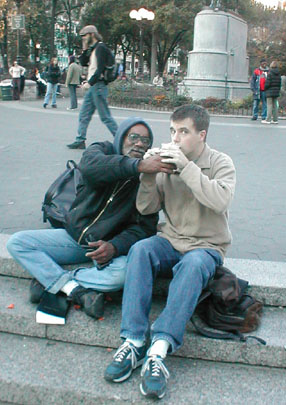 Minister and Disciple
We sit in silence for a bit. I ask Lovejoy, who has given up on converting me to Scientology if he wouldn’t mind taking a few pictures of my new friend and me. The man is very happy to be in the pictures. We say `brothers’ instead of `cheese’. I tell him that I must go, but that I will return to visit him. We hug and part ways. Lovejoy sits down near the punks.

Punk 1: Did you know that guy?
Lovejoy: No.
Punk 1: So you’re just intervening?
Lovejoy: Yeah…he seemed a little lost.
Punk 2: You’ve got to protect people from the crazy people. What do you do?
Lovejoy: I’m a priest of Scientology.

Punk 1: Well, I like to intervene by throwing rocks at old people.
Lovejoy: (serious) I guess that intervenes with their life. 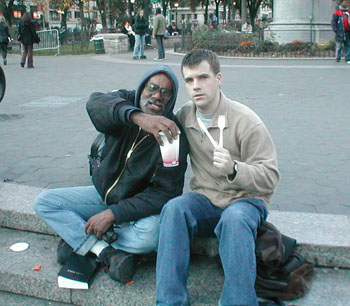 “Brothers”
All in all the mission was fantastic experience for me, and I think the man (we never exchanged names) had a great time, as well. It was exciting to see the world from a completely different perspective, and I think I was able to make the scene as exciting as possible (without angering, offending, or making fun of the man) simply by agreeing with every ‘offer’ I was given.. I suppose I could have made more offers of my own, but this guy was doing some pretty damn great work by himself. Mission accomplished.