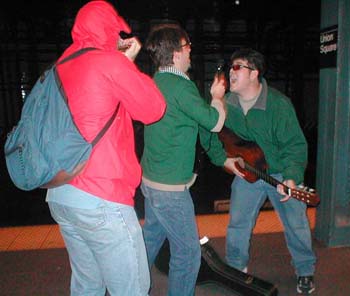 The Shogun brothers reunited.
The first Parallelogram show in months.
And the ‘liberal’ media still ignores them.

Those who have been following the careers of half brothers Dustin and Mac Shogun are well aware of the difficulties they have encountered in their attempts at musical success.  But even the die-hard Parallelogram fans were shocked in July of 2001 when Dustin fled Goldsboro, NC for a solo career in New York City.  Some said that the brothers would never perform together again.  They were wrong.

After weeks of lonely, unsuccessful performances in Manhattan, Dustin met someone who would forever change the way he looked at music, friendship, and even life itself.  He called himself ‘Edmund’ and claimed to have a last name, but was unable to remember it.  Edmund, a tall quirky guy who has never been seen in public without his red storm jacket and blue backpack, was playing his harmonica in the Greenpoint Avenue ‘G Train’ station when Dustin discovered him.  Dustin recalls, “He was just standing there with that big rain coat on, right in the middle of the summer.  I new that he would totally know how to jam.”  Edmund, who now calls Dustin his ‘eternal only friend’, was skeptical at first, “I saw him in the train and he said ‘hello’ and I didn’t say anything and I just played my harmonica like I didn’t hear him.  Sometimes I act like I can’t speak English or that I’m hard of hearing because it protects me just like my red jacket protects me.”  Eventually Edmund looked up and saw the microphone in Dustin’s hand.  He recalls, “He asked me if I wanted to jam.  I said, ‘Do mailboxes stand upright?,’ and he laughed.  Then we jammed.” 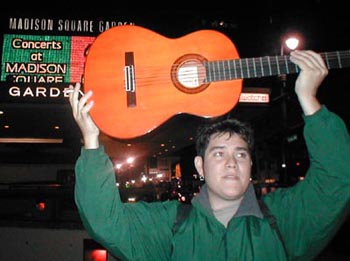 Mac Shogun arrives in New York
On October 19, Mac Shogun hitch-hiked all the way to New York to visit his half brother.  He brought his guitar along for the ride, holding out hope that Dustin would want to perform.  “When I got to the city and saw Madison Square for the first time in person, I knew that Dustin and I were destined to play again.  We were going to play in the same city that Aerosmith had played in.”  Jealous tensions flared between Mac and Edmund, but the two finally agreed to perform together with Dustin under the name Parallelogram.  According to Dustin, “It was totally perfect.  I got to play with Mac again, and Edmund got to totally be a part of it.  We finally had the right number of jammers again.  I can’t be Parallelogram by myself.  It takes three.” 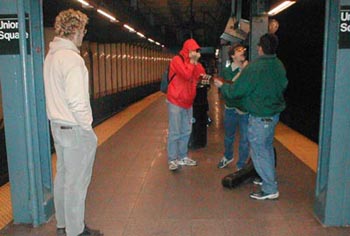 The World’s Most Famous Subway Platform:
Union Square Garden
The trio headed for the ‘L Train’ platform in the Union Square station where tens of people would eventually congregate to wait for their ride home.  The ultimate cover band was back.  As usual, the band worked solely on audience requests, covering the Pet Shop Boys, Brittney Spears, the Pixies, MC Hammer, Elvis, and The Beatles, just to name a few.  Despite’s Mac’s plea of ‘We don’t want any money’, the band still managed to make two dollars, and sent the Brooklyn-bound crowd home with a smile. 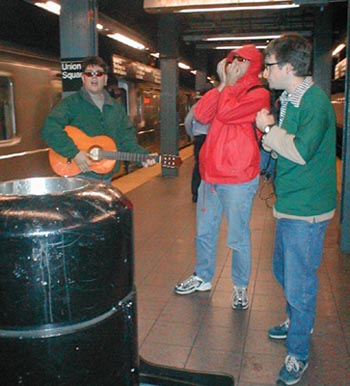 Mac Shogun, ‘Edmund’, Dustin Shogun
The show was a complete success for the band, and Dustin and Mac ended up performing for the crowd on the train ride back to Williamsburg.  The two closed the show with a ‘slow-jam’ version of the Beastie Boys’ hit “Sabatoge”, and a special ‘L Train’ rendition of Dr. Dre & Tupac’s “California Love”.  Mac remembers, “It was a beautiful moment.  I really feel like New York City is the big time.  I can go back to Goldsboro now and tell Dignon and everyone that I know what’s like to play at the famous Union Square.  Sure, Dustin is sharing a room with seven other people in a real small apartment,  but he’s making ends meet, one quarter at a time.”   Does this mean that Parallelogram is back together?  Dustin isn’t sure, “It was totally hip to play with Mac again, and I totally wish he lived here.  For now, I’m going to focus on jamming with Edmund.  He’s got some amazing catch-phrases that I think could totally get us money.  At this show we made $2 in twenty minutes.  That’s $6 an hour, and that is way above minimum wage.  And unlike everyone else, Edmund and I aren’t just working 9 to 5, we’re jamming 24/7.”