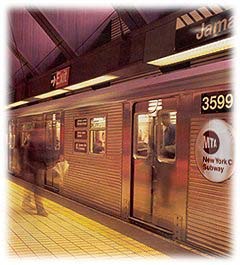 Why just ride the train, when you can take everyone on a ride?

The New York City subway. As intricate and fascinating a system it is, it’s usually not the best place to go looking for joy and happiness. People keep to themselves as they read, tune out with earphones, or simply stare at the ground. In the summer it’s too hot, and in the winter it’s too cold. There’s really not much going besides the never-ending process of waiting.

Sure, every now and then some sort of performance occurs on a train, maybe a break dancer, a singer, or a sad soul telling his life story, but the performance is always followed by a request for money. The trapped audience knows that the plead for donations is on the way, and most folks try to ignore what’s going on so as to not feel compelled to pay for it.

But the typical subway ride is dead silent. When people do talk to each other on the train, everyone else listens. This is what IE agents Keech, Lovejoy, and Todd have taken advantage of: a venue where everyone is ready to listen and has nothing to lose.

Mission One: The Long Lost Brother

Lovejoy and Todd enter the crowded, rush hour train separately. Moments into the ride Lovejoy taps Todd on the shoulder and the scene begins:

Lovejoy: Excuse me.
Todd: Yes?
Lovejoy: Were you by any chance adopted?
Todd: What? … Yes.
Lovejoy: Really? Because I have this photo at home of my birth brother… and it really looks like you.
Todd: Oh. Okay.
Lovejoy: Where are you from?
Todd: South Carolina.
Lovejoy: Really? No way. That’s where I grew up.
Todd: Wow.

Lovejoy: You don’t by chance have a birthmark on your right thigh do you?
Todd: Yes… yes… I do. I do.
Lovejoy: I can’t believe this… this is…
Todd: Are you sure…
Lovejoy: This is amazing…
Todd: You live here?
Lovejoy: I’ve been looking for you for years…
Todd: I don’t believe this is happening…
Lovejoy: …and now I find you on the train…

(Todd and Lovejoy hug. Those surrounding them are smiling with joy.)

Lovejoy: I’m Allan Richards.
Todd: I’m Robert Patterson… or I guess, Richards!
Lovejoy: This is so wonderful. What stop are you on?
Todd: The Rego Park stop.
Lovejoy: I live at the Steinway stop!
Todd: That’s like 5 stops from me!
Lovejoy: I know, can you believe we’ve been living so close to each other?
Todd: This is so unbelievable.
Lovejoy: Maybe you’d want to come over this afternoon for a coffee or something.
Todd: Yes… that would be great.

The entire car was visibly touched by this heartfelt reunion of the brothers that had never met. Lovejoy and Todd were on the verge of tears. The scene ended up developing into a less inspiring outcome. Todd revealed he was a devout Baptist Christian, and Lovejoy informed him that by birth, he was Jewish. Todd became very uncomfortable with the knowledge that he was Jewish by ethnicity and that his birth family did not share his beliefs. The happiness the two shared for their reunion was replaced by awkward silences. Todd agreed to visit with Lovejoy, but “for only a few minutes”.

Did those riding the train believe that they had just witnessed a real reunion? Yes. Is that the point? No. The train was taken from it’s normal overcrowded and irritated state to an intriguing scene that, regardless of the awkward outcome, will always be a great story for those who witnessed it.

Keech and Todd enter the train separately. Keech seems to be having difficulty figuring out which stop he needs to get off on.

Todd: Are you lost?
Keech: No.

Todd: What are you a tourist or something?
Keech: No.

Todd: So your parents pay for everything you do.
Keech: Is there something wrong with that?
Todd: Dude, I was just trying to help you figure out where you’re going. You don’t need to start a fight, man.
Keech: I’m not trying to start anything. I just don’t appreciate you calling me a tourist and insulting me.
Todd: I’m not insulting anyone. What’s your problem? You think just ’cause you’re rich you can be an ass on the train?
Keech: What’s your problem?

Keech: Hey man. I’m sorry about that. I don’t know why that had to happen.
Todd: Yeah. Sorry man. I’ve just had a long day. It’s cool.
Keech: Hey, do you want to trade shoes?
Todd: What?
Keech: Let’s trade shoes.
Todd: Okay. Sure.

(Keech and Todd trade shoes. The train stops, and both exit, separately.)

Inspired by the success of the shoe scene, Keech and Todd took it to the next level with this mission. Once again Keech and Todd entered a subway car, separately. Keech is wearing a newly-purchaed jump suit; Todd is wearing blue jeans and a gray polo shirt.

Todd: Hey man. Where did you get that jacket?
Keech: I just bought it in the village.
Todd: Cool.

Todd: Man, I’ve been looking for a jacket like that for a long time.
Keech: Yeah. I like it.

Todd: Hey, do you think I could try your jacket on?
Keech: Try it on?
Todd: Yeah, I just want to see how it looks on me.
Keech: Um… yeah. Sure. I guess. Can I try your shirt on?
Todd: You want to try this shirt on?
Keech: Yeah.
Todd: Okay. I don’t know why anyone would want this boring shirt, but sure, whatever you want.

(Todd takes off his shirt and Keech takes off the jacket. They trade. Most people sitting around them are fighting back laughter. Some are unafraid and laughing out loud.)

Todd: Man! This jacket is awesome! It’s just what I’m looking for. How do I look?
Keech: You look great.
Todd: How much would you want for this.
Keech: You know what… why don’ t you just keep it.
Todd: What? Really?
Keech: Yeah. This shirt fits me fine. Just keep it.
Todd: Thanks! This is so cool. Thank you so much!

(A woman in back of train can’t stop repeating, “They HAVE to know each other!”. Young man sitting across from Keech is laughing so loud he has to cover his face with his hands. There is a long pause.)

Todd: You know, those pants you have really match this jacket perfectly.
Keech: You don’t…
Todd: Maybe you could at least tell me where I could buy them?
Keech: You want to try them on?
Todd: Well…yeah, I do. Do you want try my jeans?
Keech: I don’t know if they’ll fit me, but yeah, let’s do it.

(Woman in back of train screams, “No, they’re not! No way!” Todd takes off his shoes and jeans and is now standing in his boxer shorts and jump suit jacket. He waits as Keech tries to untie his shoes. Keech takes his sweet time.)

Keech: You know what? I really don’t think those jeans are going to fit me. This isn’t going to work.
Todd: So you’re not going to let me try on your pants?
Keech: No, I don’t think so.
Todd: So you’re not taking your pants off?
Keech: No.
Todd: This is great. You get me to strip down in my underwear and embarrass myself in front of all these people, and then you tell me I can’t even try on the shorts!?
Keech: I’m sorry. There’s just no point. You can keep the jacket.
Todd: Well. Thanks. Thanks for humiliating me in front of the whole train.

(Todd puts his pants and shoes back on and walks to the other side of the train. He sits and stares at the ground, embarrassed. The next stop, Todd gets up and leaves the train. Keech stays.)

Those left on the train try to get Keech to admit that he knew Todd. Keech denies it until the end and claims, “After all that this city has gone through, isn’t it time to do nice things for strangers? That guy needed the jacket more than I did.” Did those on the train believe that Keech and Todd really didn’t know each other? Probably not. Were they treated do an unexpected dose of comedy on their way home? Absolutely. Missions Accomplished.