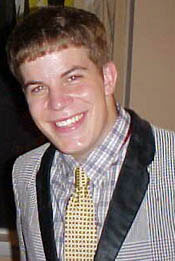 Below, please find my long-overdue follow-up report to our recent Mission: Ben Folds’ Last Night in Town, Part II. If it wouldn’t blow my cover here, I’d apologize meekly for taking so long with this. But I can’t do that now – too many people are watching. So, instead – I REFUSE TO APOLOGIZE! FOR ANYTHING! DO YOU HEAR ME? HUH? DO YOU?

Of course, there are minor discrepancies between my follow-up report and your initial one. But I’d like to believe that the general spirit of the mission will be captured in both accounts. Feel entirely free to edit or file the report as you see fit.

I look forward to your arrival in North Carolina later this week and hope that you have been well.

Around 11:30 on the night of August 3rd, Agent Todd and I met Agent Arnold at the Greenwich Village Brewing Company in Manhattan. By this point in my weekend-long stay in New York, I had been debriefed on the events surrounding the mission of the previous evening and was thrilled about it.

Agent Arnold (a.k.a Brandon, who’s over 21) had just come from a dinner served by an extremely attractive French woman at a nice French bistro; Agent Todd (a.k.a Charlie, also over 21) and I (a.k.a. Jon) had recently eaten $6.95 dinner specials at an Indian restaurant.

I had arrived in NYC on a commuter train earlier that afternoon, having spent the past few weeks in a summer program at a nearby university. I did not end up quitting this program, as my profile might suggest (and as I did after a year at another, comparable school), but I am really disillusioned about it now.

Soon after we arrive at the GVBC, we leave, and head south and west, to another corner bar whose name escapes me now. I explain to the bouncer there (hereafter, Bouncer) that although I am only twenty, I am still good at heart and would like to come in to his bar to eat something. Bouncer, who is at least 6’3″ and 225 lbs., smiles condescendingly and lets me in. Brandon and I sit at a table and order chicken wings, which I don’t share; Charlie sits alone at the bar. I have a big green backpack with me, and Brandon has Charlie’s backpack. We are two guys with backpacks at a bar on a Friday evening in Greenwich Village, which I think makes us look like we’re from out of town.

After five wings, Brandon and I notice that, hey, wait a second, isn’t – is that Ben Folds at the bar over there? We should talk to him. We’re big fans.

Ben is exceedingly kind, and he thanks us for supporting him. It turns out that Brandon and I both went to college at UNC-Chapel Hill; and Ben has spent a lot of time in Chapel Hill and Carrboro, and in other parts of North Carolina, so we have something in common. Ben autographs two paper napkins for us. Warm and happy, we go back to our table and chicken wings.

Two attractive women from Los Angeles, who hadn’t really talked to anyone else in the bar while we were there, immediately turn around and start talking to Ben, pretty eagerly.

Three wings later, Brandon heads back to the bar. I stay with the wings and don’t get the greatest view of what goes on, but, as I understand it, Brandon’s second encounter with Ben involves these elements:

So, by the time the drinks they’ve ordered arrive, everyone has his or her wallet out. And I think Brandon ends up paying for all four beers. But there is some confusion, and most of it’s due to the chicanery of Brandon, who’s a really great – and, by this point, pretending-to-be-fairly-drunk – heel.

My wings are gone. I step outside discreetly and call Charlie’s/Ben’s cellular phone with my cellular phone. To date, this is by far the best thing that has come from my having a cellular phone. Ben answers, and I say hey, it’s Walker and Julie, two of your actor-friends who’ve just gotten out of a show and want to hang out since you’re only in town for a night. I’m still outside, but I think what happens next is: Ben says goodbye to the two Los Angeles women and leaves the bar, presumably to meet Walker and Julie. I come back in and sit with Brandon, making sure to nod politely at Bouncer on the way to our table.

Several minutes elapse. Brandon and I don’t want to Charlie to have to stay outside alone for the rest of the evening, but we’re not sure how Ben Folds can really justify coming back into the bar. But Charlie, a real specialist, already has this figured this out: on his way to meet Walker and Julie, Ben will pretend to have lost his wallet and to think that he left it at Bouncer’s bar, so he’ll come back to look for it.

Charlie returns to the bar and heads straight for the bathroom, which is downstairs. He calls me from the bathroom on my cell phone, to let me know about his lost-wallet idea. Ben, then, checks the bathroom for his wallet. He doesn’t find it there, so he heads upstairs to the bar, Bouncer, the bartender, and the two Los Angeles women. He alerts them to the fact that he may have misplaced his wallet. Bouncer and Bartender conference behind the bar, occasionally glancing over at Brandon and me. The LA women are distressed and garrulous, and soon the whole place knows about Ben Folds and his billfold. The LA women suggest Ben speak to us about his problem.

BEN: Excuse me, have you guys seen a wallet around here, on the floor, anywhere?
BRANDON: [without hesitation, pretty-believably-drunk] Dude, I didn’t take your fucking wallet!

Ben says that no, he didn’t mean to imply that Brandon had stolen his wallet, but he’s just wondering if we’d seen anything. I apologize profusely and say I’ll keep an eye out for it. But Brandon is much louder than me, and he keeps ranting:

BRANDON: What the fuck? Who are you? Ben Folds? I didn’t take your fucking wallet. [etc.]

Ben observes that Brandon’s obviously too out-of-sorts to deal with the situation, so he calls me over, away from the table, to discuss the wallet-loss like adults.

Charlie, then, hands me his wallet, which I conceal. We head back to the table.

During my absence, both Los Angeles women approach Brandon. They’ve never liked him, and I think they think Brandon has stolen Ben’s wallet. They admonish us:

Brandon and I have become brothers.

BEN approaches us. He is not amused.

BEN snatches the wallet from me.

Brandon and I are both a little speechless now. Brandon is more grinning-speechless, and I’m more distraught-speechless. The LA women look at us hatefully. Ben goes over to Bouncer and Bartender and explains what’s happened. He and the LA women receive free drinks. The LA women end up giving Ben their phone numbers in Los Angeles, so he can call them the next time he’s playing out there. In Ben’s presence, the LA women refer to Brandon as “a douche-bag.”

Bouncer, who’s dressed in an inordinate amount of black leather, approaches our table.

BRANDON: [looks up at BOUNCER, grins] You’re not very friendly.

BOUNCER: I AM friendly.

BOUNCER: [CONT’D] I can become UN-friendly.

But we don’t go, right away. Instead, Brandon and Bouncer stare at each other for a solid thirty seconds. I get antsy. Brandon relents, for his little brother’s sake, and we leave the bar, me hanging my head in shame, Brandon pleased as punch. On the way out, I think Brandon insults Ben Folds one last time, in kind of a juvenile way, but I’m not sure exactly what he says.

We walk for a few blocks, and then Ben calls my cell phone, looking to speak with Clark, another actor-friend. I say yeah, this is Clark; Walker and Julie and I want to hang out, Ben, so meet us uptown. Ben leaves the bar a hero, and Charlie meets us in a few more minutes.

All told, the mission lasted more than 2.5 hours and was, by the unanimous decision of the Executive Partners, a complete success.