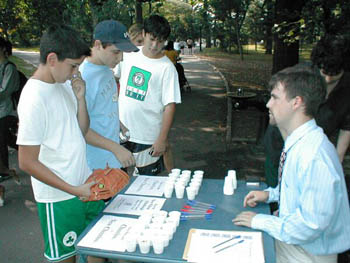 New Cheerios.
because all good things…can still get better!

In a taste test between two identical substances, will people still have a preference?  Can people be talked into believing a product tastes a certain way?  Would people actually believe that General Mills was planning to replace Cheerios with New Cheerios (especially after the failed attempts by the Coca-Cola company in the 1980s to market New Coke)?

IE Agents Lovejoy and Todd have an answer for you. 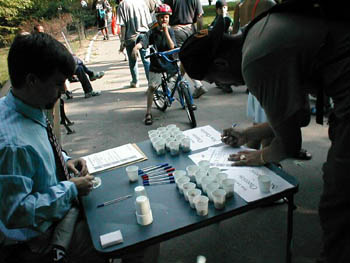 Cheerios vs. New Cheerios. The taste test challenge.
Todd and Lovejoy set up their table in the heart of Central Park.  Flyers announcing the ‘New Cheerios Challenge’ were put at the front of the table along with mini-dixie cups filled with Cheerios on one side, and New Cheerios on the other (all cups actually contained regular Cheerios).  Todd manned the table while Lovejoy called people over.  The agents claimed to be from ASA Marketing, a marketing research firm that had General Mills as one of their clients.  Agent Lovejoy informed the taste testers, “New Cheerios is a new product that will be available in the spring.  It’s still in the development stage.  It doesn’t even have a box yet.  General Mills needs your feedback to help them decide how to market New Cheerios.”  If asked what was different about the new product, Lovejoy explained that New Cheerios had more vitamins and less after-taste than regular Cheerios.  After tasting, those participating in the taste test were asked to fill out a short survey explaining their reactions.

How Does New Cheerios Taste?

Is New Cheerios a Good Idea?

Sadly, the agents were only able to obtain only four completed surveys (most taste testers opted to not fill out the survey) before the Park Ranger put a stop to the fun. 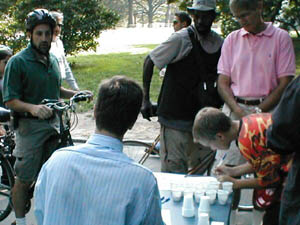 “What you’re doing here is really bad.”
The Park Ranger explained that corporations were not allowed to promote their products in the park and was particularly alarmed that food was being distributed without a permit.  Throughout the ten-minute discussion of park policy that followed, the Park Ranger never once commented on the fact that the taste test was for New Cheerios.  He didn’t even notice when all of the dixie cups were emptied back into the same bag. 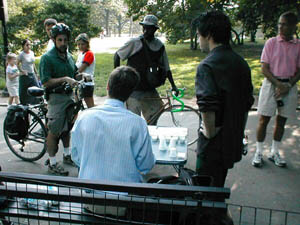 “I’m going to have to ask you stop.”
Other highlights:

Maybe Improv Everywhere agents should think about getting a permit before their next mission… Nevertheless, mission accomplished.

Epilogue: The Revenge of General Mills