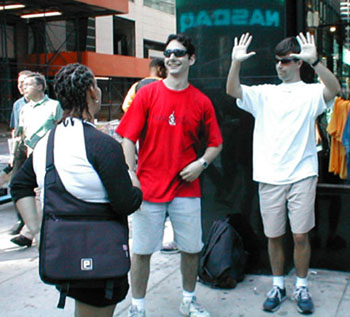 No props.
No costumes.
No preparation.

Agent Blumenthal and Agent Todd had 2 hours to spend together before Blumenthal’s flight back to Chapel Hill.  After meeting up in Times Square in front of WWF New York, they knew they were in the perfect place to draw a crowd for an undercover mission.  But what?  The agents were in their street clothes, had no plan of action, and possessed no props to aid their cause.  But this is Improv Everywhere, right?  We don’t need things like ‘props,’  ‘costumes,’ ‘scripts,’ or ‘game plans’.  All we need is a public space (and it doesn’t get much better than Times Square).  Using the ‘performance by request’ concept used in the Parallelogram missions, Todd and Blumenthal created The Amazing Mime mission.  What would happen if a mime (with no talent) worked by request? 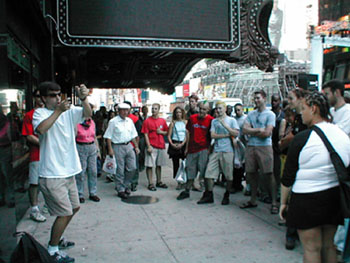 “Using a soda fountain in a bagel shop”
Agent Todd assumed the role of the mime and ceased speaking.  Blumenthal became his barker and began to create a crowd.  “Alright everyone, listen up!  This guy here is an incredible mime.  He can mime anything!  Can I please have a request?  What would you like to see him mime?” 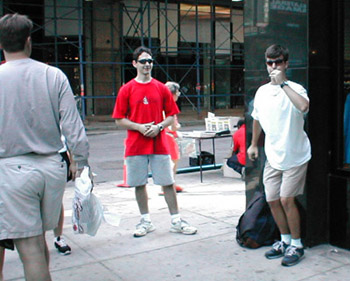 “Eating a donut”
Some things mimed by the Amazing Mime: 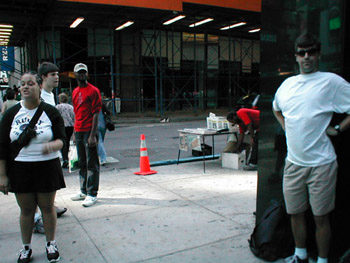 The Amazing Mime strikes a pose.
Other highlights: 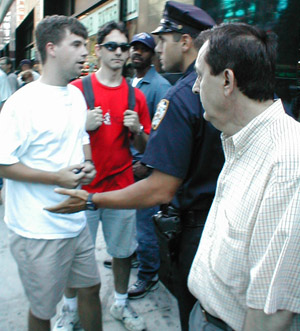 “Guys, it’s time to go.”
Unfortunately, the New York Police Department did not enjoy The Amazing Mime as much as the crowd.  3 police officers put a swift end to the show.  “If you guys aren’t out of here in three minutes, there will be twice as many officers here.”  Apparently, The Amazing Mime did not have a ‘permit’.  Mission accomplished.