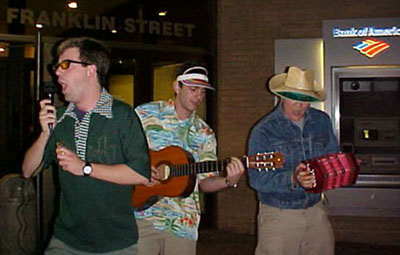 Having achieved absolutely no following in their hometown of Goldsboro, North Carolina and after being asked by the mayor to quit ‘messing about on the streets’, the band knew that it was time to take their act to the big time, Chapel Hill. So in the summer of 2000 they began the weekly ritual of packing up the truck and driving across the state to perform on Franklin St., ground zero for student-life at Chapel Hill. 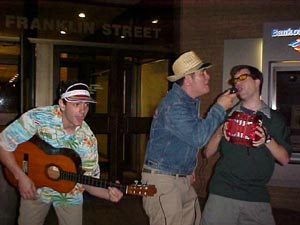 “Shotgun! In the Shotgun!”
Parallelogram, whose lineup then consisted of brothers Dustin and Mac Shogun and their friend Flex McTrucker, touted themselves as being the ‘ultimate cover-band’. In fact, they were. Using a microphone without an amplifier, a 6-string guitar with 5 strings working and one hanging down, and a toy-store harmonica, the band was able to cover EVERY song. From “Brown-Eyed Girl” to “Sabatoge” to “Every Rose Has it’s Thorn”, Parallelogram was able to meet its audience’s requests with ease.

They made money. One time they even made enough for a pizza and a 12-pack of PBR. 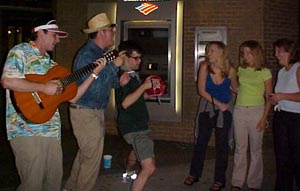 “You’re my brown-eyed girl!”
In the fall of 2000, McTrucker left the band to pursue a solo career in Los Angeles. Local musician Dignan Messner was quickly hired on to fill the void, but most critics agreed that Parallelogram was never really the same. For starters, McTrucker had taken the harmonica with him when he left. Messner brought along a concertina as a replacement, but as they didn’t really know how to play it, it wasn’t much help. After a heated argument following a particularly unsuccessful show in the summer of 2001, Dustin Shogun walked out on his band mates and fled to New York City. There are whispers of a Parallelogram reunion show in the near future, but nobody really wants to see that happen.