For our latest mission, thousands of people followed secret, synchronized instructions delivered via headphones in New York’s Battery Park. Participants dressed like tourists in order to blend in and surprise the real tourists who populate the park. The crowd of over 2500 made music together with tuned percussion tubes and engaged in an epic ping pong battle finale. The Boomwhacker tubes were generously provided by Rhythm Band Instruments, and the event was a partnership with Make Music New York. This was all part of our our fourteenth annual Mp3 Experiment event.

Enjoy the video above first, and then go behind the scenes with our photos below. 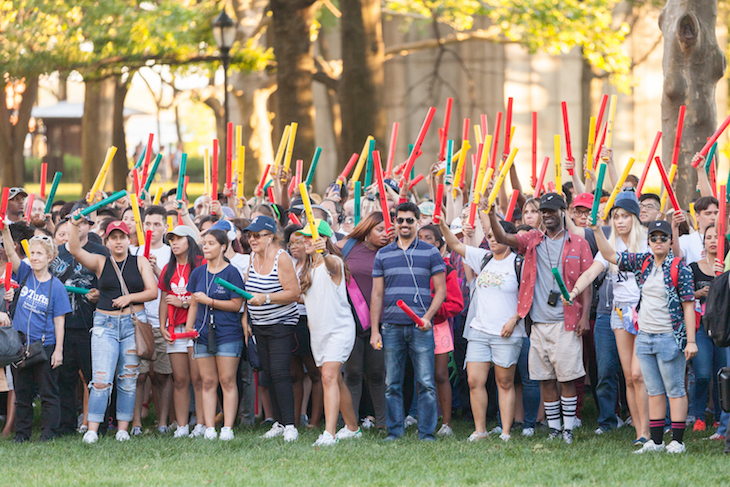 I’ve been wanting to stage an Mp3 Experiment in Battery Park for a long time. It’s the perfect balance of wide open space and steady foot traffic that the event needs. Make Music New York hooked us up with the space, and asked us if we’d be interested in doing something with the Boomwhackers instruments. It’s been many years since we’ve passed out a prop at an Mp3 Experiment event. It’s much simpler to have people bring their own props, but the Boomwhacker looked like it would be a great fit so we went for it. 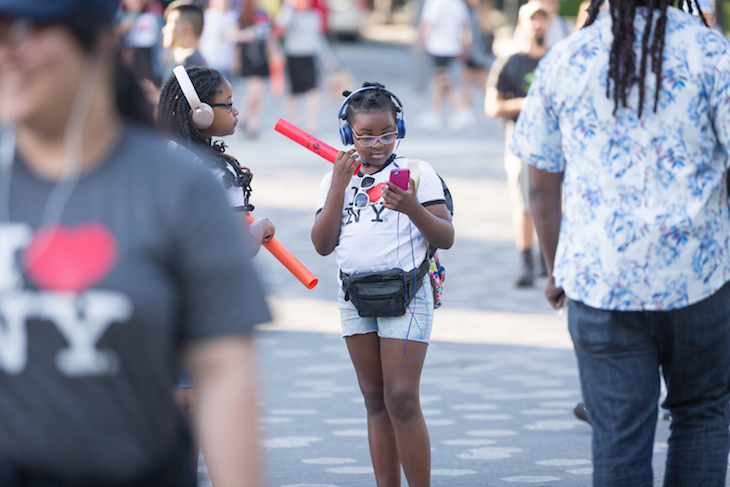 Our iOS and Android app powers the Mp3 Experiment. The app starts the audio track automatically at the right time and keeps everyone in sync. 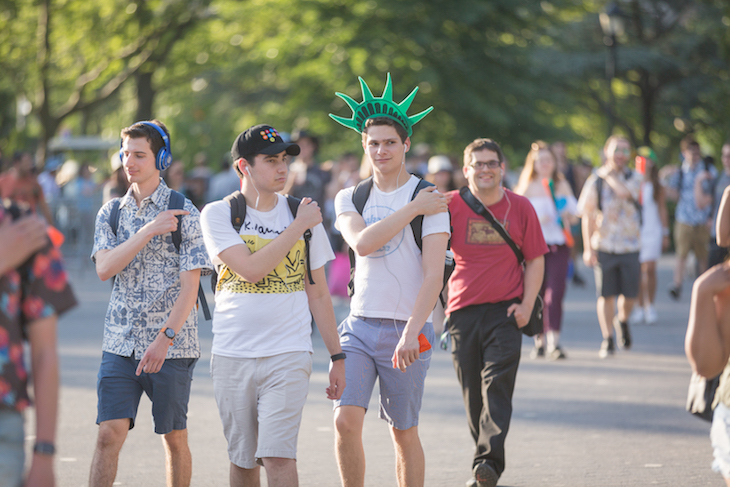 Participants give each other a secret signal by touching their shoulder. The instructions are delivered by narrator “Steve, the Omnipotent Voice from Above.” Participants spread out to all parts of the park. 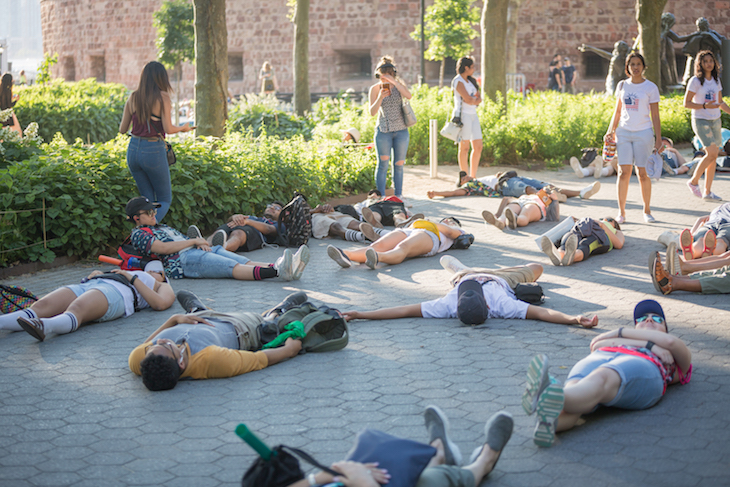 As always, part of the fun of the Mp3 Experiment is watching people who do not know what is going on react to our mob of participants. It was fun to watch people react as suddenly hundreds of people around them fell to the ground. 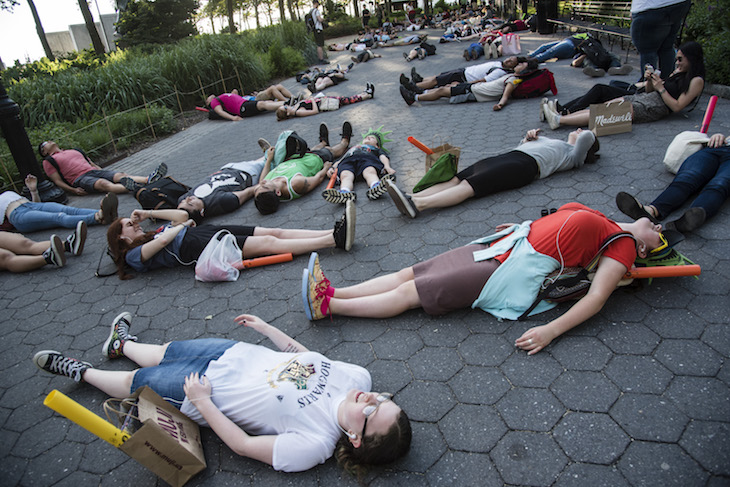 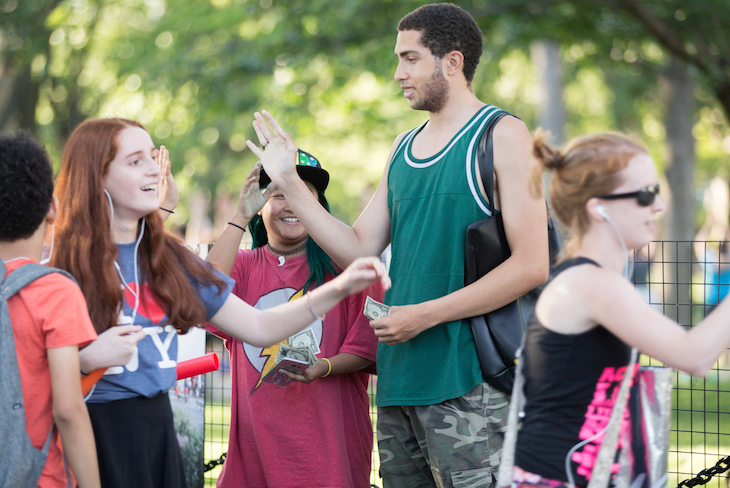 All participants were asked to bring a dollar bill to the event and then told to give it to a stranger not wearing headphones. We first tried this back in 2013 at the Mp3 Experiment 10 at the South Street Seaport. It’s probably my favorite Mp3 Experiment bit of all time, so we had to bring it back. Watching people react to a series of random people giving them money is the best. 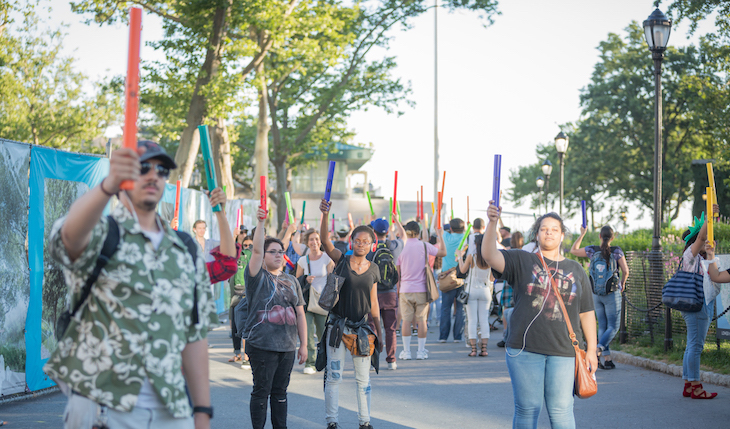 Participants took out their Boomwhackers and freeze in place, mimicking the human statues dressed as the Statue of Liberty that populate the park. 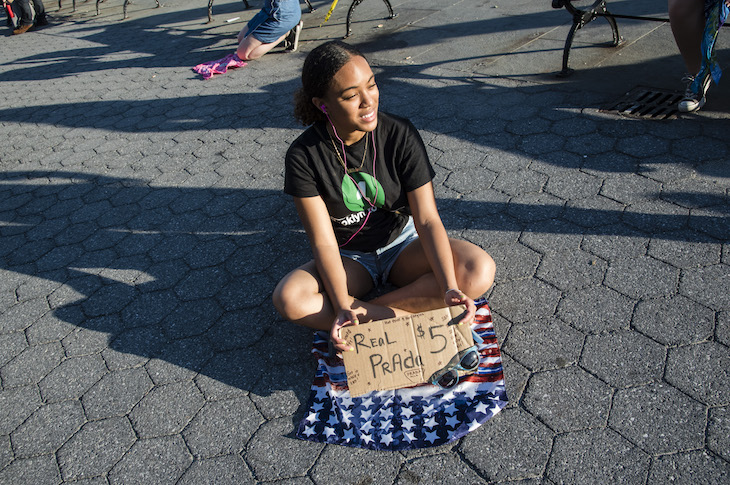 Battery Park is typically full of people selling bootleg items like fake handbags. So we asked participants to bring their own “bootleg item” to try to sell in the park. I think we all broke the law?? 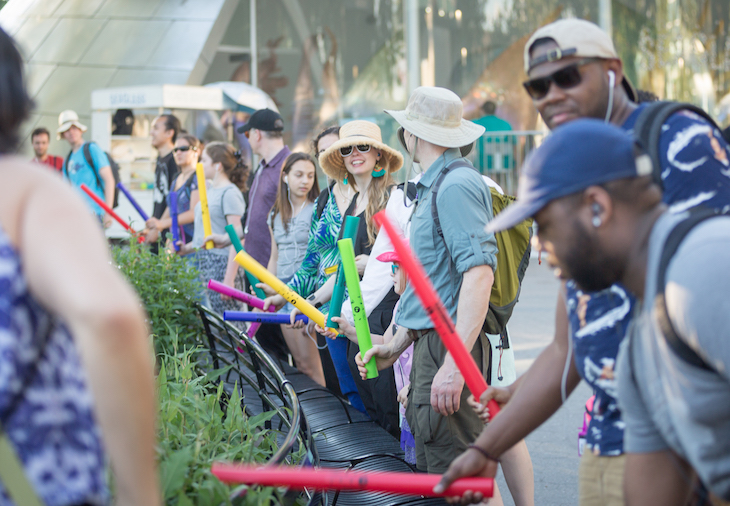 Participants making music with their Boomwhackers on metal benches. 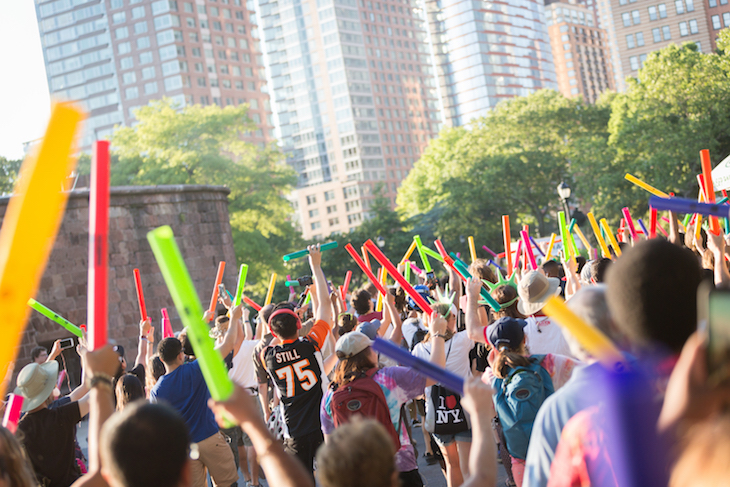 Participants walk over the Battery Oval, the huge lawn at the entrance to the park, to make music together as one big group. 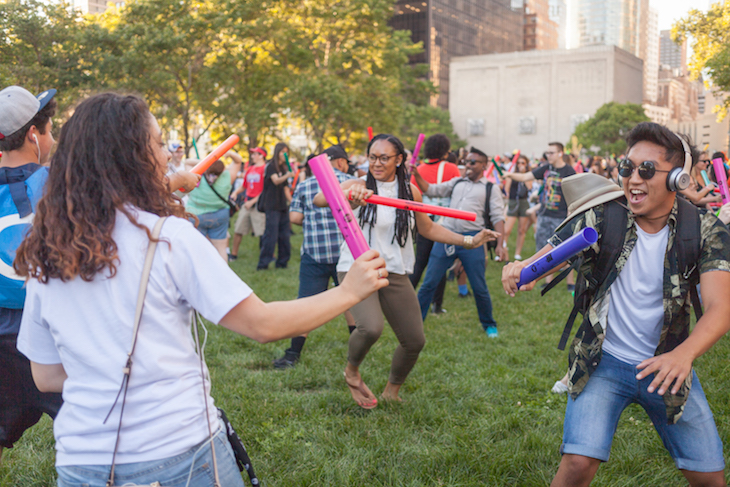 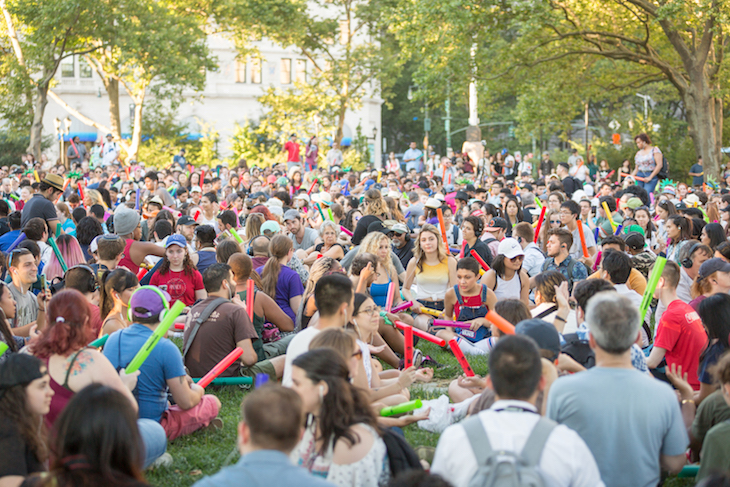 Participants all sat down in the middle of the lawn in a massive group and played specific chords together. We had 8 different Boomwhackers, and each played a different note. 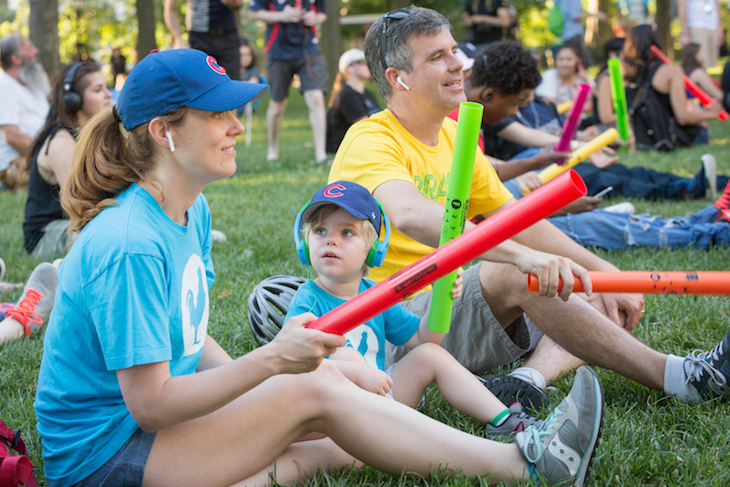 A VERY COOL family plays along. 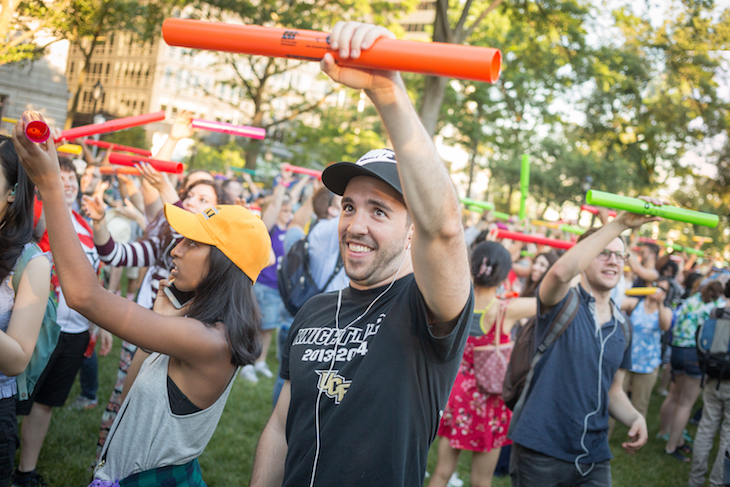 It was fun to come up with non-musical things we could do with the Boomwhacker prop. We realized a ping pong ball fit perfectly inside, and that unlocked a bunch of fun activities. The first involved participants trying to balance their ping pong balls inside the tubes. 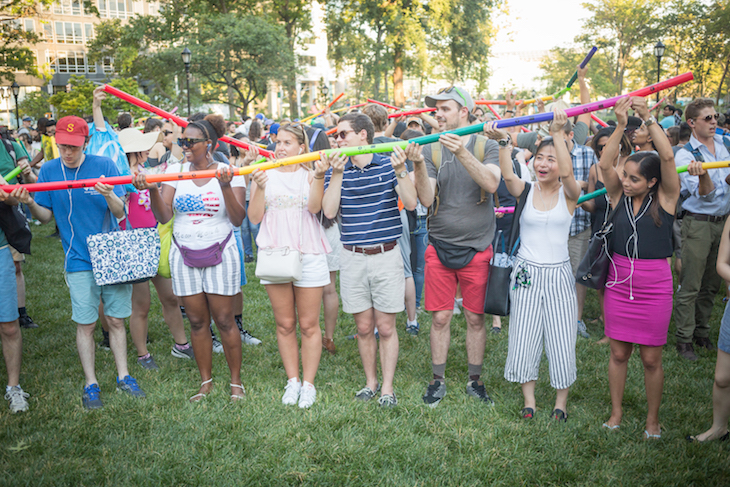 Participants then got together in groups of 8 (and then 16, and 32) and tried to send a ping pong ball through a series of tubes. Fun, silly teamwork with strangers. 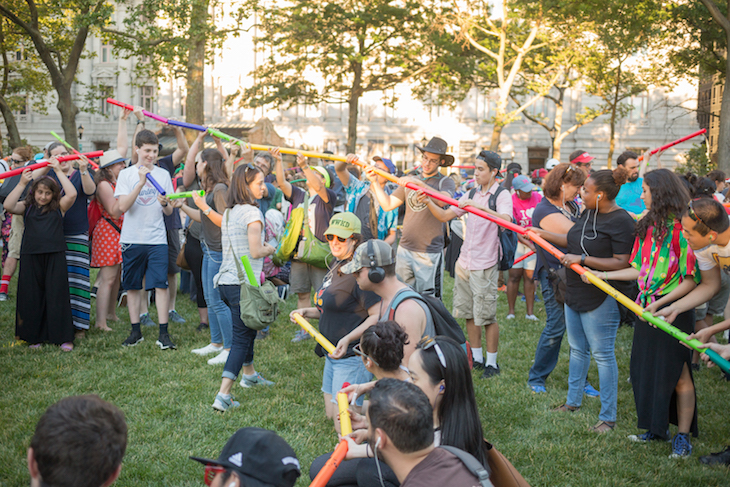 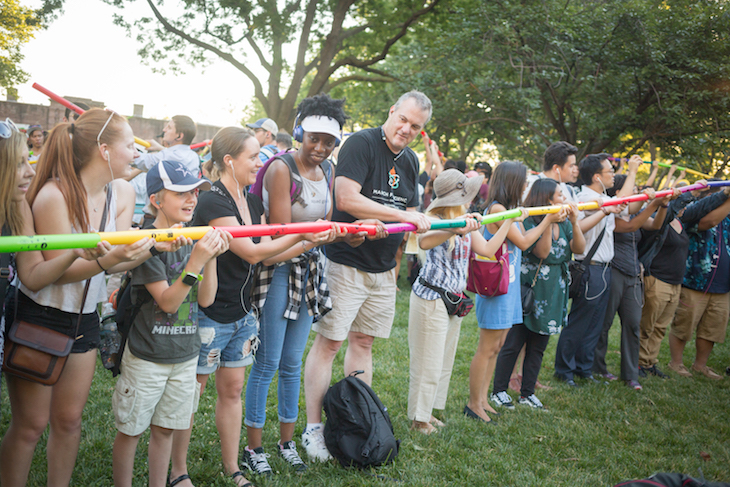 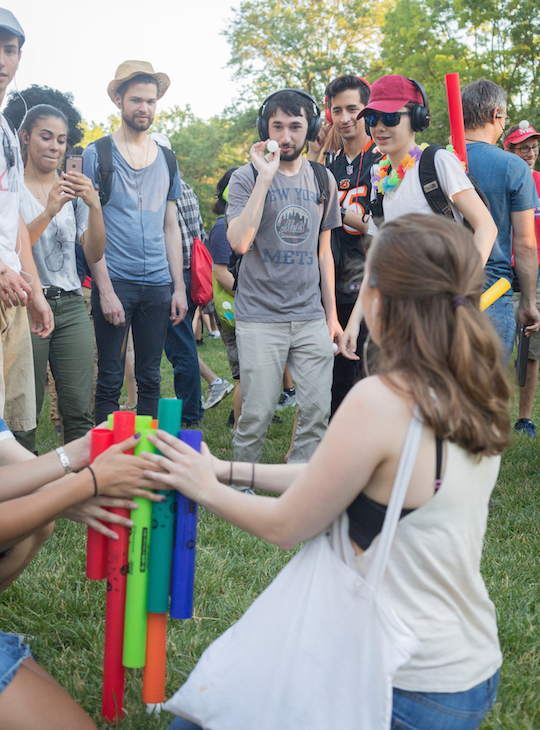 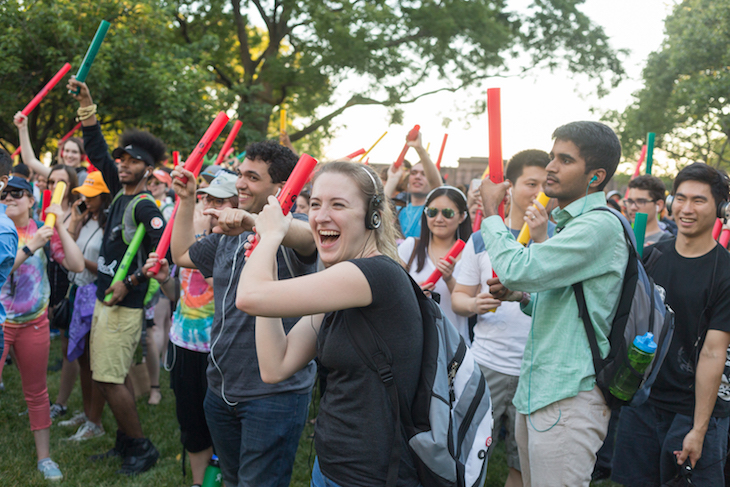 For the finale, we had an epic ping pong battle. The crowd was divided into two groups based on Boomwhacker color. The groups marched to different sides of the field and then launched ping pong balls at each other with the tubes. Thousands of ping pong balls flying through the air was quite a sight to see! 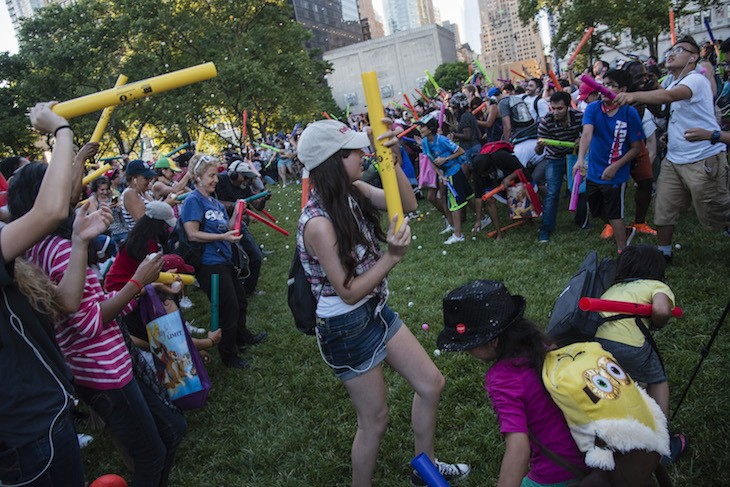 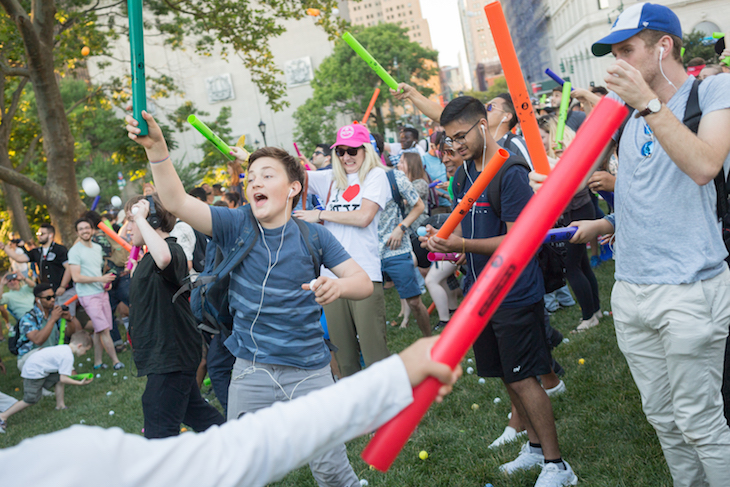 Thanks to everyone who came out! See you at the Mp3 Experiment 15 or one of our tour stops around the world.

Watch the videos of our previous 13 Mp3 Experiment projects.

Here are the official photos from our photographers:
– Photos from Arin Sang-urai