For our latest mission, thousands of people followed secret, synchronized instructions delivered via headphones on Governors Island in NYC. Participants started on the newly built hills section of the island and came together for a big election-themed celebration in the field below. The event was a surprise to everyone else on the island not participating. This was all part of our thirteenth annual Mp3 Experiment event.

Enjoy the video above first, and then go behind the scenes with our photos below. 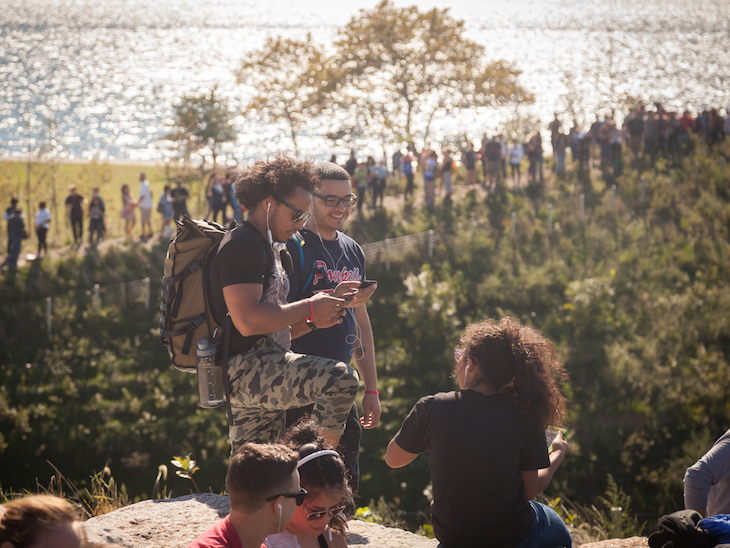 Participants were instructed to start on either Outlook Hill or Discovery Hill. The above photo was taken from Outlook Hill and you can see Discovery Hill in the background. We updated our iPhone app this year to streamline the process of synchronizing playback. The new app is pretty bare bones, but it does exactly what we need it to do; it downloads the audio file and plays it back in perfect sync with other participants. 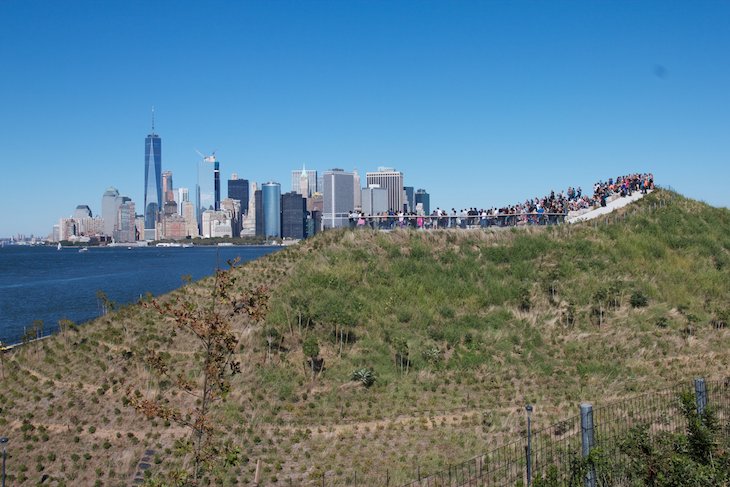 The view of Outlook Hill (and Manhattan) from Discovery Hill. 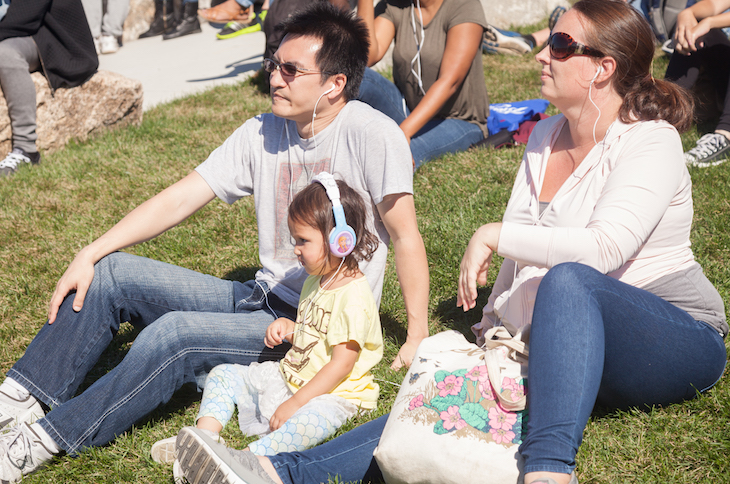 A family waits for the 3 PM start time. 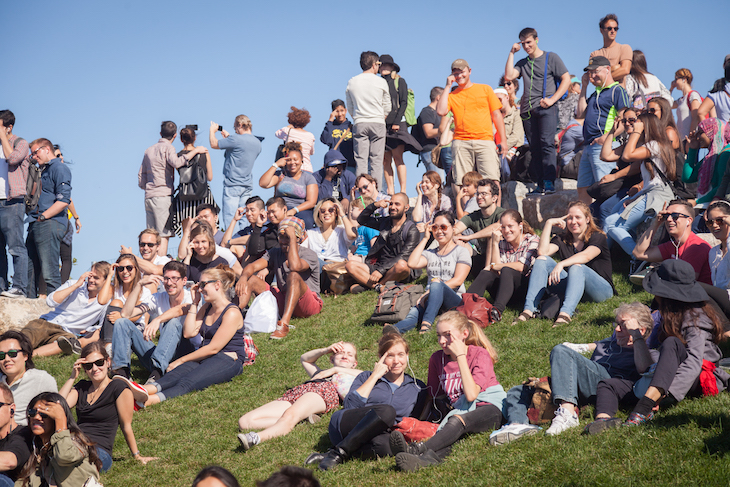 Participants give each other a secret signal by touching their eyebrows. The instructions are delivered by narrator “Steve, the Omnipotent Voice from Above.” 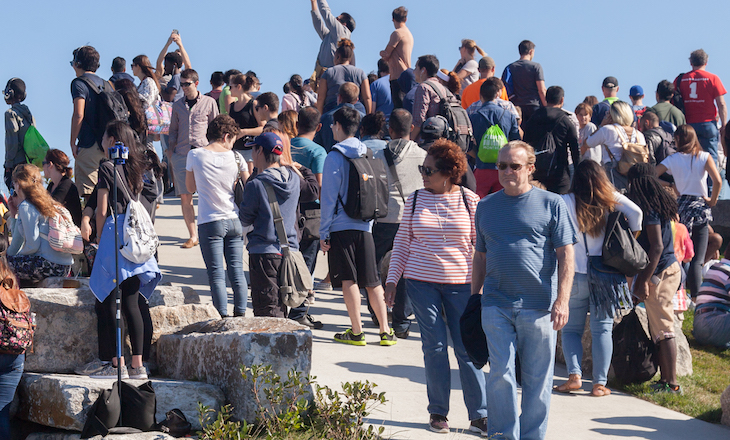 As always, part of the fun of the Mp3 Experiment is watching people who do not know what is going on react to our mob of participants. Imagine being the couple above when suddenly everyone else on top of the hill shouts, “Hello!” While this location was not filled with as many non-participants as some other spots we’ve visited in the past, it was fun to watch those not in on it try to figure out what was going on. 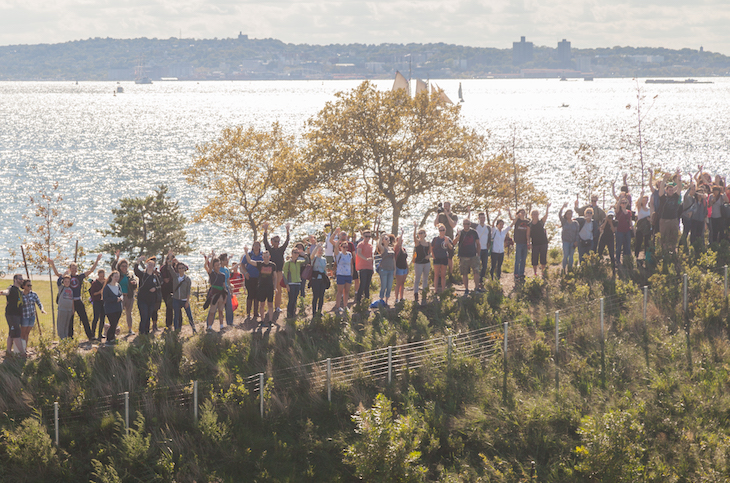 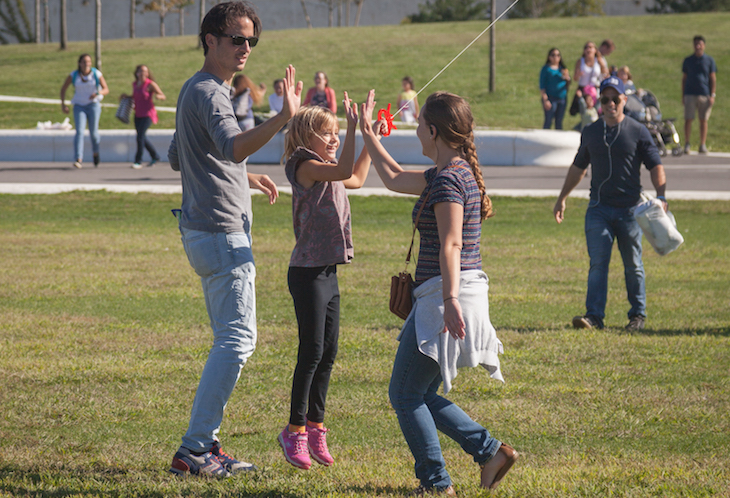 A participant following instructions to high five someone not wearing headphones. 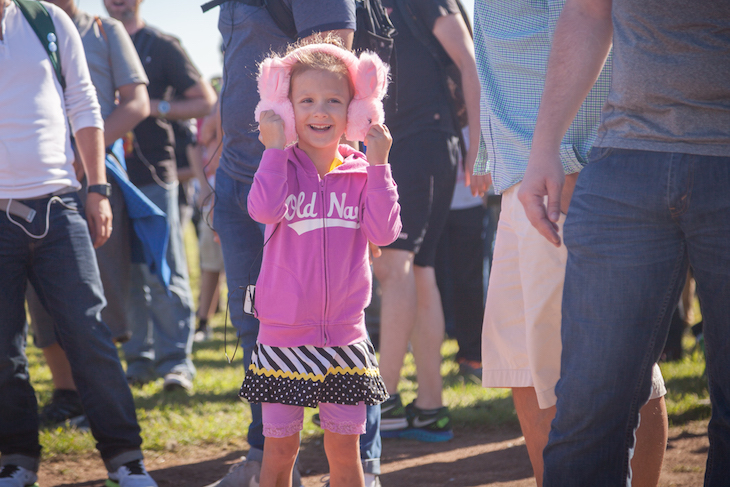 My vote for the coolest headphones of the day. 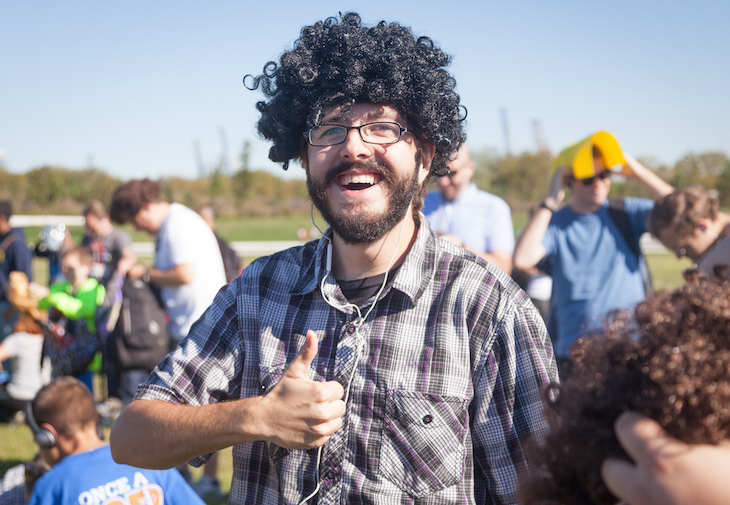 This year’s event had a political theme. The crowd was separated into two political parties, the Whigs and the Toupees. Participants were instructed to bring a wig to the event. 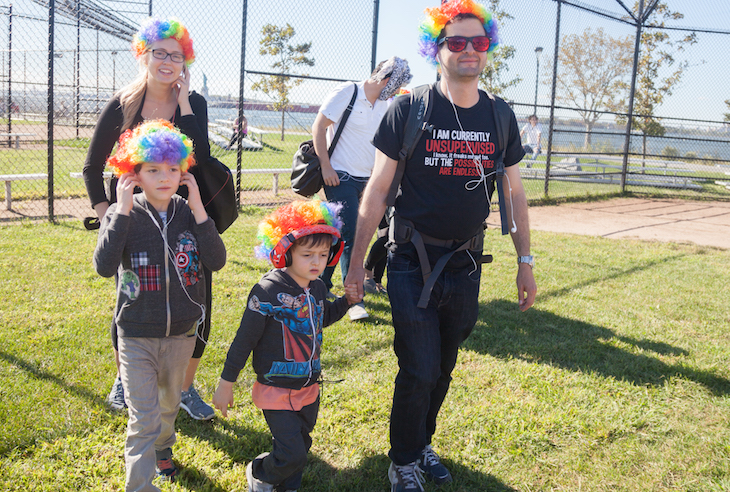 A family with matching clown wigs. 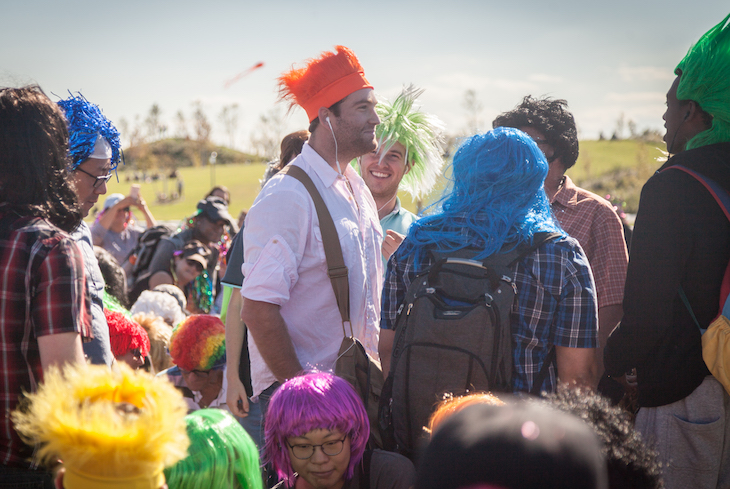 I know it’s silly to call something an “experiment” 13 years in, but each year we like to try out new things. This year we singled out two random participants and made them the stars of the event. The tallest guy named Mike and the shortest woman named Sara became the two “candidates” running for Governor of Governors Island. 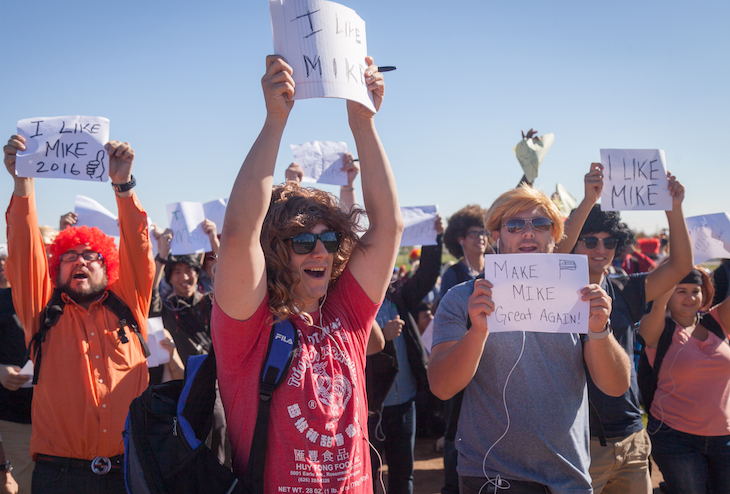 Other participants made campaign signs for Mike and Sara and held them up at the party convention. 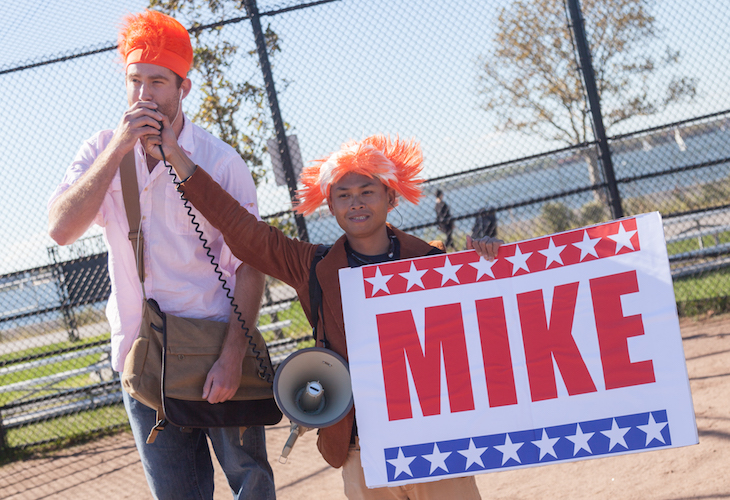 Mike and Sara were then given megaphones and Steve instructed them to make 10-second acceptance speeches. Sara promised a holiday on every Monday. Mike gave a fiery speech where he went negative on Sara and promised a “vote for Mike is a vote for America!!” 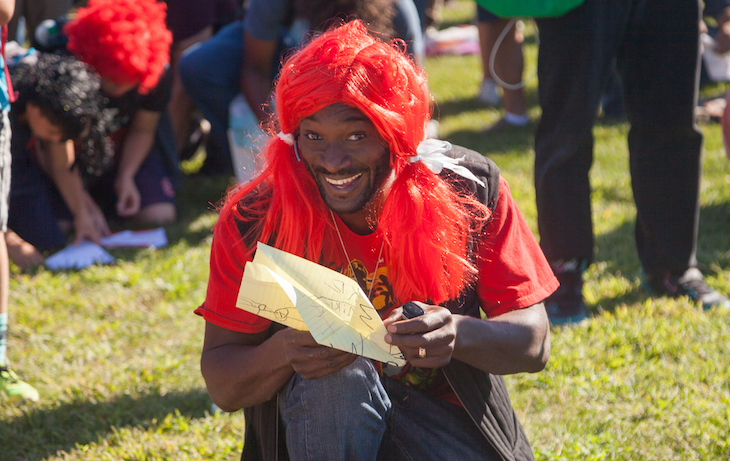 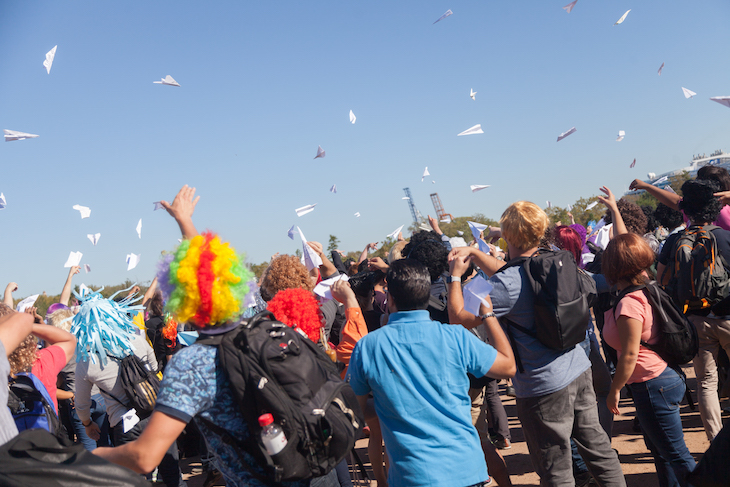 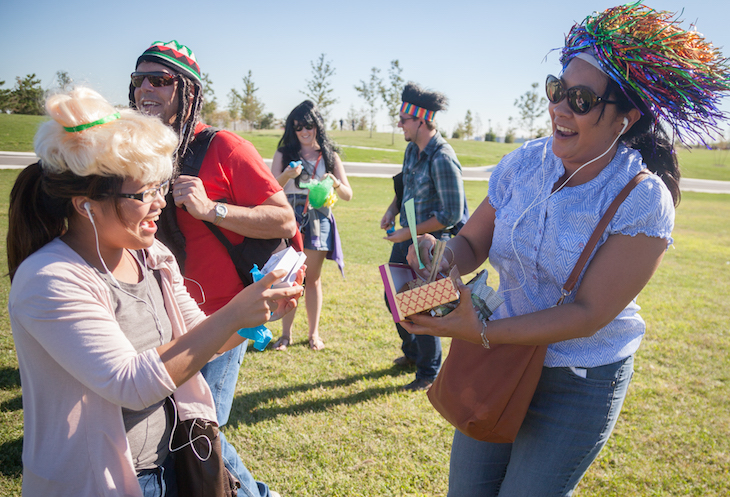 After a campaign-themed game of freeze tag, it was time for political bribes. Participants were instructed to bring a small gift (something from their home that they no longer wanted, but thought someone else might.) They were asked to find someone of the other political party and exchange gifts (or bribes.) 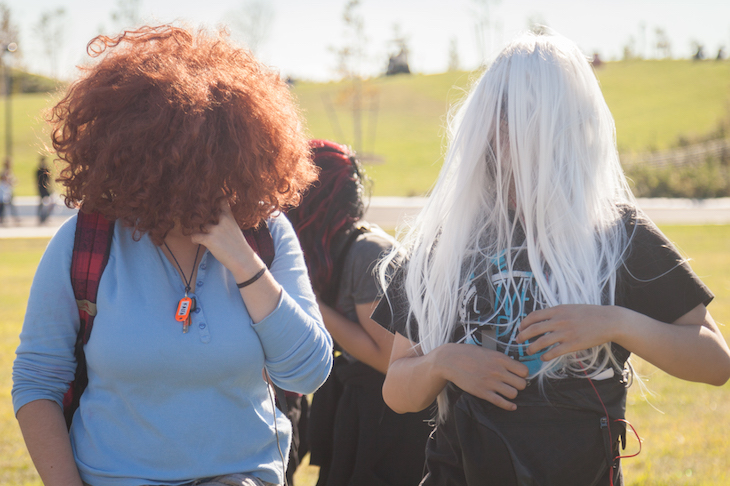 After the bribes it was time to vote, participants were instructed to turn their wigs backwards and raise their hand for the candidate they wanted to win. If the gift you received was better than the gift you gave, you were supposed to vote for the other party. 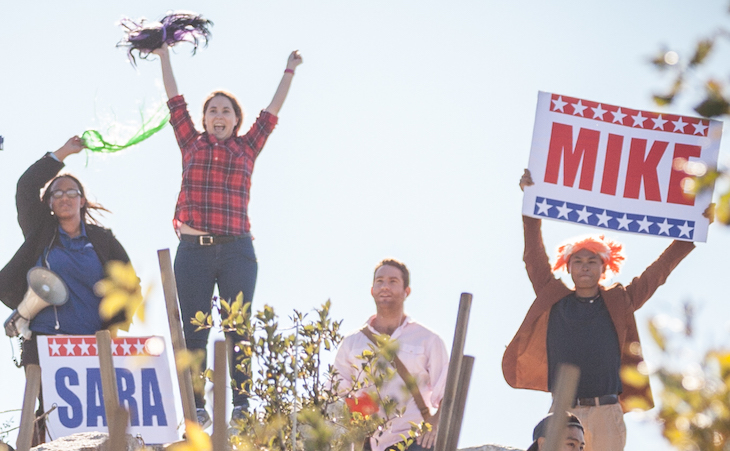 Steve “counted” the votes and revealed that Sara won! The two candidates could be seen on the top of Outlook Hill as they heard the results. 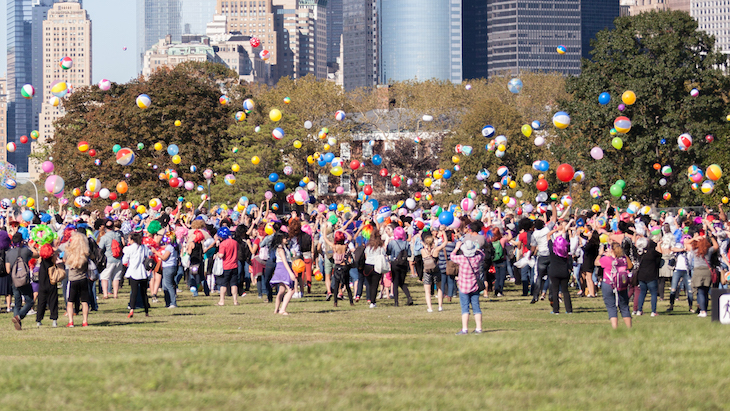 Sara’s victory was celebrated with a huge beach ball party. Participants were told to bring an uniflated beach ball to the event. 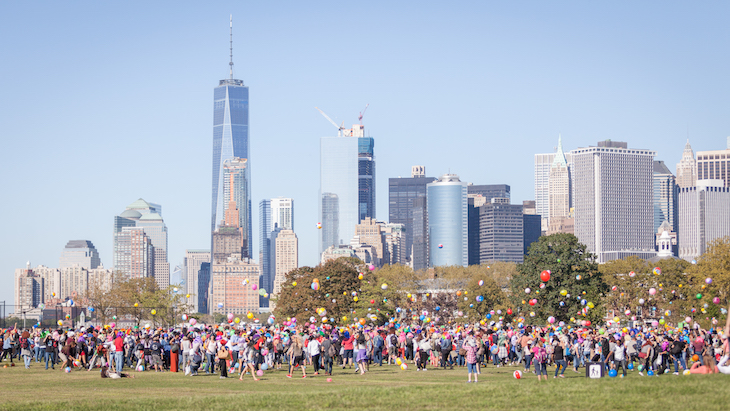 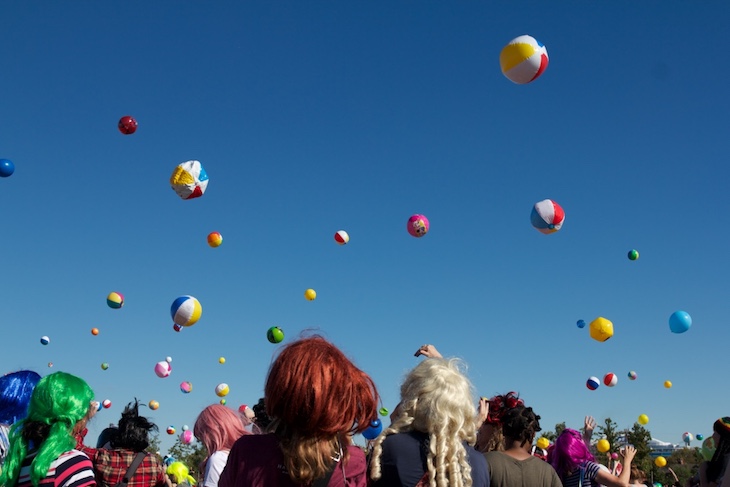 For the final activity, Steve asked the participants to toss their wigs in the air, which was surprisingly colorful and cool looking. 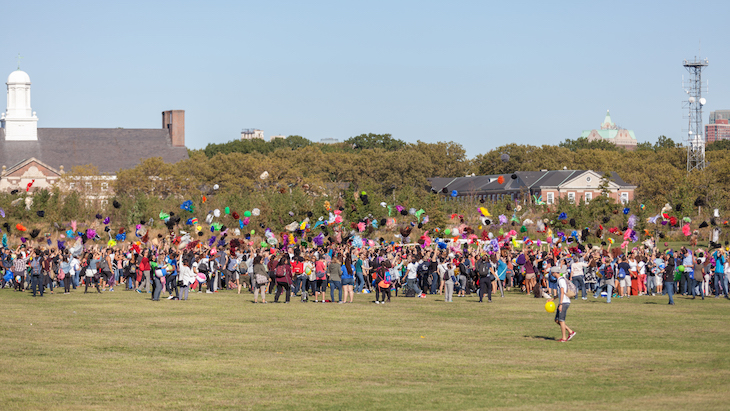 Thanks to everyone who came out! See you at the Mp3 Experiment 14 or one of our tour stops around the world.

Watch the videos of our previous 12 Mp3 Experiment projects.