For our latest mission, we gave random New Yorkers the opportunity to give an inspiring commencement address. We set up a commencement ceremony in Bryant Park with graduates, faculty, and a lectern. The only thing missing was the speaker. A guy posing as the dean of the school recruited random people with hand-written sign that read, “commencement speaker needed.” 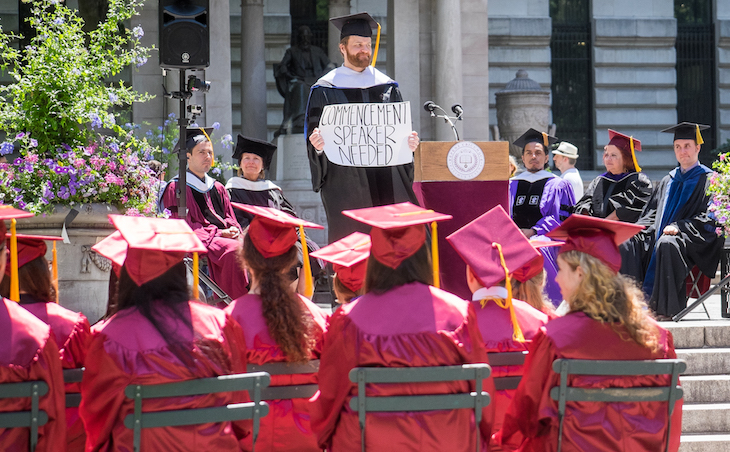 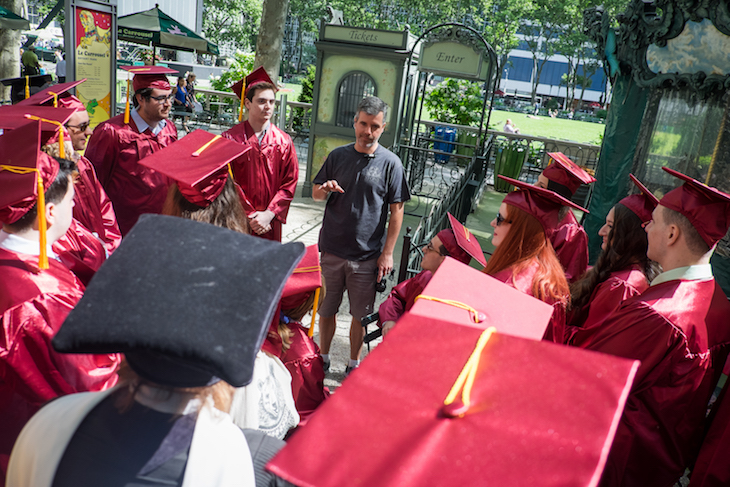 We recruited college-aged participants off of the Improv Everywhere email list to play the graduates and rented matching caps and gowns for them. 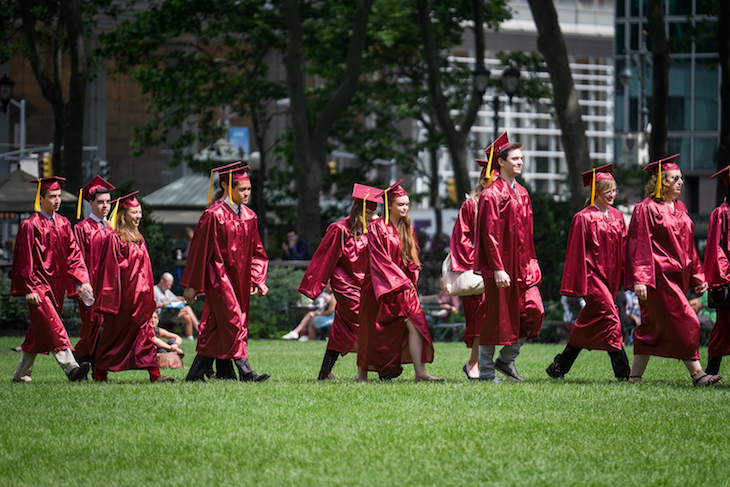 The graduates marched the length of the Bryant Park lawn to take their seats. 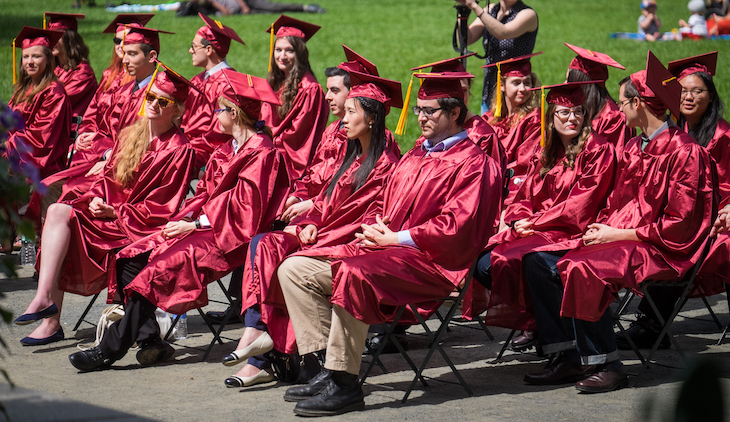 The graduates sit and wait patiently for a speaker. 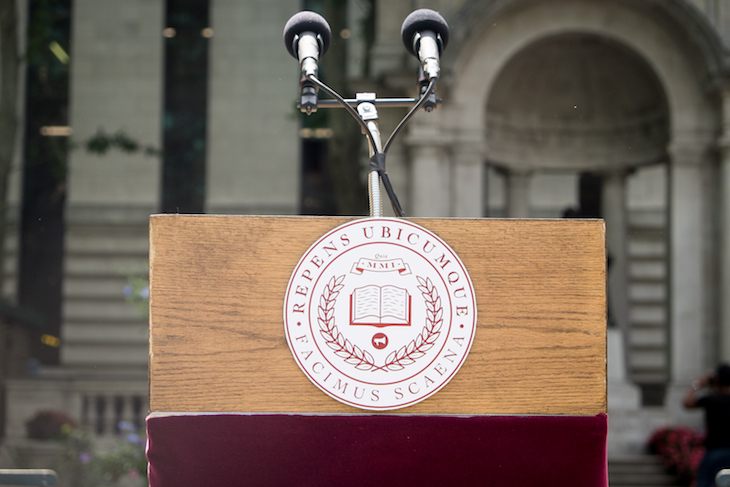 You may recognize the lectern we used from our Say Something Nice project. Agent Steve Dressler designed a school seal for us. There are some easter eggs there for those of you who read Latin. 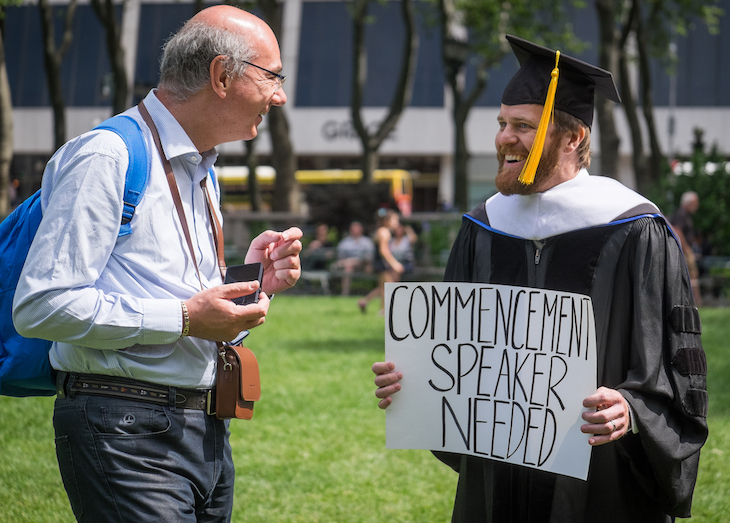 Agent Ryan Karels played the dean of the school and walked around the park recruiting strangers to speak. (You may remember him from last year’s Pizza Party Train mission.) He explained that the school’s scheduled speaker (John Kerry) had missed a flight and that he really needed someone to help out and speak to the graduates, even if just for a few seconds. If asked, Ryan said the name of the school was “Big Apple University,” which was the best fake but maybe kind of real sounding school name we could think of five minutes beforehand. 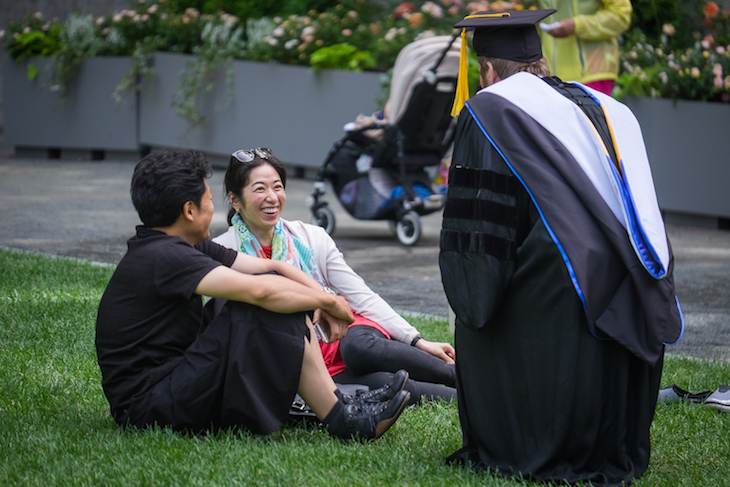 It took a bit of asking, but before too long people started saying yes. 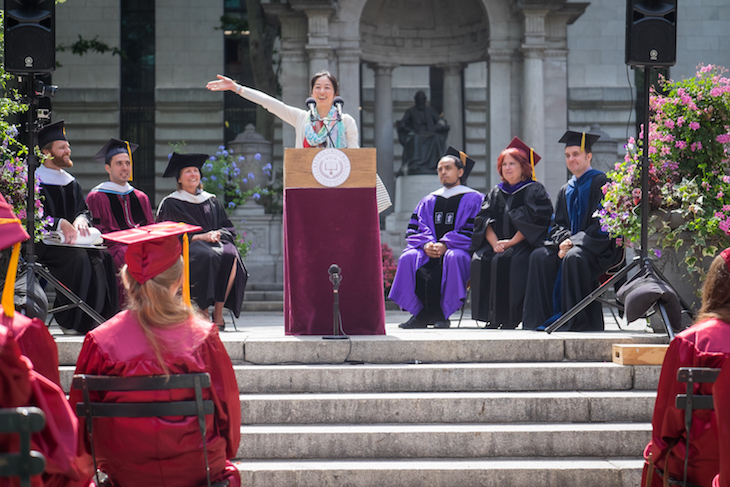 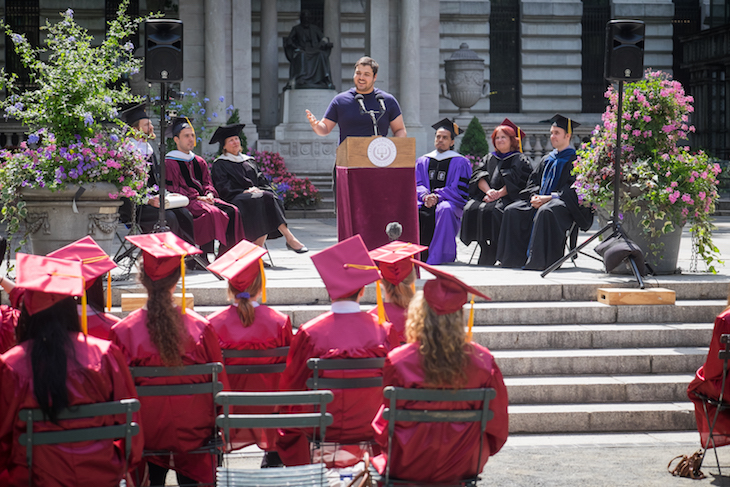 Some people took it seriously and seemed like the believed it was an actual graduation ceremony. Others got the joke but still gave the most inspiring speech they could give. Everyone had fun with it. 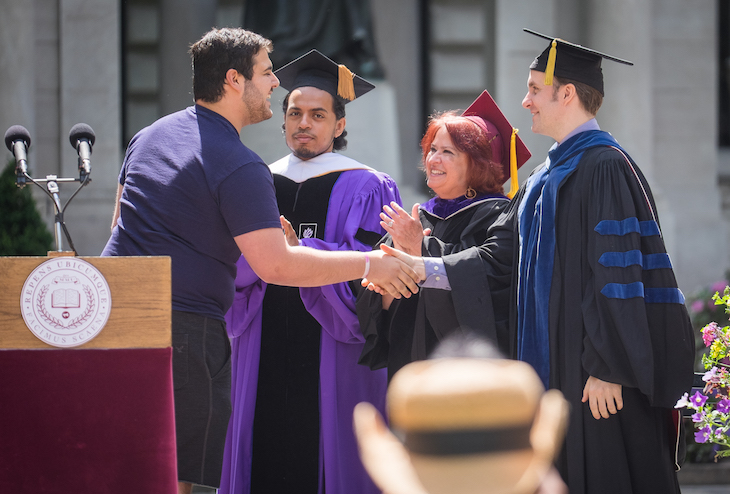 We also had six people playing the school’s faculty dressed in academic gowns and sitting behind the speaker. The were on hand to shake hands with the speaker during the inevitable standing ovation. 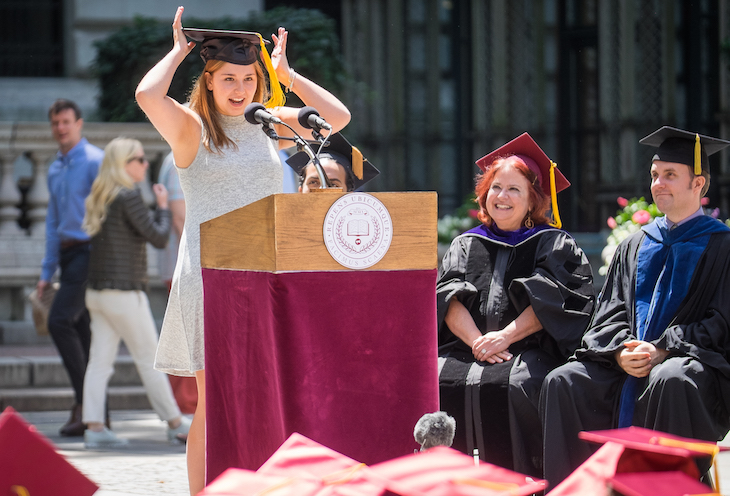 Some people chose to wear the provided cap. 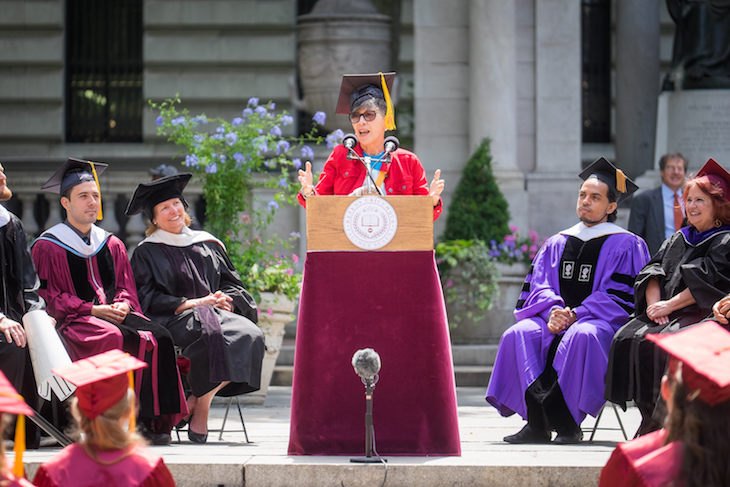 This woman gave her speech in Spanish. She claimed she didn’t speak English when Ryan recruited her, but after she went she said in perfect English, “You tricked me so I tricked you!” 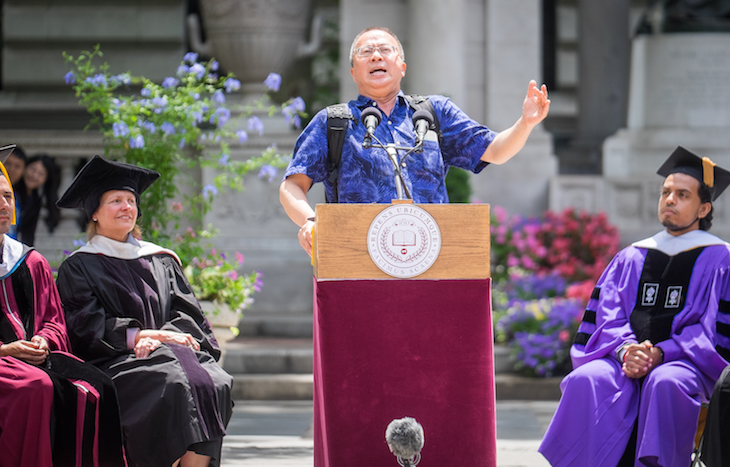 This guy gave a speech and later came back and sang a song. I think he was an opera signer. 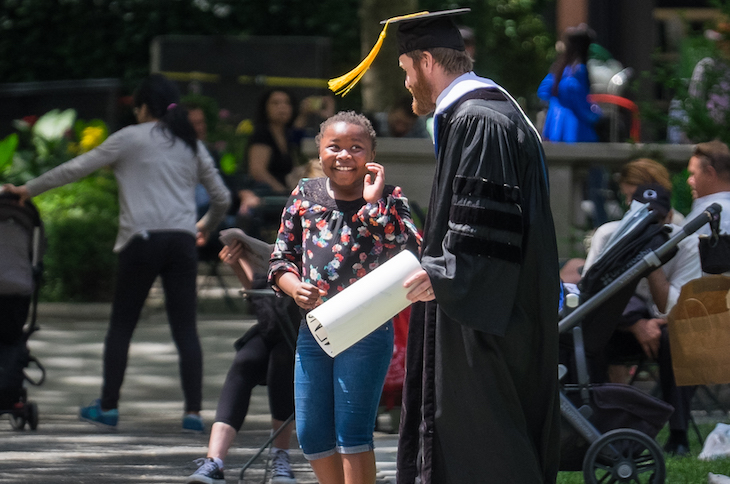 This young girl agreed to speak but got increasingly nervous as she neared the lectern. 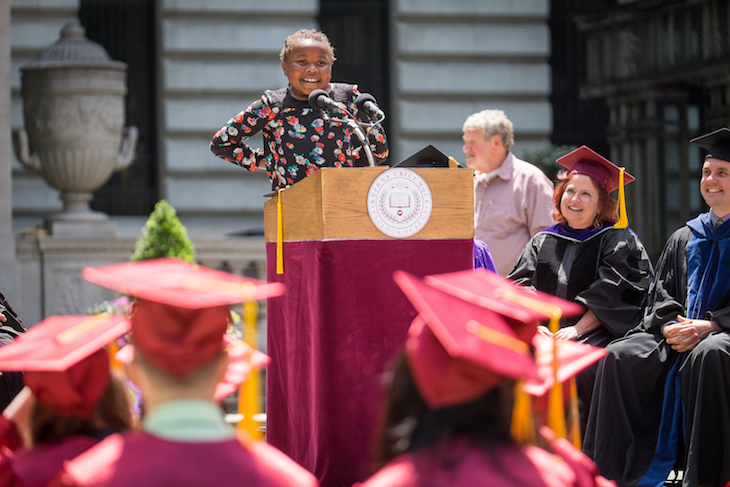 But she did a great job! 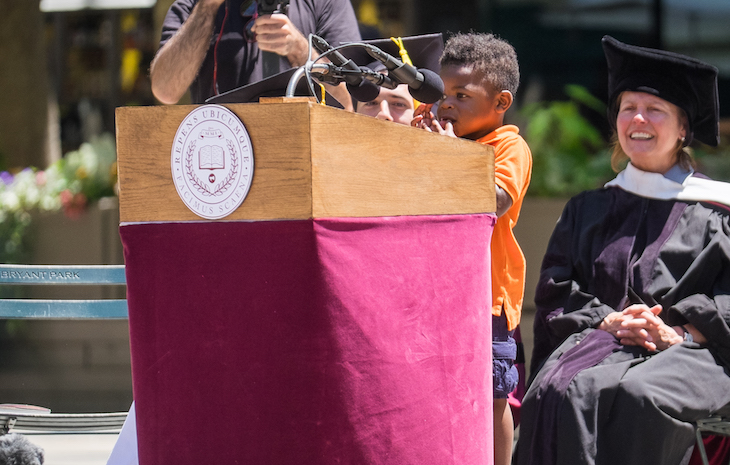 …and she talked her younger brother into doing it too.

Thanks to everyone that spoke, and congrats to our fake graduates!