For our latest mission, over 4,000 people pressed play simultaneously and listened to an mp4 file filled with ridiculous instructions. Participants were instructed to pack a bag with LED lights, reflective vests, and glow sticks and to sit underneath the trees surrounding Prospect Park’s Long Meadow at sunset. The event was a surprise to everyone else in the park. This was all part of our twelfth annual Mp3 Experiment event. The year’s event marked the first time we used an .mp4 file, which included a colorful video component.

Enjoy the video above first, and then go behind the scenes with our photos below. The Mp3 Experiment Twelve was produced in partnership with the Prospect Park Alliance as part of the BEAT Festival. Thanks to our partners! 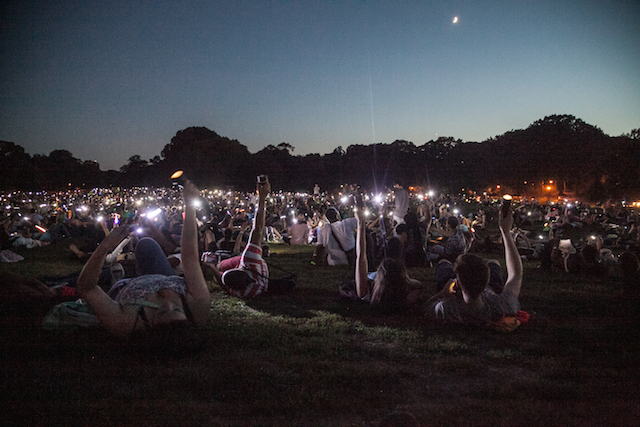 Four years ago we staged our first night time Mp3 Experiment. It was so much fun that it’s taken great patience not to immediately do it again. We felt like enough time had passed that it was time to give it another shot and see if we could make it even better. 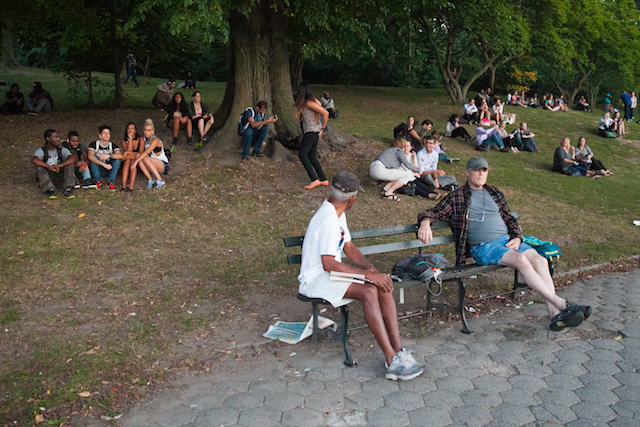 This was by far the largest space we’ve ever staged an Mp3 Experiment. The Long Meadow in Prospect Park is so huge that it’s hard to really see the scope of how many people are participating. It had the nice effect of being more of a sneak attack at the start, particularly for those that started on the southern part of the meadow, further from the subways. Participants were instructed to begin the event by sitting underneath one of the many trees that surrounds the meadow. 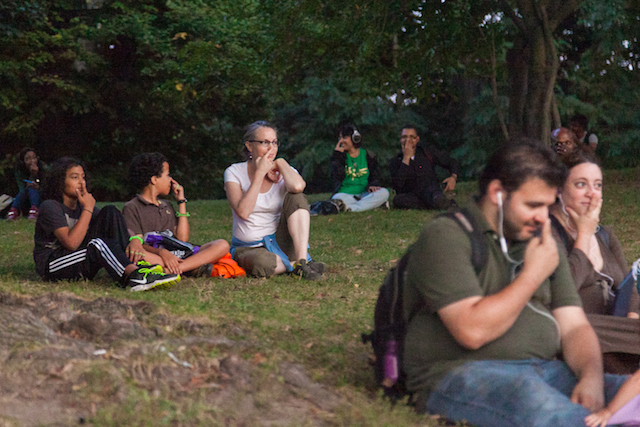 It was a lovely, mild evening, and our participants blended in well with the families out picnicking at sunset. At the appointed time, we all pressed play. The first activity was to touch your nose, to give each other a signal of who was participating. 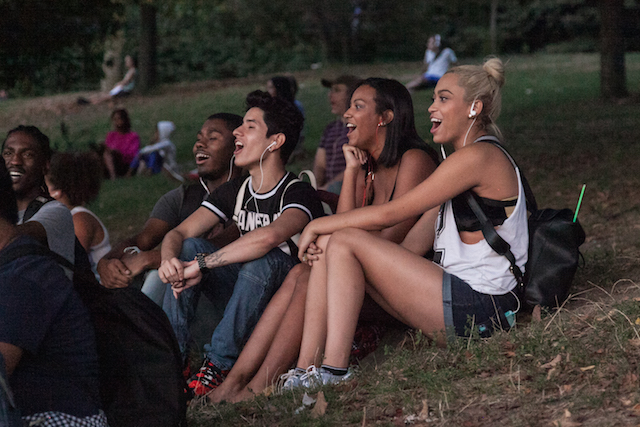 The first big moment was when the audio narrator, Steve, instructed everyone to begin singing the same note. All at once, thousands surrounding the meadow belt out the note, much to the surprise of everyone else in the park. 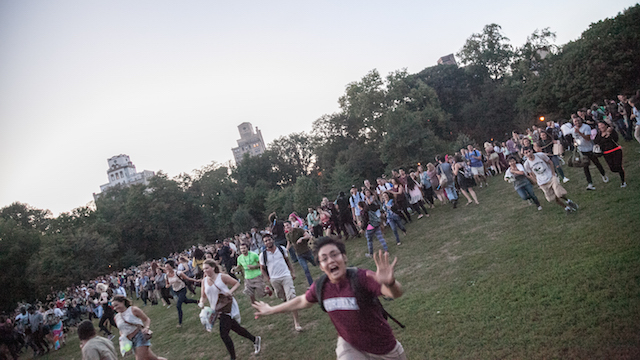 Participants were then told to make a mad dash across the meadow, switching places with those on the other side. This was the first moment you could tell the scope of the event. While it may have looked like just a couple of hundred people were participating in your area, while running across the field it became clear that we were a mob of thousands. 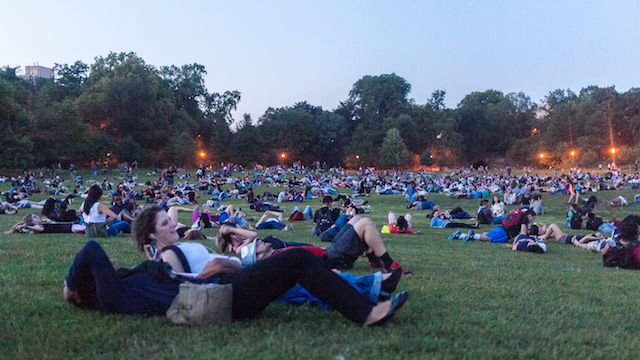 A game of freeze tag followed (“People wearing glasses are it!”) and then Steve asked everyone to drop to the ground for “naptime.” A “Movie Simulator” activity came next, with participants acting out scenes from Spartacus, Rocky, Indiana Jones, LOTR, The Matrix, Ghostbusters, and finally a flashlight-powered Star Wars lightsaber battle. Hmmm… what do those movies have in common? 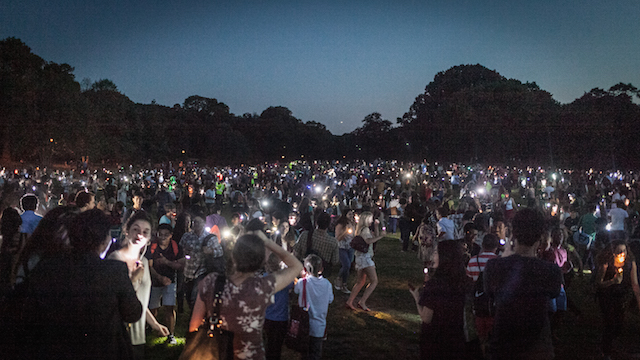 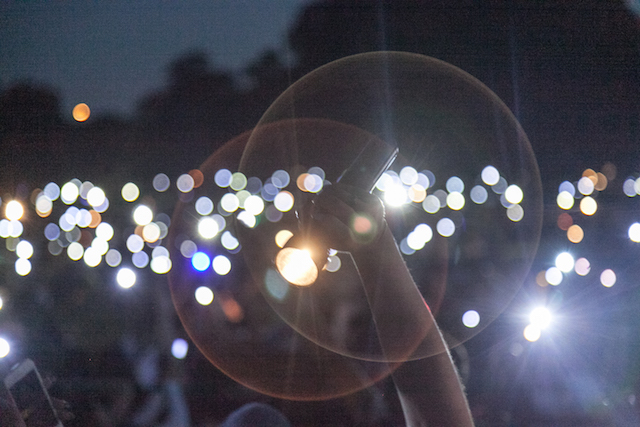 As the lightsaber battled raged on the dusk began to fade away and the park was truly dark. Time for the Celebration of Lights! 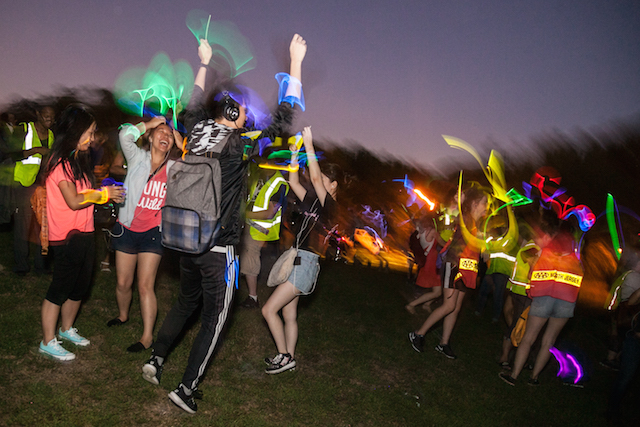 The night time portion included an extended bit with participants waving their flashlights around while lying on the ground, putting on reflective vests, taking out glow-in-the-dark items, and having a glow stick and LED-light-powered dance party. 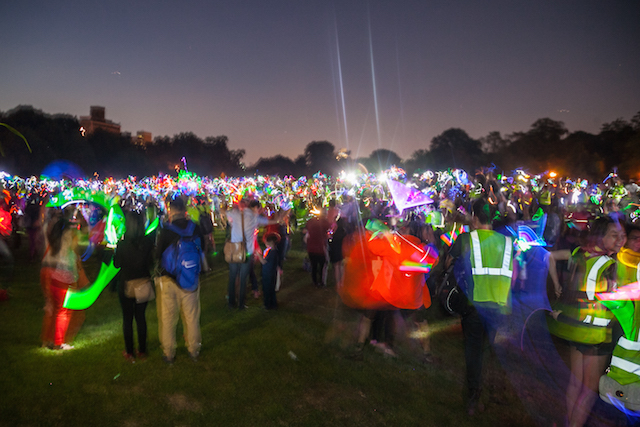 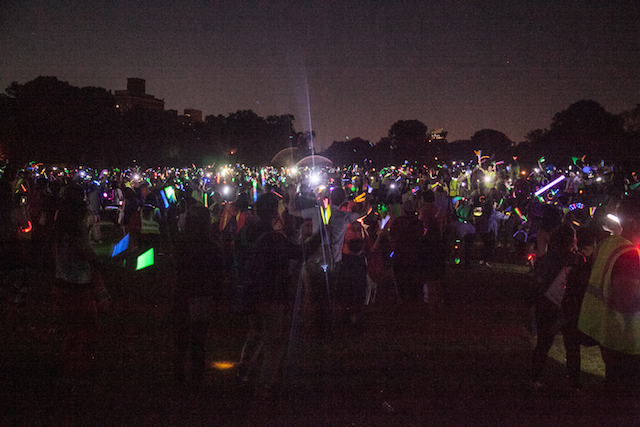 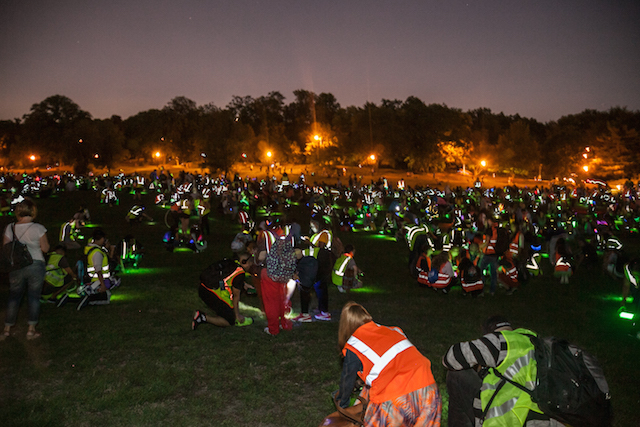 Near the end of the experiment, participants were asked to take their phones out of their pockets and turn their screens on. The .mp4 file they were playing included a colorful display of lights. In the above photo participants are pointing their phone down towards the grass as a green light glows. 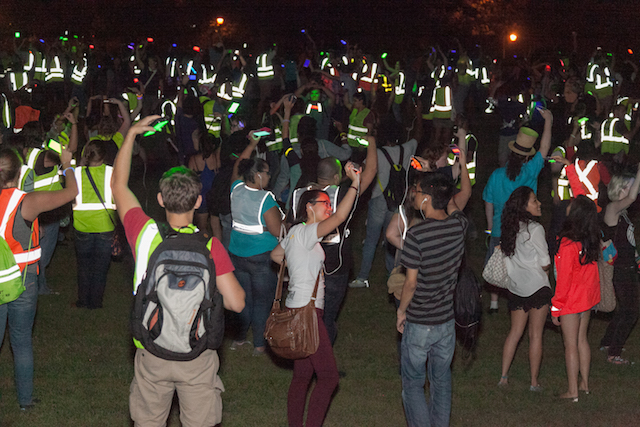 Participants holding their phones in the air. 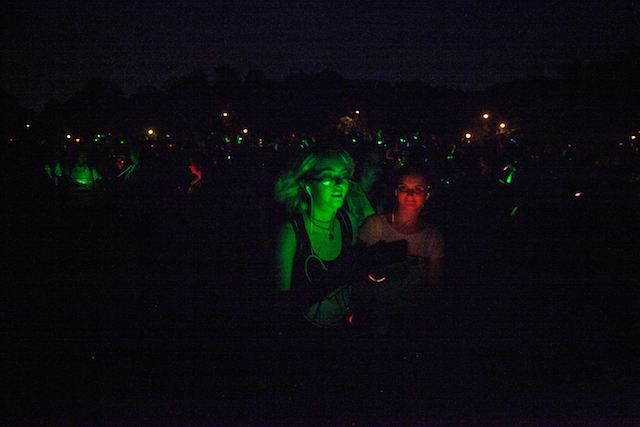 The video portion also included a game of red light / green light. Everyone moved when their screen was green and froze in place when it was red. 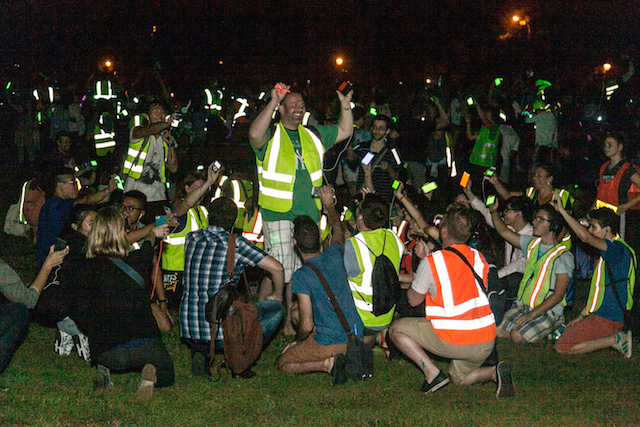 Another activity included everyone shining their screens at the tallest person in their area as that person danced. 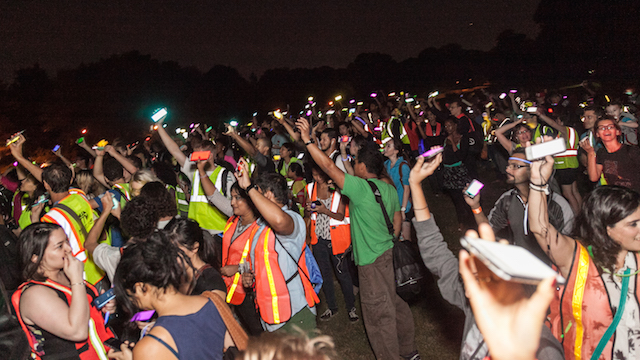 For the final activity we reprised the external audio activity from last year. Participants unplugged their headphones and played the audio through their phone speakers. Tyler Walker composed an awesome piece that sounds pretty boring by itself, but was designed to sound beautiful when played by thousands of not quite in sync devices.

Thanks to everyone who came out! See you at the Mp3 Experiment 13.

Watch the videos of our previous 11 Mp3 Experiment projects.