For our latest mission, six groundskeepers tending to the Bryant Park lawn suddenly transformed into tumblers and acrobats, surprising everyone in the park with an unexpected routine. After their brief performance ended, the groundskeepers immediately went back to their lawn work.

This project was a collaboration with YouTube’s new Field Day channel. Check out our video on the Field Day channel that features parts of this mission as well as two upcoming missions we’ll be releasing later this summer. 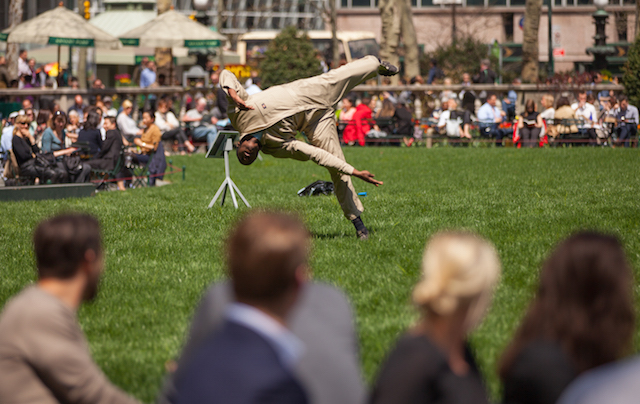 For our collaboration with YouTube’s new Field Day channel, we were challenged to do something above and beyond what we normally do. We decided to take it as an opportunity to collaborate with some new performers who have skills our normal crew doesn’t have. Using the NY email list, we sent a notice that we were looking for tumblers and gymnasts. Things really came together Madeline Hoak got in touch and let us know that she had participated in a few Improv Everywhere things in the past and could help put together a crew of acrobats. We met the performers for a rehearsal at The Muse, a new rehearsal and performance space for circus arts in Brooklyn. 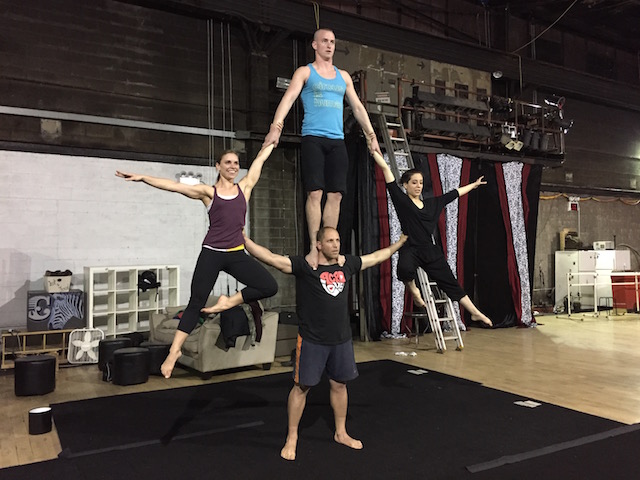 At rehearsal we put together a routine with Madeline’s collaborators (Sam Stage, Angela Buccinni, and Yoni Kallai) and two additional responders from our mailing list, Milan Bailey (skilled in parkour) and Daniel Cayre (tumbler/gymnast.) We were in awe of everyone’s talent and how quickly they were able to put something together. 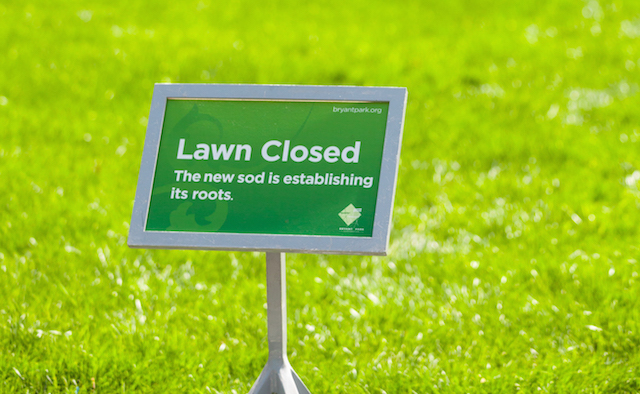 Bryant Park was VERY generous to let us perform on their not-yet-open lawn. They take very special care of the lawn as they get it ready for the season, and it was an honor to be allowed to perform on it before it was open. Bryant Park has been a great friend to Improv Everywhere over many years. We’ve had much fun with Mp3 Experiments, carousel horse races, and ice skating surprises in their park. 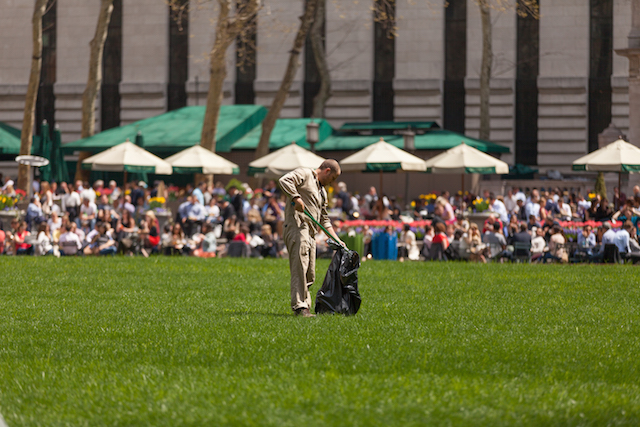 The six performers dressed as groundskeepers and spread out on the lawn. They worked for about ten minutes before the performance started– blending in and actually picking up leaves. 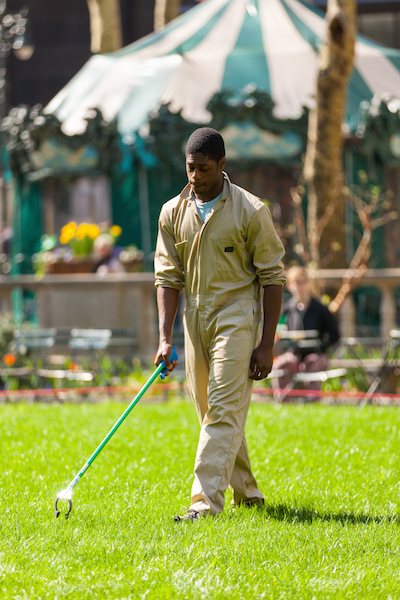 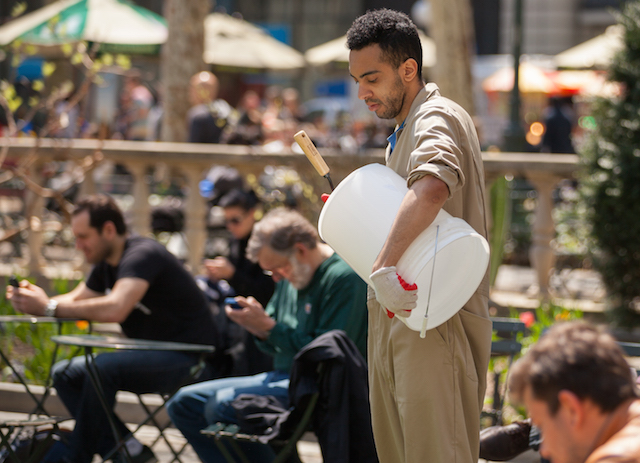 The seventh undercover performer was our drummer Nathan Ellman-Bell. He kicked off the performance when he began to drum on a bucket with a garden shovel. 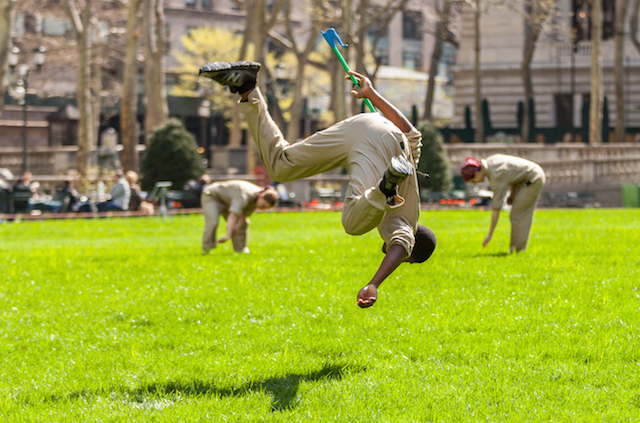 Agent Bailey was the first to break into the routine, suddenly flipping with his grabber tool still in hand. 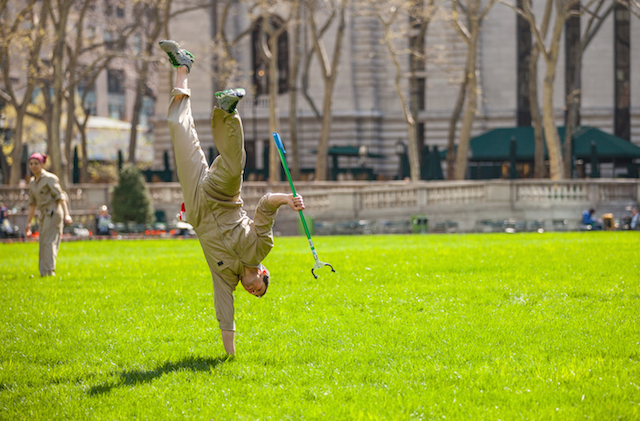 Agent Cayre joined in next. 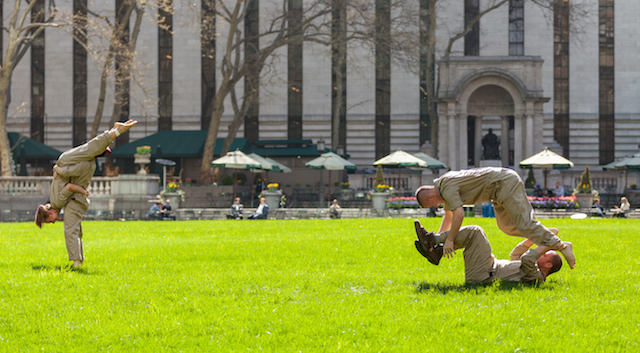 The four acrobats join in. 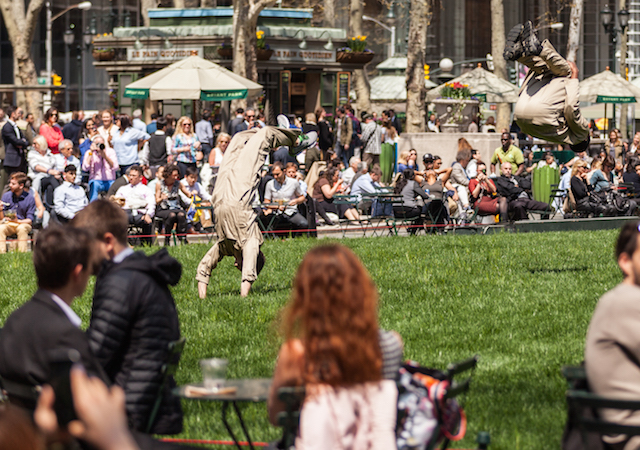 As this was during lunch time on a beautiful day in the park, there was a massive crowd of people sitting on the perimeter of the lawn. It was really fun watching more and more of them turn their heads and smile as they realized what was going on. 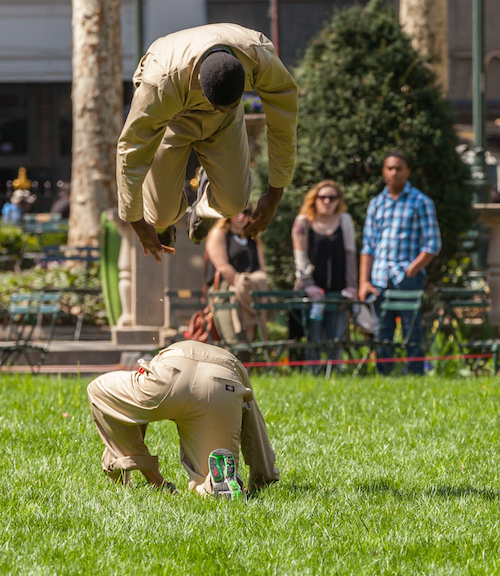 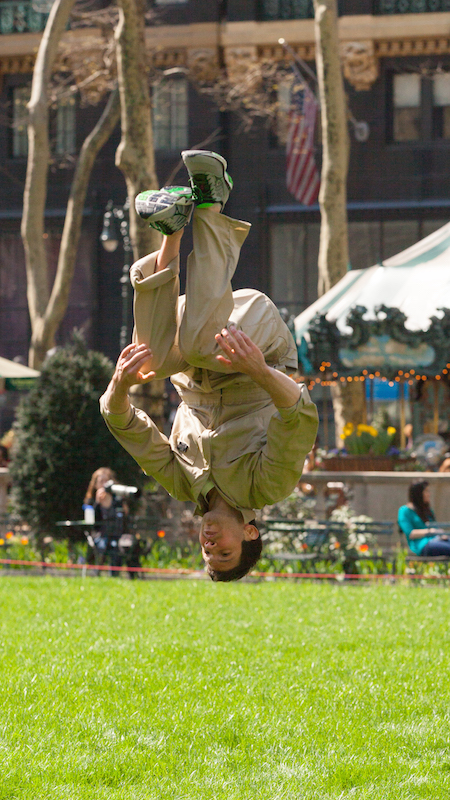 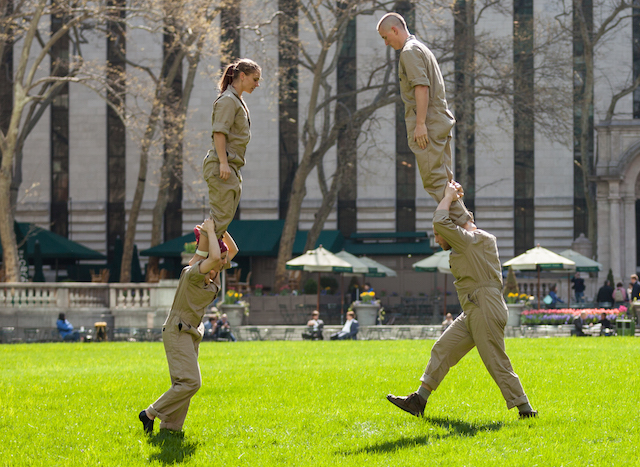 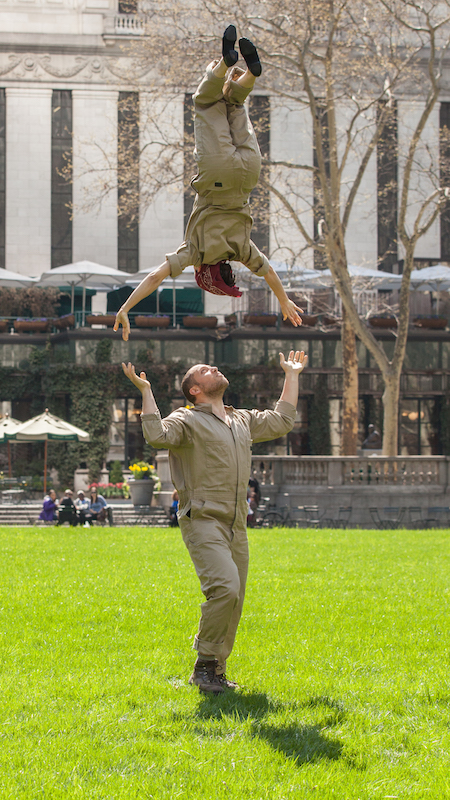 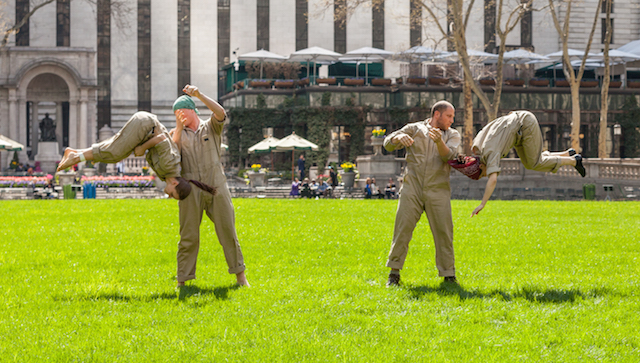 The performance heightened as it went along, with the acrobats doing more and more impressive moves. 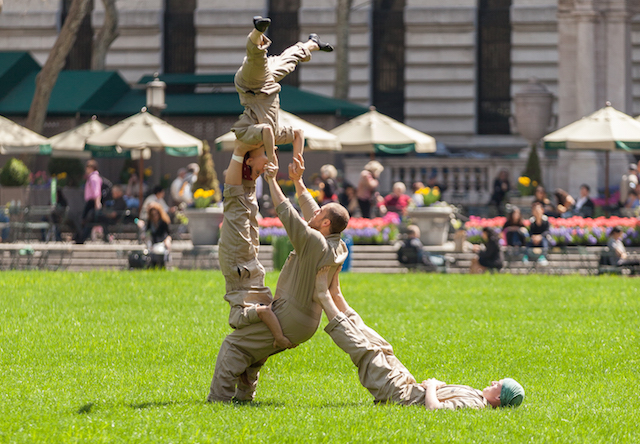 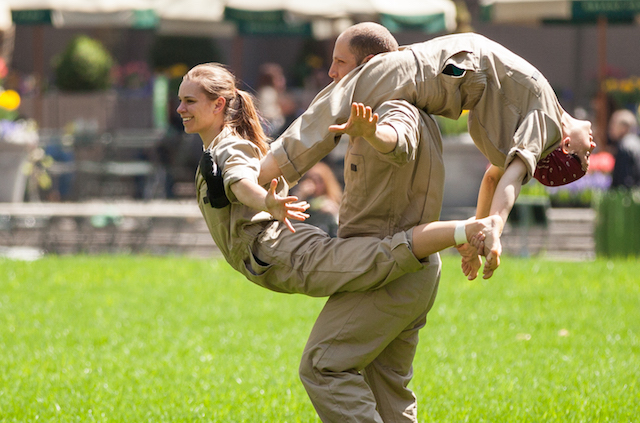 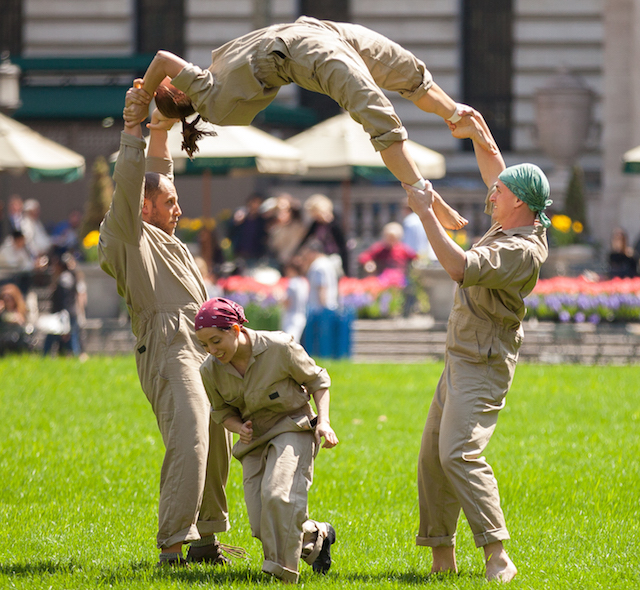 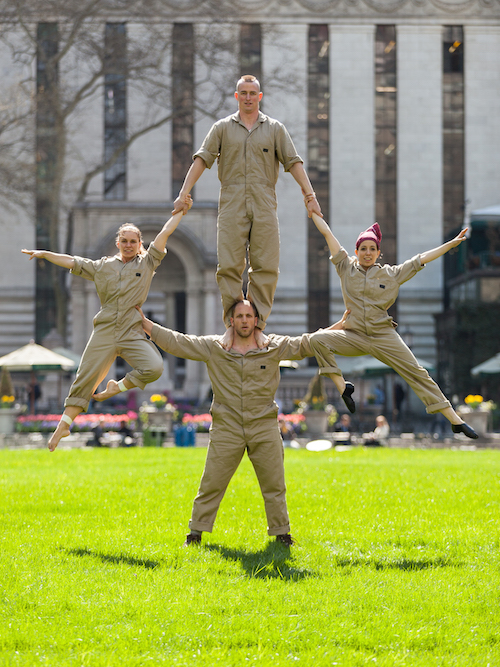 For the finale, the acrobats did the crowd-pleasing “Christmas Tree” configuration, while our tumblers flipped in front of them. 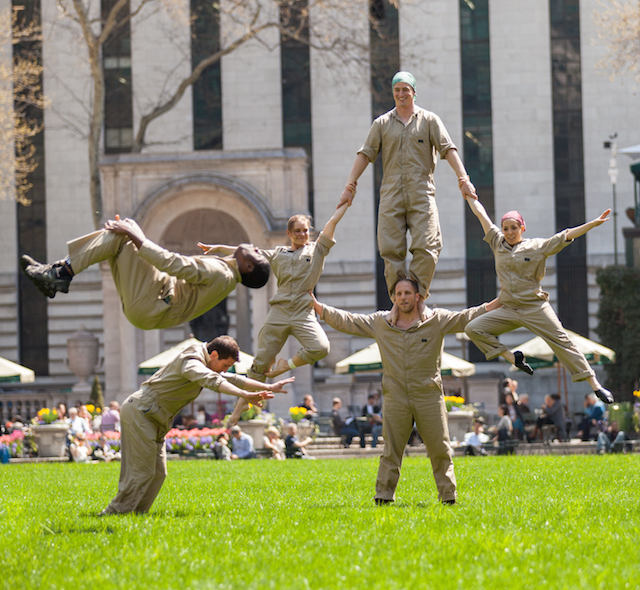 We staged the performance a few times throughout the afternoon, pausing for 30 minutes or so in between to let the crowd turn over as much as possible. Between takes, the groundskeepers went back to tending their lawn. I think the lawn was pretty spotless by the time they left. It’s open to the public now for the season, so head to Bryant Park and soak up some sun. Maybe do a somersault or two if you can while you’re there. 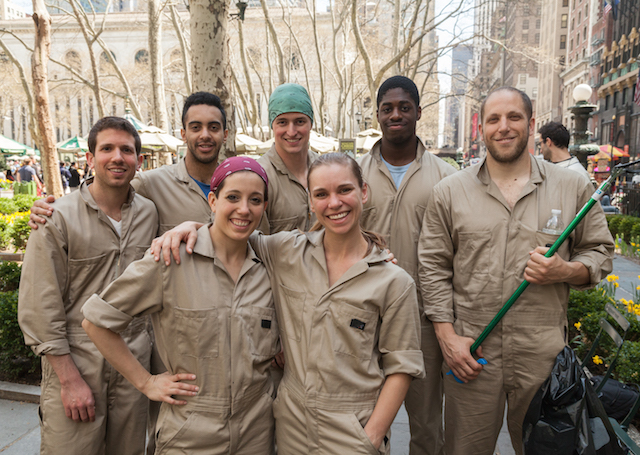