For our latest mission, thousands of people pressed play simultaneously and listened to an mp3 file filled with ridiculous instructions in Fort Greene, Brooklyn. Participants were instructed to dress in a single color and begin on the sidewalks surrounding Fort Greene Park. This was all part of our eleventh annual Mp3 Experiment event.

Enjoy the video above first, and then go behind the scenes with our photos below. We’d like to thank the BEAT Festival for hosting the event this year. 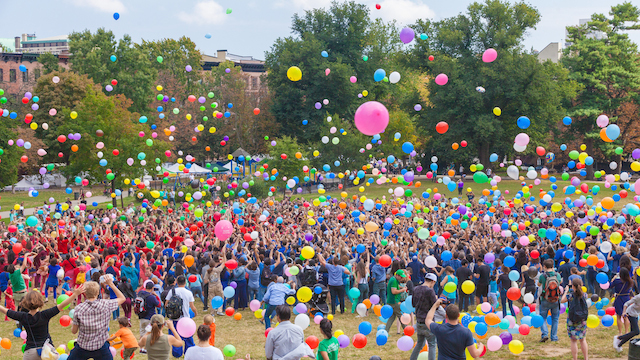 I’m not sure why it took us eleven years, but we finally staged an Mp3 Experiment in Brooklyn. Last year’s space at the South Street Seaport was a little cramped, so we wanted to find a huge park that could accommodate our large crowds. Fort Greene Park turned out to be the perfect spot, and the Fort Greene Conservancy was super supportive of us bringing the party to their space. Like last year, we staged it twice to keep the crowds more manageable. 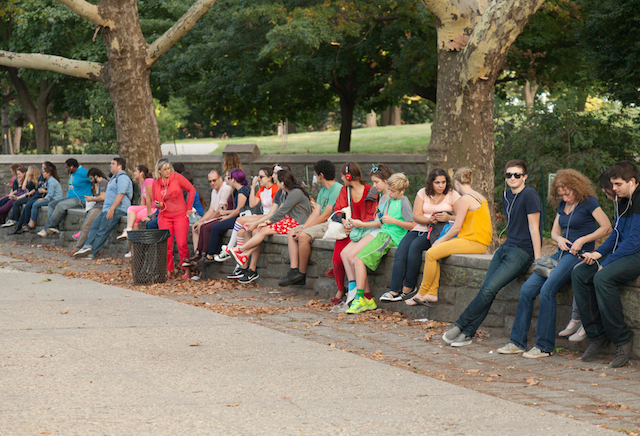 The crowd was divided up by birthday month and told to start on the sidewalks surrounding the park on all four sides. This spread out the crowd considerably, though it was still packed on the south side (the one closest to the subways and the one lazy people would be most likely to chose over their assigned side!) The first ten minutes of the experiment involved activities on the sidewalk, including listening to a binaural recording of a New York City street. This was actually recorded for a project we did in 2012 in the Bronx called Audiogram. Listening to the sounds of a city street while walking on a different street is quite disorienting. Did the car just honk, or was it in my headphones? Is there a helicopter overhead, or am I just hearing that? The sidewalk activities also included a game of “red light / green light” which provided an opportunity to freeze the entire crowd in place, much to the surprise of the motorists and cyclists passing by. 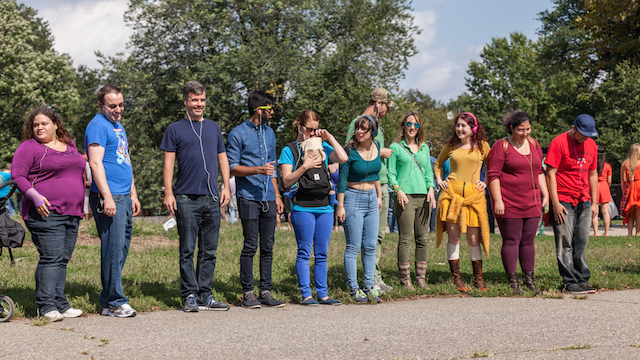 Participants were then told to enter the park. Each side had multiple entrances, so people began pouring in from all directions, surprising the folks in the park with their colorful entrance. Participants were instructed to remain on the paths, and eventually spread out to all corners of the park. While walking they were asked to mime marching band instruments, making their silent march all the more surreal for onlookers. After creating “the world’s largest kick line,” participants were told to form rainbow lines for a game of follow the leader. Countless lines of the color spectrum could then be seen meandering around the grassy areas of the park. 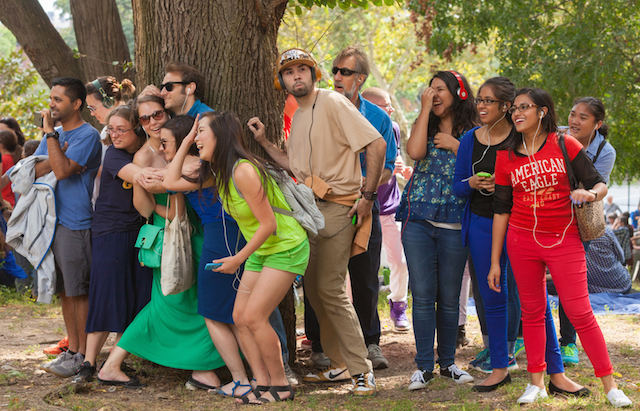 Participants then broke out of their lines for the “movie simulator” portion of the experiment, where they were told to move about as if they were in a movie and the mp3 was their personal soundtrack. This part included hiding from a villain, skipping in love, and pretending to be a secret agent in a spy movie. Some good old-fashioned freeze tag followed, with the crowd exploding with frantic movement avoiding the colors that were it. 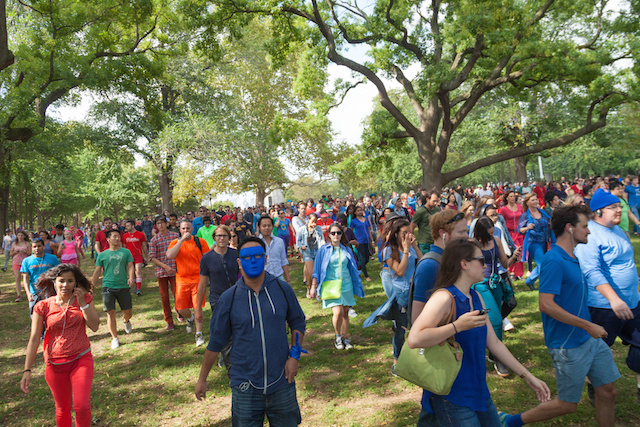 For the final section of the experiment, the crowd was told to all congregate together in the southeast field for the “Festival of Colors.” As participants arrived, they were asked to group together by color. Blue was by far the most popular color due to the fact that most everyone has a pair of blue jeans. 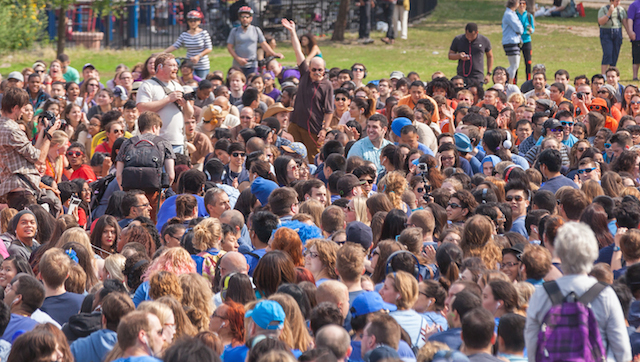 Once everyone arrived in the field together the crowd was asked to crouch down in order to recognize some special folks. Everyone celebrating a birthday was asked to stand up (more than a few!) Next people over 65 were asked to stand up and then those with children under 1 year. We had a few of both at both experiments. It truly is an all-ages event! 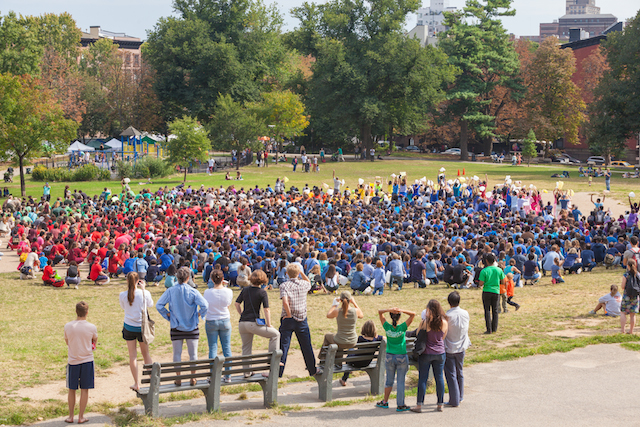 The next activity had everyone taking out the plastic grocery bag they brought with them and creating a huge wave, crouching down and then jumping up from one end to the other. Who knew that such a horrible thing as a plastic bag could look so pretty? (Besides the dude from American Beauty.) A word about the bags: we know they are terrible for the environment. They were chosen as a prop because it’s something everyone already has in their apartment. Even if you religiously use your canvas bags, you still accumulate the plastic ones from the delivery guy, etc. We wanted to find a prop that wouldn’t require you to spend money and that you could hide in your pocket. The bags also came in handy later as a way to clean up the popped balloons (and yes, I know that balloons aren’t the best for the environment either, but c’mon, balloons are awesome.) 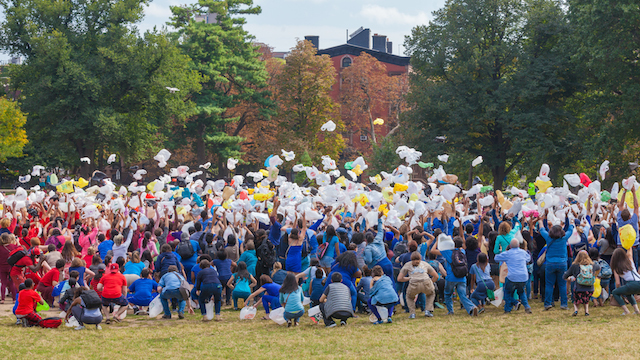 Our friends at NYC Aerial Video had their drone on hand to get breathtaking coverage of the crowd from the sky. The drone was a big hit whenever he flew close the crowd. I wonder if in a couple of years it will be completely commonplace? 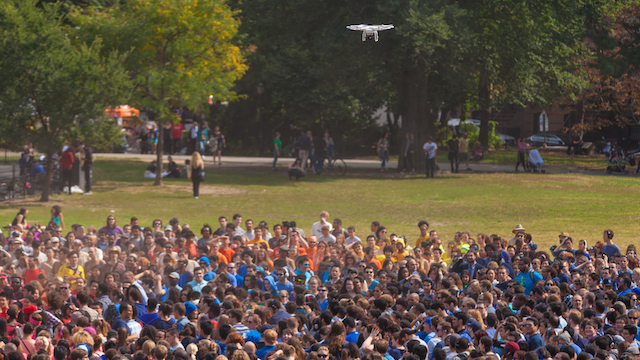 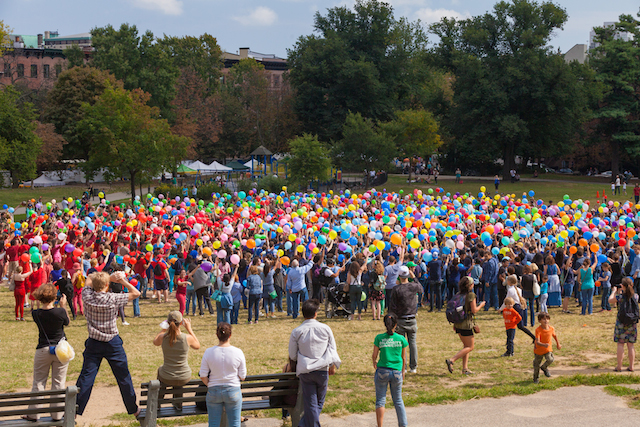 Although we use balloons frequently when we tour the Mp3 Experiment to festivals and colleges, we haven’t used them in our New York experiments since 2008’s Mp3 Experiment 5 on Governor’s Island. This time instead of a balloon battle, we had participants try to keep the balloons in the air as long as possible. The explosion of color was awesome. At the end, all balloons were popped and cleaned up. As always, we left the park as we found it. 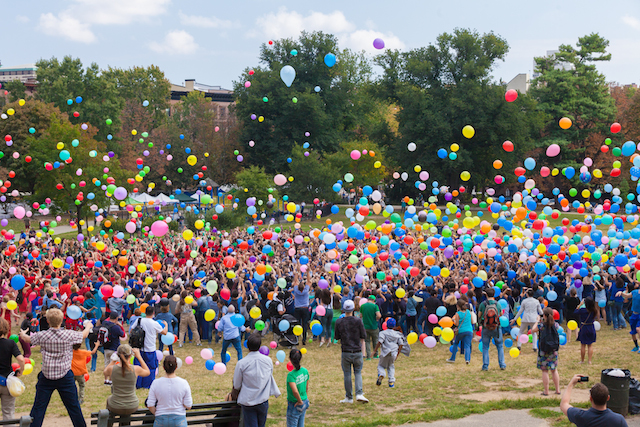 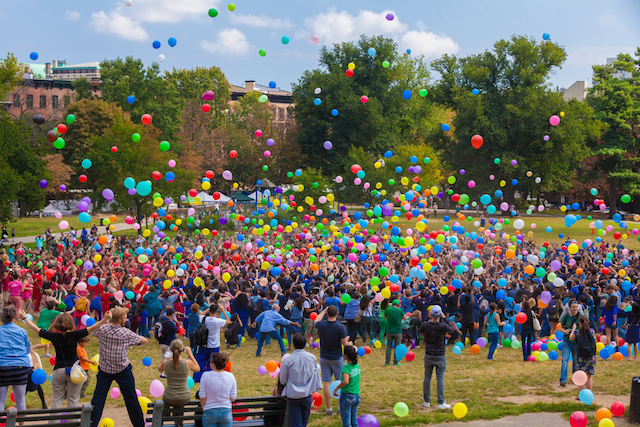 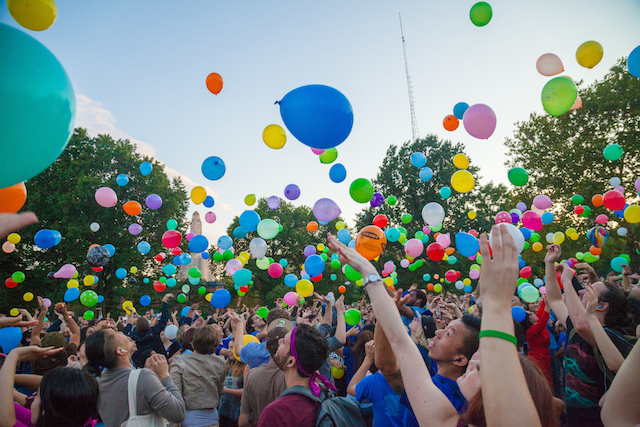 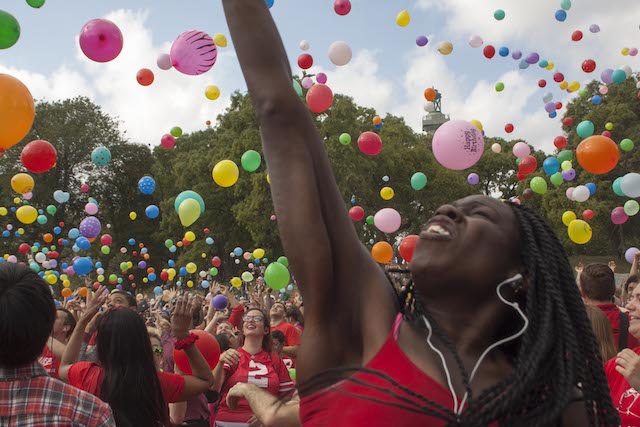 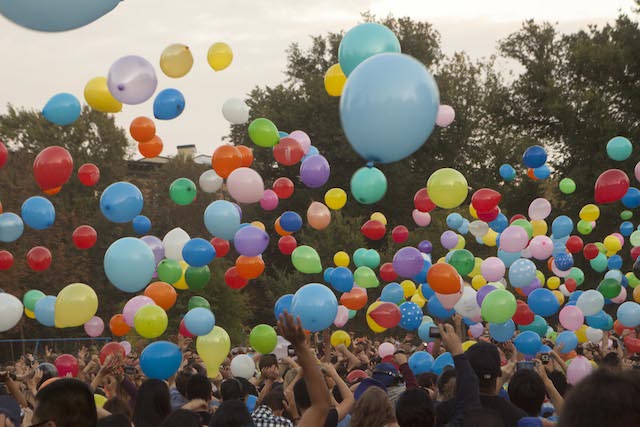 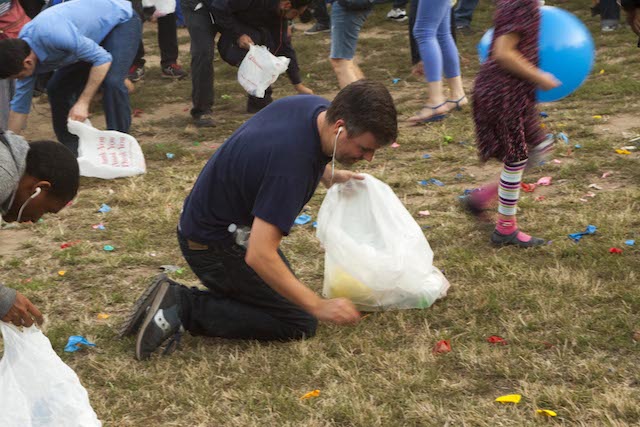 For the final activity we tried something entirely new for an Mp3 Experiment, unplugging the headphones. This wouldn’t have been possible back in the days when people participated with iPods, but now that most everyone is using a phone with a speaker, we wanted to hear what it would sound like if we could hear everyone’s device at once. Tyler Walker composed an awesome piece that sounds pretty boring by itself, but was designed to sound beautiful when played by thousands of not quite in sync devices. 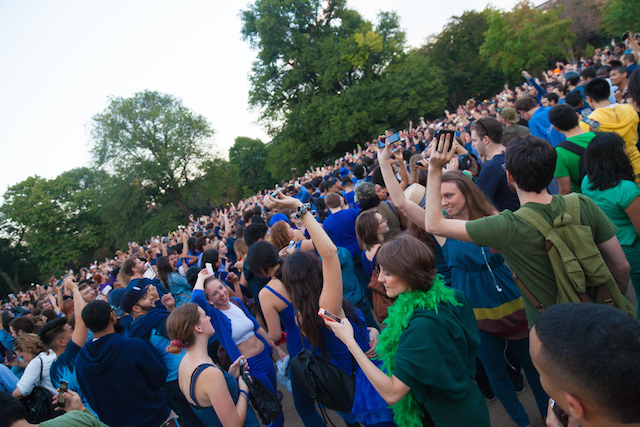 The 6 PM edition sounded particularly beautiful. Participants spontaneously started turning their camera’s flashlight on, which looked beautiful. I’m sure we’ll be using that idea next year!

Thanks to everyone who came out! See you at the Mp3 Experiment 12.

Watch the videos of our previous 10 Mp3 Experiment projects.

Official photos from our photographers:

As always, all of the music was created by our composer Tyler Walker. Check out his site to download free songs from today’s mp3 or stream it in the player below.