For our latest mission, we surprised shoppers and employees at the 5th Avenue Gap in Manhattan by giving the store 40 extra mannequins. Performers entered the store wearing white Morphsuits under Gap-style clothing. At the exact same second they zipped up their suits and froze in place next to the store’s actual mannequins. Customers and employees laughed and took photos of the performance, but Gap security reacted by dialing 911. The police arrived and handcuffed many performers, but after assessing the situation, everyone was allowed to leave the store. 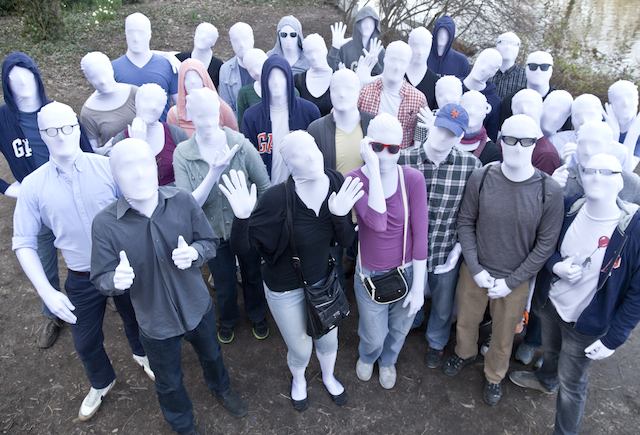 About a month ago I wandered into the brand new Uniqlo store on 5th Avenue. While browsing I was struck by how many mannequins they had in the store. While giving one a closer look, I realized how much they looked like humans wearing white Morphsuits. I immediately knew that I needed to get a crowd of people to dress up in Morphsuits and Uniqlo style clothes and pose in the store. 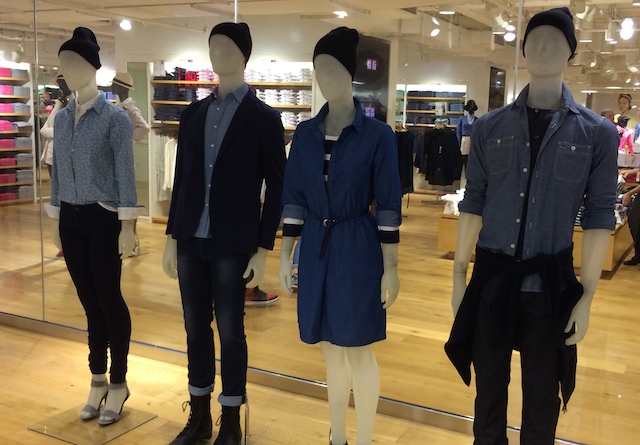 I went back to scout the store just a few days later, and to my shock they had replaced every single mannequin the store (hundreds) with clear mannequins. Clear mannequins wouldn’t work at all! So we had to find another store with lots of white mannequins. Eventually we settled on the nearby 5th Avenue Gap. 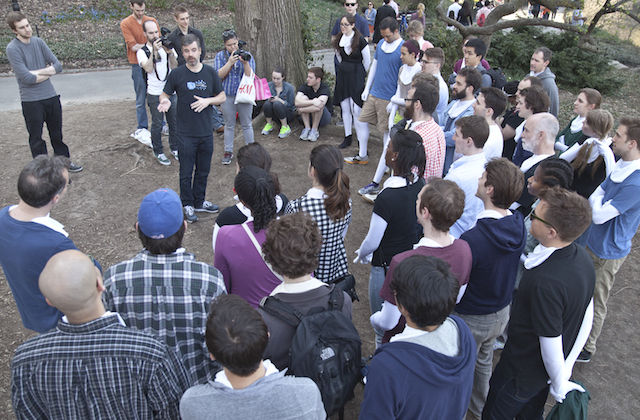 I noticed the female mannequins were around 5’10” and the male mannequins were just over 6′ and that they were all slender. I used the Improv Everywhere email list to find people in the right height and weight range to participate. The participants were told they would be wearing a Morphsuit in public, but they weren’t told what they would be doing until they arrived at the meeting point in Central Park. I asked them to show up in Gap-style clothing. 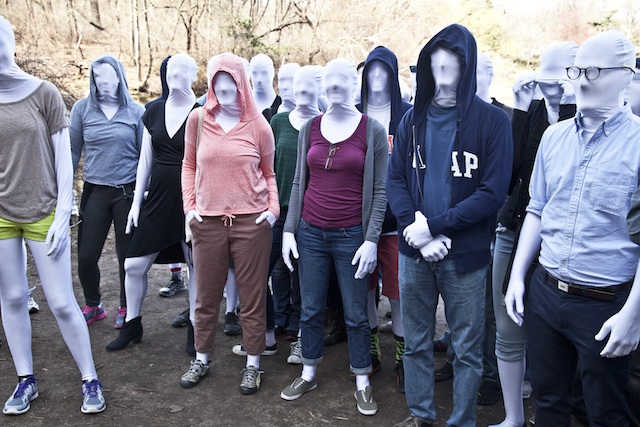 The participants suited up in the park and they looked great! I was particularly impressed with how realistic (and creepy) the performers wearing hoodies looked. The hoods perfectly hid the zipper. The folks at Morphsuits have always been nice to us at Improv Everywhere, having sent us some colorful suits years ago that we used for our Spinning Beach Ball of Death mission. I got back in touch with them and asked if they could hook us up with some white Morphsuits, and they were happy to help out. 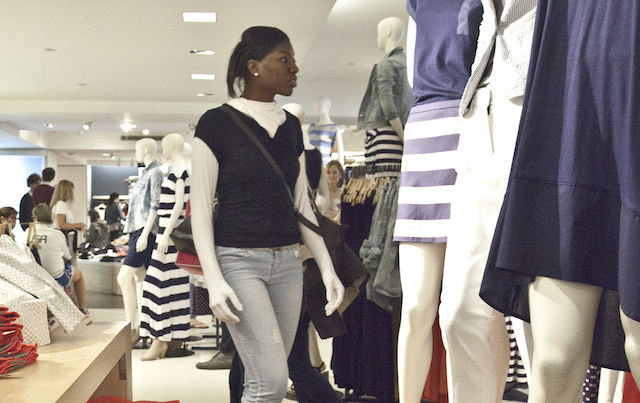 After getting organized in the park, participants walked down to the store and entered separately with the head part of their suits unzipped and tucked in their shirts. Folks wearing jeans and long sleeves were able to completely hide their suits. Others wearing short sleeves or shirts were more obvious. The plan was to zip up the heads at exactly 3:36 PM. Participants spread throughout the store, going to their assigned floor. 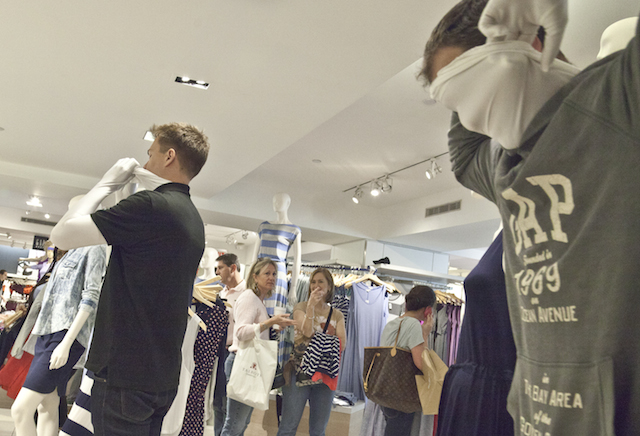 3:36 arrived and everyone zipped up and froze in place next to a mannequin of their same gender wearing clothes similar to them. The plan was to freeze in place for five minutes and then to walk about like a stiff mannequin for a bit as we exited the store. The whole performance would be around 10 minutes. 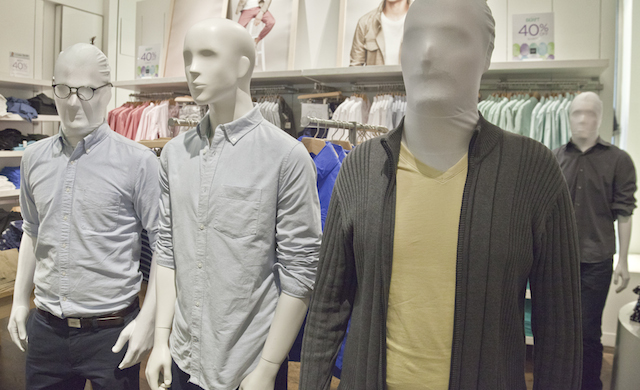 It was really funny how well our performers blended in. I knew what was going on, and I still kept getting surprised by the fake mannequins. 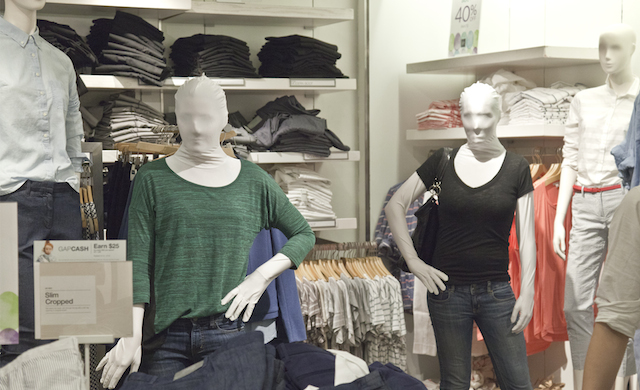 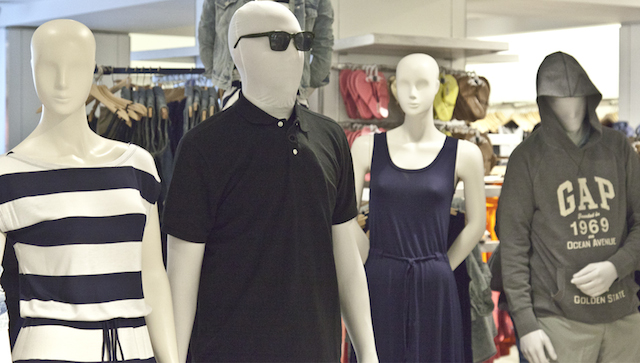 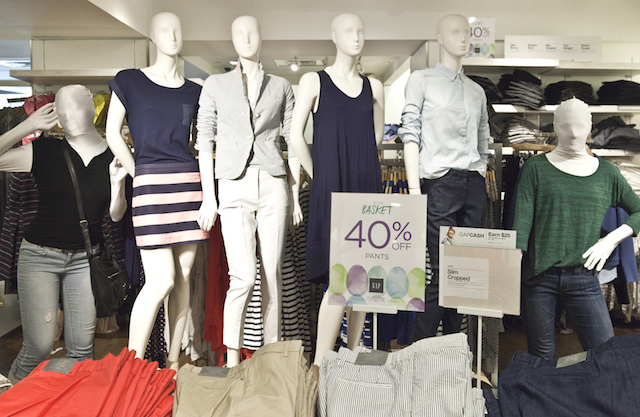 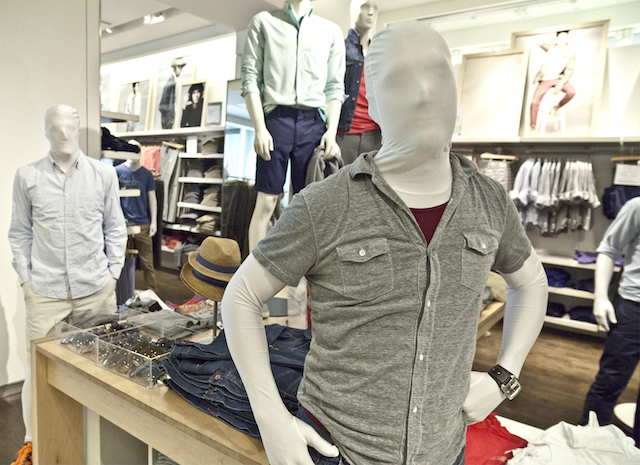 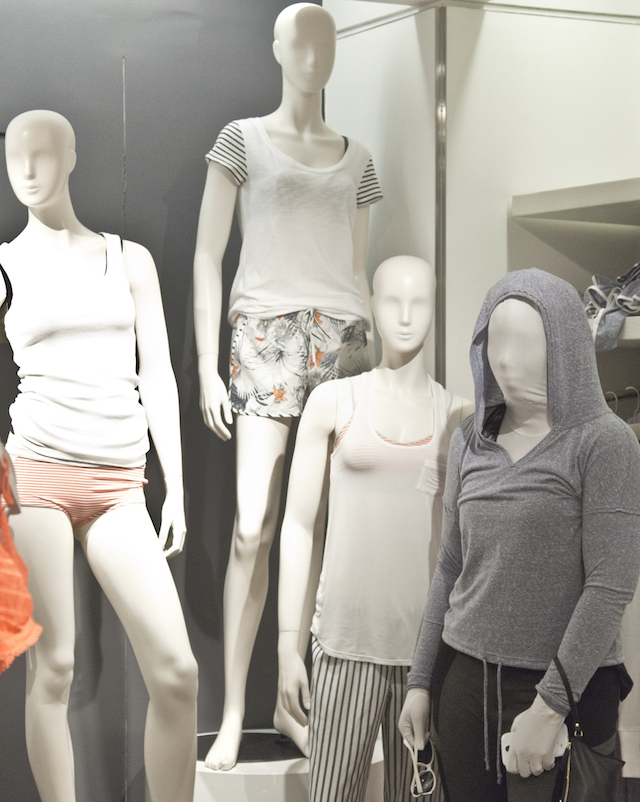 Participants froze in the area of the store where their clothes were on sale. Pajamas in the pajamas section, etc. 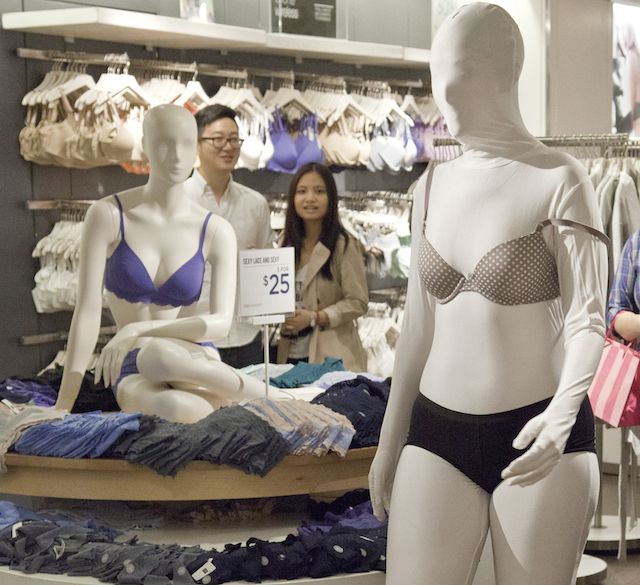 Two participants wore Gap underwear and posed in the Gap Body section. (Only one is pictured.) 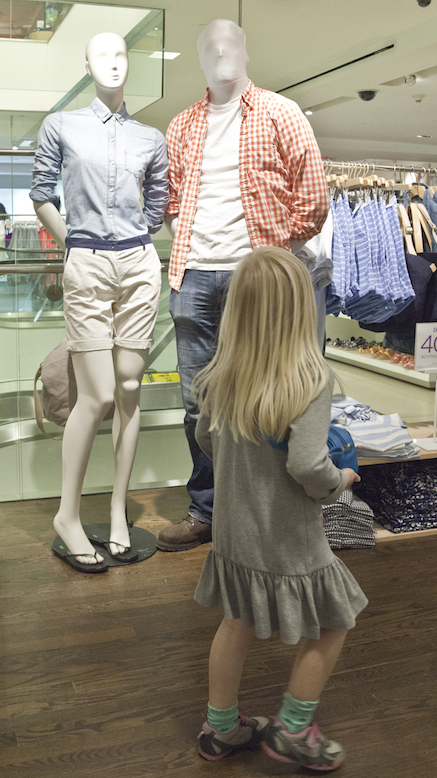 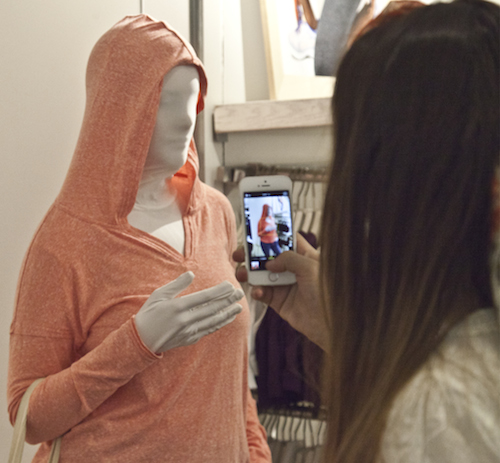 The reactions from the customers and employees were great. Most everyone laughed and pointed it out to others. It was fun watching people try to spot as many fake mannequins as they could. Many people snapped photos, and some took selfies with the fake mannequins. The funniest reactions to me were the people that walked through the store without even noticing, some even touching the clothes on our performers as they shopped. 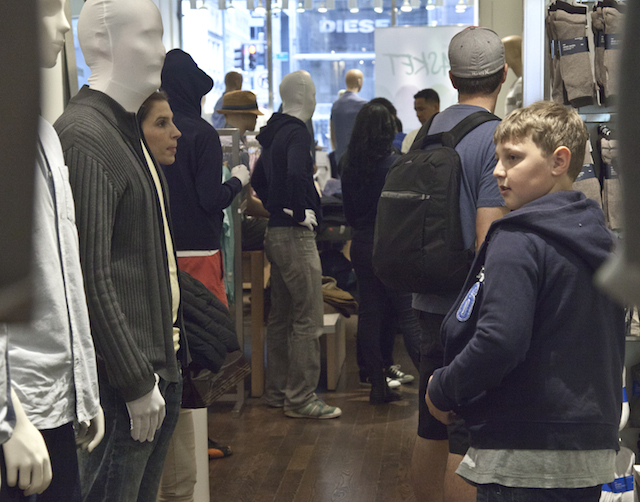 The kid pictured above was a European tourist and he took great pleasure in poking the fake mannequins.

The only people in the store who were not enjoying the performance were Gap security. Their loss prevention manager dialed 911 immediately after the Morphsuits were zipped up. I figured there was a chance we’d get asked to leave, and I instructed the participants to leave the store if asked. (To prevent getting in trouble for trespassing.) The security guy didn’t ask us to leave or even talk to any of the fake mannequins, he just went straight to calling 911. 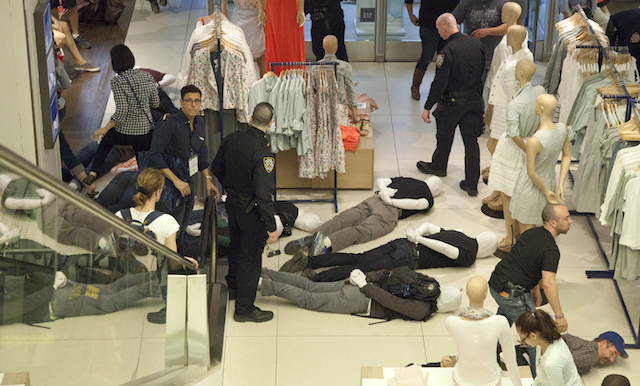 The Gap security guy informed 911 that a “flash mob” was in progress in the store, which the police took to mean “robbery.” This is a side effect of the news media freaking out over teenagers robbing stores in Philadelphia and Chicago a few years back and declaring the crimes to be “flash mobs.” Kids robbing a store is a not a flash mob. But it doesn’t matter what the term actually means; the media hysteria over robbery mobs stuck, and the cops clearly had that in their head when they arrived. The immediately started handcuffing participants and placing them face down on the ground, Morphsuits still zipped up. While that shocked us and seemed like a huge overreaction, I guess it makes sense if you think a robbery is happening. 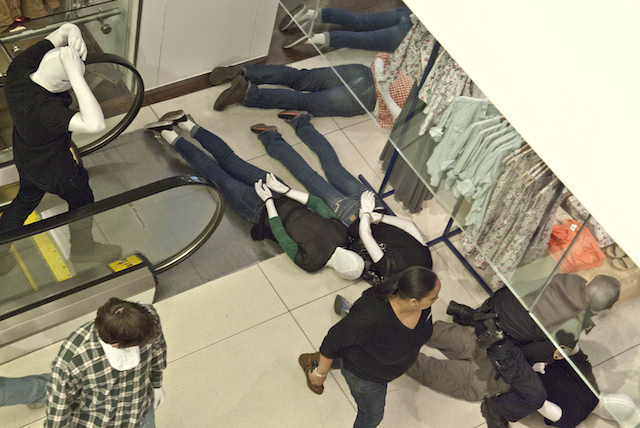 The timing of all of this was terribly unlucky. The managers on the second floor had just started asking our participants to leave the store. Participants were taking the escalator down to the first floor and walking directly into handcuffs. Of our 40 performers, about 20 ended up in cuffs. The cops actually ran out of handcuffs. Some peformers were able to unzip their suit and tuck the head back in their shirts. They walked out the front door looking like anyone else. Two participants figured out what was going on and went to a Gap dressing room. They removed their suits entirely, stuffed them in their pockets, and were immediately transformed into a normal customer.

I felt terrible as all of this was going on. 20 people who I didn’t even know personally were cuffed on the floor all because of me. I quickly went downstairs and claimed responsibility and identified myself as the organizer. “You’re the ORGANZIER???” a cop responded incredulously. I think maybe he still thought it was a robbery at that point? “OK well you’re getting cuffed too Mr. Mastermind.” 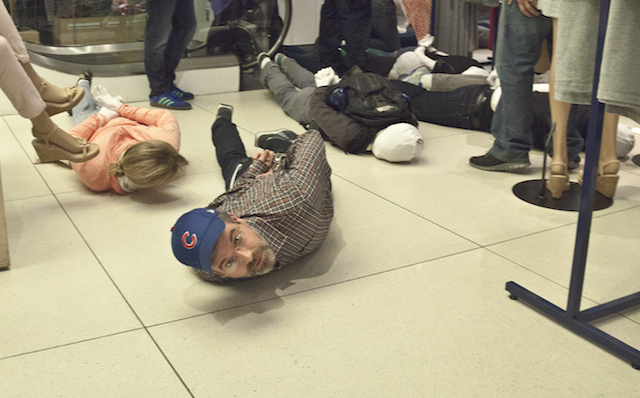 At this point they started letting participants unzip their suits. The cops were pretty surprised when they realized the mob was a diverse group that included 22-year-old women and senior citizens. It became pretty clear that this was not a crime syndicate. 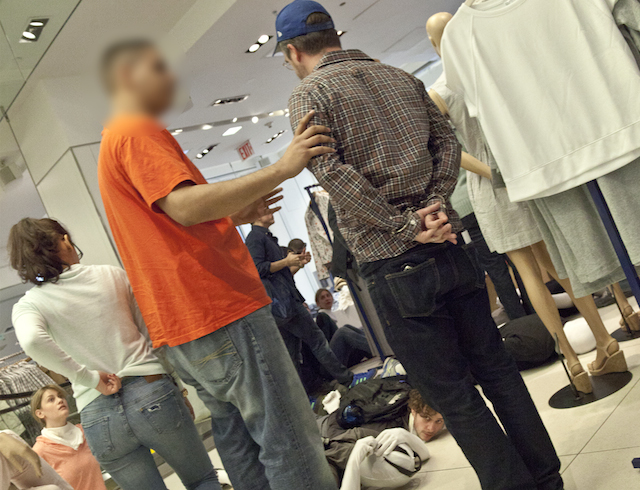 I had long talks with several cops and apologized for wasting their time. After the initial hysteria, they were all very nice and professional. One cop actually told me he had participated in our Mp3 Experiment last summer. Despite the massive response to what was a harmless, funny performance, I understand that from their perspective they were responding to a 911 report of a robbery. Ultimately, I’m the guy that was responsible for the chaos.

The manager of the store was not happy about the situation, and there was some talk of lifetime bans from the Gap for the participants, but ultimately she decided against it. After the cops fully understood what had taken place, they started un-cuffing participants and letting them leave. 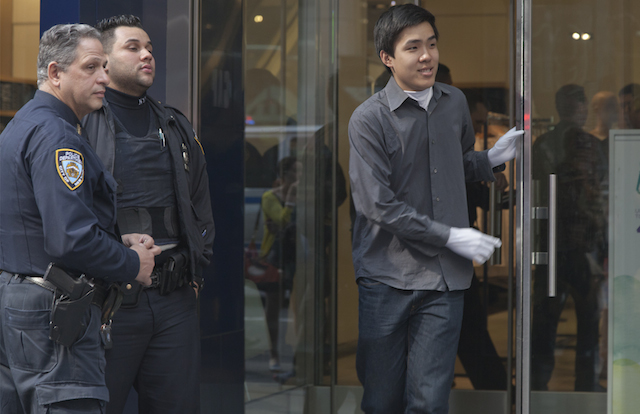 I’m never happy when the police show up to an Improv Everywhere event. It’s been 8 years since the last time we had an incident like this at( a retail store Best Buy.) It’s never our goal to get the police involved, and I feel bad about wasting the NYPD’s time. I really thought the Gap would do one of two things: 1) Ask us to leave or 2) Do nothing and we’d leave on our own in 10 minutes. In recent years, Staples politely asked us to leave when we held a boardroom meeting in their store, Macy’s did nothing as we had a slow motion Matrix fight, and Starbucks did nothing as 20 men claimed to be Spartacus.

You never know how a store is going to react to an unauthorized performance on their property.

Thanks to the awesome group of participants who helped us pull this off. Everyone was great and handled themselves so well when things got tense. 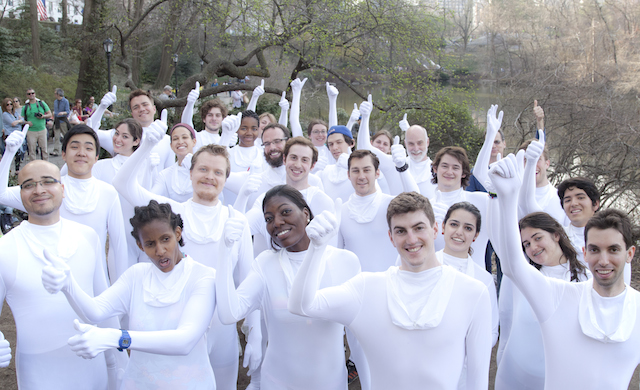