We staged a fake torch run in the middle of Manhattan, giving random New Yorkers a chance to carry the flame. A performer posing as an injured athlete asked people on the street to help her by carrying the torch around the block. Once the New Yorkers rounded the corner, they were surprised by a huge mob of people cheering and a TV news crew. Enjoy the video first and then go behind the scenes with our mission report and photos. 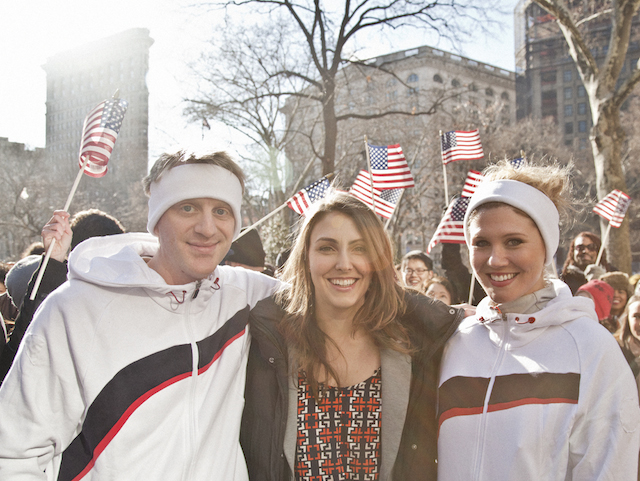 Agents Patrick Noth, Lauren Adams, and Shalyah Evans
We wanted to do something with an Olympic theme, since it’s been 10 years since our last one, Synchronized Swimming. The torch run is an iconic event that is instantly recognizable around the world. We thought it would be fun to surprise everyday people a random chance to run with the torch. 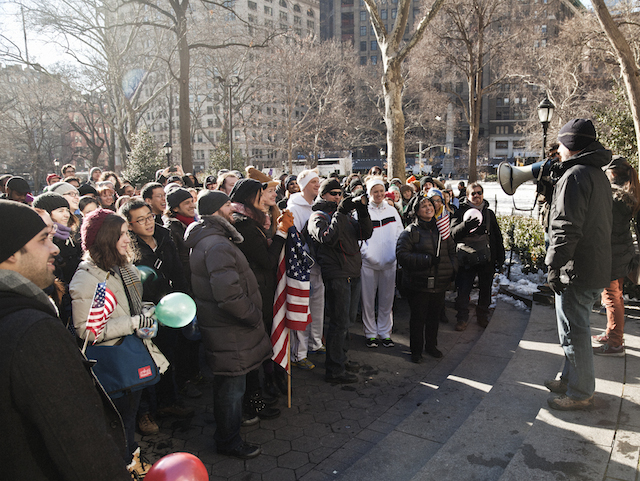 We recruited participants to be the cheering crowd via the Improv Everywhere NYC email list. It’s tricky using a massive email list (tens of thousands of people) to try to get a specific size crowd. We had about 1,000 people sign up in the first few hours and had to limit it to the first 400 people who responded. Any more would have been too difficult to manage, particularly given the fact that we had no permit or permission to stage this! 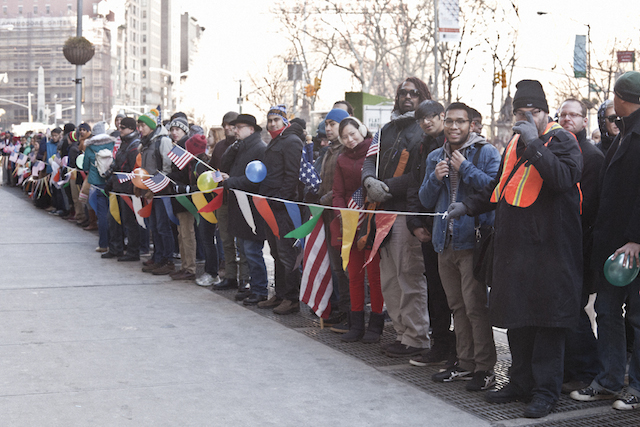 We had the crowd position themselves on the east side of the Flatiron building, hidden from where the mission would start. 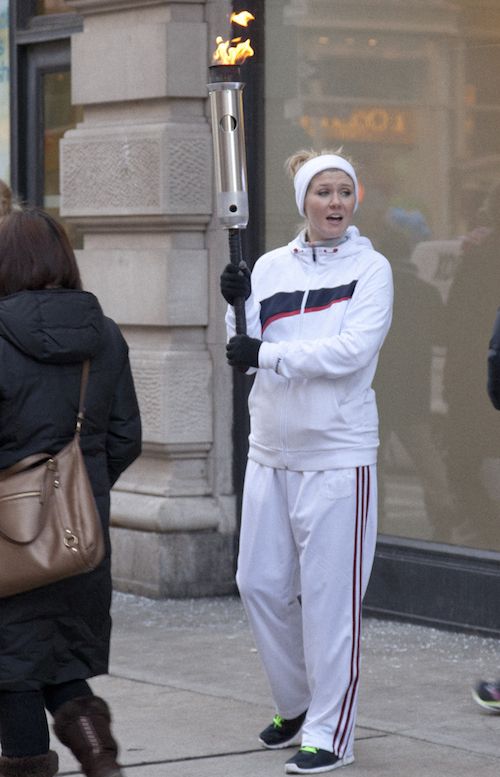 Agent Evans started on the south side of the building, around the corner from the crowd. Our torch was built by Agent Ilya Smelansky. He modified a propane-powered tiki torch, giving it a custom handle and a protective guard made out of a pencil holder. We wanted it to look nice enough to seem like the real thing. The mission took place about a week before the Opening Ceremonies of the 2014 Winter Olympics, so it would be somewhat plausible that it could be the actual torch (if one didn’t know that the torch run route is only through the host country.) 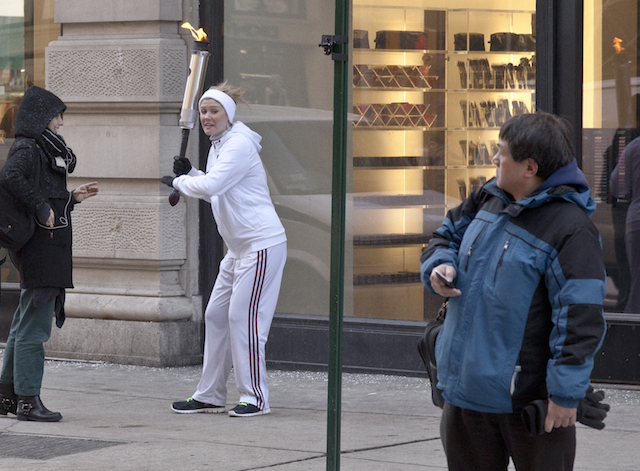 Agent Evans stopped pedestrians on the street asking for help, explaining that she sprained her ankle and couldn’t complete the torch run. “Would you be able to just take this right around the corner? My teammate should be there waiting for it.” We placed her near a subway exit which ensured that the people coming up the stairs had not seen the crowd on the other side of the building. 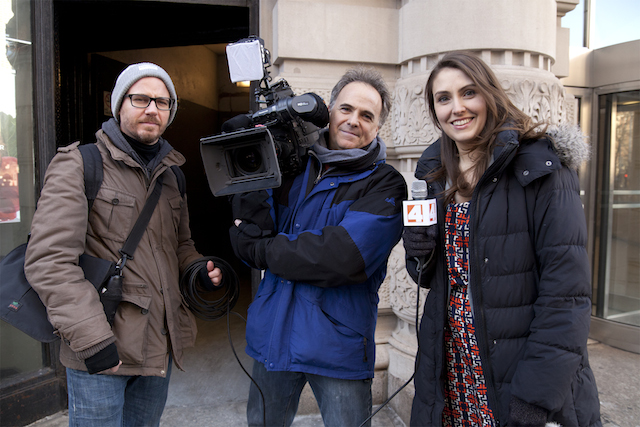 Our channel 4 news crew, waiting to interview the first runner. 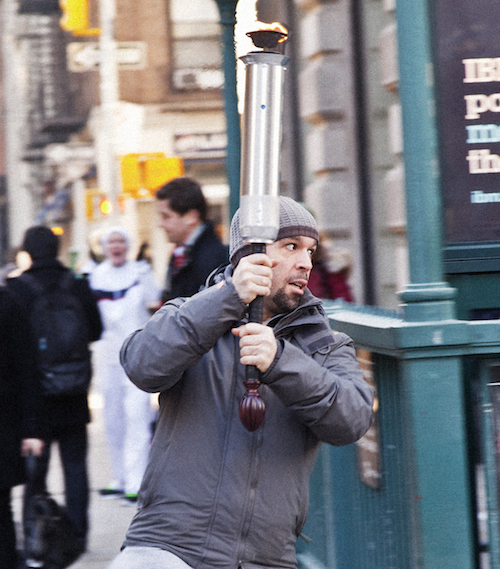 The first person to say yes was a guy named Jason. Jason took off SPRINTING after he got the torch and went so fast that he blew right by Agent Noth and had to be called back to make the hand off. The whole thing was a blur to him and to us!

The crowd after Jason blew by. 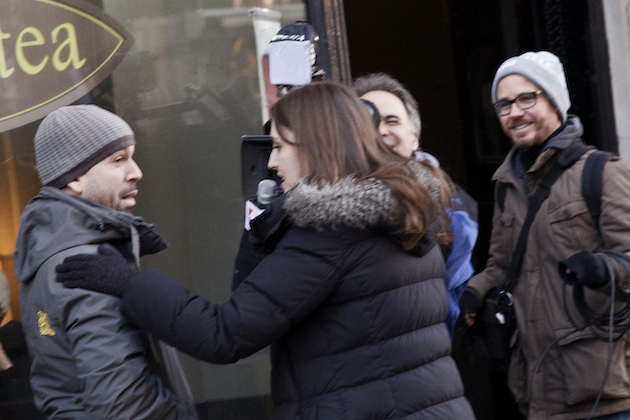 Agent Adams interviews Jason. He was, as he said, “confused,” but also laughing. 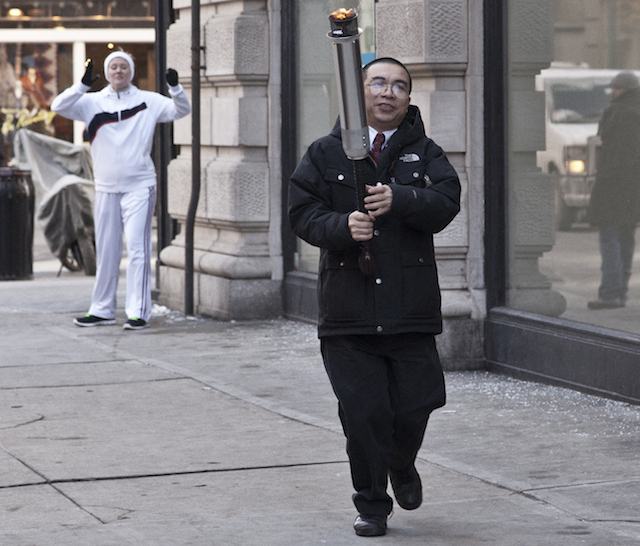 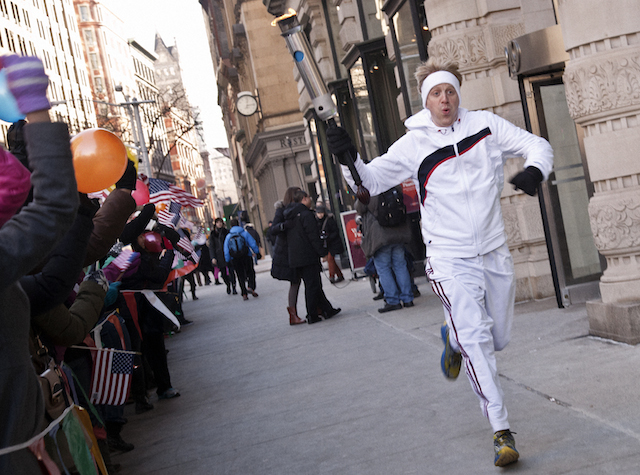 Agent Noth runs away after Henry makes the pass. After each runner, Agent Noth disappeared around the corner and stayed there until it was time to reset and find a new runner. 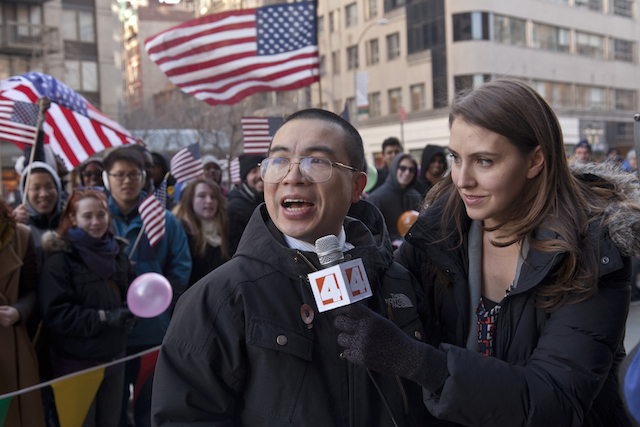 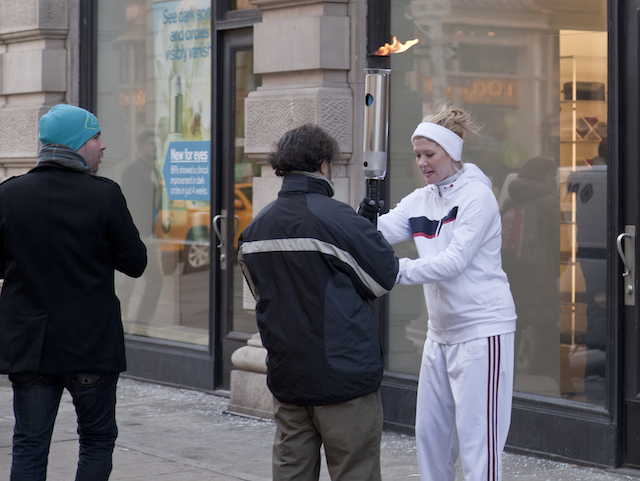 Agent Evans passes the torch to a new runner. She made sure to have each person hold it with two hands. Safety first when passing an open flame to a random stranger. 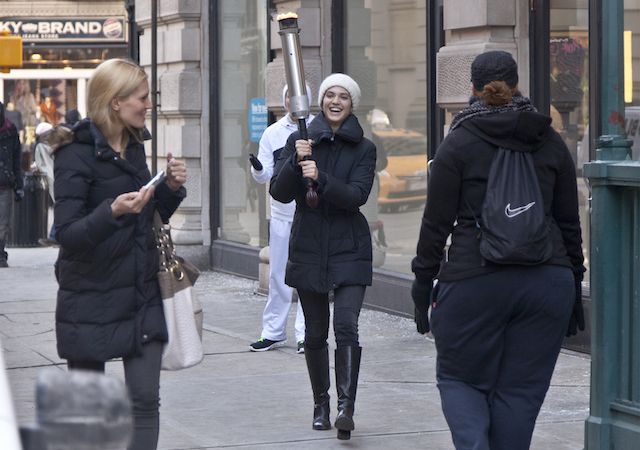 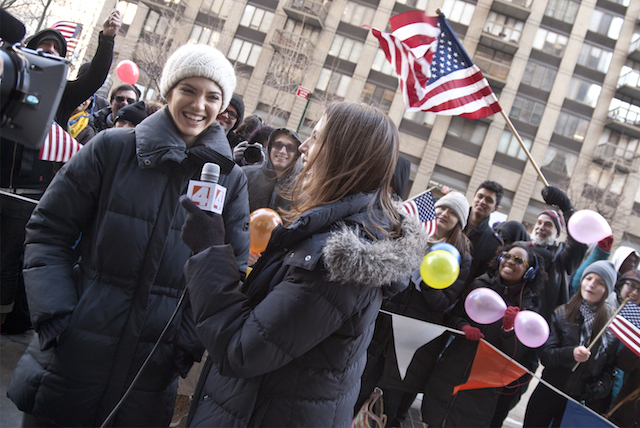 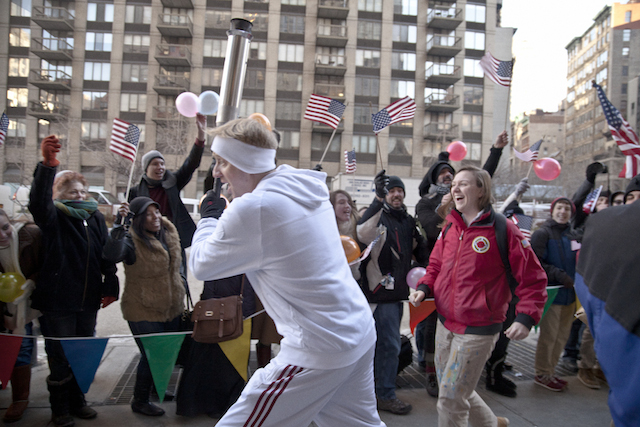 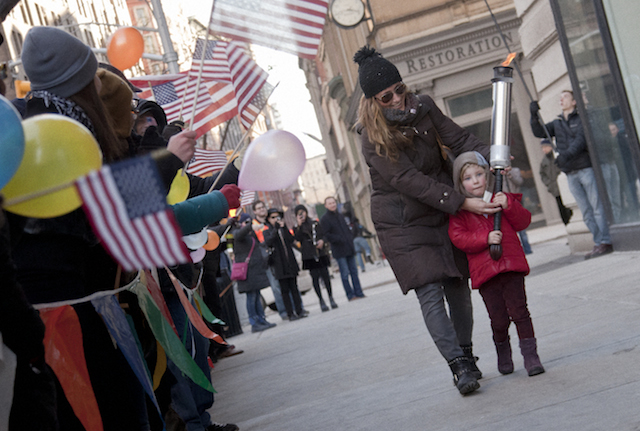 One of the day’s highlights came when 3-year-old Allegra carried the torch with the help of her mother. 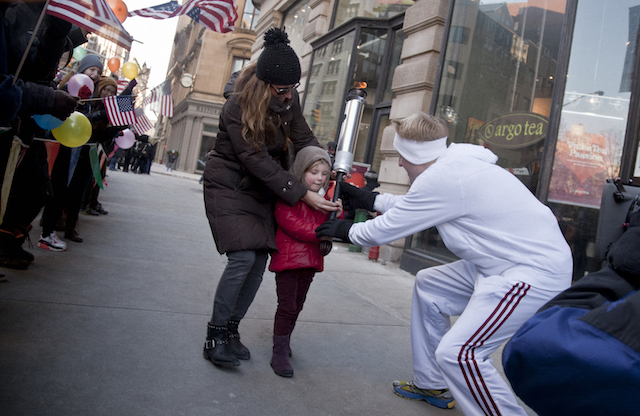 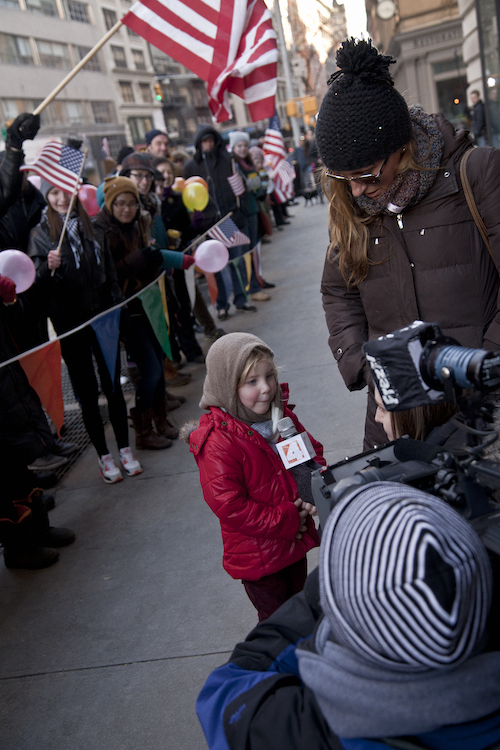 It was a blast to watch the reactions as the runners rounded the corner and saw the crowd for the first time. Most of them started running faster along with the cheers. We had a wide variety of New Yorkers say yes to helping Agent Evans. A few people who were in a hurry, on the phone, or otherwise busy said no, but we were really surprised with how quickly most people said yes. We were worried we might have to wait long periods of time before finding someone, but we never waited more than a few minutes to find a helping hand. Most of the waiting was for another subway train to show up and spill more people onto the block. Our crowd did a great job on a particularly cold day. Thanks to everyone who helped us out! 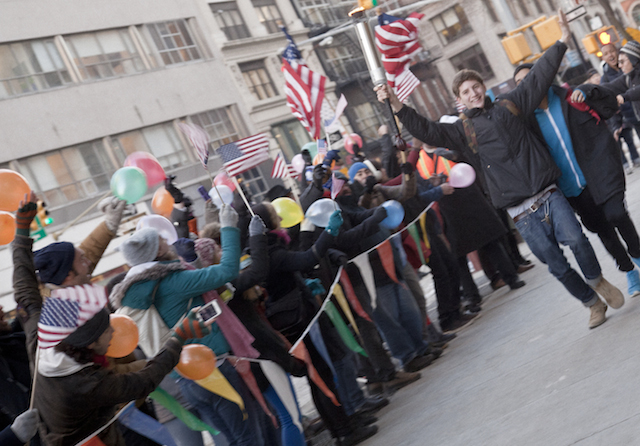