For our latest mission, a presenter at the TED conference has his talk interrupted by the Mac spinning wait cursor, commonly known as the “Spinning Beach Ball of Death.” As he stands awkwardly and waits, things get weird. Enjoy the video first and then go behind the scenes with our report below. 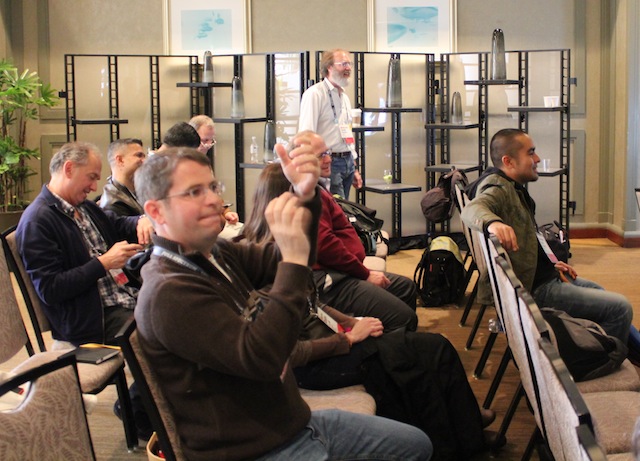 Rehearsal
For the uninitiated, TED is an annual conference in Long Beach, California that focuses on “Ideas Worth Spreading.” I gave a talk at a TEDx event last year that was promoted to TED.com. For the conference this year, the TED curators approached me about staging something unexpected to surprise their audience. We had previously staged a musical prank at a conference, but I wanted to do something new and different for TED. I came up with the idea to have a fake speaker give a talk and make it seem like his big moment in the spotlight had been ruined by a computer crash. Apple users love to hate the notorious Spinning Beach Ball of Death. I started with that image and set out to heighten it to absurdity. 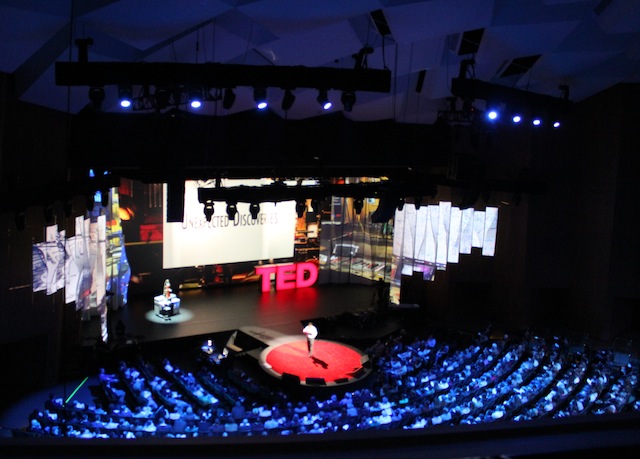 Agent Cordero takes the stage
Eugene Cordero played the fake speaker, “Colin Robertson.” You might remember Agent Cordero as the wrestler who crashed my wedding. He was introduced like a normal TED speaker, and took the stage in front of 1500 people at the Long Beach Performing Arts Center. 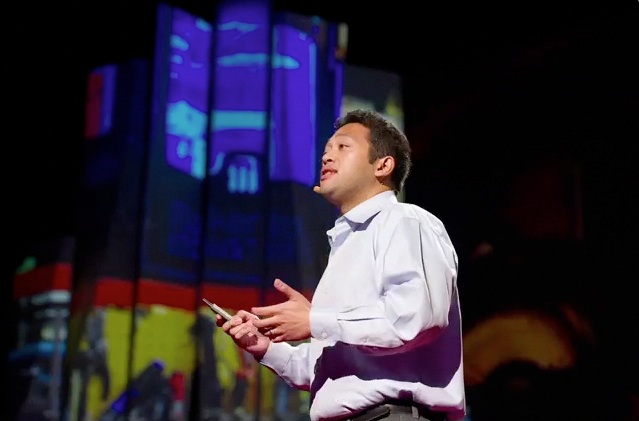 Colin Robertson was introduced as “a futurist whose start-up has discovered how crowdsourcing solar panel technology innovations can lead us to a new paradigm for health care reform.” So, basically nonsense, but nonsense that sounds interesting and innovative at first glance. Agent Cordero only got a few sentences into his talk before the beach ball appeared. 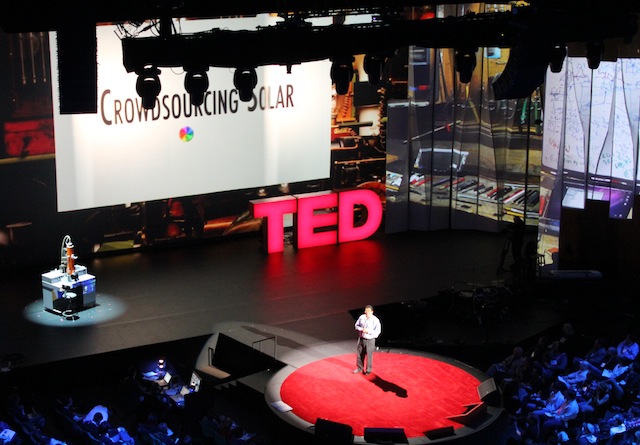 The beach ball spun for 20 seconds without anything else happening (even longer than the video shows.) We made it as awkward as possible, with Agent Cordero politely suggesting the tech person skip ahead past the crashed slide. The crowd clearly felt bad for the poor guy. 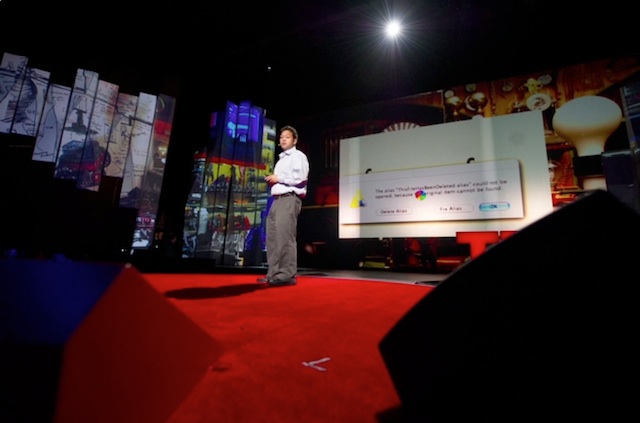 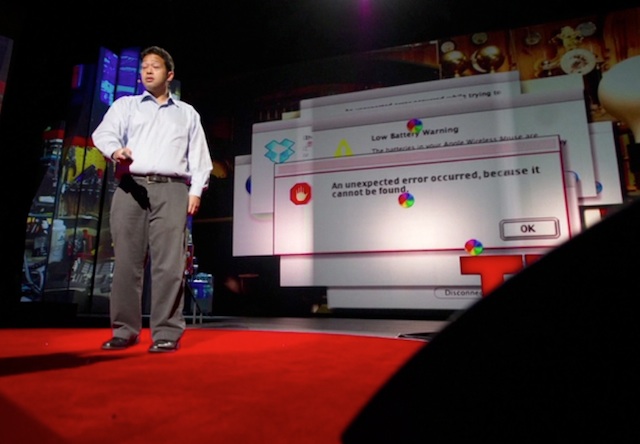 The crowd started to catch on that something was not right as the error messages starting piling on top of each other. Errors from older Mac operating systems starting popping up, one accompanied by the classic “eep” sound. Then two additional spinning beach balls appeared. At this point, performers secretly placed in the crowd popped open umbrellas that looked exactly like the spinning beach ball. 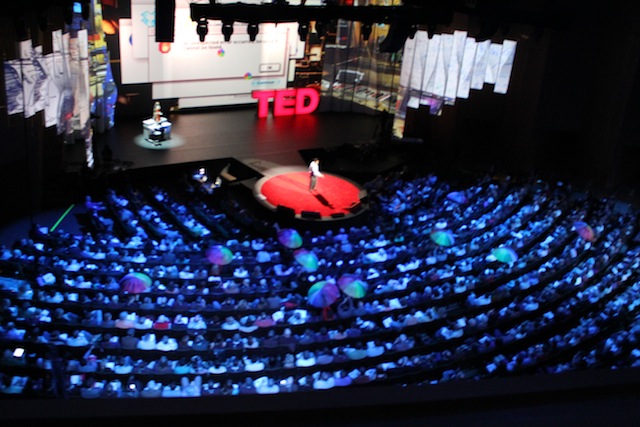 The view from the balcony 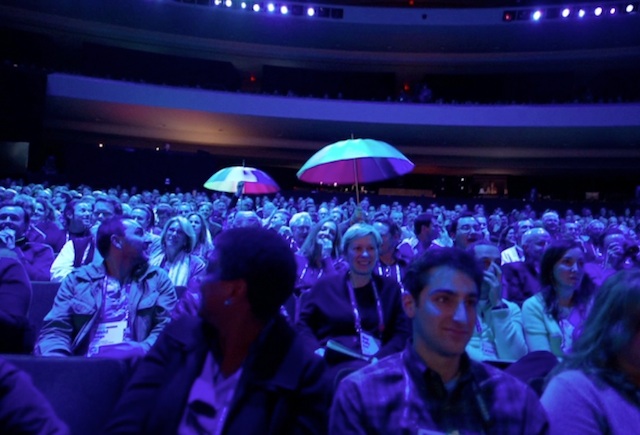 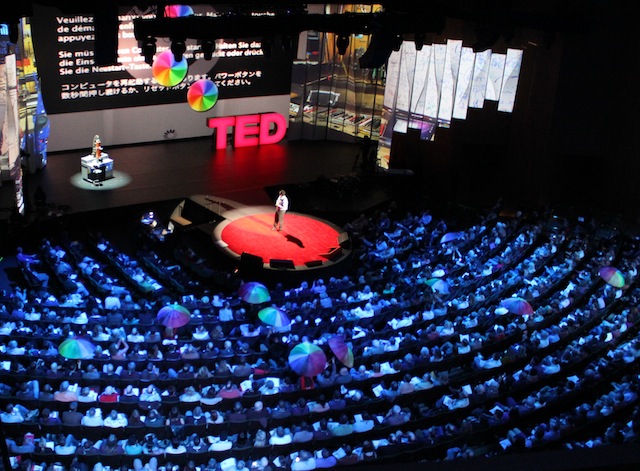 A restart screen appeared and the spinning beach balls started to grow as music began playing. 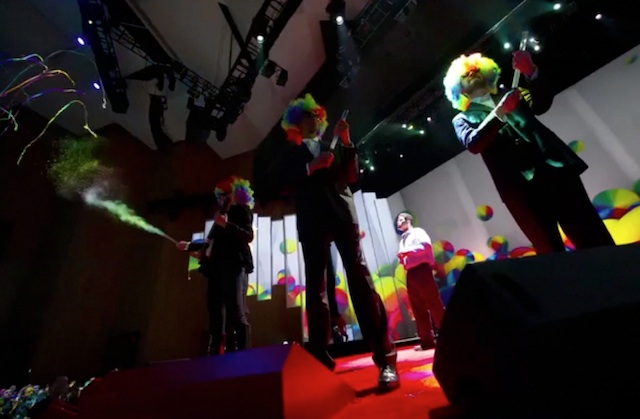 Five performers walked on stage in black suits and rainbow wigs. They each fired a handheld cannon, sending rainbow streamers into the crowd. 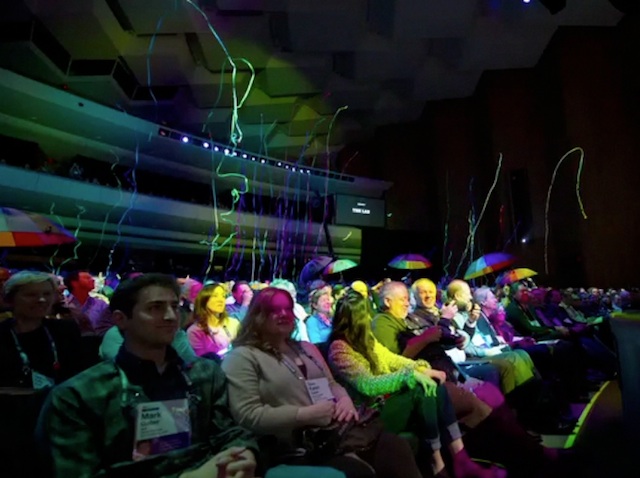 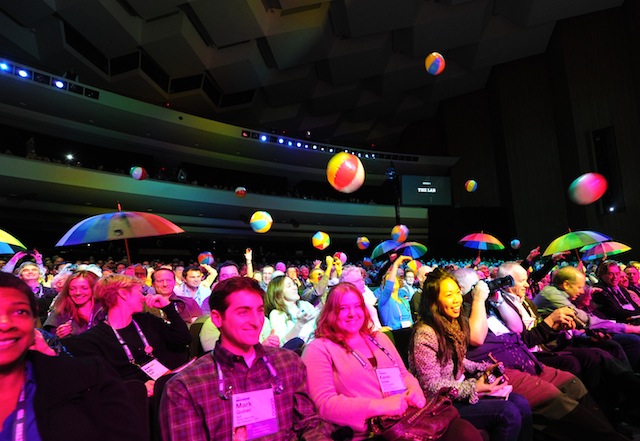 Performers hiding in the 2nd balcony tossed dozens of actual beach balls onto the crowd as rainbow colors were projected across the entire room. 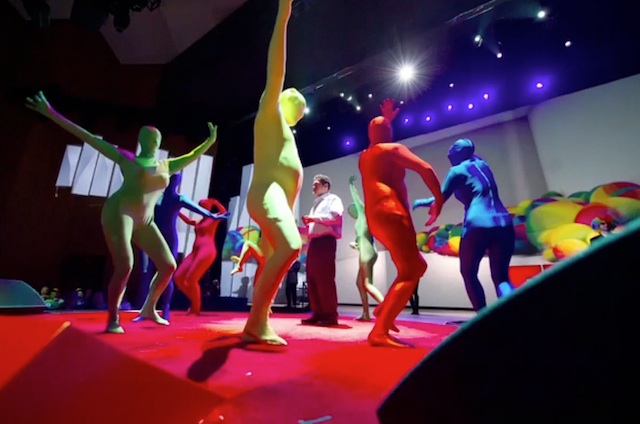 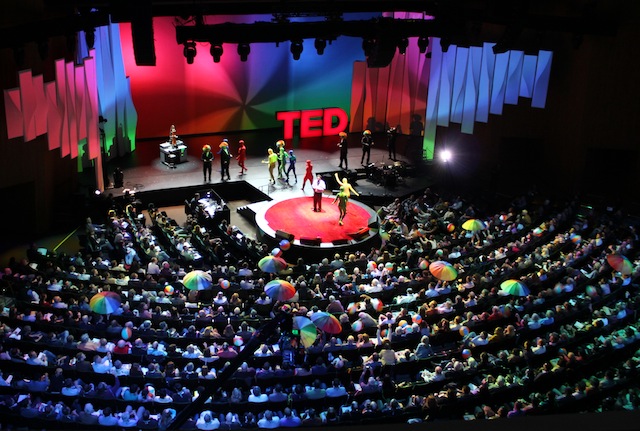 We worked with the TED in-house animator, Bob Bonniol, who created a spectacular animation for the stunt. TED had an enormous screen that sort of exploded out towards the audience. As the chaos reached its height, the screen saw huge spinning beach balls exploding to reveal hundreds of smaller ones. 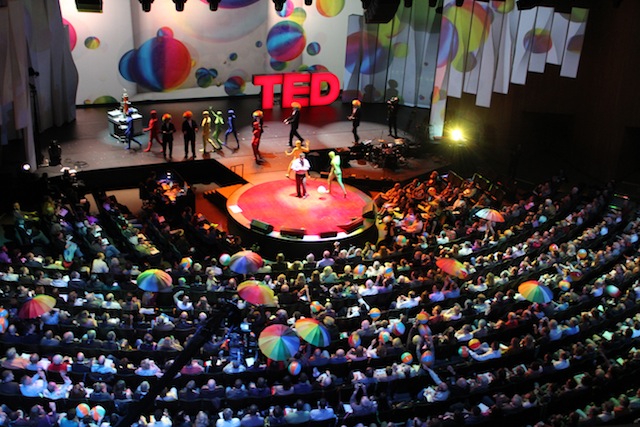 The performers left the stage and the umbrellas disappeared. The animation focused on one huge spinning beach ball that slowly shrank back to its original size. 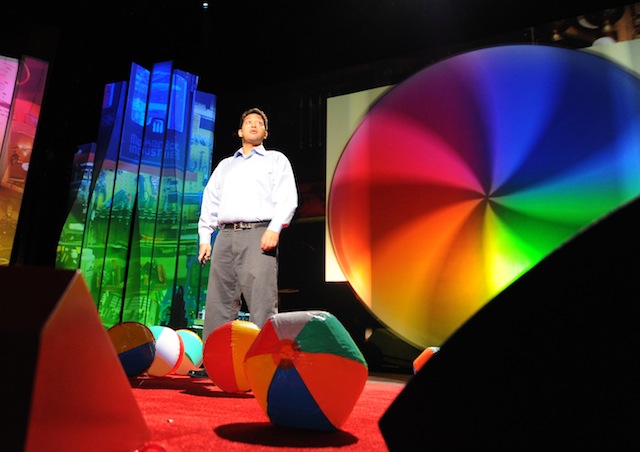 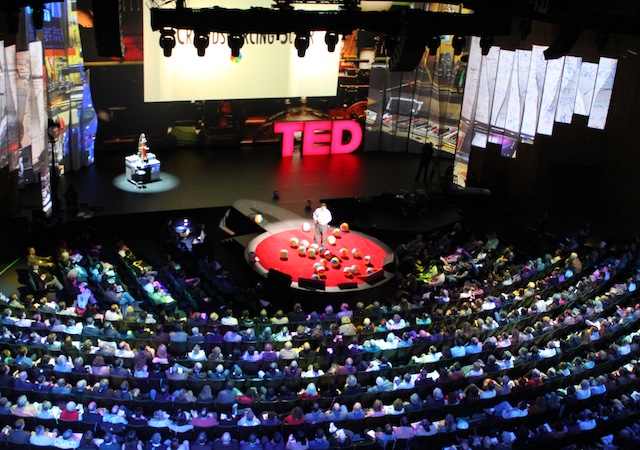 Agent Cordero found himself back where he started, alone on stage, now surrounded by a couple of dozen beach balls the TED crowd had tossed on stage during the excitement. 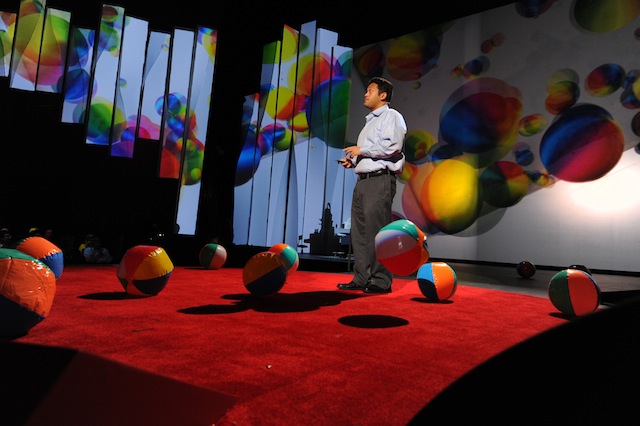 He attempted to start his presentation again, and then glanced at the stage manager, “That’s my time? Thank you very much.” He took a bow and left the stage nonchalantly. The whole thing lasted less than four minutes. It was a quick explosion of color and fun. It was a thrill to get to do something at TED, and so much fun to be able to stage something with their awesome tech capabilities. All of the performers besides Agent Cordero were TED attendees who signed up to take an Improv Everywhere workshop, not knowing what they were getting themselves into. Thanks to all of them for helping out, and thanks to TED for inviting us! 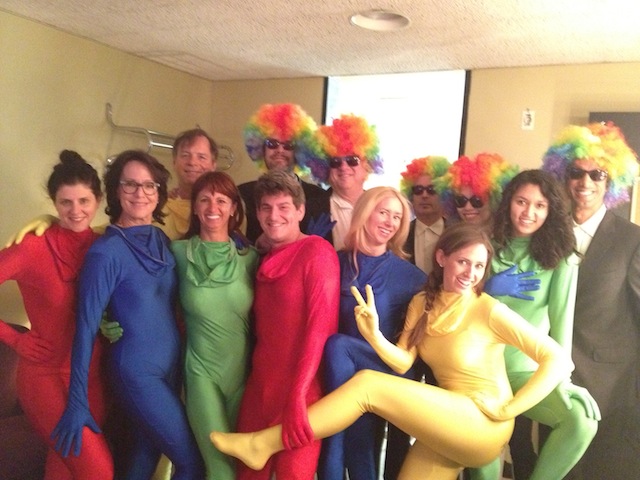 If you’d like to hire us to stage a surprise prank at your conference, please get in touch!

– Photographer James Duncan Davidson made a video of the project using just his still images: