PLEASE NOTE: This post was written in November 2004 about a week after our “Best Gig Ever” project. The This American Life episode about this project first aired in April of 2005 and has recently been rerun. While you’re here, please check out our more recent projects.

“I don’t know about you, but I feel like I have one life to live, and I choose to forever believe in what I felt that night. It’s my memory, and just because I was told it wasn’t real, doesn’t mean it didn’t feel real TO ME. What do I care just as long as I had a GREAT TIME?”

It didn’t take long for Ghosts of Pasha (GOP) to figure out what had happened to them. We figured GOP would find the site sooner or later. A simple Google search of their own name would surely lead them to it eventually.

As it turns out, they found the site only a few hours after it was posted. Someone on our mailing list must have forwarded the link on to the band. It seems some of the members of GOP are from the New York / New Jersey area originally, and a few friends of IE are also friends of GOP. Small world. 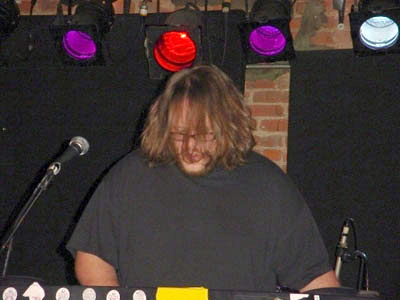 AGENT MILO FINCH (Vocals, Keys, Guitar)
As I drove home from the “best gig ever” the night was so aptly summed up by our guitar player when he said, “that was as creepy and unsettling as watching someone get hit in the back of the head with a pool cue and their eye popping out and rolling into the corner pocket.”

So you could imagine our relief from the strange felling when we found out what had really happened.

I was very hung over when I showed up to that show that night and really didn’t even feel like playing. But once we got into the swing of things is was business as usual for the band.

I couldn’t really see the crowd because of the lights in my eyes, so I never had a chance to see the fake tattoos and t-shirts. That would have been a big tip off to something being extremely wrong with the scene.

I have since been sent reeling into a paranoia questioning every person that I see. I even wrestled my waitress to the ground the other day because she seemed to be a little over zealous while taking my order.

I just want to say one thing to the “fans” that showed up that night: You know and I know that when the onstage tea bag happened you all rushed the stage out of pure rock and roll frenzy. 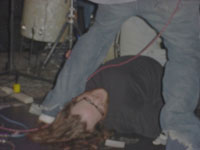 We rocked the place that night and you know it.

Thanks for a great night. I hope by the end of it all we really won you over as some true fans. Hope to see you again at one of our upcoming NYC shows.

This whole thing proves that all you need to do is put a few screaming fans in front of the Ghosts of Pasha and it won’t be long before we whip our cocks out and rock out. 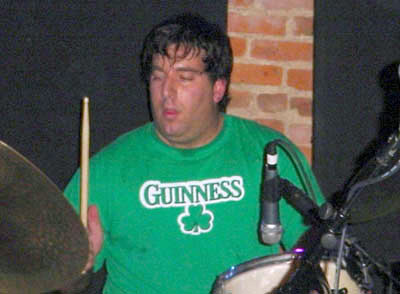 AGENT E-ZMONEY (AKAthecop) FROM THE GOP SQUAD (Drums)
I thought it was great, just when we needed people to come out to a show, you guys came through.

I knew something was up right away I wasn’t “caught unawares”.

I could tell there was some acting going on.

Chicken fighting? Fake tattoo? Come on! It was our second gig in NYC :}

Plus, have you ever been to a rock show in NYC? From the simple fact that you weren’t standing there staring with your arms folded raised a red flag.

I just moved out of the city a couple of months ago.

Who knows, maybe we know some of the same people!!! (wink,wink) Spread the word–we are. Check out this week’s issue of STEPPING OUT, I think you will find it interesting

See you all at Sin-‘e For the GLASTA OF PASHA show 8:00pm

over and out
agent E-z-money, GOP 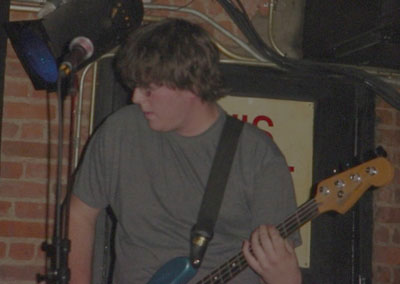 AGENT BRAD (Bass)
I don’t really care. I play the bass.
Ghosts of Pasha/Rock Beat!!!!
I go into the club. 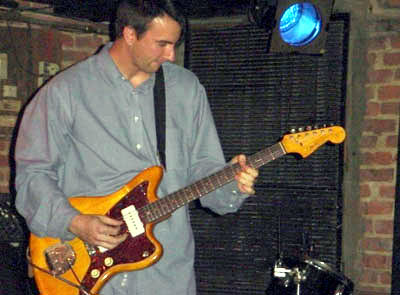 AGENT PARTYKA (Guitar)
First of all let me say that I had a great time and I have no negative feelings about this. This is also not the first time this has happened…We played a show a few months ago in Vermont where there were 100+ people chanting pasha,(really! it was so much fun..) and they were just as rowdy as you guys…you weren’t half as drunk as they were though…at least that I know of.. We just love to play and get really into it always…it just seemed unlikely that people in nyc, even though were from there(and our website at one point was #14 on gosites.com)..would know lyrics to songs that aren’t on the net…fortunately we were in the spirit of things and we aren’t jaded enough yet that we would stop the show and ask if it was a joke…we didn’t do it at our first 100+ show in Vermont and we would never stop a show anyway…its just too much fun.. Second, let me assure anyone reading the guestbook for improv everywhere that no one from this band would ever write in and be angry about this. Milo and I have backgrounds in theatre…you’d probably find if you hung out with us that we’re alot alike..*(except for that guy agent V, whom I heard really loves the band PHISH)

So any negative stuff you read there is not from us. Everyone seemed very nice. Its too bad that I’m very stage shy normally and never look at the crowd. Eho knows how excited I would have been if I saw makeshift ghosts of pasha tees. I might have even made eye contact with someone.

I read that someone posting in your guestbook was upset at you guys. That’s kind of stupid. We will take any exposure willingly given to us and we are very grateful to have been punk’d by the likes of you cats. Like I’ve already mentioned, we are all solid people and were strong enough to see this for what it is, which is a rocking good time had by all that just happened to start as a joke. We don’t care. I play because I love to, and we were feeding off of it and it made for a great show. So, everyone wins! I’ll close by saying this: Wouldn’t be great if there really were an outlet for Indie rockers and Hipsters to scream out their suppressed rage…football game style? Wouldn’t it be great if Indie rockers and hipsters could forget feeling self-conscious and just go “bat-shit?” I motion that we voluntarily vent our quiet Indie rock angst when we go see our favorite bands…fuck what everyone around thinks…just yell! Just dance! I don’t know about you, but I feel like I have one life to live, and I choose to forever believe in what I felt that night…it’s my memory, and just because I was told it wasn’t real, doesn’t mean it didn’t feel real TO ME. What do I care just as long as I had a GREAT TIME, and thanks to your improv troupe, I really did…Because honestly even though I would have pounded those songs out and still put my heart into it to 3 people like I always do. It was nice to trade energy with an adoring crowd, albeit a “fake” one…

THANKS AGAIN TO IMPROVEVERYWHERE FOR THE GREAT CROWD!!!!
-FROM ALL THE MEMBERS OF GOP-

You guys should make t-shirts and other memorabilia. I’d really like a t-shirt or a sticker that says something like “I’ve been punk’d by Improv Everywhere”. You guys are talented. I wish I wasn’t so shy when I play and that I looked up more. I don’t really have any memories to share with my band mates about it. I just played off of Milo’s reactions to you guys and stuck to that the whole time. Milo definitely has alot of specific moments he’s talked about. I think you guys helped show me that I shouldn’t shoe gaze so much. The point is though, our fire and energy originally comes from us, and then added in is whatever is going on around us filtered through Milo and our perceptions. What happened at Merc was perfect, intrinsically.

Ghosts of Pasha updated their website with a link to our report: 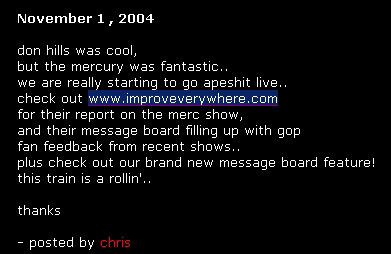 The remaining two members of Ghosts of Pasha play the IE 5th Anniversary Show nearly two years after this mission: