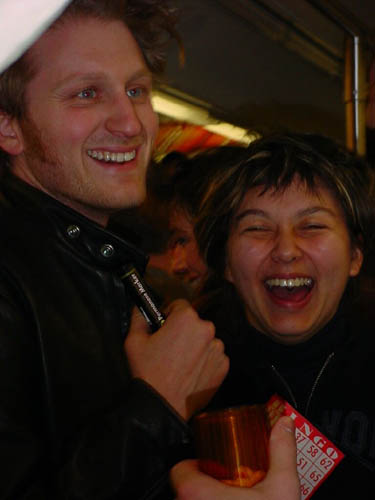 Improv Everywhere agents returned to the subway on Saturday, March 23 to continue their mission of creating happiness in an otherwise dreary locale. Much of what IE does can be summed up in two words: organized fun. The premise for this mission didn’t go much further than that. Our only goal was to get a subway car full of strangers to play bingo together. 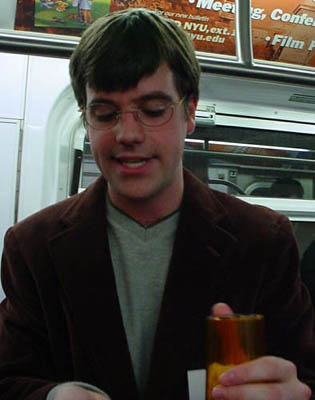 Bingo Charlie Calls the game
Agent Arnheiter and Agent Todd played the roles of The Bingo Dudes, Bingo Carl & Bingo Charlie. Both wore a “Bingo Dude” nametag on their shirts. The rest of the agents posed as strangers on the train who willingly played bingo, which would encourage others to do the same. Following tradition, the agents started their mission at the genesis of the 6 Train, the Brooklyn Bridge stop. 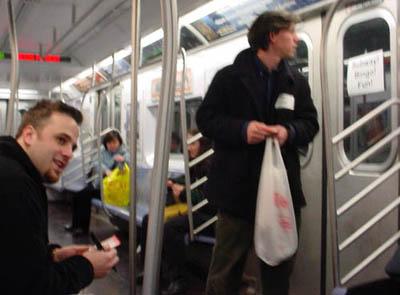 Agent Good and Bingo Carl
The Bingo Dudes raced around the car and taped up various bingo-related flyers on the windows and doors. Once the train began to fill, they made their introduction. 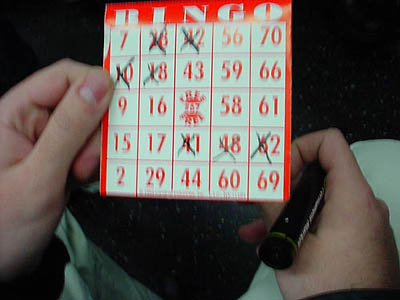 2 Away!
Bingo Carl handed out bingo cards and black magic markers while Bingo Charlie got ready to call out the game. The Bingo Dudes worked the crowd with their vast bingo knowledge. 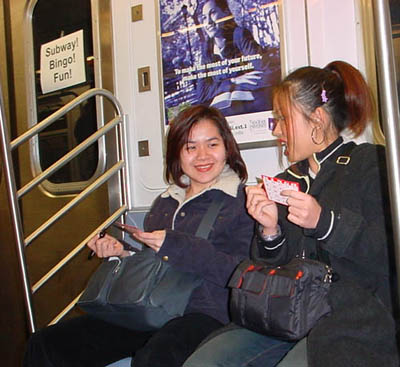 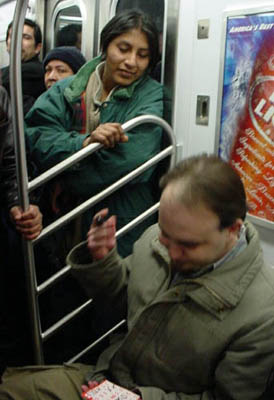 Agent Szilagyi plays while a stranger looks on.
Others preferred to watch others play rather than playing themselves. 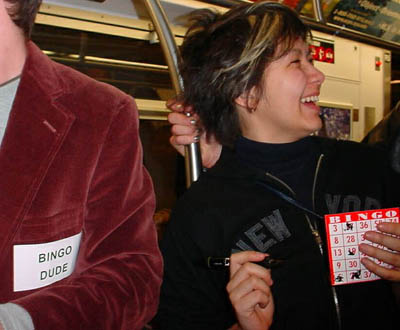 Bingo Charlie & a happy player
Bingo players rushed to get a bingo before their stops arrived.

Bingo Charlie: Let’s see if we can get a winner before Grand Central!! I know lots of you have to get off there, so let’s concetrate and win!
Bingo Carl: Hey Bingo Charlie, I don’t know if you honor requests, but this guy down here really needs B-9! 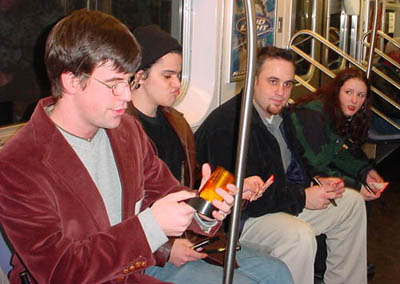 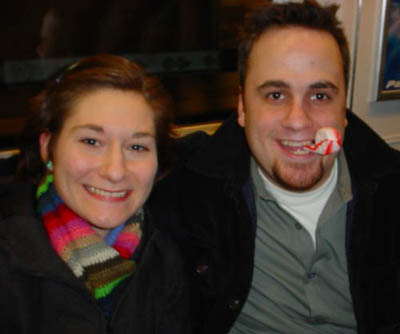 Agent Good with his bingo prize and new friend.
Many players, both strangers and IE agents, got bingos. Each time a player shouted “Bingo!”, the train errupted into applause, and the player was given his choice of a “fabulous prize.” The fabulous prizes included plastic flutes, police whistles, and troll rings. 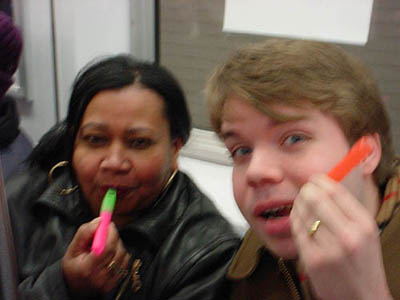 Agent DMartin also made a friend
Eventually the Bingo Dudes had given out all 70 of their bingo cards. The duo encouraged players to pair up and play along with a friend. This resulted in complete stangers holding bingo cards and playing together as a team. 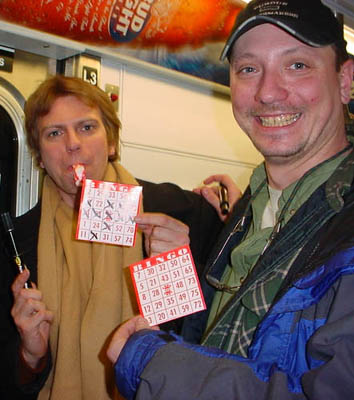 A stranger & his proud friend celebrate a bingo
Signs Posted on the Train: 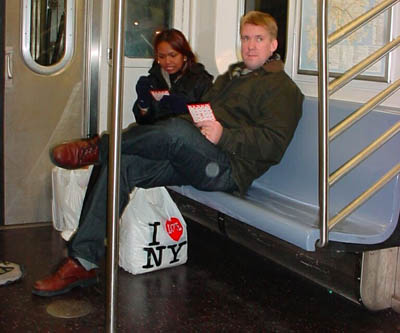 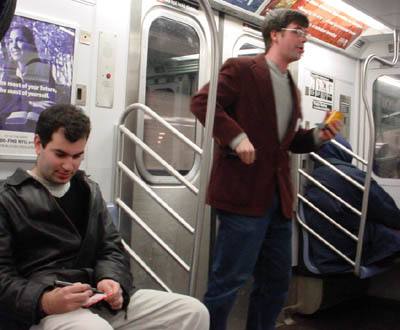 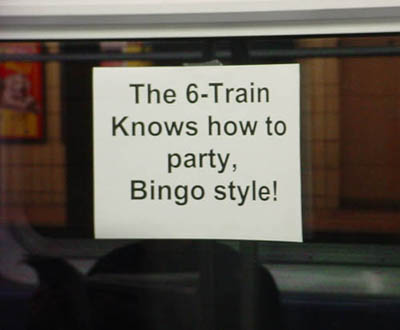 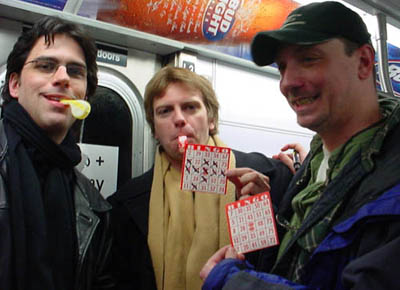 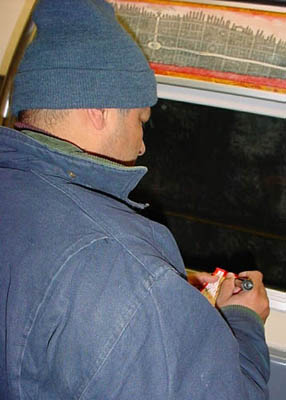 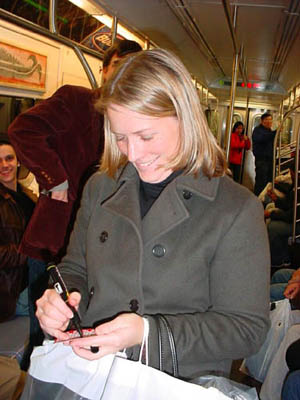 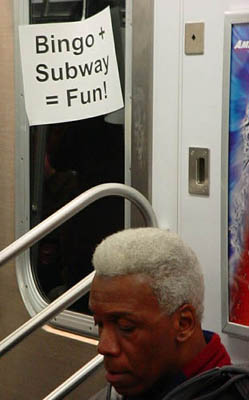 Often the most beautiful things are quite simple in their design. This mission was certainly simple, and watching strangers smile together a pull for their square to be called was beautiful enough for us.