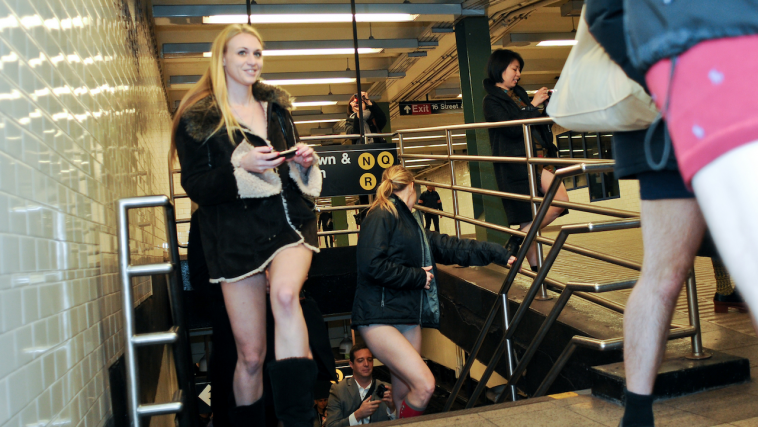 The No Pants Subway Ride was created by Improv Everywhere in 2002. It occurred every January in New York City from 2002 to 2020. The mission started as a small prank with seven friends and grew into an international celebration of silliness, with dozens of cities around the world participating each year.

The idea behind No Pants is simple: Random passengers board a subway car at separate stops in the middle of winter without pants. The participants behave as if they do not know each other, and they all wear winter coats, hats, scarves, and gloves. The only unusual thing is their lack of pants.

Here’s a video telling the story of the very first No Pants Subway Ride:

Below is an overview of the history of The No Pants Subway Ride dating back to its inception in 2002.

The 16th Annual No Pants Subway Ride took place on January 8, 2017 in cities around the world. In NYC it fell the day after a snowstorm and featured single digit wind chills. Brrr!

The 15th Annual No Pants Subway Ride took place on January 10, 2016. It was rainy and unusually warm in NYC. Riders participated all over the world from Tokyo to Jerusalem. The Moscow ride drew attention from local police who called in the organizer for questioning a few days later. He was released without charges.

The 14th Annual No Pants Subway Ride took place on January 11, 2015 and once again happened all over the world. Officials tried to ban it in Latvia, but relented once the media got a hold of the story.

The 13th Annual No Pants Subway Ride took place on January 12, 2014 in over 60 cities in over 25 countries around the world and included tens of thousands of participants.

For the twelfth annual No Pants Subway Ride, over 4,000 people participated in New York with tens of thousands more participating in 60 cities all over the world, including debut rides in Shanghai and Hong Kong.

For the eleventh annual No Pants Subway Ride, nearly 4,000 people participated in New York with tens of thousands more participating in 59 cities in 27 countries around the world, including a ride in Istanbul where the riders were arrested!

For the tenth annual No Pants Subway Ride, 3,500 people participated in New York and thousands more in 48 cities across the globe.

For the ninth annual No Pants ride, over 5,000 people took off their pants on subways in 44 cities around the world. In New York, we had over 3,000 participants, spread out over six meeting points and ten subway lines.

The eighth annual No Pants ride had 1,200 participants in New York and well over 1,000 more in 21 other cities across the globe. The New York ride took place during a snow storm (a first) and was carried out on four train lines.

The seventh annual No Pants ride had 900 participants in New York and was the first year to go international, with 9 cities joining the fun. In New York we had to use three separate train lines to accommodate the crowd. For the first time there were at least as many women as men. This was the first year we invited other cities to participate as well. Rides took place in Baltimore, Boston, Chicago, Portland, San Francisco, Salt Lake City, Toronto, Washington DC, and even Adelaide, Australia. The Today show even mentioned the event: video.

In sharp contrast to the year before (see below), the sixth annual No Pants went off without a hitch. 300 people participated on what was a particularly mild January day. Three police officers showed up at our meeting point, but they informed us they were only there to make sure everyone had a good time. We dropped the “pants seller” bit this year after too many people lost their pants in 2006. Instead, participants hid their pants in a backpack. This was the first year No Pants really started becoming diverse, with people of all colors, shapes, sizes, and ages participating.

The fifth annual No Pants ride was abruptly halted by a cop. All passengers, including those not participating, were forced to exit the train as it was taken out of service. 8 people were handcuffed in their underwear and taken into custody. A month later a judge dismissed all of the charges. It is not illegal to wear your underwear in public in New York City. Just ask the Naked Cowboy. The incident was reported by news agencies around the world. David Letterman made two monologue jokes, about it and staged a No Pants Cab Ride as a parody. Keith Olbermann interviewed Agent Todd about the legality of No Pants. Around 150 people participated in the ride.

The fourth No Pants was filmed by This American Life for their Showtime television show. The segment on Improv Everywhere aired as part of their pilot episode, but almost all of the No Pants footage was cut from the piece. We didn’t film it ourselves, so no video exists. Around 50 people participated.

The third No Pants was filmed by ABC News 20/20 for a segment they were doing on Improv Everywhere which never aired. Bill Ritter, a 20/20 correspondent, rode the train with us but elected to keep his pants on. About 40 people participated. We did not film it ourselves.

The second No Pants had around 30 participants, including a few women. A few people played characters for the first time– businessmen, tourists, etc. The conductor noticed what was going on and shouted over the PA, “This train is not a playground.” There is video footage, but it has never been put online. Maybe one day.