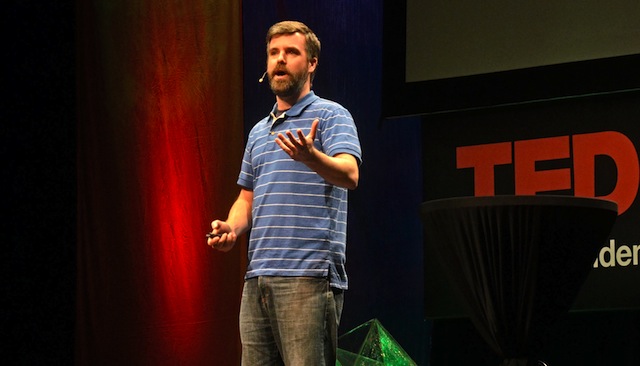 Improv Everywhere founder Charlie Todd can be booked to speak at your school, conference, or corporate event. Charlie is a seasoned keynote speaker, and his TED Talk has over 3 million views.

Charlie speaks on the topics of creativity, the importance of play, and how creators can harness the power of the web to reach a worldwide audience.

Charlie has given talks at conferences, college campuses, and festivals around the world. Highlights include TED, PopTech, GEL, The New Museum of Contemporary Art, The Museum of Modern Art, the Cannes Lions International Festival of Creativity, Design Indaba in Cape Town, the InterFilm Festival in Berlin, the Adelaide Fringe Festival, Art Futura in Barcelona, University of Notre Dame, and Carnegie Mellon University. He’s also given presentations directly to brands like Nike and Heineken.

For any business-related inquiries regarding keynote speaking engagements, festival or conference bookings, or custom surprises, please reach out at office {at} improveverywhere.com

“Improv Everywhere is fighting the good fight to keep NYC unpredictable, off the grid and balls-out funny. I mean, how could you not laugh at someone setting themselves up as a bathroom attendant at the Times Square McDonald’s or staging a synchronized-swimming performance in the Washington Square Park fountain?” – Dan Avery, Time Out New York

“Improv Everywhere tramples the lines drawn between spectacle and spectator, theatre and real life, public and private, performance and protest, and reclaims the streets for ordinary people.” – Lyn Gardner, The Guardian

“Improv Everywhere is reliably hilarious to millions of people. The masters of mischief. [The Frozen Grand Central stunt] is one of the funniest moments ever captured on tape.” – Martin Bashir, ABC News Nightline

“The largest network of pranksters ever assembled, Improv Everywhere is the leading light in the Golden Age of the Prank. YouTube gods.”- Maxim

Press articles and videos are available on our press page.