For our latest mission, we turned a very hot New York City subway platform into an unauthorized luxury spa. NYC’s un-air-conditioned platforms can feel like a sauna in the summer, so we figured we might as well embrace the heat. Our spa’s complimentary services included infused water, towels, sauna benches (already provided by the MTA), hot stone massage, and a human-powered steam room misting station. Random New Yorkers were encouraged to join our performers and use the services and quite a few took us up on it. 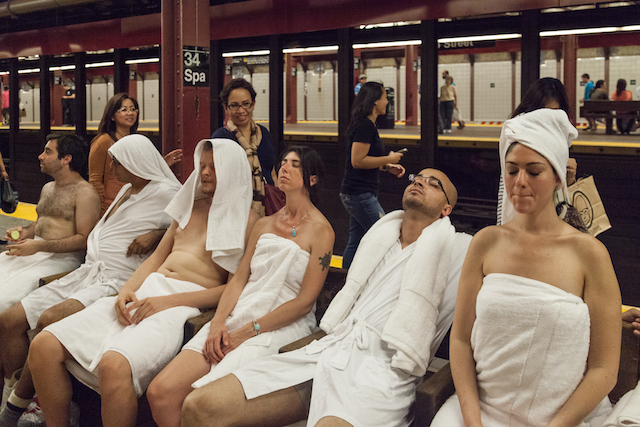 New York City summers can be miserably hot, and the hottest spot in town, in my experience, is the NRQ platform at 34th Street. With the exception of Grand Central, none of the subway platforms are air-conditioned. Subway cars are air-conditioned, but in a cruel twist of fate, it’s partly the heat generated by their A/Cs that make the platforms so miserable. When I lived in Queens, the NRQ 34th St platform was my mortal enemy, its sticky heat making those late nights waiting for the train seem even longer. To me it feels hotter than any other platform in the system. When this idea came about, I knew it was the perfect spot.

Many years ago I had the idea of turning an un-air-conditioned subway car into a sauna with performers in towels. Every so often in the summer you’ll accidentally step into a car with broken air-conditioning, briefly considering yourself lucky to find an empty car before realizing the reason why it is empty. I never got around to staging this because I couldn’t logistically figure out how we’d be able to reliably find a car with broken A/C. Plus, there would be no audience, as no one in their right mind would enter the car. The idea remained on the back burner until Louis Walch emailed me and suggested a similar idea that would take place on the platform. The platform! Of course! It’s reliably hot and there is no escape. 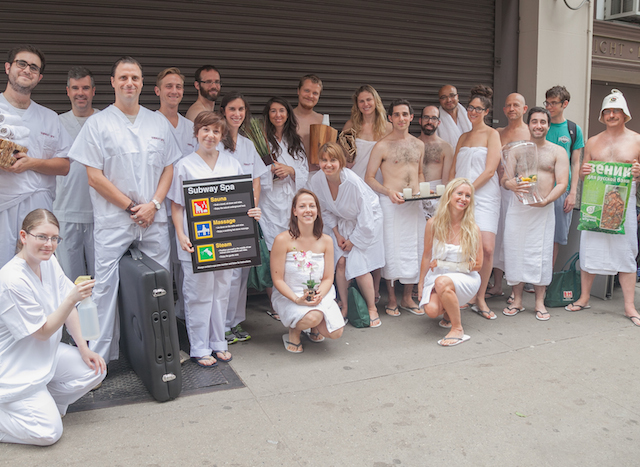 Subway Spa cast, pre-sweat
We met at the Deverge office and the walked over to the nearby 28th Street station. We had to ride the train one stop north to get to the 34th Street station, which was a pretty funny site itself. 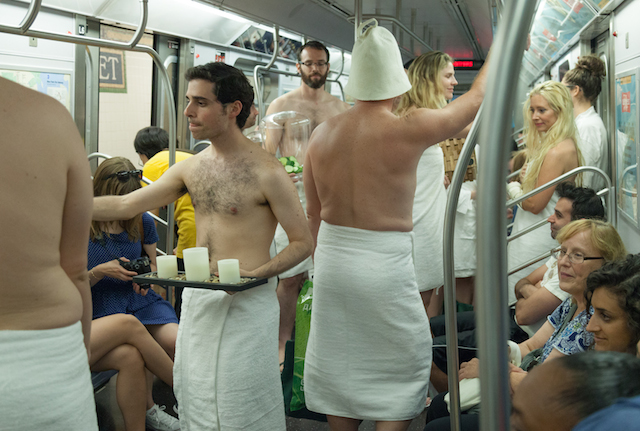 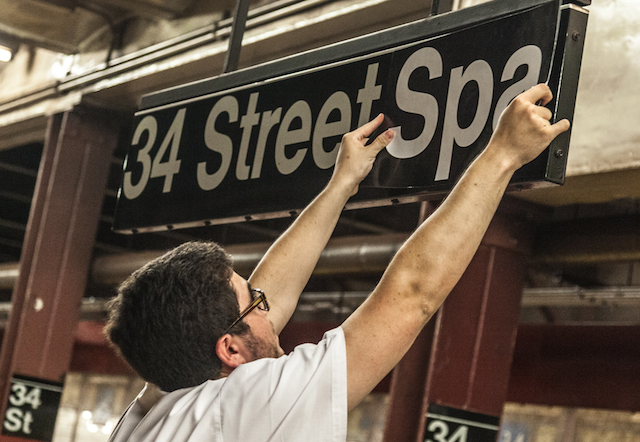 Agent Clark Frankel puts up our magnet
Once we arrived at 34th, we immediately began setting up. We made some big magnets that read “Spa” and put them up around our performance area. We designed these so we wouldn’t cover the “34” to avoid causing any confusion. The signs blended in so well I think most people didn’t even notice them. Those that did got a nice laugh. 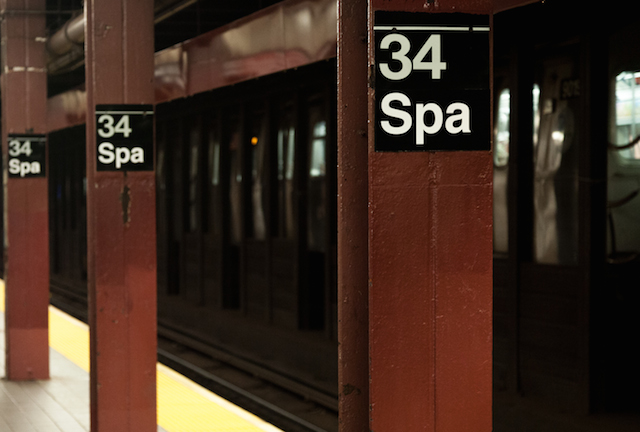 While we’ve staged many projects in subway cars over the years, we have very rarely staged anything on the platforms. The most recent was in 2008 when we turned the 23rd Street C/E platform into an art gallery. Safety was obviously a concern. To keep this as safe as possible we kept our cast small (only about a dozen folks in towels) and kept our tables and props in the dead center of the platform, evenly spaced out to allow people to pass on all sides. 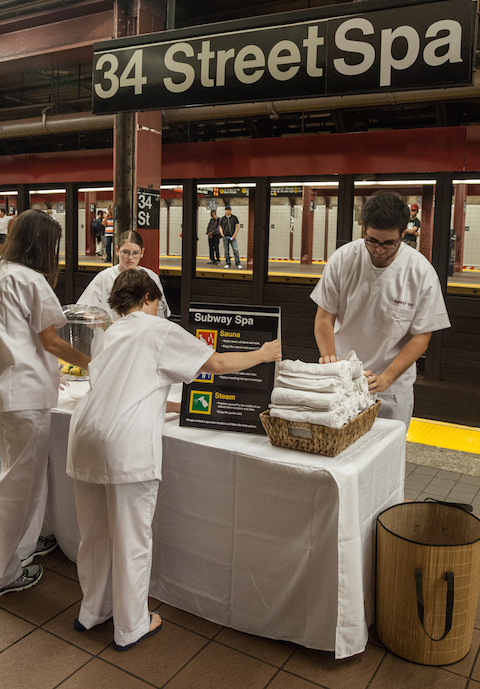 Setting up the welcome station 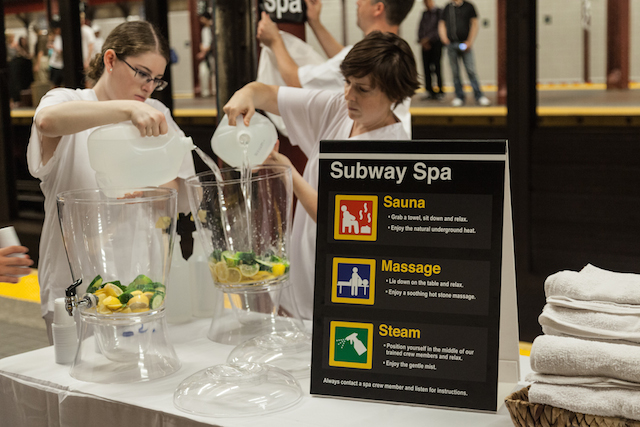 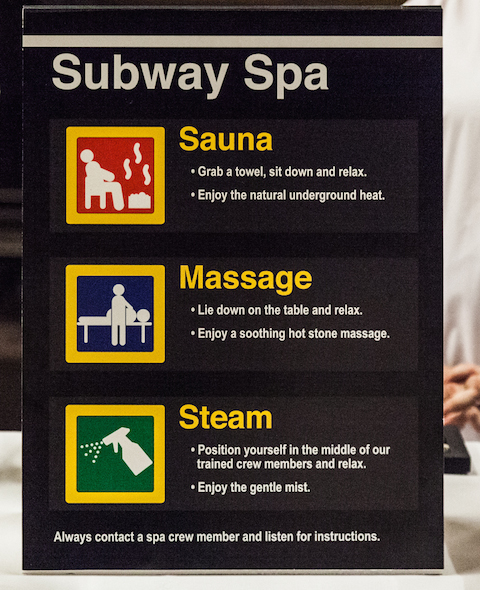 After our stations were set up, the actors began arriving in towels. 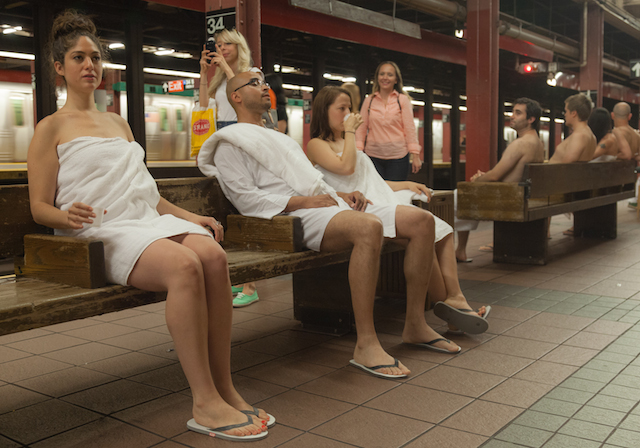 The sauna
The brown wooden benches in the subway system already look similar to the type of benches found in a sauna, making our decorating job easy. 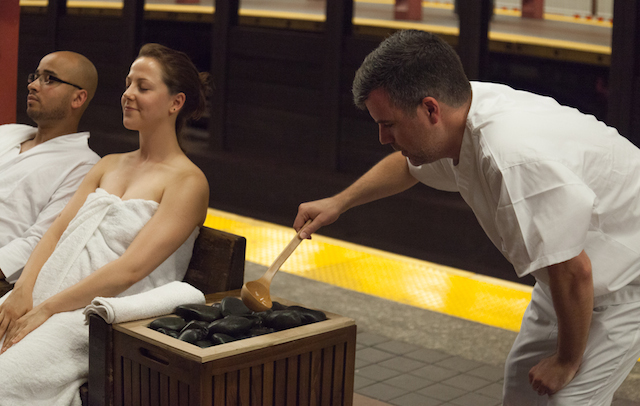 We added some rocks along with a bucket of water and a ladle. 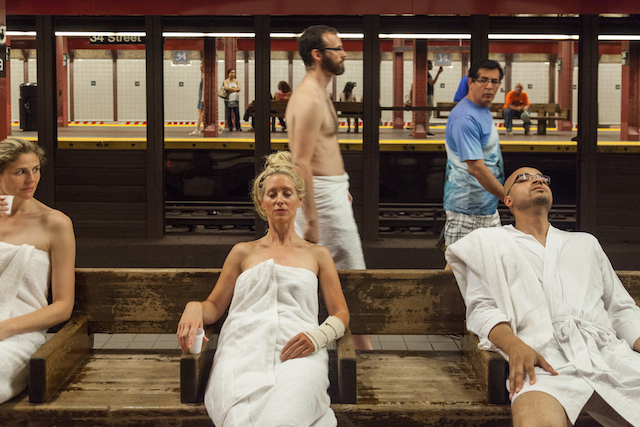 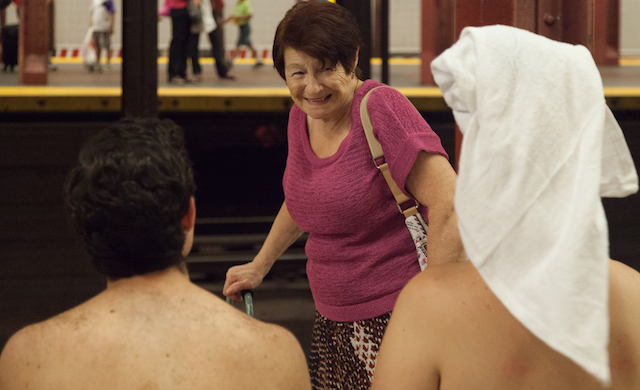 We got tons of great reactions from the other New Yorkers on the platform. 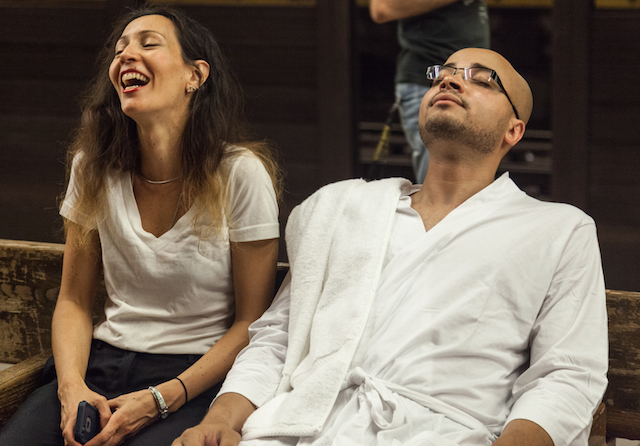 Lots of people sat down next to our performers. 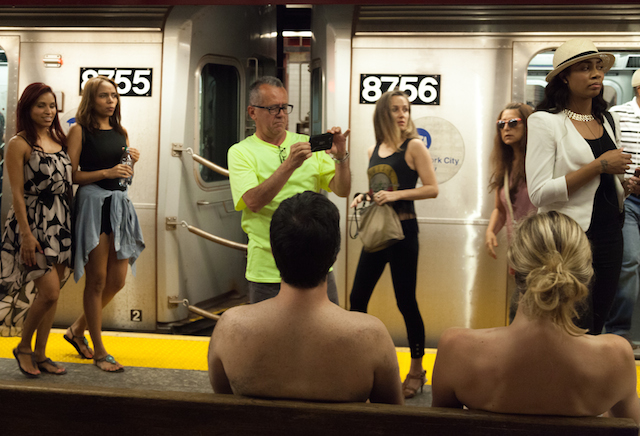 Every couple of minutes a new train arrived and a new crowd of people stumbled upon our spa. 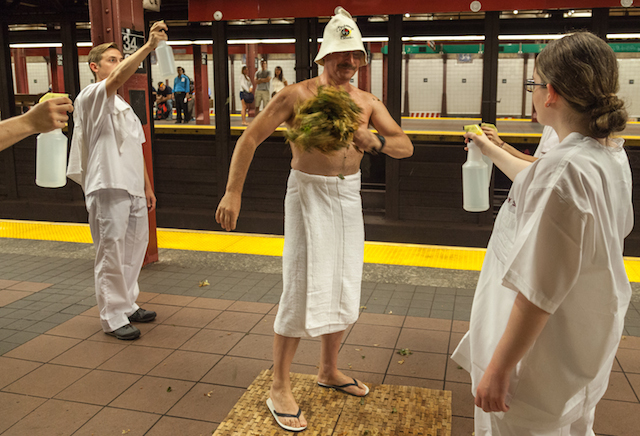 Agent Dmitry brought his own Russian sauna branch for use in the “steam room.” Our steam room was a teak platform surrounded by four people with spray bottles of water. They provided mist for anyone who wanted to cool down. Quite a few regular subway riders took advantage of the offering. 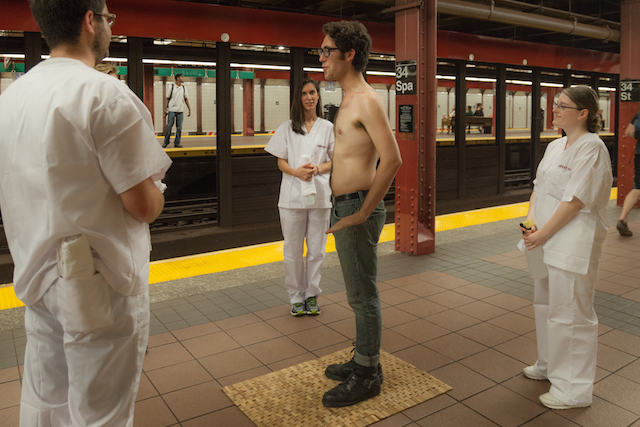 This guy was the first non-participant to use the steam room, and he even took his shirt off to get the full effect. 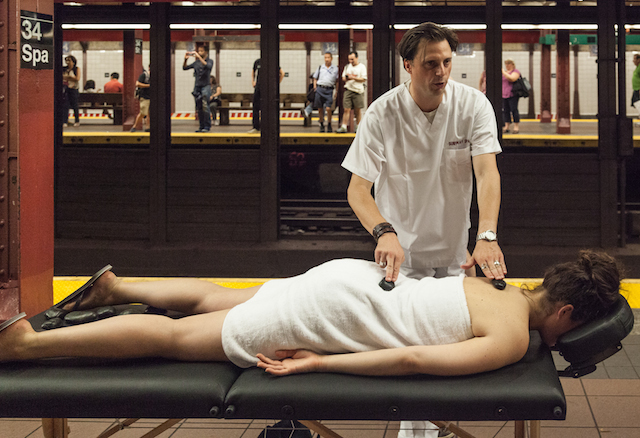 Despite having no training whatsoever, Agent Todd Simmons was on hand to provide hot stone massage. Participants reported it actually felt quite nice. 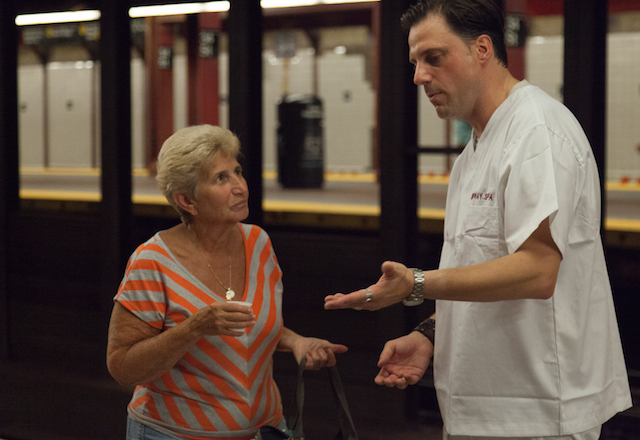 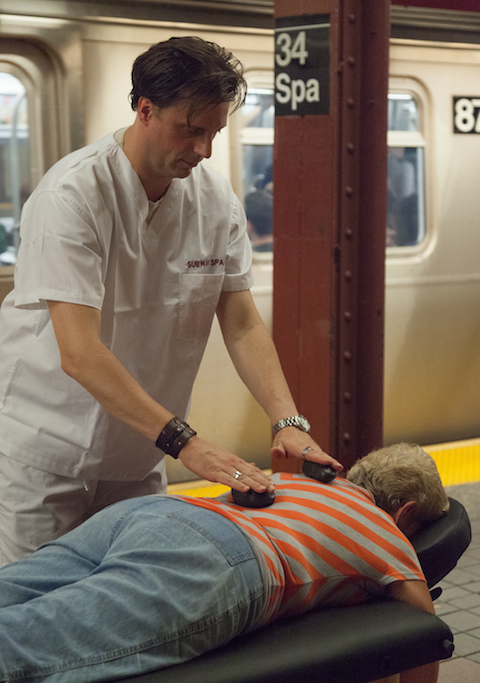 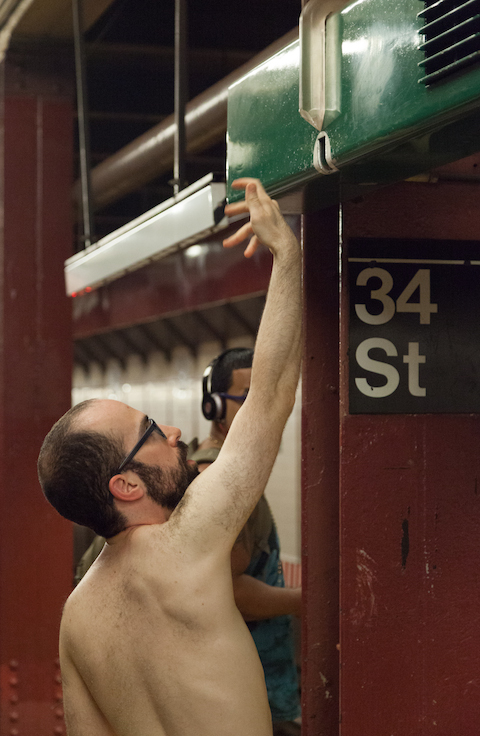 Agent Keith Haskel activates the music
Another reason why we chose this particular platform is it contains the awesome art installation REACH: New York by Christopher Janney. Installed in 1995, the installation allows passengers to create music by waving their hands in front of sensors. It’s always been my favorite piece of art in the subway system. It enables complete strangers to interact together and share a smile, a goal shared by Improv Everywhere. Honestly, it’s the only redeeming thing about this sweltering platform! The music it produces contains lots of wind chimes and bird noises– very similar to the type of relaxing music you might hear at a spa. Perfect! 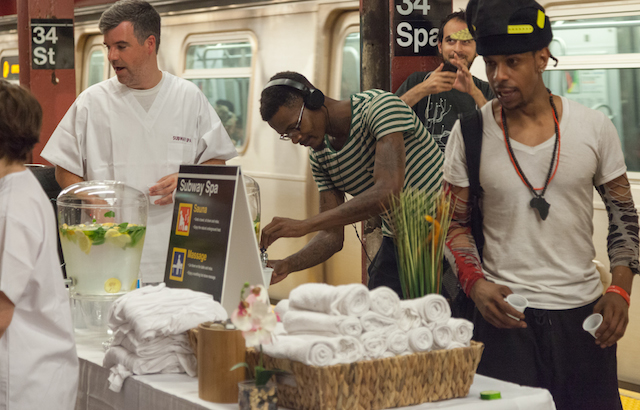 People taking advantage of our lemon and mint infused water 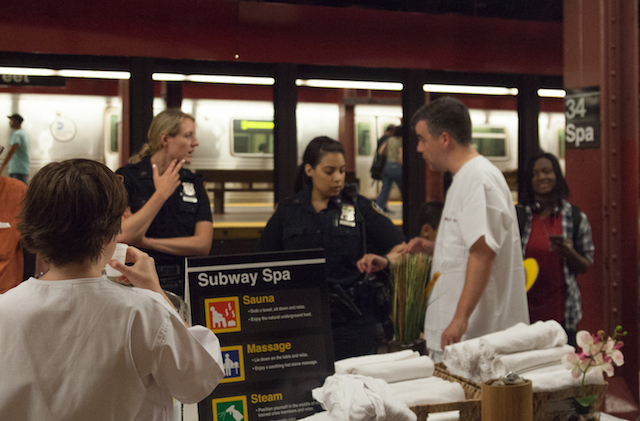 Midway through our performance, two police officers strolled by. They were laughing when I approached them. They got it and were very nice about it but did say they’d have to come back if they received any complaints. I let them know we’d be gone soon. 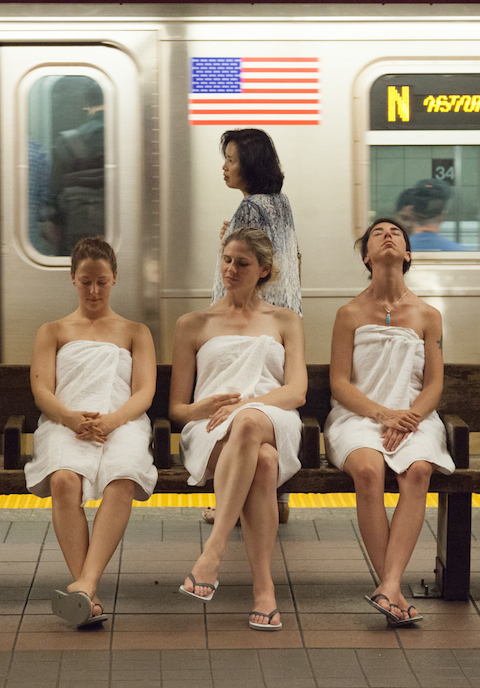 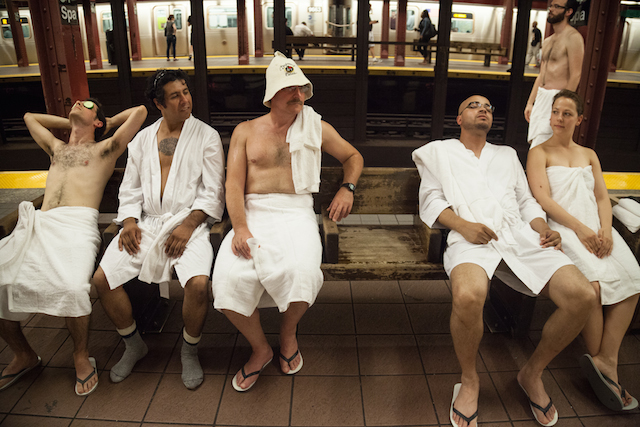 The guy wearing socks was NOT of our performers. We had a few robes at the welcome station in case anyone wanted to join in, but we figured no one actually would. Not only did this guy strip down and put on a robe, he sat there for a half hour! It looked like he was with family when he first arrived, but I guess he ditched them to enjoy our sauna. 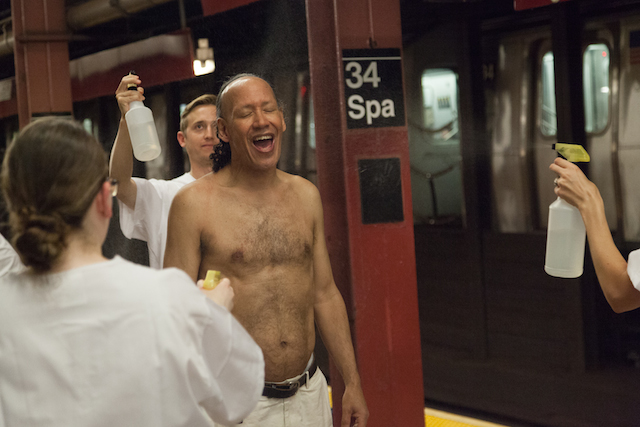 This guy was very excited about the spa and tried out every station. He particularly enjoyed the steam room. 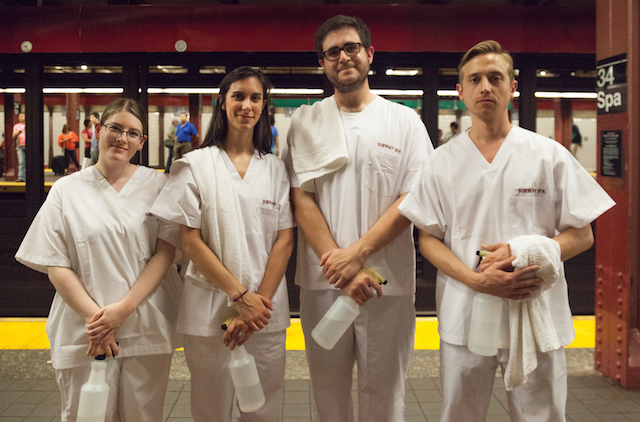 Steam room staff: Jewel Frankfeldt, Katherine Maughan, Clark Frankel, Evan Gregory
We stayed on the platform for an hour or so before packing up. We were all pretty sweaty by the end of it. We cleaned everything up, removed the magnets, and disappeared on a downtown train. 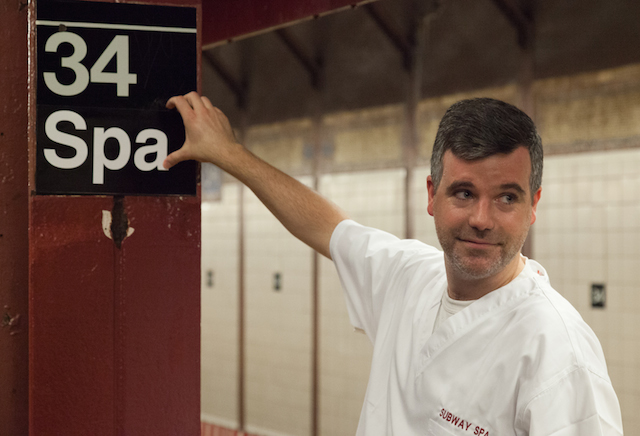