For our latest mission, we sent an 11-year-old actor dressed as Harry Potter into New York’s Pennsylvania Station to search for Platform 9 3/4. Harry wandered the station with a caged owl and a luggage cart and asked both strangers and transit employees how to get to the Hogwarts Express.

Here is a behind-the-scenes video that shows what happened when Harry tried to get a cab to the airport: 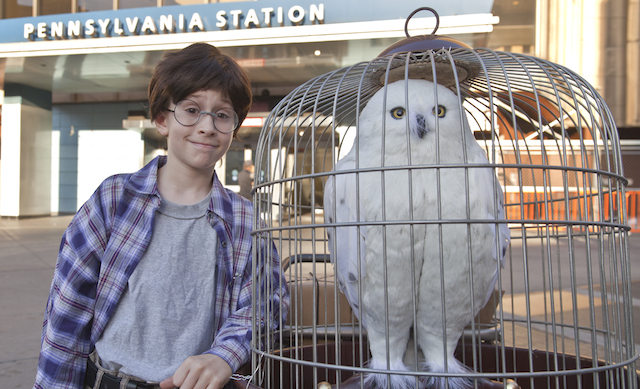 This mission stars Agent Sebastian Thomas, who you might remember from our Mall Santa Musical a couple of years back. 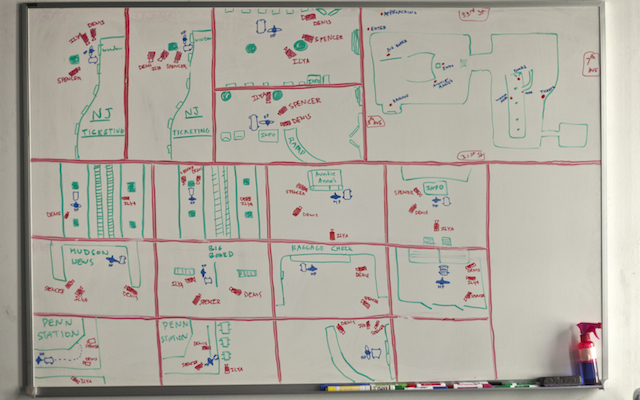 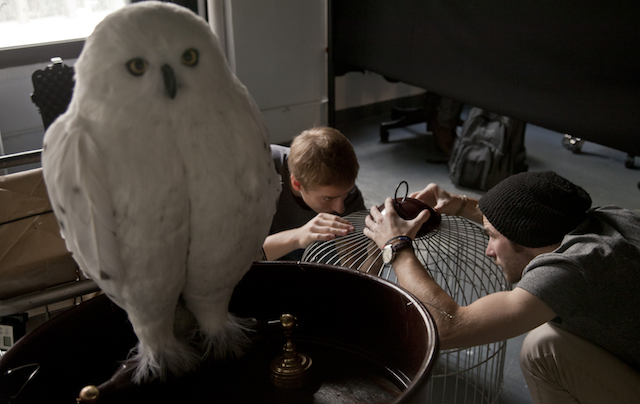 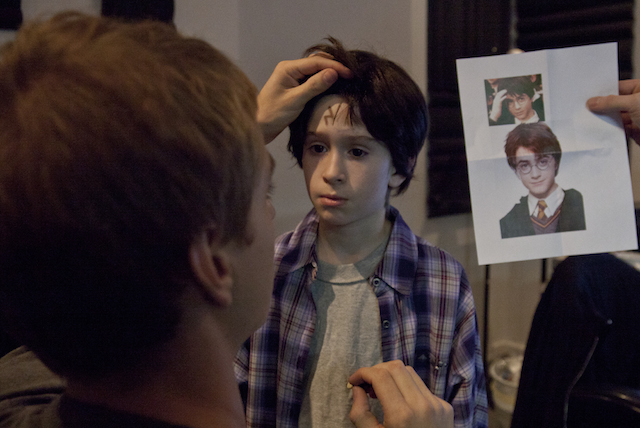 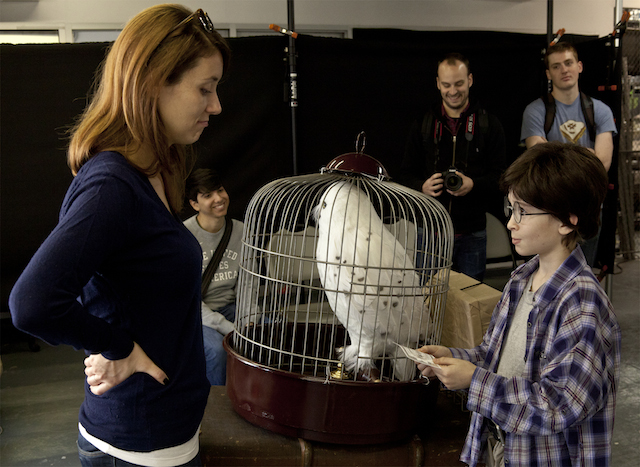 Agent Cody Lindquist plays a stranger in a rehearsal with Agent Thomas
After some rehearsing, we headed over to Penn Station, entering from the 7th Avenue side and heading to the NJ Transit area first. 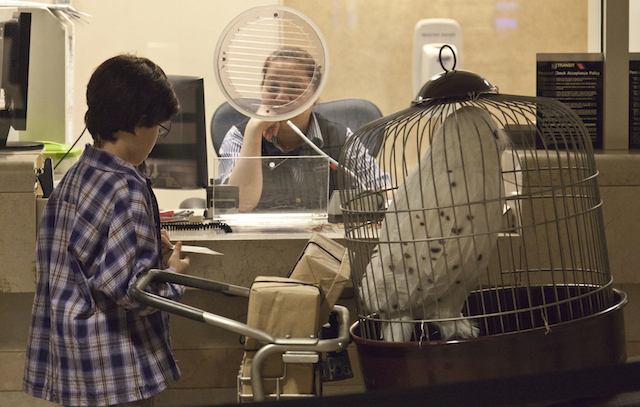 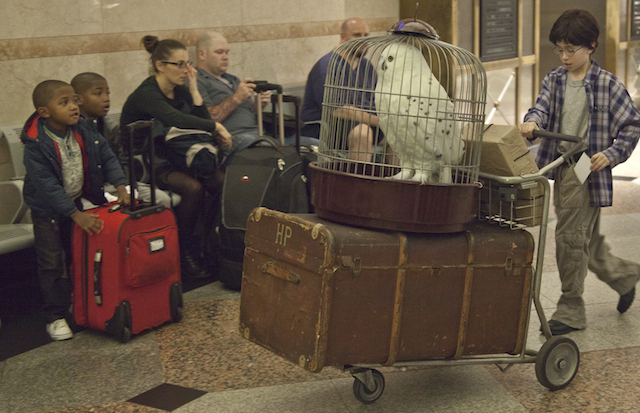 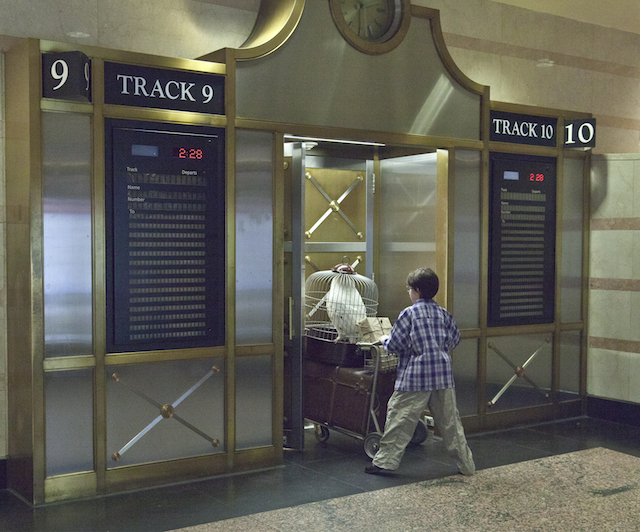 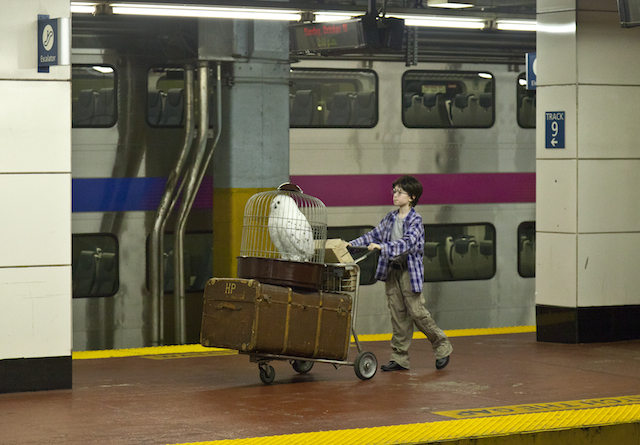 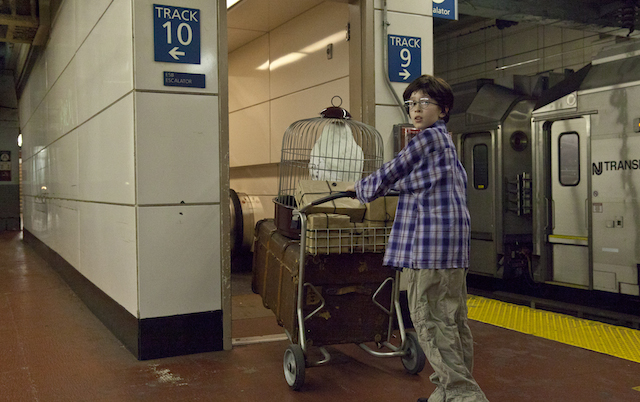 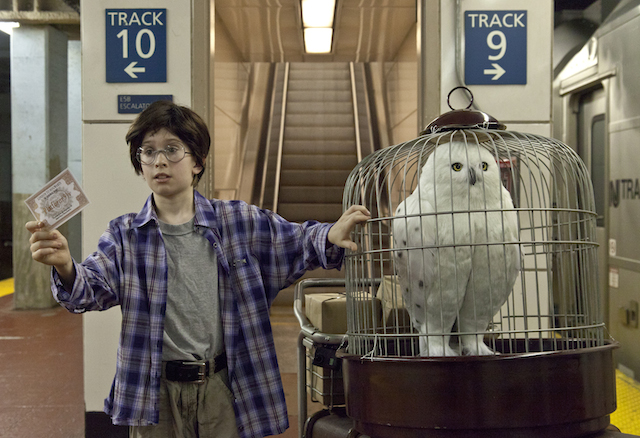 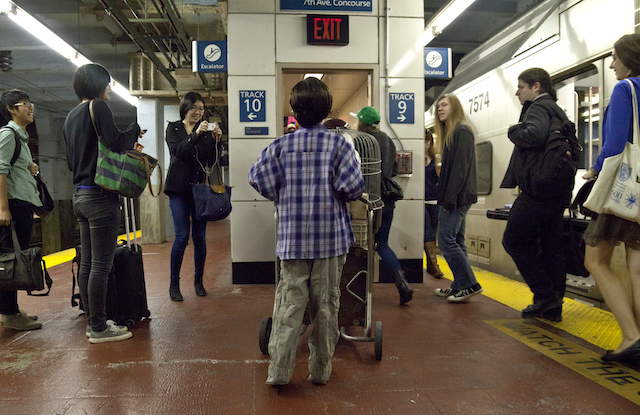 As Harry was trying to figure out how to get to the platform, a train arrived on platform 9. It was great fun watching people react to Harry as the exited the train. 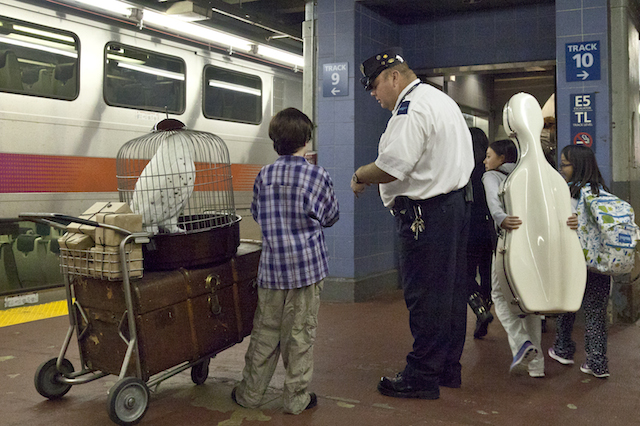 The conductor scolded Harry for obstructing the stairway entrance (Harry wasn’t actually doing this.) The conductor was not able to help Harry find Platform 9 3/4. 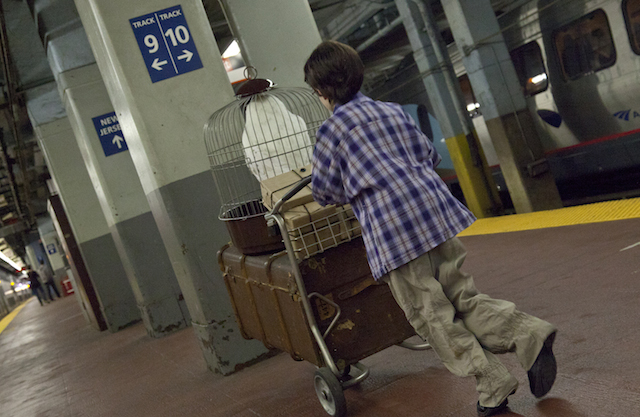 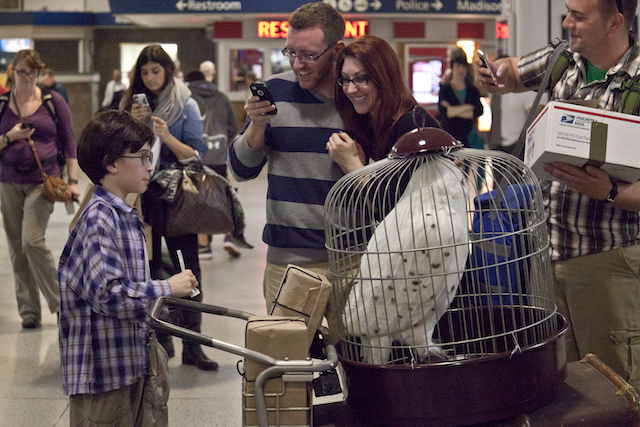 Harry headed back upstairs to the main concourse to see if anyone could help him there. 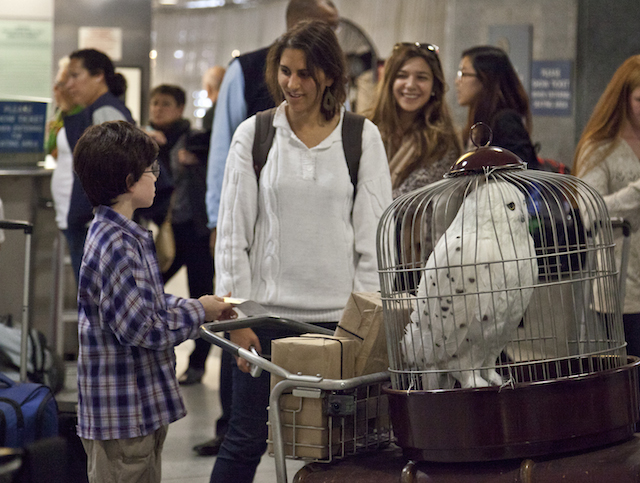 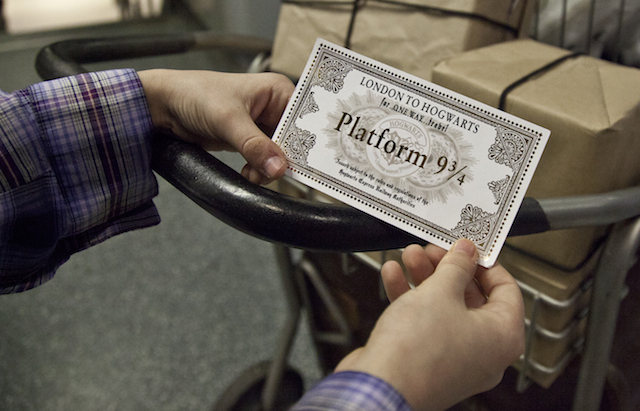 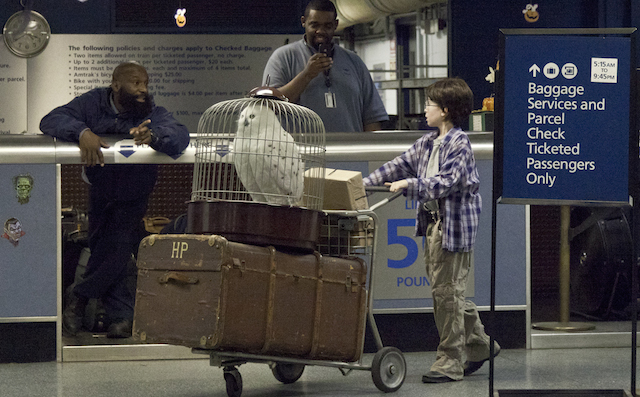 Harry stopped by the baggage claim area to see if he needed to check his trunk. 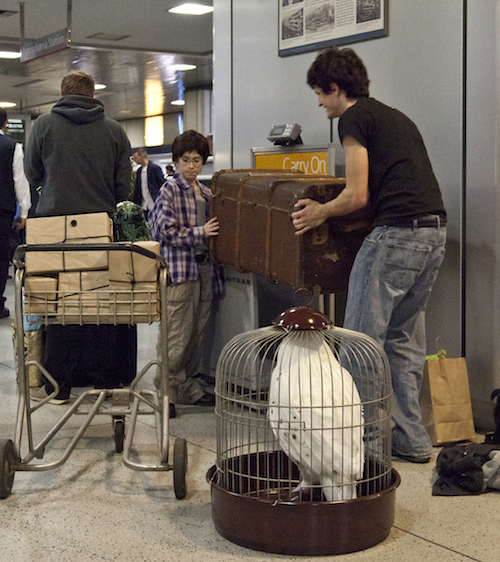 This stranger helped Harry check to see if his trunk would fit in the carry-on size checking slot. It did not. 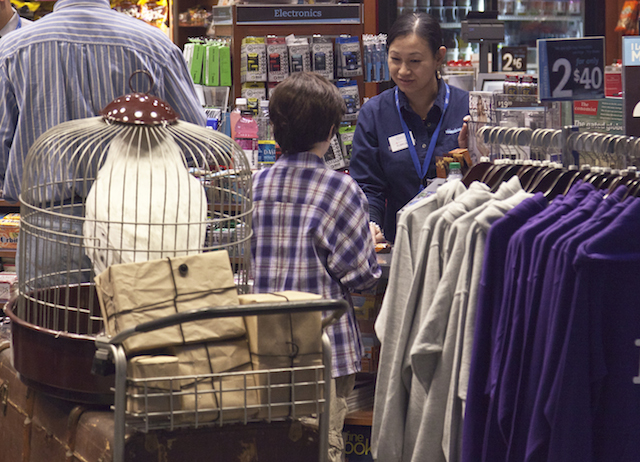 Harry went into Hudson News to buy a candy bar. He tried to pay with it in “wizard currency” but the clerk informed him she couldn’t accept it. It was actually Canadian money. 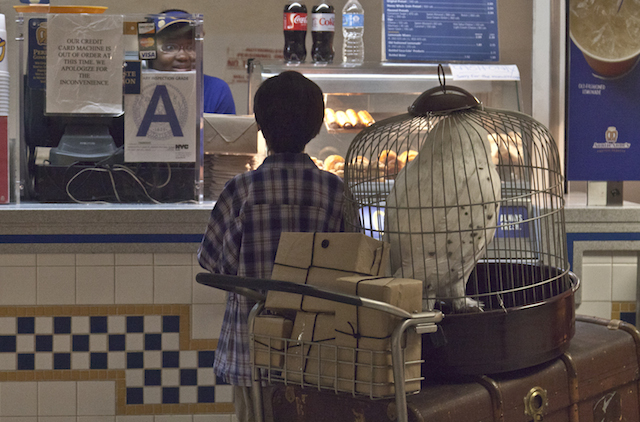 Harry then stopped by Auntie Anne’s and asked the employee there if pretzels were “good for Owls.” She was incredibly nice to him and gave him a free pretzel, though Harry insisted on giving her some wizard currency. 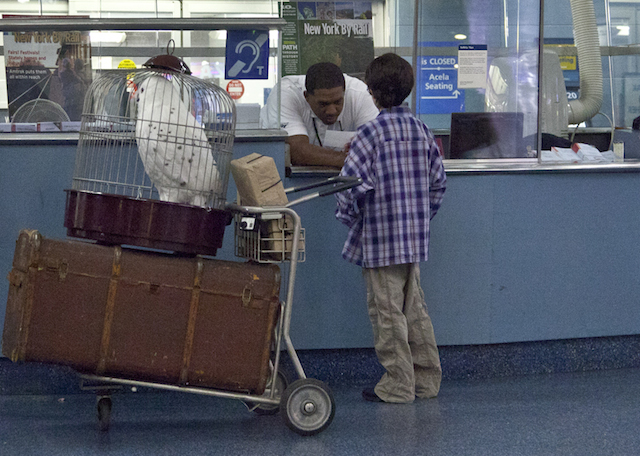 Harry had a long conversation with a man at the Amtrak help desk. He eventually left his booth to get a better look at the owl. He was incredibly nice, but he was growing increasingly concerned about an 11-year-old boy traveling alone and was close to calling security, so I stepped in and told him that I was with Harry. We chatted for a bit and then he noticed one of our GoPro cameras, hidden on the luggage cart. That’s when everything clicked for him and he started laughing. 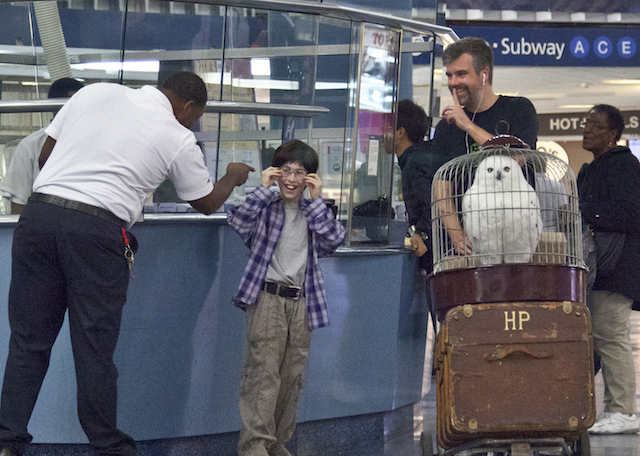 Agent Thomas laughing with the Amtrak employee as I tell him to keep quiet about our cameras! 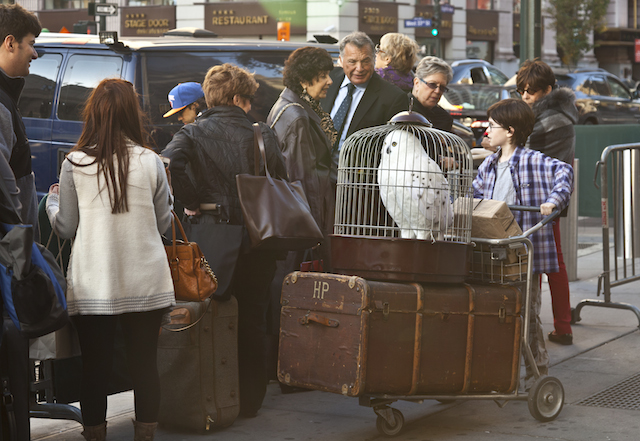 Harry figured he needed to find an alternate method of getting to Hogwarts, so he headed outside to the taxi line. 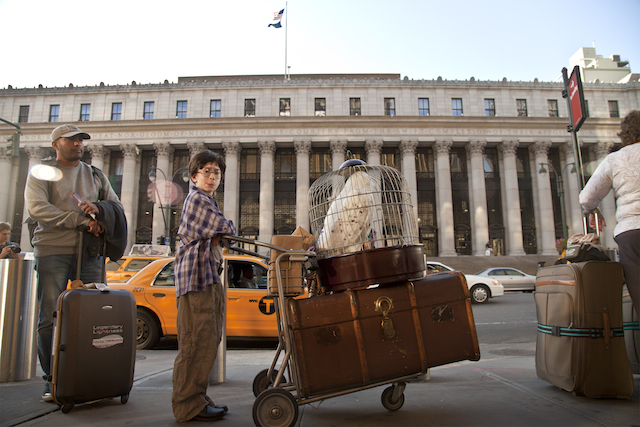 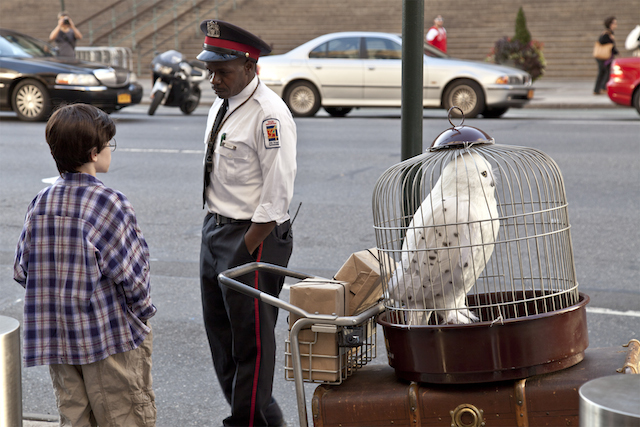 The guy in charge of the taxi line was very friendly, but struggled with how to help Harry get to Hogwarts. 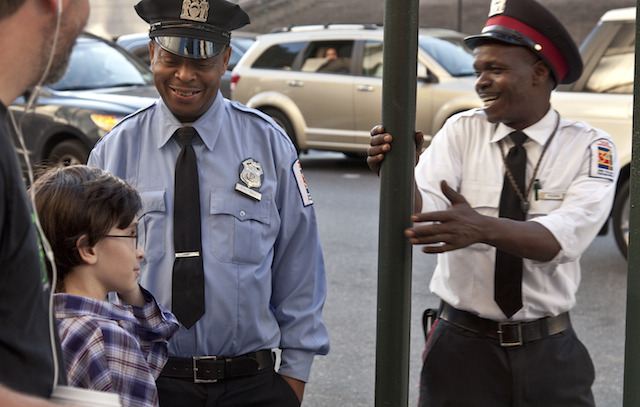 Another security guard came over a bit later and started laughing at Harry, which caused the first guy to get what was going on as well.

We had a great afternoon staging this and it was so much fun watching people react to Harry. Agent Thomas gave a flawless performance, despite the really tricky circumstances of performing undercover in a massive transit hub. 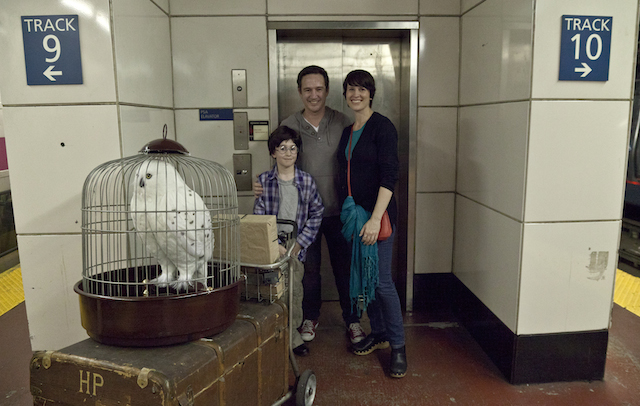 Agent Thomas with his mom and dad
Come back next Tuesday for the next installment of Movies in Real Life. Sign up for our email list or subscribe on YouTube to be notified when the next one is posted!