For our latest mission we recreated the famous fake orgasm scene from When Harry Met Sally with 20 women in Katz’s Deli. This was staged without the knowledge of the restaurant, though thankfully they all seemed to love it.

Here’s some behind-the-scenes footage of our rehearsal: 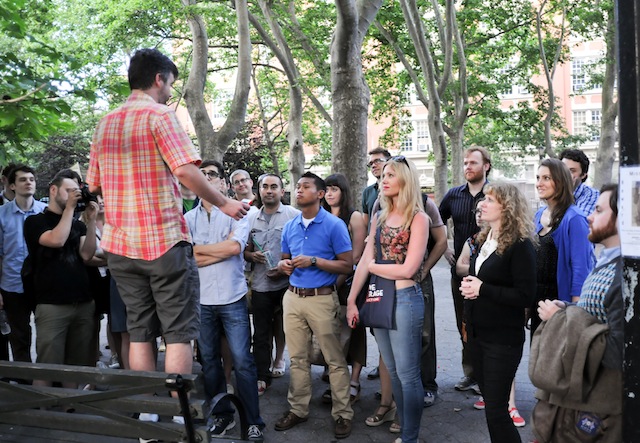 Pre-mission meeting
First off, I need to say that I’m incredibly thankful for all of the awesome ladies (including my wife!) who were game to help out with this project. They had the hard part, and they all did it fearlessly. 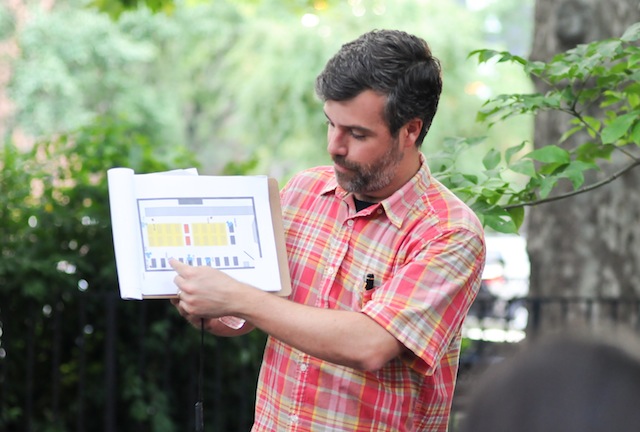 We met in a park near Katz’s Deli and went over the game plan. When you’re doing something in a place of business without their permission, things can get really complicated. We needed to get some very specific tables for cast and crew members. Katz’s is always crowded and it’s often hard to get ANY table, much less a bunch of specific spots. The Deverge guys created a map of the tables and we went over our seat assignments at the meeting point. We staged this in the late evening on a Sunday, so the crowd had thinned out a bit. That said, it still took us over an hour to get all of the seats we wanted. Fortunately we had delicious deli food to eat while we waited to begin. 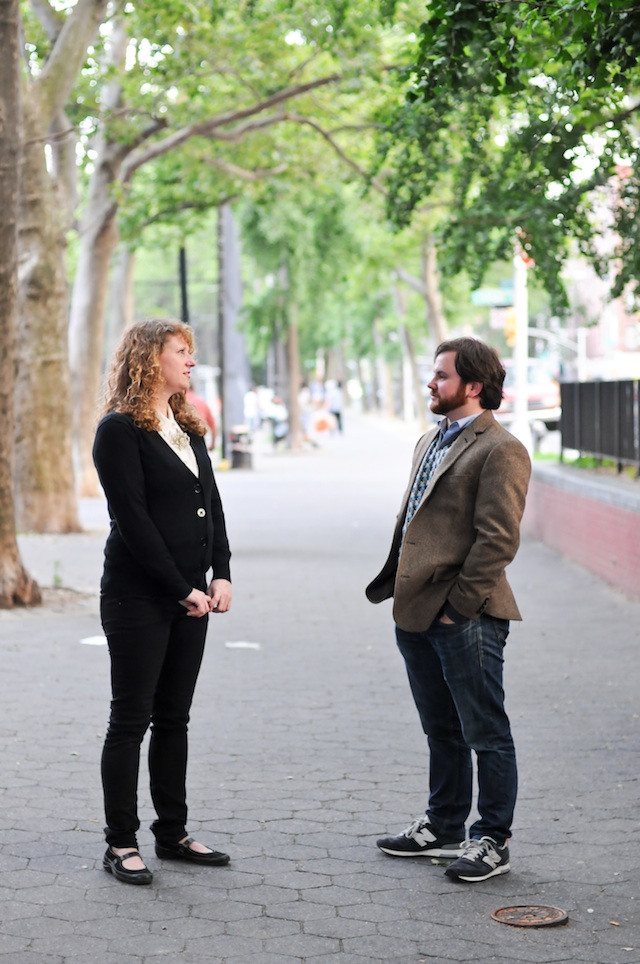 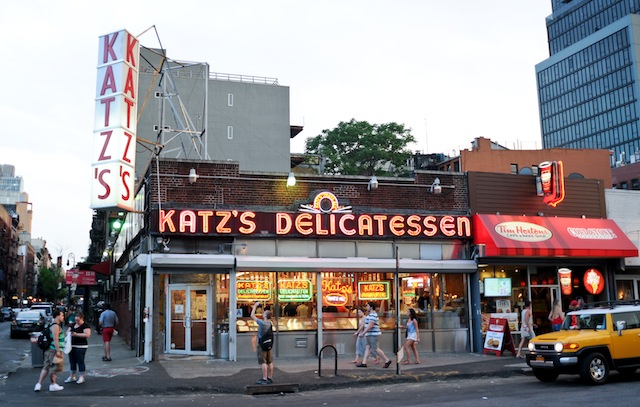 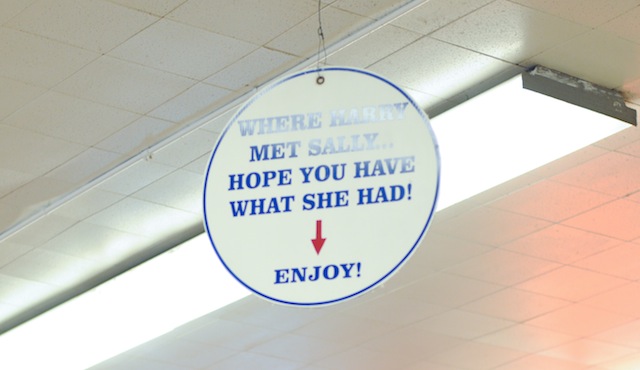 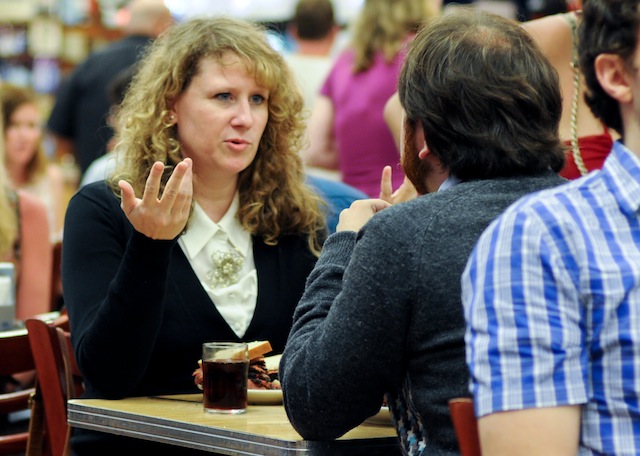 Agents Ashley Ward and Zach Linder did a great job as Sally and Harry. We dressed them up as close to the characters as possible, though Harry’s exact 80s sweater proved to be impossible to find. We came close! 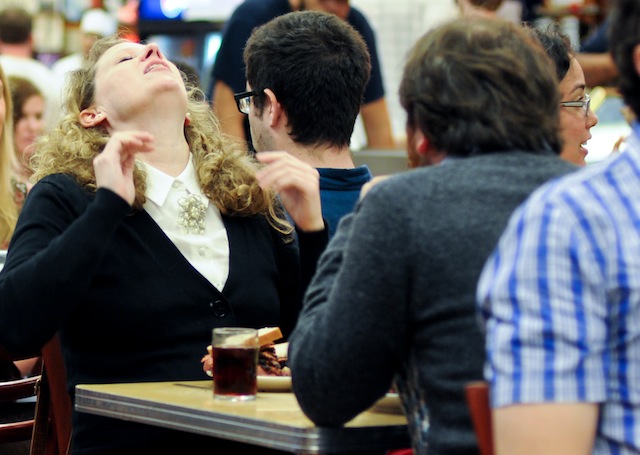 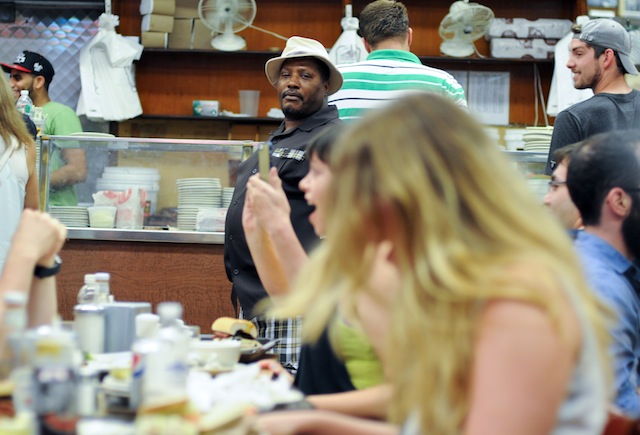 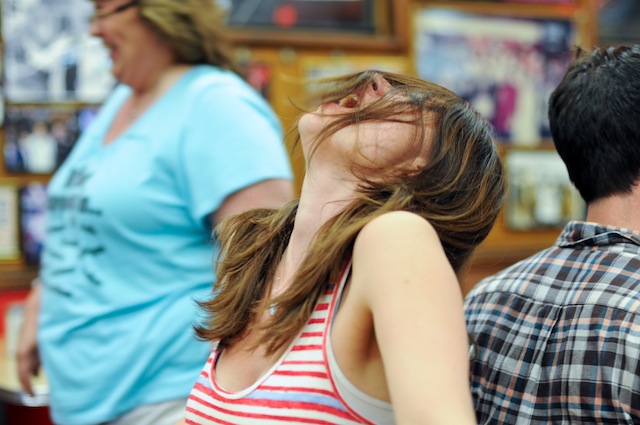 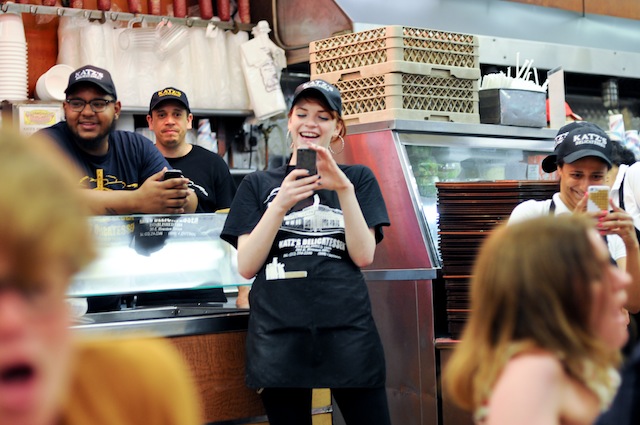 The staff starts to notice. They were all awesome. 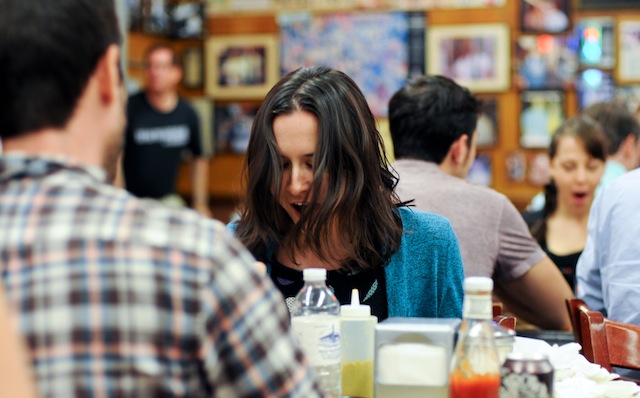 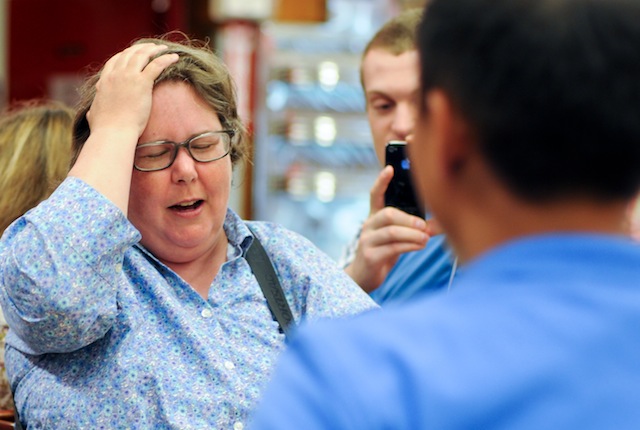 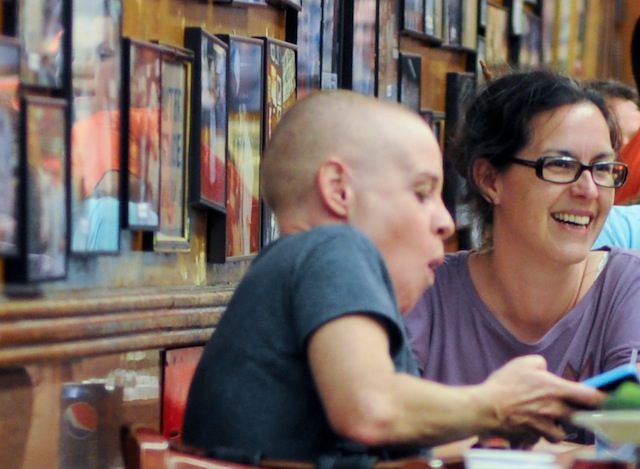 Other customers laughed and took photos as they found themselves in the middle of 20 screaming women. 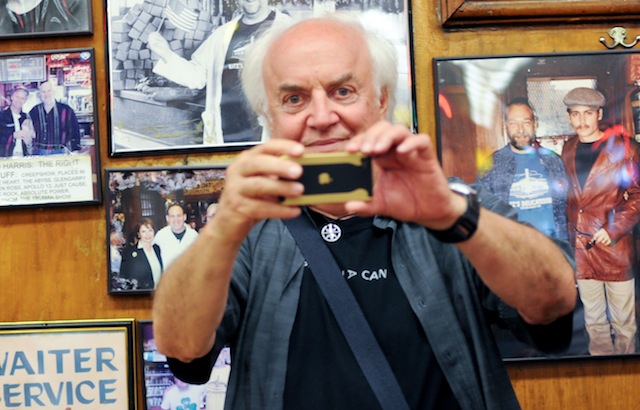 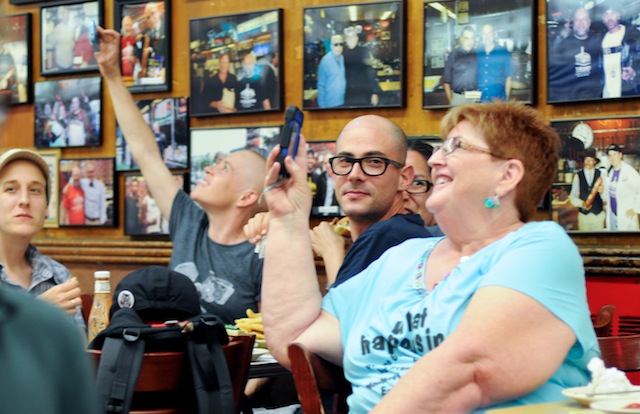 Although the men in the group had a much easier job, I have to say they had some great deadpan reactions that would make Billy Crystal proud. 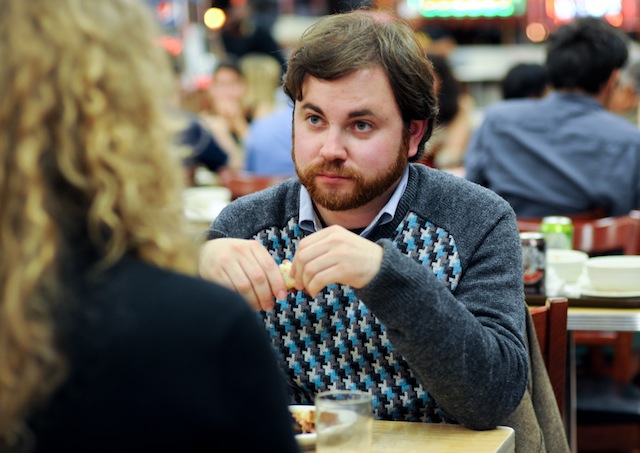 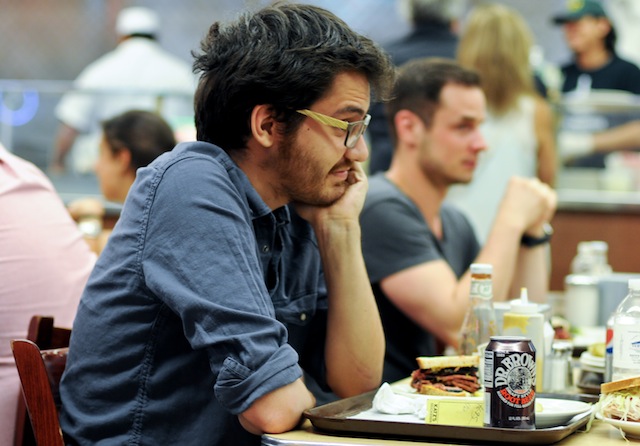 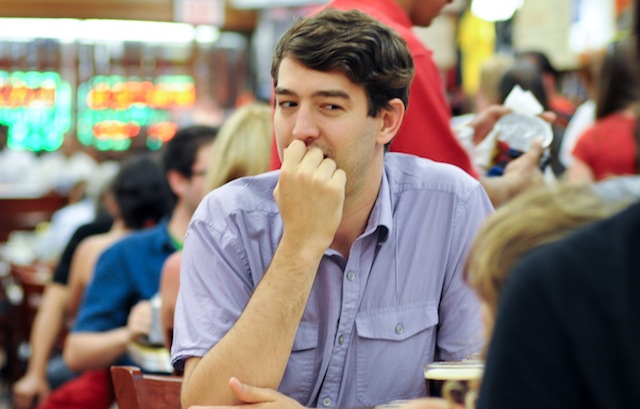 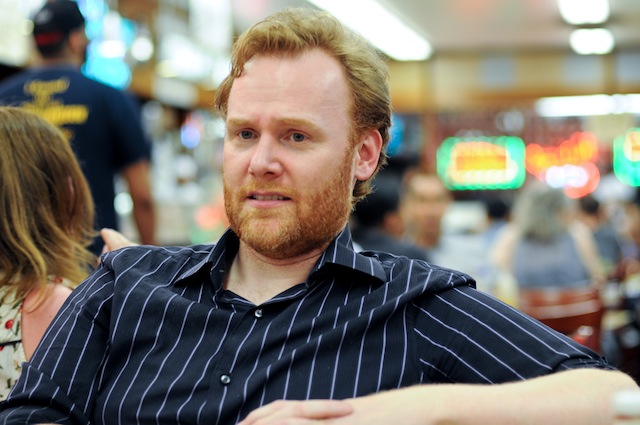 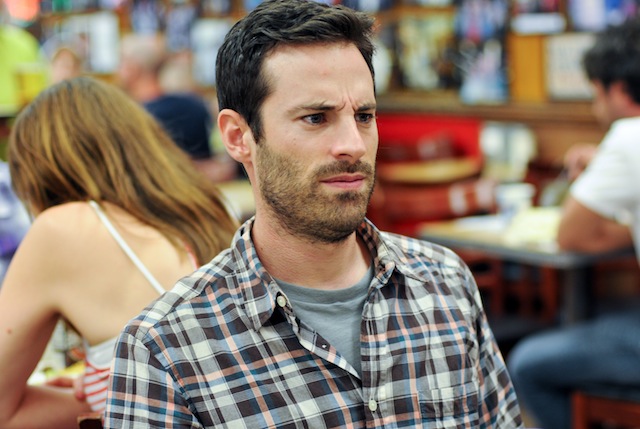 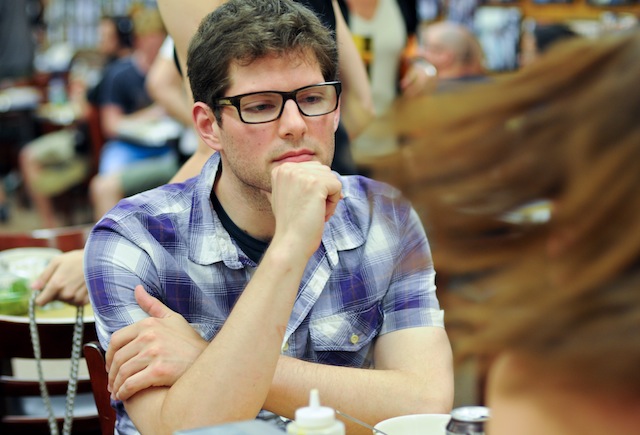 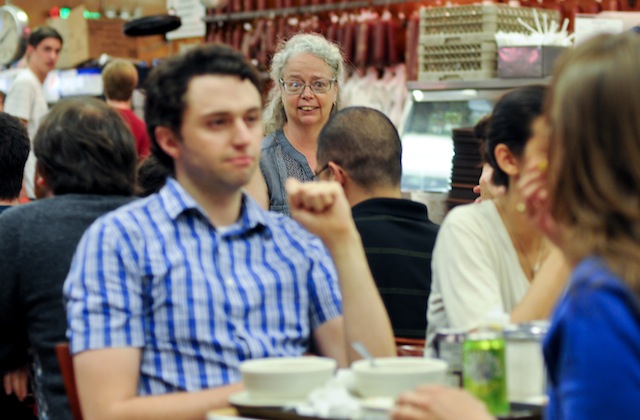 After the performance ended and the crowd applauded, Agent Bonnie John stood up and proclaimed, “I’ll have what they’re having.” Although this line in the film is very matter-of-fact, she had to shout the dialog to be heard. The noise was actually a huge challenge in this mission. Our performers had to be especially loud to draw attention in the noisy, busy restaurant. Although once things really got going, we certainly had everyone’s attention. We ended up doing the mission 3 times, with five minute breaks in between. We didn’t want to wear out our welcome, but the staff seemed to enjoy it more every time (and it only lasted about a minute each time.) 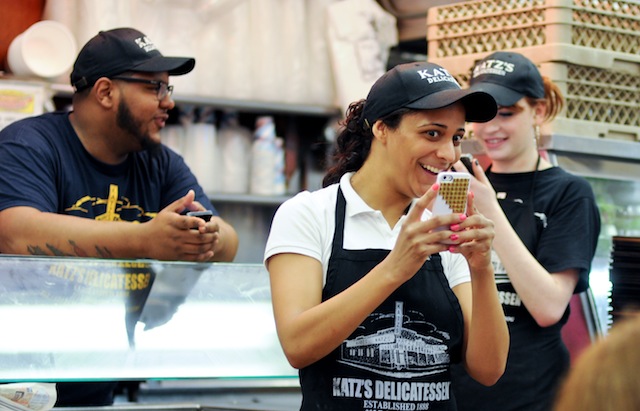 I had fun chatting with the staff after it was all over. They said they’ve seen people recreate the scene before one at a time, but agreed they had never seen anything close to this elaborate. We all had great dinners, and it seemed like everyone who was there had a good time.