For our latest mission we sent Neo from the Matrix into Macy’s in New York City to shop for a new “man dress.” As Neo talked to a confused sales associate in the mens suits department, over 30 “Agent Smith” clones suddenly appeared, pouring out of elevators and escalators surrounding the area. An entirely unauthorized slow motion battle ensued, similar to the famous fight scene in The Matrix Reloaded. It’s the Matrix sequel you’ve always wanted: Macy’s Reloaded.

Here’s some behind-the-scenes footage of our rehearsal: 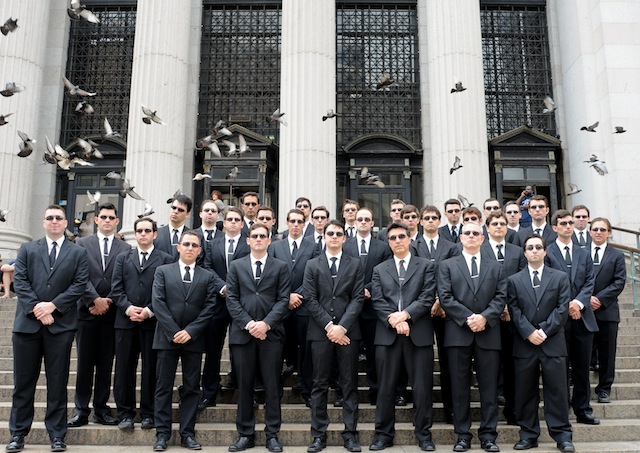 This was a difficult project to cast. Well, Neo was easy. We cast our friend and longtime Improv Everywhere participant Winston Noel, who had actually played Neo already in a CollegeHumor video. The Agent Smiths on the other hand, were tricky. While we know quite a few twins, we don’t know any clones. We sent out a casting notice on our mailing list looking for guys who resembled Agent Smith. Of the 30 who turned out, a few were a little tall or a little short or had a few too many grey hairs, but overall as a group they looked fantastic. 30 ended up being a really ideal number for the size of the store as well. I’m not sure if we would have had room for too many more. 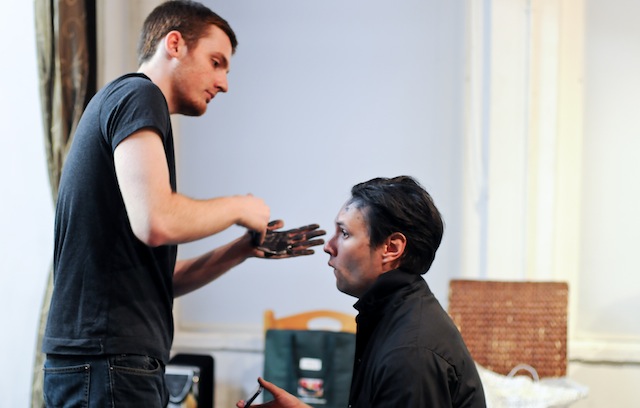 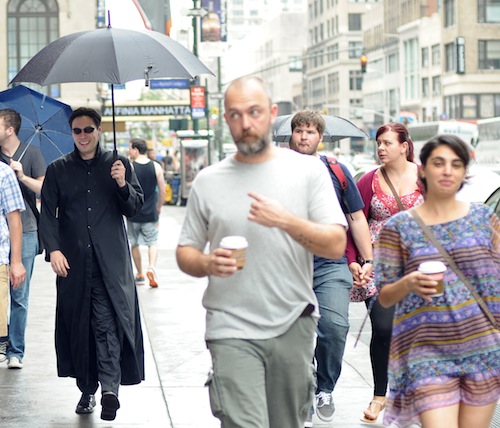 It was really fun walking down the street with Neo. The guy in the photo above couldn’t stop laughing at him. Others shouted things like, “Hey Neo! Take the red pill!” 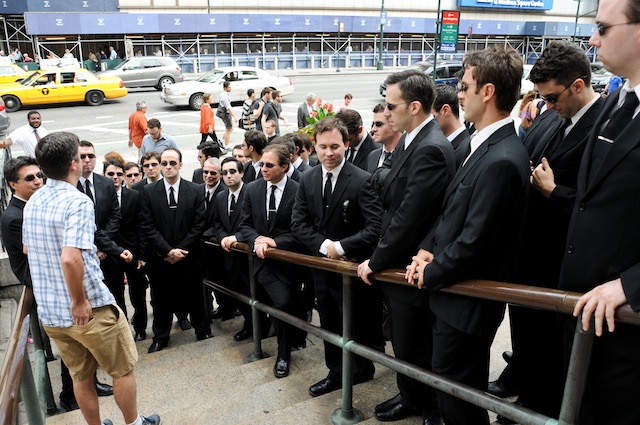 We met up with the Agent Smiths on the steps of the post office on 8th Avenue. I went over the gameplan with everyone, and we divided them into 3 teams. The mens suits department is on the 3rd floor of Macy’s, so we had one team start on the 3rd floor, one on the 2nd, and one on the 4th. This enabled them to take the escalators and elevators to the playing space, arriving in waves similar to the entrances in the film. We talked through the fight scene and did a very brief rehearsal, but decided it made the most sense to have the fight be improvised. 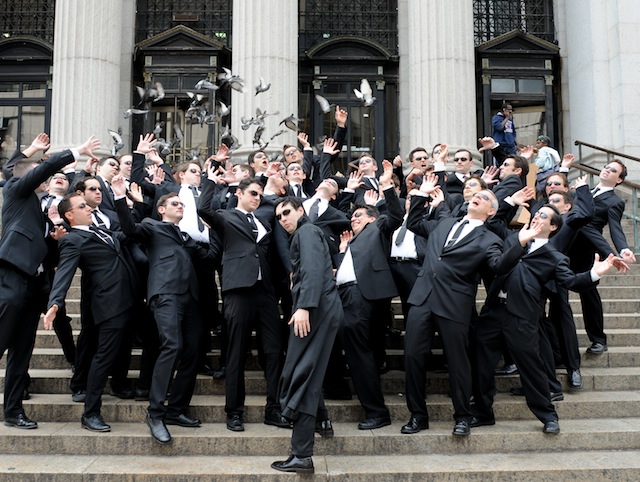 For some reason pigeons go crazy at the sight of Agent Smiths. 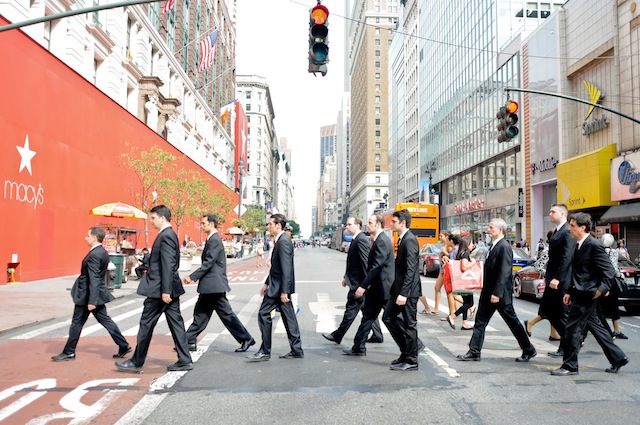 Agent Smiths Abbey Roading it on the way to Macy’s. 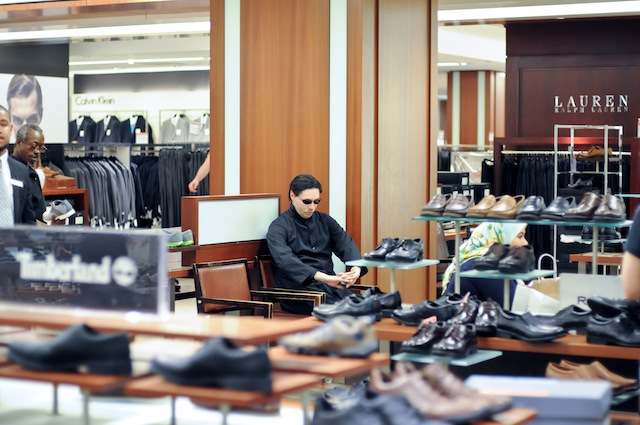 Neo waits in the shoe department as our hidden camera crew gets set up. 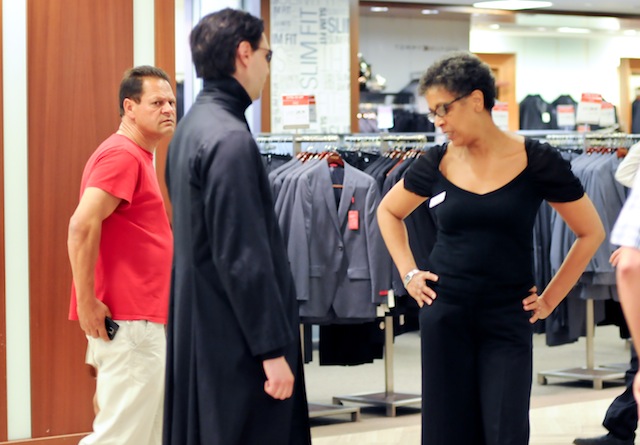 Neo walked around by himself through the store and interacted with several different sales associates. “I’m looking for a ‘man dress’ similar to what I have on, but more formal.” The employees took him seriously (though one did say, “I feel like I’m in the Matrix right now.”) but no one was able to offer much help. The woman pictured above said, “Maybe try Bloomingdale’s?” 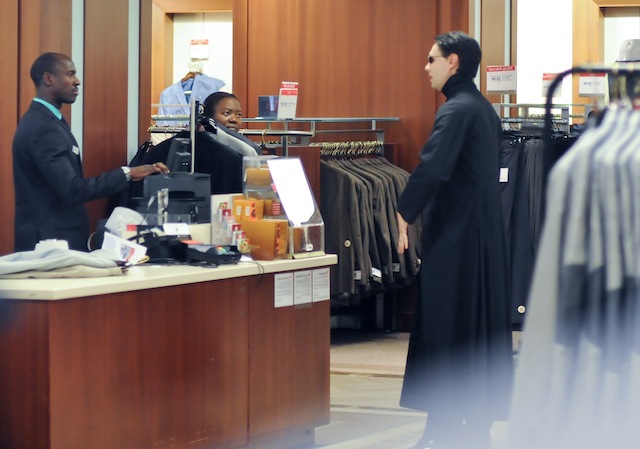 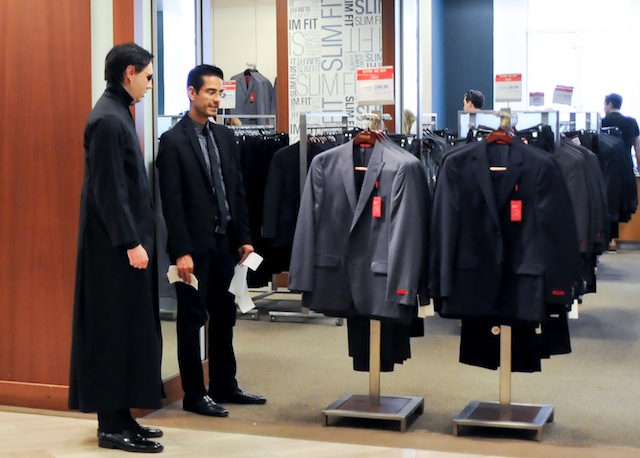 The final employee he chatted with was in the main area right in front of the escalators and a big open space that was just begging for a performance. 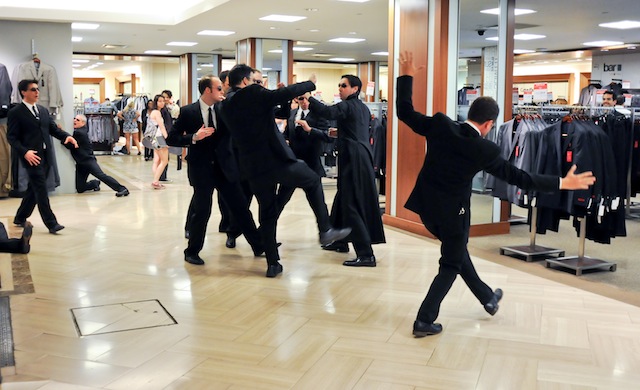 We cued the Agent Smiths and the slow motion fight began as the first wave showed up. We chose to do the whole scene in slow motion for two reasons. One, it’s a nice reference to the scene which has quite a bit of slow motion. Two, it was much safer and much less likely to alarm the employees. No one is calling the cops on a slow motion fight. 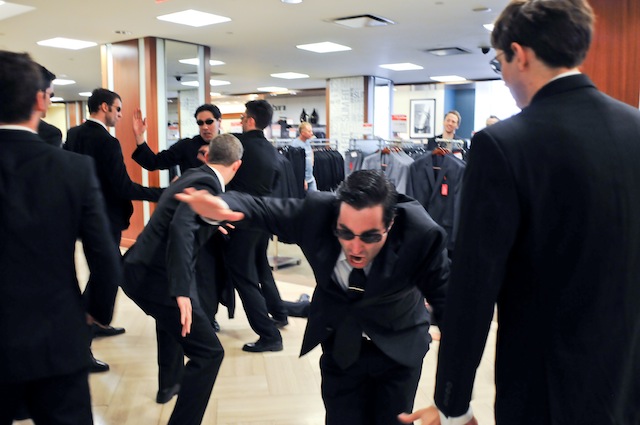 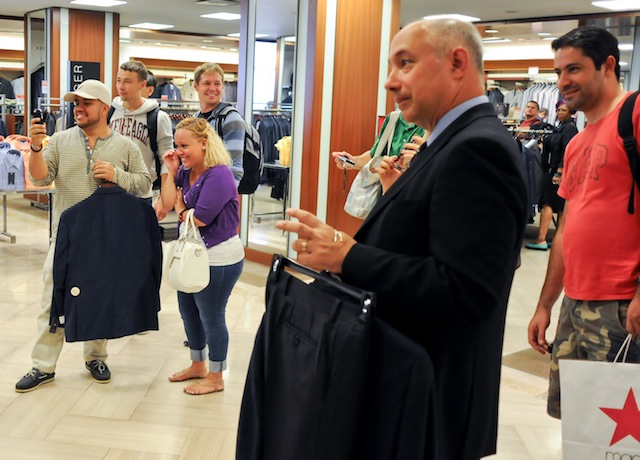 Customers and an employee reacting to the scene. 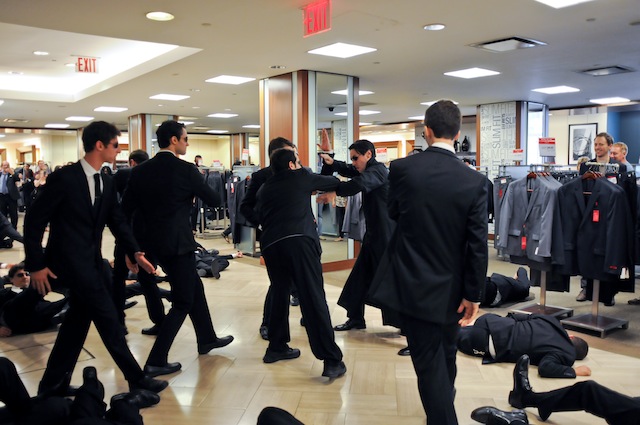 Wave two of Agent Smiths arrived from the escalator from the fourth floor. 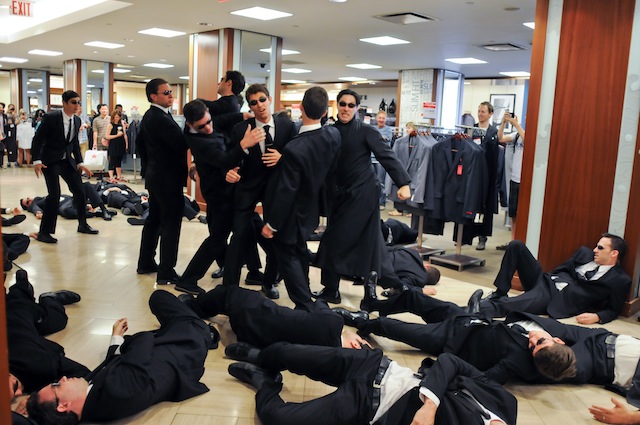 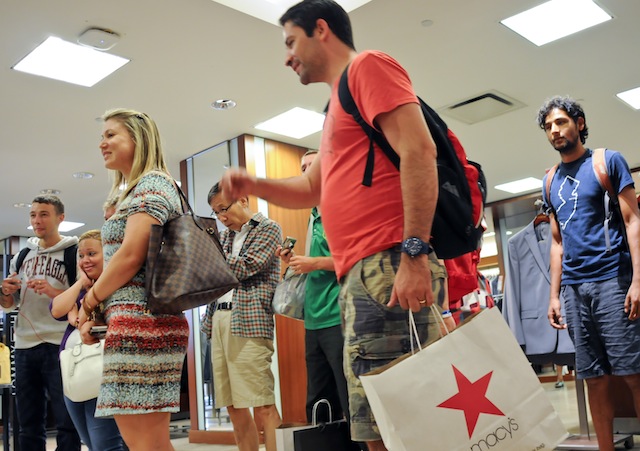 Crowds started to gather and watch the ridiculousness. 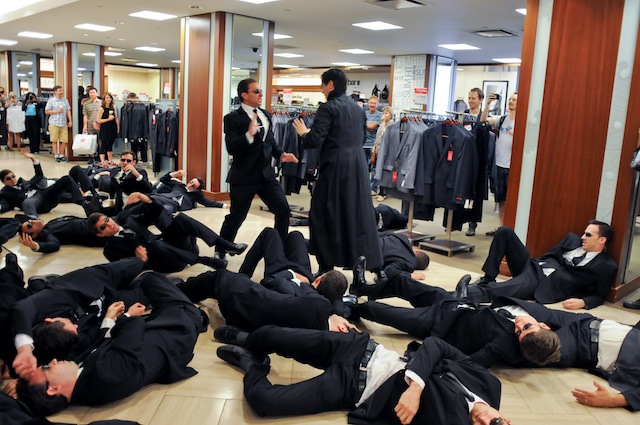 Wave three arrived and then it was finally down to just one Agent Smith standing. 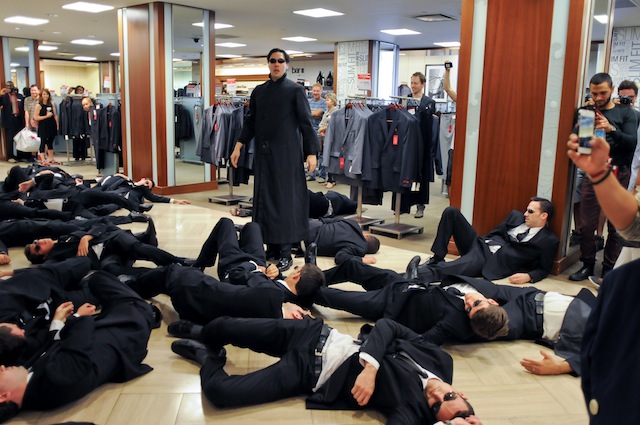 Neo surveys the wreckage and then announces that he’s going to go shop for a “man dress” down on the 2nd floor. He awkwardly makes his was to the escalator through the bodies. 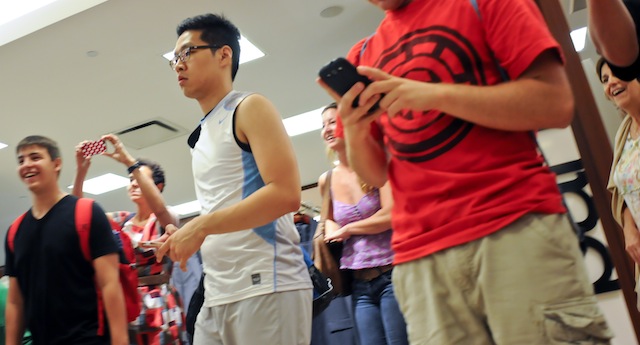 More people laughing and taking photos of the mob of men in suits on the ground. 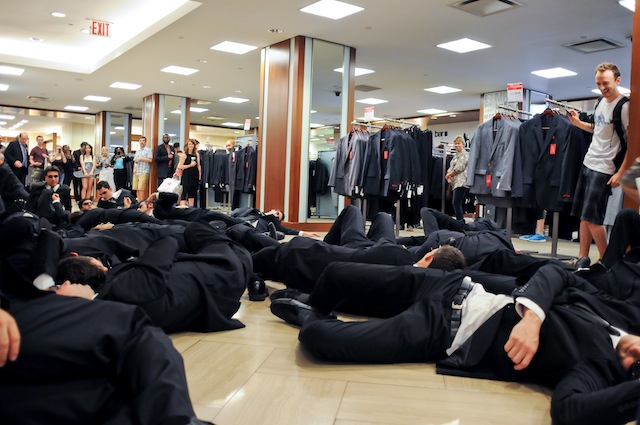 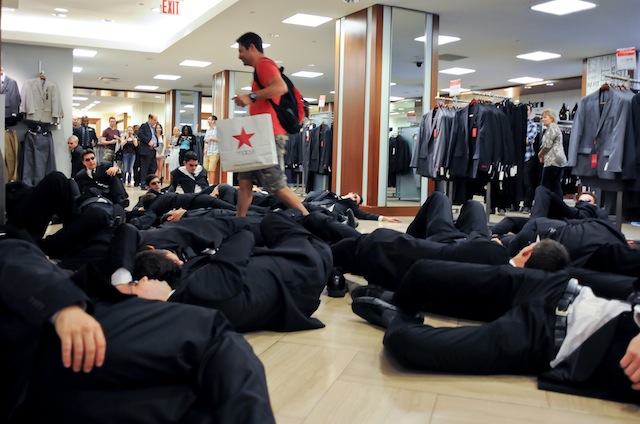 One customer walks through the bodies to get to the escalator. 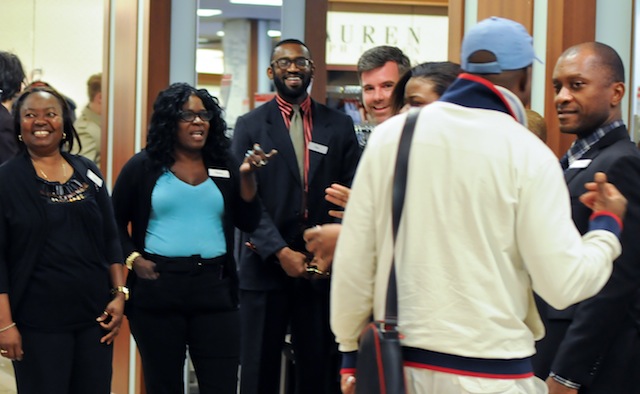 The Agent Smiths eventually got up simultaneously, cracked their necks, and exited the store. I stayed behind to chat with employees, all of whom seemed to have really enjoyed the spectacle. Many of the associates who had talked with Neo about the “man dress” ended up being present for the fight as well. It was fun to hear the story from their perspective. There were rumors of managers and security guards figuring out how to deal with the situation, but we were in and out so fast that nothing came of it. I also think it became clear very quickly that we were both harmless and ridiculous.