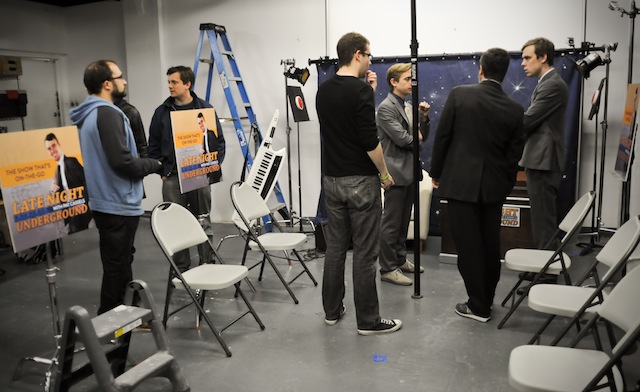 We’ve done dozens of ridiculous projects on the subway over the years. We’ve staged a scene from Star Wars, brought 50 redheads onto the same car, put 15 pairs of identical twins across from each other, set up three beds for people to sleep on their way home, thrown birthday parties and marriage proposals, given out dollar bills, and played BINGO, just to name a few off the top of my head. The subway continues to be our favorite stage in New York City. I was excited to take our subway missions to the next level with the project, which I think was the biggest transformation we’ve ever done in terms of the amount of set pieces and props used. 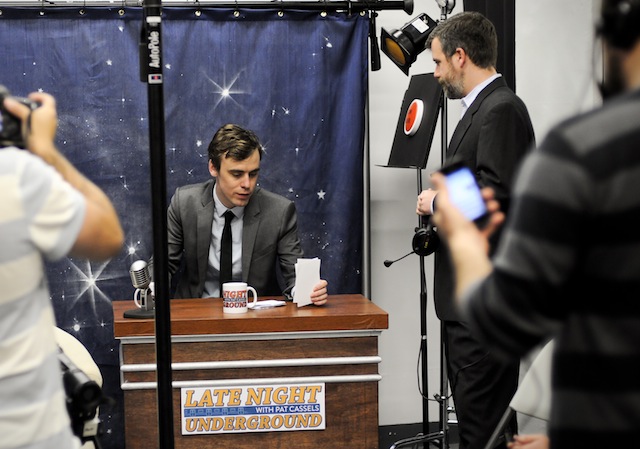 We met at the Deverge production office where the team set up a to scale subway car set with chairs and polls. We ran through the show a few times, making sure everyone knew what props and set pieces they were in charge of setting up. We wanted to set up the show as quickly as possible. Agents Pat Cassels and Evan Gregory also had a chance to rehearse their lines. 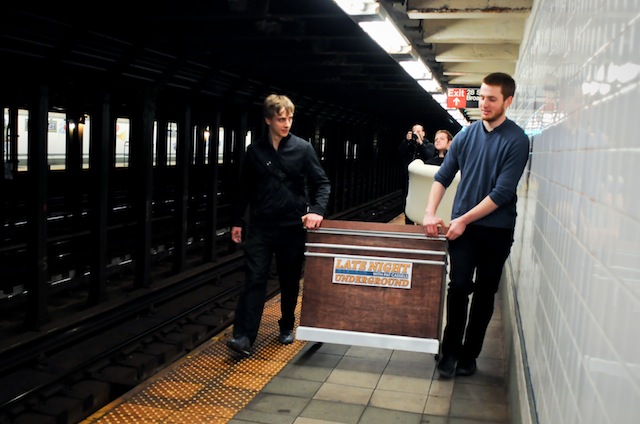 We carried everything over to the N train on 28th street and waited on the platform for the last car on the train. We staged this at 9 PM on a Sunday night when knew the trains would be mostly empty. At times it was too empty, but this project wouldn’t work on a crowded train. Our set would be way too annoying. Late at night on a Sunday it would be a welcome diversion. 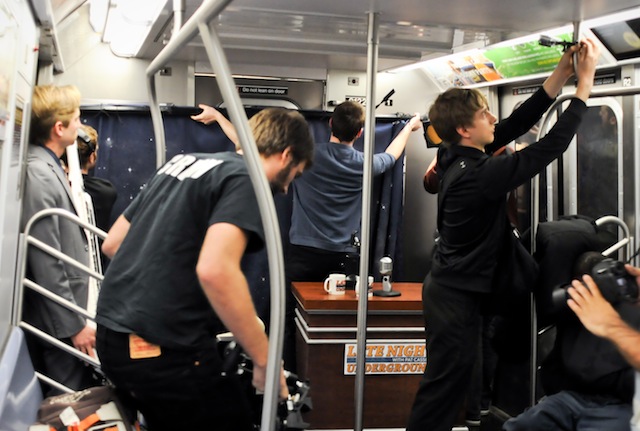 Agent Ilya Smelansky custom-built the talk show desk with the exact measurements of the N train in mind. He knew down the the inch what would fit on the train. We bought a white IKEA chair off of Craigslist for our guests, and custom created the backdrop with some fabric and paint. When the doors opened our team sprung into action putting everything in place: lights, gopro cameras, coffee mugs with the show logo, and a big talk show microphone. The train was pretty empty, but those that were there got on board pretty quickly with the idea as I invited them in with my producer character. 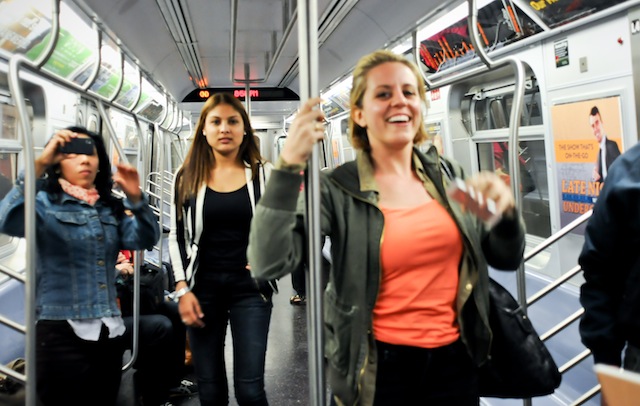 People reacting as we set up. 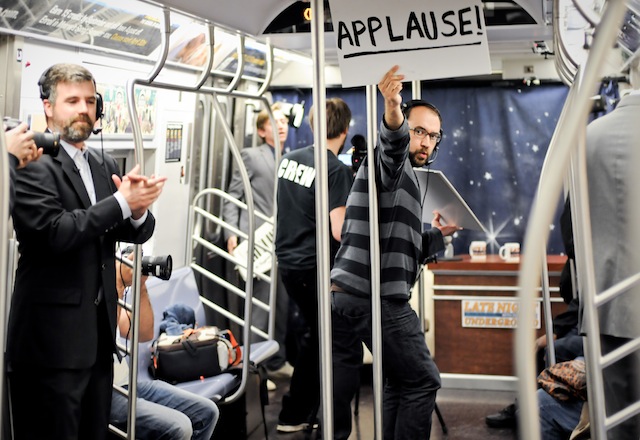 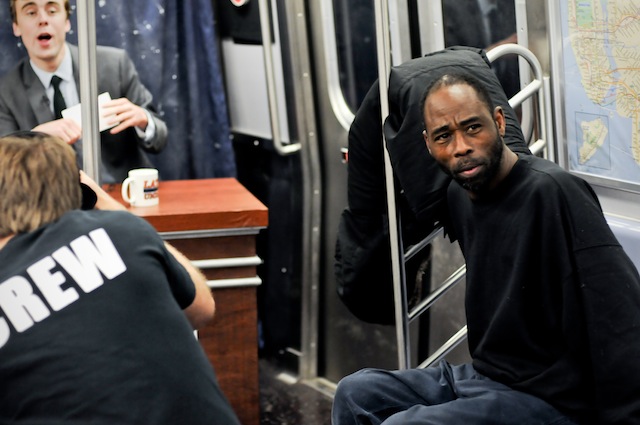 When we first got on the train, the guy pictured above was asleep right next to where we were setting up. He was using his jacket as a pillow and was completely passed out. We set up the entire set around him, and then when the music started he woke up. The look on his face when he realized a talk show set had magically materialized around him as he slept was priceless. He immediately wanted to be a guest on the show, but then later got cold feet about it. 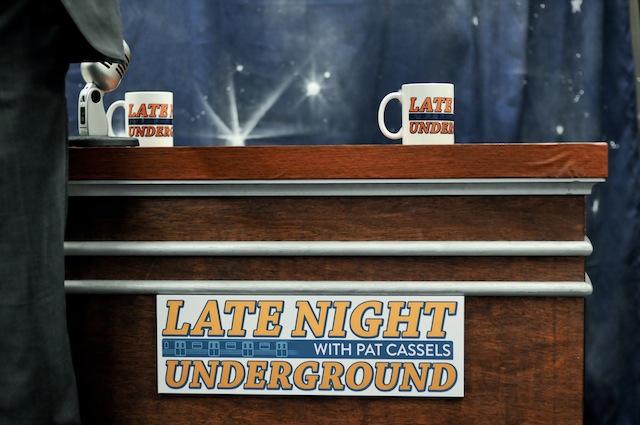 The desk and mugs. 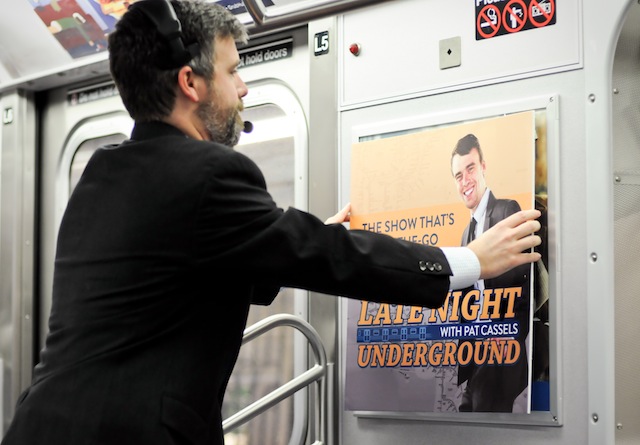 We covered all of the ads in the subway car with ads for our show. 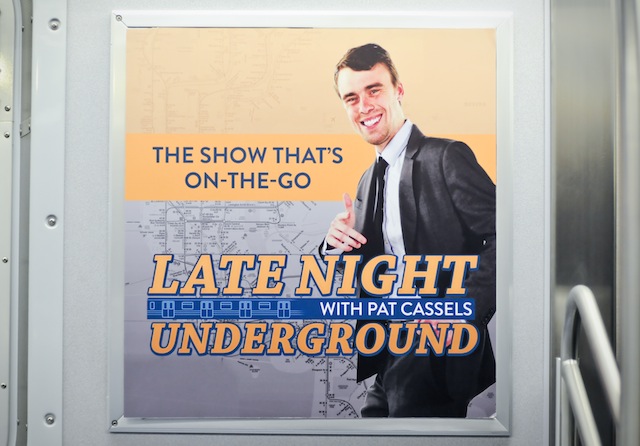 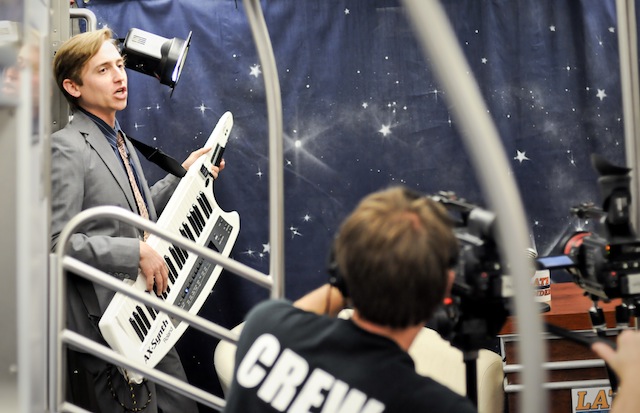 Bandleader Evan Gregory and the Downtown Sound starts the show. 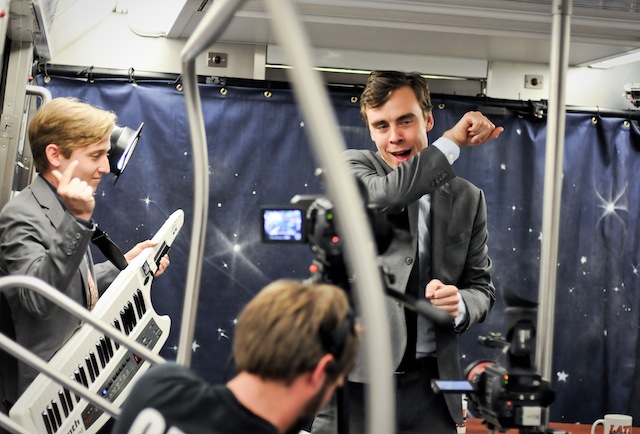 Your host, Pat Caaaaaaaassels! Agent Cassels exited the car in the middle and ran down the platform to the last door to make his entrance. He started the show with 4 monologue jokes, all of which were about the subway. Agent Benzine held up cue cards with the jokes on them. 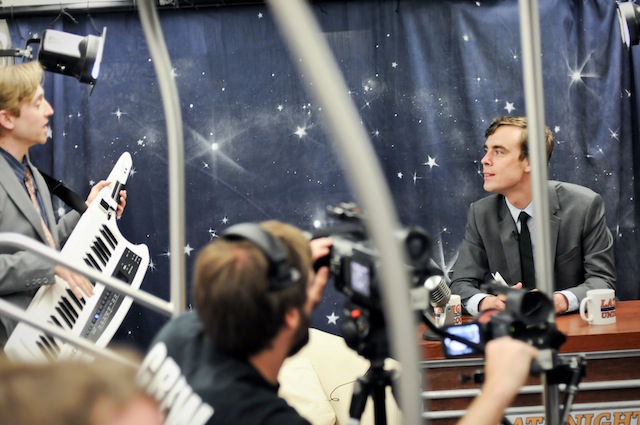 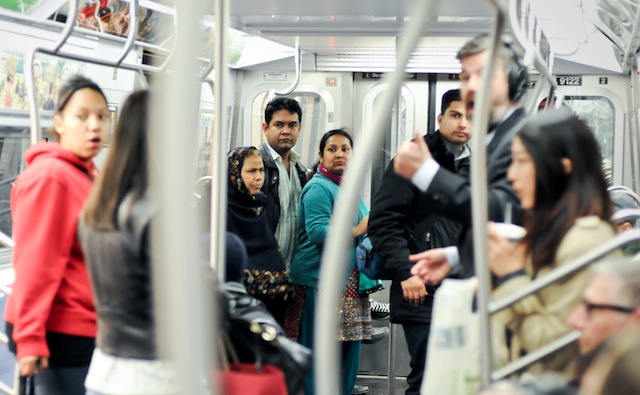 At each new stop, more people would get on the train, and I would welcome them to the show and let them know there were seats available. 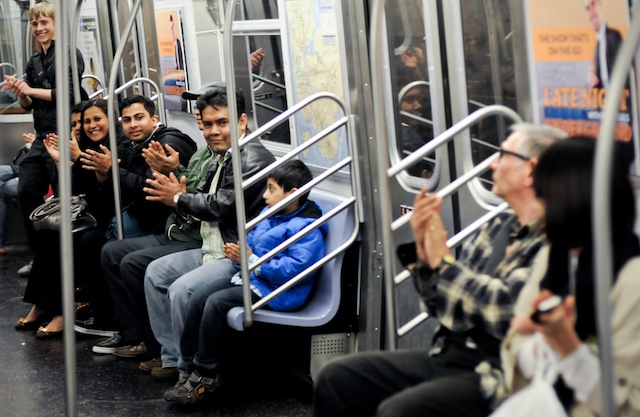 Even the people who sat on the far side of the car still helped out by clapping when the applause sign was up. 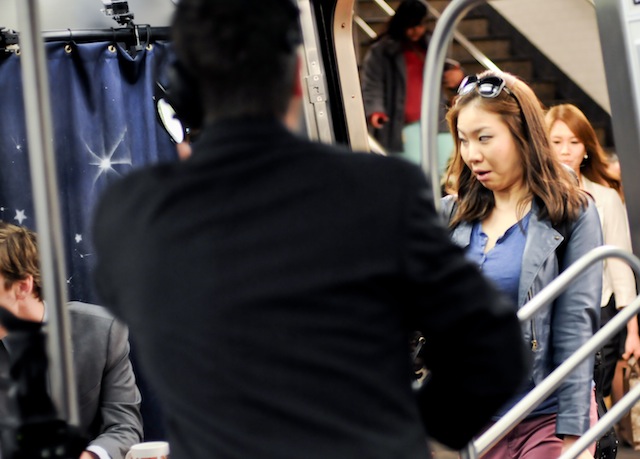 I loved this woman’s reaction. It was at Times Square and there were stairs right by our car. So people were running down the stairs trying to make it onto the train and our door was the closet one. They didn’t have an opportunity to see what was going on until they were already inside. 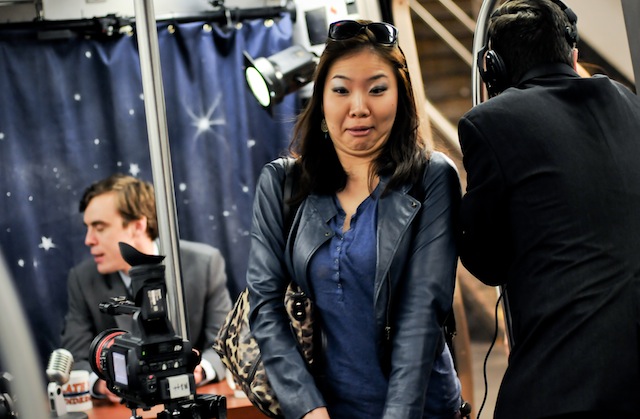 Although she was surprised when she walked in, she ended up enjoying the show. 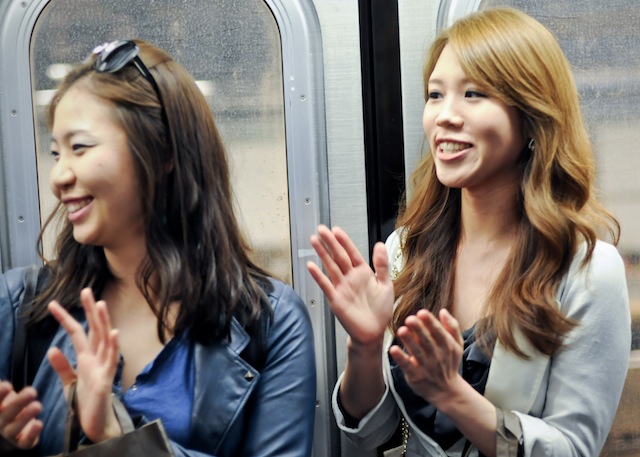 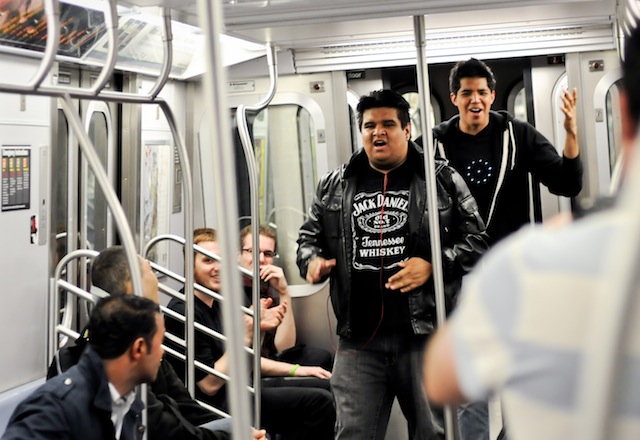 These guys saw us from the adjacent car through the windows and decided to switch cars. As soon as I saw them coming through the doors, I shouted, “You guys are the next guest on the show!” They got really excited and we interviewed both of them right away. 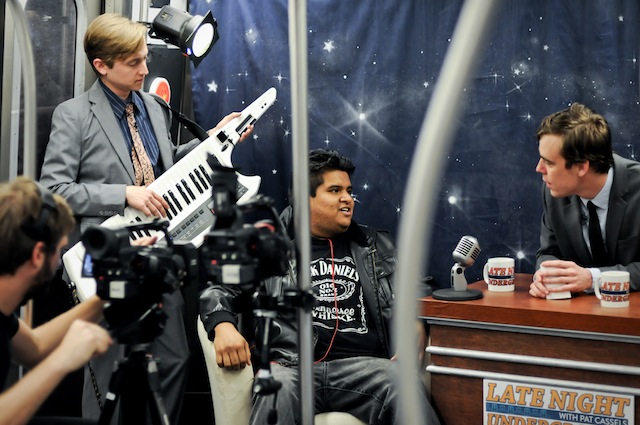 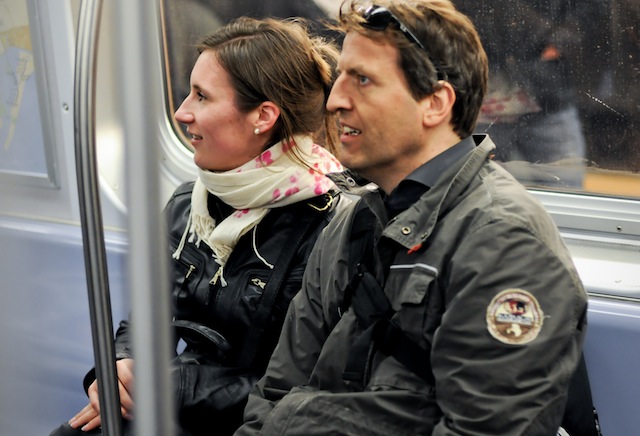 This was a German couple from Hamburg, visiting New York on vacation. They got on at Times Square and ended up staying on the train for a half hour. At first, they weren’t interested in being guests, but after watching several others, the guy eventually agreed to do it. He was great! 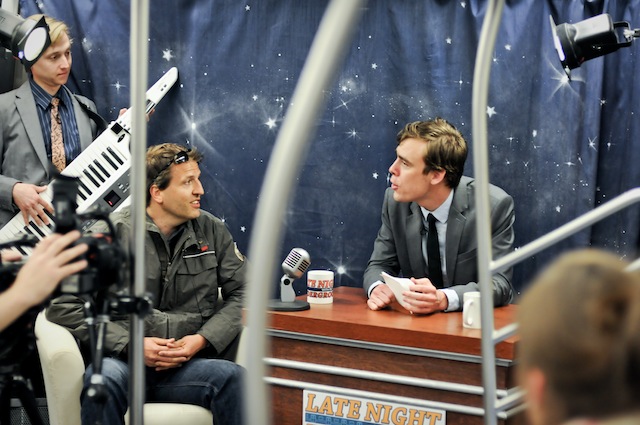 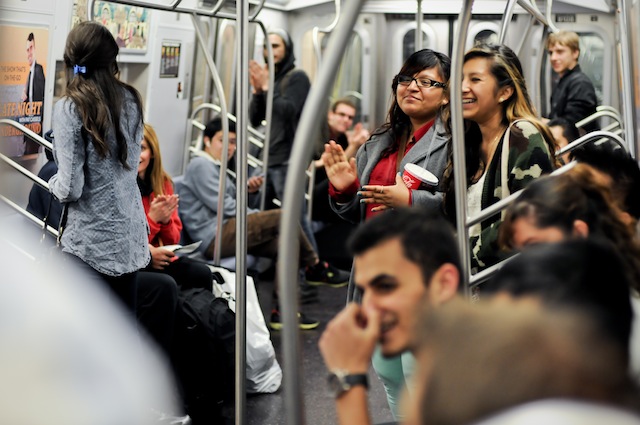 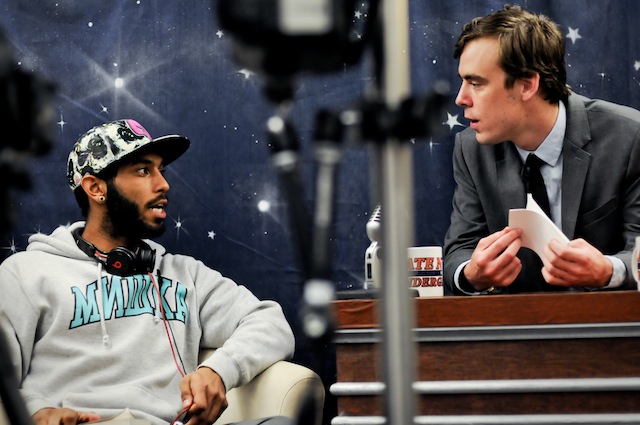 I went back and forth on how to stage this, thinking it might be fun to have actors or even real celebrities as the guests on the show. Ultimately I decided it was way more fun to interview random New Yorkers on the train. This was a talk show on the train, for the train. 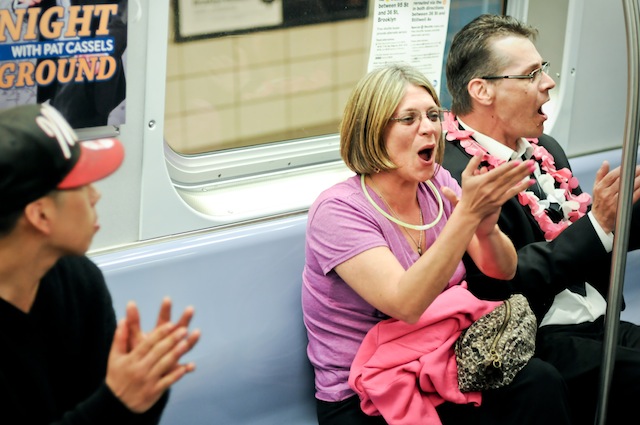 Towards the end of the night a couple got on the train who had just come from a party. They were in great spirits and immediately got on board. The woman gave a great interview. 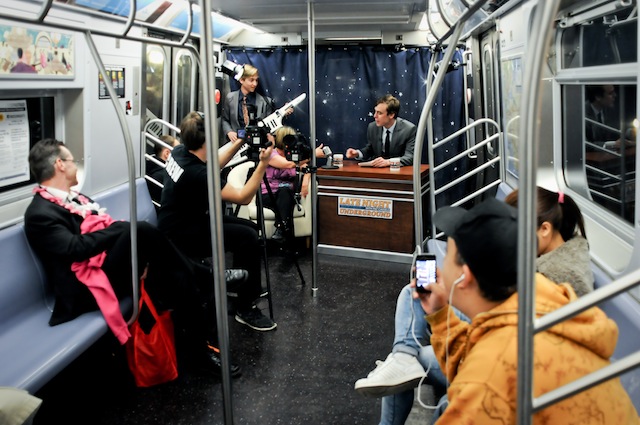 All in all it was a great night on the train. At one point we experienced a train delay of about 10 minutes. Usually train delays are the absolute worst. Everyone on the train starts rolling their eyes and complaining to themselves. But during this delay, the show kept on going, and everyone had a super fun distraction. It was definitely the most fun I’ve ever had on a stalled train.

Our No Pants Subway Ride series!

Listen to the full Theme to Late Night Underground, written by Tyler Walker: