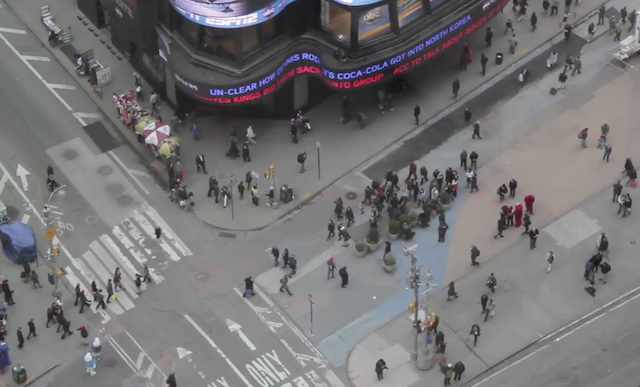 If you haven’t figured it out by now, the Reverse Times Square mission was our annual April Fool’s hoax. We did not actually get 2,000 people to go backwards in Times Square. While a cool idea in theory, we’re pretty sure it would be dangerous to ask thousands of people to walk backwards through an area filled with cars… not to mention how rude it would be to other pedestrians on the sidewalks we’d bump into.

The video was shot and edited by Cameron Sun, who also shot our Quadruplets hoax last year. Almost the entire video is reversed footage, often composited together with normal footage. One shot, for example, contains cars going forward in the foreground, while random New Yorkers are going backwards in reversed footage in the background.

About twenty Improv Everywhere agents helped us shoot the video, providing some of the reaction shots and some of the more unrealistic moments. We staged shots with just a few of the Improv Everywhere performers were walking backwards while reacting, and the reversed the footage to make it seem like everyone else was going backwards as they walked forwards. We intended the absurd moments at the end to let everyone in on the joke, but dozens of folks seemed to fall for it anyway (surely they started commenting or tweeting before reaching the end!)

As a group that puts on pranks year-round, it doesn’t make sense for us to release a normal video on April Fool’s Day. We use the day as an opportunity to play a prank on our YouTube Subscribers.

A huge thanks to Cameron Sun for shooting and editing this project. Check out his YouTube channel to see his special effects driven comedy videos.