For our latest mission, we had 100 people camp out in front of a 99 cent store in Manhattan on Black Friday. Participants arrived early in the morning with tents, chairs, and sleeping bags, making it look like they had camped out overnight. When the store opened, the crowd rushed inside and made purchases, buying 99 cent items with glee. Actress Cody Lindquist posed as a local NBC news reporter and conducted interviews with confused and delighted store employees and passersby.

Watch the video first, and then check out the photos and report below. 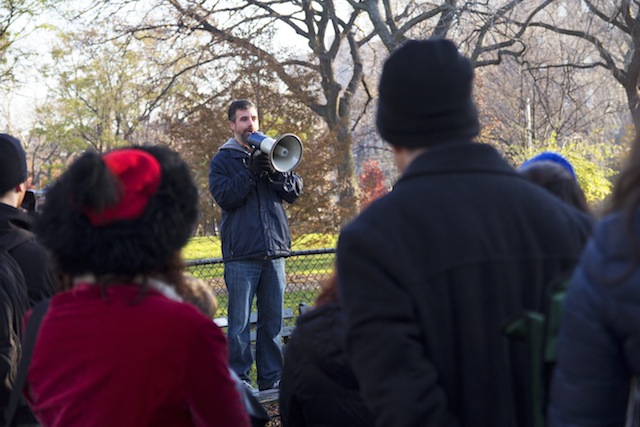 Going over the plan at the meeting point.

About 100 intrepid Improv Everywhere agents woke up at the crack of dawn to participate. After getting organized we headed over to the store at 8:30 AM, setting up a half hour before they opened. Some participants set up tents at the front of the line. We wanted to make it look like we had been there for hours and hours when the employees arrived. 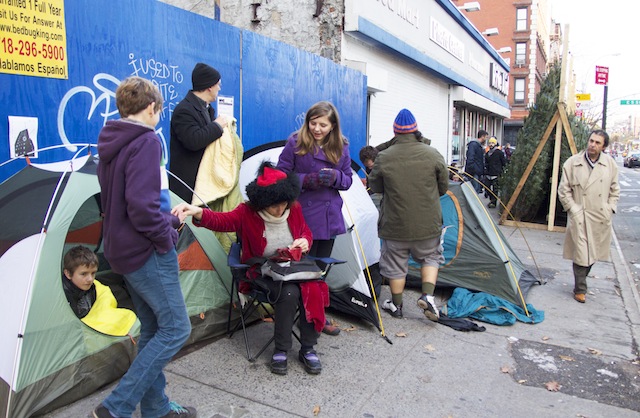 About 100 intrepid Improv Everywhere agents woke up at the crack of dawn to participate. After getting organized we headed over to the store at 8:30 AM, setting up a half hour before they opened. Some participants set up tents at the front of the line. We wanted to make it look like we had been there for hours and hours when the employees arrived. 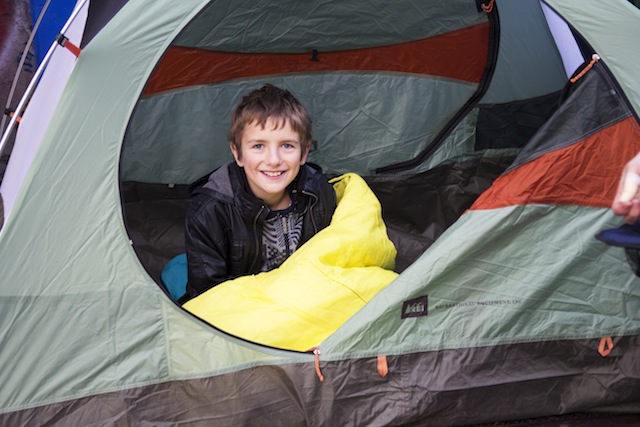 The first in line. 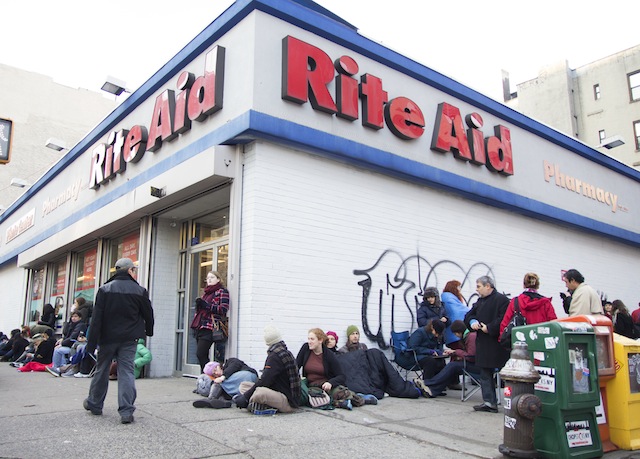 The dollar store was on 1st Avenue and 5th Street, right next to a Rite Aid. Our line stretched around the block, covering the whole length of the Rite Aid and then some. 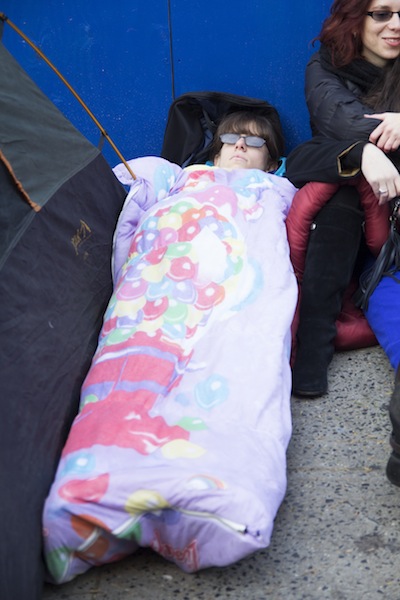 Sound asleep in his chair. 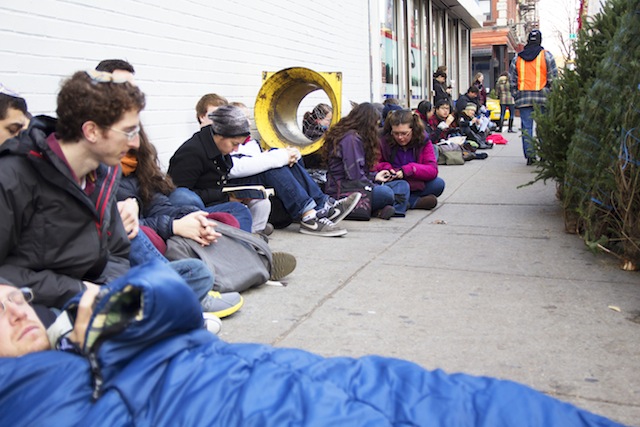 Agents Zach Linder and Hal Philips served as security, making sure the line stayed orderly as it assembled. 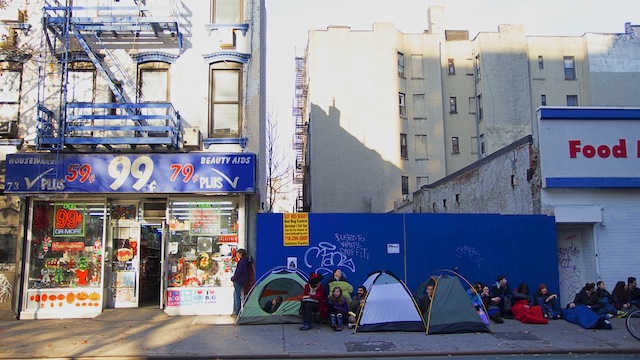 The store, right at opening. 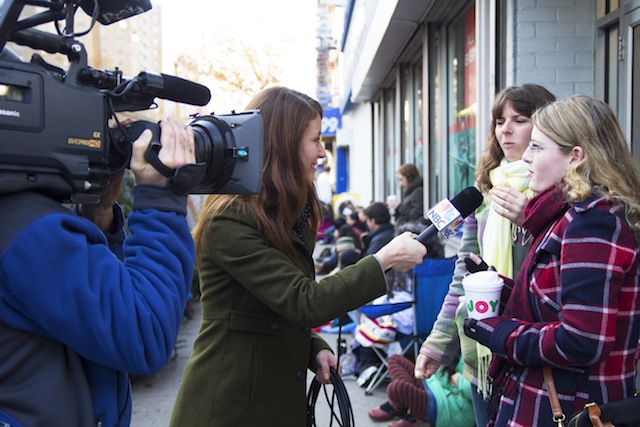 Agent Cody Lindquist posed as a reporter from local NBC news. Dan Gold filmed her with a professional news camera, adding to the believability. We re-used the NBC Sports microphone box from the Best Game Ever, putting a traditional NBC logo over it. 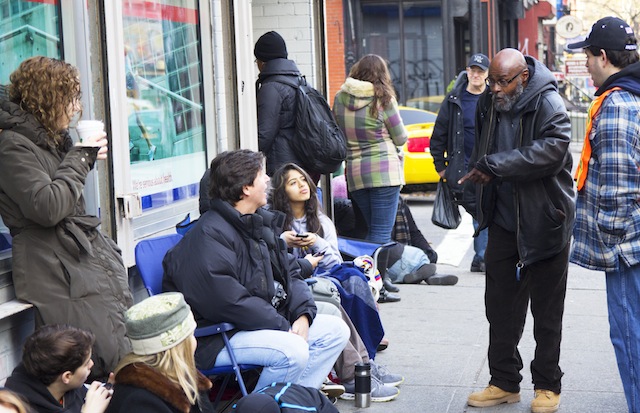 This guy went nuts after seeing the line. 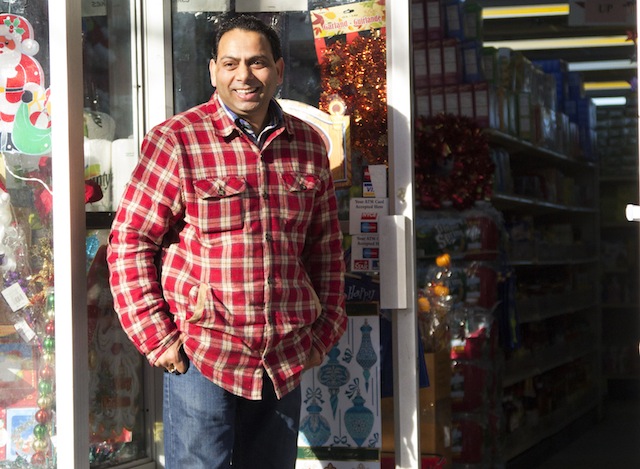 The store’s head employee arrived a little before 9:00 and unlocked the door. He checked out the line, but as he later told Agent Lindquist, he was convinced the line was for Rite Aid. 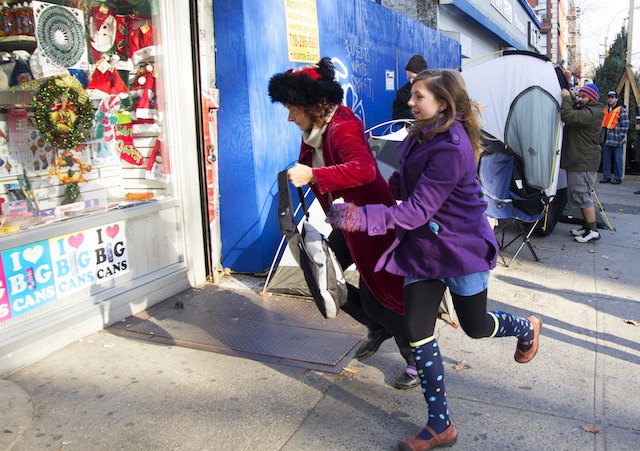 Eventually Agent Keith Haskel went in the store to let the guy know that the line outside was waiting on his permission to enter the store, as it wasn’t quite 9:00 yet. Bewildered, he came out and let everyone know he was open. The mad dash began! 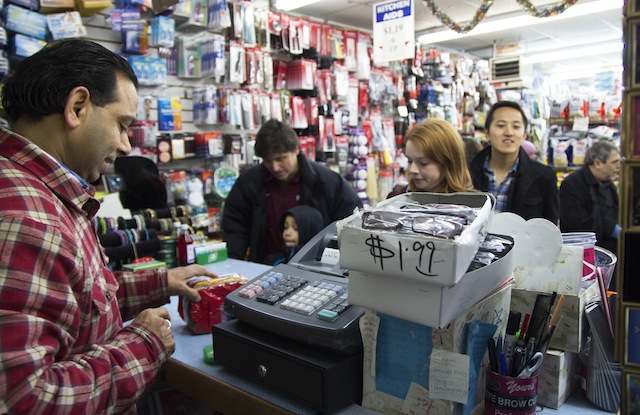 Smiling and ringing up a customer as a line forms. 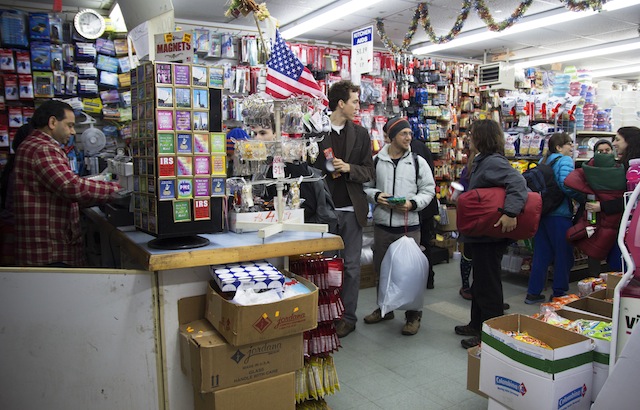 In order to keep the very tiny store from getting too crowded, Agent Linder started managing the line and only letting in a certain number of people at a time. There was another actual employee who was working by the front door, and after Linder asked his permission to send in five more people a couple of times, the guy started treating him as if he was an actual employee. It was awesome. 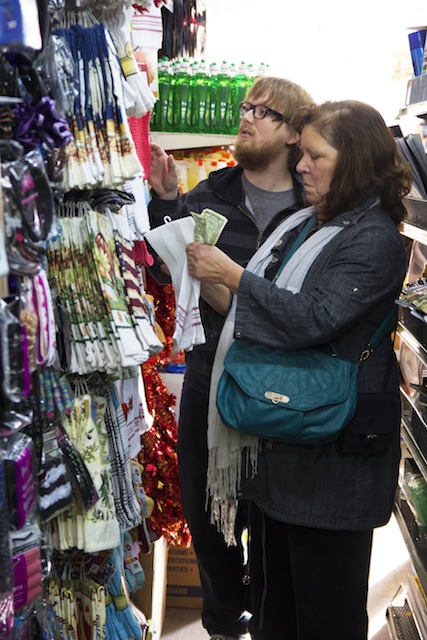 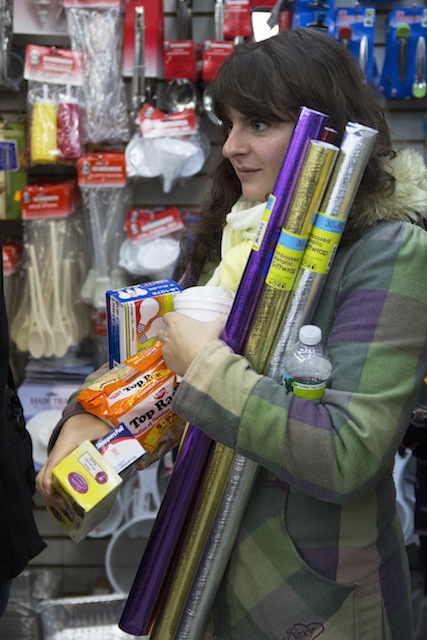 Some people grabbed more than others. 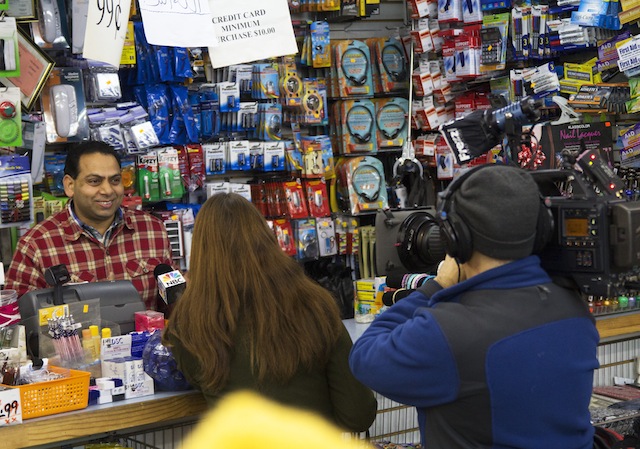 After the last customer had checked out, Agent Lindquist entered the store and interviewed the main employee. He was really excited about the whole thing and definitely appreciated the business, even if it didn’t make total sense to him why it had happened. The news crew left, and we all disappeared as the store returned to business as usual.

It’s a great dollar store, and everyone who worked there was super friendly. Go check it out if you are in the East Village and in need of some deals– 1st Avenue between 4th and 5th! 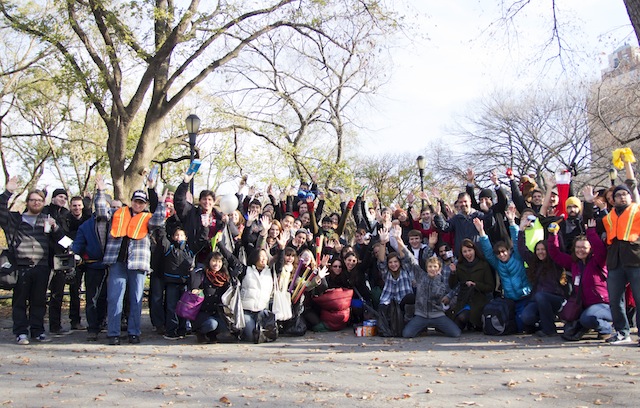 Most of the participants headed back to the meeting point after the mission. We collected any unwanted food or cleaning supply items that were purchased and dropped them off at a nearby charity organization.

All four of our DVDs are back in print! Pick them up for the comedy fan on your list!