For our latest mission, a group of 24 actors between the ages of 48 and 78 staged an unauthorized boardroom meeting in the office chair department of a Staples. The chairs in this particular office supply store were already arranged in a boardroom configuration, making it easy for us to hold a surprise meeting. Actor Will Hines gave a presentation to the board, using a whiteboard and an easel he had bought from the store just minutes prior. Minutes into the meeting, the board was asked to leave by a confused store manager.

Watch the video first, and then check out the photos and report below. 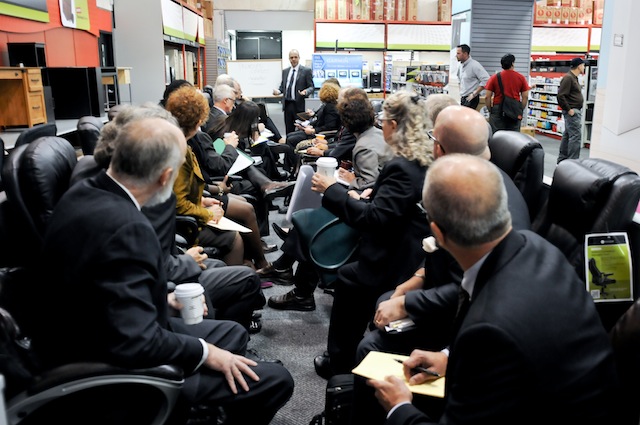 About a year ago I got an email from a guy named Jesse Stroud suggesting that Improv Everywhere turn a Staples into a real office, filling the desks on display with people working. I thought it was a great idea, but after doing a little research I found out that none of the Staples in Manhattan have office desks on the showroom floor. When I checked out the Staples on 6th Avenue and 40th Street, I discovered they had a huge selection of office chairs, and the way they were arranged made it look like a boardroom with an invisible table. 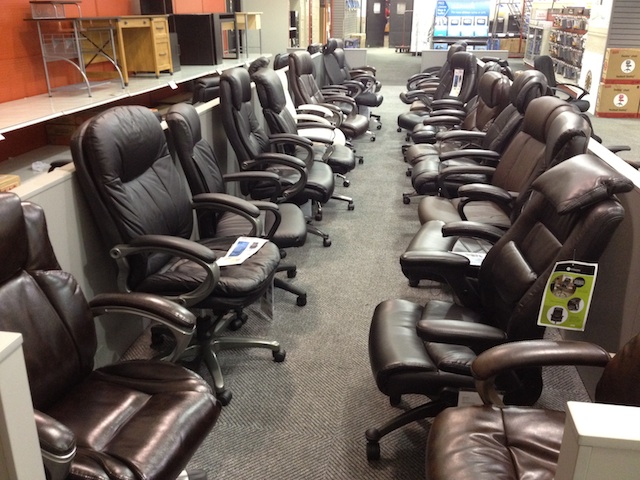 I counted 24 chairs in the “boardroom” and figured it would look hilarious to have an unauthorized serious meeting in this spot. The boardroom is a place typically used by the most powerful members of a corporation, so I wanted to cast this project with older, more distinguished looking participants. I sent out an email request for volunteers over 50 years old, and I cast 24 people from the responses that came in. The board members ranged from 48 to 78, with the average age being about 55. 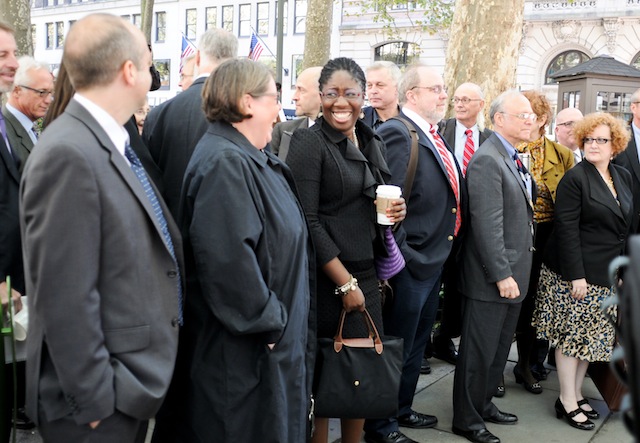 Participants at the briefing point. 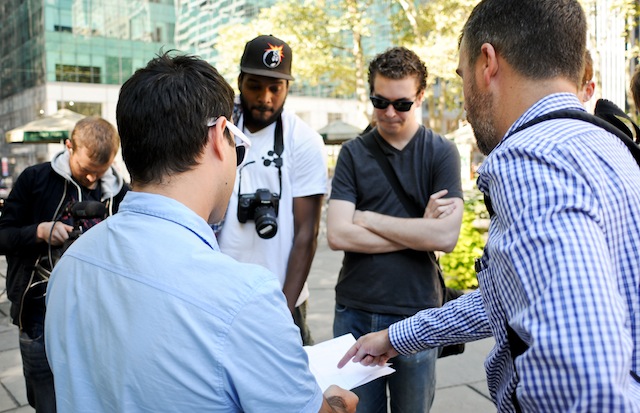 We scouted the Staples a few times figuring out where we could hide GoPro cameras in the store and where our crew could discreetly film. It is always extremely difficult to get away with filming in a retail store, so we had a larger than usual crew, figuring we would need people to come off the bench as others got ejected. 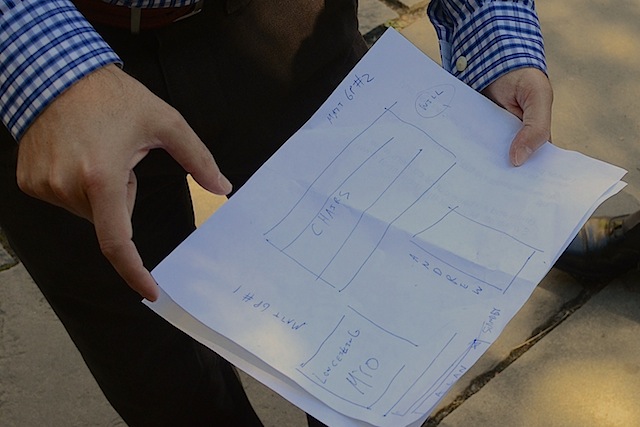 Super fancy diagram for the crew made by Agent Matt Adams. 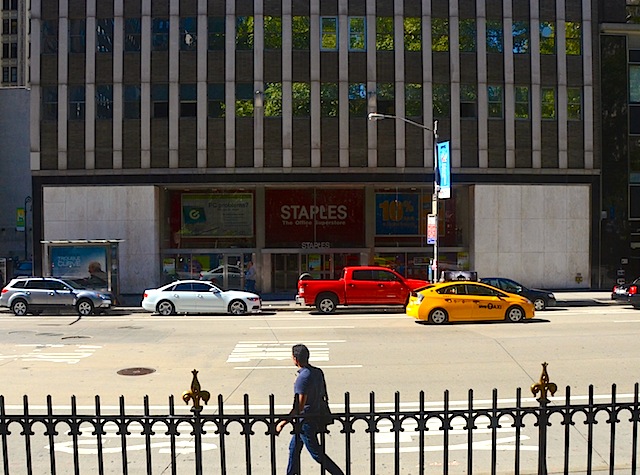 We met in Bryant Park, across the street from the Staples. After briefing the participants (who did not know what the mission was going to be before showing up!), we dispersed and entered the Staples one by one. We synchronized our watches and picked an exact time that they would all take their seats. 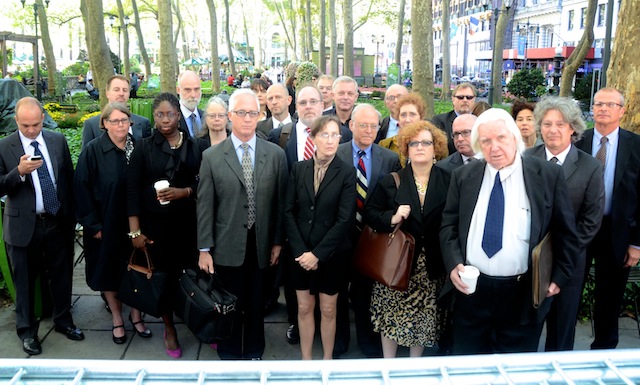 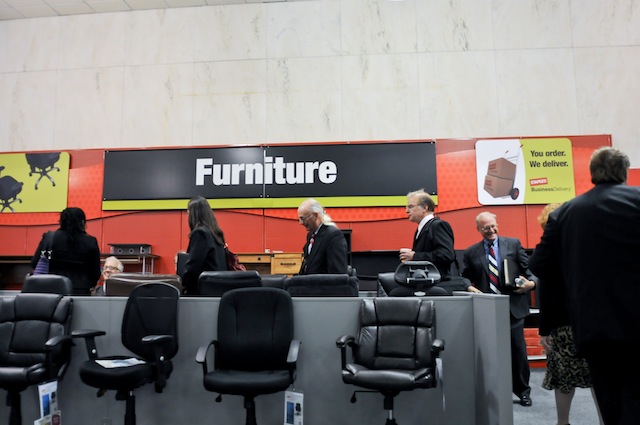 Board members take their seats. 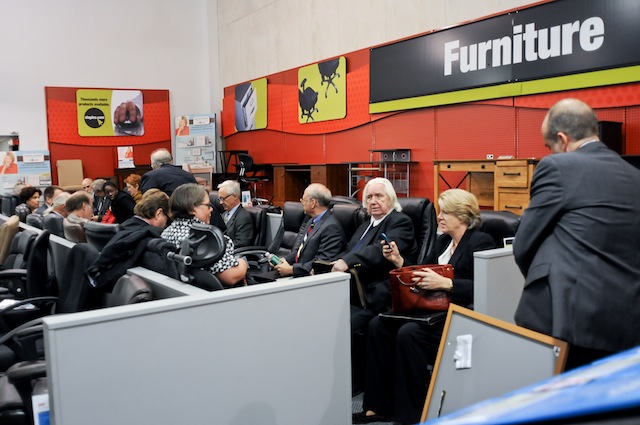 I cast Agent Will Hines as the gentleman making a presentation to the board. Will was considerably younger than the board members, but old enough to look like he was worthy of their time. He purchased a whiteboard and easel from the Staples and then took it over to the chair department to set it up. 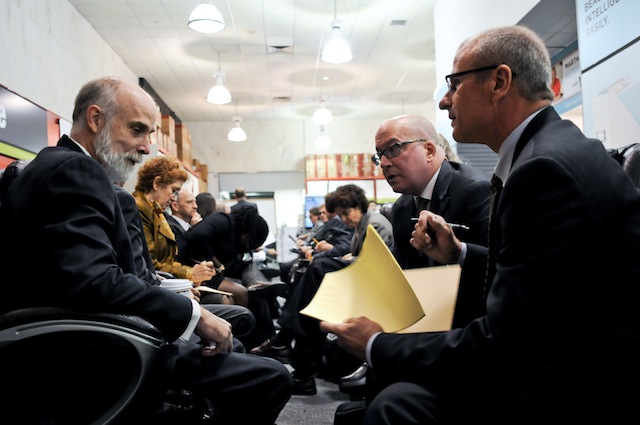 Pre-meeting discussions among members of the board. 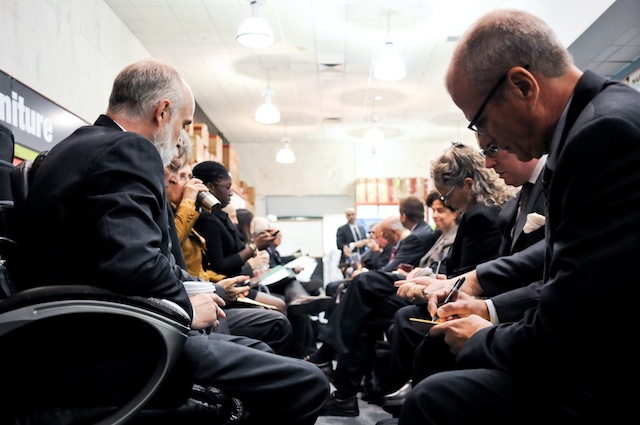 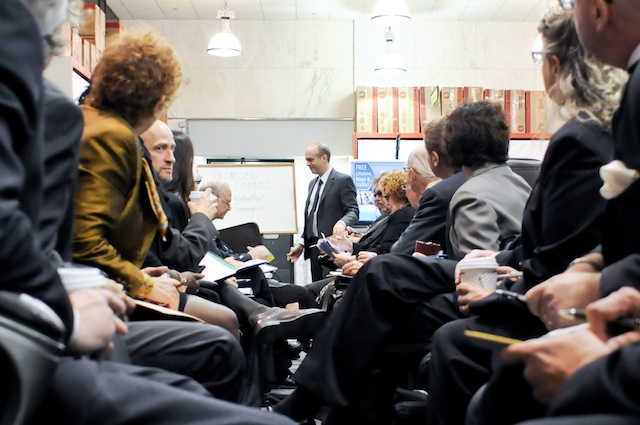 Agent Hines discusses his plan for a waterfront condo development in Greenpoint, Brooklyn. 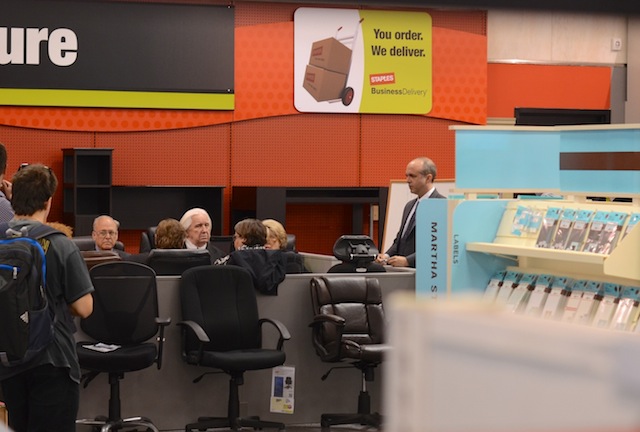 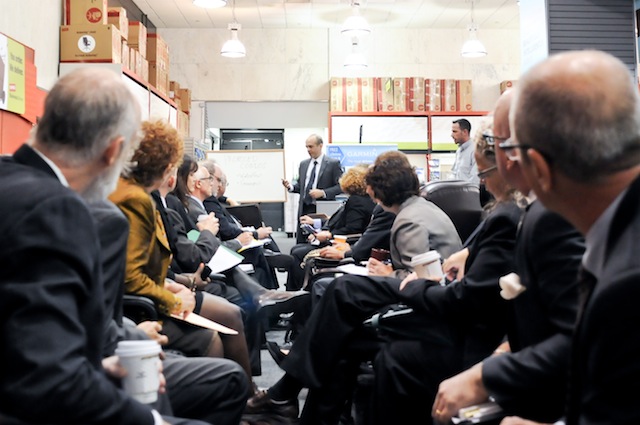 It didn’t take the manager long to arrive on the scene. 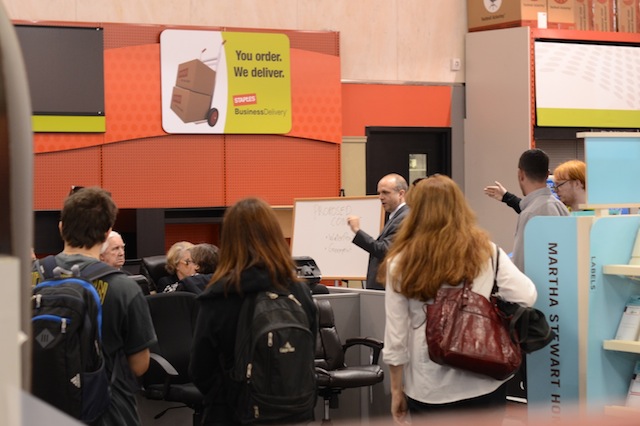 The manager discusses the situation with a fellow employee as customers watch the meeting. 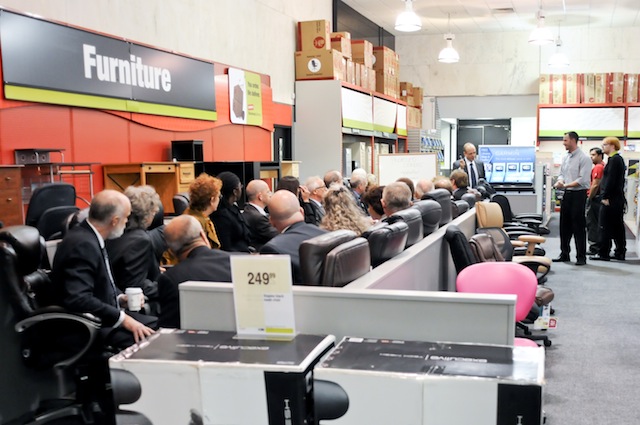 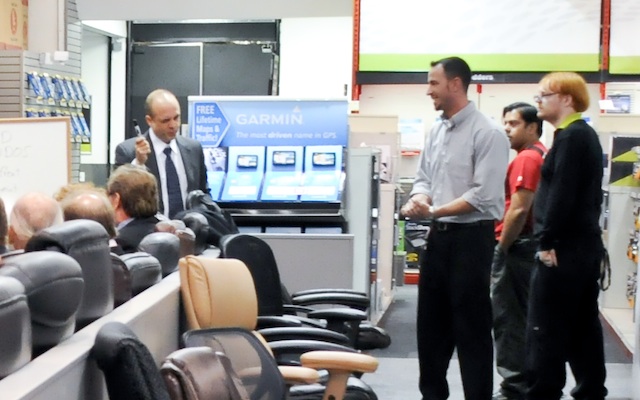 Manager: “You guys can’t have a meeting here.”
Hines: “Hmm. Did you check with Carol? We reserved the room with Carol.” 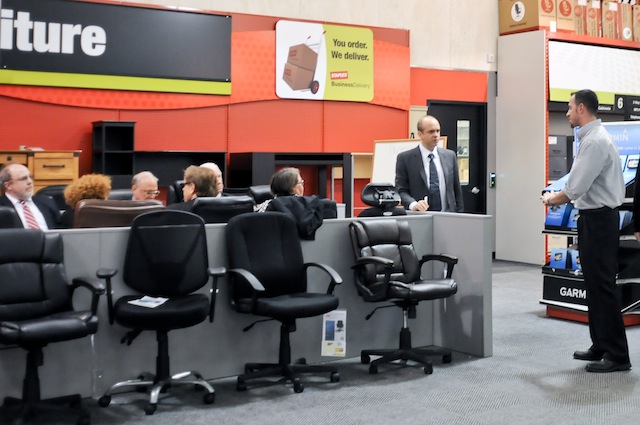 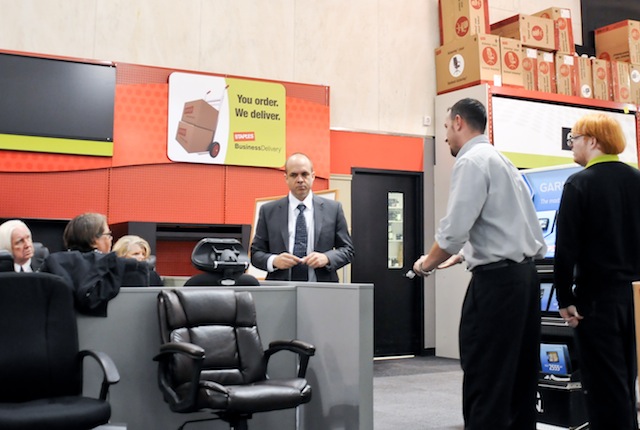 The manager’s working theory was that the board members were simply confused. The Staples was located at 1065 6th Avenue, which is also the address for the office tower above it. He tried explaining to them that they must have entered the wrong door by mistake. The entrance to the office building is on 40th street while the entrance to the Staples with the same address is on 6th Ave. I guess the explanation that 25 people couldn’t tell the difference between an actual office and a Staples showroom floor was more plausible than the explanation that a group of people in their fifties and sixties were playing an elaborate prank on his store. 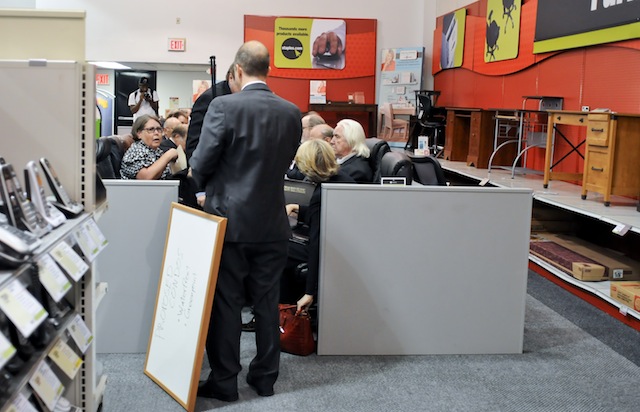 After much discussion about who had checked the room out, Agent Hines agreed to leave. The boardroom members expressed their disapproval at his obvious schedule mistake. 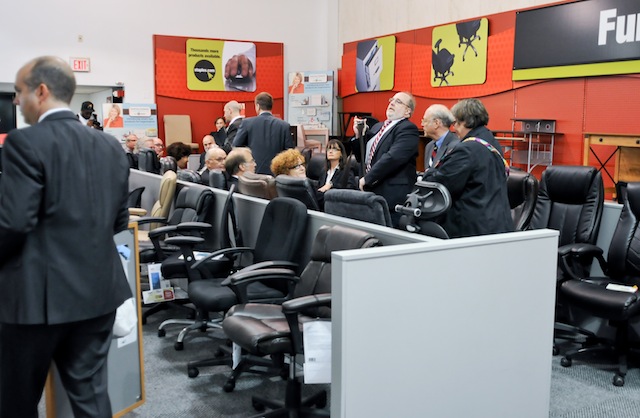 The board filed out slowly, taking the time to shake hands and engage in some small talk on the way. Within a few minutes everyone was out of the store. As soon as everyone was out of sight the manager and his fellow employees started laughing. I stuck around with a hidden camera and had a few conversations with them. The manager had an alternate theory, which was that Agent Hines was running some kind of pyramid scheme. A scheme so shady that he didn’t even have an office and fooled a bunch of people into thinking a Staples was his office. One employee mentioned that he had never seen “all the chairs” in use at the same time, and another declared, “That shit was funny as hell.” I have to say, everyone in Staples handled this ridiculous situation really well. 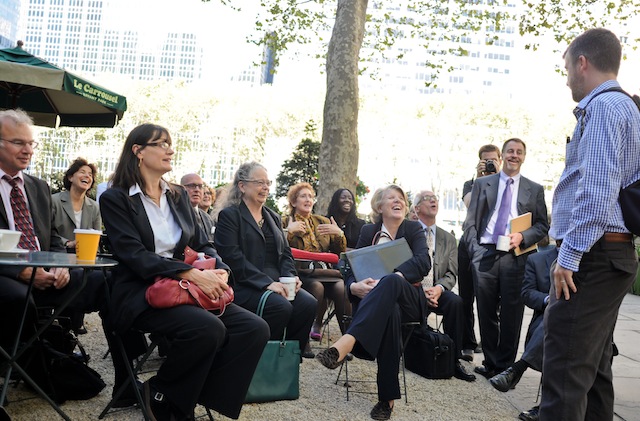 We met back up in Bryant Park after the mission to chat and laugh about the experience. While Improv Everywhere has had plenty of participants in this age group before (in fact a good percentage of the boardroom members had participated in previous missions), it was really fun to do something exclusively with people over 50. I don’t think the manager would have even entertained a discussion with a group of twenty-somethings having a meeting in his store. It would have been an obvious prank. Everyone who came out reported having a great time, and it just goes to show, you’re never too old to something ridiculous. 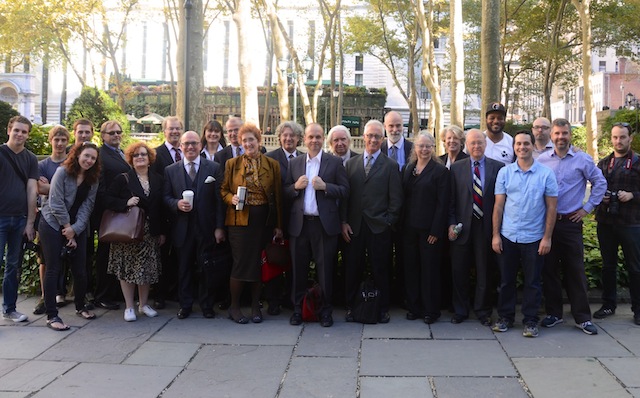