For our latest mission, we made 100 car alarms go off simultaneously in a shopping center parking lot in Staten Island. After parking their cars, 100 participants grouped together behind a 10-foot tall wall in a dead end on the other side of the lot. Participants were then conducted like an orchestra as they pressed their horn or “panic” buttons on their keyless entry remotes. Shoppers and employees at the Lowe’s and Kohl’s stores were surprised by this unauthorized and mercifully brief project.

Car Alarm Symphony was produced by Improv Everywhere as part of the Guggenheim Museum exhibition stillspotting nyc. This is our fourth collaboration in the series, the others being The Mute Button, Say Something Nice, and The Sleeper Car.

This idea has been on my list of potential missions for several years. It is sort of a sequel to our Cell Phone Symphony mission from 2006. For our series with the Guggenheim, we agreed to do a project in each of the five boroughs. When it came time to brainstorm ideas for Staten Island, I spent some time on Google Maps looking for interesting places. I immediately noticed that the borough had many huge parking lots, something you never see in Manhattan. If I was ever going to pull off Car Alarm Symphony in New York, this looked like the place to do it. 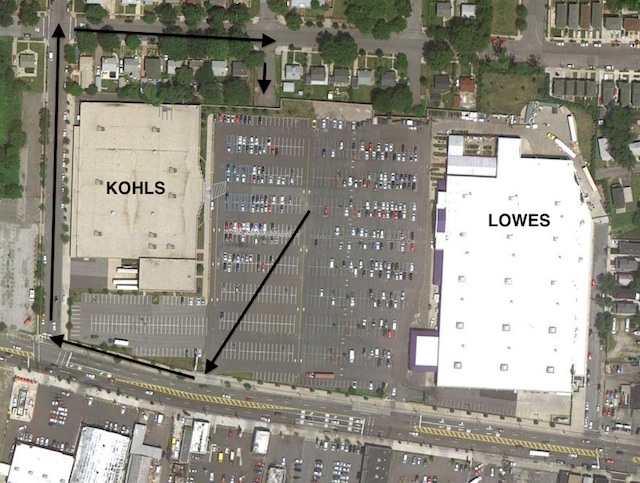 I rented a car and drove out to Staten Island to scout with Agents Matt Adams and Cody Lindquist. Of all the parking lots we visited, the giant lot between a Lowe’s and Kohl’s on Forrest Avenue seemed like the best fit. The one thing I couldn’t figure out was where to place the participants. Ideally we’d have them all clumped together like an orchestra, but how could we do that in the lot and not have it be totally obvious that we were pulling a prank? I thought maybe I’d just have them synchronize their watches and blend in with other people in the lot. Then the next day while looking at the lot on Google Maps again, I noticed a dead end on the other side of a wall. Perfect! My only fear: would it work? Would keyless signals travel over the wall? I knew nothing about the science of keyless remotes! 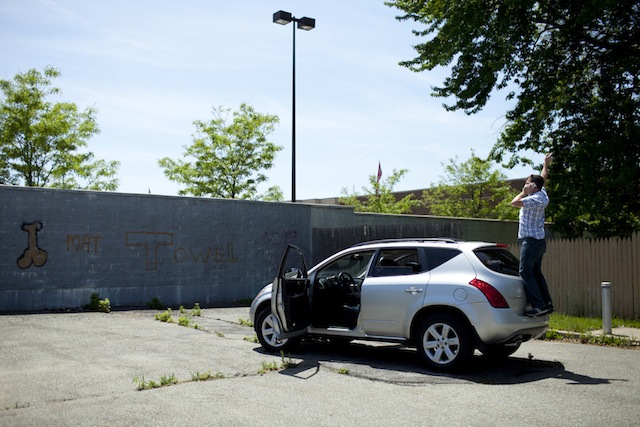 Testing the range
The day of the mission I arrived early and with the help of the cars of Agents Alan “Ace&Thugg” Corey and Jeff Kornberg, we did a little field test and verified it would indeed work. The dead end was perfect. We weren’t on anyone’s private property and we were perfectly concealed from the lot. As an added bonus, the wall had some graffiti, including a lovely misshapen phallus. 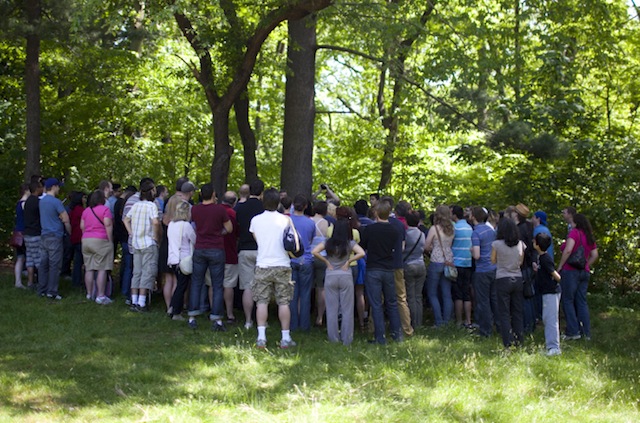 I sent out an email to our New York City mailing list to recruit participants who owned a car with a keyless entry remote and were willing to drive to Staten Island by themselves. I didn’t want extra people in the car because they wouldn’t be able to participate. When I first came up with this idea years ago, it didn’t seem possible to pull off since I knew few people with cars here in NY. Our mailing list has grown so large over the years that it was now possible. Many of the participants lived in Staten Island (perhaps the most car-friendly NYC borough) and others drove in from Long Island, New Jersey, and even Connecticut. Since I didn’t want to give out the idea over email, I had everyone first meet in Clove Lakes Park, which was about a ten-minute drive from the shopping center. 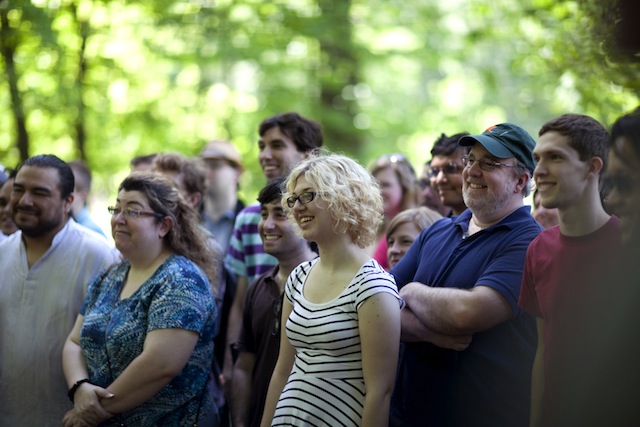 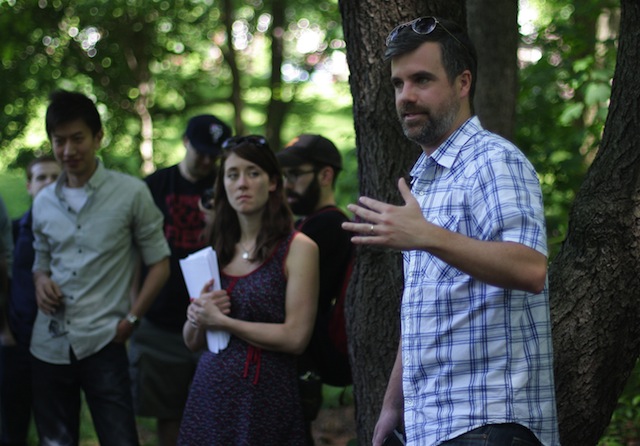 In retrospect, the recruitment email for this mission sounded pretty sketchy. One woman sent me a concerned email:

“Was your mailing list hacked? I just got an email via the agent mailing list asking me to fill out a form if I 1. Had a car with keyless entry, 2. Could meet in Staten Island 3. Could come alone. This sounds very suspicious to me.”

Well, when you put it that way, I guess it is a little suspicious! 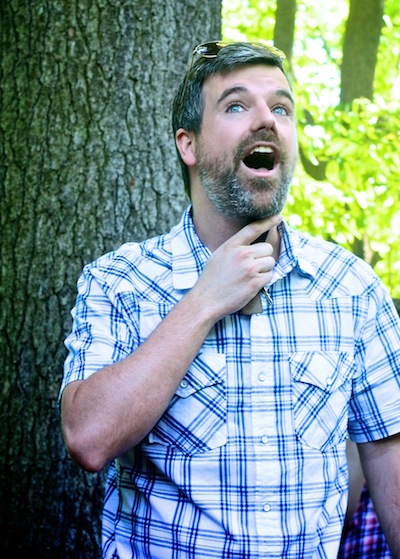 Demonstrating the chin technique
I did a little bit or research about keyless remote ranges and found out something really strange. If you put your remote underneath your chin and open your mouth, you can dramatically increase the range. I don’t know why but it works. We mostly stuck to lifting our hands in the air, but some participants used this method as well. 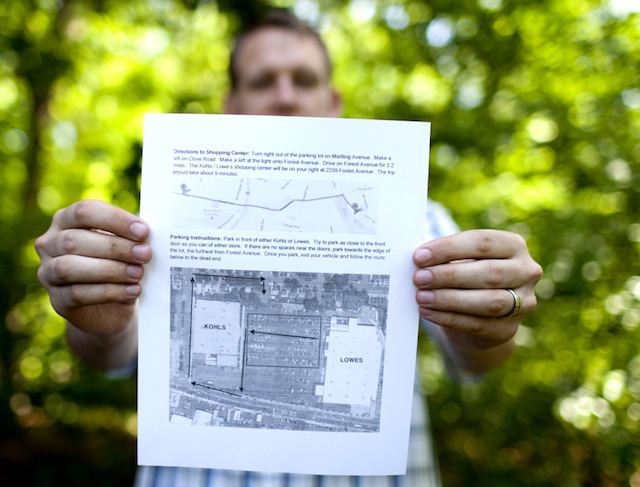 We passed out maps to all of the participants showing them how to get to the lot, where to park, and how to walk from the lot to the dead end. We gave everyone plenty of time to get over there, making sure we were spread out. I didn’t want a huge obvious single file line leaving the lot and walking around the corner. 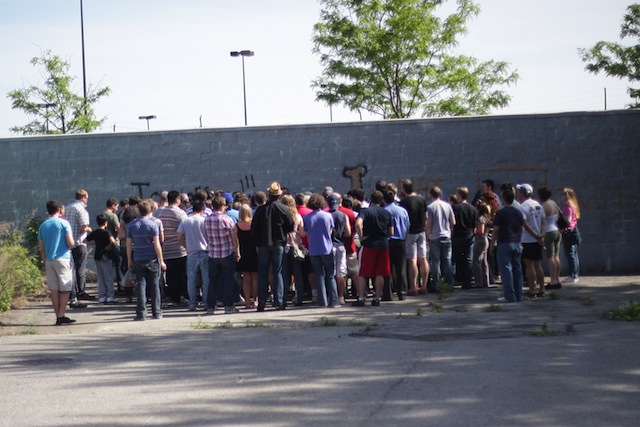 We had over 200 RSVPs and about 100 people showed up. I’m glad it wasn’t too many more, as there were only so many parking spaces in the lot. 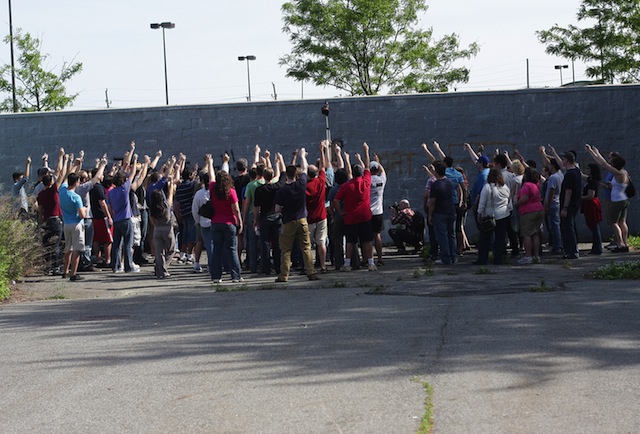 Obviously the “conducting” was mostly a metaphor, but I did actually conduct the group to go in waves. I wanted the sound to get more intense as more horns were added. 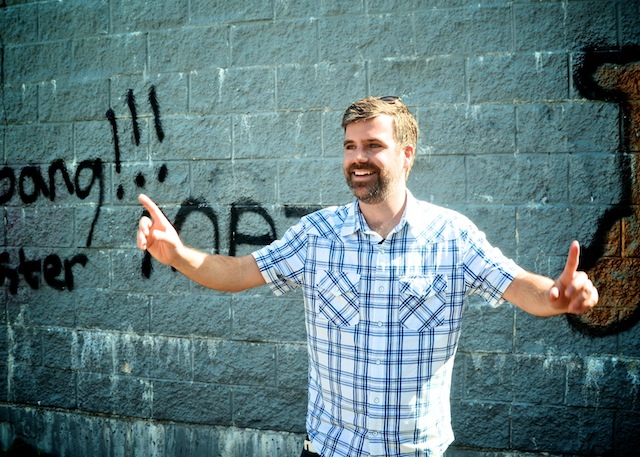 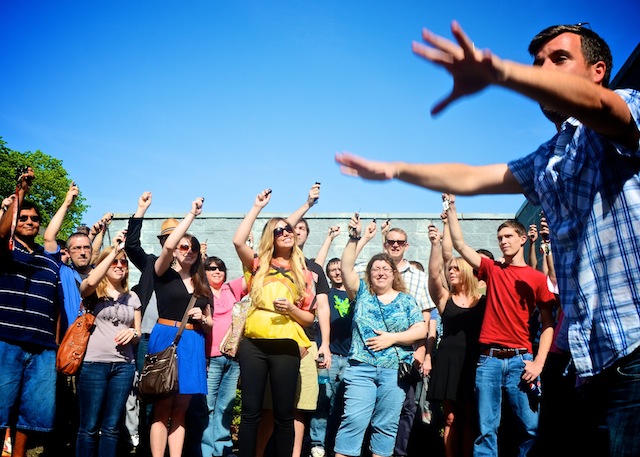 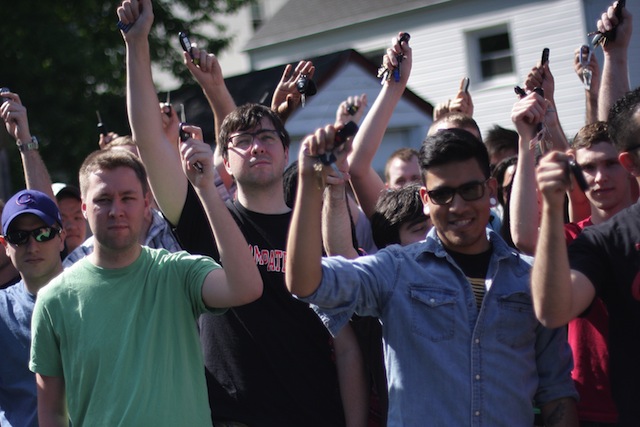 In the dead end, we could hear the horns, but we didn’t know how it sounded to be in the middle of the lot nor did we know how people were reacting. Agent Cody Lindquist served as our undercover contact in the lot, texting me reports. It’s tough to capture how crazy it was in photographs since this project was so dependent upon sound, but there were many surprised people in the lot. Obviously car horns are not a pleasant thing, but we hoped that the sheer volume and absurdity of it all would make it a unique experience for the people who witnessed it. Some enjoyed it more than others, and there were quite a few laughs. 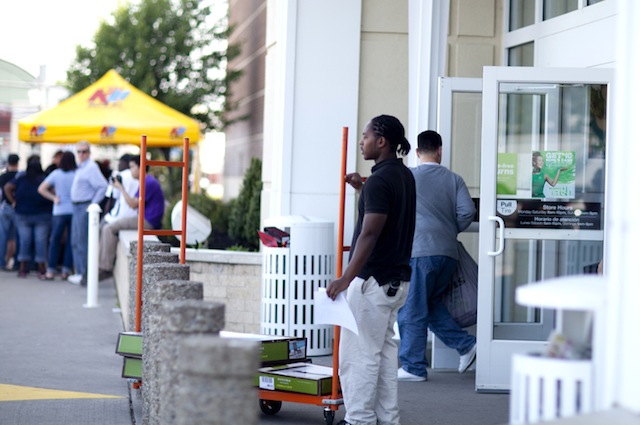 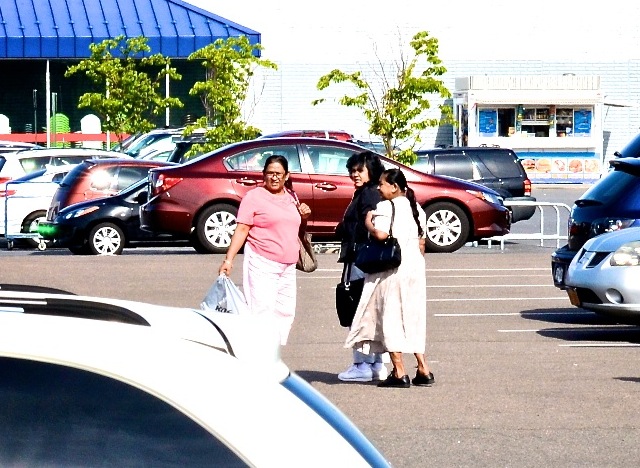 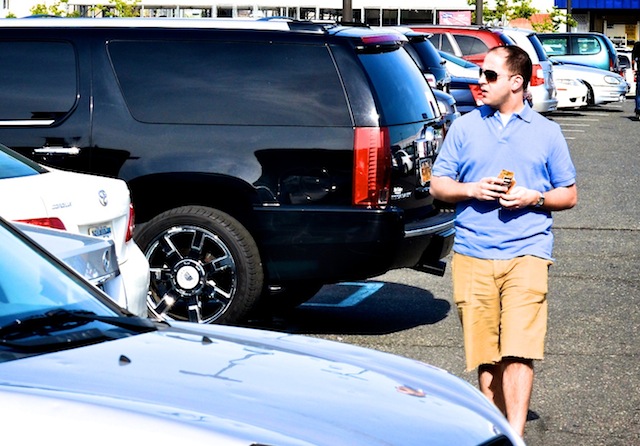 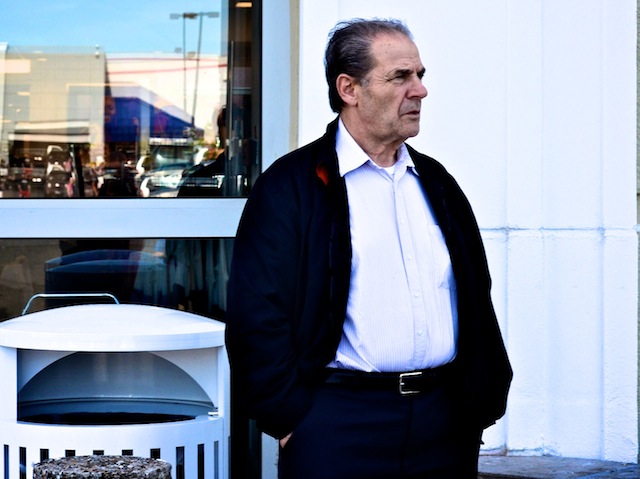 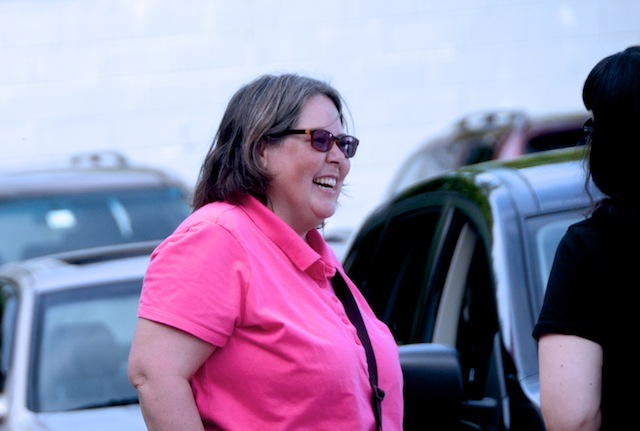 Probably the biggest challenge of this mission was turning the horns off. Some keyless remote panic buttons cue the horn to honk for a finite amount of time. Others go on indefinitely unless the button is pushed again. How would participants on the other side of the wall know if their car was honking or not? It could take forever trying to silence them without knowing which remote needed to be pressed. Mid-mission one participant suggested a nice solution, which was to have everyone hit lock on their remotes. Most cars will exit panic mode if you hit lock. Even with this trick it took quite a bit of time to quiet all of the cars. We also realized that at any point someone else’s car might be going off. It might not even be one of ours! 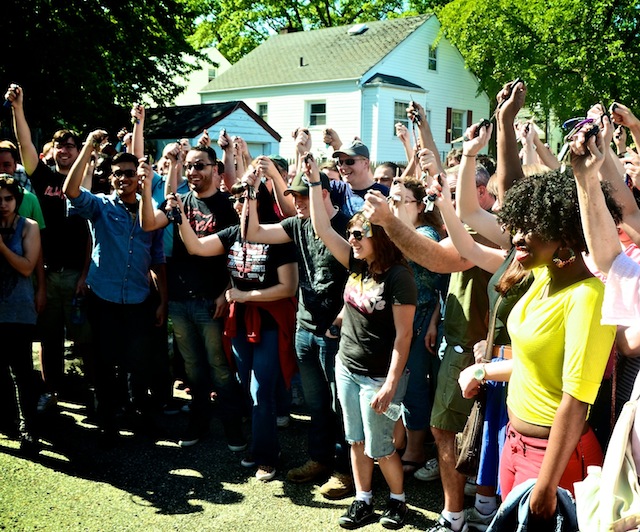 Although the video compresses the event to one big blast, we actually staged it three times at the dead end and then one final time as the participants were leaving. We synchronized our watches and set off the alarms at the same second as we walking to our cars. As a final touch, we had everyone pop their trunk.

About half of the participants had time to meet back up at the park after the mission to talk about the prank and hang out. We posed for a group photo before leaving. 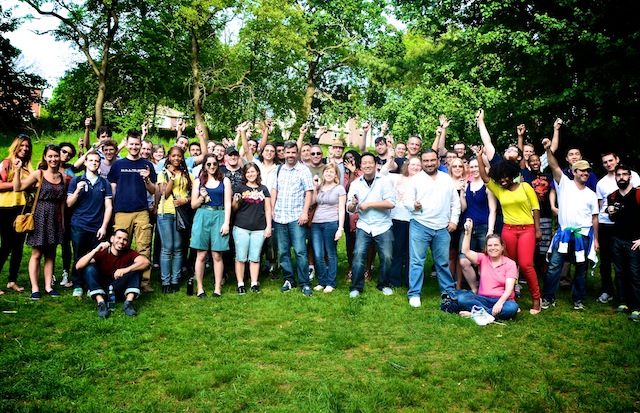