For our latest mission, a musical breaks out at a shopping mall in New Jersey. A man is suddenly compelled to express his desire to sit on Santa’s lap via song. This is the fifth in our series of Spontaneous Musical projects. Enjoy the video first and then go behind the scenes with our report below. 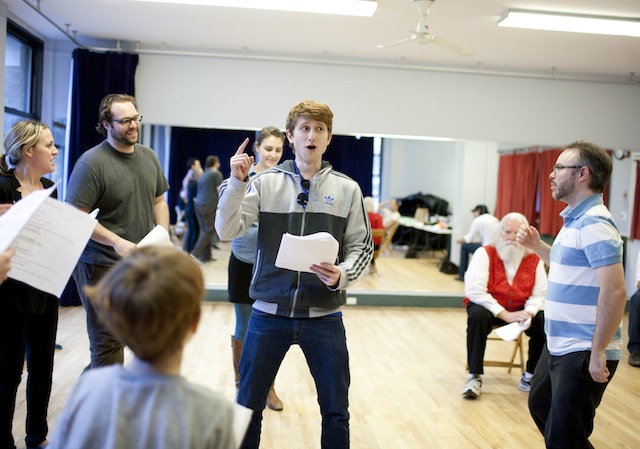 Agent Brown working with the cast at our first rehearsal 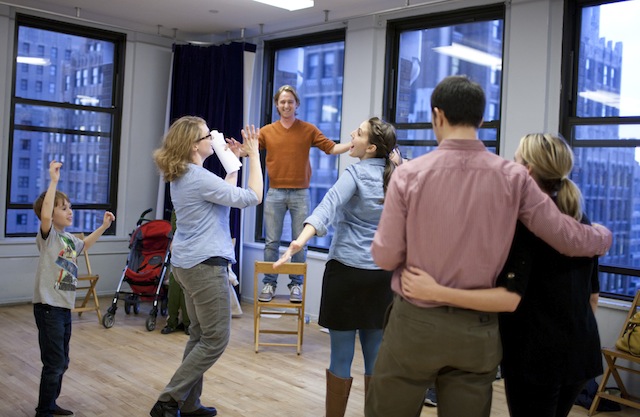 Most of our cast had performed in previous Improv Everywhere projects, but we also added some new performers who we had not worked with. I was thrilled when I learned Evan and Michael Gregory of The Gregory Brothers fame were available for the mission. Not only are they hilarious YouTube stars, they’re super nice and cool dudes. Agent Sebastian Thomas was cast to play the young kid. He’s nine years old, making him our youngest musical performer! Agent Rich Klimaski was brought in to play Santa Claus, a role he plays quite frequently this time of year. It was sad doing a Santa Claus-themed mission and not having our dear friend John Ward there to be a part of it. John of course played Santa for us in the very first Mp3 Experiment.

Here’s a video I shot at our rehearsal of the cast running through the song: 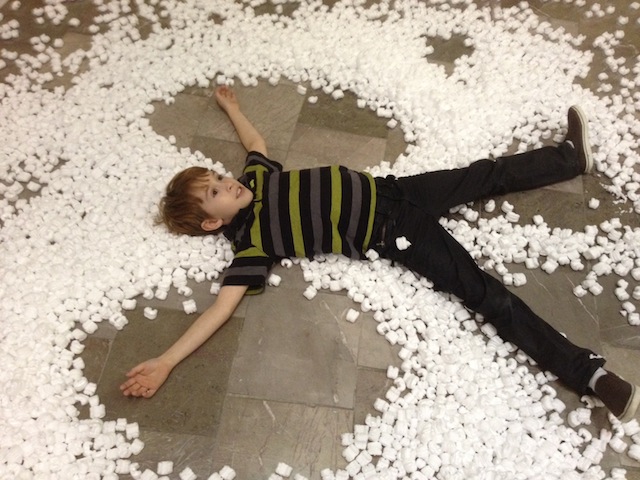 Agent Thomas makes a Styrofoam angel at dress rehearsal
We had a dress rehearsal in the mall the night before the mission. Although many Improv Everywhere projects are unauthorized, the production values needed to pull off one of our musicals requires permission. We worked with production company Generate and hidden camera experts TV Boy to install hidden cameras and microphones at the mall. 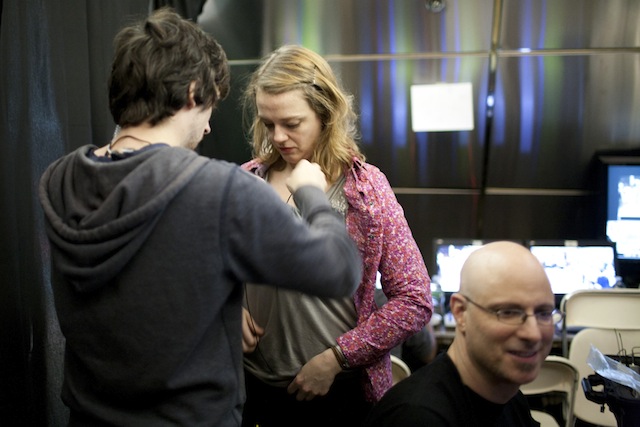 Agent Amy Heidt gets mic’d up 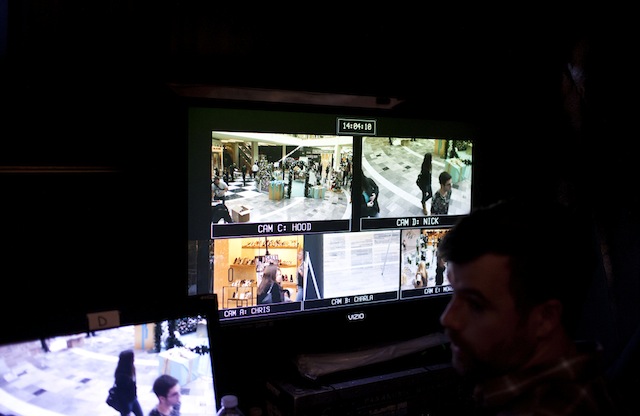 Our hidden camera angles in our secret control room
Working with the mall enabled us to take over their Santa set up. They had a Santa working that day, and we staged the mission during his breaks, swapping out their Santa for our Santa each time. 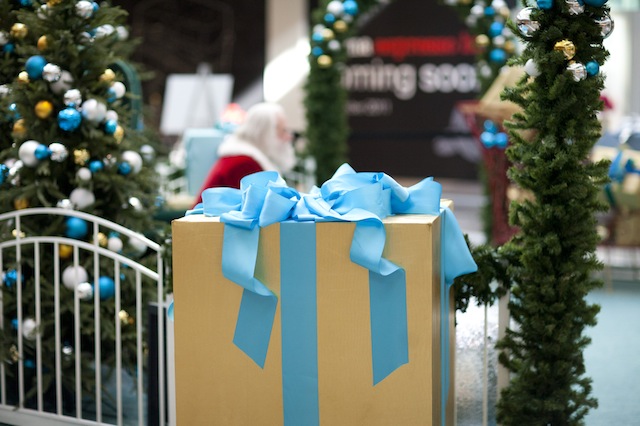 We staged the mission a few times throughout the day, waiting for the crowds to change between them. Hilariously, Agent Michael Gregory hid inside the giant Christmas present for a good ten minutes before each take, ensuring no one there saw him get in. 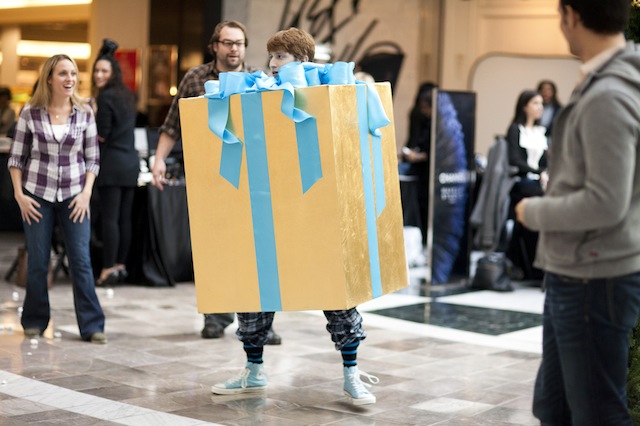 The Christmas present in action 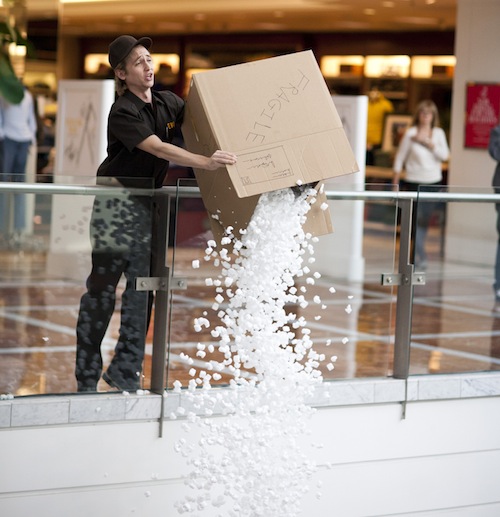 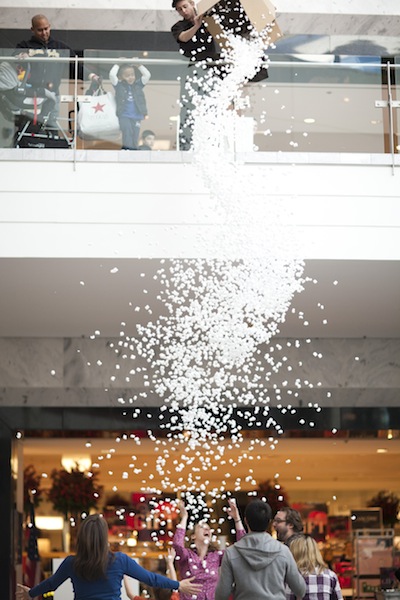 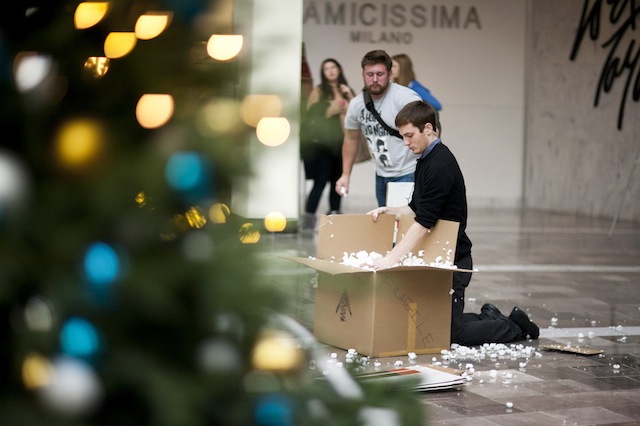 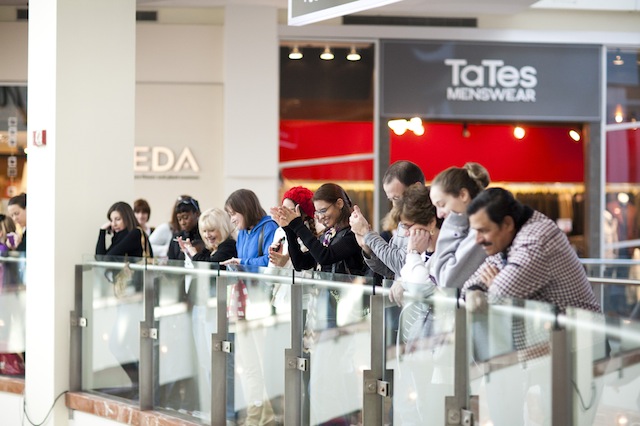 The area we staged the musical in had a really great balcony above it. For each take we had a full crowd of people watching from above in addition to those on the ground level. 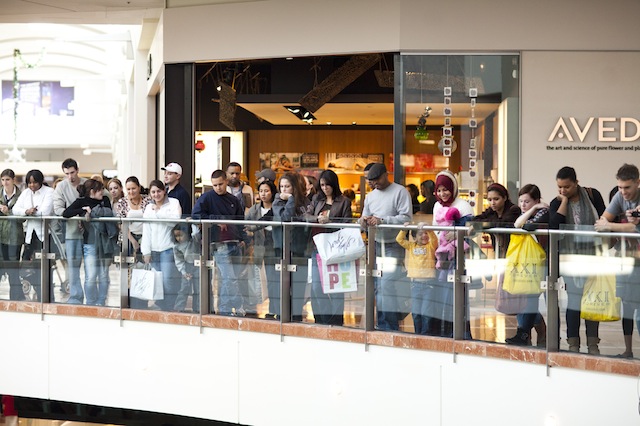 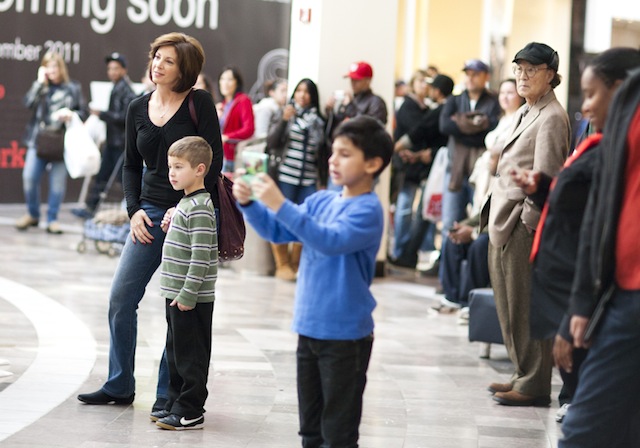 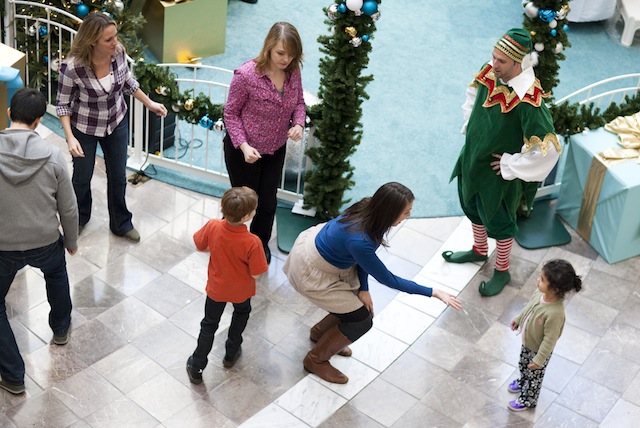 During one take, a little girl loved it so much that she walked right up to the performers mid-song. 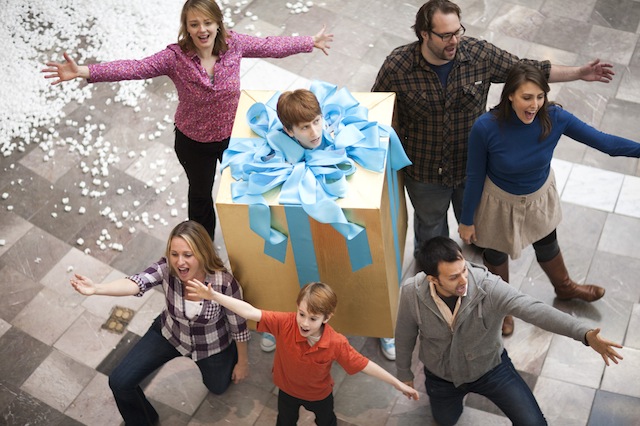 Since this is our fifth musical, we wanted to make sure there were some surprises in to set it apart from the previous ones. We developed a fake ending concept, where it seemed like the musical was over and that a guy working the Santa photos in an elf costume actually wanted our actors to leave the area. Of course he, along with Santa, turned out to be in on it. 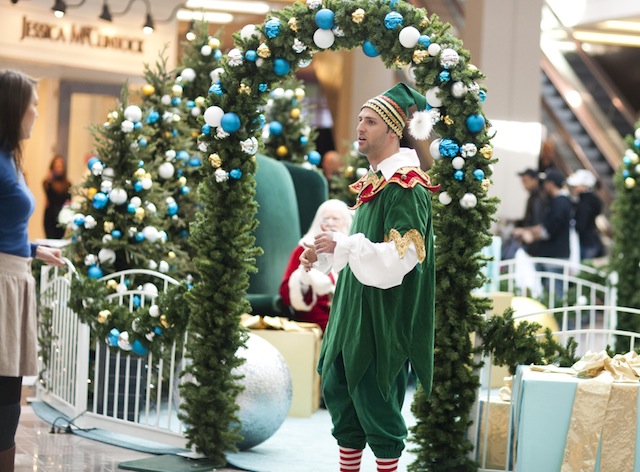 Agent Don Fanelli as the Elf 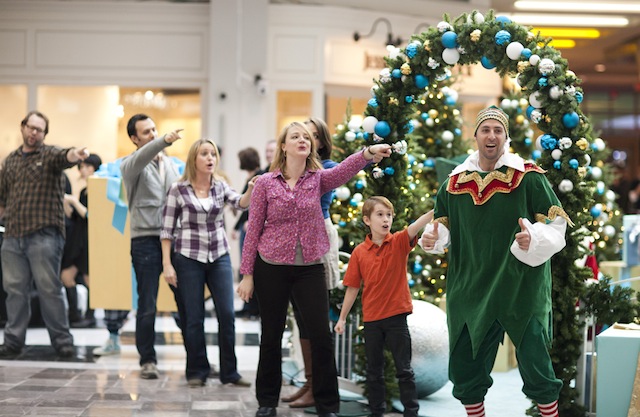 We actually cut a section of the song out of the video, which you can see in the photo above. The Elf joined in the song for a few lines as everyone sang the chorus one last time. What we found out staging the musical was that our fake ending was actually too good. Everyone applauded and many folks started walking away. So a certain percentage of the audience left the area without realizing Santa and the Elf were in on it. It felt a little anti-climactic in the video, so we cut it out. You can see the original full song in the rehearsal video above. 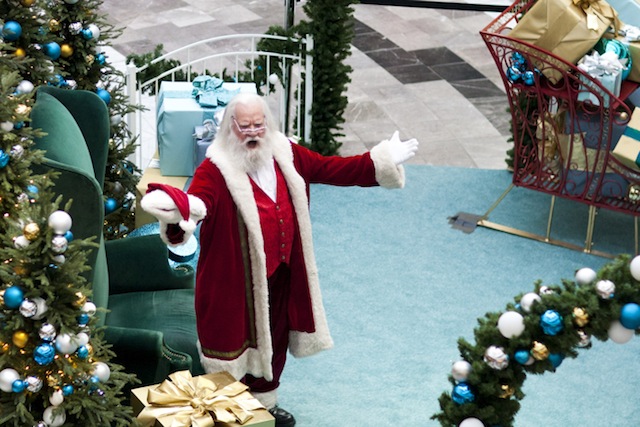 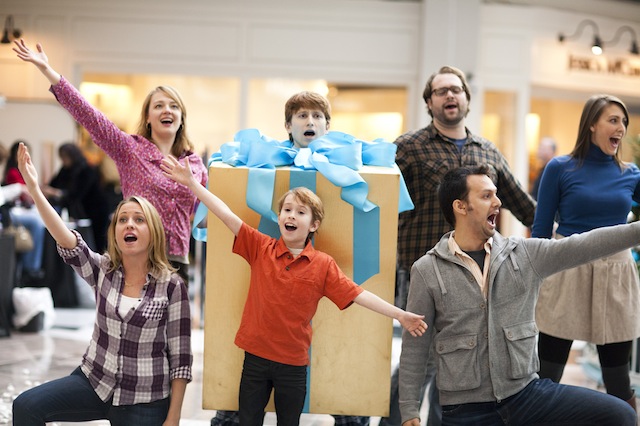 Photographer Agent Katie Sokoler decided to hide in the box and surprise people, long after the mission was over. 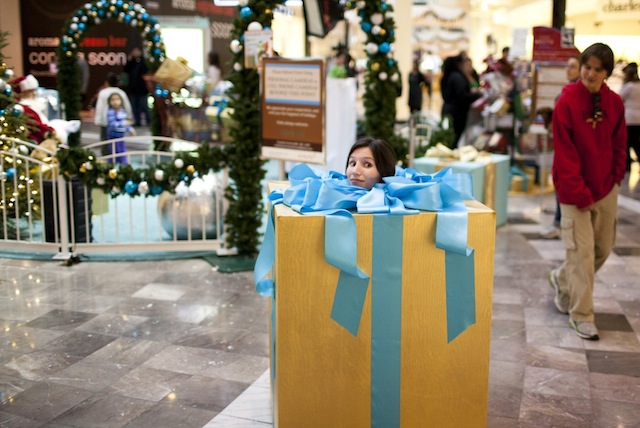 – Gregory Brothers’ vlog from the day: