For our latest mission we constructed a custom wooden lectern with a megaphone holster and an attached sign that read, “Say Something Nice.” The lectern was placed in public spaces around New York and then left alone. We wanted to see what would happen if New Yorkers were given the opportunity to amplify their voices to “say something nice.”

Say Something Nice was produced by Improv Everywhere as part of the Guggenheim Museum exhibition stillspotting nyc. This is our second collaboration in the series, the first being The Mute Button. 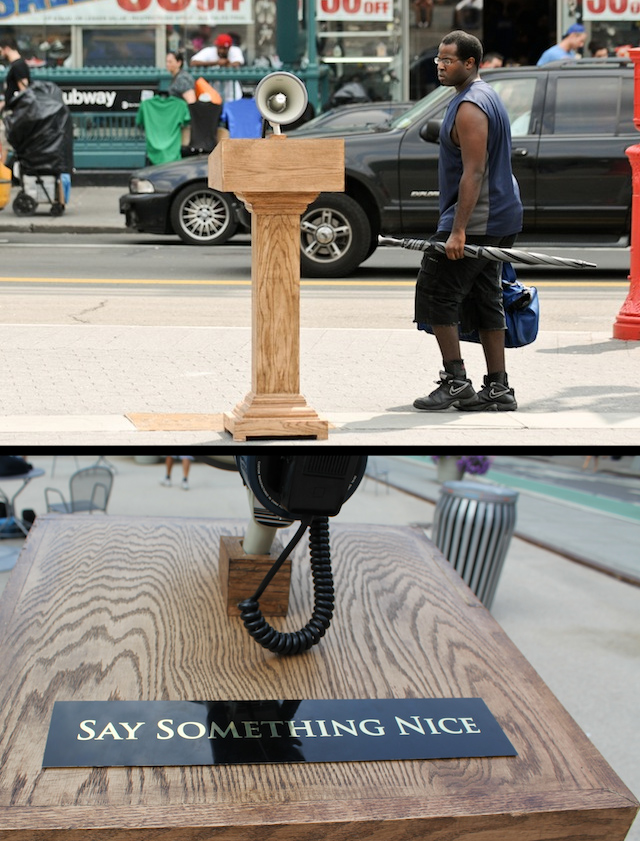 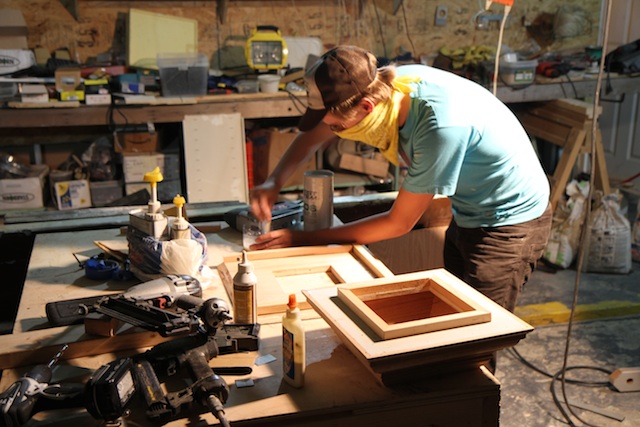 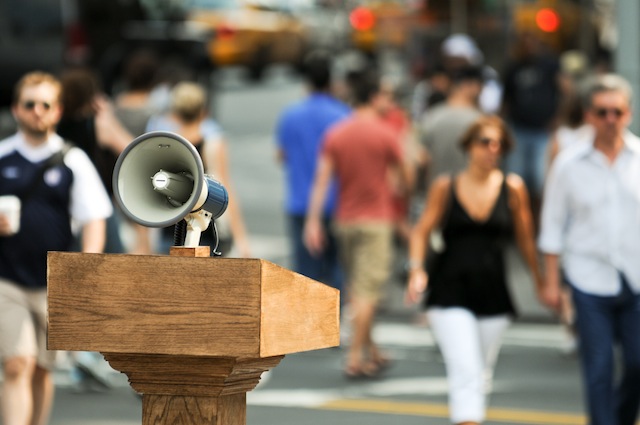 Improv Everywhere is most well known for our missions involving hundreds or even thousands of people. I was excited about this mission, because apart from the two guys who moved the lectern into place, there were zero actors. The stars of this mission would be random members of the public who chose to say yes to our simple request. 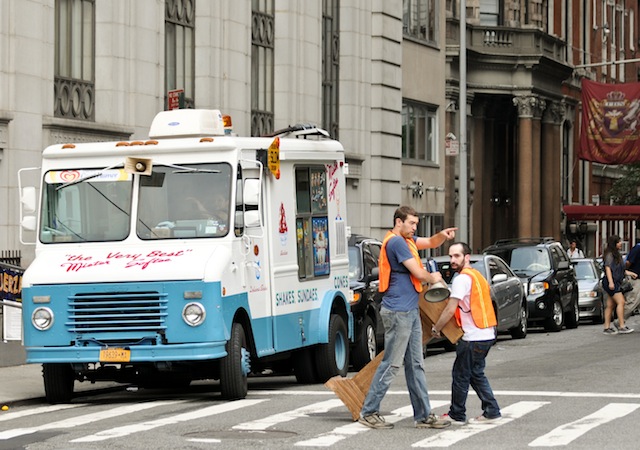 Agents Jason Eppink and Keith Haskel played the “movers.” Wearing orange vests to give them an air of legitimacy, they placed the lectern at the southern tip of Union Square and then vanished. 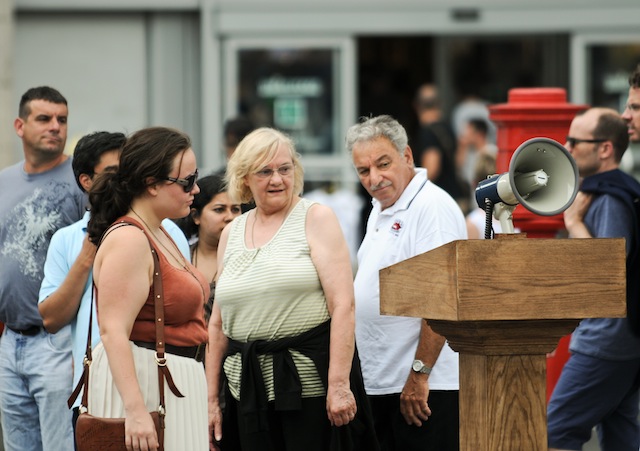 The lectern was in a very high-traffic area, and people immediately started to take notice, stopping to read the sign. 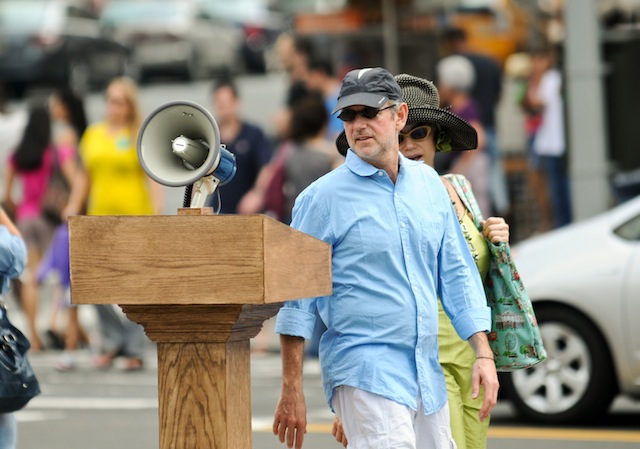 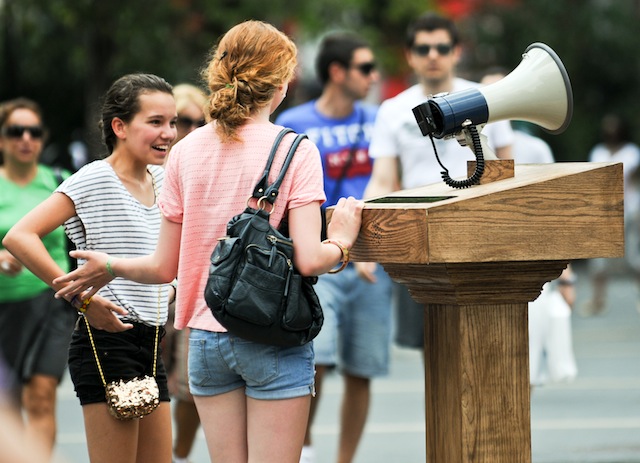 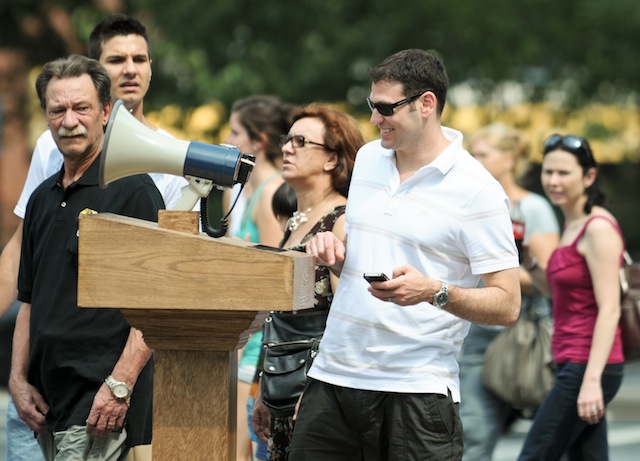 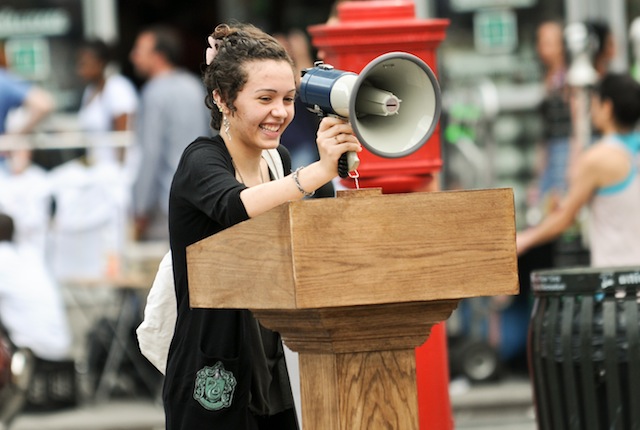 The megaphone was attached by a cable, allowing people to take it out of its holster but not allowing them to walk away with it. Within a few minutes people starting using the megaphone. There is always a crowd of people at this part of Union Square, so there was a built-in audience of people sitting on the steps. 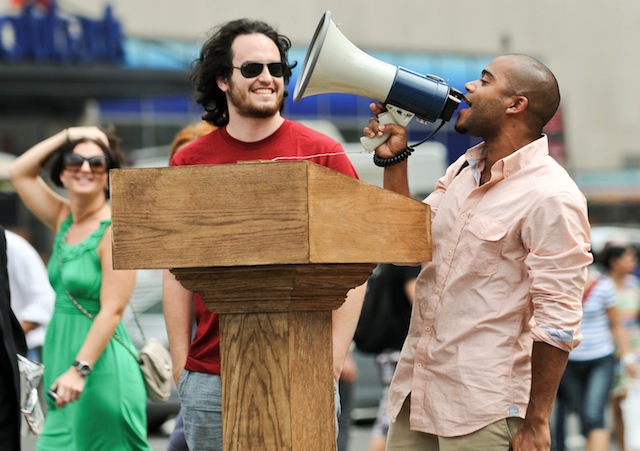 “I love my friend here in the red shirt!”
The reactions to the lectern varied. Some folks ignored it. Some stopped, but decided to take a picture rather than following the instruction. Of the people who chose to speak, there were many recurring themes with “I love you,” “I love New York,” and “Have a great day” being the most common responses. 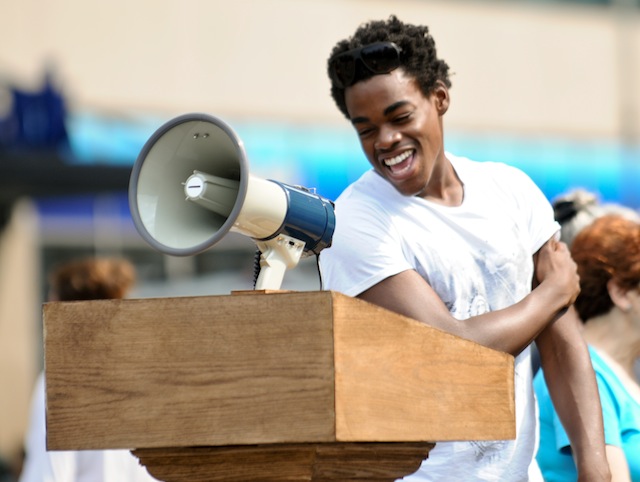 The guy in the photo above was surpisingly the only one all day to make the joke of just saying “something nice” into the megaphone. 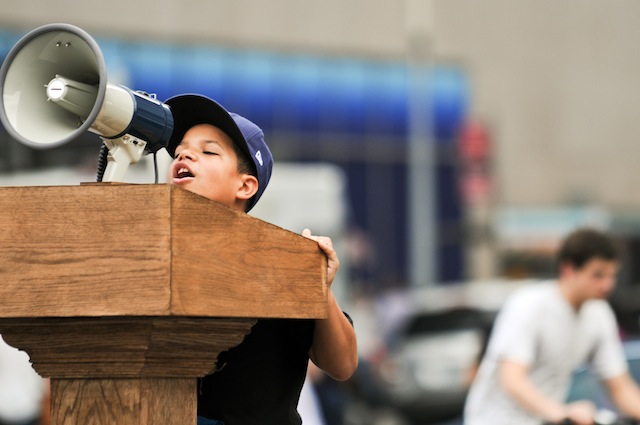 The megaphone was about five-feet tall. We probably should have included a step, as some of the younger people who encountered it couldn’t quite reach. 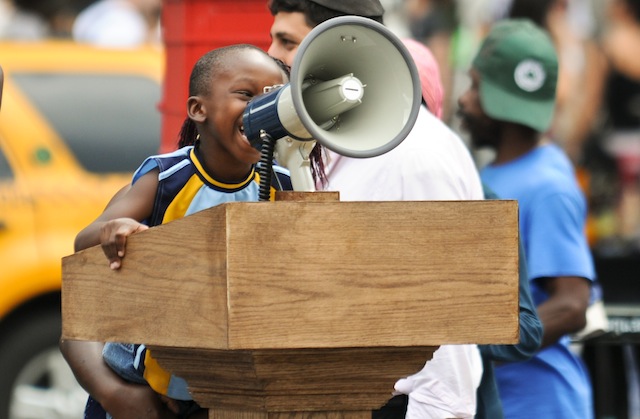 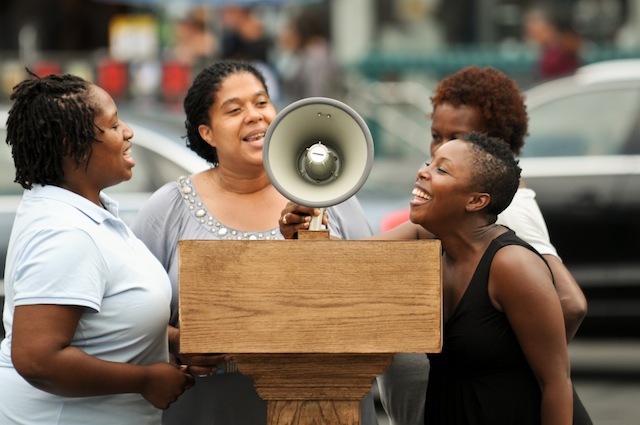 These ladies decided to say something nice via song. 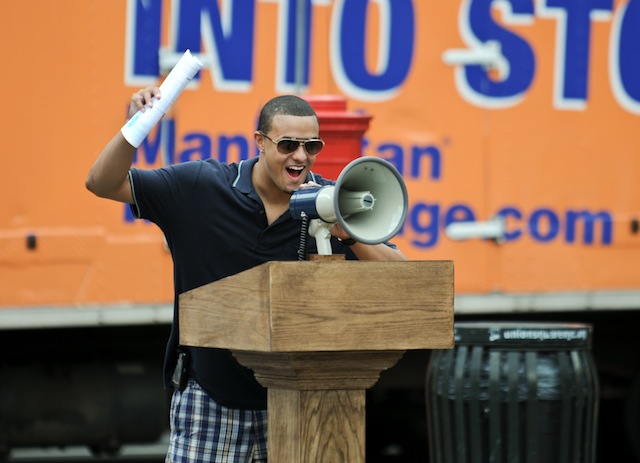 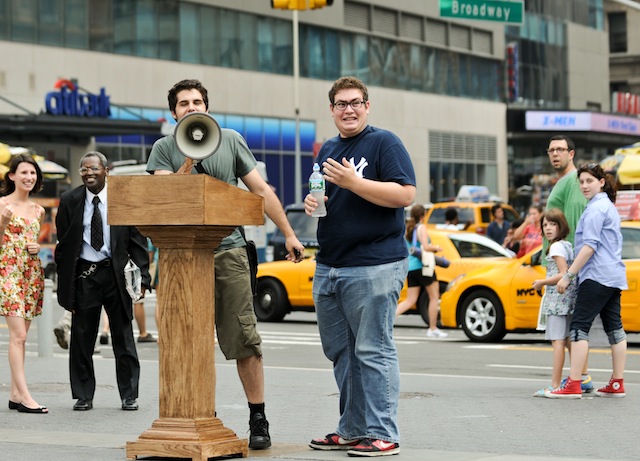 Not everyone followed directions. The guy above called out his friend (standing embarrassed next to him) for backing out on moving into his apartment. One woman used the megaphone as a way to promote an event she was working on. Someone else thought the megaphone was a good opportunity to give a lengthy monologue about Christianity. So while a few were opportunistic, we were pleased that the vast majority of the people who encountered the lectern got the spirit of what we were going for. 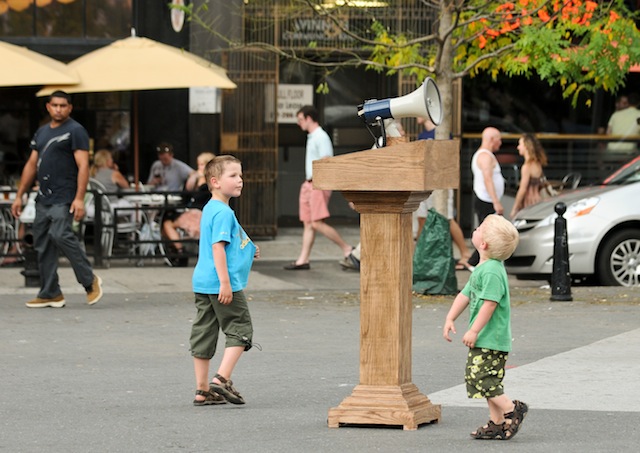 After about a half hour, the moving guys in the orange vests appeared again and transported the lectern to a few other places in the area. We stopped at the north end of Union Square and then finished up in the public plaza across the street from the Flatiron building (and just a stone’s throw from The Tourist Lane!) 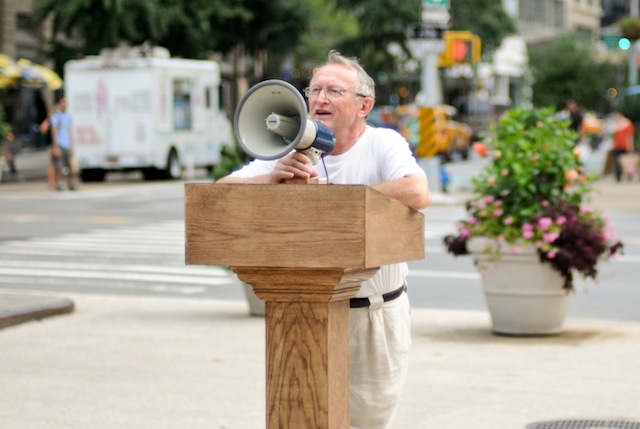 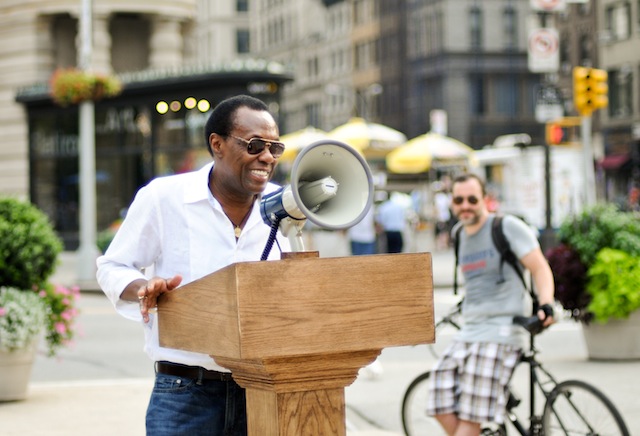 It was fun seeing such a wide range of people using the megaphone, young and old. 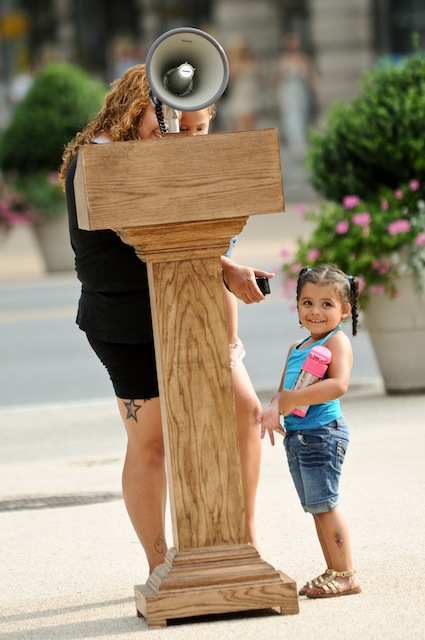 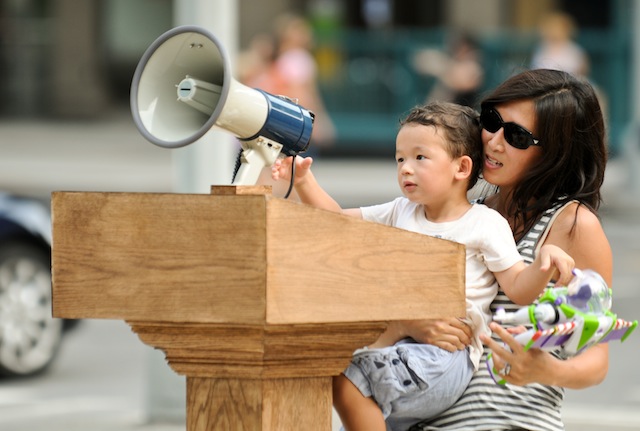 “To infinity and beyond!” 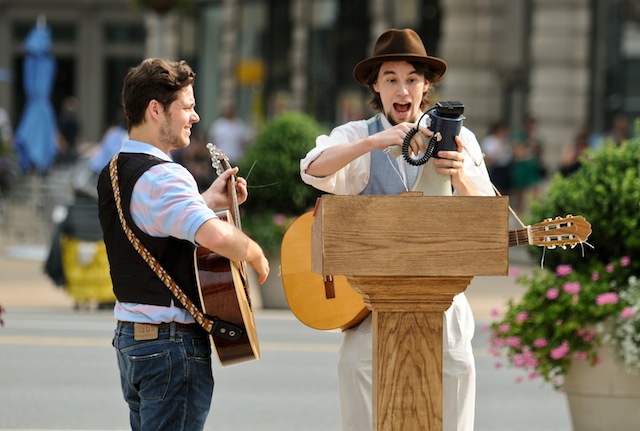 These guys stopped to play a little song before saying something nice. 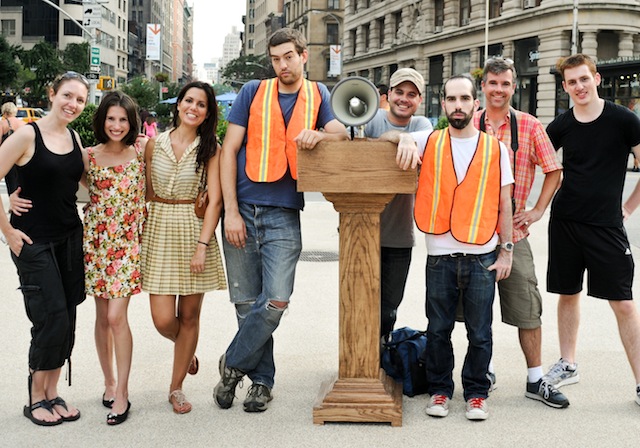 Crew photo
It was exciting to stage a mission that we had so little control over. Unlike our more performance-based projects, the results of this one were entirely in the hands of random people who happened upon the lectern. It was tons of fun setting it up and watching the results.

Now, I have to figure out what to do with this thing, because it barely fits in my tiny office! 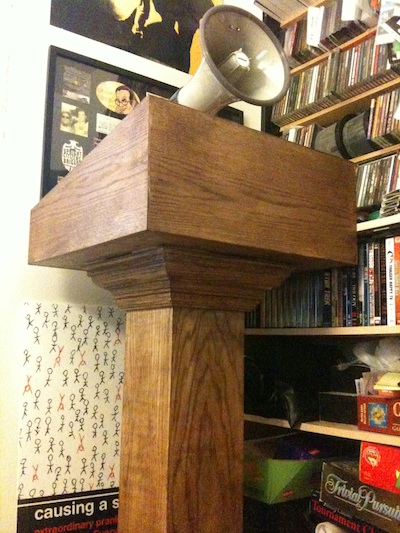