For our latest mission we turned a carousel into a horse race. A single jockey was joined by two announcers, a roaring crowd, and a trumpeter. The children on the carousel had no idea what was going on. The mission took place at Le Carrousel in New York’s Bryant Park. 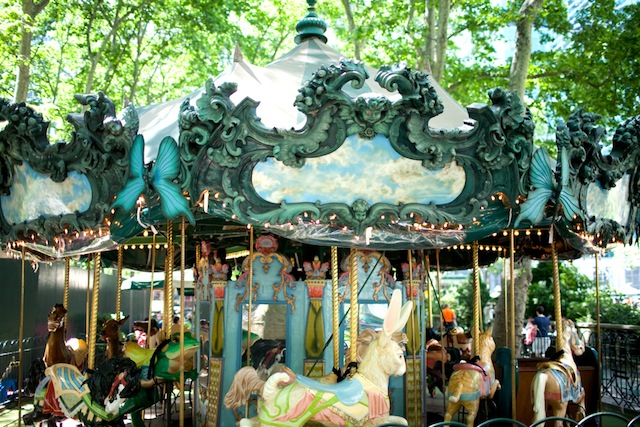 I came up with this idea almost six years ago. It has always lingered on our list of potential upcoming missions, and this summer I decided it was time to make it happen. The original idea was to have a dozen jockeys take over a carousel. I sent out an email to our New York Agents List looking for people over 16, under 125 pounds, and under 5’6”. The response was great, and I had more than enough volunteers.

I ran into problems when it came time to find costumes. Most jockey outfits for sale online are crappy looking, overpriced Halloween costumes (and many are “sexy jockey.”) I knew I wanted to get real equipment, but buying or even renting the real thing would not be cheap for 12 jockeys.

Then I had an epiphany: the mission would actually work better if the focus was on the kids. Rather than it being one or two kids on a carousel reacting to our jockeys, why not just treat the kids like they are the jockeys and have one of them win the race? I decided to keep one actor jockey whose presence would spark the transformation. 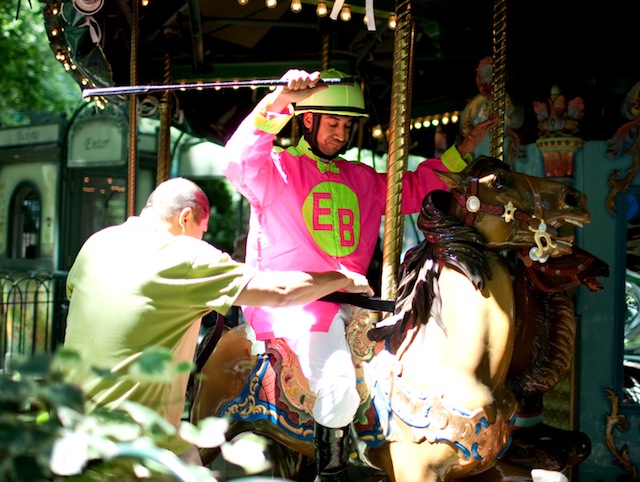 Agent Shafeek was the most senior member of Improv Everywhere who fit the physical description of a jockey, and he agreed to play the part. We waited until the carousel had a nice crowd of children and then cued our jockey to enter. 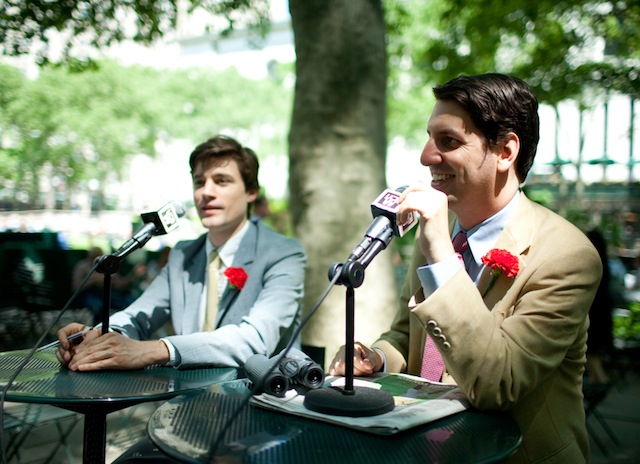 After the jockey was strapped in to his horse, Agents Rodgers and Scordelis appeared as announcers. Their microphones were plugged into a small amplifier, and heads began to turn in the park as they began their commentary. 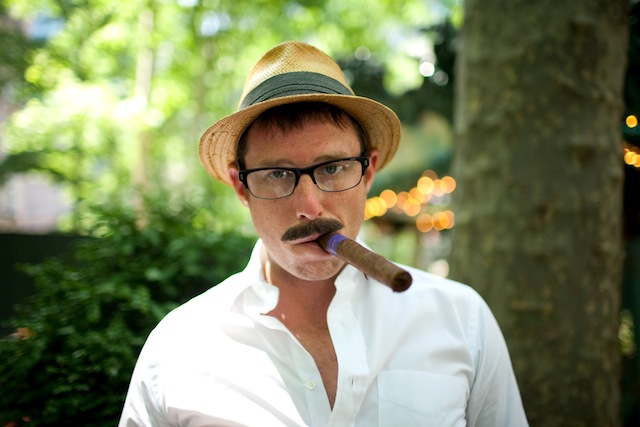 The patrons arrived next, a small crowd of well-dressed horse race fans. Agent Silver, above, probably had the best costume thanks to his fake mustache. 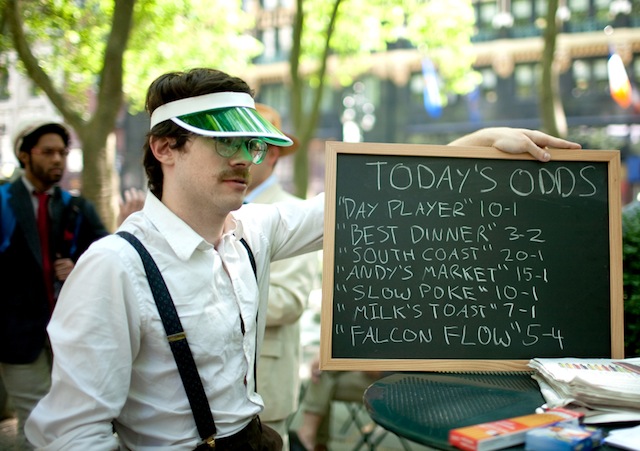 Agent Hart set up a betting table and the crowd excitedly got their bets in right before the race started. His mustache is real. 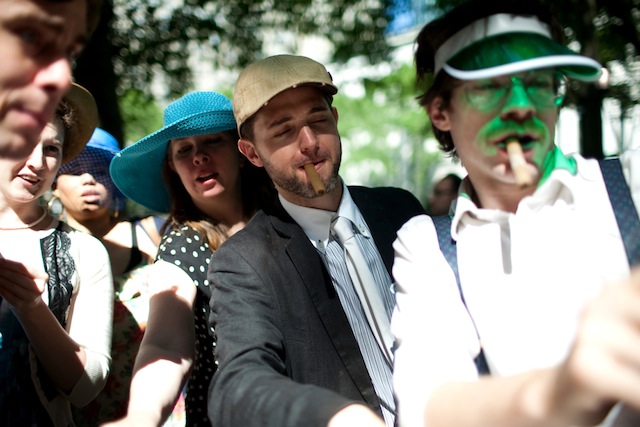 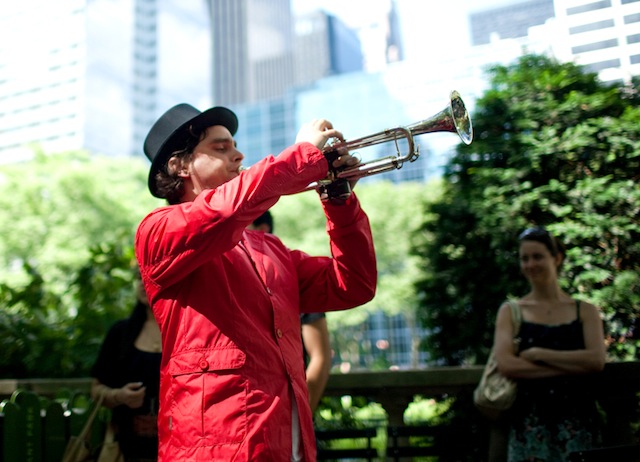 Agent John McGrew walked out in front of the carousel for the call to the post. His trumpet got the attention of everyone in the park, and a crowd started to form. 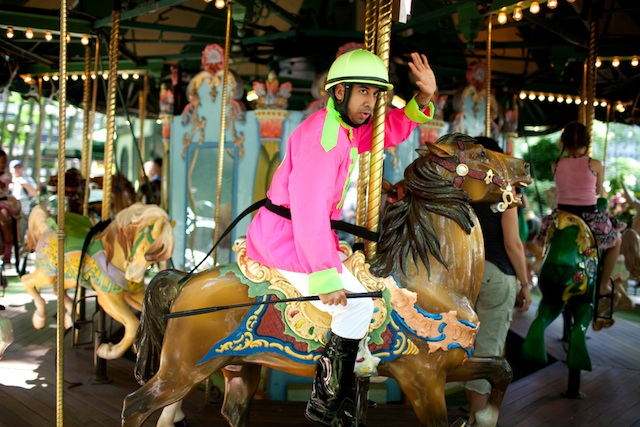 Agent Shafeek waves to the crowd 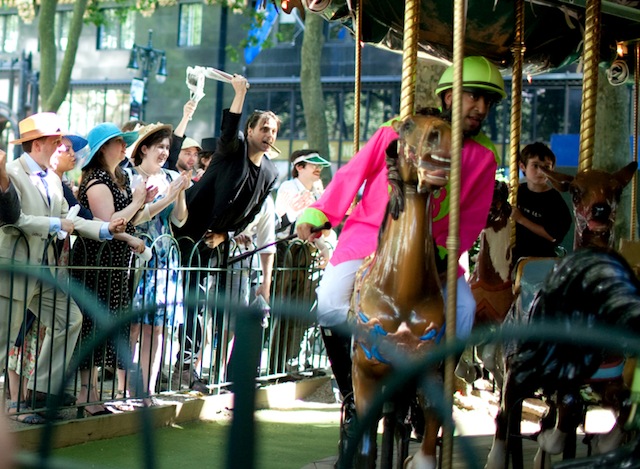 After the trumpet player finished, the bell rang, and the race began. Agent Rodgers called the race, making up names for all of the animals. One of the reasons I picked this carousel was due to its assortment of non-horse animals. The frog, bunny, cat, and deer provided lots of laughs. 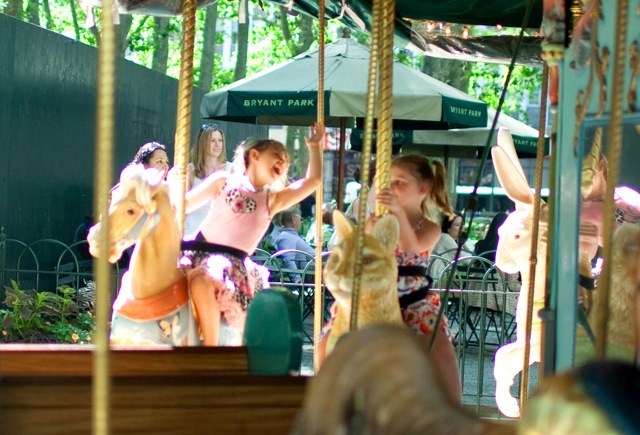 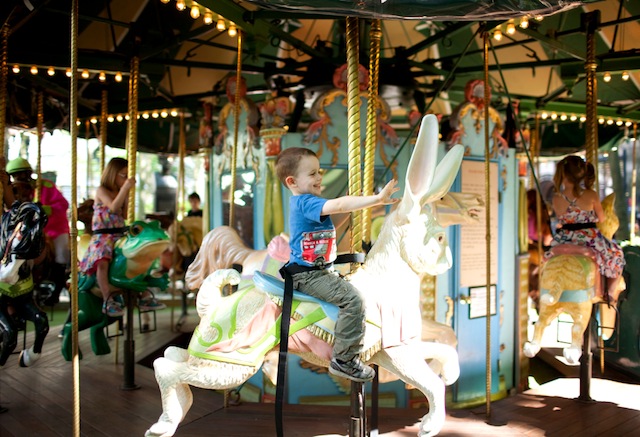 Waving to his mom 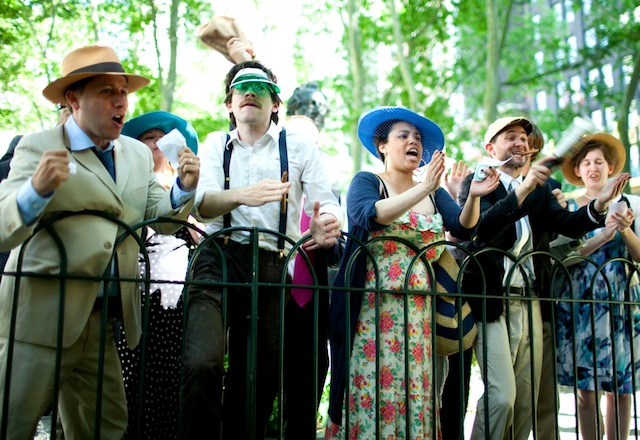 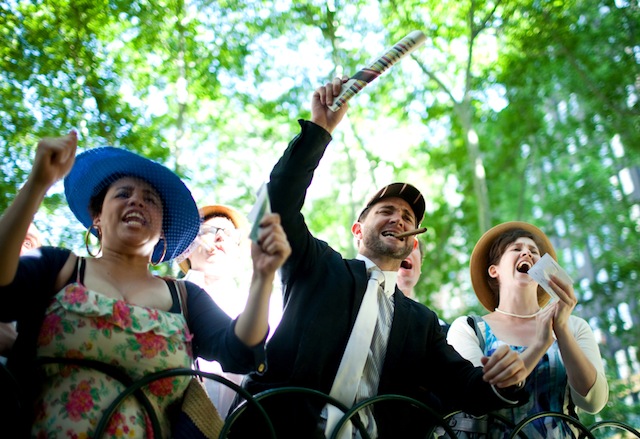 The kids were a little shell-shocked at first, not knowing what to make of the crowd loudly cheering them on. It didn’t take long for them to get into it. By the end, everyone was smiling and playing along. 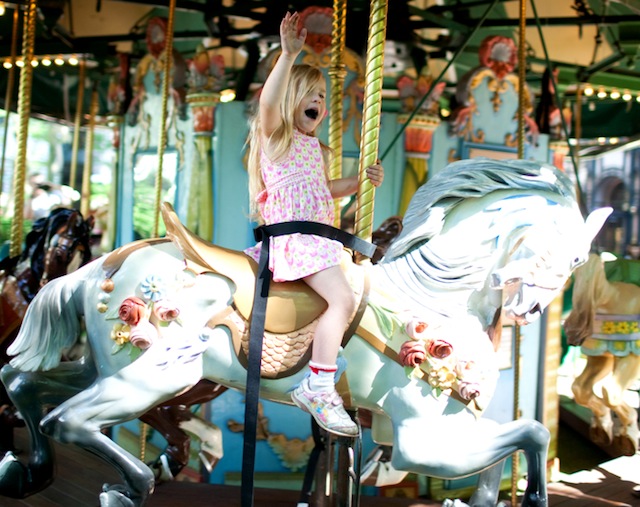 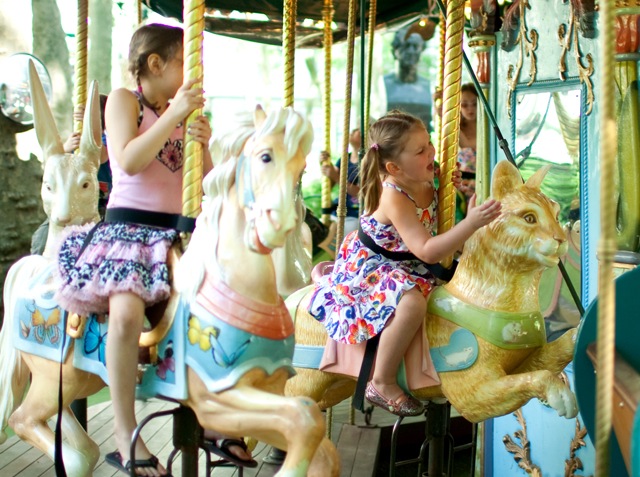 The girl riding “Kitty Kitty Bang Bang” was especially enthusiastic, hitting her animal and screaming for him to go faster. 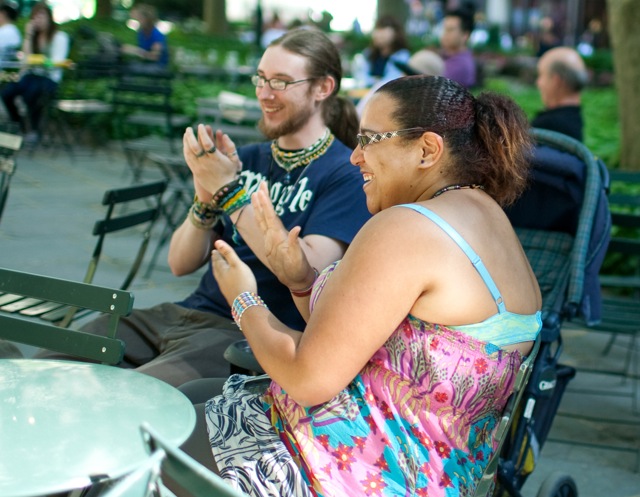 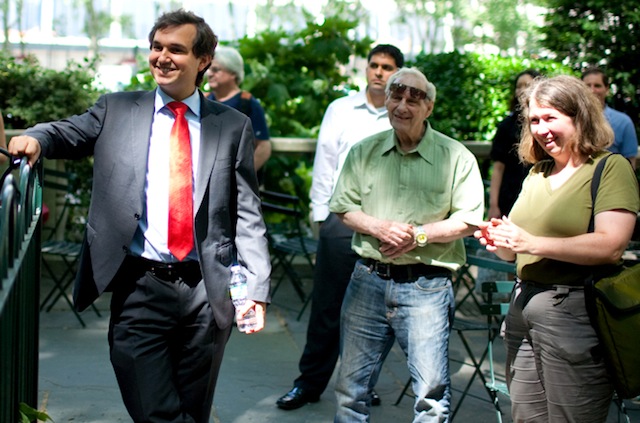 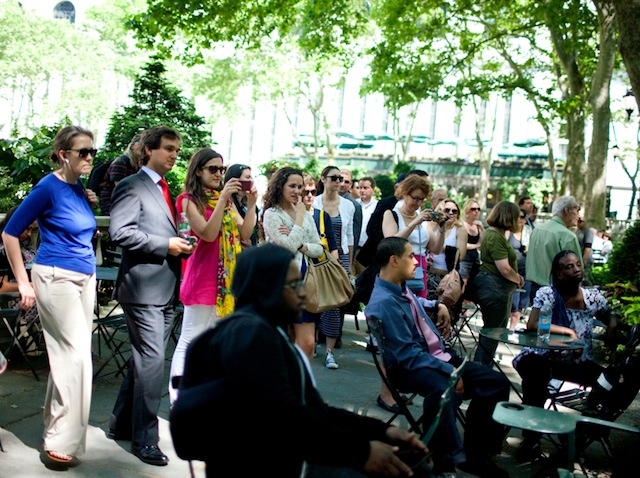 The crowd of spectators got larger and larger as the race went on. Many in the crowd were parents of the children in the race, laughing and taking photos of their kids. 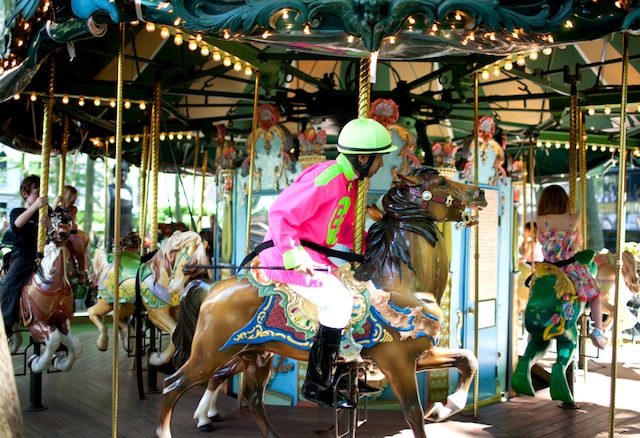 “And there goes the frog!” 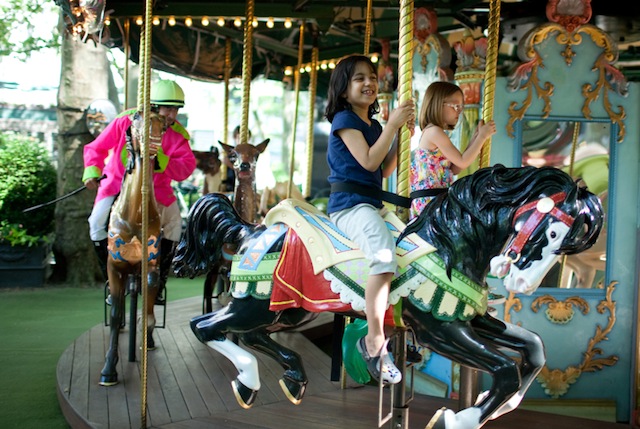 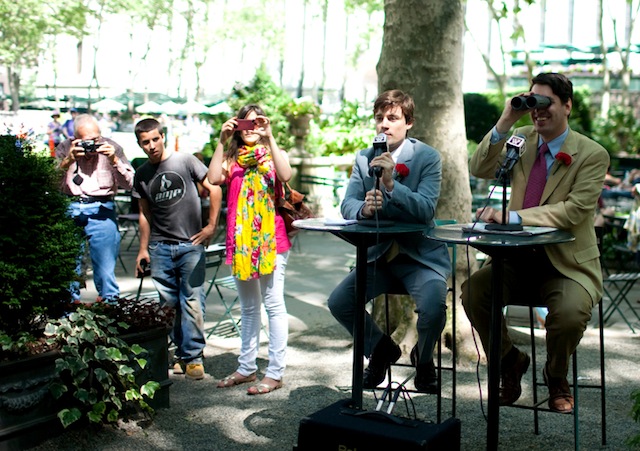 The carousel ride lasts two and a half minutes, which is also about the length of a typical horse race. The announcers went crazy for the finale as the crowd cheered desperately for their animals. 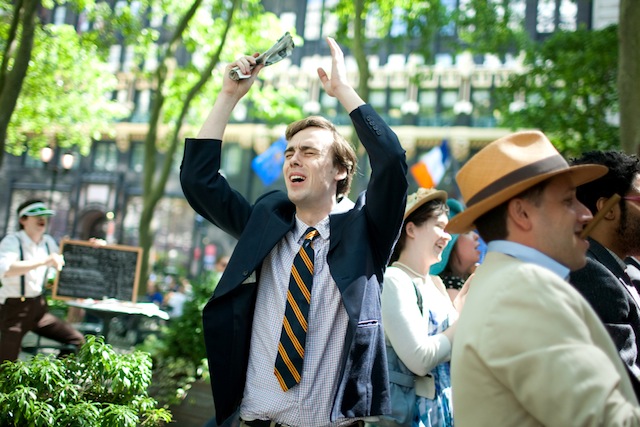 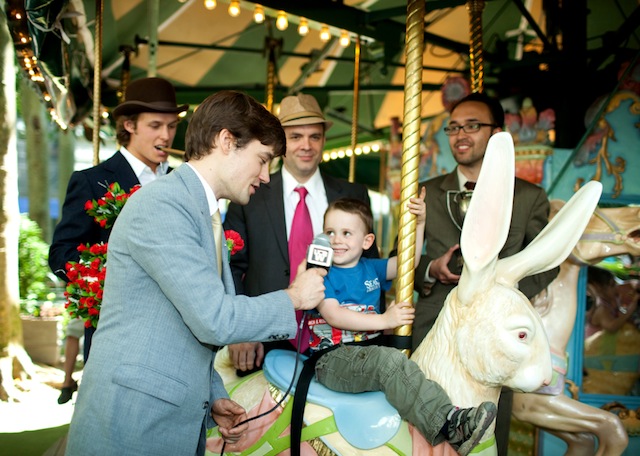 In the end, it was the rabbit “Carrots on the Brain” who pulled out the victory. The kid riding him was thrilled. Agent Rodgers went in for a post-race interview. 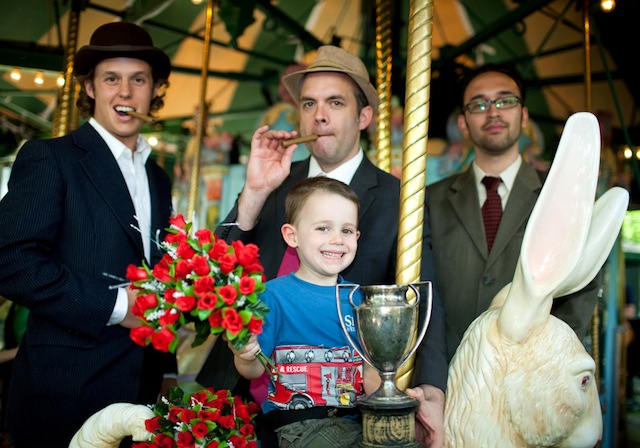 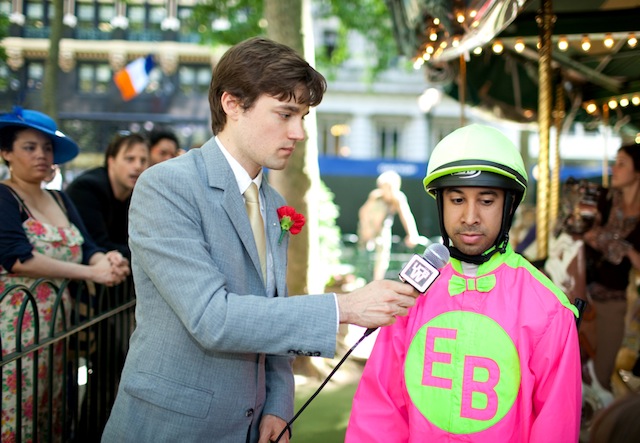 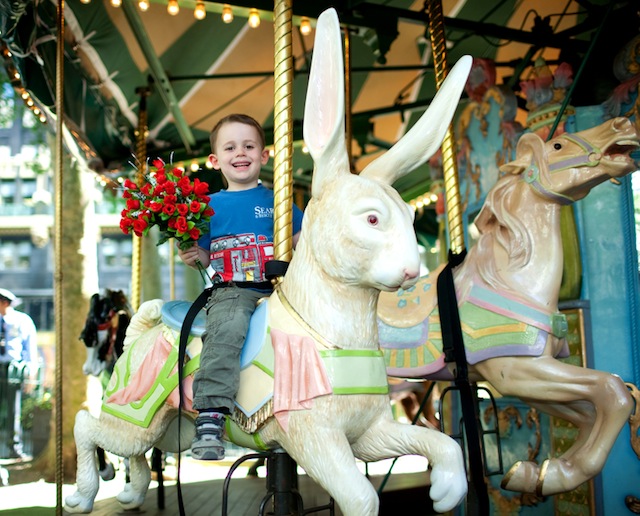 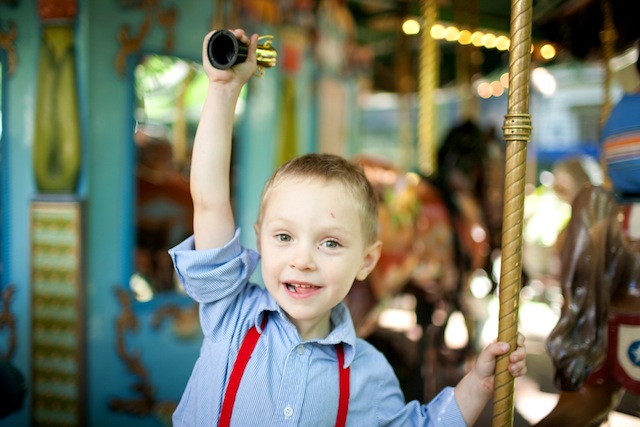 At the end of the race, we passed out little plastic trophies to all of the kids on the carousel. No one went away empty-handed. 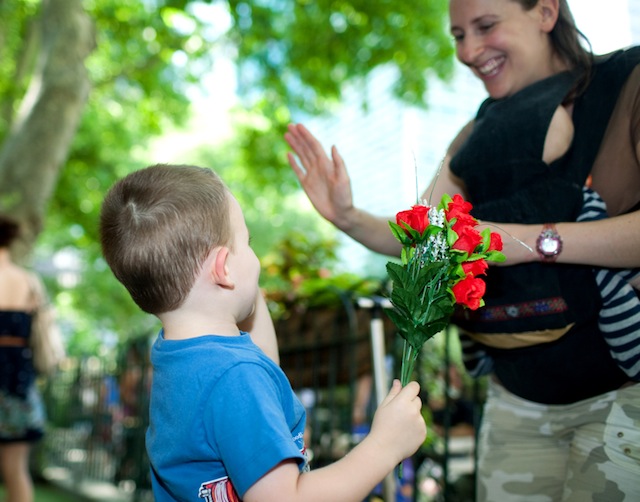 The winning jockey gives his mom a high five… 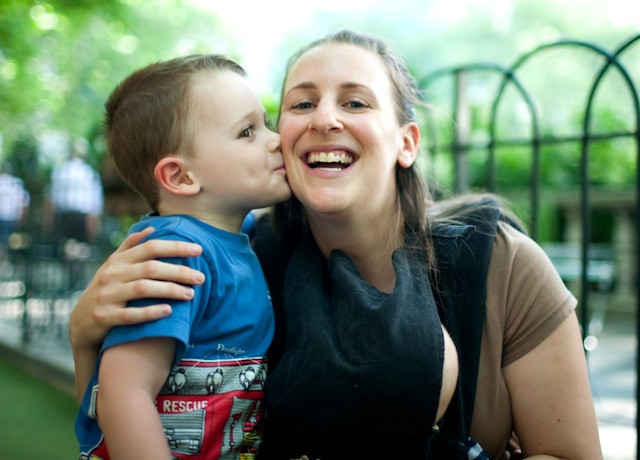 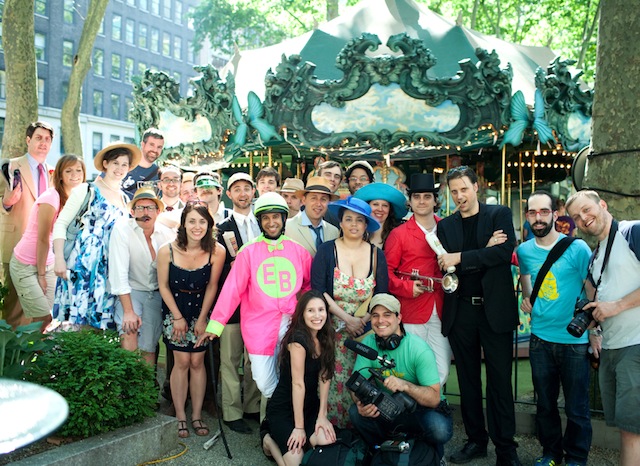