This project was faked for April Fool’s Day 2011. Check out the behind-the-scenes page to see how we pulled it off.

For our latest mission, we attempted to stage a sequel to our Star Wars Subway Car mission, using characters from Episode 1: The Phantom Menace. Jar Jar Binks entered a random train car and informed subway riders that he was scared that Darth Maul was chasing him. If things had gone as planned, people would have laughed and been surprised when Darth Maul showed up at the next stop.

Unfortunately, three men on the train decided to ruin the fun for everyone by assaulting our actor playing Jar Jar. We were not going to even post this mission, but the actor who played Jar Jar wants to press charges, and we are searching for information on the three guys who attacked him. We hope that someone who sees this video will know them personally or recognize their faces.

Here is the best photo we have of them: 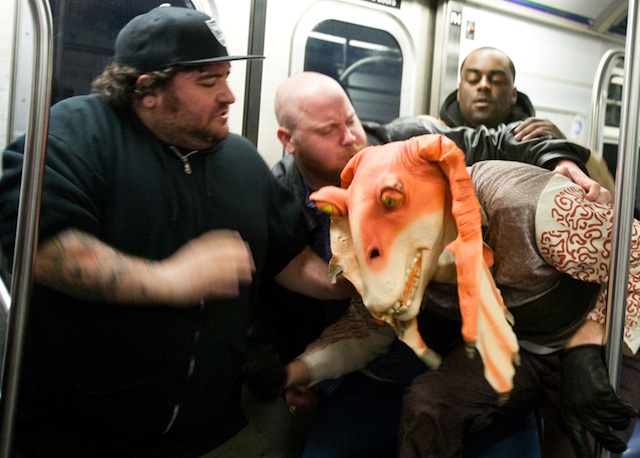 If you have any information, please get in touch with us, either via our contact form, or leaving a comment below. Thank you for your help. We’ll be back with a new mission soon. We’re not letting three idiots scare us away from continuing our mission to stage positive, funny stunts in public places.

And so this post isn’t a total downer, here’s our Star Wars Subway Car video to give you a laugh: